I received a warm welcome when introducing myself and posting a few pictures of my Peninsula 20.
So much so that several members urged me to post a build thread.
The tank is currently up and running, so the build part of the tank is more or less over...

But I do have pictures of more or less the entire build period, so I thought I would post the timeline of the build, just speeded up.
I don't really want to create one long post from start to current status, so I'll post different stages with a day or two apart.

The idea of this tank came to life while seeking motivation from an LFS owner here in Norway. At the time I had a Red Sea Reefer 525 XL that was going on 5 years old. A tank I never really enjoyed...
The 525 XL was my second reef tank, the first was an Aqua Medic Cubicus AIO I started in 2013.
I was much happier with the Cubicus than the larger and more advanced Reefer. But as most beginner reef tank keepers, we all want to try the larger tanks with sumps and fancier equipment.
So after a few motivational words, I decided to shut down the 525 XL and get the IM Fusion Peninsula 20.
I was able to give the livestock away, sell most of the equipment from the 525 XL, and give the tank and stand itself away to whoever wanted to carry it out of my apartment.

When the 525 XL was out, and some sorely needed cleaning where the tank had stood for the last 5 years was done, the time had come to start planning the much smaller Peninsula 20.

My main goal was that I wanted to be able to spend much more time with the tank, enjoying it more.
So I decided that I wanted a custom stand, just high enough so I could look straight into the tank while sitting in my recliner chair next to it.

The design stage started in July 2020 during the teardown of the 525 XL: 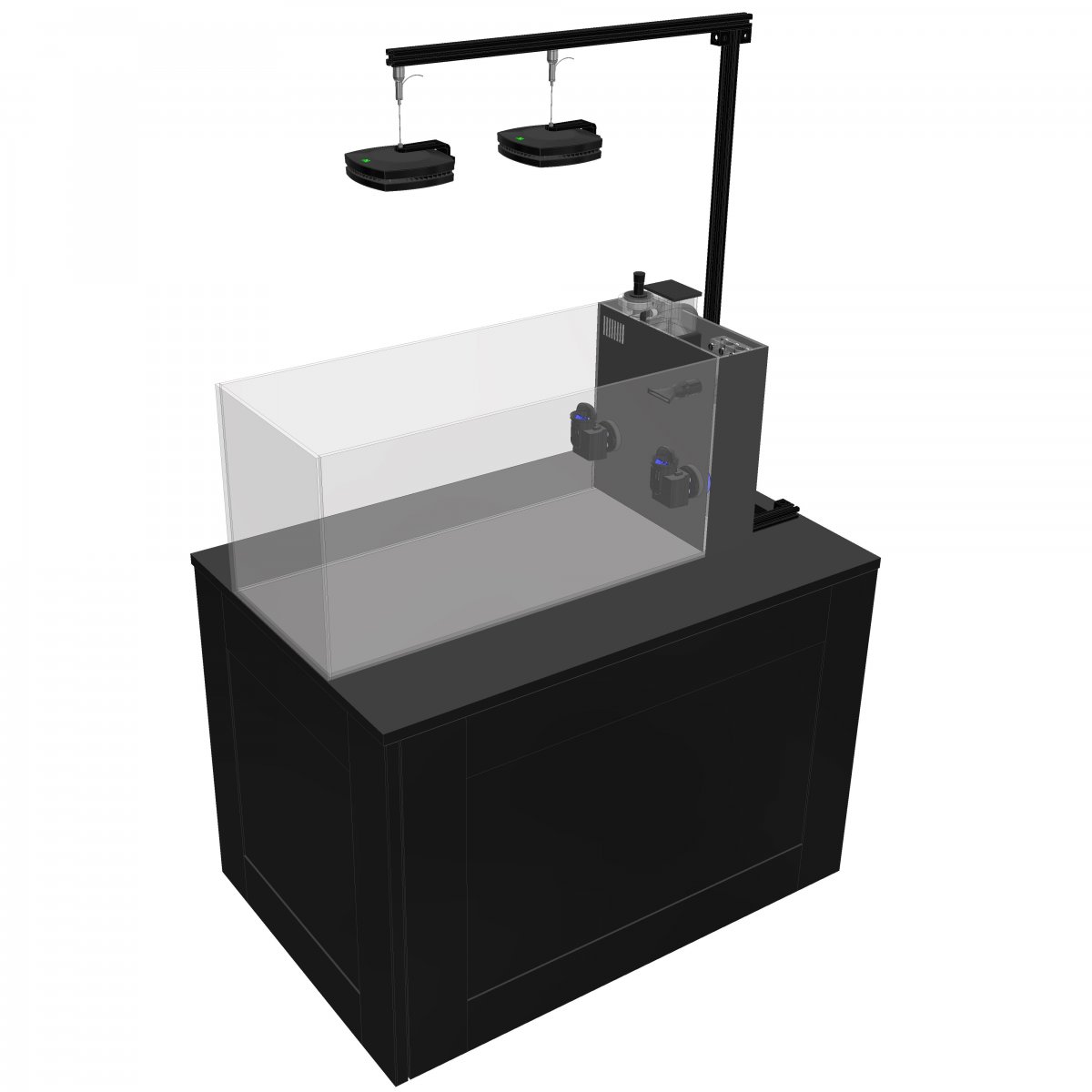 Please come back to see the next stage!

Curious how this comes together
OP

During the planning stage, the equipment list was as follows:

- Tank is an Innovative Marine Fusion Peninsula 20.
- The stand is custom built, purposely low in height so that I am able to enjoy the tank while sitting in my chair next to it.
- Return pump is Tunze Silence 1073.008 (one of few that fits the return chamber).
- Heater is AquaEl 50W (similar to the Cobalt flat plastic heaters you get in the US).
- Skimmer is the IM Nuvoskim DC Desktop skimmer (with DIY level switch going to the Apex).
- Reactor is the IM MiniMax Pro Desktop reactor.
- Powerheads are 2 pcs Tunze Nanostream 6020.
- Lights are 2 pcs AI Prime 16HD's.
- ATO by Tunze Osmolator 3155, slightly spiked with kalkwasser.
- Aquascape out of RealReef rock.
- And an Apex 2016 with 2 pcs EB6's that came from the 525 XL that monitors pH, salinity, and temperature, and controls some of the gear based on inputs...

The stand got built during August 2020, after the 525 XL was out and I painted the wall behind the tank (thank you, double-sided tape lighting cable ducts ). 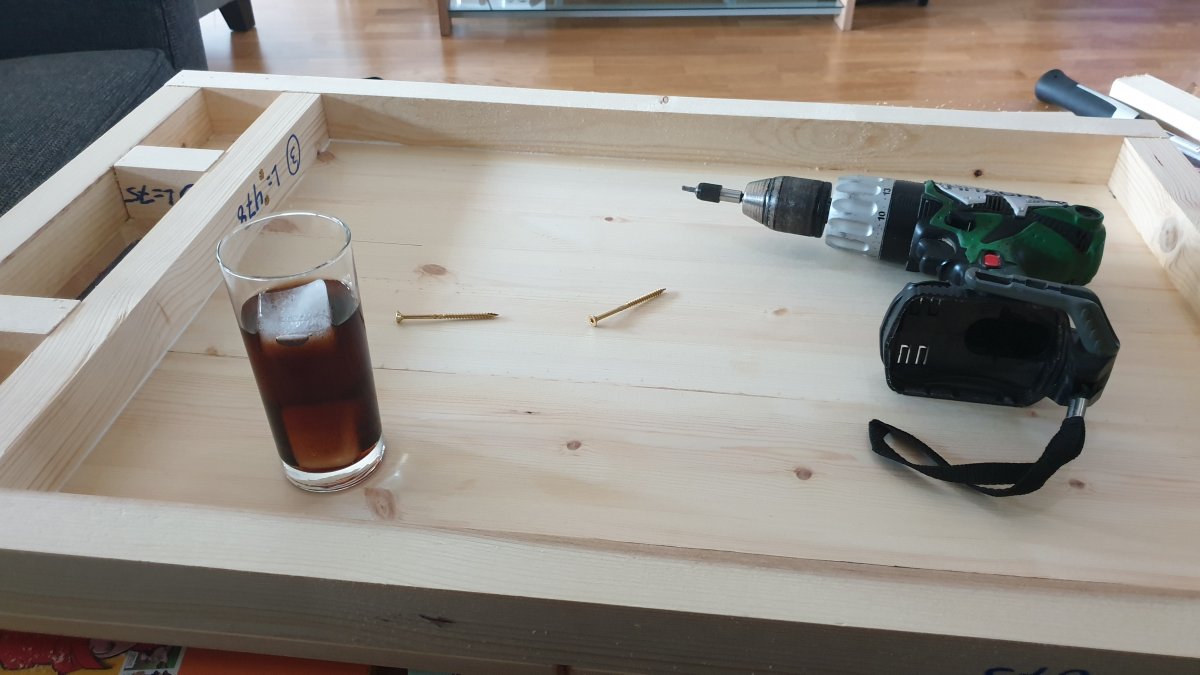 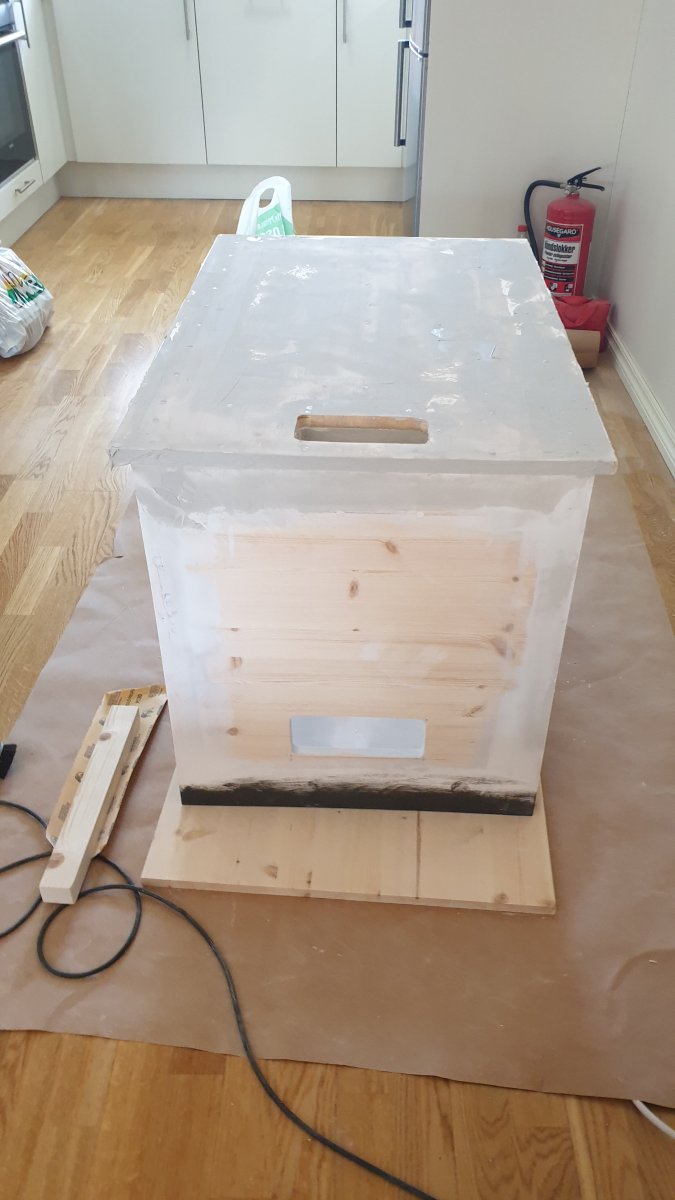 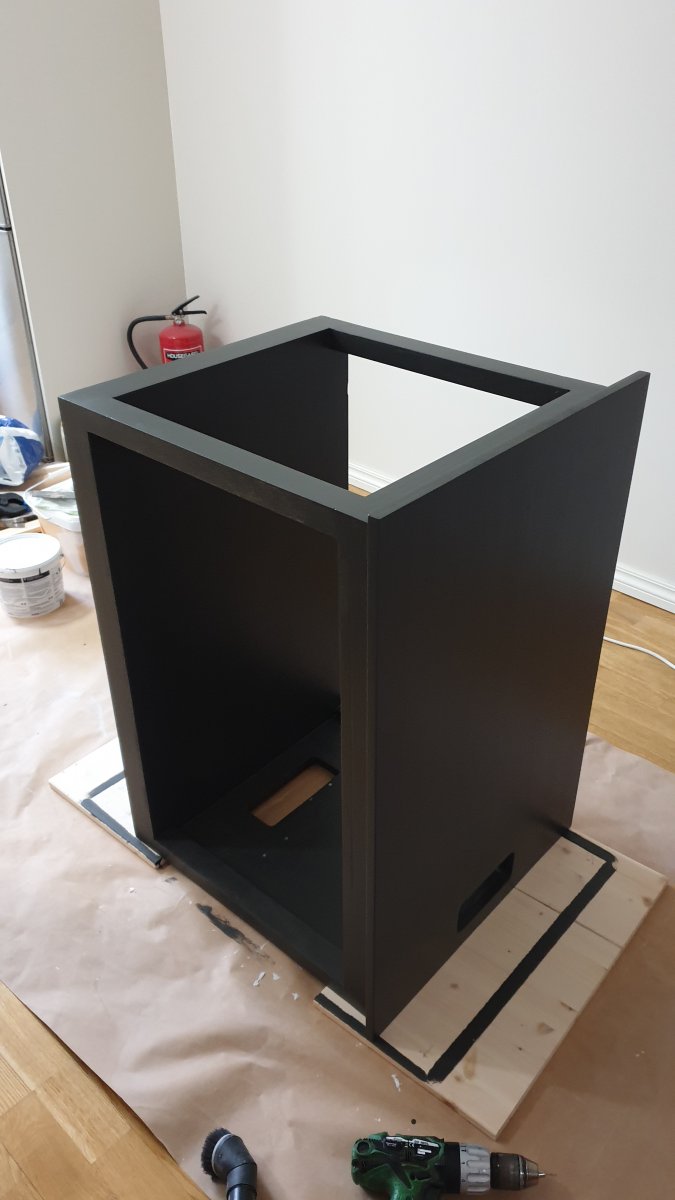 Just the height I wanted. 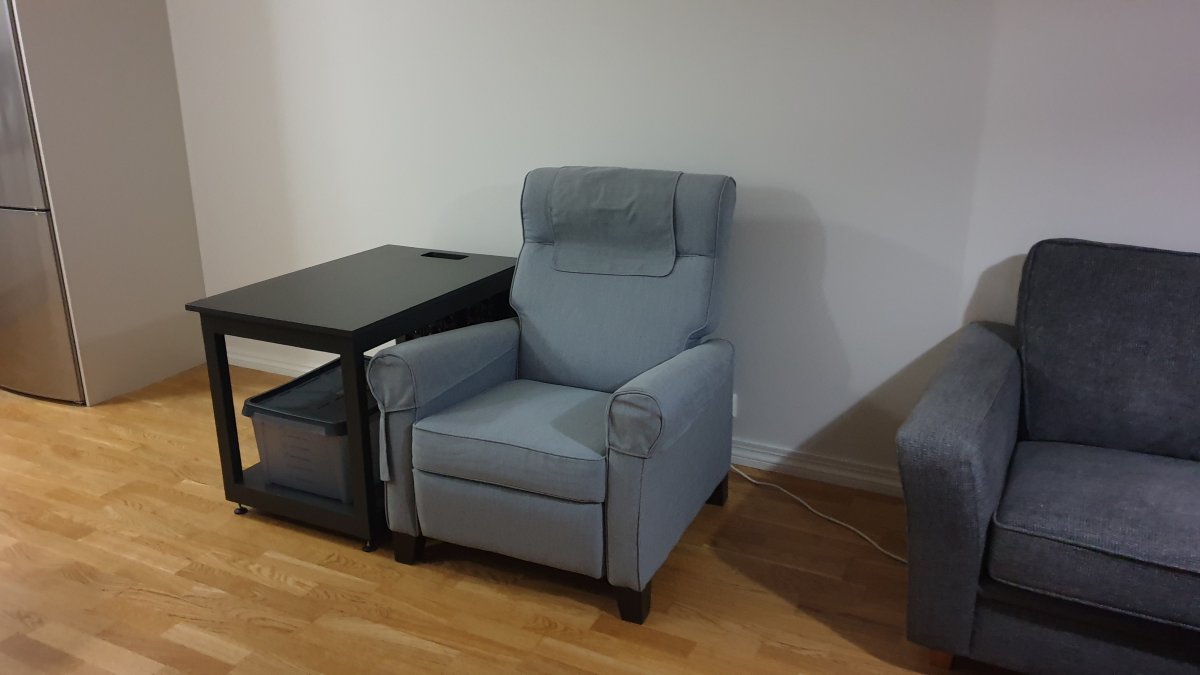 Some Apex stuff mounted, and ATO reservoir in place. 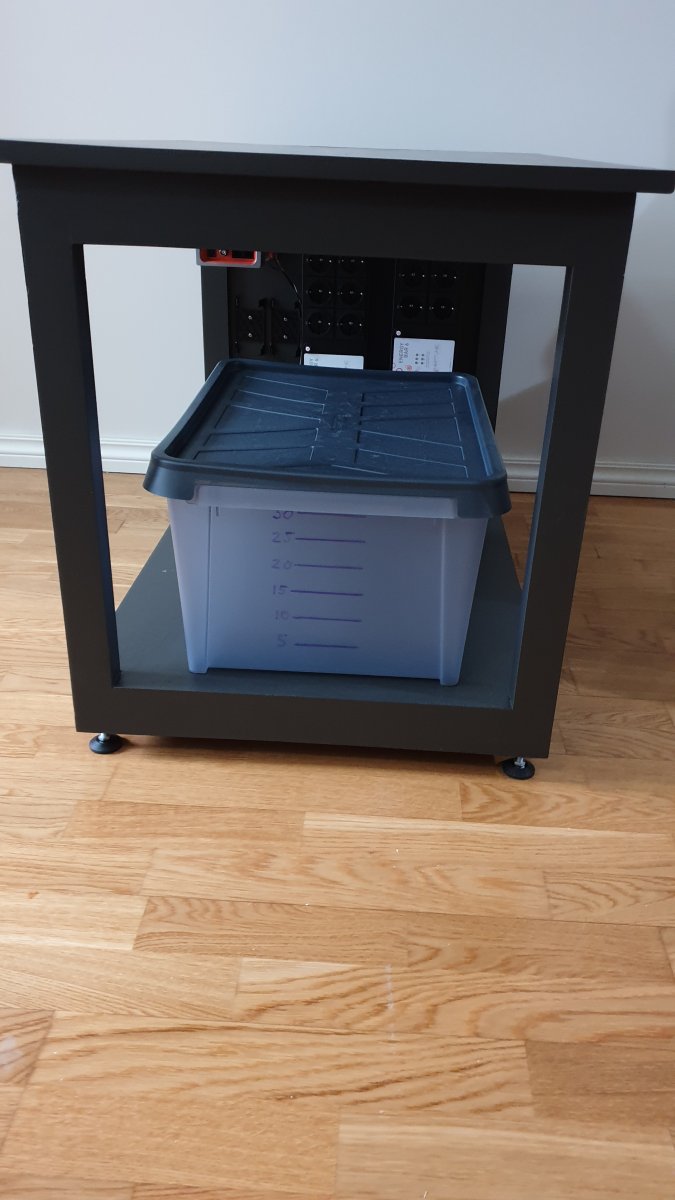 Tank and aquascape in place. 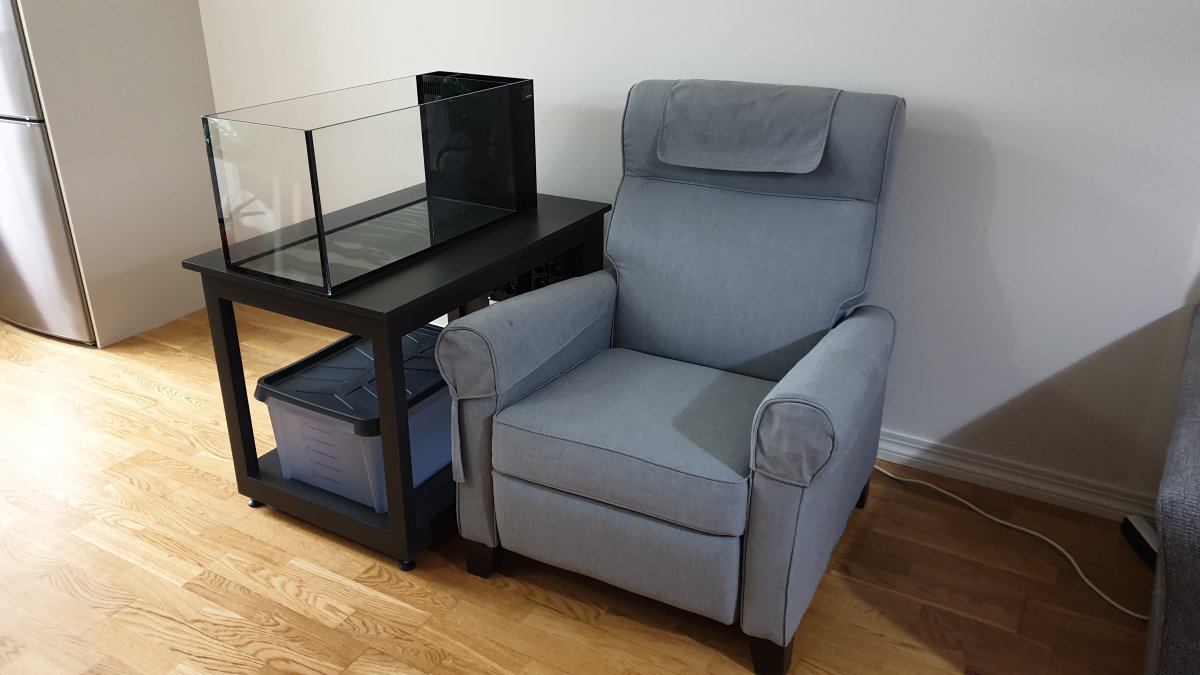 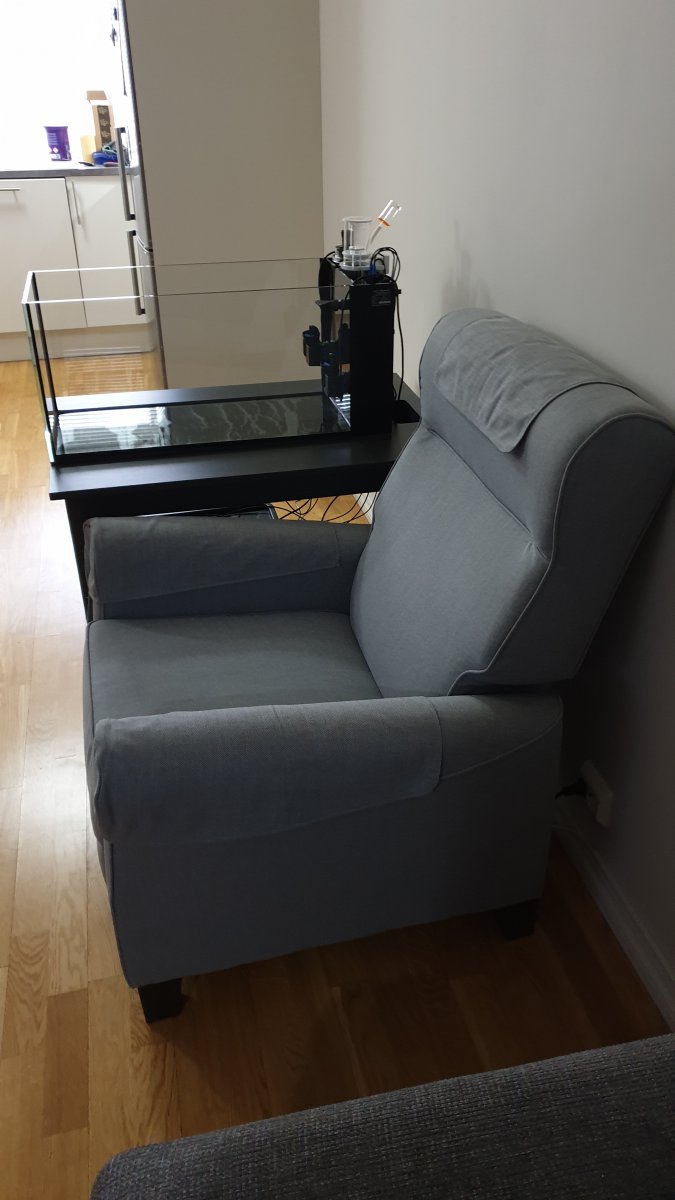 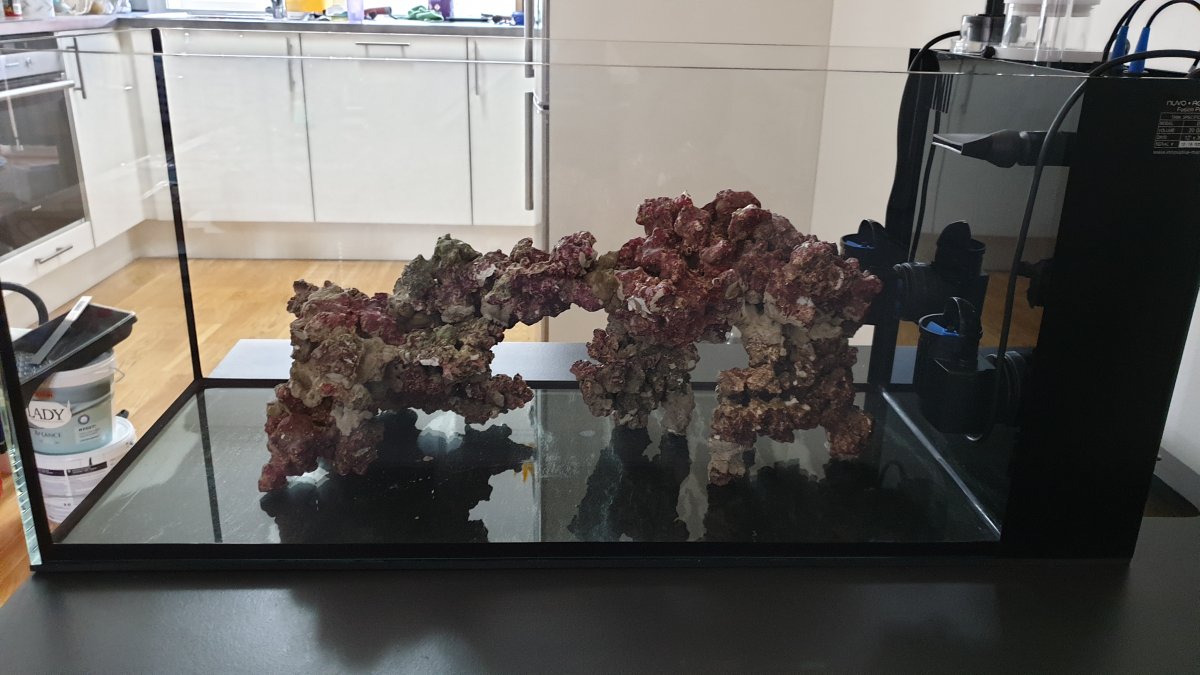 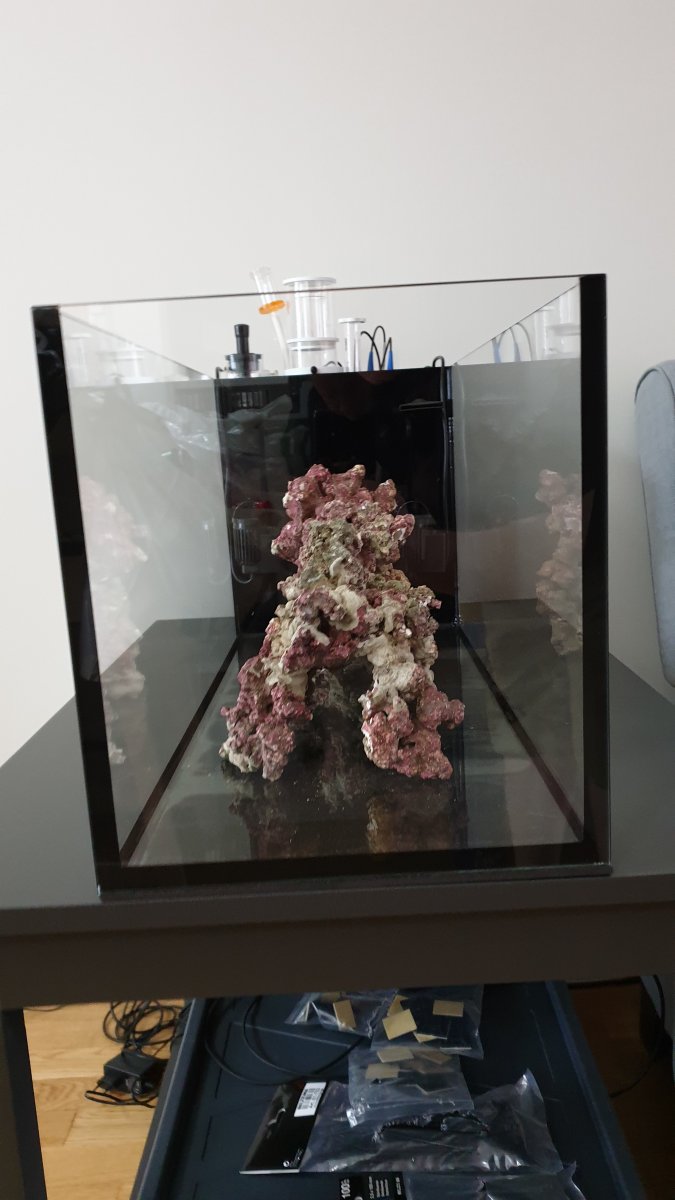 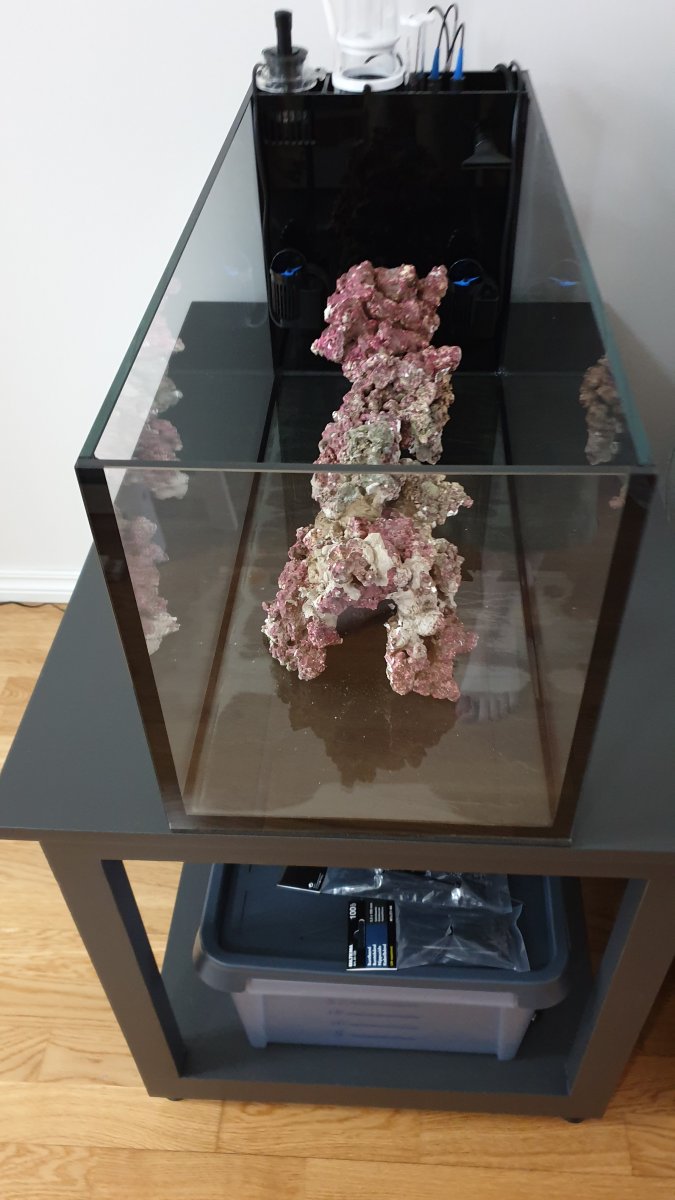 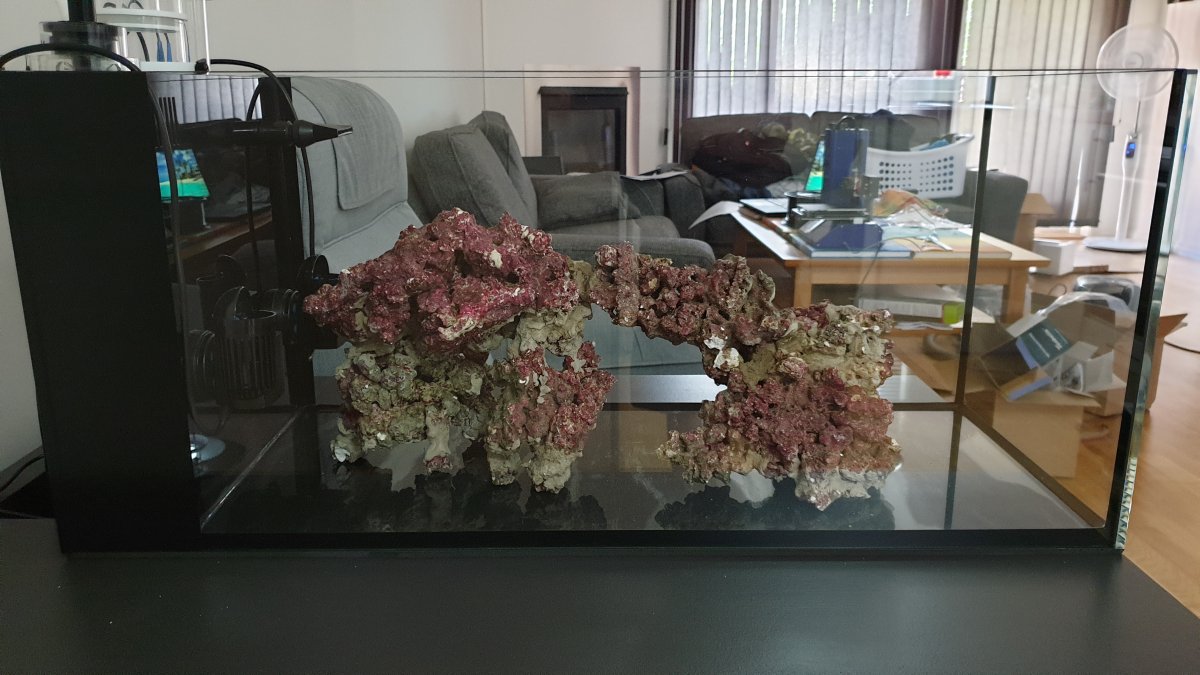 Very nice build! Looks like a nice spot to relax, following along
OP

By the way... The latest post has the smallest IceCap skimmer in the tank, as this was recommended to me...
And it left like 12mm (1/2") more space in the rear "sump" than the IM NuvoSkim skimmer.
OP 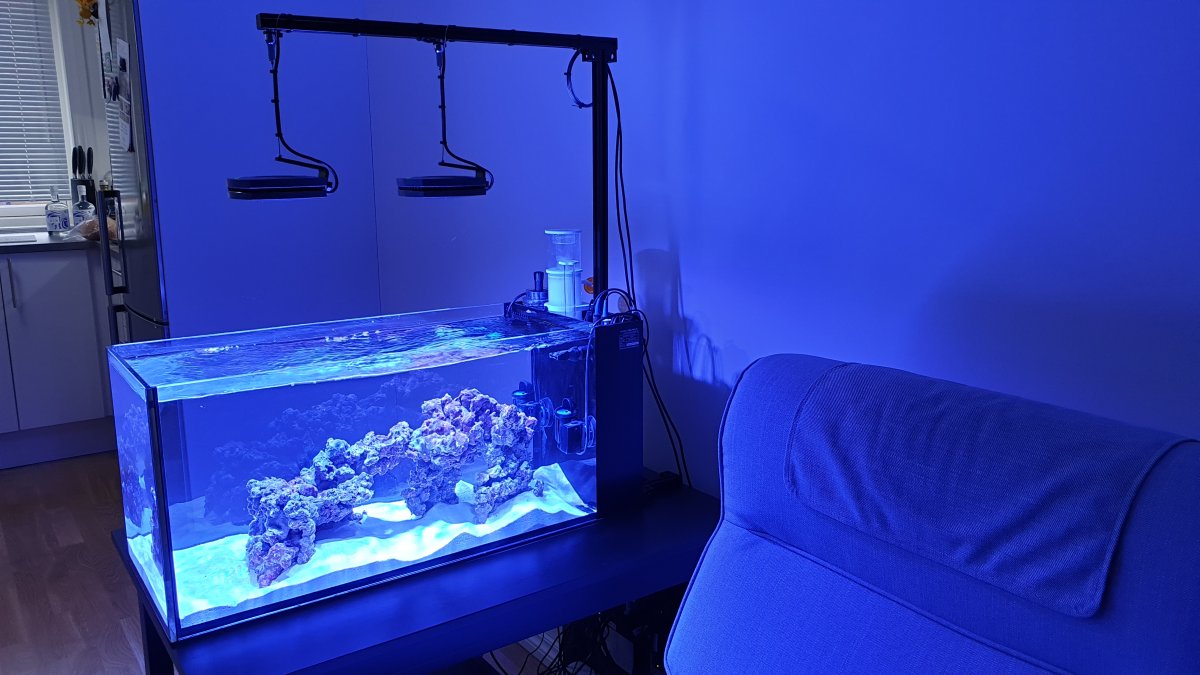 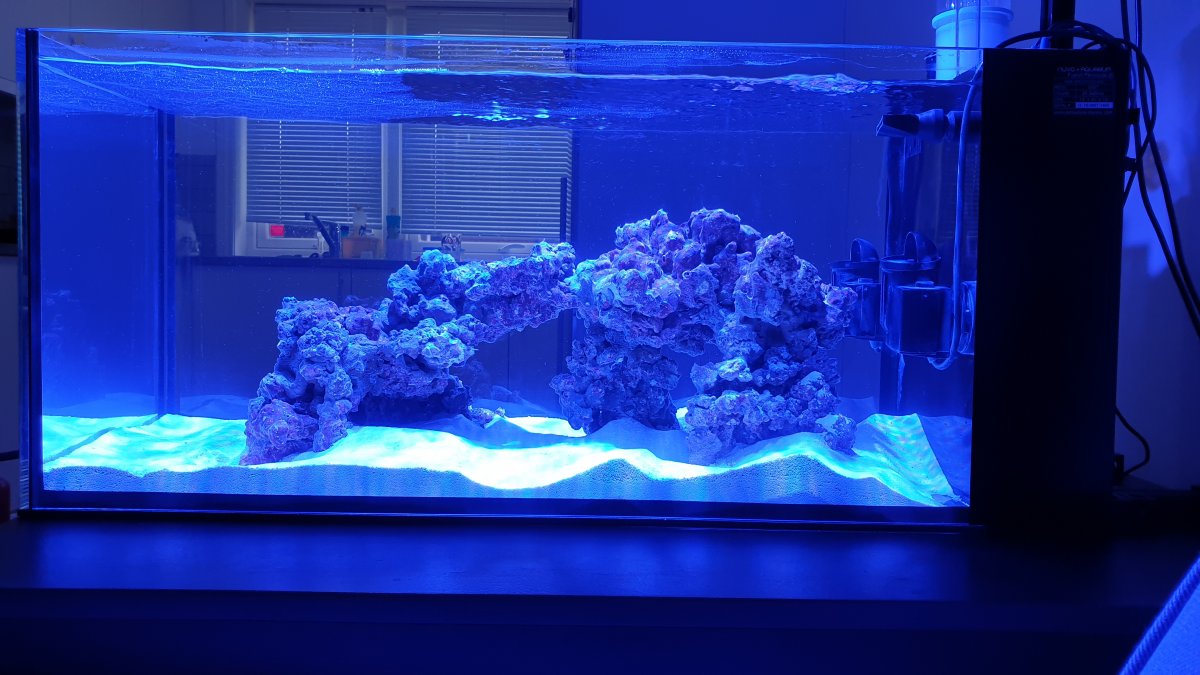 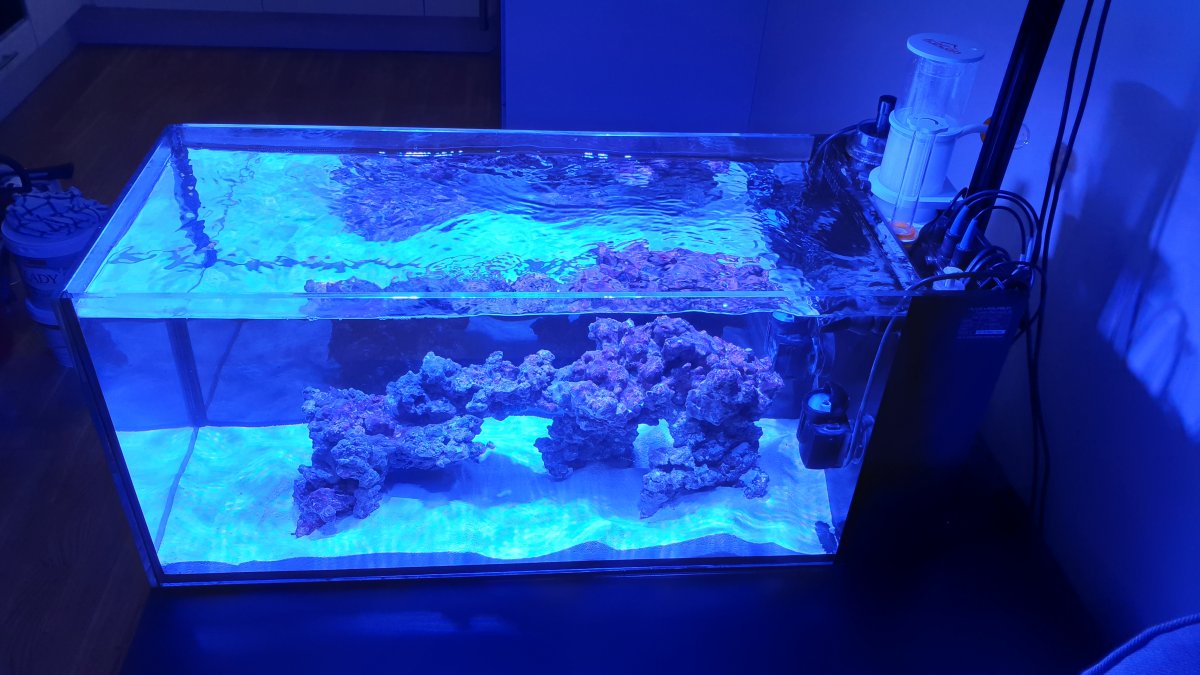 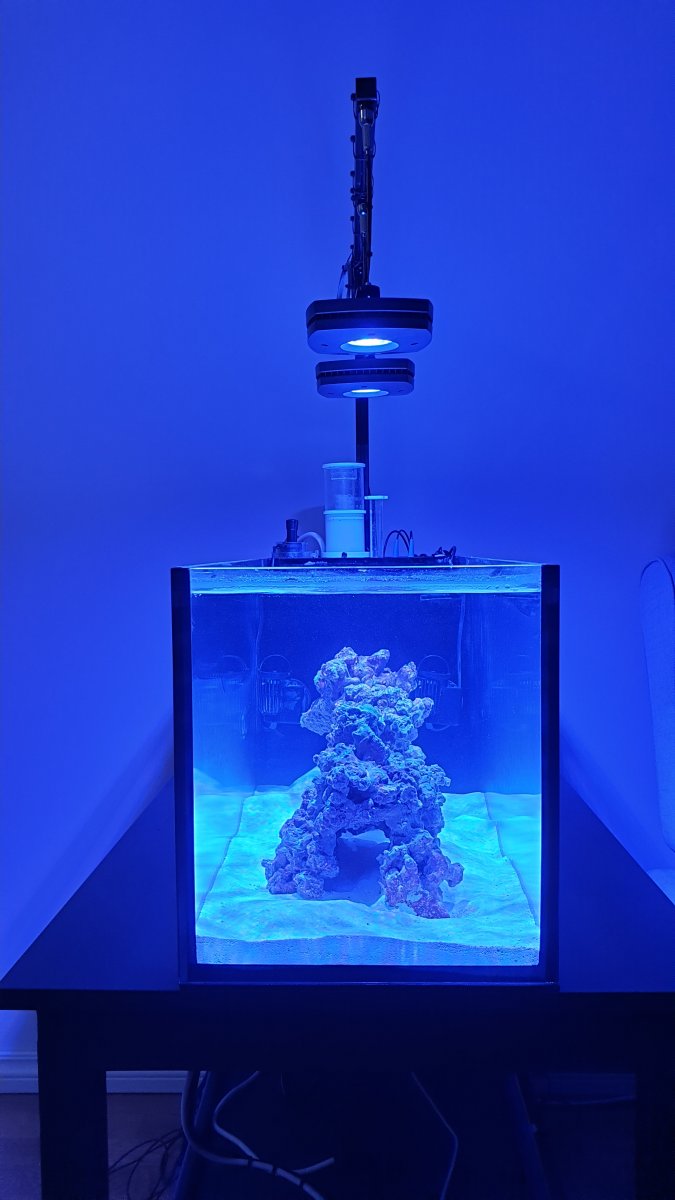 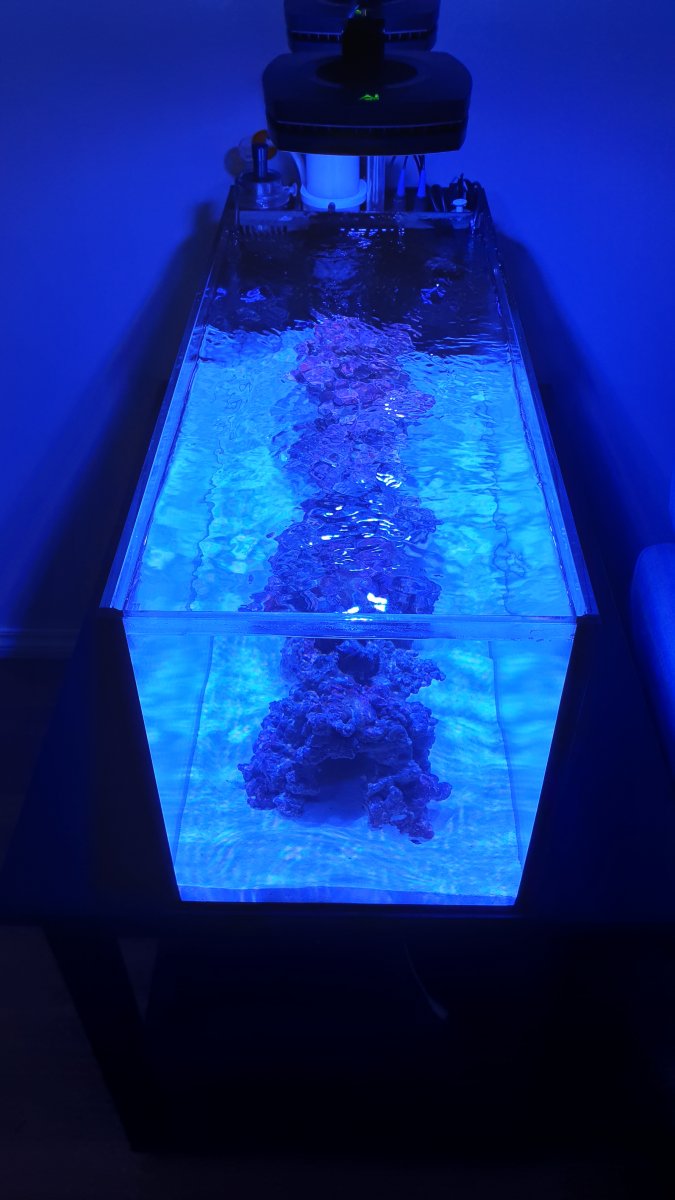 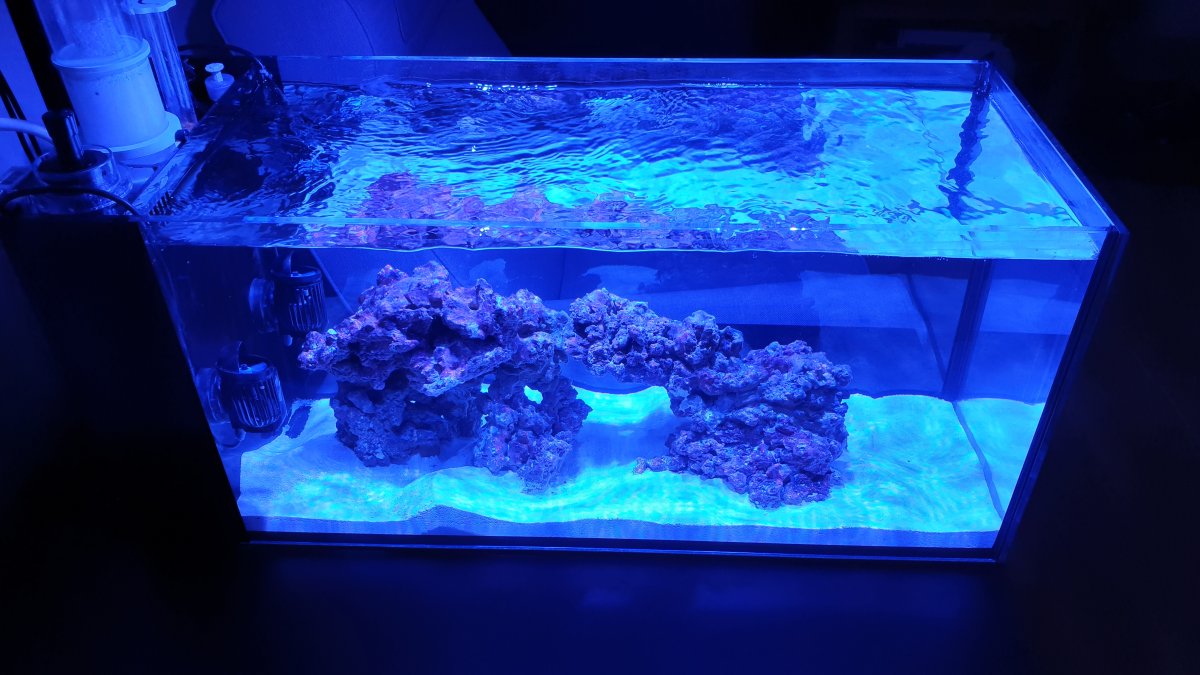 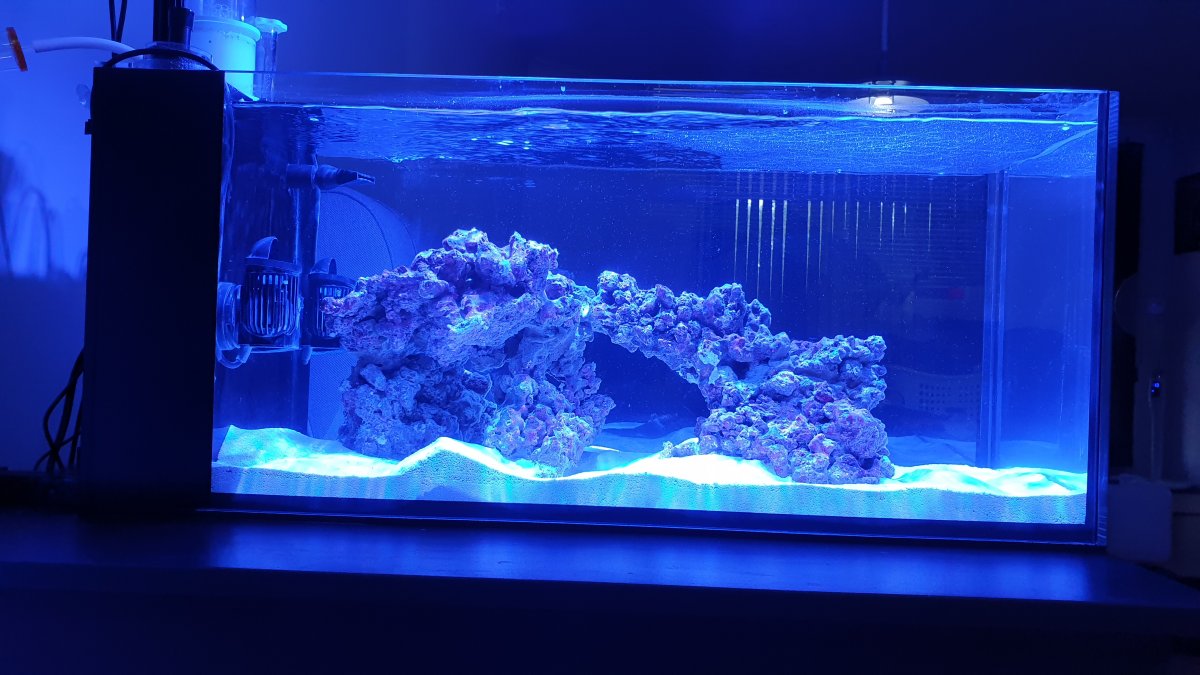 An adult beverage for the hobbyist, and a decent sized shrimp for the bacterias in Brightwell Aquariums MicroBacter 7. 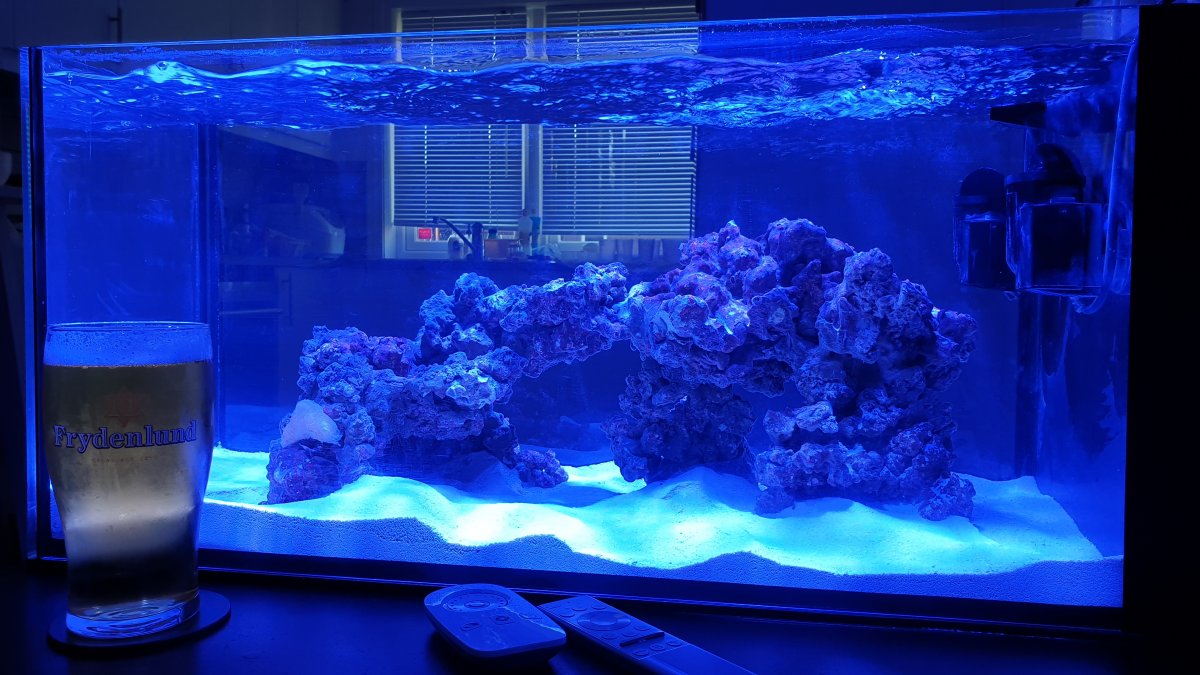 I can tell the experience behind this project already
Did you make the 3d model? There are some details in it!

Aqua Splendor said:
I can tell the experience behind this project already
Did you make the 3d model? There are some details in it!
Click to expand...

Yes, I made the 3D model myself.
I've been working as a mechanical design engineer with the same 3D software for 20+ years now, so the modelling part was pretty easy (not to toot my own horn).
If you continue following this thread, you'll see some custom brackets etc. I had to design and 3D print because of the extremely narrow rear sump.
Those files will of course be made available for those who would like to 3D print any of them themselves...
OP

After about a month of cycling, the standard Oscellaris clown pair and some tester corals are in the tank by the beginning of October 2020. 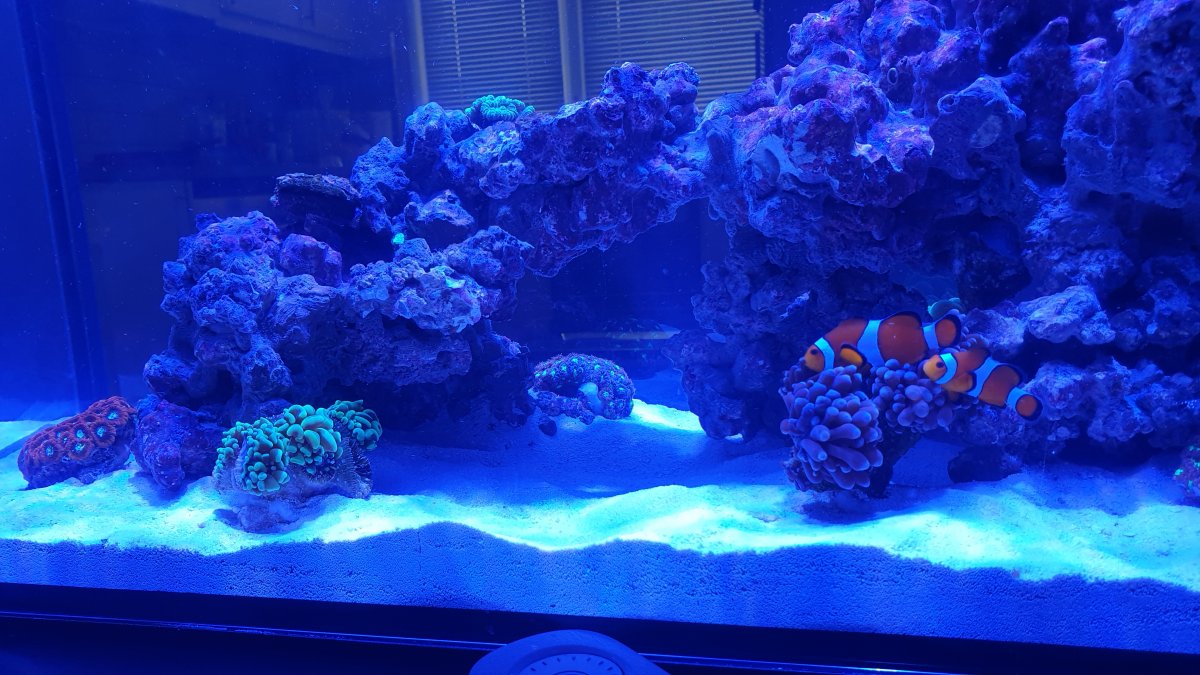 It still impressive you took that time to make all those 3d models, it's not a 1-day job!
Is it AutoCad? Fusion, solidedge? Don't know well the 3D engineer soft.
OP

Aqua Splendor said:
It still impressive you took that time to make all those 3d models, it's not a 1-day job!
Is it AutoCad? Fusion, solidedge? Don't know well the 3D engineer soft.
Click to expand...

I'm using Autodesk Inventor Professional.
Of the softwares you mentioned, it's most similar to SolidEdge, but it's made by the same company as AutoCAD and Fusion...

PP Reefing said:
I'm using Autodesk Inventor Professional.
Of the softwares you mentioned, it's most similar to SolidEdge, but it's made by the same company as AutoCAD and Fusion...
Click to expand...

Still in the beginning of October.
Not sure about that oolite size sand. Blowing around everywhere...
It looks great when brand new (and in its intended place), but I hear it grinding through the powerheads. 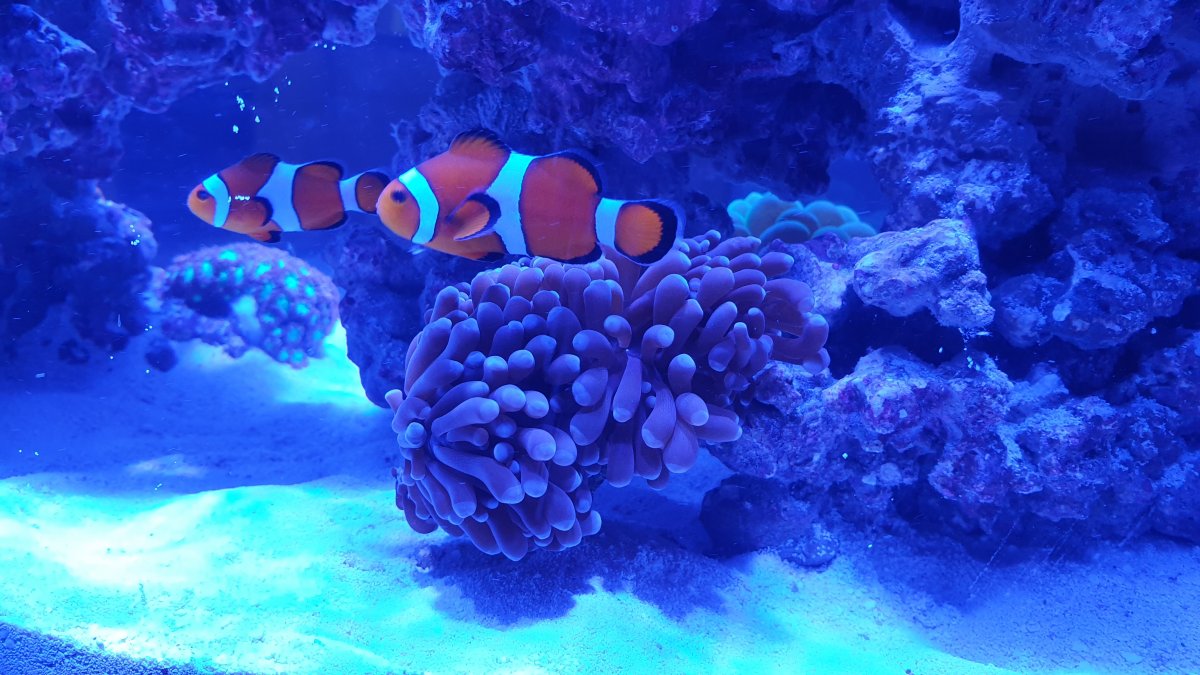 Also, the 3rd fish introduced, Linear Blenny (Ecsenius lineatus). It's hiding behind the puckered up Euphyllia Ancora.
After getting it, I read this on LiveAquaria: "may nip at the polyps or bases of Acropora sp. and other SPS corals. These fish may damage Acropora sp. and Montipora sp.".
Although I'm not going to have any Acropora corals in this tank, I will be having Montipora corals... 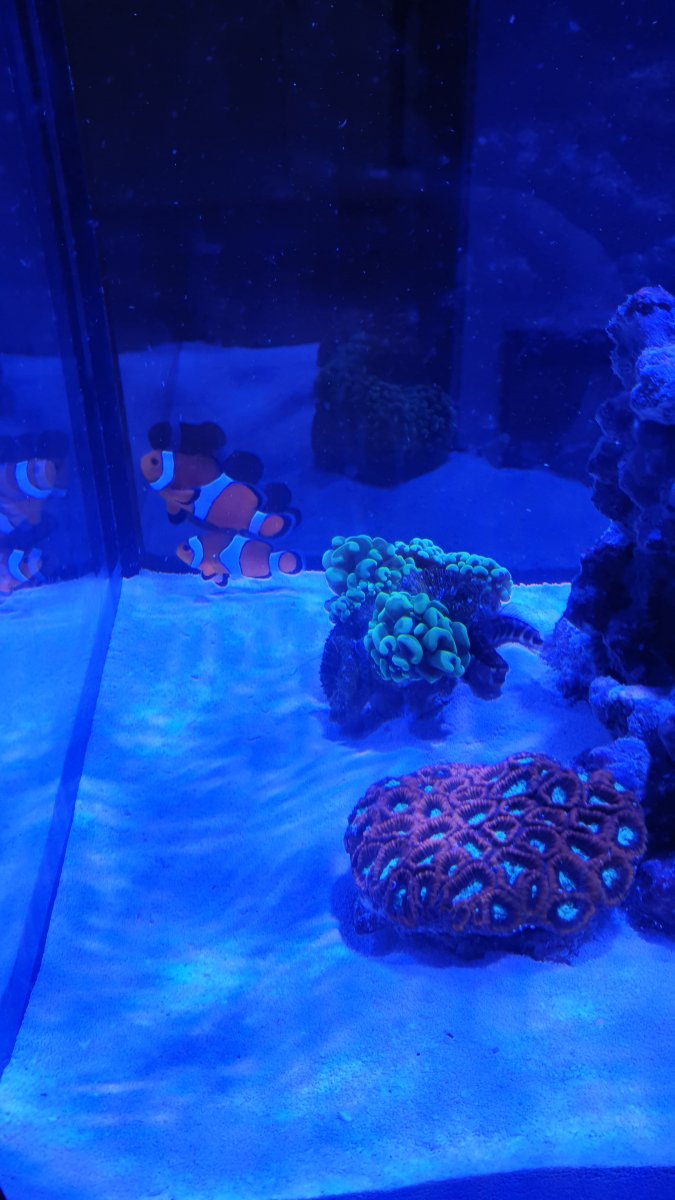 So after a while with running kalkwasser in my ATO water, I didn't see the parameters I wanted.
pH swings were crazy, from 8,0 in the morning to 8,9 in the evening.
Alkalinity was so-so at 7,5 to 8,0.
Calcium was close to 500.
Magnesium was above 1500.
The kalkwasser powder I had been using was Brightwell Kalk+2.

So I decided to dose kalkwasser in a more controlled manner, using a single-channel D-D P-1 dosing pump.
That meant I had to make a new bracket for both the ATO hose, and the airline tubing I used from the dosing pump.

After some quick measuring, I made a 3D model of a combination bracket for both the 6mm airline tubing from the dosing pump, and the slightly larger diameter hose from the Tunze Osmolator pump.

Bracket with long radius saddle to avoid kinks in hoses: 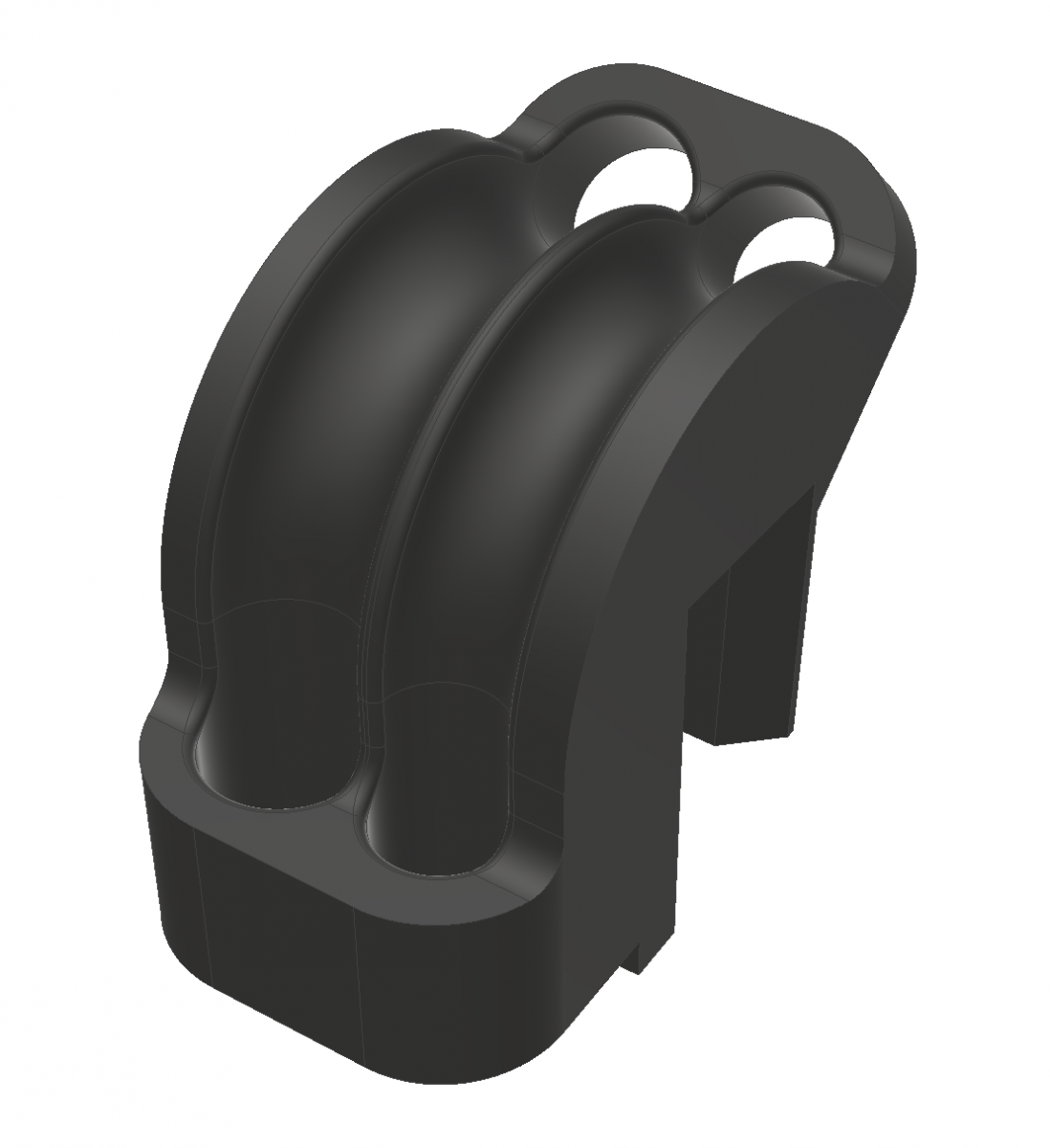 Should be able to fit next to the reactor: 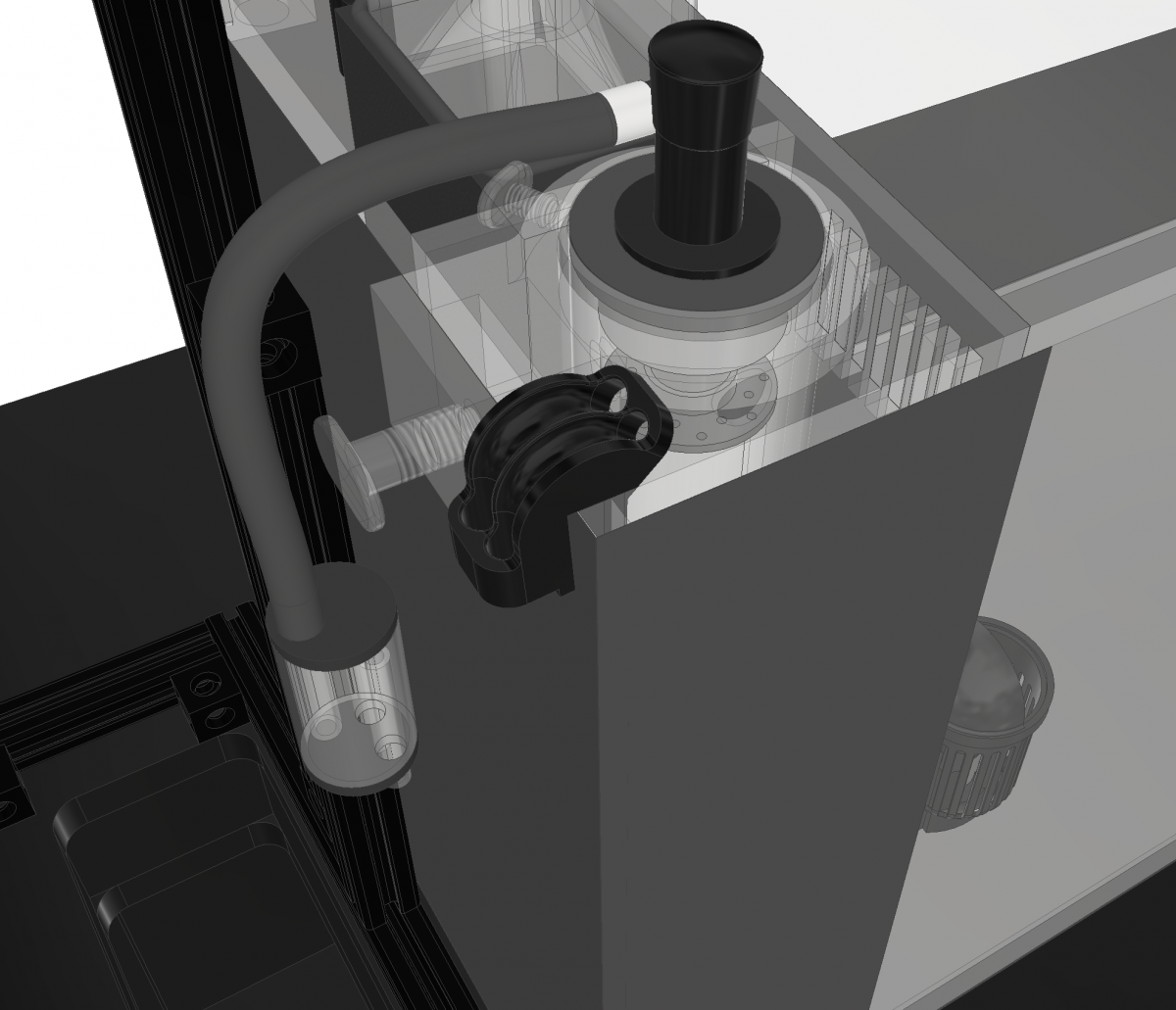 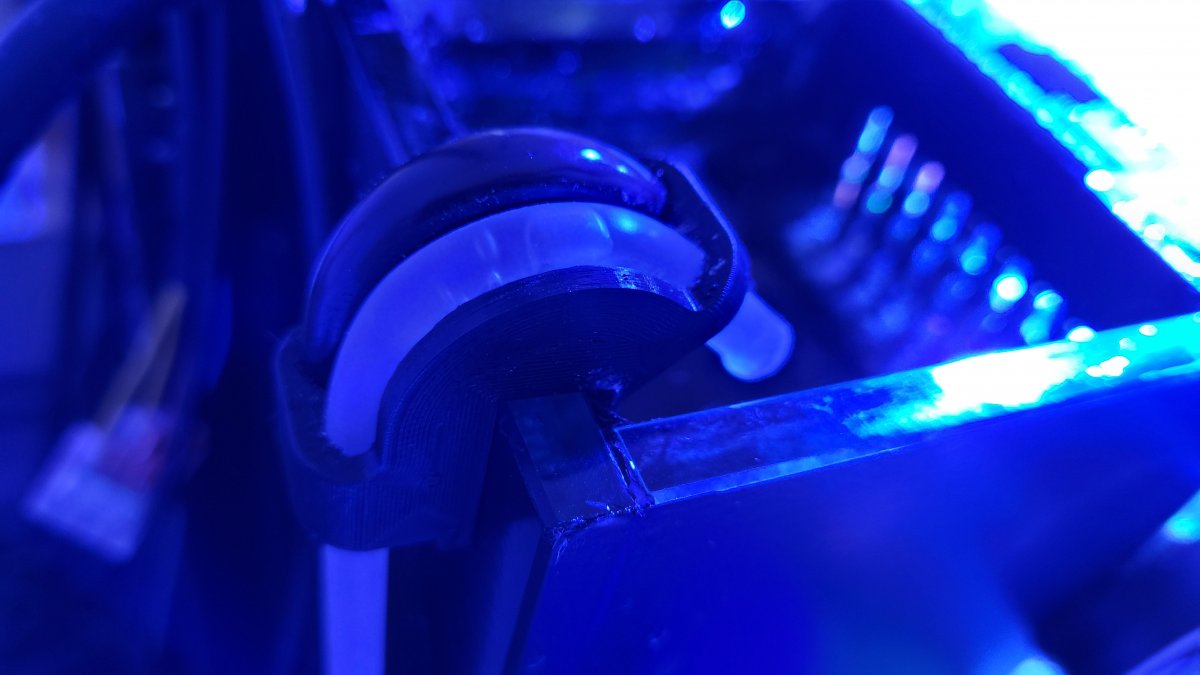 Don't worry about the air bubble in the hose from the doser, I had just pulled on the hoses and some air got sucked in. There is no air in the hose when the doser is running its schedule.

Top notch build quality on everything. Love the CAD models, when I build stuff I just wing it.
OP

WDKegge said:
Top notch build quality on everything. Love the CAD models, when I build stuff I just wing it.
Click to expand...

Thank you.
I blame the nerd and gadget-freak in me!