So I have been battling ich on my Hippo basically since I got it and botched TTM. Anyways, I had it beat for a while, then it scratched its eye scrambling into cover which caused it to break out right before my vacation. Lfs took the fish and treated it, fixed the eye and everything. Shortly after I got it back, it broke out again. Presumably due to the stress of moving. It cleared up after a couple days and was fine for about a week. Now it has what looks like a torn fin and scratches on its abdominal area. That, or a handful of large ich spots. It's hard to tell this fish runs and hides anytime I get near the glass. I'm thinking scratches because it's new hidey hole is wedged tight in between some rock and the glass, and the marks are on the side it has toward the rock. Even my lfs tells me this is the most skittish Hippo they have ever seen, even before I bought the dang thing.

So what, if anything can I do to get this fish to chill out? I feed it nori, usually eats a sheet every 1.5 days, brine, spirulina, mysis, omega one flake and sometimes it takes the vitalis algae pellets. Plenty of hiding spots. It's fine until it gets stressed by hurting itself from being so dang spooky all the time. Not like it's housed with anything overly aggressive. An eel that sits in a cave until it's feeding time. A marine betta that casually floats around the tank. A tiny maroon clown that rarely ventures far from the skimmer intake, and one black Molly.

I'm really debating just calling it quits and surrendering it to my lfs. If I can catch it, it's like blue, greased lightning.

It's also frustrating because my new security camera shows this fish cheerily swimming about, doing tang things, until I come into view of the tank, then poof, gone. Unfortunately resolution is too low to catch any details of spots. 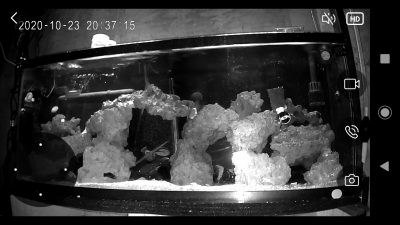 Hmm, there's plenty of cover for the fish. And it doesn't come out during feedings? Have you tried just...sitting in front of the tank for hours on end doing something calm (ex. knitting, reading stuff on your phone, etc.) to see if it comes out or not?
OP

Feeding yes it does come out, but if I move a muscle, it's gone. Same with sitting by my tank for hours. Eventually comes out, but if I so much as shift position, it takes off. Not that I have a ton of time to spend by my tank these days. Essential Service+horrendous OT hours.

Not always into its hole in both scenarios, but even just behind some rock or other to break line of sight. Even witnessed it poke its head out to see if I was still there and slide back. Like a gopher.

...you didn't try to play whackamole with it did you?

I've honestly never encountered a fish as utterly problematic as this tang. Multiple rounds of ich treatment only for it to get another infection a few days later, skittish as heck...at least it eats? In my opinion, this fish has caused you a ton of grief; it might be the time to just trade the fish in with your LFS for a fitter, friendlier fish?

If I’m reading this correctly, the tang is not your problem. The ich in your system is the problem and will always be present until you go fallow.
OP

I'm aware of that, was hoping to manage it, as do many folks. And I am, for every fish except that one, and even it only gets it when it stresses or injures itself. Even the freshwater mollies I kept didn't get it. Still haven't, even after I removed them into a smaller, less established salt system.

Looking more so for suggestions if there's anything I can do to help settle it down, I've seen tonnes of relatively chill Hippo tangs. Tangs with a lot less space than this one does. But at least it is eating, and eating pretty well from what I've seen. Certainly more than any of my other fish eat except the eel.

....y’know, I’ve been following your joirney with this fish for so long I forget that this isn’t like common knowledge haha. The only thing I can think of, is to have a school of dither fish. That, or all of the constnat moving, treatments, etc. have caused your fish to recognize you as the main source of its stress, and thus it avoids you....something that really only time can heal. And blackworms.
OP

I could put some of the mollies back, though they were bullying the other fish, stealing food, hence why I took them out. Tangs behavior was pretty similar with and without them, but could give it a shot.

Would love to get some Chromis or something, but the nearest store that has them is a 500km round trip on a highway that is kindly referred to as the "Highway Thru Hell" during the winter, which we got early. Even has its own TV show about all the accidents.

I've been kind of worried that is the case, and would certainly explain it's behavior, but not that it's been this way pretty much since Day One. Definitely won't rule it out.
OP

This is where it takes cover. Took me 20 minutes of looking the other day because I was worried it jumped during tank maintenance and couldn't find it around the tank. 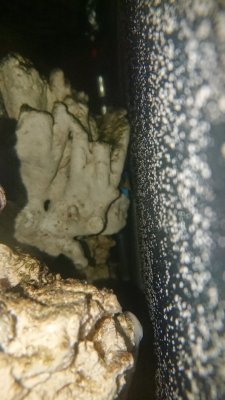 I would say there is no dither fish. Mollies seem kind of spazzy to me, I would probably use something else. Fish that are calm but also good feeders and greet you at the glass begging you for food may eventually give your tang the idea.

It will probably take awhile to trust you. My Kole Tang I had was super skiddish and when I had to catch it for something, it was flippin terrified of me for awhile after. My butterfly fish will shake their heads and practically swim into my hands but some tangs seem like chicken *****.

For ich managment, this fish would probably benefit from live worms (you can culture white worms yourself easily) and live clams and a bit of selcon or fish oil added to its dry foods.
Last edited: Oct 26, 2020
OP

Interesting about cultivating the worms though. Real trick would be finding the live ones to start with.

Interesting about cultivating the worms though. Real trick would be finding the live ones to start with.
Click to expand...

Well, here you can buy white worms on ebay. You only need a small amount to start with and you just grow them in a small plastic tub with potting soil and feed them bread or cat food and keep the soil moist and that is it.

I would think someone there has these things since they are food for all sorts of amphibians/fish, etc.. 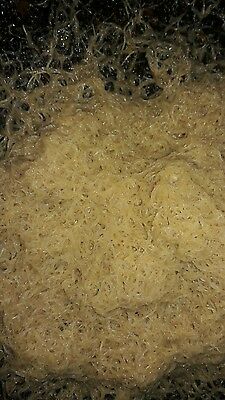 WHITE WORM Starter colony. white worms are easy to raise, and your fish will love you for doing so!
www.ebay.com

Also a large/appropriate UV may help keep the numbers of ich down.

if you want a friendly and personable fish get a butterfly. all 3 i've had were extremely friendly

i've had a heniochus for less than a week and it ate from my hands tonight. really friendly

How old is your tank? It looks very white and newly set up.

Personally, if I started a tank with all dry rock, I’d want it to be a year old before I tried a Hippo Tang. Ich sensitive fish are always going to do better in a more established tank. The back and forth results with the LFS just reinforce my belief that the environment you are providing is not yet up to par for it
Last edited: Oct 26, 2020

Part of the issue appears is the ick has gone away temporarily. In their cycle, they release cysts that seek a host being your fish.
When you see them again, they have become adults which you can see with the naked eye.
You may need to a continuous treatment but best in a quarantine tank.

Those cuts and scratches are not making the ich come back, it is the ich making the fish scratch itself. And everything you are describing is a sick and stressed tang. And all that darting around and hiding is what they do when they are stressed and sick.

I completely agree with Miller. The fish has been through a lot by the sounds of it and hasn't had a chance to settle. You then add the fact that it's a super sensitive fish to parasites and it's in a tank that is known to have them, plus has a skittish nature because it's been in and out of the tank, and you have a recipe for disaster.
Some of the scratches will likely be it scratching from the annoying parasites but these are a fish that wedge themselves in the rockwork to feel secure and if it's feeling ill, it'll just stay there. With a surprised immune system you also commonly see bacterial infections taking hold, so watch out for any red streaks to the body and fins.

The fish might be really stressing you out but it really needs to be taken out, put in qt with every other fish you own, whilst the tank is left fallow. If you dont follow this step then I'm afraid you are going to lose the fish or just end up with problem after problem. Sometimes they get over it and seem to build up a slight immunity but everytime you add so ething else you are likely to see at least a small flare up.

Hippos are twitchy. They're also incredibly fast and clumsy. I've had Dory (I have grandkids ) for 4 years. She's beaten herself up more times than I can count and has the scars to prove it. It's not that she doesn't have enough space, she just runs into things at full speed. She still hides a lot and spooks easily, but she's gotten to the point that she'll make kissy face at the glass when I come close. Sometimes. Sometimes she just hides. She still hides from anyone she doesn't know.

As far as the ich goes, she initially would get a few spots from time to time. Especially after a water change. Over time the ich just seemed to quit manifesting. I haven't seen it in probably 3 years and I haven't yet lost a fish to it. I'm not recommending management over eradication, just sharing my experience.

Should I Move My Hippo to the Display?
2