It's been a long time coming, and this summer I was finally done with our old JBJ 28 gallon AIO setup.

One return pump died a few months ago and TBH, I didn't care too much. But the day we were leaving for vacation, and we're doing our last minute checks, I find that the second return pump has died. This particular setup has been going strong for over 4 years with barely any maintenance, so I was sad to see it finally give up the ghost (the setup,BTW was second hand with us and this was it's second incantation).

I have been checking out a lot of options and decided to go with a Waterbox for a few reasons.

1) I've always wanted to see the hype of a starfire glass aquarium;
2) They make everything plug and play;
3) Sump has a built in ATO;
4) (and the reason I went with this one) It looked perfect for our mangroves!

Since photos are worth more than words, here is the current JBJ setup: 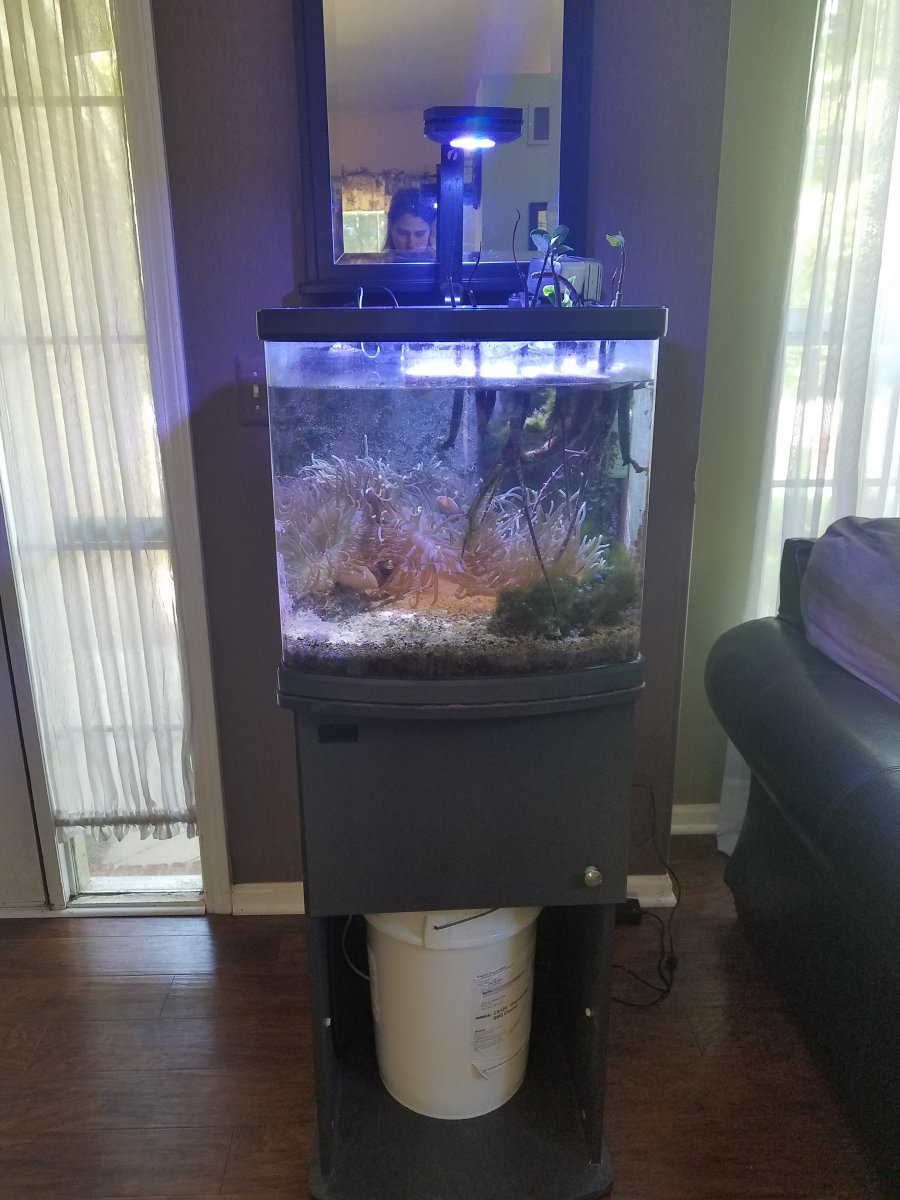 Long tentacle anemones with some of the resident orange skunk clowns: 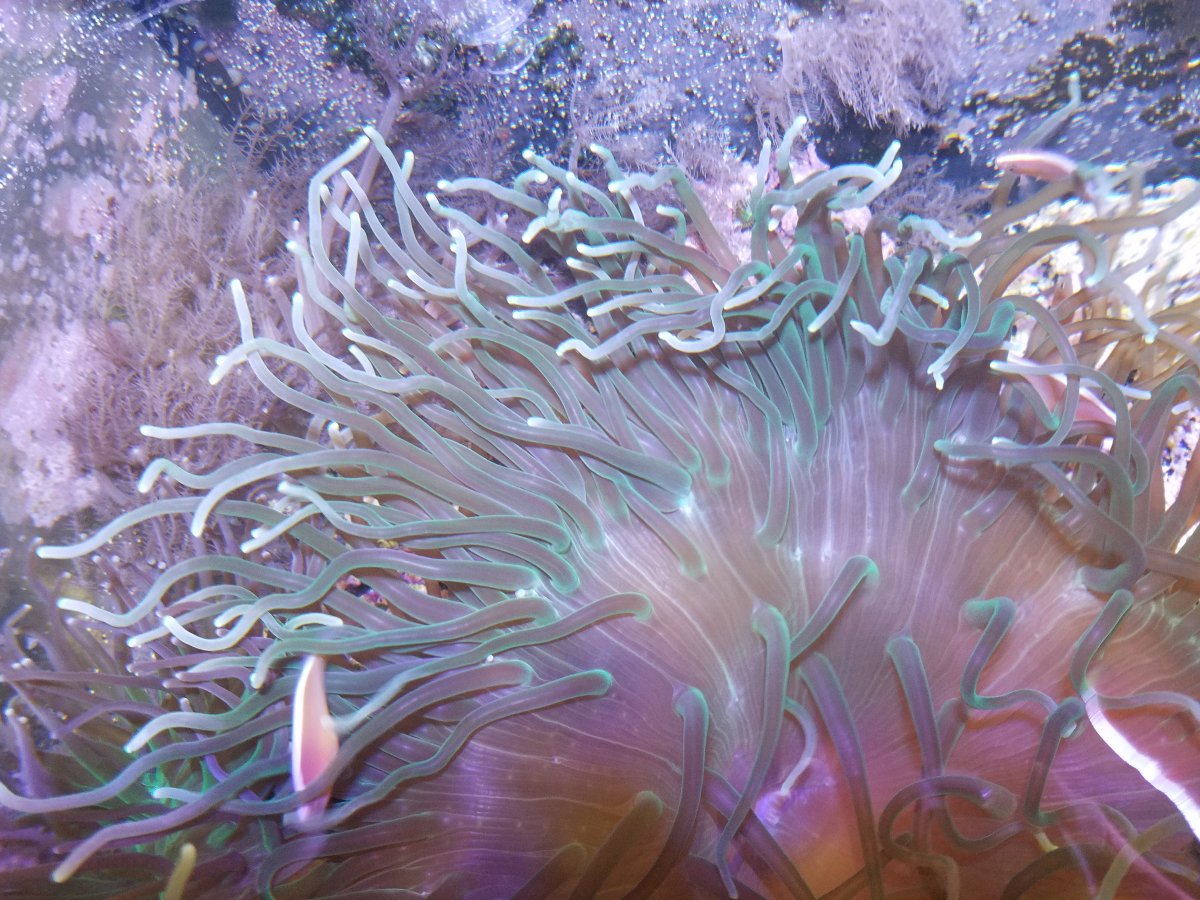 I ordered the tank via LiveAquaria since they were offering a $200 gift certificate with purchase back on Aug 26th. Waterbox sent me DocuSign about a day later (for freight acceptance).

The freight company called me on Aug 30th to setup delivery. I wasn't available to accept until this past Thursday.

The freight guy was awesome and even helped me inspect the tank! Gotta love that!

I proceeded to put the stand together myself that afternoon. We had to stop near the end to go to our sons school open house. I love the height of the stand. I typically like a taller stand for equipment underneath, but in this case with the tank only being 12.4 inches tall, the stand makes up for the lack of aquarium height. 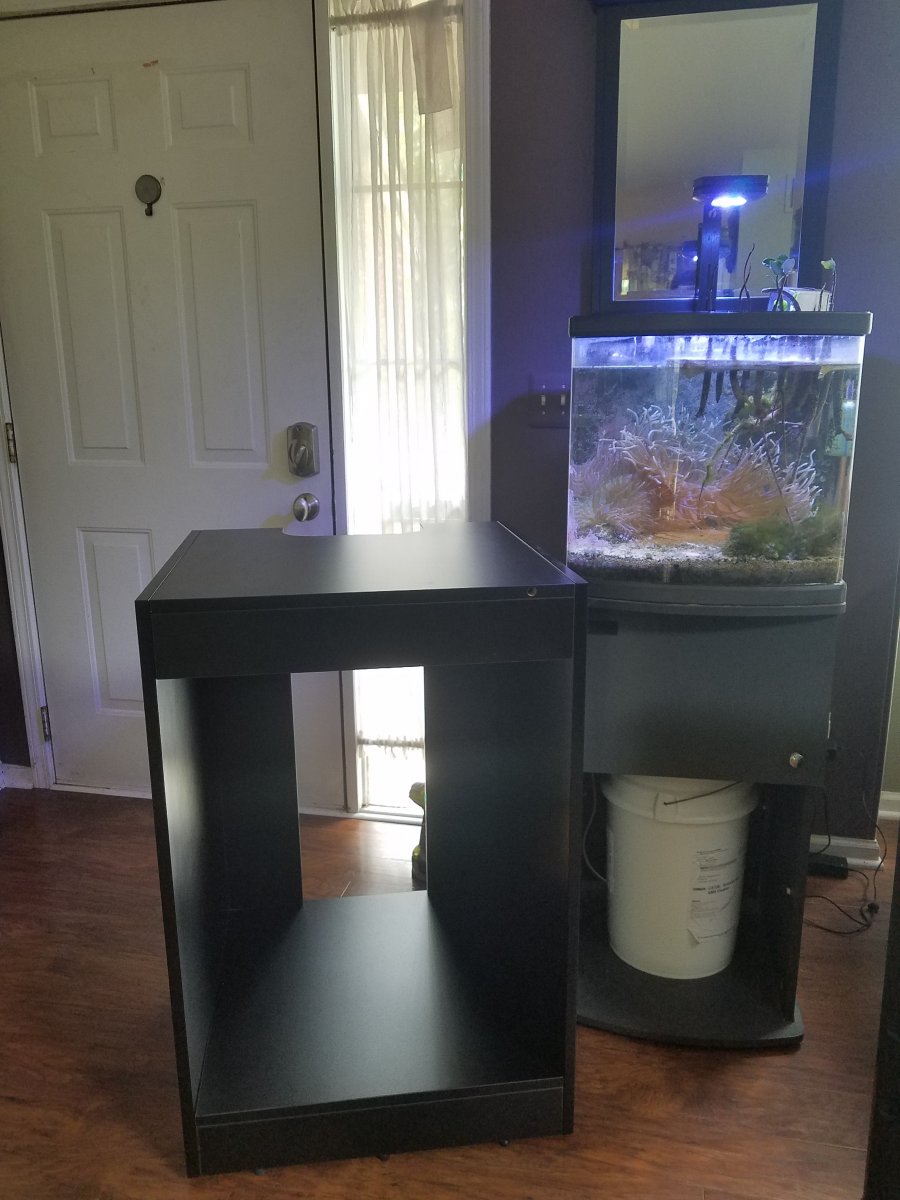 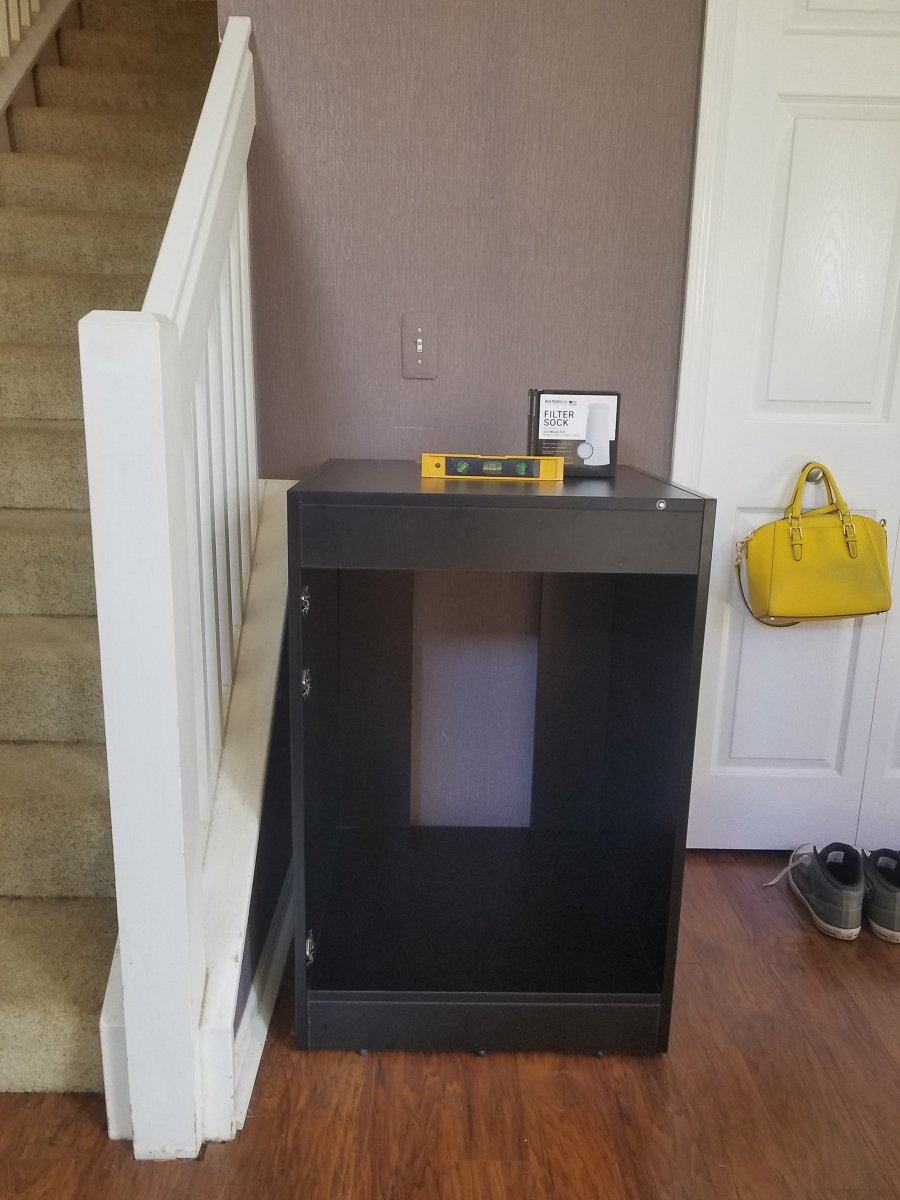 The tank finally got put into place today and got plumbed (so easy!). We're using a Rossmont pump. Never used one of these before. It's very quiet! Rock and sand added as well as the mangroves and finally the tank got wet. Woo hoo! 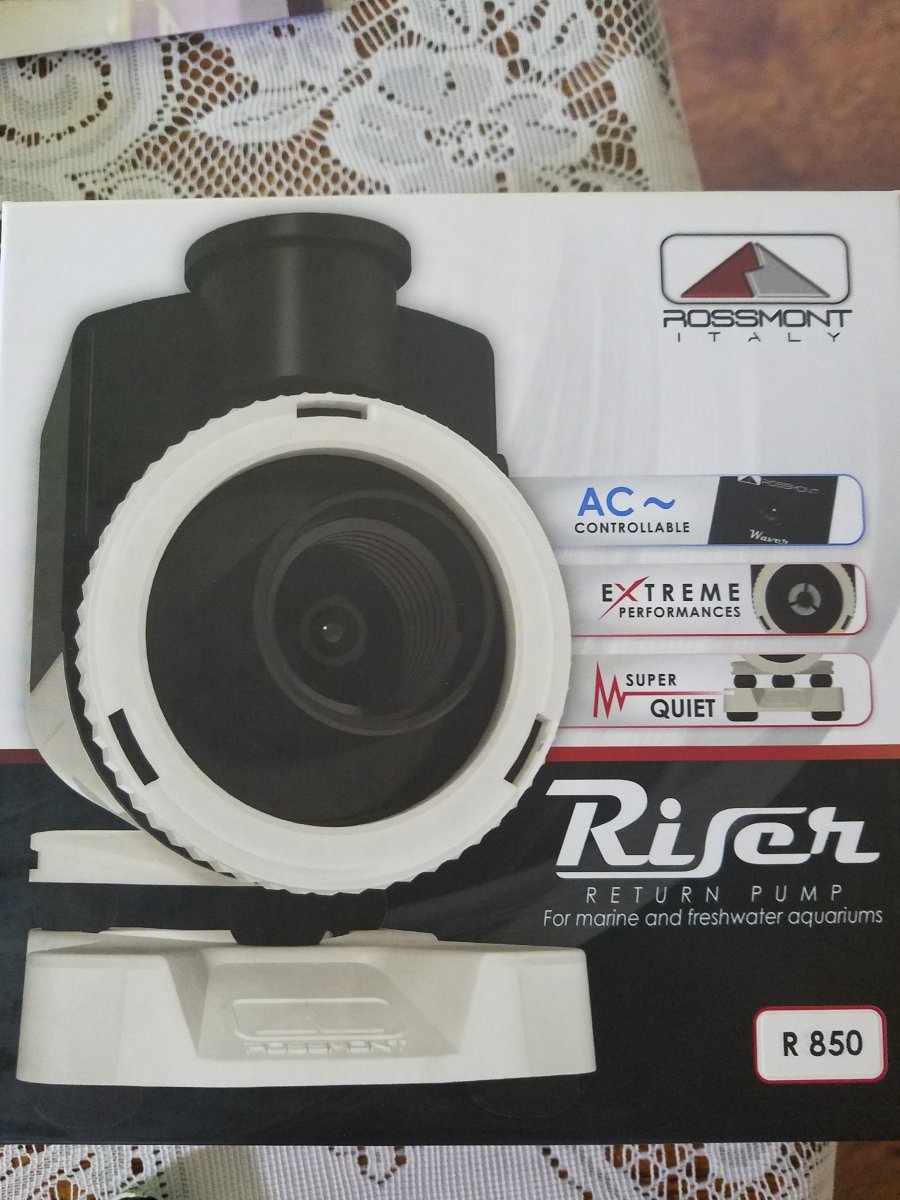 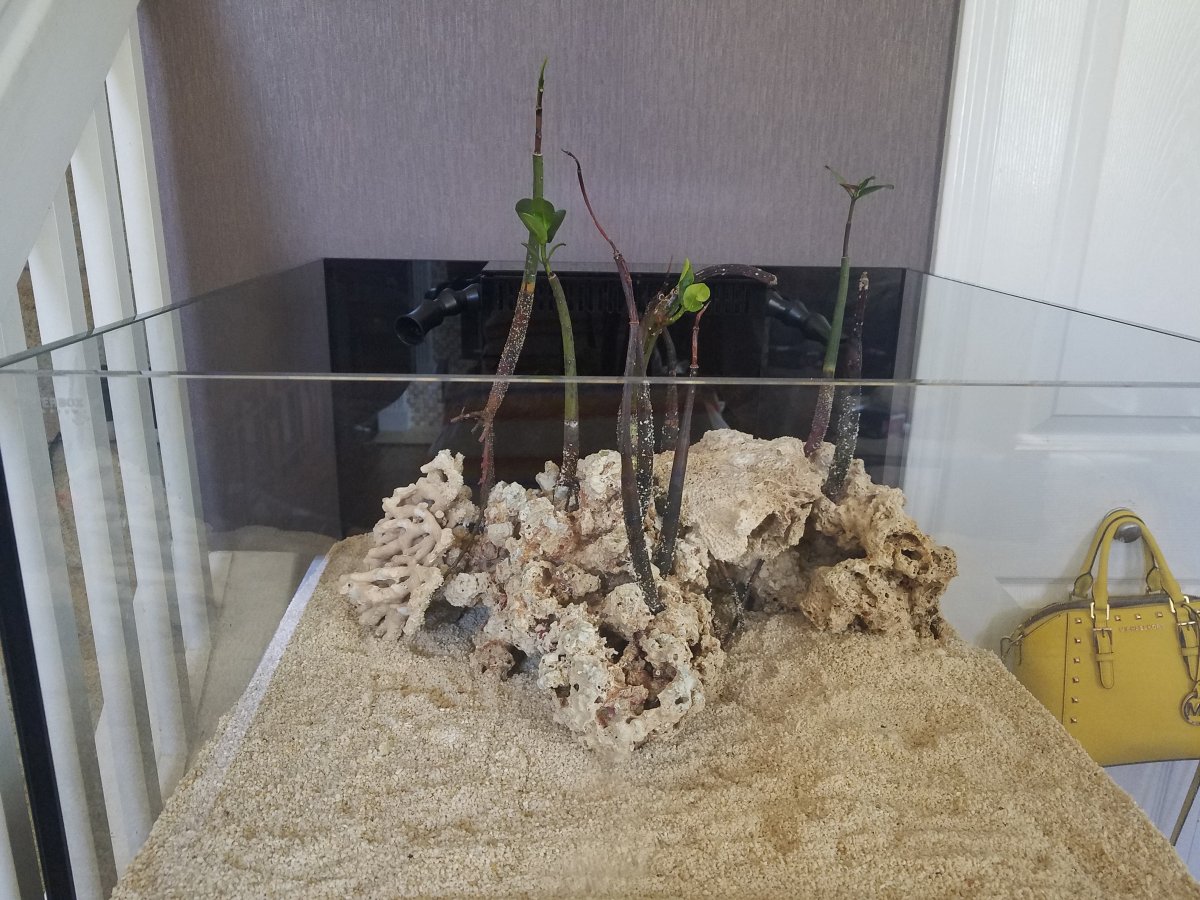 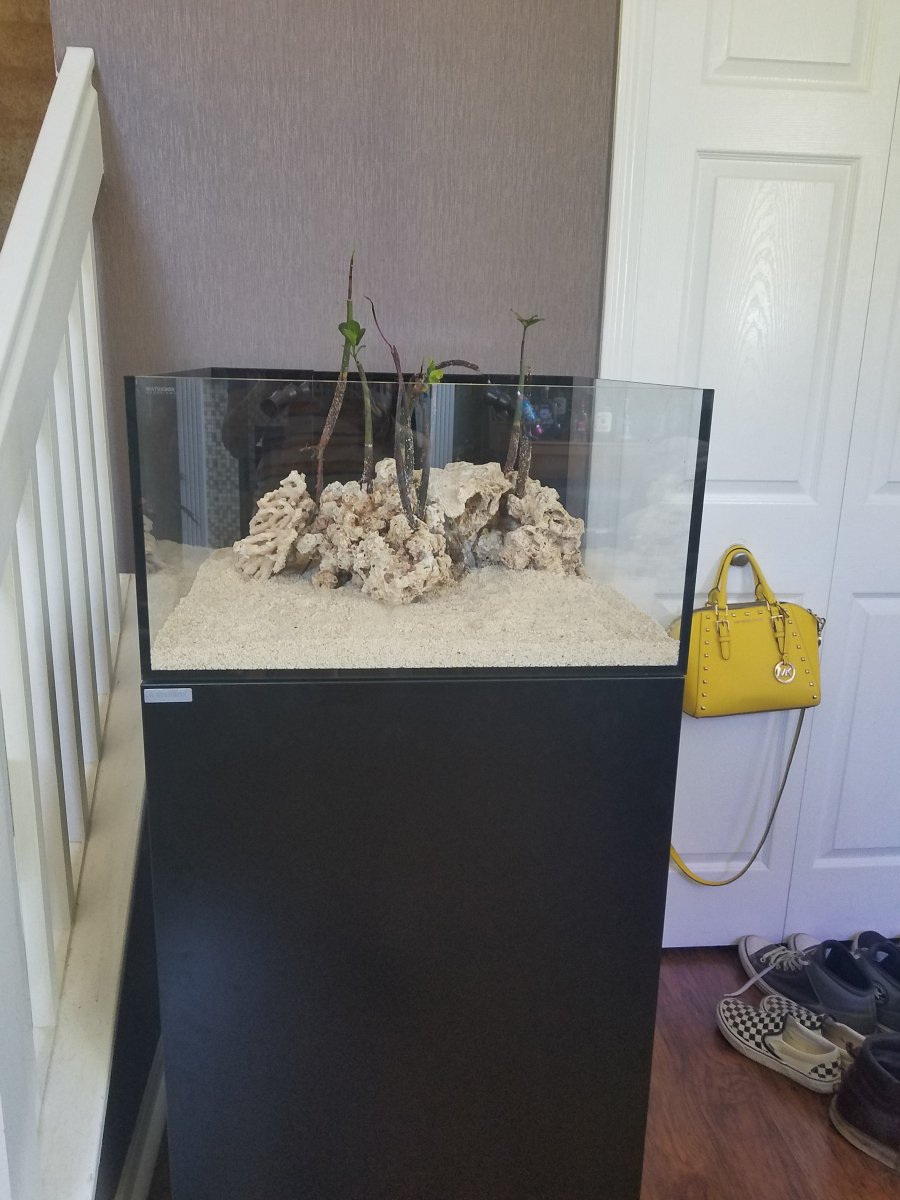 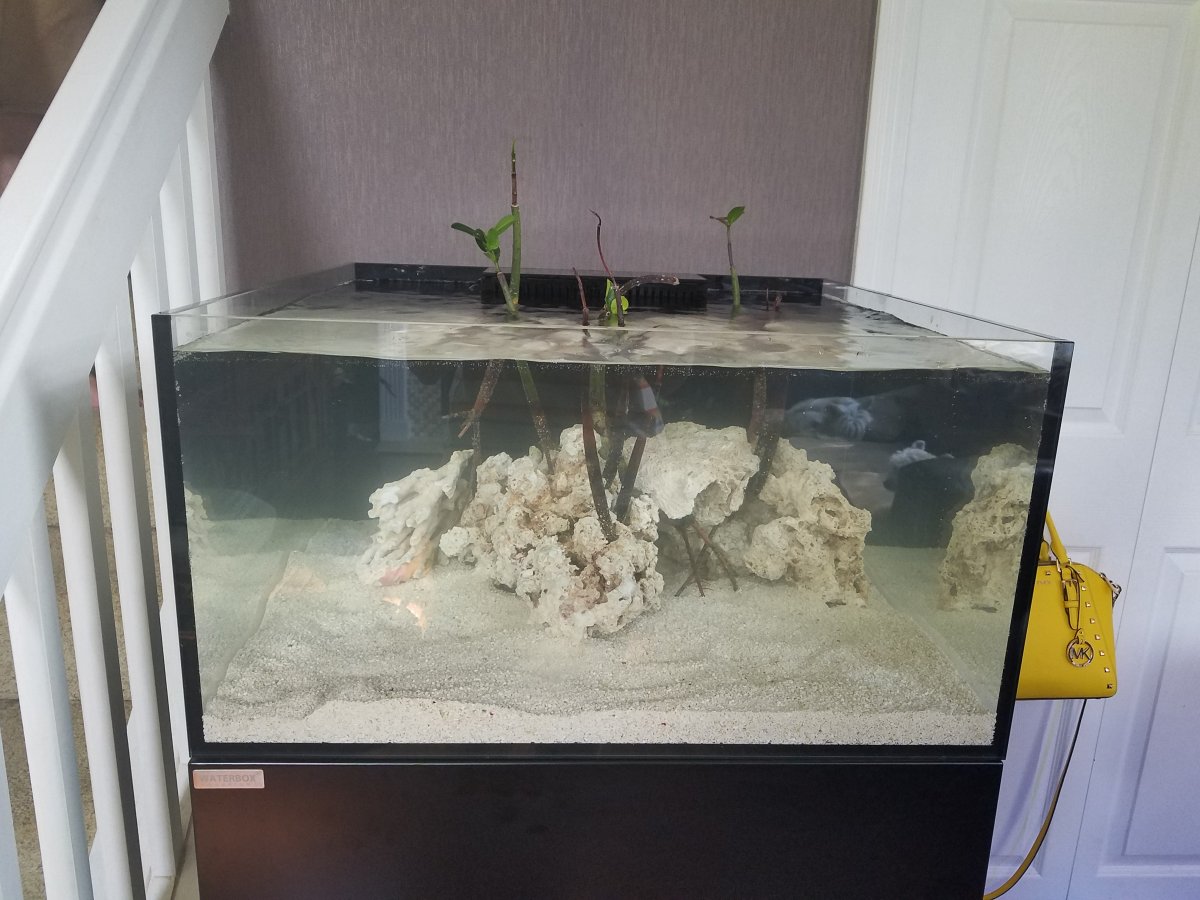 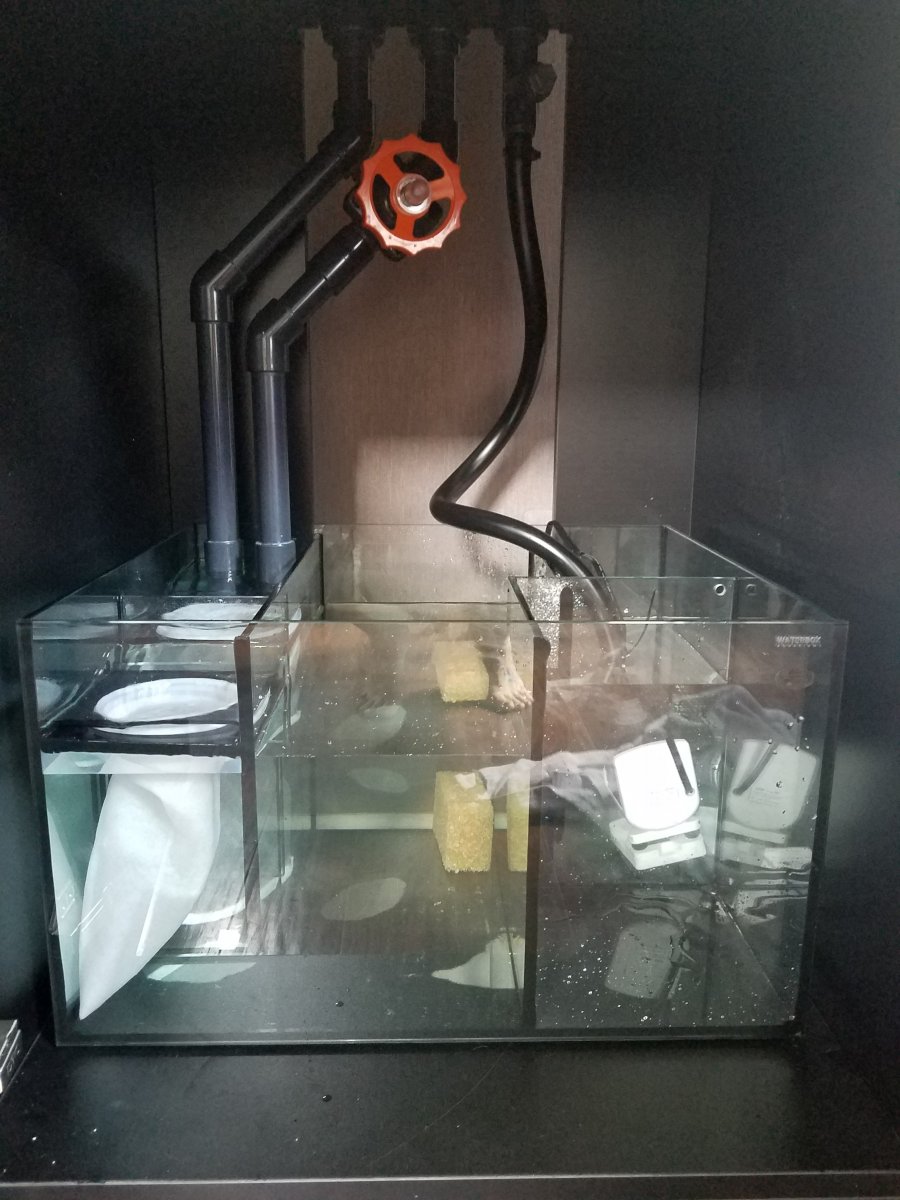 We have a little bit of fine tuning to do before we're done for today.

I also added a sponge from our 300 gallon reef to help seed the tank.

I'll be monitoring the tank until it's ready for the 2 LT anemones and the 6 clowns to go into their new home. I'll probably add clowns slowly to build up the bacteria in the tank.

I'm uncertain if I want to move over the anthelia that is currently in the JBJ. It tends to get out of control and I have thrown out bucket fulls of it over the years.

Further plans (livestock wise) depend on how everyone makes the transition and how new territory is delineated.

I would like to upgrade our 300 gallon setup to the new Apex and move the older version over to the Waterbox.

Not sure if I'll bother with a skimmer since we never ran the JBJ with one. I might cave at some point.

wow!!! That is a beautiful tank!! I didn't know Waterbox made lagoons.
OP

Crossfire said:
wow!!! That is a beautiful tank!! I didn't know Waterbox made lagoons.
Click to expand...

Thank you! It's designed to be a frag tank, but it's perfect for this application!

I've always wanted to try one. I wish I could add everyone into it now!

InkedReefLady said:
I've always wanted to try one. I wish I could add everyone into it now!
Click to expand...

I've only had one shallow build but I really want a 6' shallow tank just dont have the room for it. You will enjoy this tank a lot.
OP

EW_Fish said:
I've only had one shallow build but I really want a 6' shallow tank just dont have the room for it. You will enjoy this tank a lot.
Click to expand...

Over the last week, all the livestock from the JBJ was brought over, with the last of it this morning.

The AI light will be suspended from the ceiling, so the current position is temporary.

Not sure what else will go in here. I was thinking either maxi-mini anemones or possibly some SPS like chalices since our angels eat them in the 300 gallon. 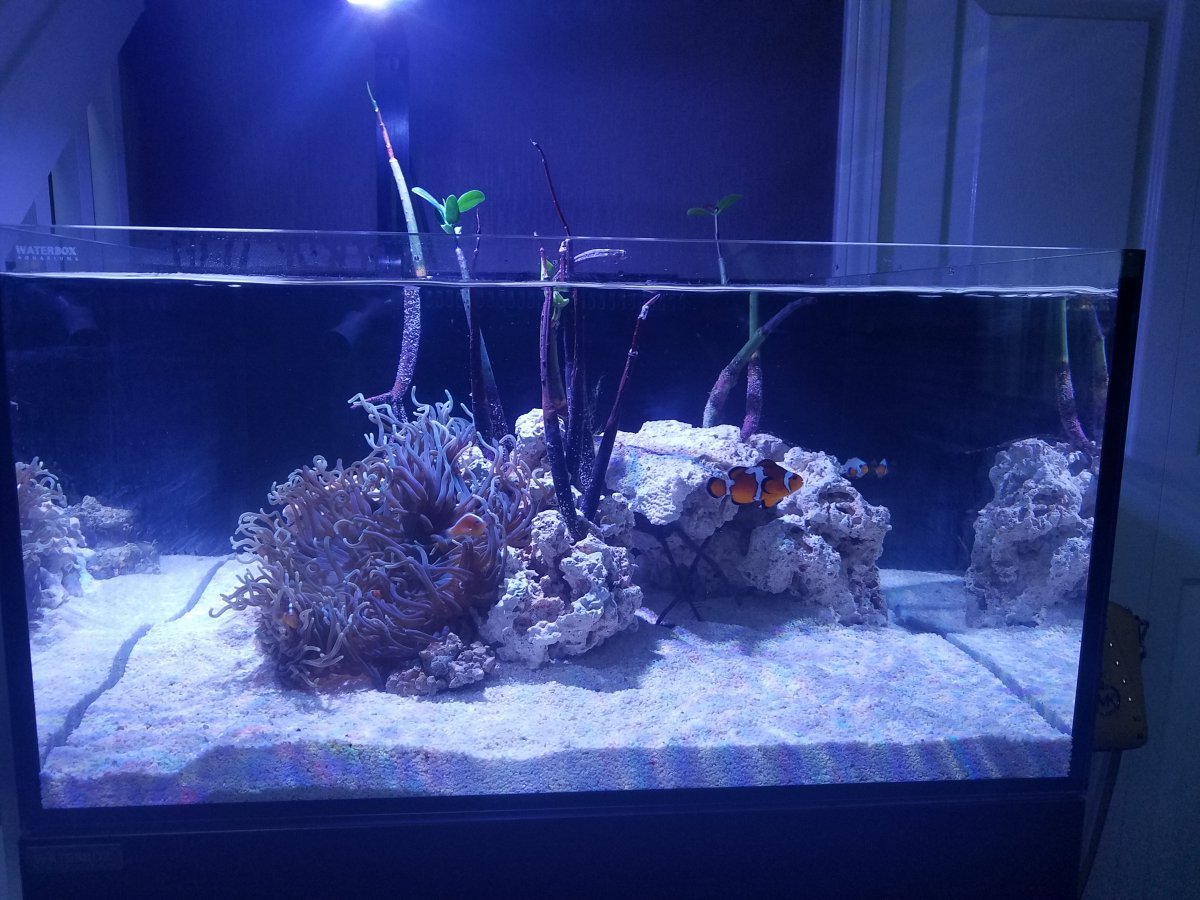 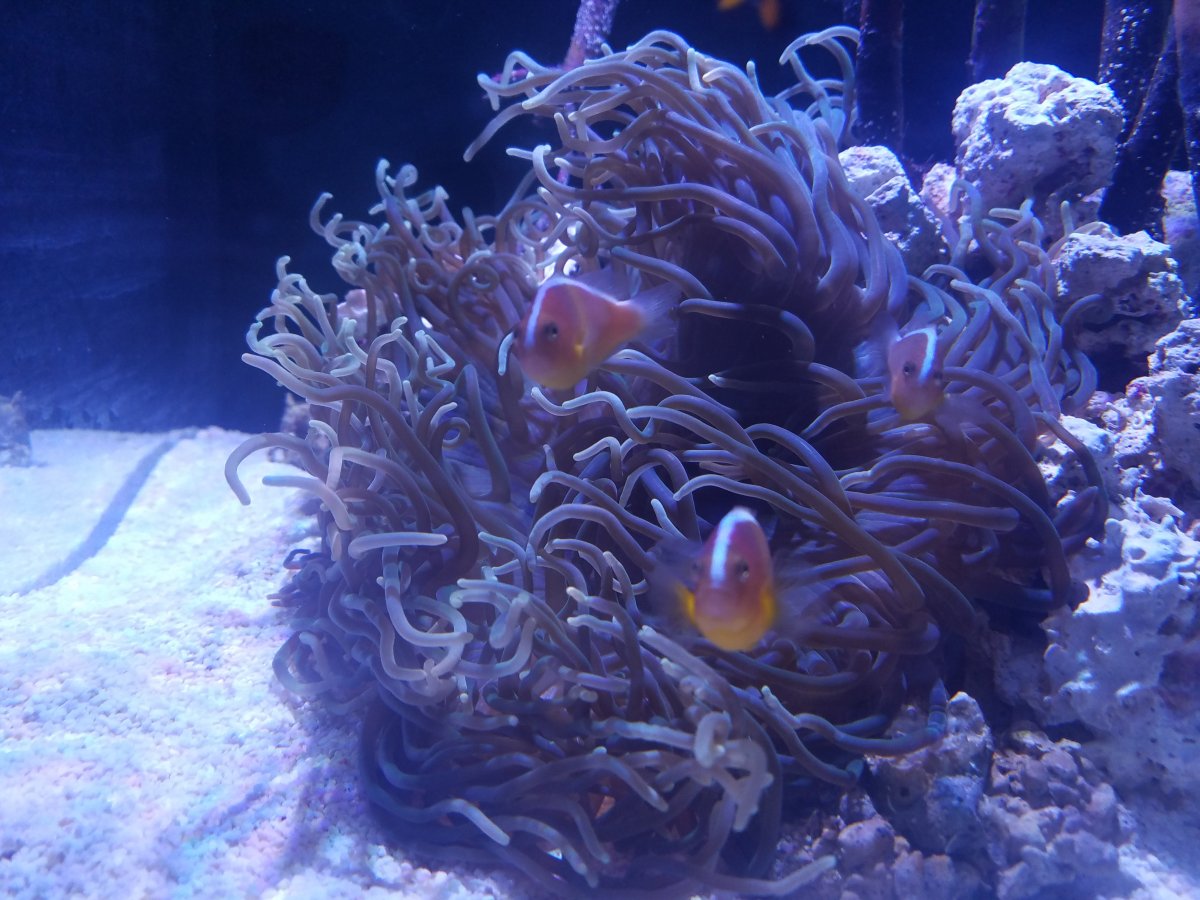 Excellent setup. Thanks for sharing.
R

Awesome; what are the dimensions of the tank?

Awesome! Loving this tank, I have a prototype 50 gallon AIO from Waterbox, congrats on the mangrove reef, following along
OP

ramona said:
Awesome; what are the dimensions of the tank?
Click to expand...

The footprint in person makes it seem bigger than those numbers; at least to me.

Tho she is small, she is mighty!
OP

Perry said:
Awesome! Loving this tank, I have a prototype 50 gallon AIO from Waterbox, congrats on the mangrove reef, following along
Click to expand...

Prototype, eh? Can you share dimensions? Do they have a release date yet? I would totally get another Waterbox!

InkedReefLady said:
Prototype, eh? Can you share dimensions? Do they have a release date yet? I would totally get another Waterbox!
Click to expand...

Lol, 1st AIO brought in 3 years ago, I worked for them as Waterbox was being born. They were going to pitch the tank, as it had old logo, so I took it home and it's been running since. 24x24x21 AIO .5" starphire, but this one jointed with clear silicone. I happen to love this tank design, lol. I no longer work for Deepwater/ Waterbox, but keep a close eye on the company's progression, they seem to be gaining traction in the market. Congrats on the new setup

Nice tank! Love the brs episode in the background of the video