I've had this tank for over 5.5 years and am at the point of doing a warm reboot of it this weekend. That makes no better time I can think of than to start a (re)Build thread!

Here she is with initial setup & rock scape 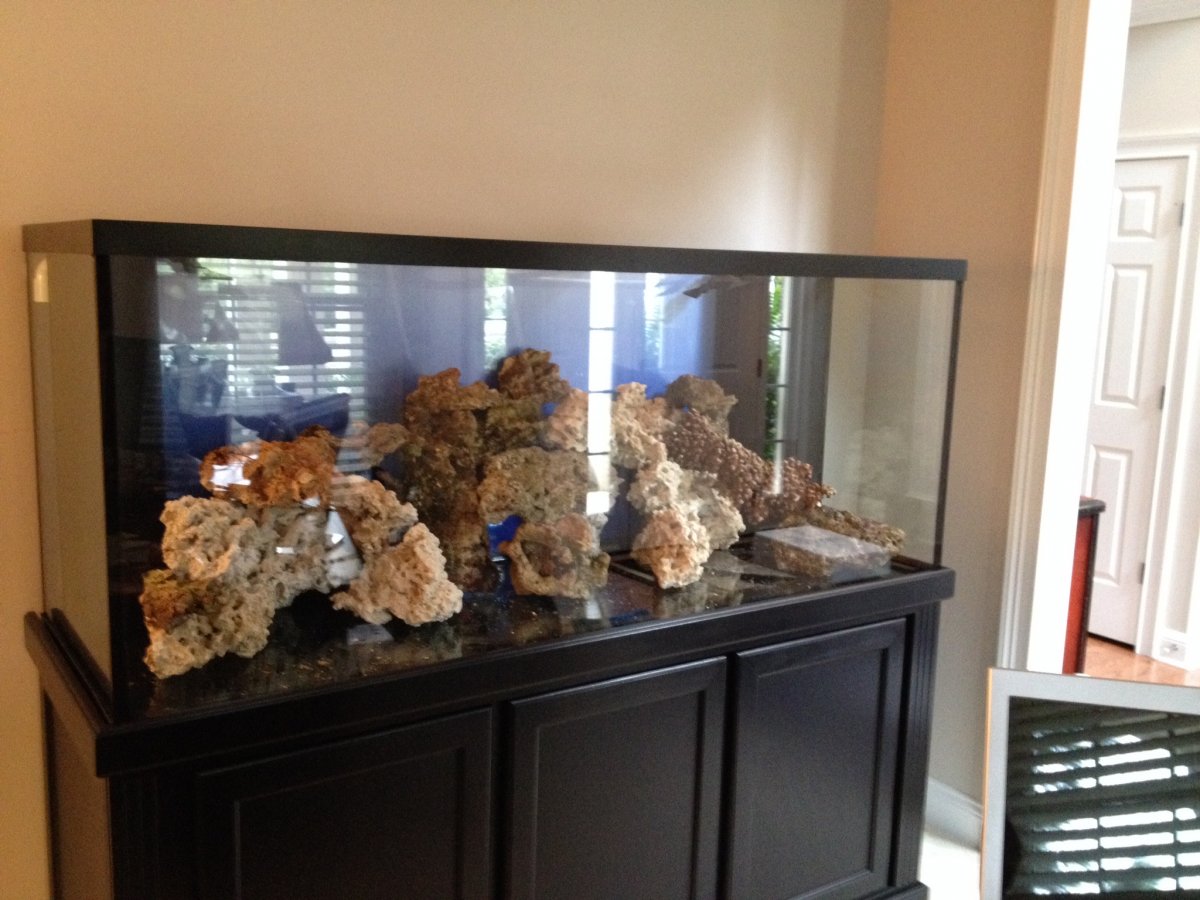 And here's one a few months later after cycling and putting in some zoas and other frags. 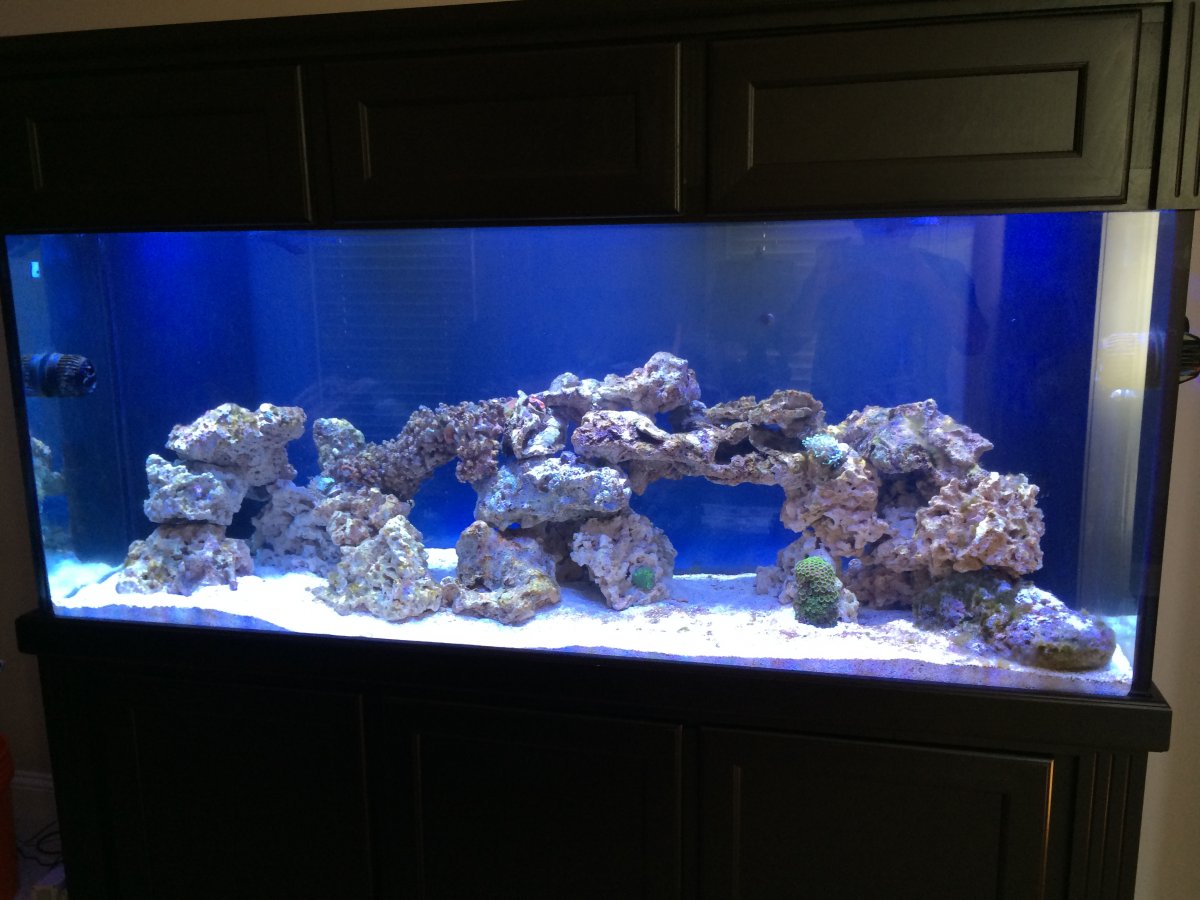 Less than 1 year later, we moved about a mile - so the rock scape evolved, but other than that equipment stayed the same. 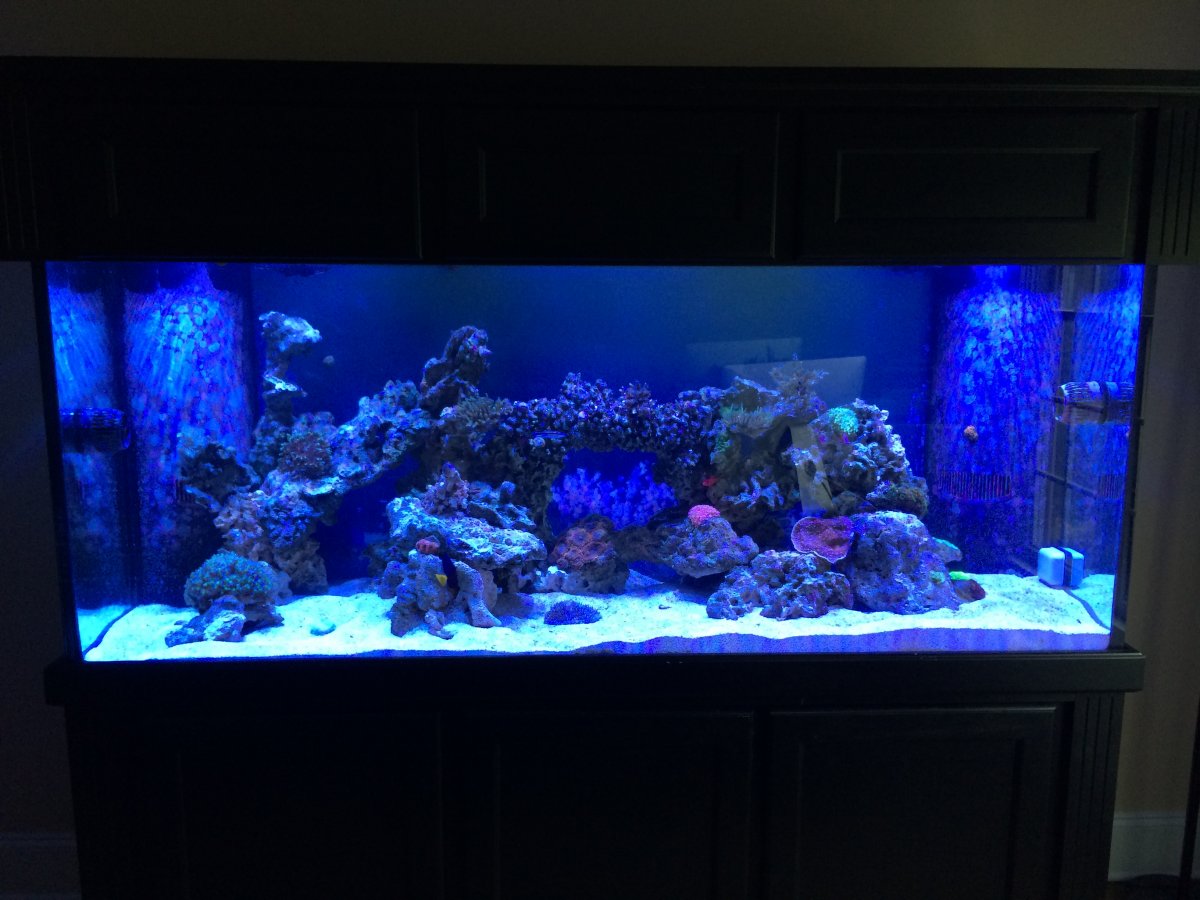 Life changed a bit more taking on a new job that took time away from my tank. Here she is at what I'd consider the peak in October 2016 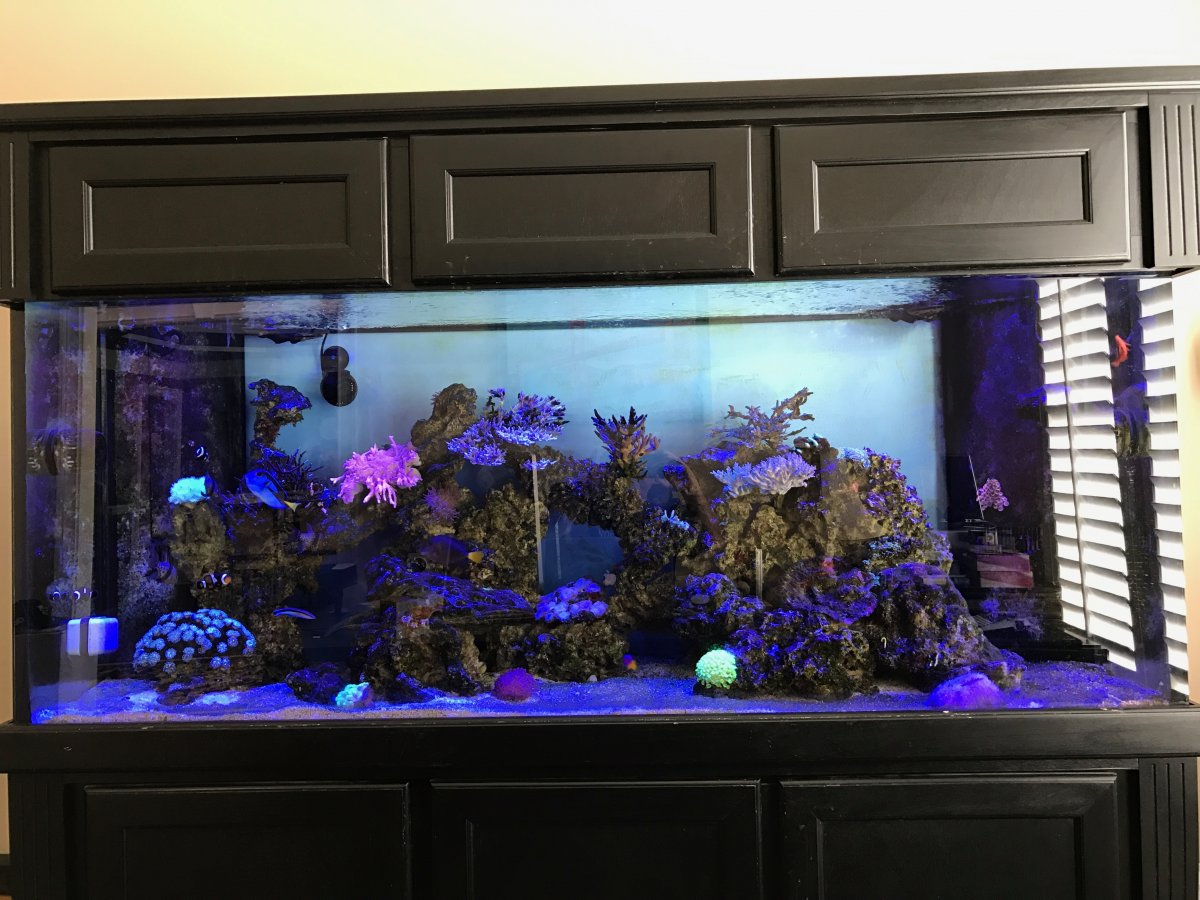 And now to present day. I haven't been consistent in water changes and testing up until a couple of months ago. Testing regularly has been easy since buying Hanna checkers for alk, calcium and ULR phosphate. The water changes have still been challenging, but every couple of weeks I've made them a priority. 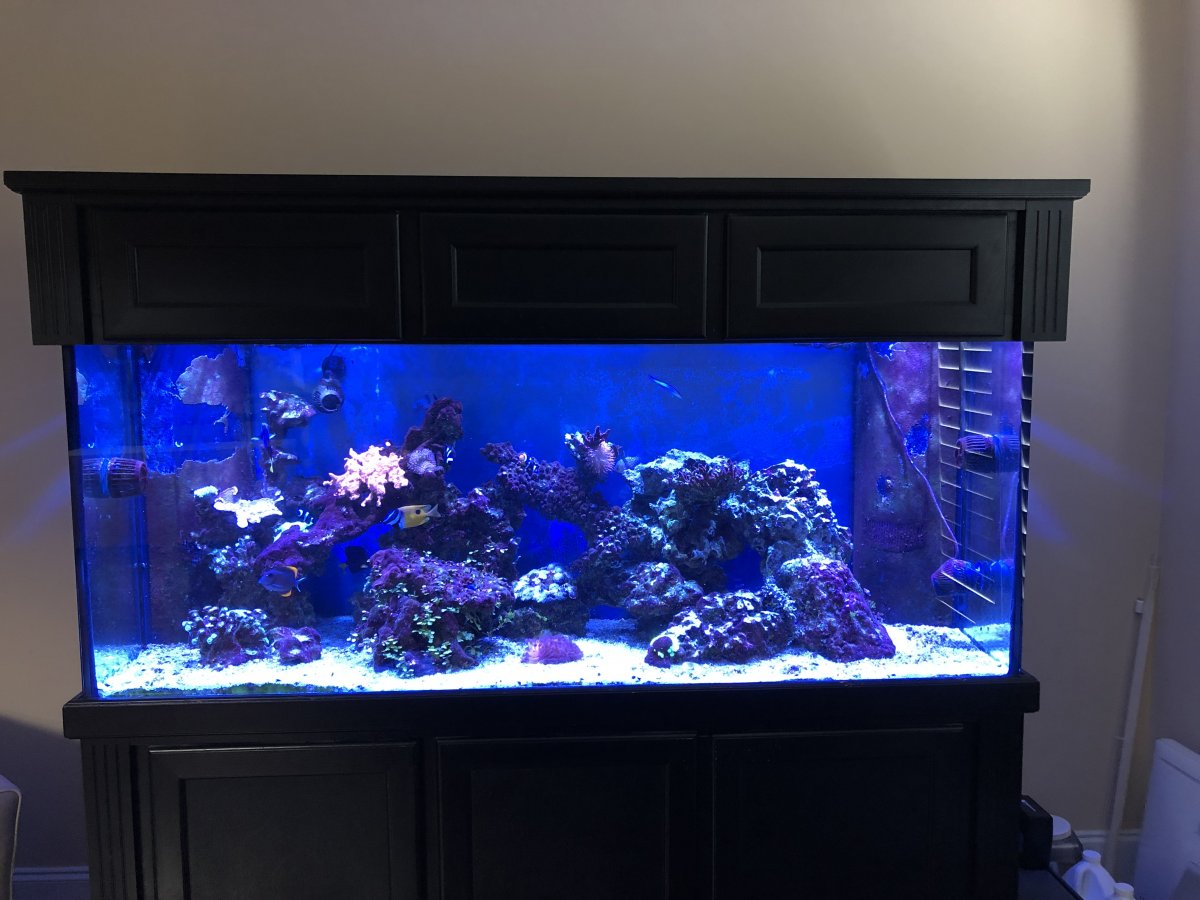 1. Move the tank to the basement. I had it finished and moved my office down there a year ago. That has meant 1 year where I'm not sitting at my desk staring at my tank and picking a small issues as they arise. This move is happening this weekend, 3/23.

2. I can't rely on water changes to replace elements and export nutrients. I know Triton has been a love/hate topic lately, but so long as I can get my hands on their elements (which doesn't seem to be an issue now), I'm going to give it a shot. I've bought a new sump and some other toys over the past year since I knew I'd be moving, and am using this weekend to get things cleaned up and ready for this.

So I've got some new gear here that I've collected over the past year, and I'll post pics as I get them unboxed and as the move goes. I know lots of folks feel post on R2R questions about moves and have a lot of angst about them. I have angst, but much less on the 2nd go around, so I'll document the weekend as best as I can.

New sump going in. I became familiar with Crystal Reef Aquatics when they had a contest going on here 6 months or so ago. I was really impressed with the layout, john guest ports, spacious fuge and skimmer section, and then return pump area big enough to easily accommodate a pair of pumps. So, after comparing with the Trigger Triton 44, I spent the extra dough and am really happy with it (in the box of course).

It shipped safely and was packed well. We’ll see flow through here in about 48 hours! 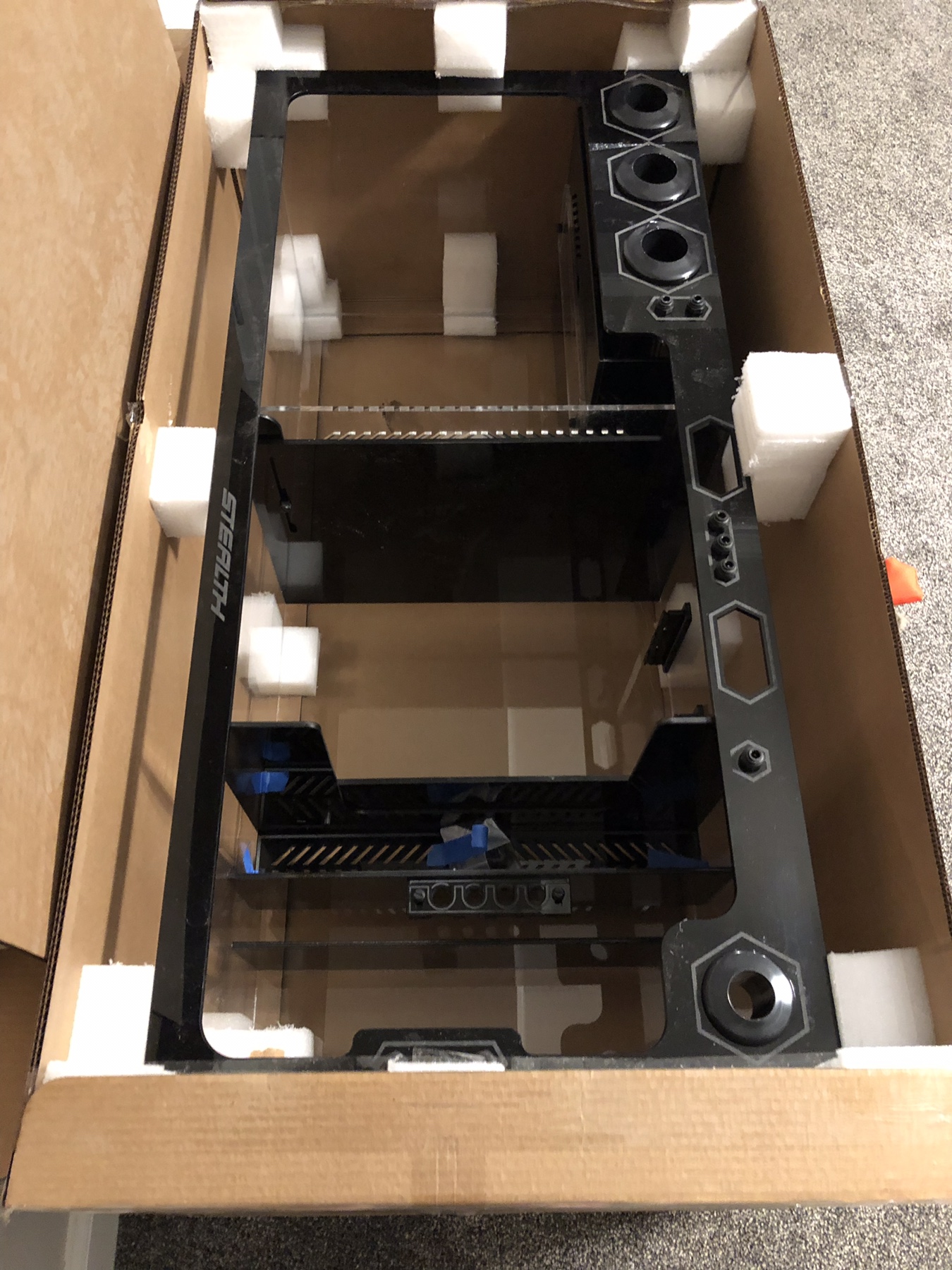 Thanks. It's the Triton TRS 44 from Crystal Reef Aquatics. My original sump was the Trigger Ruby 36. My skimmer was too big to fit inside it, and various other equipment (reactors, dosers, ATO, etc.) led to a good deal of salt creep. I really like this built in tubing on the dosing and ATO connections, as well as the deep runs on the drains. The size and layout should make for a cleaner experience for sure.
OP

On March 23, we moved this beast from this room upstairs 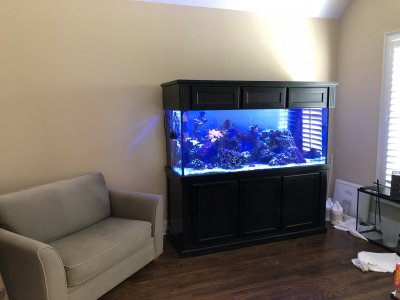 To this space in the man cave. 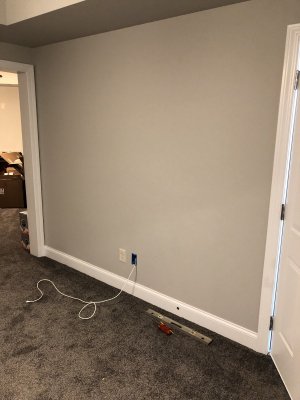 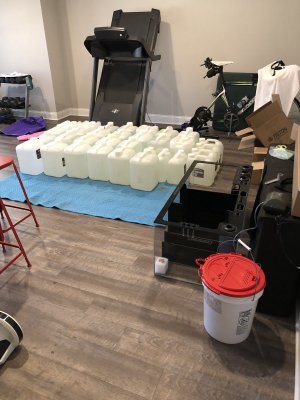 All the rock and coral were either in 55 gallon brute trash cans or some Rubbermaid bins. The fish were in 5 gallon buckets with heater and air stone.

All went well — EXCEPT that both of the cross braces cracked/broke in the process. I’m not real sure why - one theory was that 5+ years of UV hitting it made them brittle. We ordered a new rim, but that was going to take 3-6 weeks, so I bought some 3 foot pipe clamps at Home Depot, and used those to ensure the front & back panes of glass did not bow and crack under the pressure. The picture below shows this setup, along with the red solo cups that were put on the end to try to avert putting eyes out. 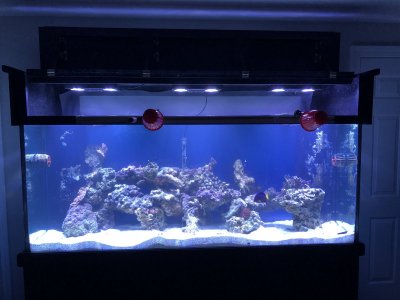 4 or 5 weeks later the new rim came in and it was time to get the tank back in shape. Tito came over 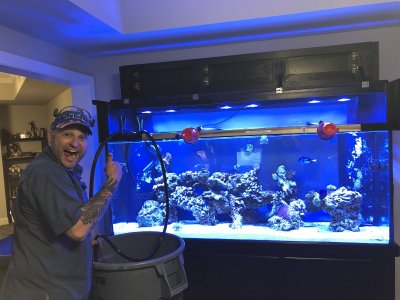 And began to drain down the tank to take pressure off the glass. We pulled the hood off and took the clamps off and he proceeded to cut the plastic all the way around the top of the tank. It smelled awful, produced a bunch of smoke, and the melted plastic splashed on the wall in places (don’t tell the wife - it’s behind the tank) 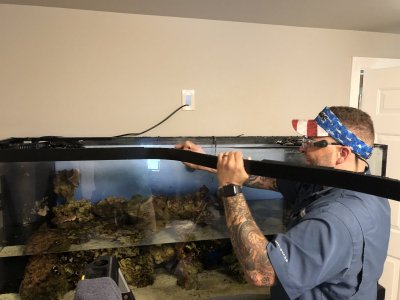 After prying it all off (over 90 minutes worth of work), the glass was cleaned and ready for the rim to be set in place. Here’s the new rim being expoxied up 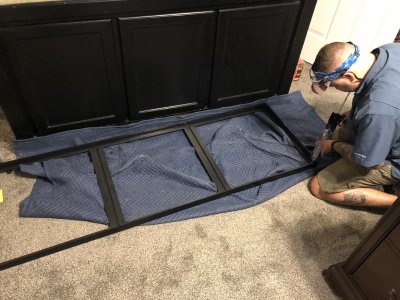 We set it in place, filled the tank back up, and got the hood back on. Just to be safe - we set the pipe clamps back on and left them there for 24 hours to ensure the epoxy set up and the cross braces were ready to take the load. 24 hours later (and really 6 weeks after we started), I can call the move complete. 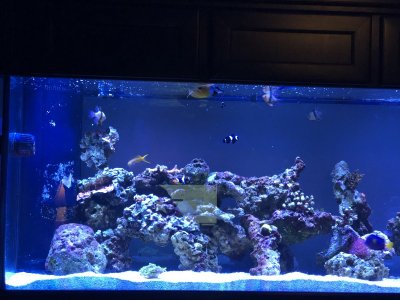 During this time I started the Triton method, which included setting up dosing, my fuge, and flow through the new sump. I also took advantage of the wall the tank is now on to move my UV, reactors, dosing setup, and ATO into a “fish room”, which is also the tool room. Not 100% ideal - but much roomier and cleaner of a setup than cramming it all under the tank. I’ll post more on this with pictures. 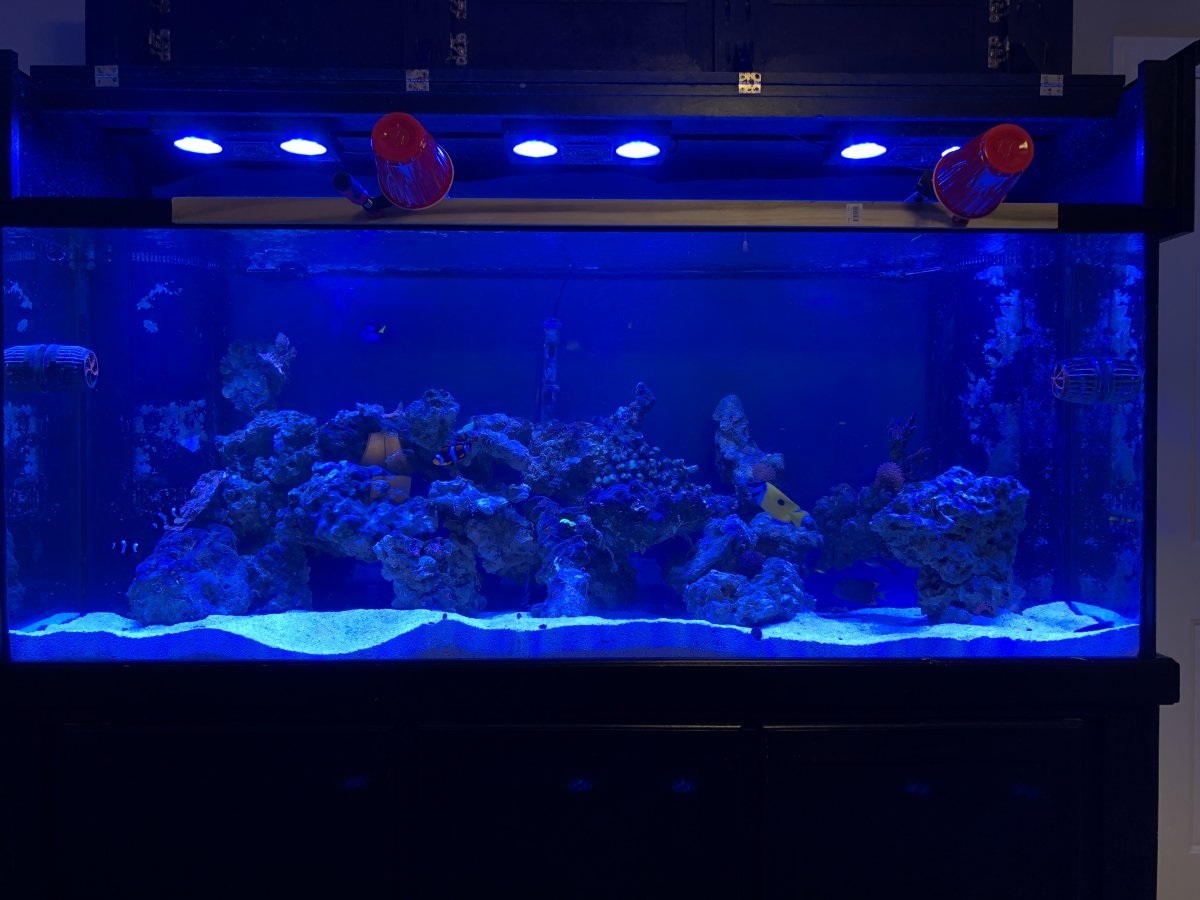 Looks great, especially the sump, I am sure you will be glad to get rid of the salt creep.

What a process! Thank you for sharing.

Such a sweet tank...love those dimensions.
E

Looks amazing! Love the 'scape... and seems like it has also been quite the journey... Although I am settled in for a minimum of a few years, I am not looking forward to eventually moving house...
OP

Over the past few months my corals haven't looked as great and I've battled dinos. Lo and behold I think this boils down to nutrient imbalance. I've registered 0 nitrates across API and Salifert test kits, and .13ppm phosphates. Instead of dosing, I decided to up my bioload by adding fish. What better day than black friday?

With 55 gallons of made up water sitting at 77 degrees and 1.025 salinity, I ventured off to a black Friday sale and picked up some sweet fish

It would be at least another hour round trip to get out and back to Petco or Petsmart to get a replacement and I don't have a spare laying around. So, I'm rolling the dice further and we're going straight in the display. Fingers crossed. My LFS is great and the fish looked good, but I hate rolling the dice this way.


TL;DR - TIL to always check your equipment before bringing home fish. I'm now adding straight to my display tank from a very reputable LFS because my HOB filter died.
Last edited: Nov 29, 2019