Rating - 0%
0   0   0
Launching a belated build thread as I jumped to stage 2 of my previous "Jonathan's Bobbit Recovery" build thread's 3-tank build plan and never started a new build thread. ;Nailbiting It's going to be a while before I jump to the last stage of my build plan as this current tank needs to be completely grown out with coral before I go to the forever tank. And...there have been mishaps. Several. So it's going to take a minute.

Before I get into the backstory to bring you all up to date to where I am now (I’ve had this going for a year and a half—that’s how behind I am in updating R2R), I'll show you some tank pics and a list of the equipment, parameters, and livestock.

Aaaaaaaand some photos (the Madman purple acro at the top has doubled in size and purpled up, with neon greens in the middle. The banana hammock anacro on the left has tripled, but has lost some color. Hopefully the nitrate dosing I'm doing will fix that in short order. I'll post updated photos on coming days--I have a LOT more to show you!), so stay tuned for that. 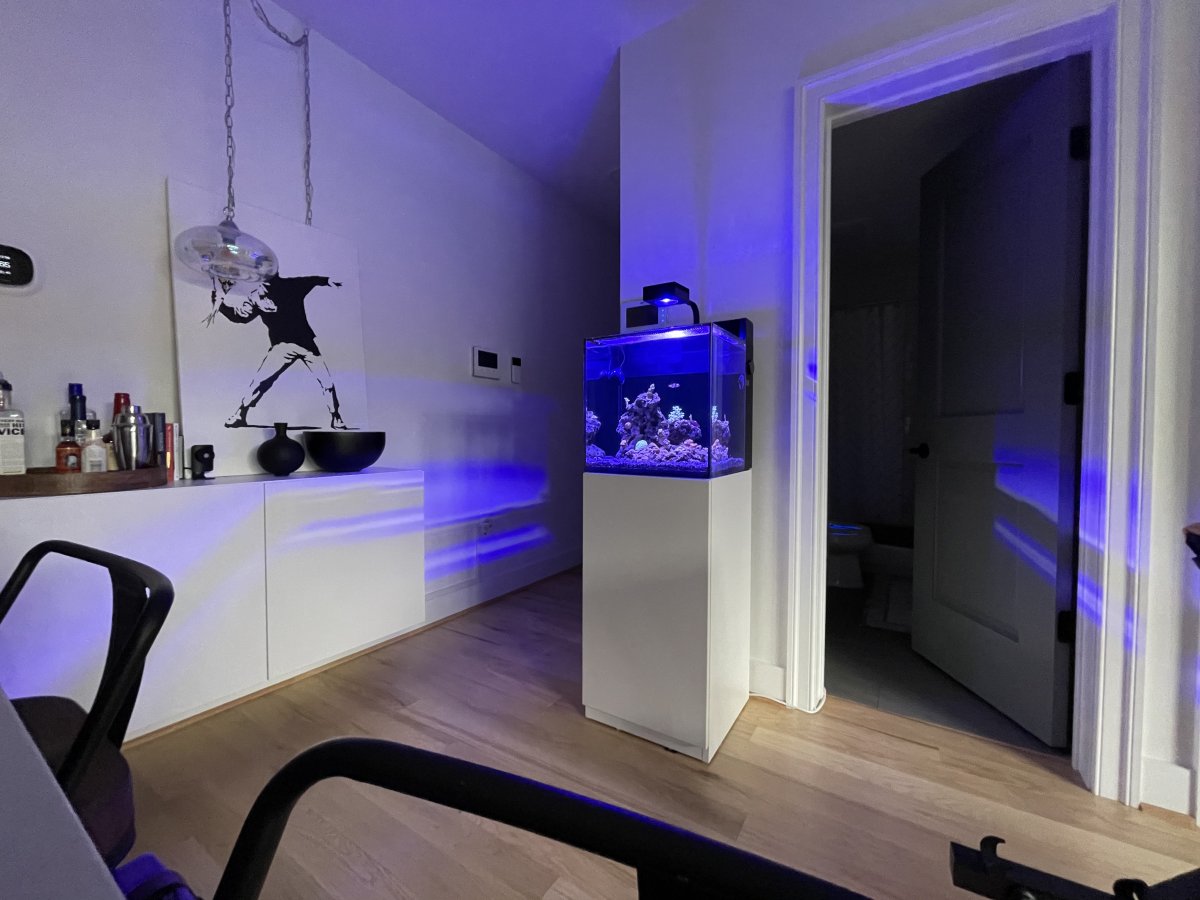 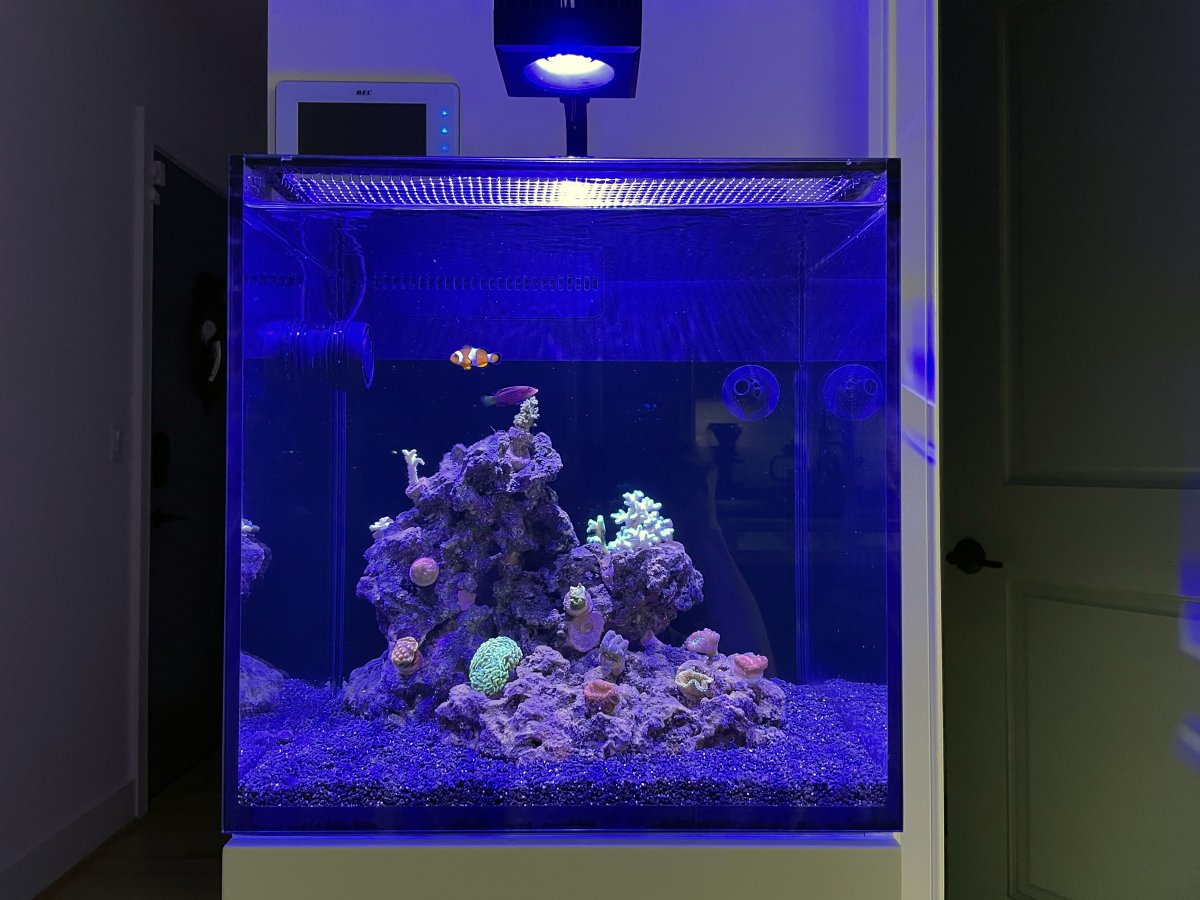 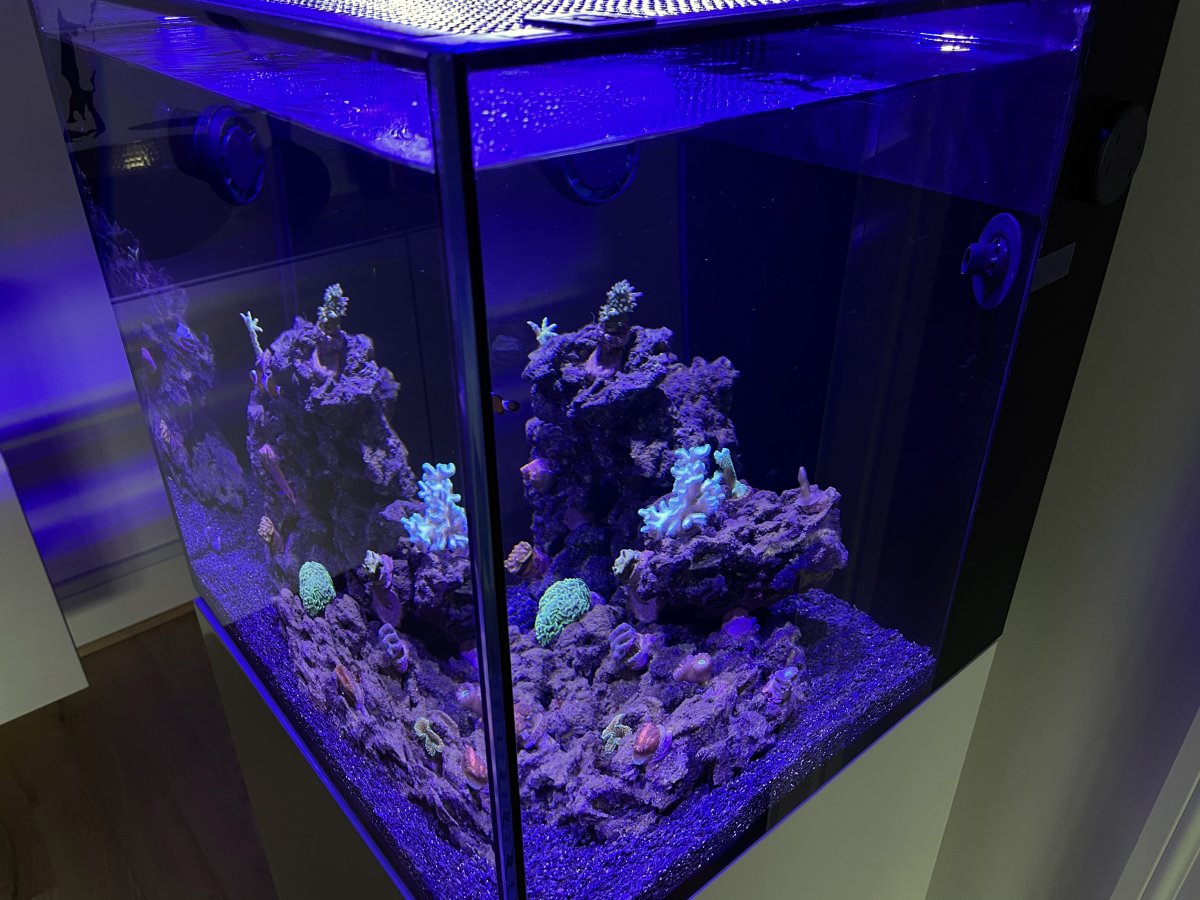 Rating - 0%
0   0   0
SO. I've had the Red Sea Max Nano 20G for about 1.5 years now. Was stocking it with beautiful pieces from WWC originally, and then had a kalk mishap, where my ATO failed and dumped in too much kalk; woke up to about 9-9.5 pH, calcium and alkalinity off the charts. Most of my coral bleached a few days after, but after a month, the color started to come back--lost zero coral but stopped kalk as I don't want to deal with that again. I started using All for Reef exclusively to manage all foundation elements and trace, dosing every 4 hours, instead.

That kalk mishap kicked off new algae growth, so I dosed Vibrant which helped for a few weeks, but then I started growing cyano and a nasty brown algae-looking films everywhere (when it grew longer, it would wave in the current--very fine whipsy threads across the whole mat--no bubbles). I checked my nutrients and realized they were at absolute zero with low-range test kits, so I thought "oh, I have dinos!" I fought these for almost six months, with UV sterilizer, feeding heavily, dosing Microbacter7, not doing water changes, not cleaning glass, etc. Things looked pretty awful.

The "dinos" never went away, so I just went back to cleaning my tank as normal, thinking I'd rather see a clean tank and have to do frequent scrubbing and glass cleaning and gravel vacuuming than have a dirty tank. I figured it would take care of itself anyways after a certain period. Well it didn't. So then I bought a microscope to determine the kind of dinos I had. Under the scope, I saw no dinos, just algae cells. It didn't click then ... I thought that maybe I just didn't have the right resolution/magnification on the scope and gave up trying to identify the type. I kept on as normal. Normal bi-weekly maintenance. Nutrients stayed undetectable even with extra feeding. Brown film would return a few days after cleaning. It started receding on rocks, but would absolutely cover the sandbed and glass. Along the way, I lost both birdsnest—which were the largest coral I had, so now there is a pretty big gap in the display. All my other acros are alive and well.

More recently, I decided to start dosing NeoNitro on an automatic doser to get my nutrients up. I'm not dosing much right now, but it has raised my nitrates from undetectable to about .25. Phosphates are at .01. I will wait a few weeks to up the dose slowly, until I get to about 5ppm.

About a week ago, I was doing some reading and came across "gold algae" and the photos look exactly like what I have. I also learned that Dino-X can be helpful in combatting this kind of algae, so I bought some and IT ARRIVED YESTERDAY. Once the lights go out tonight, I'm planning to do my first dose on the tank. Will remove the activated carbon and then dose every other day until (IF) the algae goes away. Will keep a close eye on nutrients as well.
OP

Rating - 0%
0   0   0
Also, yesterday I purchase a blue stylo to sit where the birdsnests used to sit, and WWC asked me "you have some coral club pieces that haven't shipped yet, do you want us to send them, too?" I said sure, and then went and looked at how many pieces would be coming. It's three month's worth. THREE MONTH'S WORTH. That's like 15 pieces. I do not have room for this! So exciting, but eek. They arrive tomorrow. I suppose they will sit on frag racks until I can decide which ones I want to keep and which ones will go to my lucky local WAMAS club members. And also this means I'm going to have to keep a REAL close eye on my dosing for the first couple of weeks.

Rating - 0%
0   0   0
The Dino-X worked. I only did two doses, 2 days apart, and then put activated carbon back in to get the algaecide out and dosed LRE a day after last dose of Dino-X. Tank is free of the brown stuff and rock and sand look good. Tank glass has also remained clear. No SPS/LPS coral losses yet. We'll see how long this lasts. I probably wouldn't use Dino-X again--because it was TOO effective. That's kind of scary. Only reason I used it was because nothing else had worked when I had attempted several months ago, and I was tired of doing nothing after just letting it bake for the last few months.
OP

Rating - 0%
0   0   0
Just a quick update to close this out -- the dinos didn't come back. I sold my house in April, and the tank went with it. The frags from WWC all made it and were encrusting well, and the new owner inherited a very clean tank, albeit with lots of vermatids. I wonder what those frags would look like now if I had kept the tank ... I'll be back with a new tank build as soon as I figure out where I've settled. In an apartment now, but potentially buying a new house in Baltimore. If I stay here, it will be another nano. If I buy a house, it will be a Reefer 250 G2 or larger.

Saturday at 4:58 PM
Buckster
B