Legendary Corals said:
Some of the clove polyp varieties growing out here in the farm! They're a bit jumbled up since I'm behind on fragging, but it is really cool to see them mixed in together swaying in the currents. 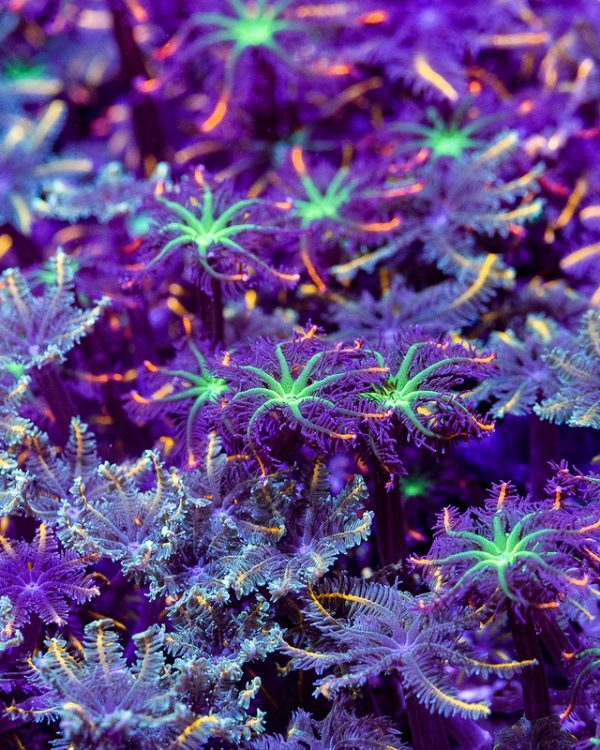 Wow!!! What are the blue and yellow ones?!
OP

footgal said:
Wow!!! What are the blue and yellow ones?!
Click to expand...

One of the clove polyp varieties I'm growing in the farm! The polyps get really big and they're pastel like in coloration. Under blues the tips look almost teal. 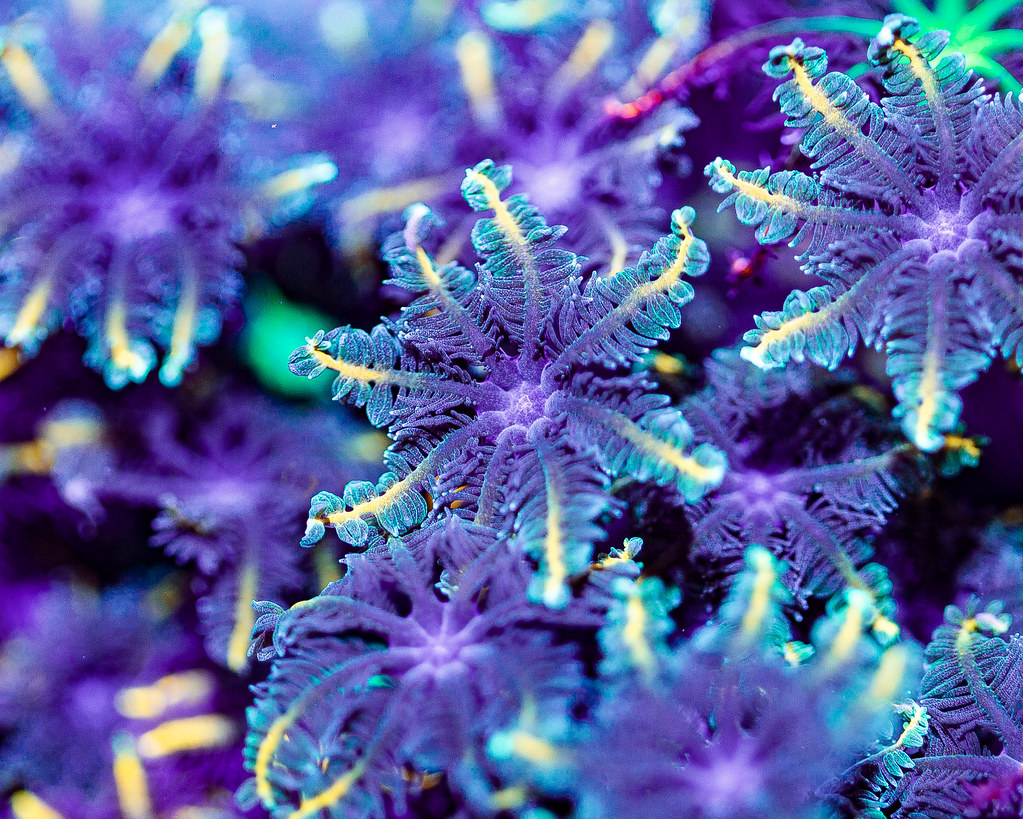 Legendary Corals said:
One of the clove polyp varieties I'm growing in the farm! The polyps get really big and they're pastel like in coloration. Under blues the tips look almost teal.

Oh. My. Gosh. I love them!! I’m kind of a clove enthusiast and those are just stunning! Are they on y’all’s website??

footgal said:
Oh. My. Gosh. I love them!! I’m kind of a clove enthusiast and those are just stunning! Are they on y’all’s website??
Click to expand...

Yes, I do have a stock item of them on the site! Just a heads up, they're mostly teal due to the blue lighting that they're under. Here's some frags under more blended spectrums that's a bit more accurate to their look: 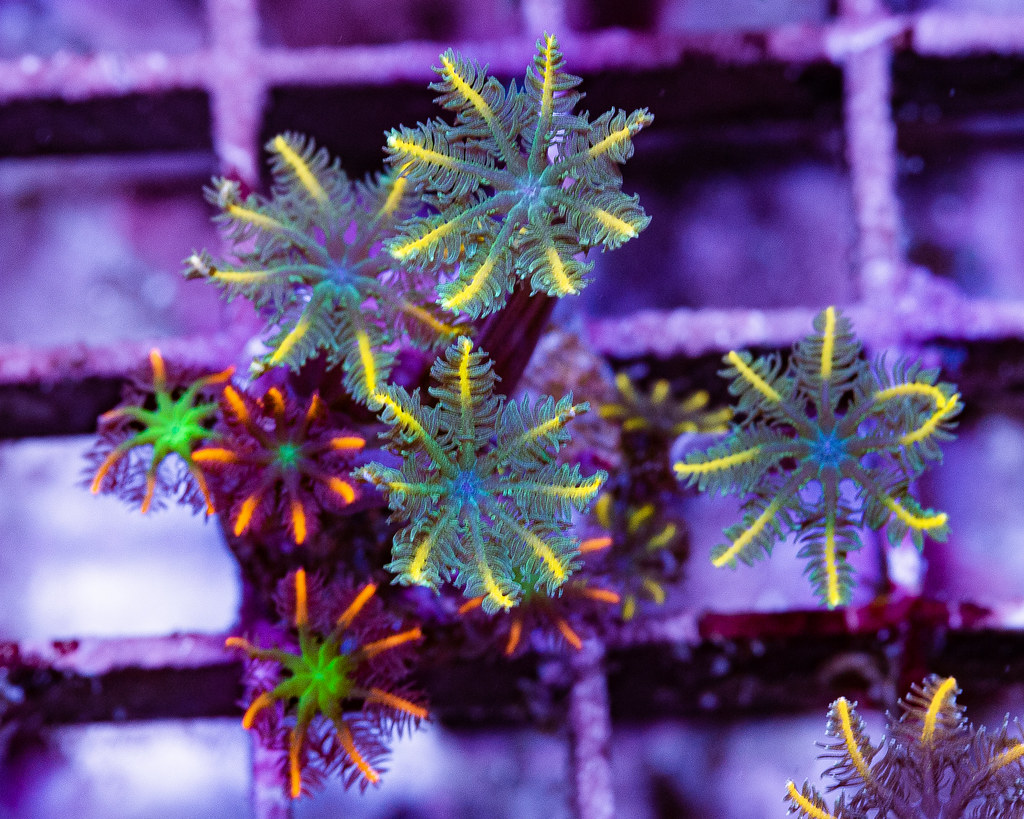 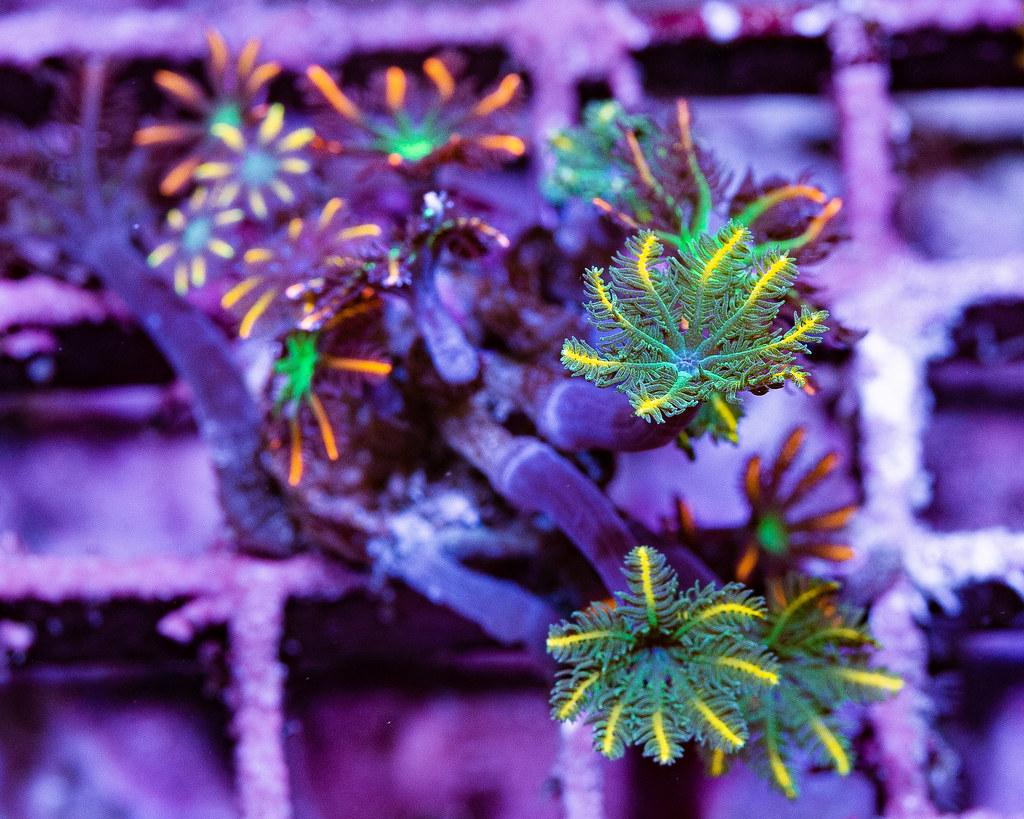 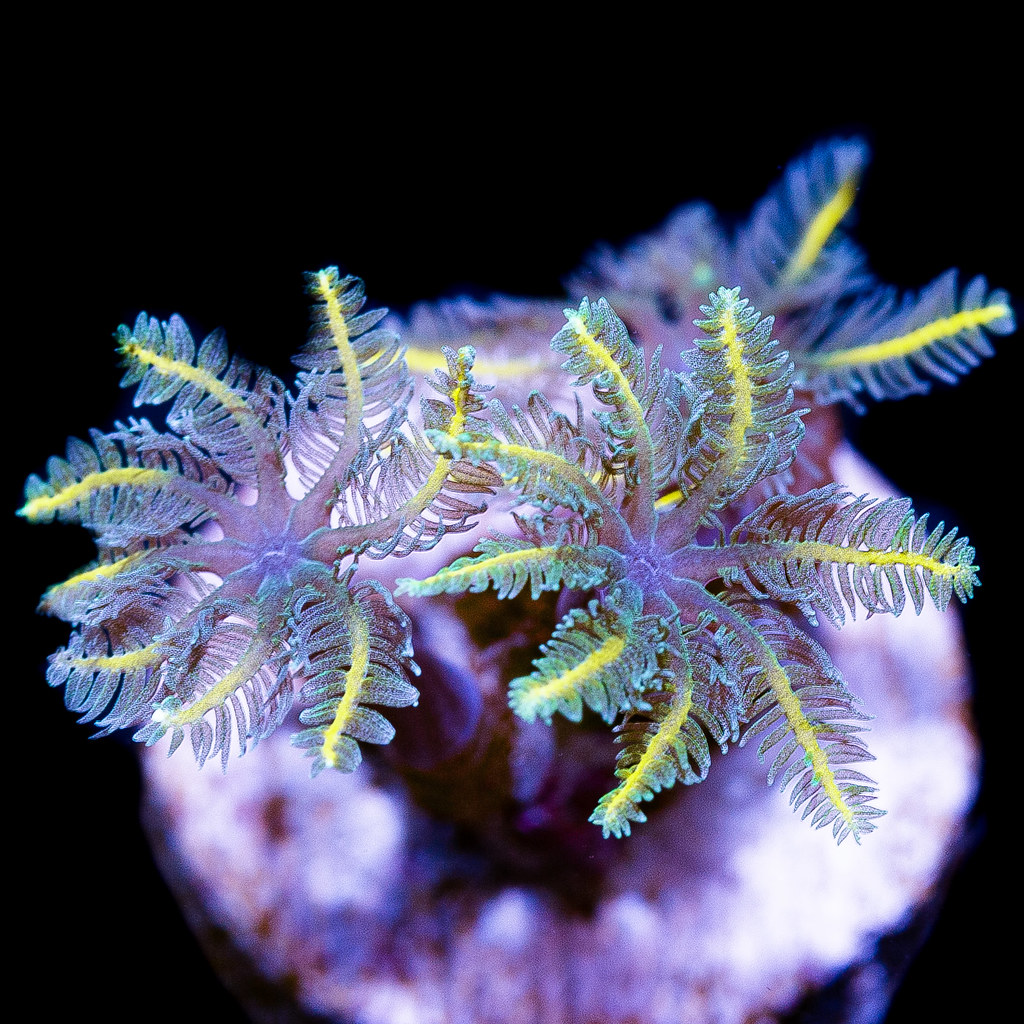 Texas Rick said:
Message me a price list on the corals that I have reposted please
Click to expand...

Hey Rick! I keep the website pretty updated. You can find all names, prices, and even a brief description and care level for the corals on there.
OP

Just another mixture of some of our more hardy zoanthids, with one little Vivid's Gushers appearing on the far left! 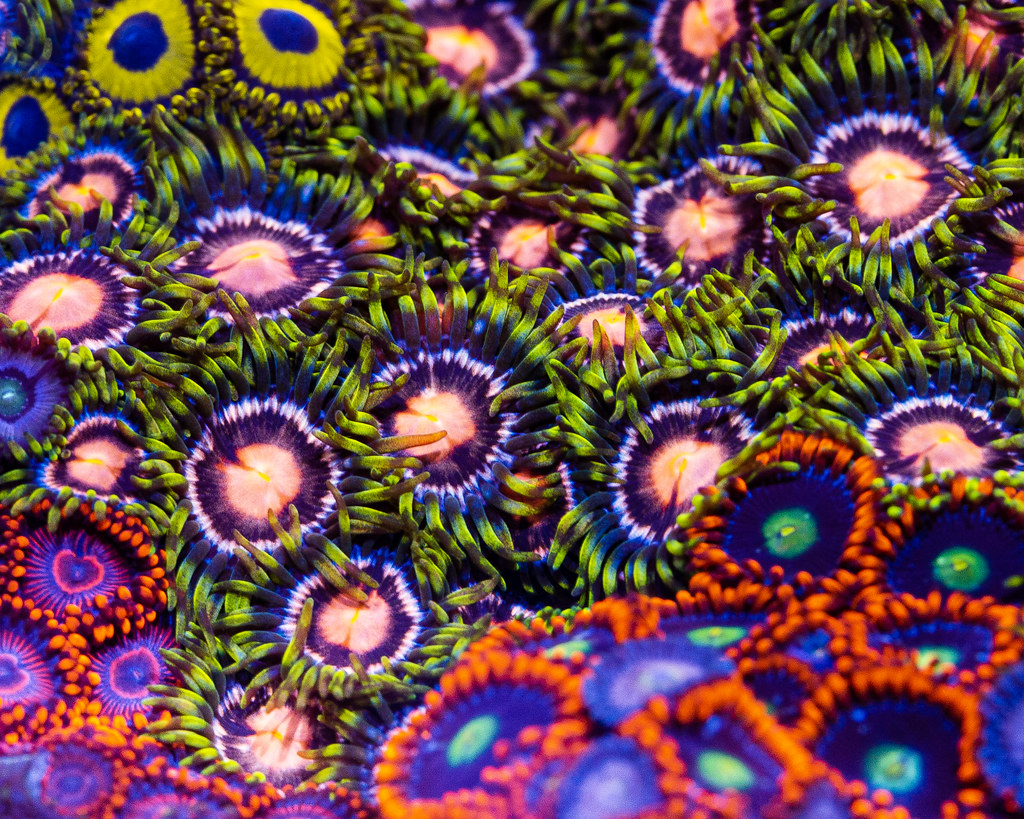 If you enjoy WWC Twizzlers, then you're in for a treat with this morph! LC Havocs Zoanthids have a blue-purple sheen over the body with bright green contrasting skirt tips. Definitely a unique piece for those looking to keep something a little different.

Edit: We've had these for a few years now and have been referring them to as LC Havocs, but it looks like they're pretty much the same thing as another morph called Candy Crush. If you guys know them as such, we'll address them as Candy Crushes to keep the confusion of the name game low. 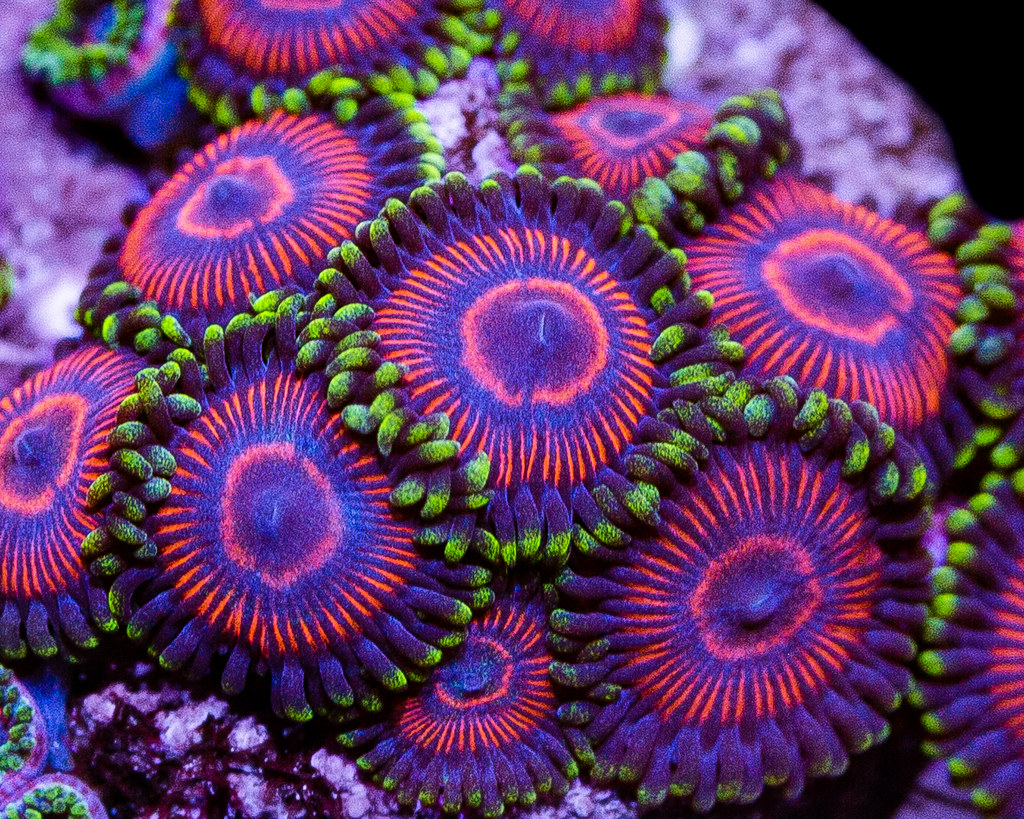 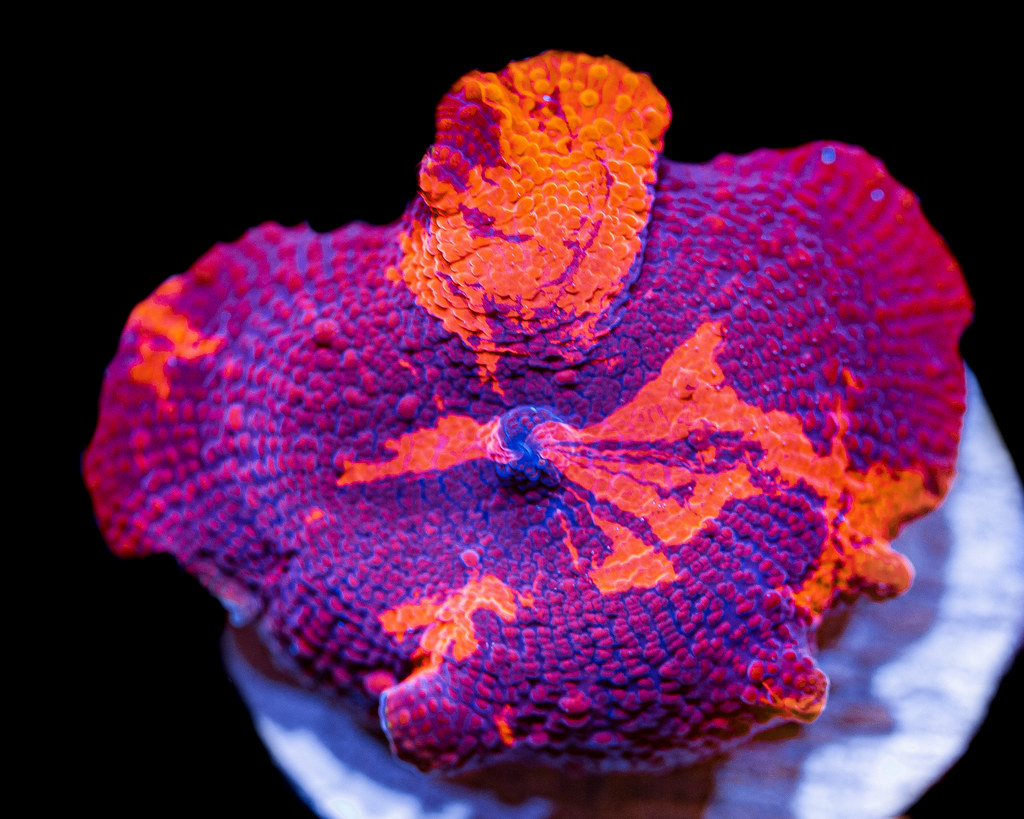 One of the most sought after mushroom corals at the moment, and it's no surprise. The chaotic black and purple splashes along the body is a trait not seen in many corals, let alone a mushroom coral. The babies themselves come out as all red, and the chances of them gaining the splashing color patterns isn't guaranteed. Regardless of the pattern, the red is extremely brilliant and gorgeous on its own. But for the ones that do develop it, they'll become a masterpiece.
OP

The original Jawbreaker/ Tye Dye. RIP to my foolishness of not owning a controller on my personal nano reef. One malfunctioned Cobalt Neotherm Heater led to the slow death of my precious fish and corals. I haven't set up a personal reef since.

Anyways, past the sadness, one of my older articles I wrote 4 years ago has come back up to light after having a discussion with a fellow R2R-er on his thread. I thought it would be great to add it to this thread as well.

I did a lot of digging back then on the origins of Jawbreakers and the much sought after "Tye Dye." Here's an excerpt from it.

This came from Kmaintl, who had very close relations to the origins of the Jawbreaker. I assumed that the original Jawbreaker came from a shop in Milpitas, California called Aquatic Gallery. The owner was Dr. Li, just to give context on how his discussion starts:

"What you state is correct. I never disclosed Dr. Li's name nor the first hobbyist that purchased the original mother from Dr. Li because he asked me not to and I respected his wishes. The first hobbyist that owned the Mother Jawbreaker (assumed it was named by Dr. Li as he was first to receive this import around 9 years ago now) was one of my customers who purchase reef equipment and I purchased some corals from him for my other customers. He shall remain nameless until he changes his mind and would like to reveal his identity. He lived in San Jose area and I still remember the month he brought the Mother Jawbreaker home, my jaw dropped when I saw it. So, the name for the mushroom was appropriate.

My colony is shared ownership with my son-in-law's younger brothers and we still have our original 1st daughter that was produced by the original Mother Jawbreaker that now resides with Zack at TDF. Since we've owned the colony for 9 years now, we've kept at least 9 granddaughters with nice amount of green and one of them actually had purple before that tank crash and we lost her. 2 years ago, we split the mother colony among the 3 partners and each has several green polyps in their colony. We still keep a mother colony where we frag out for sales, so we do have frags throughout the year. The zoo location is SF is where our mother colony is located.

The 2nd daughter went to a hobbyist in Sacto area, who sold it 3 years ago when he was relocated to Hawaii. He sold everything before moving. The 3rd daughter is still in the San Jose area and I don't know much about the history behind the 3rd daughter. But as of 3 years ago, the hobbyist that owned the original Mother Jawbreaker said the 3rd owner never dropped a baby, just got very big and happily settled in one place in his tank.

Getting back to history, Rommel made the San Jose hobbyist an offer he couldn't refuse (to this day my San Jose customer regrets letting go of the Mother Jawbreaker) and Rommel flip it and sold to Zack at TDF. My only regret is seeing the original Mother Jawbreaker escape from the West Coast. Zack didn't know that the Jawbreaker already had a name and said that Rommel referred to it as a mystery mushroom, unknown and one of a kind. So, Zack named it Mystery TieDye as that's what the Mother looks like.
There is at least 3 lineages of mushrooms called Jawbreakers and that's what makes it confusing. Unless yours leads back to TDF's Mother, you don't have the one that grows to about 5"-6" across, comes in with green and purple as it matures. The other lineages that came in about 9 years ago only grows to about 2"-2.5" and only red and orange. The lineage that came in about 2 years ago is smooth and small, but has the 3 colors quickly. The newest lineage also faster grower. HTH so, yes, one of Jawbreaker lineage is the same as the Mystery TieDye, not the others. "

It took a bit of digging, but I heard/read somewhere that Mark Poletti found his piece at a LFS, before the whole Jawbreaker deal came to light. His is most likely another strain, and is actually the majority of Jawbreakers available in the hobby to this day. I might be wrong about this though and it's just an assumption until Mark Poletti confirms it himself. But Mark's a legend in our part of California and no one else could have grown them like he did. He's done a remarkable job of growing and getting this beautiful coral out to the world instead of making it exclusive. The hobby definitely has much to thank him, otherwise the Jawbreaker would just be another beautiful coral that slowly withered away in tanks. 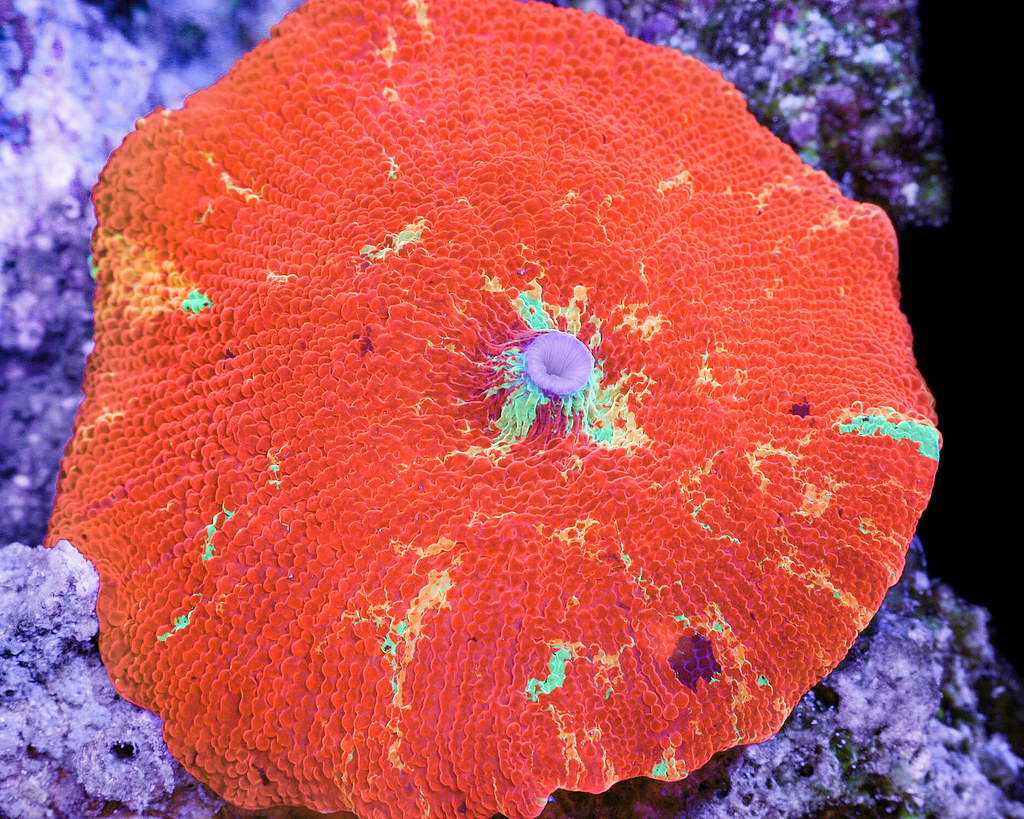 One of the most sought after mushroom corals at the moment, and it's no surprise. The chaotic black and purple splashes along the body is a trait not seen in many corals, let alone a mushroom coral. The babies themselves come out as all red, and the chances of them gaining the splashing color patterns isn't guaranteed. Regardless of the pattern, the red is extremely brilliant and gorgeous on its own. But for the ones that do develop it, they'll become a masterpiece.
Click to expand...