mehaffydr said:
This is got to be the worst part of s plywood build.
How many layers of fiberglass do us use?
Click to expand...

I did 3 layers on the walls and 6 on the corners. 6 layers of Epoxy and then 3 layers of pond armor. In my opinion none of that was structural, just to keep the water out and the seams from busting. The wall I built around the tank is what keeps it from Bowing.

Keep up the good work!

IIRC, and I could be wrong but I think polyester does not hold up long term immersed. I used epoxy, the kind used to build boats.
OP
M

IIRC, and I could be wrong but I think polyester does not hold up long term immersed. I used epoxy, the kind used to build boats.
Click to expand...

I used polyester because it is not as brittle as epoxy. This will be coated with many layers of epoxy paint so water should never touch the fiberglass layers.
S

You have a heckuva build going, can't wait to see it finished!
BTW, I've wailed on a mistake piece of wood with a layer of epoxy with a hammer just to see how tough it was. It was amazingly durable and did not seem brittle at all.
OP
M

Well didn't get a lot done this week as we went out to the lake camping and just got home last night. I did sand the entire inside of the tank today with 60 grit paper and I put another layer of fiberglass and resin on the entire bottom so that's coming along good but they are saying cold weather this week which may stop my progress for a few days. I have to keep windows open because of the fumes from the resin and when its getting into the 20's at night that will be too cold for the resin to cure.
But I did have a good weekend spending money on Black Friday deals.
I bought some things I have been waiting on.
COR 20 return pump
WAV powerhead I now have 7
100 lbs of Marco rock
Marco Aquascaping Mortar
Energy Bar 832
Max Flipper floating glass cleaner
Various 6 skimmer pump

Making some progress but a little slow with the cold weather. Its hard to have warm enough temp for resin to cure and good ventilation. I did manage to do some sanding and I had a couple of air pockets in the fiberglass that I sanded down and filled in but it will be the weekend before I get to do more fiberglass work. So with the down time I figured its time to finish panning some of the important details. Like water flow and lighting.
First though let me show you some of the goodies I have been accumulating over the last few weeks and some nice BRS black Friday stuff.
This is a list of my water movement equipment.

I'm thinking I will use both core 2-20 for return that will also supply the refugium this way even if one stops I will have water circulation.
I'm thinking the 8 wavs space along the back and 1 side with random patterns and the reeflo on a closed loop and using some timer plans I should be able to have more than enough water movement and also make sure there are no dead spots. 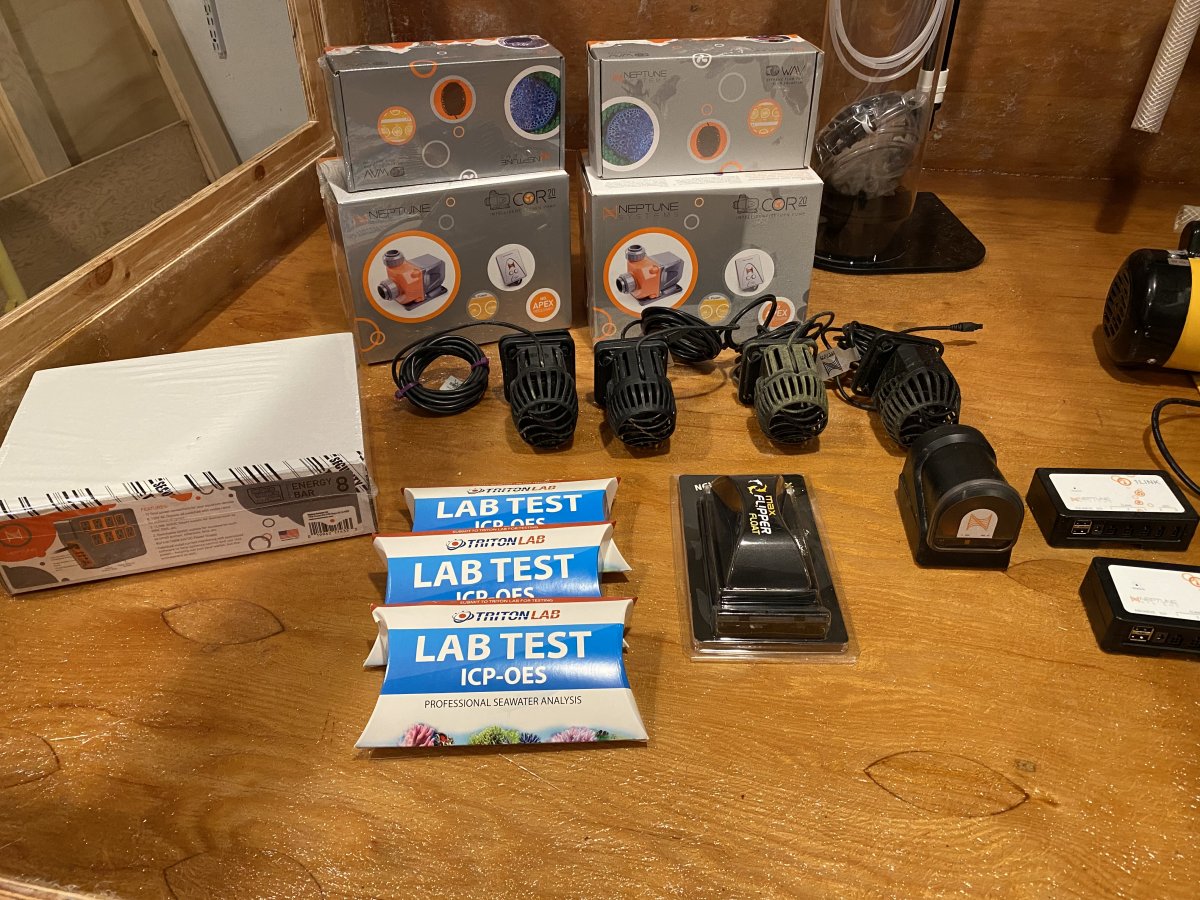 I also bought another EB832 energy bar just to be sure I have outlets for everything.
I got a Flipper magnetic floating glass cleaner to keep the viewing area clean as it would be difficult to reach down 36" deep.
I also picked up some ICP tests which I have never used bit always wanted to just to get a good idea of real water quality.
I have a Neptune automatic feeder that I already had but didn't use much that I will be using on this tank
I recently bought a GEO's calcium reactor that has never been used from a reefer on R2R It may be a little small for tis tank but I also have a DOS an DDR so I will experiment with the reactor and dosing. I have never user a calcium reactor before so this is also new for me. 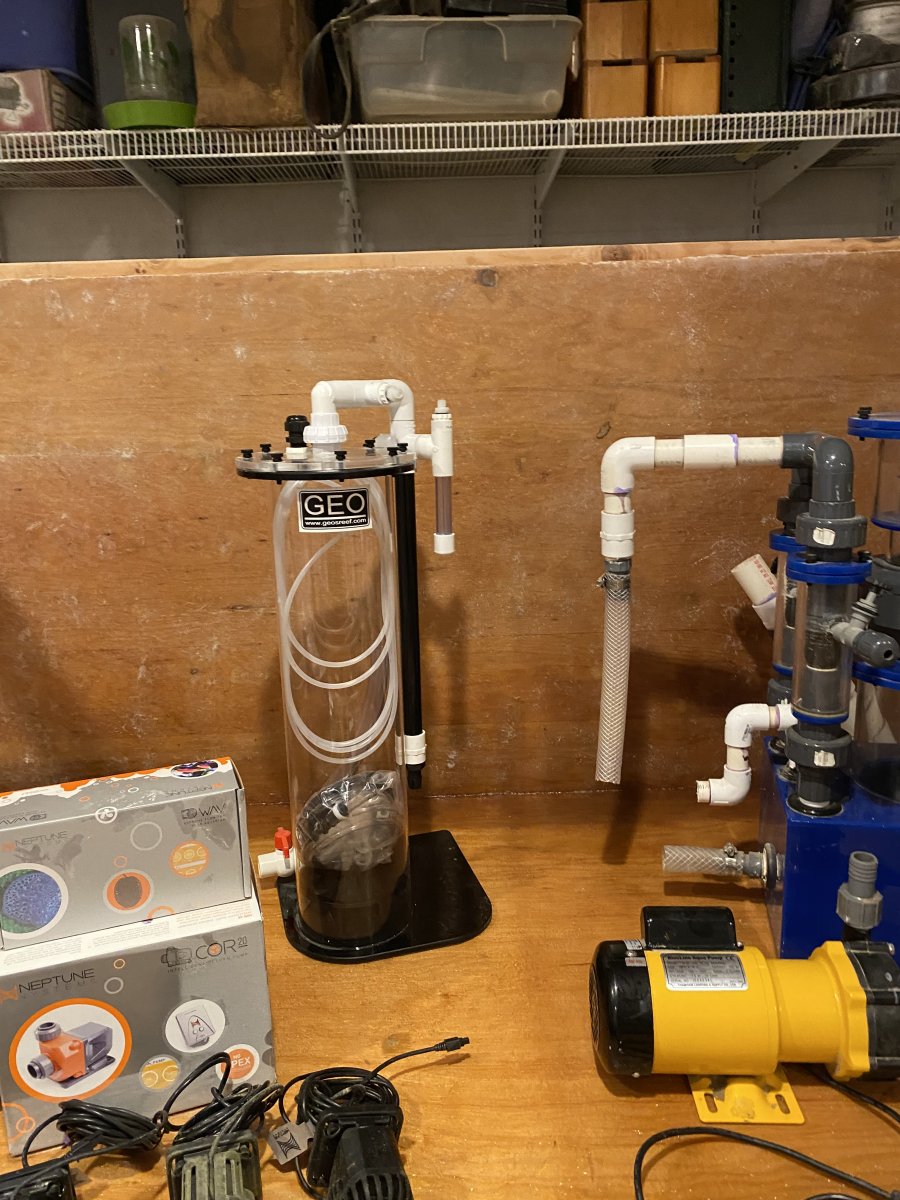 Next up is skimming. I have a MRC-2R that is powered by the Blueline pump. This was on my old system and it is a beast of a skimmer but I also have a Bubble Magnus Curve B10 if I need more. Its curently skimming the stock tank that is temporary housing for my fish, corals and rock from my old system. 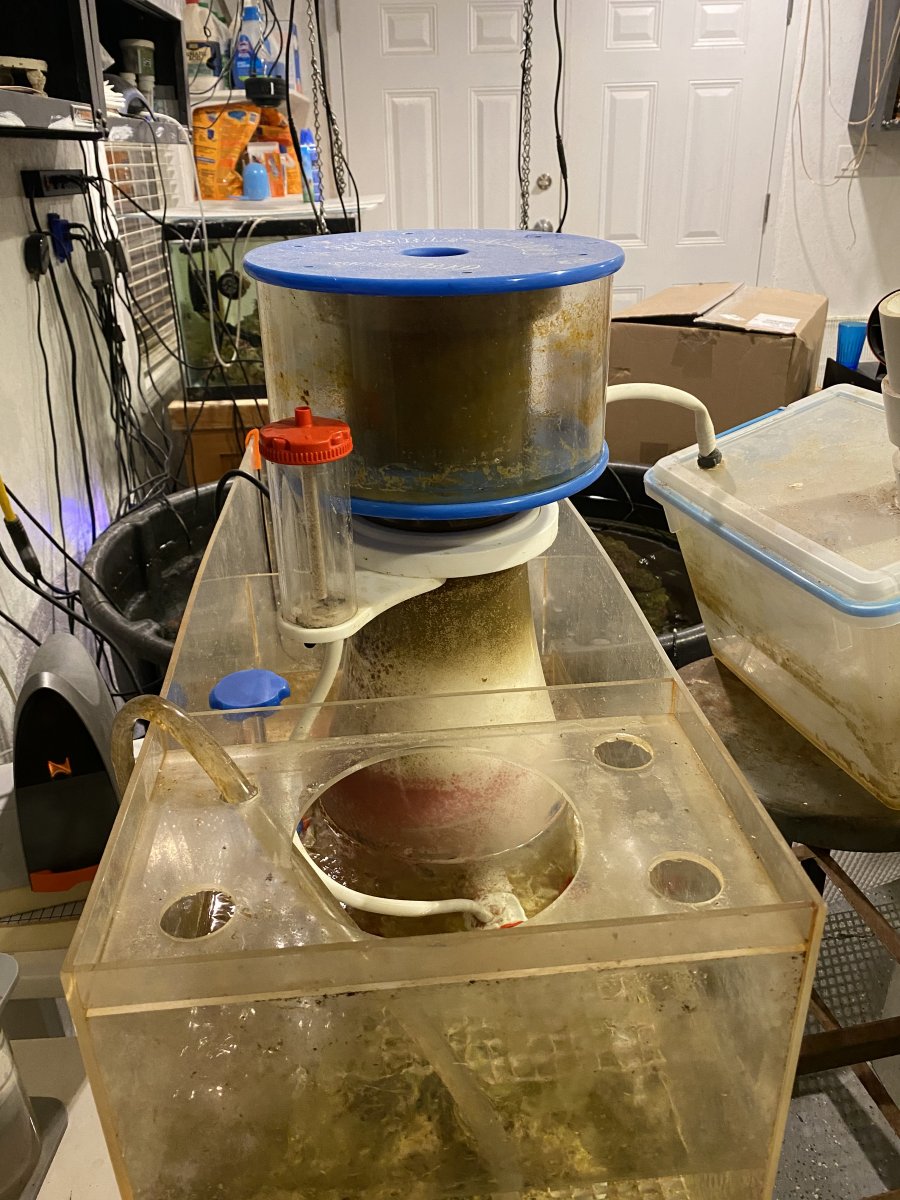 Another thing I purchased from BRS on Black Friday was 100 lbs of Marco rock. I had never purchased it before so was not sure if I would like it. I should have bought 200 lbs. It arrived today and I am impressed. It looks great and I got nice big pieces. Along with a bucket of Marco mortar for gluing rock together. 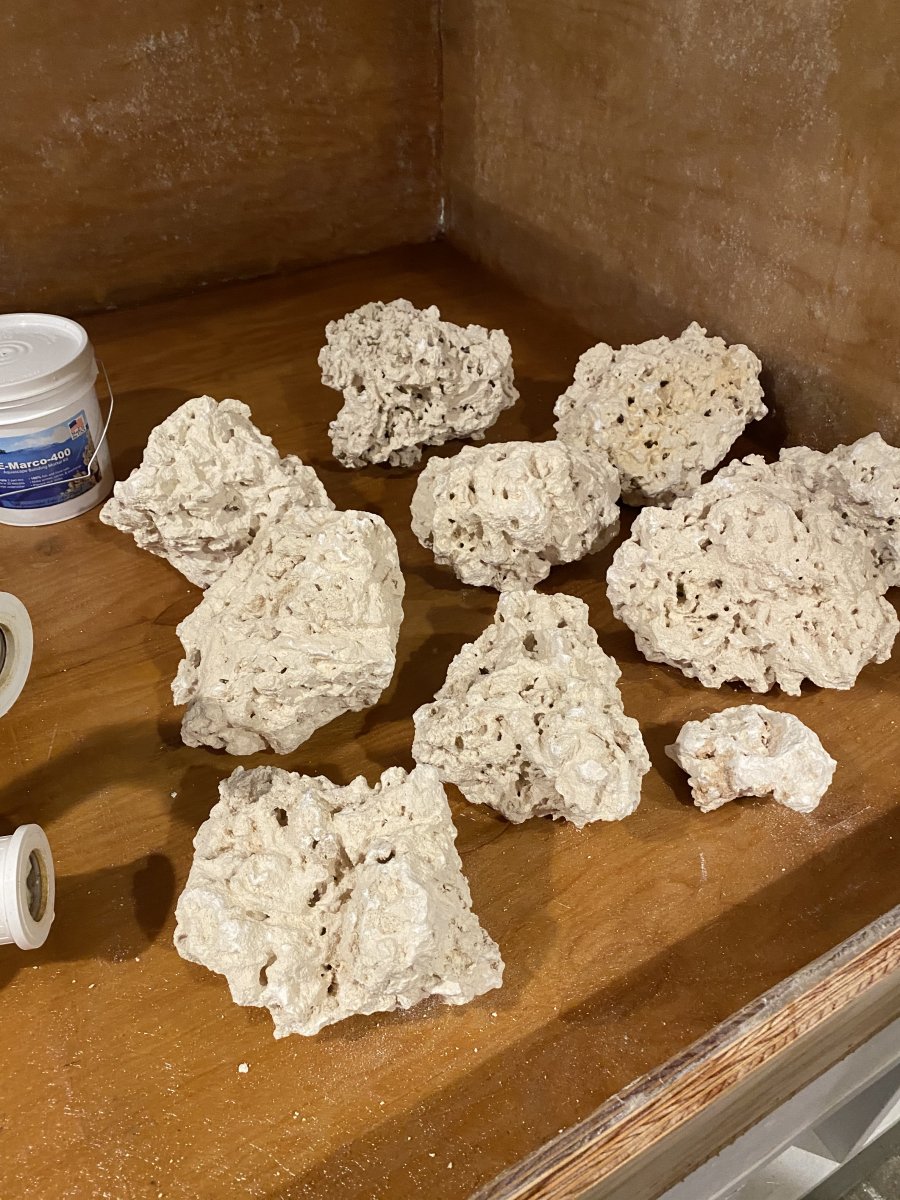 So for the next couple of nights I will be drawing up plans for placement of the Wav's and the closed loop intake and returns. With the way I doubled up all of the walls with 3/4" plywood which will be too thick for the magnets I will need to router out some recesses in the outer layer to get the plywood down to about 1" thick where the WAV's will be placed. Before I get finished with the fiberglass and start with the finish coats of epoxy paint I will need to drill holes for all of the Bulkheads and with the closed loop and the drains to the sump and returns I will need 12-15 bulkheads. So still a lot of work to do and I am pretty sure at this point I will not make my original goal of having water in this tank by the end of the year but that's OK better to focus on quality than hurry and mess it up. 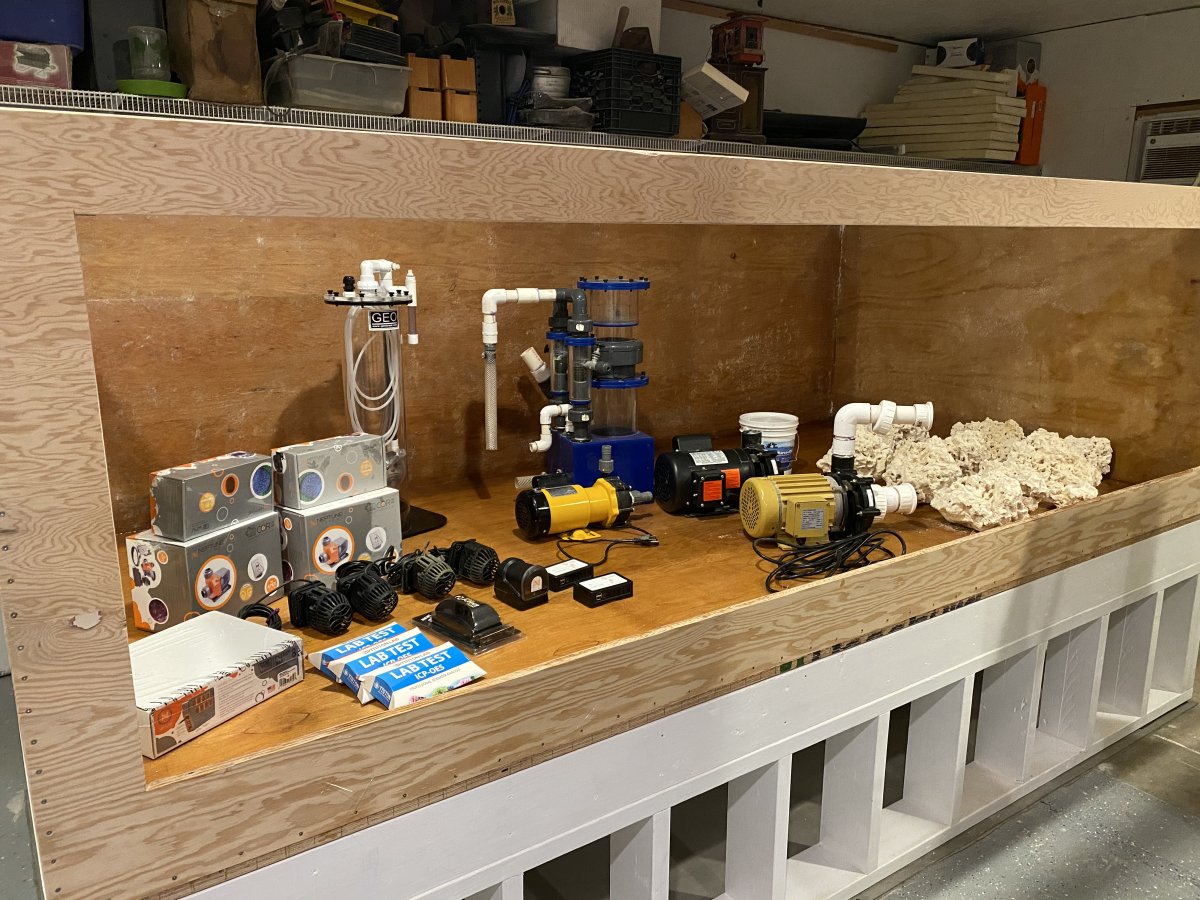 Instead of routering the walls, why not create some sort of acrylic insert so you could put the pumps anywhere? Then you just clamp that to the wall.
OP
M

McPuff said:
Instead of routering the walls, why not create some sort of acrylic insert so you could put the pumps anywhere? Then you just clamp that to the wall.
Click to expand...

just ordered a magnet that is rated to hold 42lbs. I’m going to give that a try and see if it can hold through the plywood.
Thanks for you idea I’m thinking about how to make that work
They also have much stronger magnets but I thought this was a good starting point
Last edited: Dec 3, 2020

Slowly making progress. The weather warmed a bit in North Alabama today up to around 50 deg. This was just enough for me to open up some windows and turn on a fan after work today and add a layer of fiberglass to the back wall. If we continue to have these temps I should be able to complete that fiberglass work this weekend and then start preparing for epoxy paint.
OP
M

I know its a little premature but I have been thinking about stocking plans and sometime over the next couple of weeks I am going to start up a quarantine tank. I already have a few fish from the old tank but of course this monster is going to allow me to have fish I could never have in the past. I do love tangs so there will defiantly be a good selection of tangs, I'm also a big fan of the pygmy angels but there's always the concern for nippers with those. I am thinking I would like 5-10 blue reef Chromis and 5-10 Pajama cardinals. I will be leaving a lot of open space for swimming as I think the one thing I've done wrong in the past is put too much rock in my tanks and there always crowded, I want this one to have a lot of open space. Any help here appreciated.

Oh the current fish that I do have are.
Powder Brown Tang
Sailfin Tang, Desjardini
Potters Angel
Green Mandarin--eats frozen like a champ
M

Such a cool build. Love seeing people's creative side, and do things different from the norm. Following!

This is gona be awesome great work
S

mehaffydr said:
I want this one to have a lot of open space. Any help here appreciated.
Click to expand...

I was thinking the other day how nice a 5x10 footprint would be, not that I'm complaining about my 4x8 haha. I would do things pretty much the same but that extra space would be sweet.

I made a frame from PVC pipe the shape of an inflated sail on its side, then put rock on it to resemble a boulder. It's about the size of a laundry basket and looks real. It's on the right side. Hidden from view under the frame are 3", 2" and 1 1/2" PVC pipes for bolt holes for fish. I got lucky and was allowed to bring home a big gorgeous fossil coral head from Kuai and set it a little off center as my centerpiece. I plan to put a mag anemone on it. Finally, I have a smaller fossil coral head about the size of a football to the left side and in the back.

I also made a faux volcanic wall by pouring mortar panels about 18-24 inches wide for the back and sides. With vertical ridges, it was easy to make it look seamless. I have diagonal ridges that run from panel to panel. I laid them out on a ping pong table for sculpting. I found that after about 14 hours, I could carefully remove the blank panel from the mold without breaking it and it was still soft enough to easily cut and shape. I used layers of Styrofoam to get the general shape, then when placed next to the other panels it was easy to do the final shaping. I made sure there were no perfectly plumb or level lines. I kept them damp for a week then let them dry completely.
They caused a pH spike that I broke with Muriatic acid. They hide my powerheads. When I installed them, I leaned some a little forward and others a little backward to avoid plumb walls. Pond foam was helpful there. It allows for a lot of hiding and sleeping places.
OP
M

Today I really started getting serious about getting this build complete. I ordered what was the most expensive single item and crucial to the completion. I had contacted @glasscages.com couple months back and they were very helpful. So today I actually placed the order for the glass. I had held off because I wanted to get into this point so that I was confident that the glass sizes were set and could not change. 2 pieces that should be approx 500 lbs. 3/4" LIG. they estimated approx 3-4 weeks so with the remaining fiberglass work, Epoxy paint and top bracing the timing should be about right. I am thinking water test around mid January.

This. Is. Amazing. Can’t wait to see what’s next!!

M
does anyone in North Alabama need a 225gal acrylic tank