My tank is about a year old. About 8 months ago we added two of these red and green RBTA's and they thrived and now we have about 10 of them. However, for the last few months they have been looking droopy and stringy (see picture). They do still seem to eat when fed mysis.

The tank was somewhat neglected and was overrun by cyano which was then removed by chemiclean, but then green algae took over and was left to get out of hand and now I am working on getting rid of it. Dissolved N and P have probably been very low for months due to all of the algae.

The anemones are getting 300-450 PAR from a custom LED (same spectrum as radion). They get good flow from a Jebao pump. They are in a 29 gallon tank that is plumbed into my 150g system. Light and flow have not changed over time.

temp 78-79 F
SG 1.026
Alk stable around 8
Ca, Mg stable and normal
Nitrate has been zero for the last few months (Salifert low range)
Phosphate has been around 0.01ppm on the Hanna Ultra low range

Water changes (all from the same box of Reef Crystals) and starting red sea trace elements (ABCD) have not helped.

My plan is to continue aggressive algae removal while feeding reef roids and heavily feeding the fish to get N and P detectable.

I would really appreciate if you could look at the picture and let me know if you have any ideas. 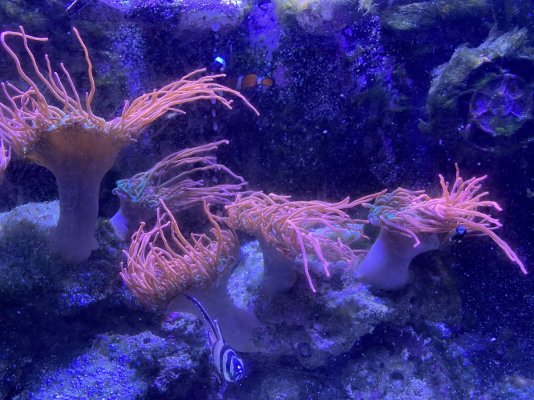 Do you recall having higher po4 and nitrates prior to their decline?

Stop doing water changes, add a PolyFilter for addressing any dissolved issues that might reduce water quality, and let the tank cruise for a bit. The nems don’t look terrible and they will probably like a little rest from the constant changes you have been making trying to force the algae into submission.
OP
R

Dolphins18 said:
Do you recall having higher po4 and nitrates prior to their decline?
Click to expand...

Yes, I used to test nitrate about once per month and would add sodium nitrate to try to keep it above zero (usually 0.2 - 2ppm). But then in April nitrate was 25 so I stopped dosing it altogether. And in the subsequent battle with cyano and green algae i kind of gave up on testing for nitrate. I guess it seemed dumb to add nitrate while fighting algae, even if nitrate was zero.

I showed this picture to the very knowledgeable LFS owner who sold me the nems, and he said it looked like they were reaching for light. But now that I have measured 300+ PAR I dont think thats the problem.
OP
R

KrisReef said:
Stop doing water changes, add a PolyFilter for addressing any dissolved issues that might reduce water quality, and let the tank cruise for a bit. The nems don’t look terrible and they will probably like a little rest from the constant changes you have been making trying to force the algae into submission.
Click to expand...

Ok, thanks for the advice. Sounds wise. I forgot to say I also filled my BRS reactor half full with carbon about 2 weeks ago, no improvement since then. But Poly Filter does a lot that more than carbon I guess. I will try to find some ASAP.

They look fine. BTA tentacle bubbles or lack thereof are not an indicator of health.

Zeros for either nitrate or phosphate is always a bad number, stuff starves, bad guys flourish.

K
5 nems are not doing good. Looking for advice