Hey everyone! Decided to start one of these build threads to track the progress of my first tank as I go. Still cycling currently, doing a fishless cycle with ghost feeding and I added Fritz TurboStart. The TurboStart seems to be working fairly well, I never even saw a spike in ammonia levels from the API test kit. It was somewhat hard to tell what the Ammonia levels were with that test kit (it's not that good) but I suspect they went up to .50 ppm, and I now have rising nitrite levels at about .50 ppm and Nitrate at roughly 2.5ppm (again, API test kit sucks lol, can barely tell the difference between 0 and 5 ppm) so gonna just keep adding fish food and waiting haha. Planning on getting a pair of clowns once the tank is cycled, still deciding on the other fish but I may get some Gobys, those guys seem pretty cool. Also looking at the fire shrimp and emerald crabs. As far as corals I think I am just gonna stick to the soft corals for now (especially zoas, those are awesome) until I figure out what I'm doing a little more and maybe upgrade the lights for some SPS!

Might be picking up a wavemaker for my birthday this weekend (Happy Birthday to me!) Looking at either the Aquamai KPS or the AI Nero 3, kind of leaning towards the Nero 3. Also looking into the Intank modifications for the media basket and refugium for this tank, because the included media basket for the biocube is super frustrating to use! So far everything is going well though, guy from the LFS who used the TurboStart in his tanks says that I should only have 6-10 days left to cycle, hopefully he is right! I'm super excited to start getting some creatures in here. Here's the pics! 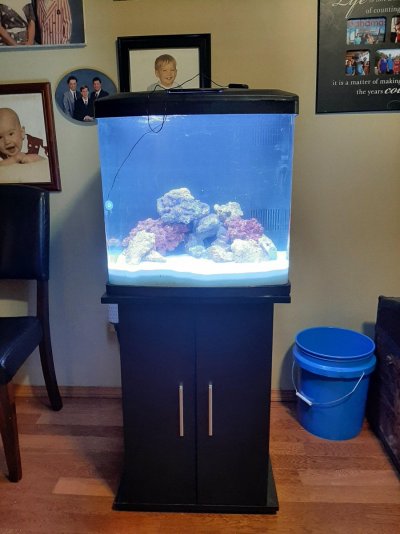 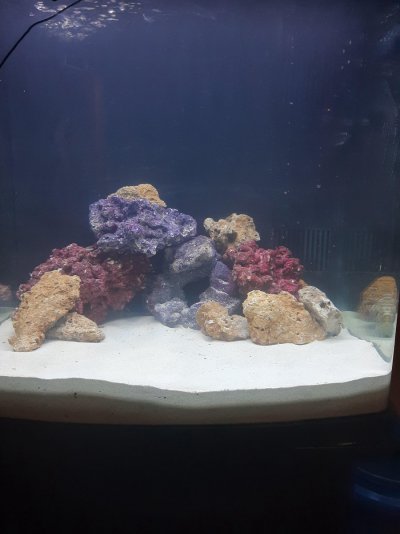 What works for me is to use an LED light panel from Amazon for the refugium. I use only filter floss sheets for mechanical filtration, the Biocube filter cartridges are just overpriced for what your getting.
OP

Alex Cataldo said:
What works for me is to use an LED light panel from Amazon for the refugium. I use only filter floss sheets for mechanical filtration, the Biocube filter cartridges are just overpriced for what your getting.
Click to expand...

Yeah for sure, the filter cartridges that come with the tank don't seem to even do much if I'm being honest. Did you remove the hood for your refugium or put the lights on the back panel outside the glass? I'm trying to avoid removing the hood if at all possible.
OP

Here's something cool as well. I went into the lab today and decided to bring some of my tank water to see what I would find. 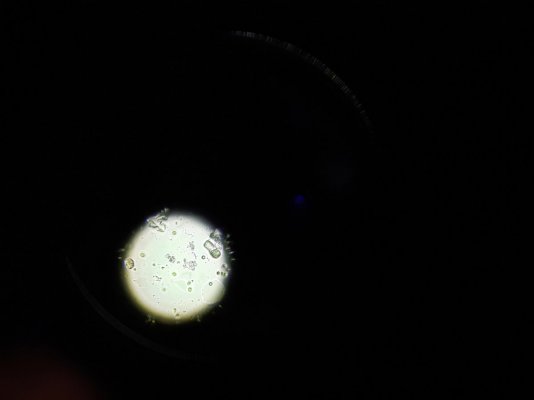 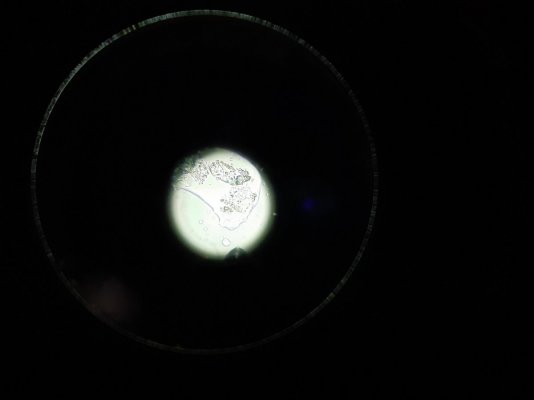 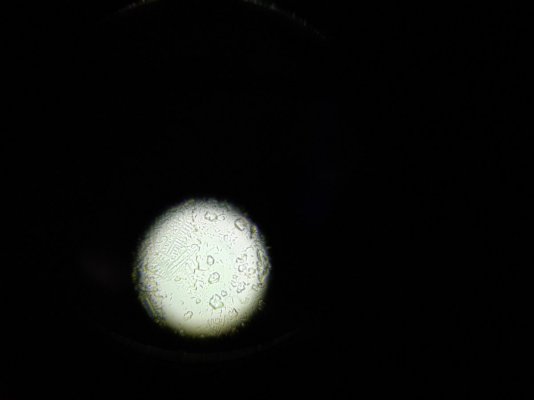 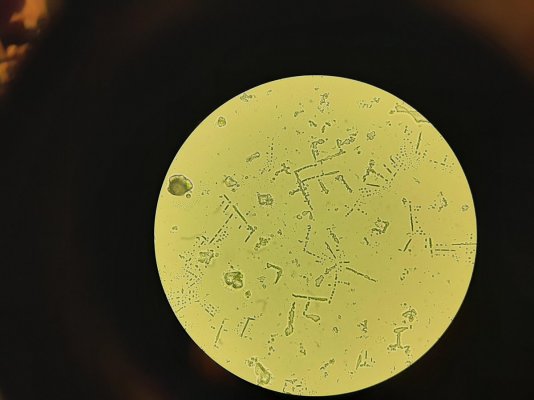 Fairly sure the last two are the nitrifying bacteria but not positive. Still pretty cool though!
OP

Wasn't happy with the scape, so I redid it. 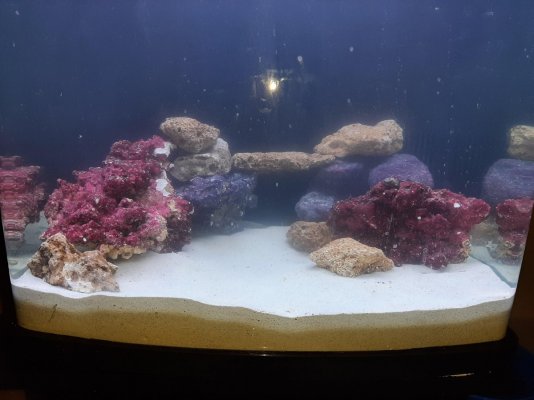 Will probably change it again lol, but I think it looks better than before. Main thing is in the corners I'm getting a lot of detritus, but I haven't added in my powerhead yet so we will see on Saturday when I go to pick up the Nero 3 from my LFS. Hopefully I can work out any issues with flow.

Couldn't wait until Saturday, was in the LFS buying rock today to try out some of those negative space aquascapes I've been told about, and picked up a Nero 3. Don't have a picture right now unfortunately, but man this thing is a beast. At 100% it kicks up everything all around my tank and keeps it circulating. Definitely won't have any issues with flow with this thing. Probably gonna keep it on pulsing/random from 40-70%, seems to not kick up as much sand that way but still gives good circulation. Glad I went with that instead of a Jebao that I was thinking about.

Yeah I really like it so far. Love the simplicity and upgradability

Tank finally finished cycling and got my first critters in there. 1 snowflake clown and 5 of the red legged hermits. Diatoms are going crazy as well lol, I'm thinking I might do another 50% water change to get the nitrates to below 10ppm, as they are floating between 15 and 20 right now.

Starting to think about what clean up crew I want as well. I think I decided on 2 clowns a watchmen Goby and a sixline wrasse as the fish but undecided on the CUC. I'd like some snails to eat algae but I read that the hermits may kill some snails for their shells. Any thoughts on this?

Here's a better video before I got ostracized for vertical video

Went to the LFS and made some additions to the tank! Got a second clownfish and some snails. 3 trochus 3 nassarius and a cerith. Unfortunately one of the trochus died overnight, I think one of the hermits ate him lol. 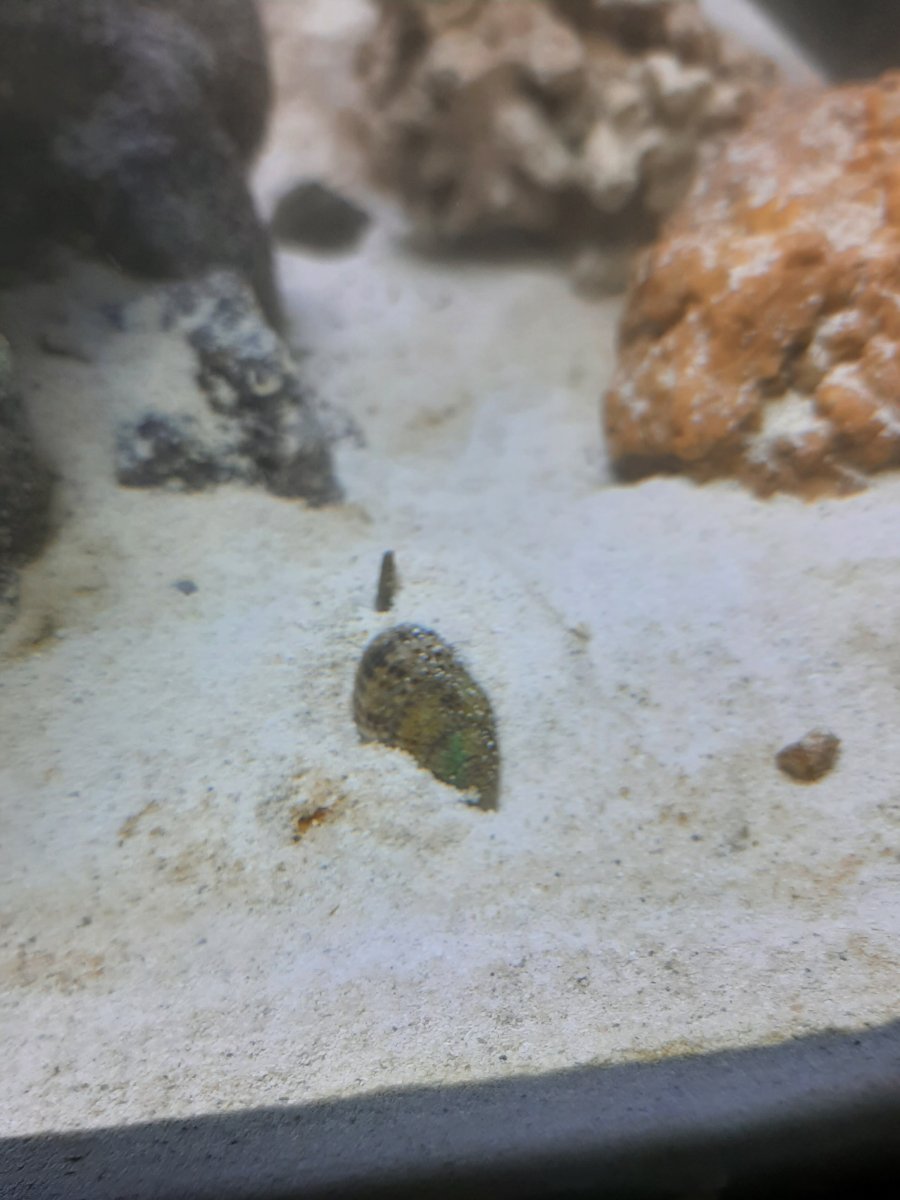 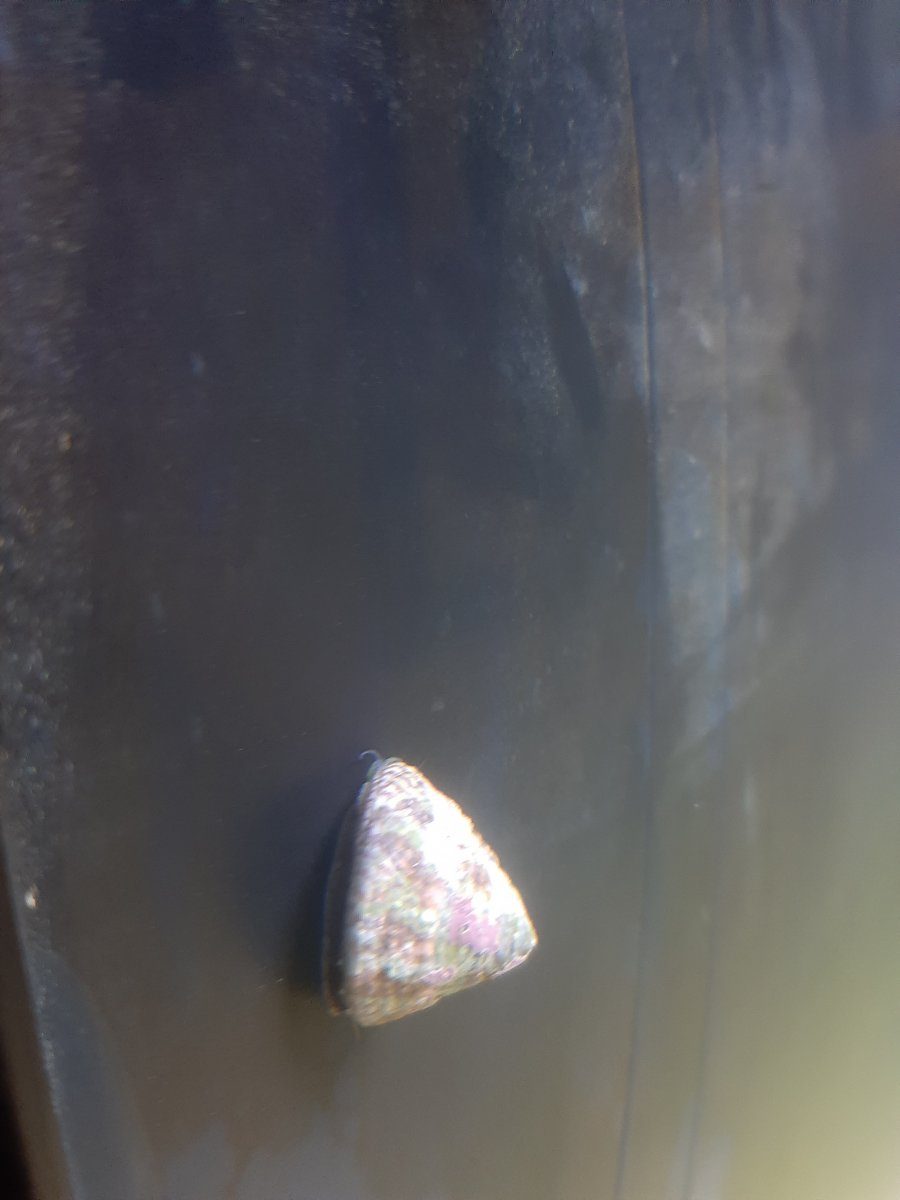 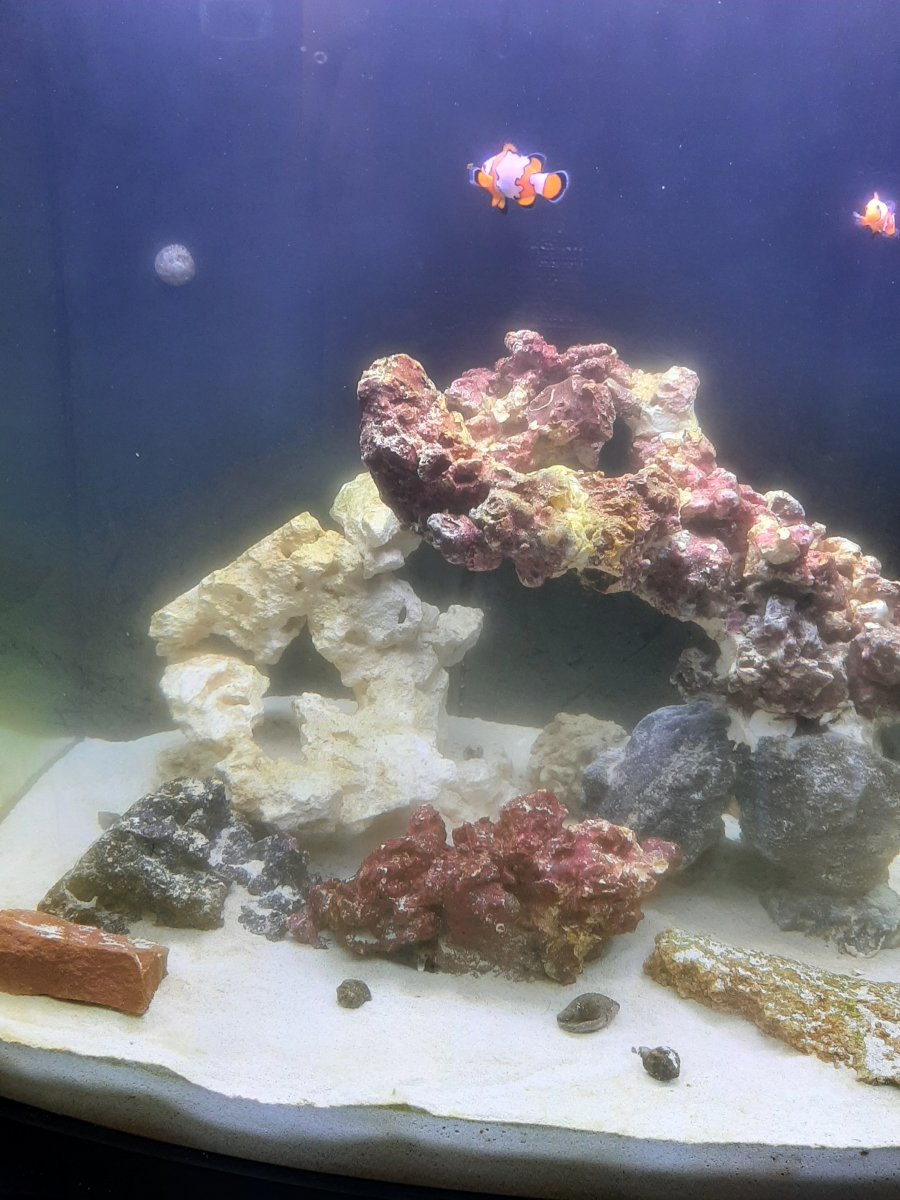 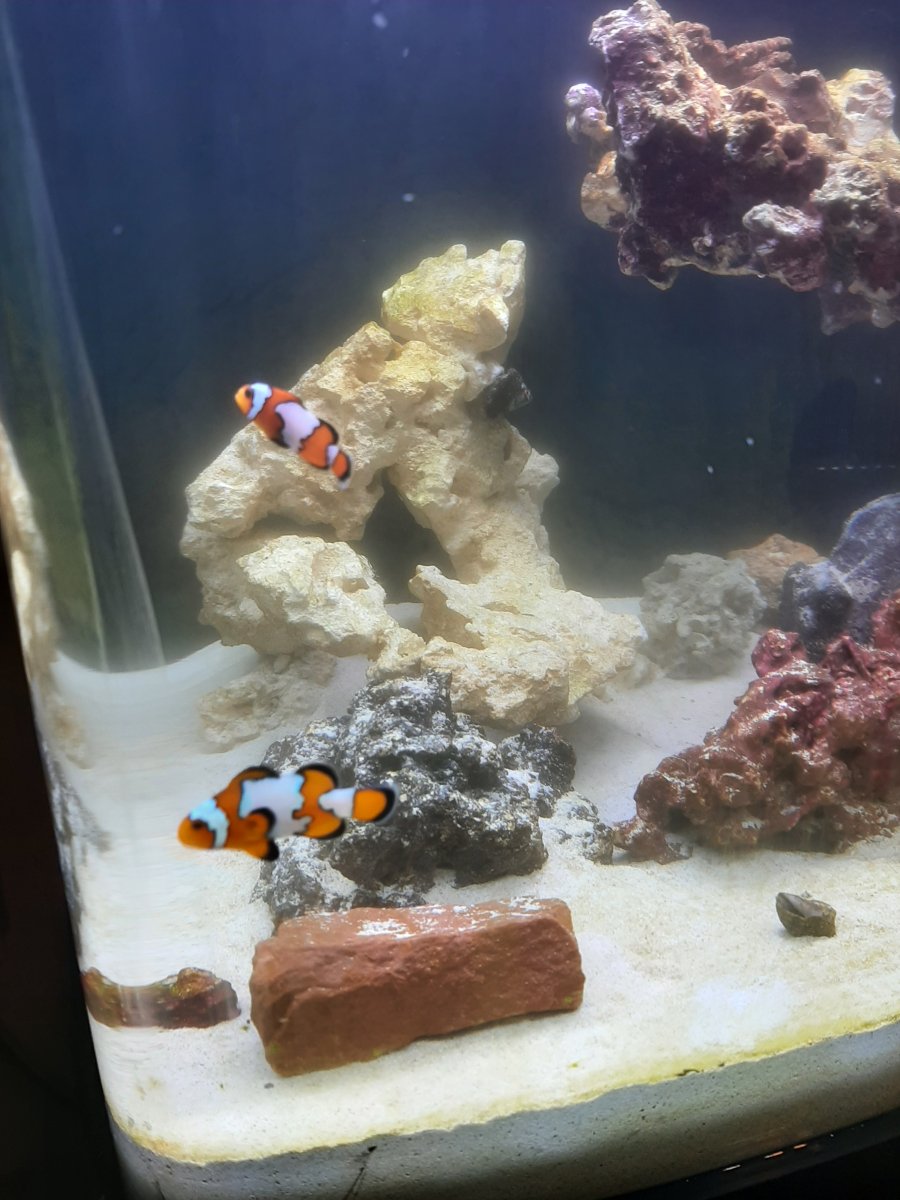 I'm thinking the next addition might be a skunk cleaner shrimp. Maybe a watchmen Goby, I'm not quite sure yet. Might throw a small zoa colony in as well to see how that goes, but I think I will pick up an alkalinity test before I do that. Trying to take it slow so everything is done right and have as little problems as possible lol.
OP

Oh another thing that I thought was funny, when I put my hand in the tank, my bigger clownfish attacks it lol. I don't know if she's eating my dead skin or what but it feels weird. She will just swim at my hand and nip it and swim away and keeps doing that. It doesn't hurt or anything, but it is kind of funny. I'll take a video of it later when I feed them again.

VanJuarez said:
Oh another thing that I thought was funny, when I put my hand in the tank, my bigger clownfish attacks it lol. I don't know if she's eating my dead skin or what but it feels weird. She will just swim at my hand and nip it and swim away and keeps doing that. It doesn't hurt or anything, but it is kind of funny. I'll take a video of it later when I feed them again.
Click to expand...

Just protecting her home lol. Mine dose the same thing. Once in a while the male gets the courage to dive in too.

Brady4000 said:
Just protecting her home lol. Mine dose the same thing. Once in a while the male gets the courage to dive in too.
Click to expand...

Yeah lol. I've noticed she only does it when I go in with the turkey baster, so I've come to the conclusion that she does not celebrate thanksgiving


Anyways, got another update here; with news both good and bad. Bad news is I think my most recent clown that I added has lymphocystis. Pretty sure it isn't anything else like ich because it has been there for a few days and hasn't gotten significantly worse or receded and come back worse or anything like that. He doesn't seem to be showing symptoms so I'm just making sure he's getting enough food and taking care of the water as usual and monitoring for any changes. Here's some pics.
OP 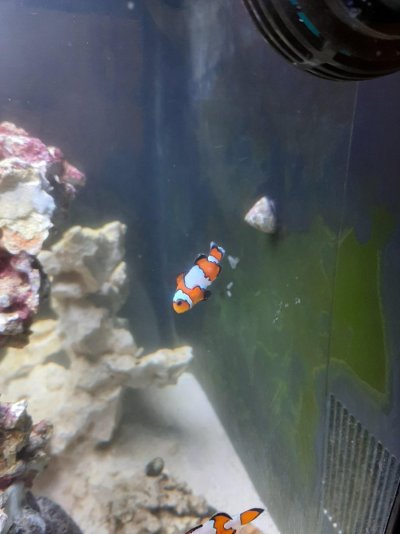 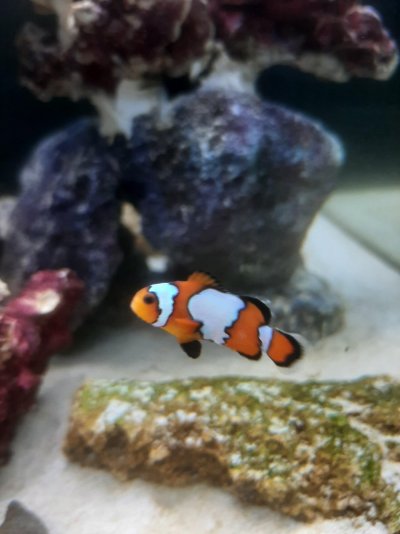 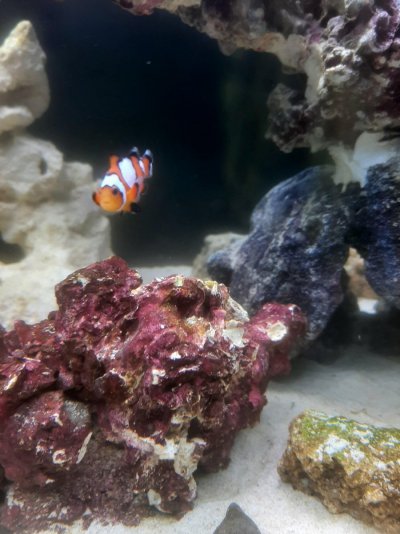 Luckily it doesn't seem to have spread to my other clownfish and he seems to still be doing fine.


Now for the good news! I went to the Facebook marketplace and found someone super close to me who was selling some coral frags, so I went over and picked up a frag from him and talked for a little bit, and he gave me some tips and showed me his tanks so that was pretty cool! I got a small green star polyp from him and it's doing really well! 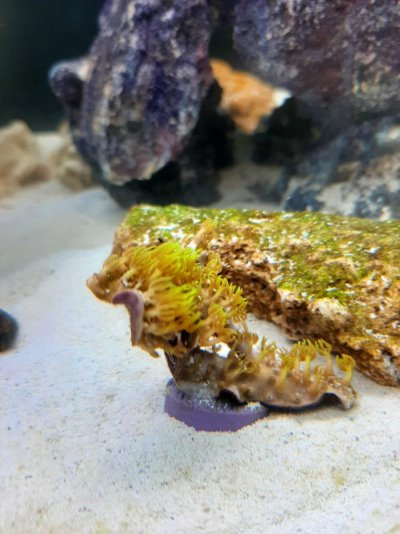 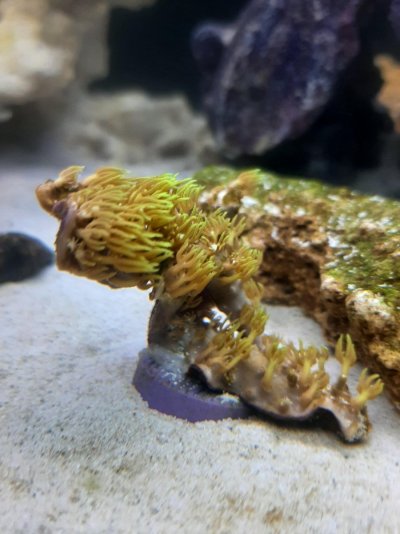 I can't wait for this thing to grow out! I'm already loving being able to watch it sway around in the water current, it looks so beautiful! Makes me very glad I got into this hobby!

Also I just wanted to say watching my tank at night is such a cool experience. I added a little piece of live rock from the LFS even though my tank was already cycled just to see what kind of hitchhikers I might get and increase the biodiversity, and I got a bristle worm! I know some people don't really like them, but I think they are cool, and very helpful to the ecosystem of the tank. I saw him searching for food when I looked at the tank last night. Very cool! 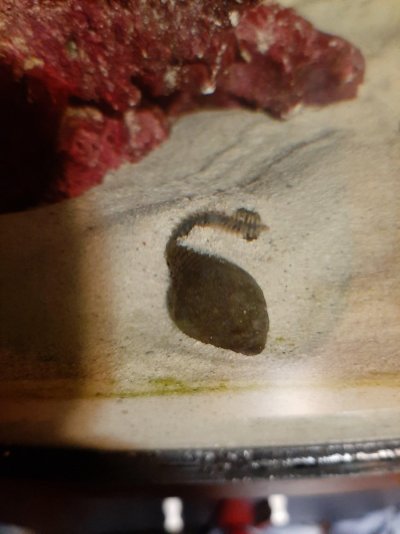 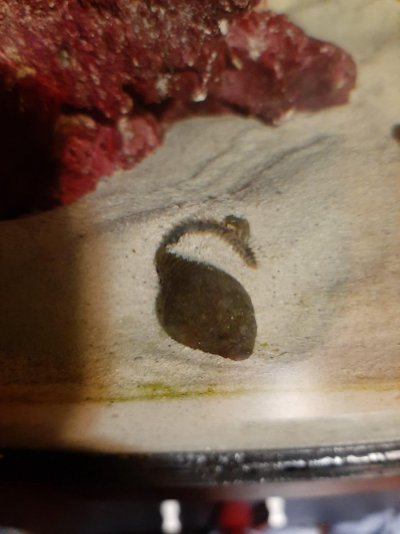 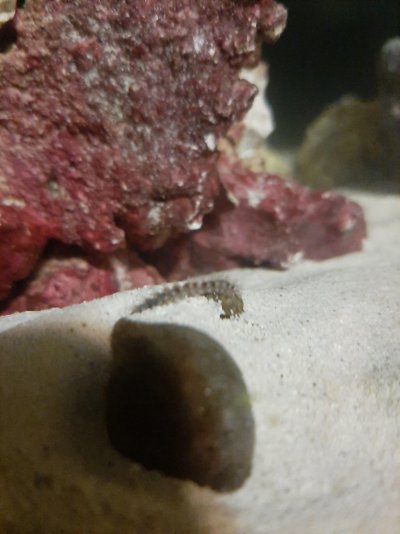 He's a little guy, but hoping to see him get bigger. We have some of these preserved in the lab at my school and they are kind of freaky to look at, our specimens are about 2 feet long lol, I'm hoping he doesn't get quite that big but it would be cool to see one at 6 inches or so.

VanJuarez said:
I got a bristle worm!
Click to expand...

My CUC is about 90% bristle worms, 10% snails. Love them, best CUC ever! Glad you got some in your tank.
OP

For sure man, they are great little critters.