My Biocube 32 tank I was gifted - Dreams do come true

Two weeks ago, a friend of mine decided to get rid of both of her tanks. It’s been at least 30 years since I’ve had my first and last saltwater tank. That tank was your standard saltwater tank. I never thought about having a reef tank until I saw hers last year. I have to say, I was in love but also saddened by the condition of both of tanks. They were filled with hair algae and had no design or artistic quality to them. So for the past year, I imaged how I could put some pizzazz to them and get them all sparkly.

Well like I said, 2 weeks ago my dream came true. She offered to give me her Biocube. Needless to say, I jumped at the offer. After all, who can pass up a free 32 gallon tank? So we put the tank on my garden wagon at 10 at night and brought it home.

After doing some research, I found out that it’s a Coralife 32. It doesn’t have the lid or media basket but it has the stand, a skimmer, heater, power head, LED light (white and black light combo), the reef rock, black gravel, 2 pink anemone, 1 goby, 1 coral banded shrimp and tons of hair algae. There was so much algae that you couldn’t see anything though. I now wish I had taken pictures of it when I got it because it’s so different now. Oh, I also found that there’s a few bristle worms and a couple fire worms the hard way. When my shrimp went into its molt, the dang fire worm killed it. (Could that be the reason why the nitrite spiked? It was perfect up until that happened.

After doing some research, I found out getting rid of the algae was going to take quite a bit of patience since I don’t like using unnecessary chemicals. The first things I did was to take out 3 of the reefs and do a hydrogen peroxide treatment on them. Wow, that worked wonders. Then for the past 2 weeks, I’ve made it a ritual to scrape and manually pull out the algae by hand. I also started doing water changes. The first one was 10% water change with RO purities water and a week later a 25% water change (the store ran out of water ), along with cleaning the gravel. It turns out that she’s never done any of that in all the years she’s had the tank. Unfortunately, since it all happened so quickly, I didn’t have the funds to purchase a CUC or gravel cleaner (but thank goodness I’m part of Amazon Prime, so I had a gravel cleaner in days), and the nearest fish store is a little over an hour away.

After 2 weeks of cleaning and removing the algae 3 to 4 times a day, I think I have most of the algae at a dull roar. I finally was also able to get to town and purchased 3 margarita snails, 2 red leg crabs and 1 pincushion urchin 5 days ago. I know I should have put them in quarantine for 2 to 3 weeks but I figured since I really didn’t have anything in the tank, accumulated them for over 24 hours and since they were doing fine, I added them. I hope I don’t end up regretting that decision.

Anyway, I’m finding there’s so much I want to do with the tank now that I can see its potential. A few of the things I want to do is getting rid of the gravel and putting in live sand to make it look more authentic, scrape off the buildup in the back of the tank and get rid of the tap water. Then I would like to do some sort of cool looking aquascaping. The only problem was that I wasn’t sure if I could do it without hurting or killing the anemones and the good bacteria in the tank.

Then yesterday, I found this forum. After joining and writing up the “meet and greet”, I had some great responses assuring me that I can do what I wish. So now, I’m in the research/planning phase of doing just that. I still haven’t figured out how to do my aquascape without hurting the anemones. I’m finding that I have so many questions. Some of them are:

1. How long can I have the rock out of water so I can create the aquascape and not kill off the good bacteria?
2. Is there a way to remove the anemones from the rock they’re on so I can bust it up?
3. What type of sand is best to use or are all types and brands the same?
4. What type of mortar, epoxy and super glue is best to use?
5. How long can I keep the anemones and goby in the temporary container?
6. if I add in new coral do I need to cycle the tank, if so for how long?
7. Should I get rid of the bristle worms that are 5 to 6 inches long?

Oh, I forgot to mention, I ended up buying the other tank yesterday. So once I figure this tank out and gain some knowledge I’ll have a 165 gallon tank to set up.. 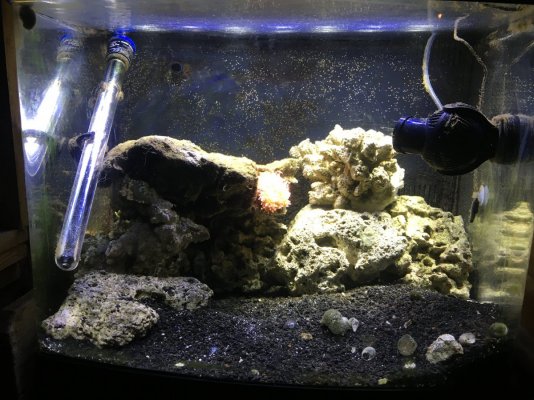 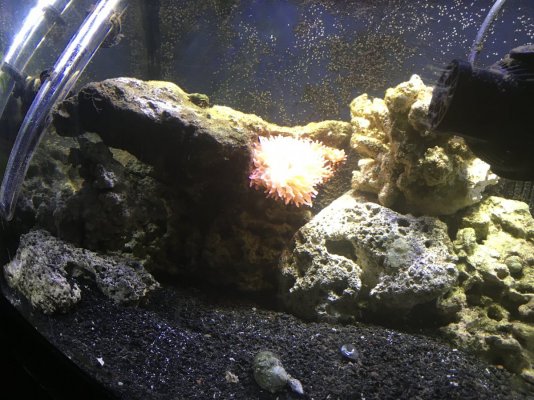 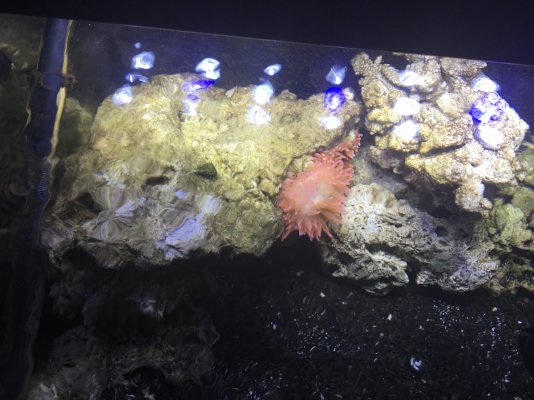 Cool! And welcome to reefing!
OP

Thank you.. sorry I got so long winded.
OP

warrasell said:
Cool! And welcome to reefing!
Click to expand...

Thank you, I’m really glad I found this site and I’m really looking forward to seeing what I can do with it my starter tank.

I don't know much about the biocubes, but you might be able to tuck that heater in one of the back compartments, might need to rearrange things, to make it fit. The heater did look long, so it might be too big for the back, but you should be about to find a different heater that will fit back there if you find the one you have already didn't fit.

I think this is one of the appeals with the all in one tanks, being able to hide extra equipment.

Also, most rock without corals can be out off the water for a while, keep most, if they dry out, bacteria will die. But to glue and replace should only be a minute or two anyhow. The anemones can be coaxed of the rocks with a home made 'anenome cannon'. I haven't needed to use it, but I hear good things about it.

Well we had quite a day today. My husband and I headed out to get something to lower the ammonia level in the tank. After driving the 1 1/2 hours the dang place is closed for the weekend. So we stopped off at another place we hear good reviews about. That place stopped dealing with saltwater. The owner directed us to a place 30 minutes away. It turns out the owner is a marine biologist. Wow, was that guy a wealth of knowledge. That heavens I was thinking and took pictures of the tank (including the back where the media goes) and the test numbers. The only thing I forgot was a notebook.

I have to say I felt like I was in bio/chem class all over again.

He took a look at the numbers and explained in detail what was happening and why. Then he checked out my setup and the first thing he said was to get rid of the gravel. I guess the type my friend used leaches out toxins. So my plan of getting rid of it was a better idea then I thought. Then when he seen the media bay he came up with the cheapest, easiest and long term fix. Instead of buying the media baskets, he sketched out the new modifications. Where the water intake is he sketched out how we can create a slow filtering trickle system that uses a single, triple media filter. Thank heavens my husband has a steel trap memory because he’ll be starting the build on it this week. So now I have the rest of the media holding area to hide the heater and the skimmer.

He also instructed me on how to do the complete breakdown and reset of the tank with the sand and the aquascape I’m going to start creating. Instead of using the reef rock that I have in the tank I’m going to be using the ones from the 165 gallon tank I’ll be setting up next year. This way I can take my time and let the new aquascape build up the good bacteria needed.

Pepe was so amazing on how freely he shared his knowledge, especially since he knew that we would only be buying a small bottle of detoxifier for the ammonia and nitrite.

So here’s our attack plan. I’ll be starting it on Tuesday.

1. Transfer the reef rock and critters to the temporary container.
2. Remove the gravel
3. Scrape off the buildup on the back of the tank
4. Clean the tank with vinegar, rinse and dry.
5. Remove all media and skimmer
6. Add in the new live Fiji reef sand
7. Replace the original rock and water and start cycling.
8. Each week do a 25% water change until its balanced back out.
9. As I’m cycling the tank, I’ll be creating the aquascape and stabilizing that in a separate container for about 3 months.

I already picked up the 60 lbs of Fiji Pink CaribSea Reef Sand and the detoxifier. On Tuesday the Bnzaq Fish Tank Aquarium Heater - Adjustable Temperature Submersible Thermostat will be arriving. Along with the tank scraper. Then the fun begins. Now I just need to get a good chisel, some super glue, epoxy and mortar so I can let my creative juices start flowing. I can’t wait to get started!!!

Mhamilton0911 said:
Nice! Sounds like you found a solid LFS (local fish store, even if it's not very local,lol) Ones that spend time educating even when they only make a few dollar sale are usually the good ones. Just make sure you switch around step 4 and 5 if you're trying to save any bacteria. And keep media wet if you're trying to save it.
Click to expand...

Nice point. Switching 4 & 5 around will definitely make cleaning it a bit easier too. Lol

Hello New to Reefing; was given an established tank that’s a mess
2 3

J
What is this?

Nov 30, 2021
Subsea
S
J
I have a 32 gallon Biocube. Today the fish and coral arrived and the Biocube started screeching what could be the cause