Ok, so after a 10 year break I've gone ahead and pulled the trigger on a Cade Reef 1200 S2. My old tank was a mixed reef which I lost in a flood/sewage incident. I had so much time and money invested in it that it pretty much took the wind out of my sail when it crashed and I lost everything. It was a typical rock pile reef, but I was young and proud of it. Here's a picture taken just a few weeks prior to the flood... taken April 11 2010 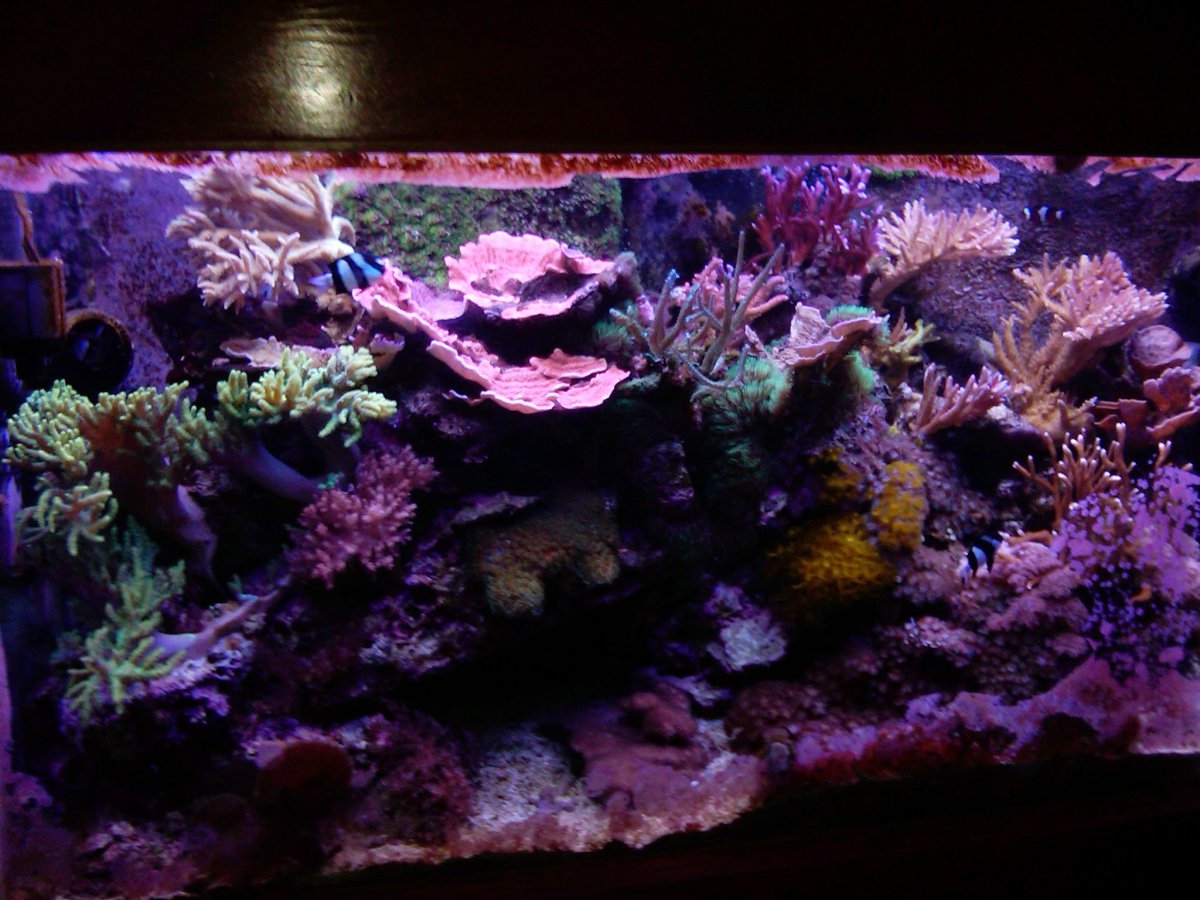 A bit of a mess, so on this new build I'm going with a good negitive space aquascape to keep it open so my wife and I can actually watch the life from all points.

So here we are, on to new and better things. 12 years later. My wife picked up a small aquatop 5 gallon for a betta a friend of hers was re-homing. We started running around so she could make the perfect habit for this betta and while that was happening I couldn't keep away from all the saltwater tanks in the stores we were running in to. I said something about how I missed my reef and she agreed. So I started researching the redsea reefer and AIO systems. I originally was going to go with the 170 and started putting an equipment list together. While every once in a while checking FB to see if anything caught my eye. We stopped at the LFS to start putting everything in place. The next day this Cade pops up in notifications FB marketplace about 20 miles from home. The tank was set up in his home and full of RO water just to leak test, he decided it was to big and put it up for sale. Needless to say I jumped all over it considering he was asking less than half of what he paid brand new just a few months prior. I grabbed 2 friends and we ran and picked it up. 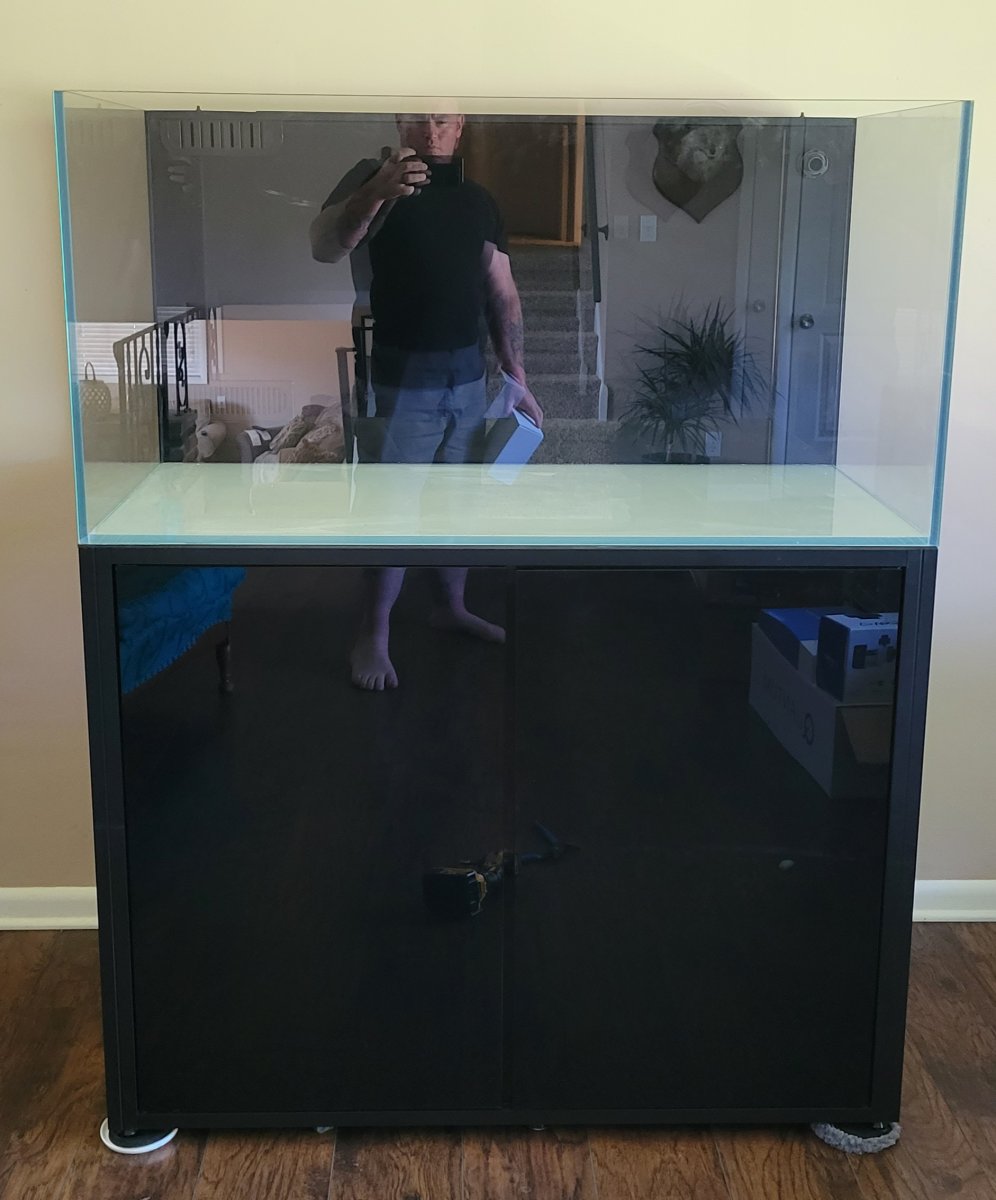 Here I am now, going from the 50 or so gallon system to almost trippling that with this one. It sat for the last few weeks while I rounded up everything I needed to get it going.

I spent yesterday building a controll board to mount the apex on the right side of the sump and get it all wired up and keeping the wires out if eyesight. The old tank was an absolute mess of wiring and I didn't want that here. I decided to go ahead and grab a Fire tab to use as the display for the apex so I just used velcro to slap that in there for easy access and programming. So here is a shot of that all done, I didn't think to grab any pictures while I was putting it all in place, I was just focused on getting it together so I could get water in it.. 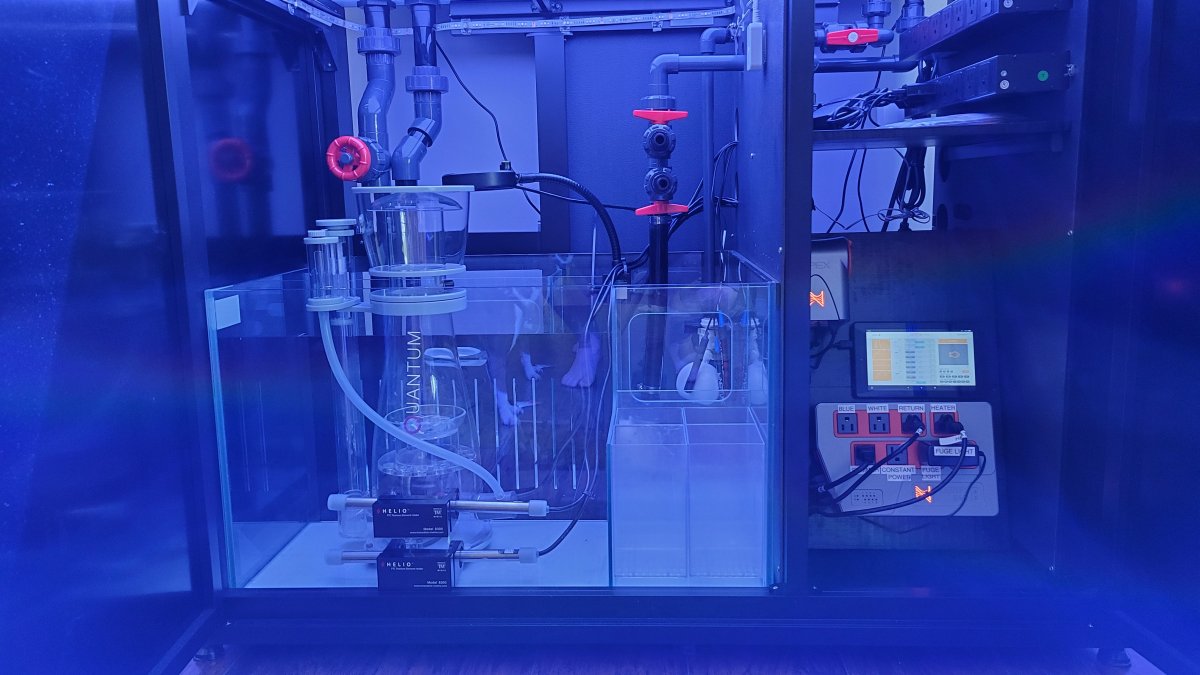 This morning, I played around with the programming and got the kessil's all running. After that I hooked up the RO/DI system to the hose and I've got water going in. And it's slooooow... my God... I've got 50-60psi running from the well pump and a 75gpd system, it's like watching paint dry.

So, here's to a new beginning. Hope I didn't ramble on too much. 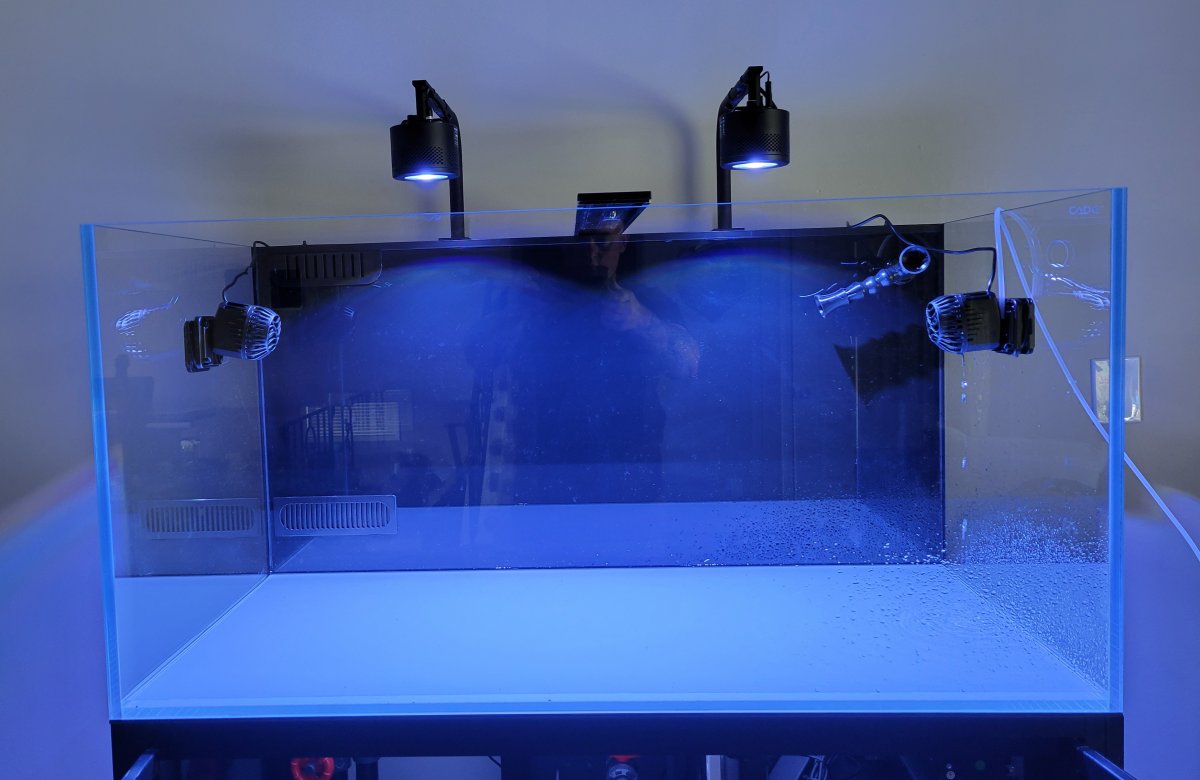 Thanks for stopping by, I'll update as it progresses!

All 1" pvc fittings from a local plumbing supply store. Except the 3 bulk heads those came from LFS.

The slip and threaded unions were used to connect to the pump, used 1/2 of each to make the connection from the threaded end of the pump to the slip end to glue the pvc.

The Oatey cement is made to connect gray sch80 pvc to white sch40, works great. 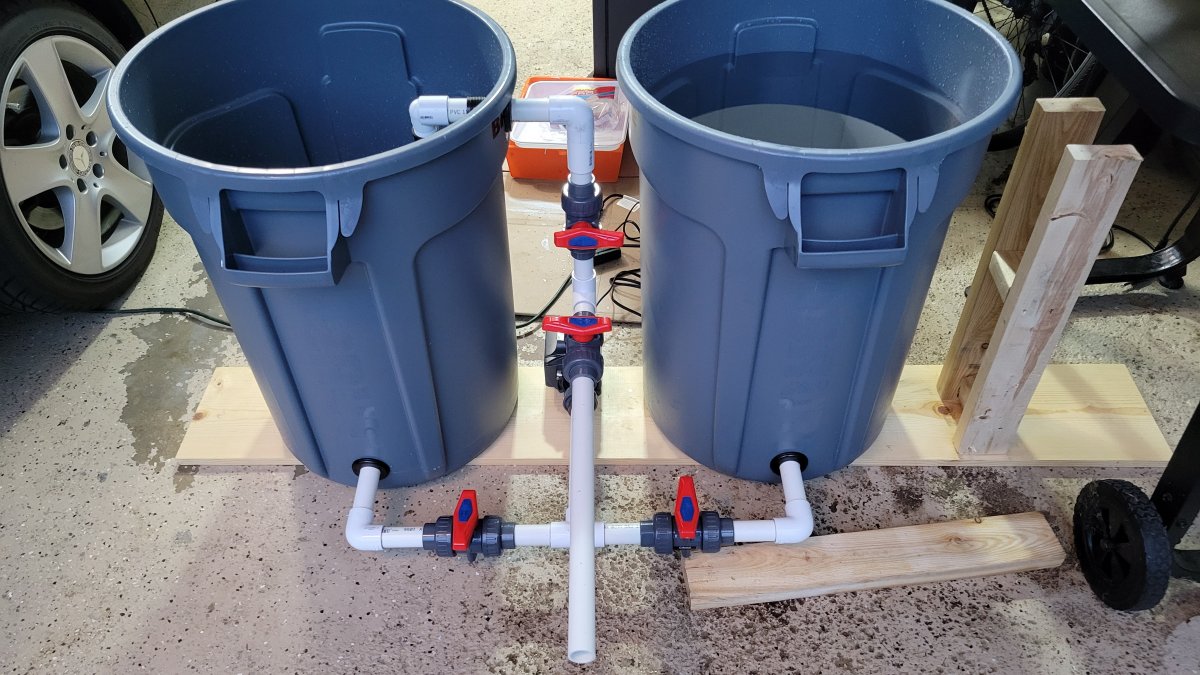 I've gotta figure out what kind of output connection I want to use still, so I left that a bit longer.

Also, the true union ball valves are perfect. They come right apart so this whole system is completely mobile and if one ever goes bad it's a quick change, just unscrew the union and replace it.
OP

Water is in. I tossed the salt in and let the pumps rip to get it mixing. Also dumped 80 pounds of Fiji pink live sand in. Debating on which route I wanted to go with rock. Pristine rock has a great deal at $1.60 a pound, I may grab a 50 or 75 pound box and 20 or so pounds of live rock to seed it. Just want to get the cycle started with the live sand so I tossed a cube of brine shrimp in to ghost feed. Waiting for my trident and dos to show then just need to grab another dos for auto water changes.... I've got plenty of time, and a bunch of food to get the spikes. 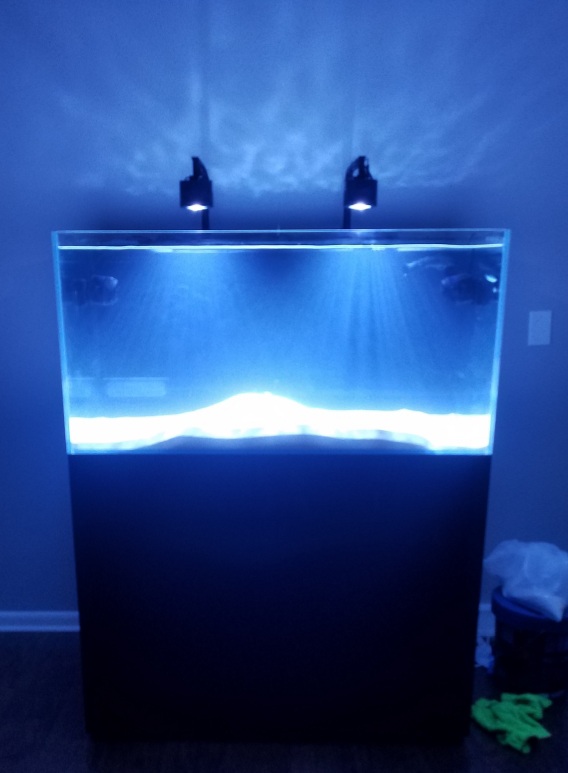 Well, I replaced the vectra m2 with a Neptune Cor15. With traveling for work the integration with the Apex just made more sense and the M2 was a bit over kill running at only 20-25%. Running the Cor at 40% and I'm getting pretty good turn over. Tossed a few pieces of LR in at about 20 pounds, with the live sand and rock cycle went fairly quick. I was going to use dry rock but I don't really want to deal with all the BS that comes with it. Tossed in 3 small green chromis to feed bacteria and season a bit more. I may grab a few more to keep them schooling but I really don't want to have to rip it all apart to get a bunch out in a few months...

On a side note, the PH monitor on the Apex is a giant pain in the a to get calibrated with the apex solution, I ordered different solution to try, hopefully that will work out better. Anyone else have a problem getting the probe to read correctly?

Small steps... BRS had a Neptune LSM and LED's open box for almost half off. So I snatched them up, modified the 4 led strip down to a 3, added some extra length to the plug and mounted them to a 3/4" x 1/8" aluminum bar (painted black) I was going for the stock look I guess. The kessil mounts and lights don't really leave you an option for mouting moon lights so this is my DIY solution. Worked out pretty well, keeps the wires hidden for the most part. 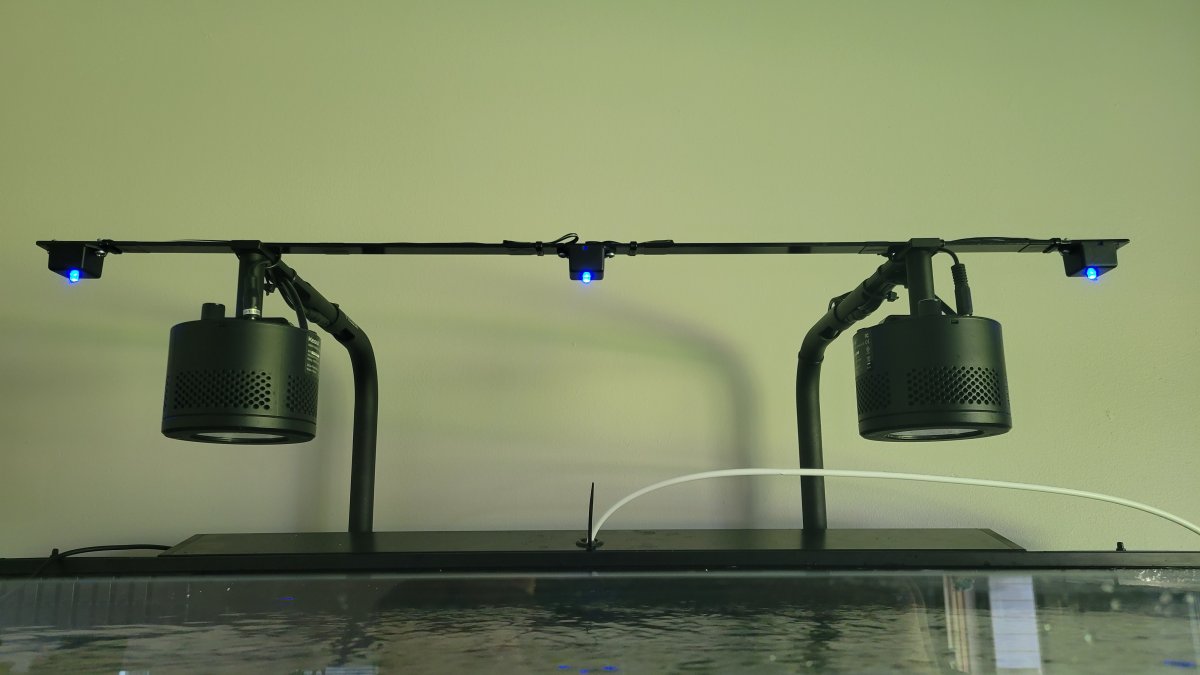 Pay no attention to the 1/4" tubing.... its filling up the ATO camber I really need to get all that tubing tied up and actually set up my mixing station in the basement. Waiting on my DOS units so I can plumb it all up at once.
OP

Update, couple frags, couple clowns and aqua ultraviolet 40 watt UV installed inline with the return. I'm debating on 1 more a360 or possibly going with 2 ap9x for lighting. Time will tell... 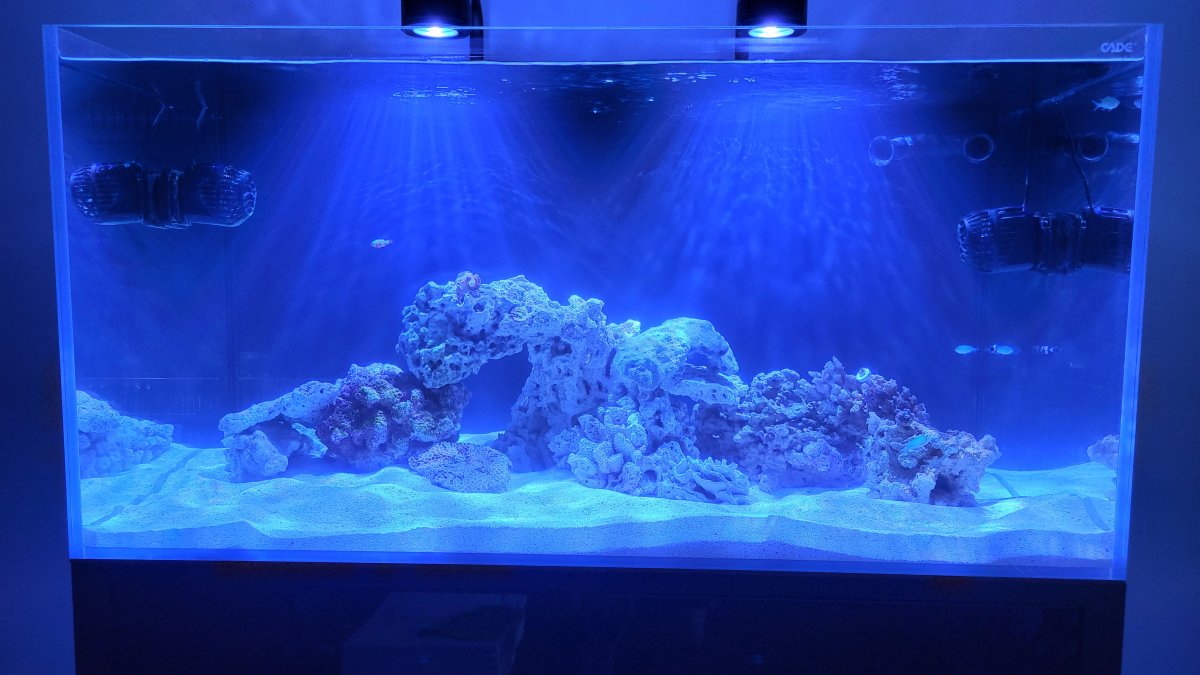 Can you post pics of your UV setup and how you have it plumbed please? I’m looking to plumb the exact same UV into my 1200. Thx!
Click to expand...

It's kind of roughed in, the 40w is like 36 inches long so I have it upright on the back left corner. I just used 2 zip ties to hold it vertical. It's easy access there for maintainace and removal if needed and also hidden. I ran a 1" hose from the return pump to the UV in and from the UV a hose back to the return on the tank.
OP

So I realized I am not a fan of the NYOS skimmer.... at all. I looked around and found a Reef Octopus regal 200-int on marketplace in like new condition for 150 bucks, snatched that up and installed it, tuned and working great in less than 24 hours. I couldn't get that quantum tuned. So much happier. 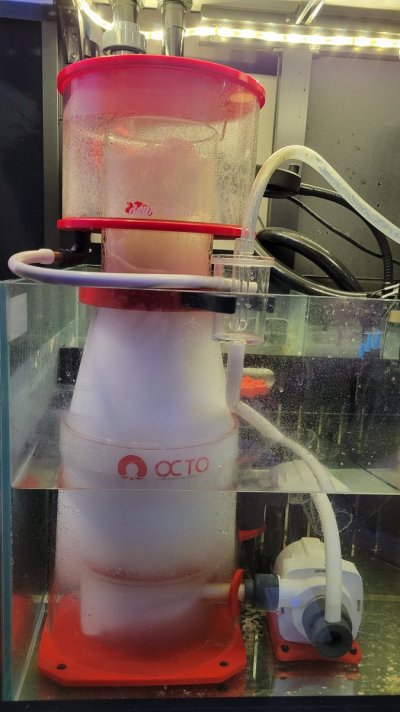 I spent the weekend doing some cable management. Moved the apex to the side and all the controls are there now. Fitting the apex 832 was a bit of a challenge but I found some flat plug extensions that fit perfectly so that the door closes flush. I did that so that I could free up the area where I had made the panel so that I could fit a Trident and DOS in there without adding another cabinet next to the stand. Just trying to keep it all in one and clean. I'll have to post some pictures later, I worked on it all night after work and finished up Sunday morning before the water change. Didn't think to grab any pictures.

Also, we added some fish, and CUC. 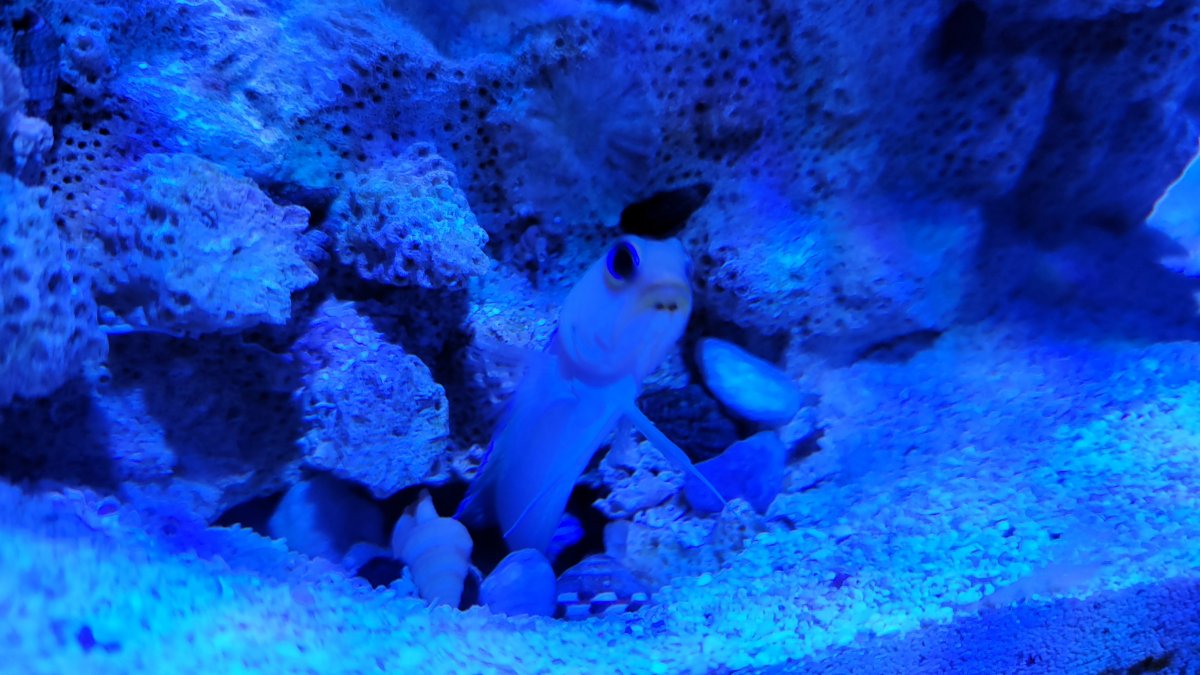 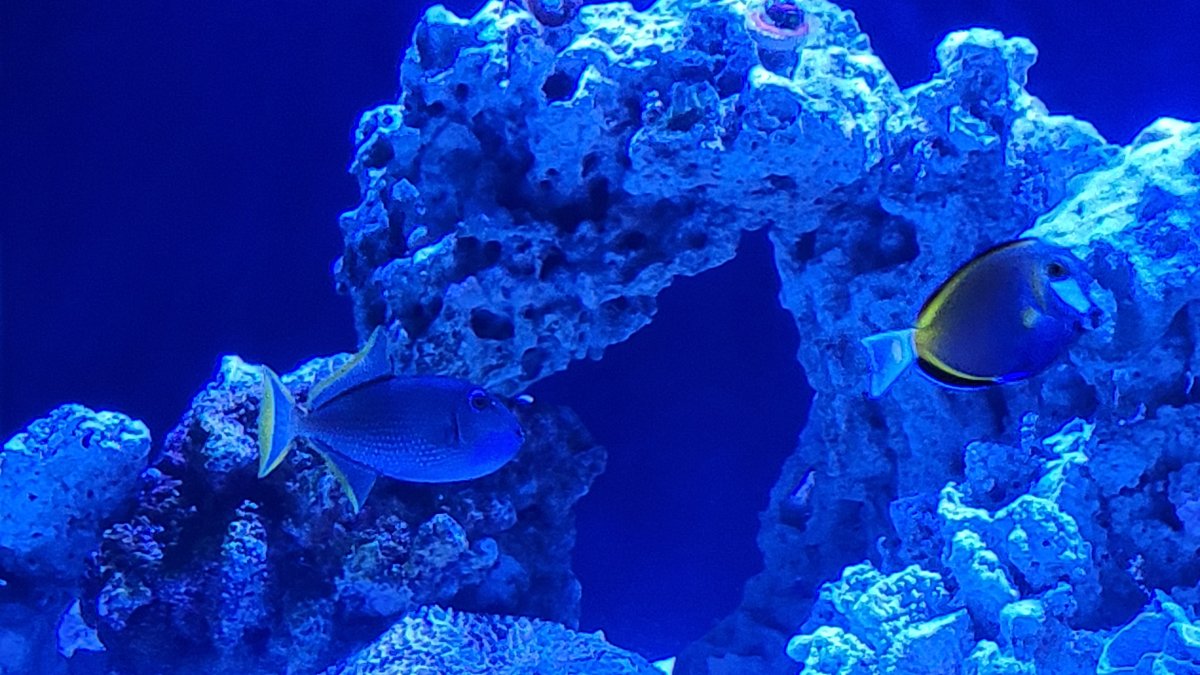 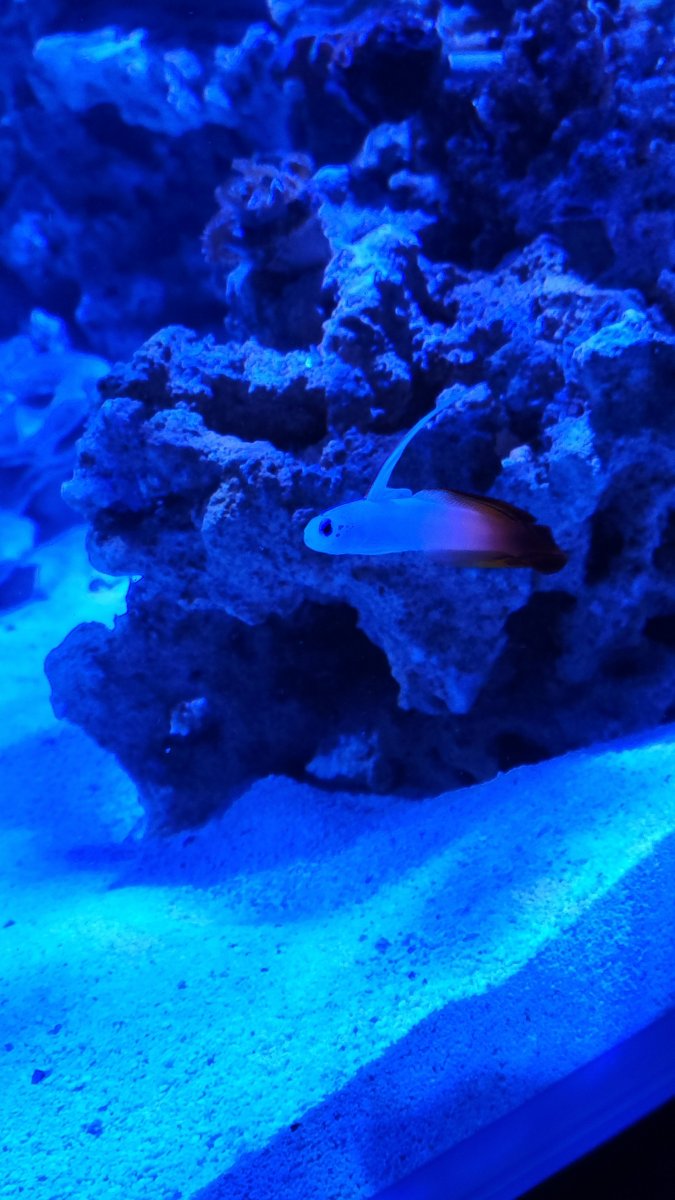