My clowns are attacking my new Lawnmower Blenny Please help

So my tank is fairly new, FInished cycling at the beg of April. I got 2 mated clownfish. A month later I got a Diamond Goby, then a couple weeks later a Striped Blenny and a Royal Gramma. The Gramma hid for a few days then I found her dead. My wife said she thought she didnt look good in the bag when Acclimating. I never saw my clowns attack anyone.

A week later I got a lawnmower Blenny. He swam right into the cave the 2 clowns live in. I used my turkey baster to blow water at him to move. He ended up moving in a cove very close by. He was hiding a lot but would come out and eat algae a bit. The clowns were always poking around where he was. The 2nd day he hid all day and I started thinking something was wrong. The 3rd day I woke up and they were both chase him all morning and even squeezing into nooks he could only fit into to bite him.

So I decided to restructure the back part of the cave the clowns live in.(still keeping intact the main cave the clowns live in) I got the blenny to move to the otherside of the tank where I put more of the rocks from the clown cave side. He hide in a spot they couldn't really reach him and if he tried to come out they would dart toward him.

So then I decided to use egg crates to divide the tank. The Lm blenny is much happier he comes out and perches and eats algae. I was thinking of keeping like this for a few days and then removing it. Thoughts? I dont really want to keep these crates forever and I also dont want the lm blenny to be killed. The diamond goby and the striped blenny have zero issues with the clowns. 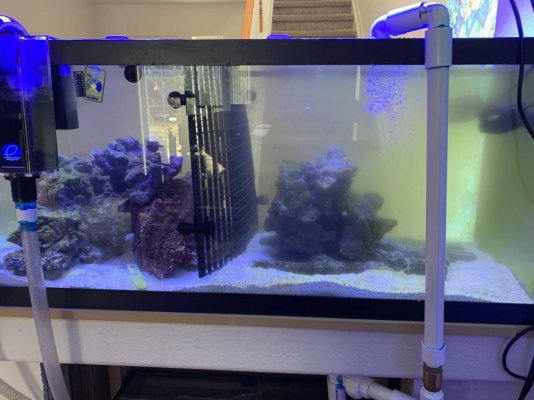 When you used the turkey baster you signaled to the clowns that he was an invader. They knew you are the ultimate boss of the tank so they took the cue from you and are trying to run the invader out. (Lots of folks will think that is crazy but I still wrote it, idk. )

You probably need to reset the tank. It is plenty big for the few fish you have but moving rocks and making new habitats will change the focus of the fish from defending their current territory to (everyone) finding a new place to call home. Hopefully a reset will be enough to get them all living together, but the pair and the lawnmower may be mortal enemies at this point and they may never get along? Reset the rock structure and if they learn to play well then you are good to go. If not then either the clowns or the blenny need a new home or else some fish will die.

New Midas blenny at the bottom of tank

What is my clown fish doing?