Rating - 0%
0   0   0
Hello all, after dreaming of this tank for nearly a decade I've finally pulled the trigger and set up the tank I always wanted. I'll be recording the progress here. The tank has been up for a couple months now, so the first few posts will be about the progress so far. I didn't plan on making a build thread, so I don't have a ton of photos from the very early days.

My history:
Summer of 2013, I got obsessed with the idea of keeping reef tank and bought an IM Nuvo 38 AIO tank with my internship money. It was a mixed reef with a couple clowns, a Midas blenny, and a handful of other fish that I had varying success with but ultimately it was a healthy tank with a happy anemone and a variety of corals in it. After a few years I let life distract me and the tank suffered for it, I finally took it down after it crashed after about 4 years. I lost a clownfish while I wasn't home and most everything else in the tank died as a result. A couple years ago I got the itch to set it back up so I re-estabilshed the Nuvo 38 with live sand and the reefsaver rock. It went pretty well once I started properly maintaining it. The success there got me thinkin bigger and after I bought my own home I finally saved up enough to buy my dream tank!

On Aug 21, 2022 I got the tank set up, plumbed in and filled. I started the cycle off with Fritz Turbo-Start and a Fritz Ammonia Supplement. I left the skimmer/reactor off for the cycle and didn't install the ReefMat until the cycle finished off. I also left the lights off for the whole cycle and initial setup. I used some filter floss where the filter socks usually go to clean up the fine sediment from the sand and ended up adding some flocculent to try to clean it up some more. I also moved over ~1/2 of the MarinePure Bioballs from the existing tank at the start of the cycle to try to seed the tank with pods. 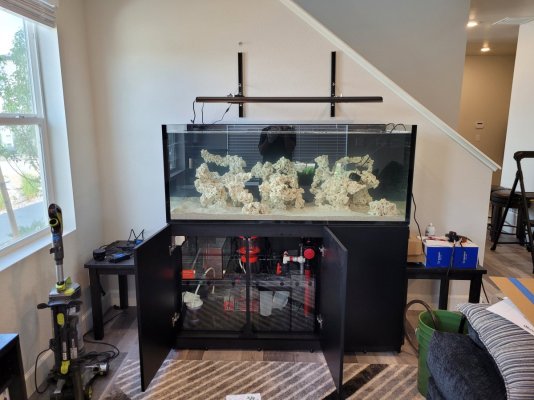 Rating - 0%
0   0   0
The cycle itself took about 2 weeks to consume the ammonia and Nitrite, I wanted a nice healthy starting biome so I used the full bottle of Ammonia which raised the concentration in the tank to ~4ppm. This was the high end of the recommended range so I figured it would delay things a bit.

I tried to big-brain the cycle and setup, so I was monitoring Alk during the whole thing and started dosing to maintain it. I'd read that the rapidly developing bacteria could strip the carbon out of the carbonate so I thought I'd help it along. The tank was absolutely gobbling up the Alk, and I was adding ~320mL of BRS Soda Ash a day to try to keep it around 8-9 dKh.

As some of you have probably guessed, it was actually just precipitating out. I noticed one night that the sand bed was hardening so I stopped dosing all together, broke up the sand and decided to just let it ride out.

At the end of the cycle, I set up the ReefMat and moved over my two Oscellaris Clowns, Yin and Yang, to get a more permanent source of Ammonia going for the new tank. After a week, I set up the coral cover lights to slowly come on each day to prep for the tank transfer. I also set up the controller at some point during this time too.

Rating - 0%
0   0   0
Around 9/16, I decided the tank was ready and decided to transfer everything over from the Nuvo 38. This included a Flame Blenny (Benny), a Firefish (Candle), a CuC consisting of 2x Emeralds, some snails and whatever small starfish I could find. I also moved over my corals, a Hammer Coral, Zoa colony, and a Lepastrea colony and the remaining MarinePure, but I decided not to include any of the existing rock/side aside from the Zoa Colony. So it was time to turn on the lights over the next two weeks and cross my fingers that the uglies wouldn't be too bad. I also started dosing some Cal/Alk again, but decided to try to hold at ~7dKh to avoid the precipitation issues. I also turned on the skimmer, with the idea being to let the tank stabilize around the actual filtration I had planned for the tank.

I was excited to get my stocking list going, so over the next few weeks I added an Orchid Dottyback, Midas Blenny, Watchman Goby, and two cleaner shrimp.

The Midas Blenny (King Midas) was a bit of a risk since I already had the Flame Blenny in the tank. I was thinking the tank was new enough that there might not be territorial disputes and that the two super peaceful fish might not be bothered by each other. I was wrong, and actually the Midas blenny was harassing the existing Flame blenny for the best cave in the center of the tank. Each island of the aquascape is a single large piece, so I didn't have a way to get either of them out of the tank safely. Luckily, after a week the Midas blenny found a different cave and now the two fish seem to get along. I'm still a bit worried about the Flame Blenny because his lower jaw doesn't look quite right, but they are both eating so perhaps they just need time. They seem to be friends now and I see them swimming together regularly, but that first week was pretty stressful.

The Watchman Goby is also a bit controversial, I know this tank is very young but I noticed a fair amount of life growing on the sand bed in the form of diatoms and cyano? (more on that later). So I was thinking he would be safe enough in the tank. I was very scared of the sand bed firming up again, so I wanted something to help turn in over and since I was planning on getting one anyways, the LFS managed to convince me to get him sooner than later.

Rating - 0%
0   0   0
That brings us to current day. Starting sterile but bringing in media from an existing tank, I can see small patches of each of the different algae types in the tank, but until recently nothing really took over. I just added my school of 6x Lyretail Anthias (1x Male, 5x Female) and they seem to be taking to the tank decently well. Two are completely fearless and hardly ever leave the water column, the male switches between hiding and swimming in the open while the remaining females are still lurking the caves. They all seemed to eat well and I've bumped up the auto-feeders to give them food during the day in addition to the frozen Mysis/spirulina brine I feed the tank each night.

Sadly I've hit the ugly phase in full force however, the rock is overwhelmed by this brown substance that I think is Calothrix based on the Reef Cleaners ID guide. It is mildly stringy, with bubbles trapped within and can be mostly blown off the rocks with a turkey baster. Once off the rocks it falls apart and gets removed pretty easily by the reefmat, but the corals don't seem very pleased with it and nothing seems to enjoy eating it except for maybe the Astrea snails. I'll be making a separate post for the path forward on that issue though.

Things are moving along though, I've seen a pink, purple and green patches of coralline algae growing among the variety of ugly pests. It also looks like the Zoa rock brought along the amphipods and bristleworms which look to be breeding again in the new tank.

Going forward, I think I'll try to keep the CuC hermit free and expand it slowly based on what I see in the tank. Once I see things stabilize out a bit, I'll keep adding things till I get to where I want to be. Next on the list is the tang gang, but I'd like to have some decent food growing in the tank for them first and I just added a ton of fish, so I'll prolly wait a month or two.

Future Stocking:
Fish:
1x Tomini Tang
1x Zebrasoma Tang (thinking Purple or Yellow)
1x Acanthuru Tang (Something hardier like a Convict or Lavender, though I would love an Achilles I just don't think its wise)
1x Six-Line Wrasse
1x Spotted Mandarin (after the tank matures)
1x Filefish or Copperband (not convinced here yet, might only happen if I get Aptasia)

Softies
Mushroom rock of some sort

So far its been great, though since its been on from the start its hard to compare it to alternatives like filter socks. I'm just about at the end of the first roll, though I've definitely done some things to shorten its lifespan like letting the overflow clean out any algae I blow of the rocks or the time I kicked up a ton of silt because I thought I buried the goby. The motor is louder than I would have expected, but it only runs for a few seconds at a time every 30m or so. It auto-tracks consumption and gives you a warning when you're low which is also a nice touch, for me it was a 5day warning. It dropped in easy to the red sea sump but honestly doesn't look like it'd be too hard to put into any sump it fits into.