My First Marine Tank and an Unplanned “Upgrade”

Two months ago I threw together my first saltwater tank. As I’ve alluded to in the past, but may have gone mostly unnoticed, this was a somewhat spontaneous deviation from my plans to set up a freshwater shrimp tank. The tank is a 14 gallon aqueon cube. Through Petco’s website I paid about thirty dollars each for the two I purchased. In store they’re still selling them for $85. I read more than a couple reviews, before the purchase, that suggested the seals on these tanks was sub par, and upon inspection of the tanks in person, I knew these complaints were founded. I figured, hey, I’ll just buy some silicone, slap that in the corners, and I’ll bet that will hold just fine. I bought the silicone, but being rather impatient (and you know what a virtue patience is) I didn’t reinforce the corners, and soon the tank was cycling. Cheap, low tech, the “Petco Special”, call it what you will, these are my beginnings. 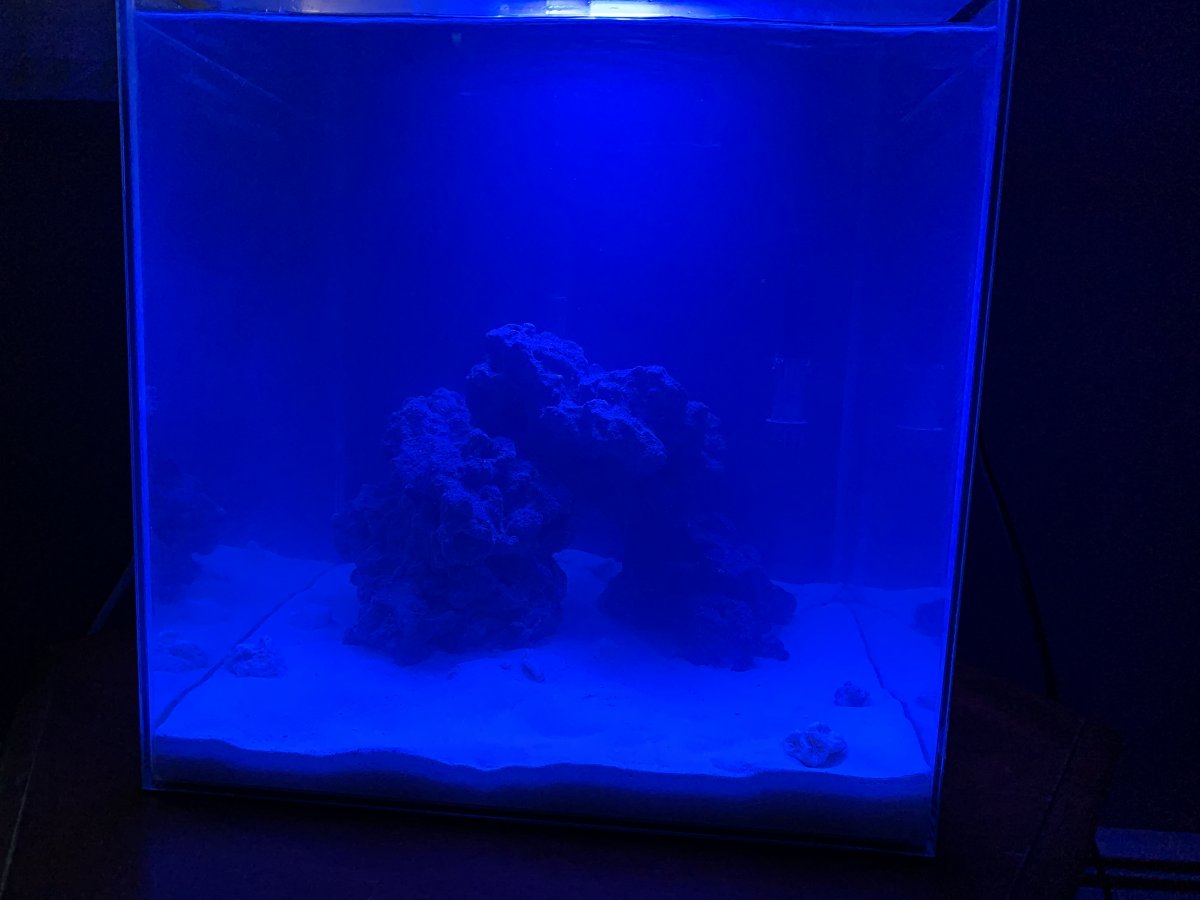 A very simple setup. I used Carribsea live oolite, live rock from Petco’s tanks that is apparently maricultured, and a bottle of Biospira for good measure. One of the rocks I bought had an emerald crab in it that the Petco employee could not get out. I added an Aquaclear 30 hob, a Fluval cp1 circulation pump, and an Aqueon 50w heater. At this point the light was just a clip on lamp with a smart bulb in it to take a picture. I think the blue was masking the cloudiness a bit in the pictures, because I don’t actually have a white light picture until about five days later when I decided to add a couple more rocks(and two more accidental emerald crabs). 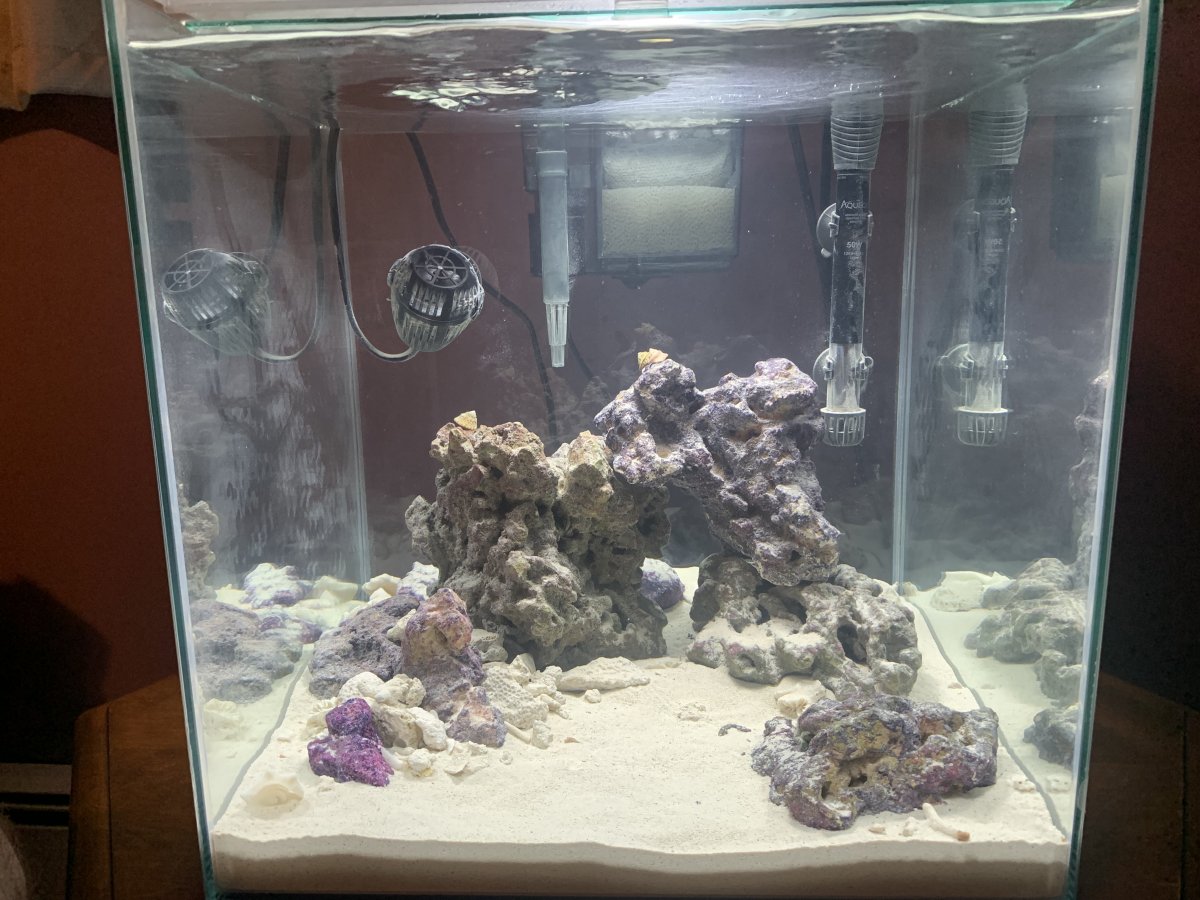 I fed the crab a couple pellets each day, and after nine more days of testing and monitoring, I was confident this tank was cycled. By this time I had bought and recieved an AI prime 16 hd. I bought three corals from a LFS on day twelve. 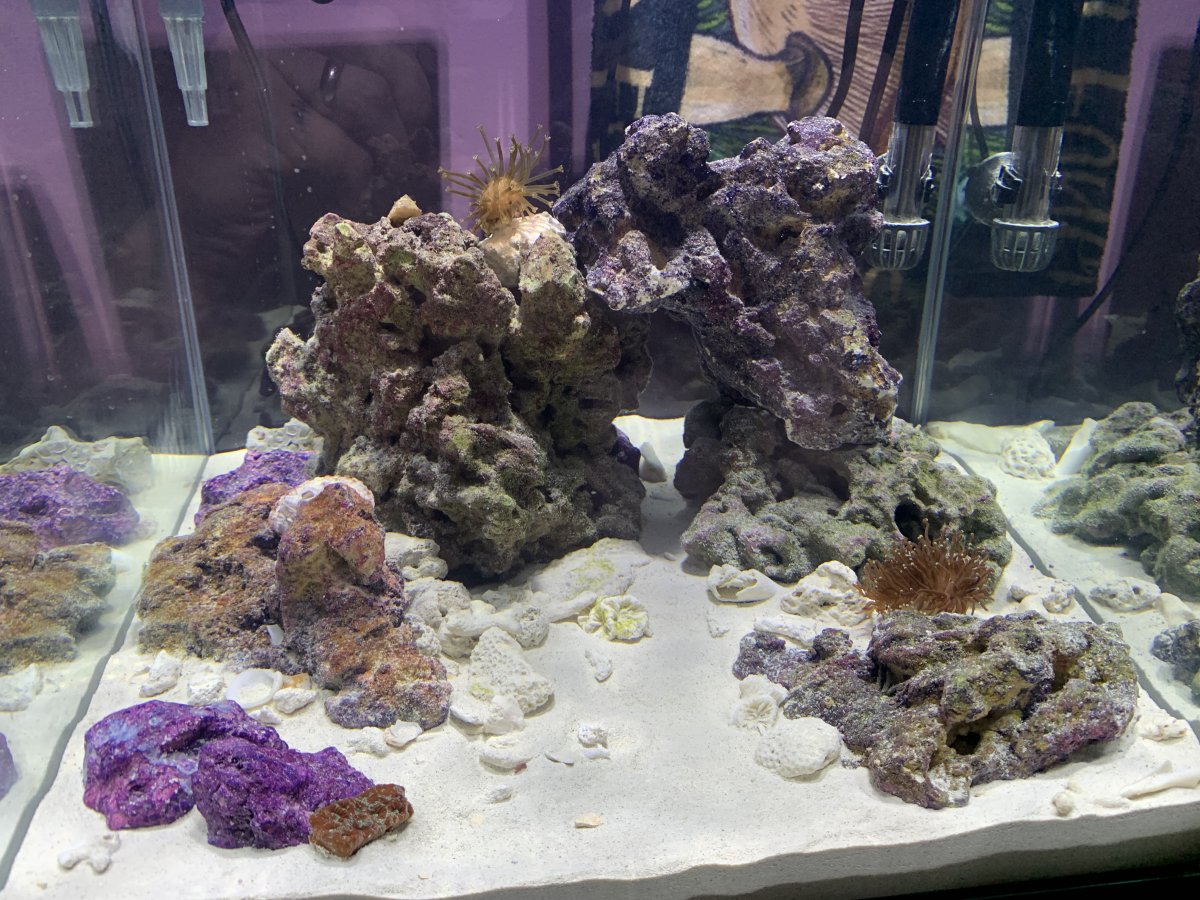 On day 16 I added a pair of clowns, an impulse buy(kinda) on a snail/supply run to again, Petco. I know this is not a place you would optimally buy fish, but it’s actually the closest and most convenient place for me, so, sorry. 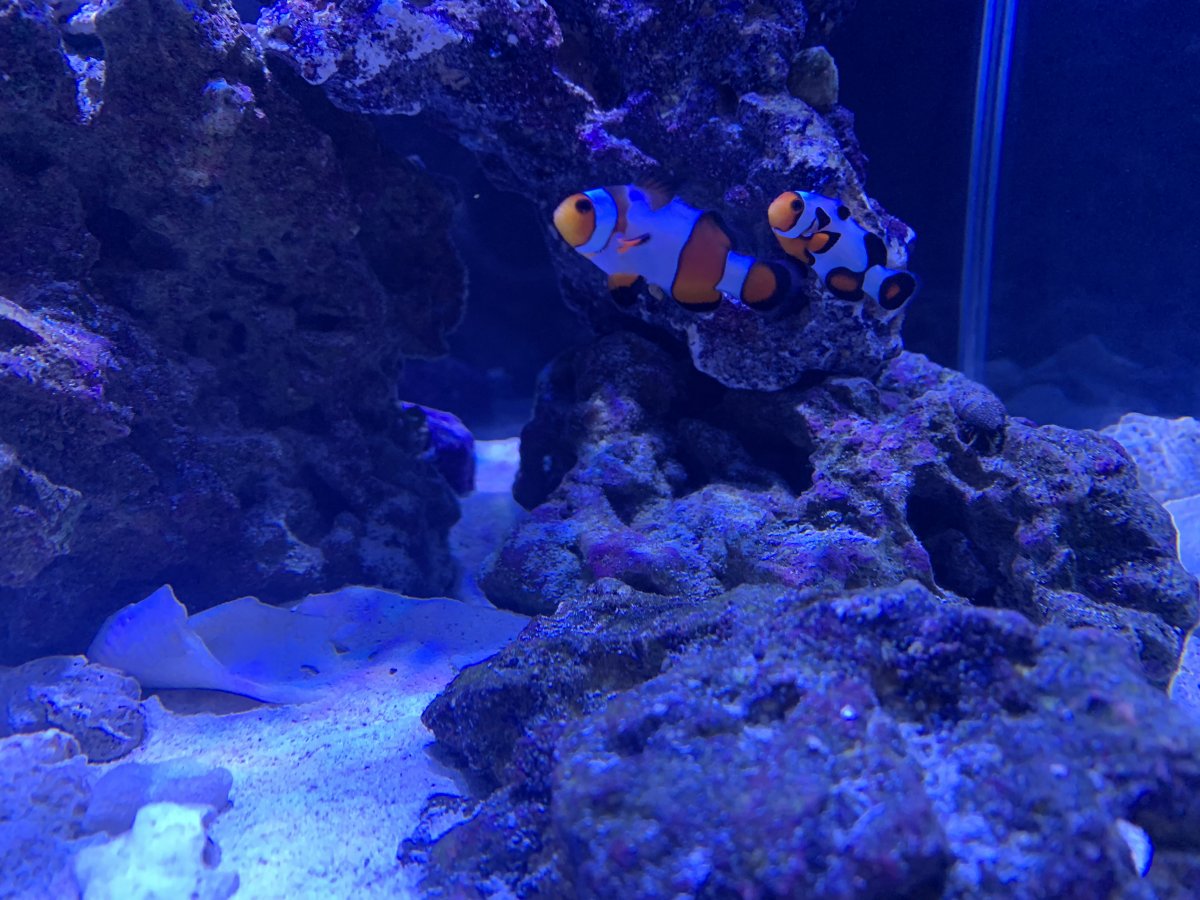 They’ve always seemed healthy and voracious. They may have been bonded already when I bought them, if they weren’t they certainly did quickly. They’ve always slept together and behave as you would expect a male/female bonded pair to behave.

Jump to today. Or jump to two days ago I guess. I’ve added another circulation pump, a Fluval cp2 this time, a few more corals, and some snails and hermits, and barring a few hiccups along the way, things have been going relatively smoothly. That is, until that whole silicone thing caught up to me sooner than expected. While thankfully it’s not leaking yet, two of the seals in the top corners are showing ominous signs of imminent doom. Funds are a bit tight right now, so instead of upgrading to a 120-150 as a I’m still planning in the hopefully-not too distant future, I went out and picked up this tank. Seemed like a bargain. 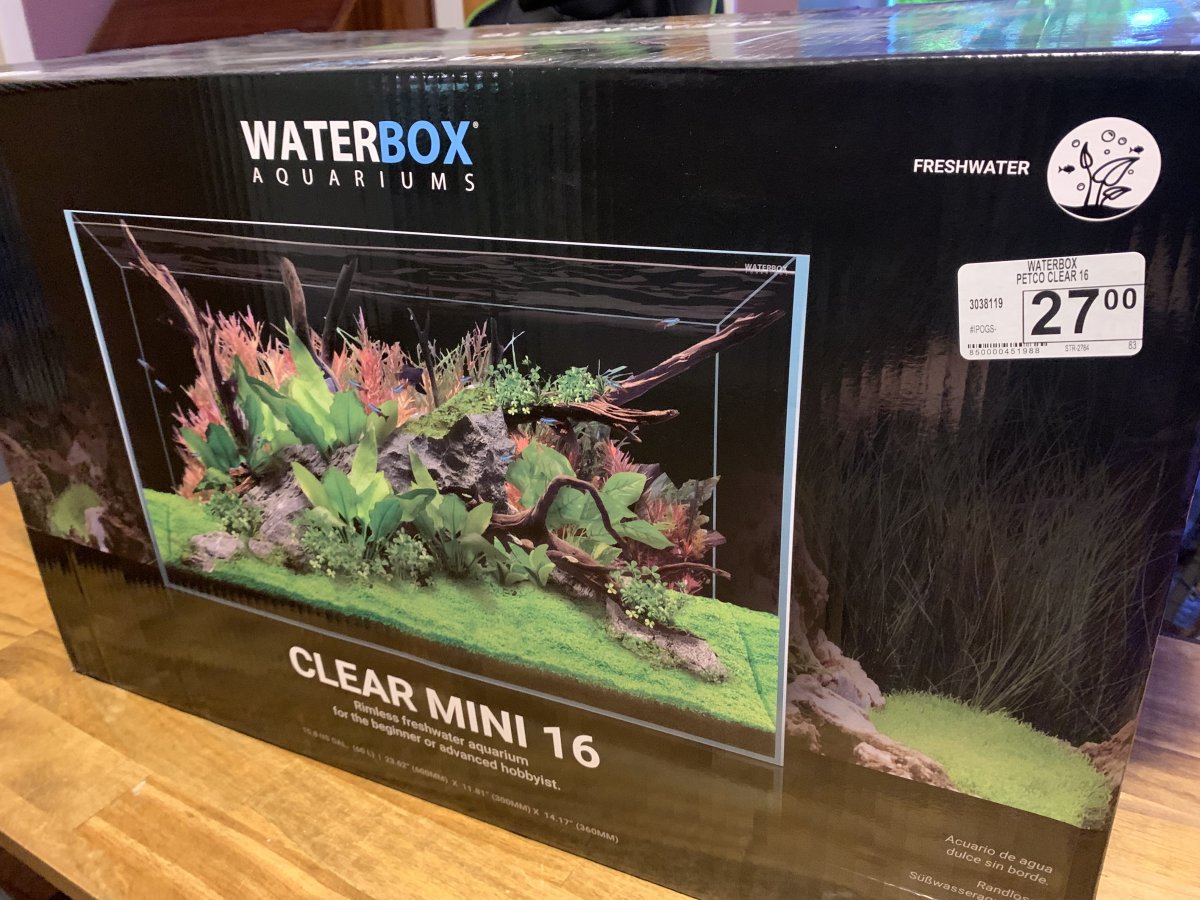 I bought another bag of live sand, Fiji Pink this time, it’s much more coarse than the oolite and I haven’t really decided whether I want to use the new stuff or keep the rinse and reuse the old stuff. The plan is to do a smooth transfer, but I need to figure out a stand. I have a thrown together type of a stand that I was going to use, so I didn’t buy one when I got the tank, but I realized it wouldn’t work. More to come on the transfer when I get around to getting a stand together. Here’s a picture from today, in all it’s ugly splendor. 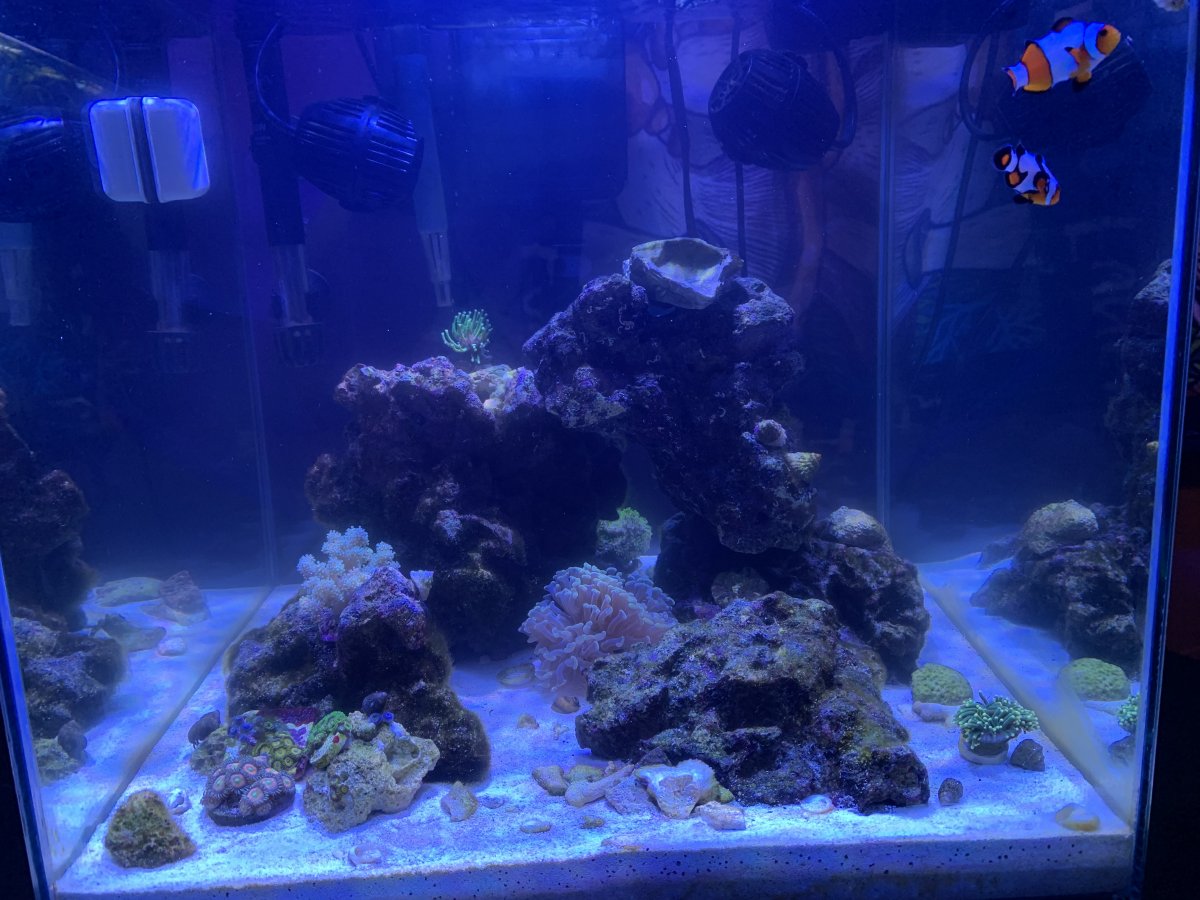 I’ve been having trouble keeping the torch and the toadstool consistently happy, seems to be a lighting thing. I’ve been increasing the lighting, thinking that is my problem, but went a little too high, too quickly on the whites, and had quite the film algae bloom when I got home today. I don’t think the overfeeding has helped either.

So that’s where I’m at right now, thanks for reading, I hope you tune back in for future updates!
Last edited: Oct 2, 2021

It’s looking pretty good so far. That seems like a heck of bargain on the waterbox (though I don’t know the freshwater pricing of their tanks). Good luck with the transfer of everything.

Also, you’re not going to get any hate from me on Petco fish (I shop there too - just quarantine first) While they can be hit or miss, looks like those to are good to go

Nice score on the tank, you saved about $123. Off to a great 2nd start, good-looking clowns too.

Looks great! I am with you on the Aqueon cube though, mine looks okay at the moment but after reading some horror stories the past few days I am also considering an early tank switch before my tank becomes established. That waterbox is a crazy good deal, can't wait to see it in action.

I buy my fish from PetCo due to being so close and cheaper than LFS. Only bad buy was a red fire shrimp I ordered but they gave me a refund as they had just dumped it into the display tank, called me, and I picked it up and it died during acclimation. They said their new guy had not acclimated it and dumped it in so it probably died because it basically it went through 3 different salinity levels in 2 hours.

I just discovered unplanned clown fry in my frag tank.