I'm just getting into the reefing hobby and I'm super excited about it. I'm starting with a 45 L (11.9 G) tank thats 50cm*30cm*30cm. It's going to have a small AIO style false back on one of the sides made from acrylic which will house a heater, filtration, return pump, and probably a mini refugium down the line. In this post I'll just show the tank as is, the rock I have, and list my equipment and future plans.

I just assembled the tank tonight with glass bought from a local glass shop using clear 100% silicone. It's curing and tomorrow I'll clean up the silicone with a razor. Here are pictures of the tank and the ~10.5 lbs of Marco rock that I have for the tank: 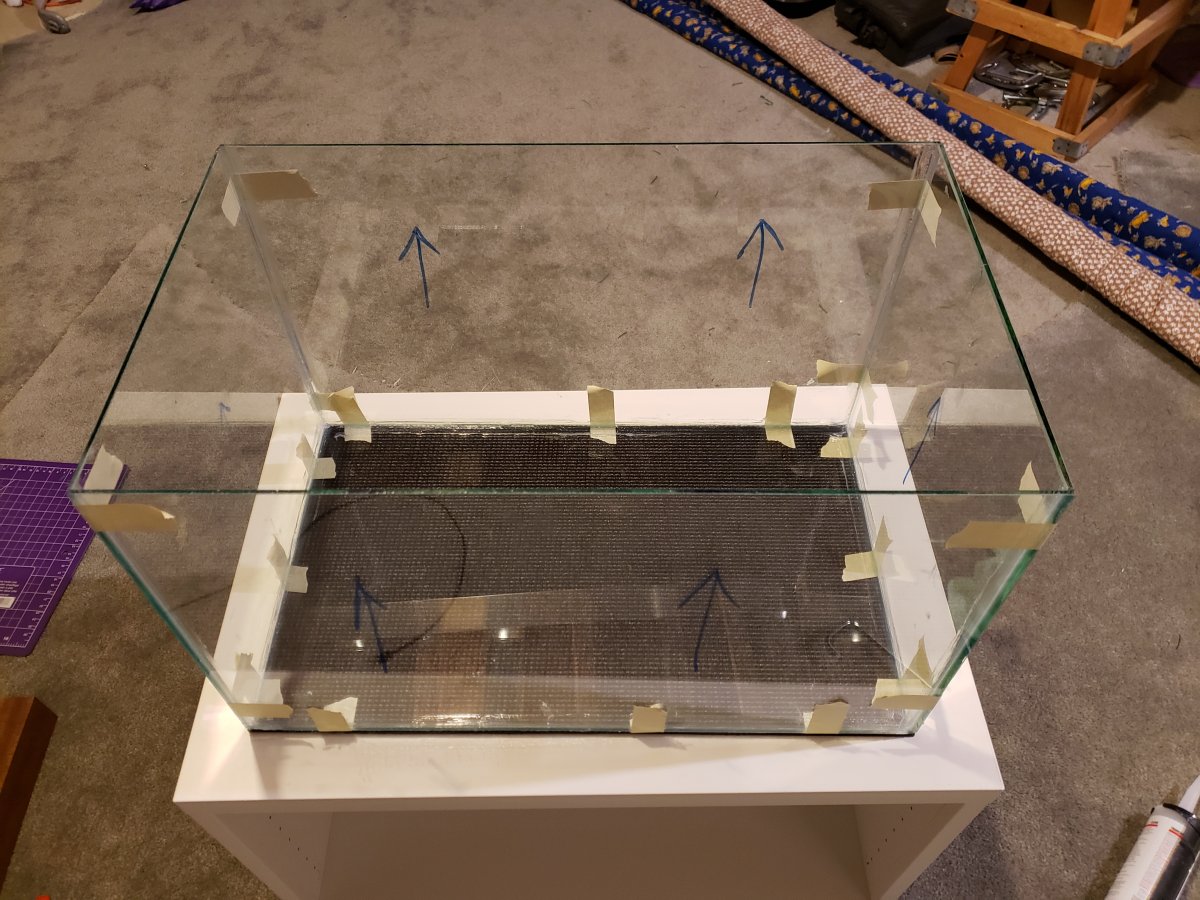 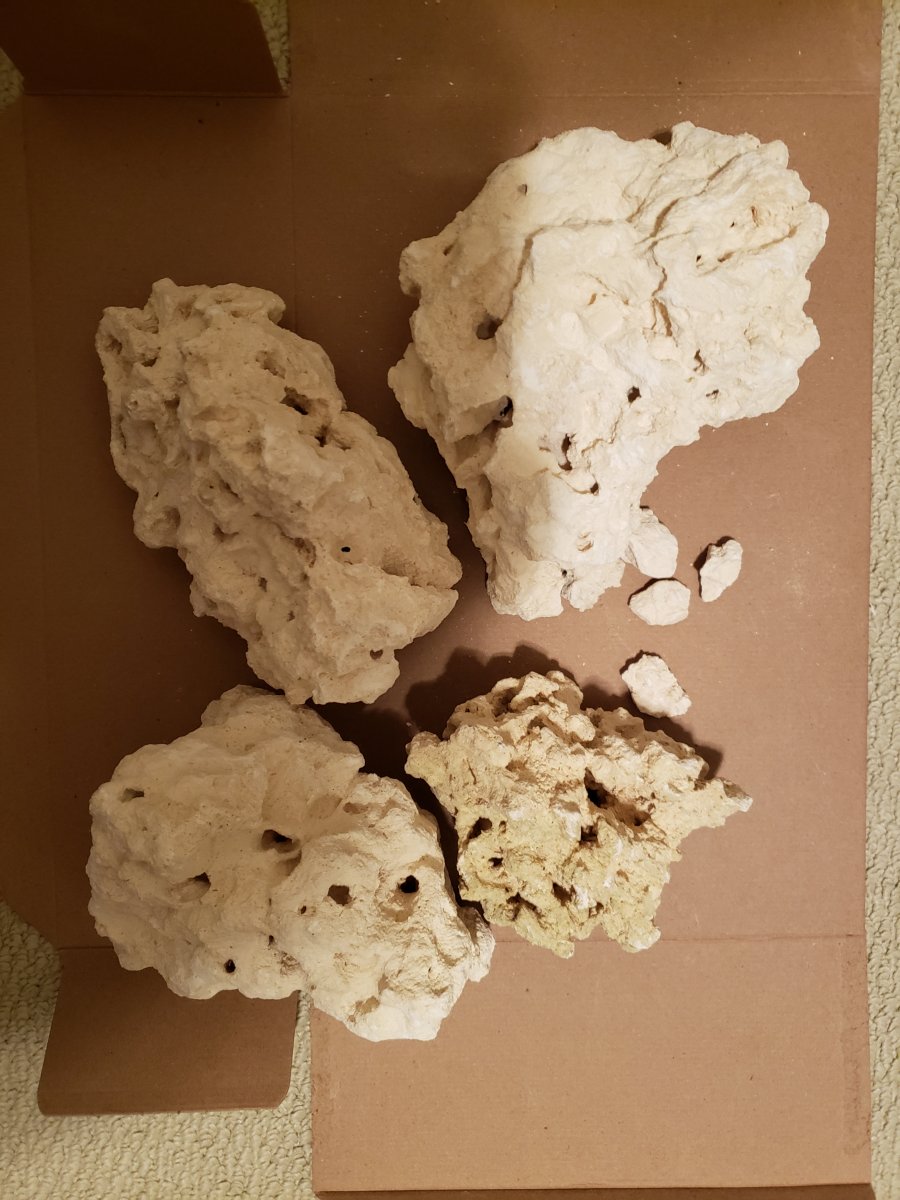 Return pump: Vivosun 210 gph submersible pump (Amazon). The pump supposedly adjusted down to ~80 gph, but im hoping to have it slightly over powered at first to avoid using powerheads for now.

Filtration: Going to try doing a sand pre-filter in a media bag in hopes of creating mechanical filtration that is more sustainable than using filter floss. I plan on thoroughly cleaning this sand every water change by shaking it out in the old tank water. Maybe I'll put pumice or siporax under the sand. I'm just doing a DIY media basket with black egg crate and zip ties once the false back is installed.

Nutrient export: A nice macro algae like pom pom macro in the main display, and maybe a refugium in the second AIO chamber down the road if that becomes necessary. I'll probably also invest in some bio balls for denitrification.

Water:
For now, just pre-mixed saltwater from the LFS.

Plans for stocking:
This will start as a FOWLR with some macro algae in the display, and then I want to make it a softie and zoa tank, with maybe 1 or two show pieces of LPS like a frogspawn and a bubble coral, plus a BTA for the clown too.

I also love inverts (I breed FW neocaridina shrimp) so I'm really excited about the clean up crew. I'm aiming to have a few species of hermits (1 each), one or two peppermint shrimp, a trochus snail or two, nasarius snails, and maybe one more small shrimp species if I can manage it, but I don't want to go overboard.

Upcoming plans:
Tomorrow I'm going to test fill the tank, and then start playing with making a rock scape. Then I'll need to cut my acrylic and install the false back and baffles. I'll keep y'all posted!

Today I did some potential rock layouts just on some cardboard. My rocks are all pretty large so I think I might spot one or two of them, although the wife has already voted for a certain scape from the pictures, so.. we'll see . I'll post the highlights. I'm interested in hearing any opinions on what's looks best and most functional. 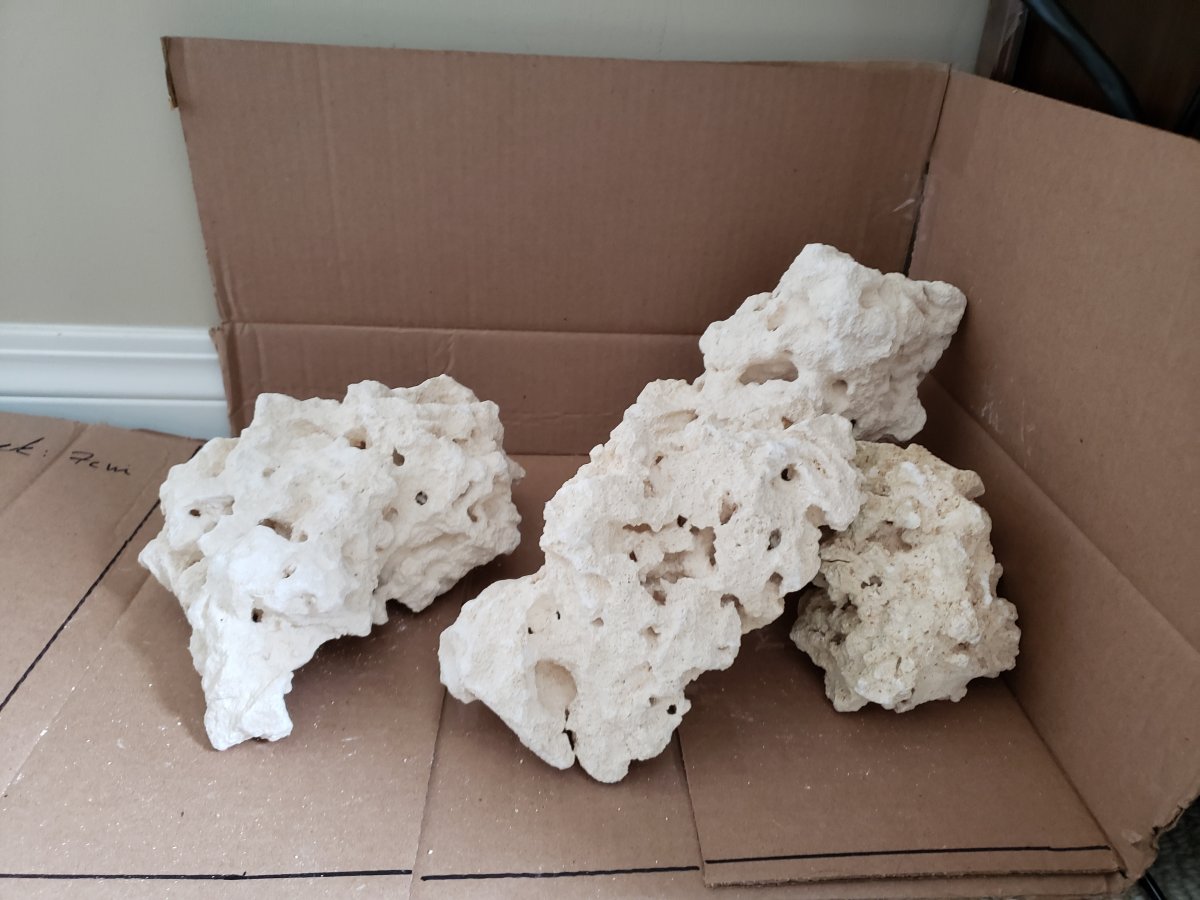 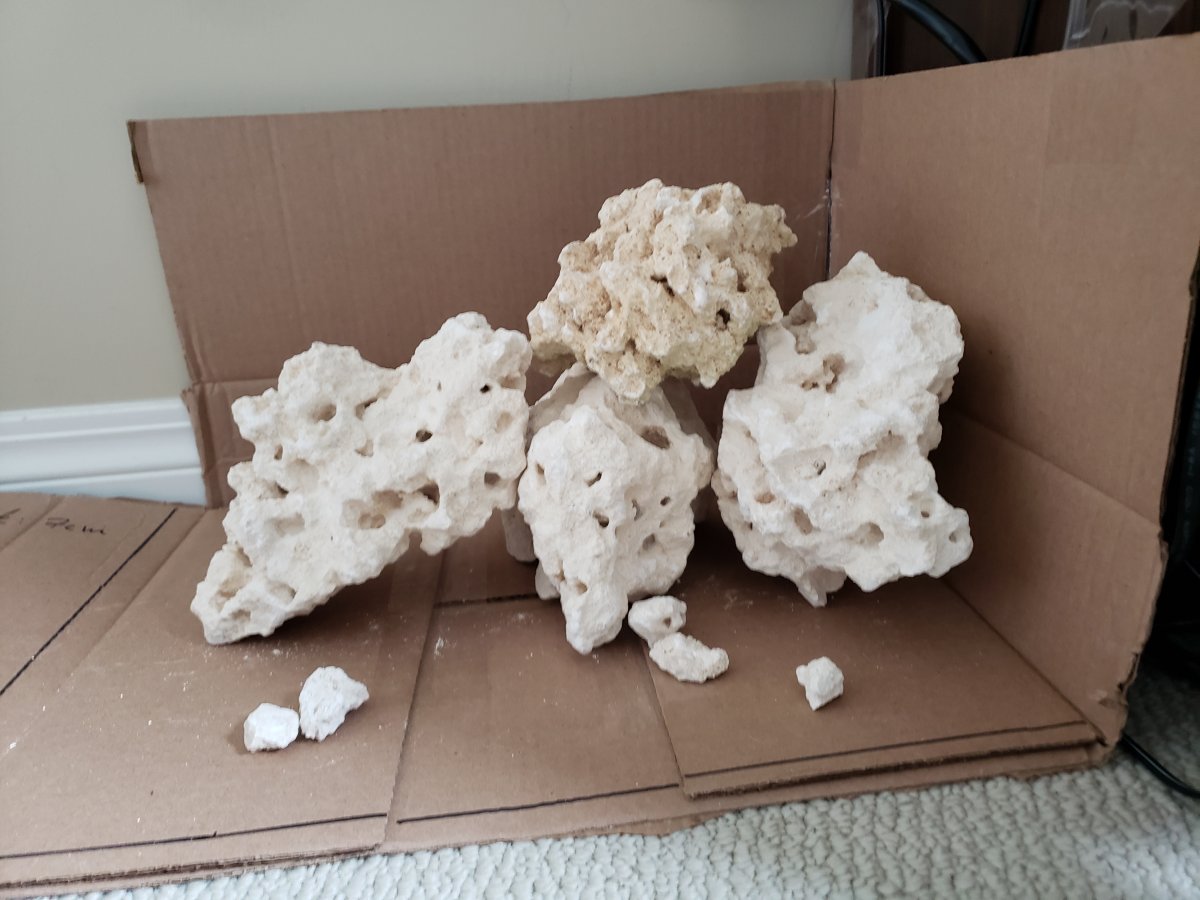 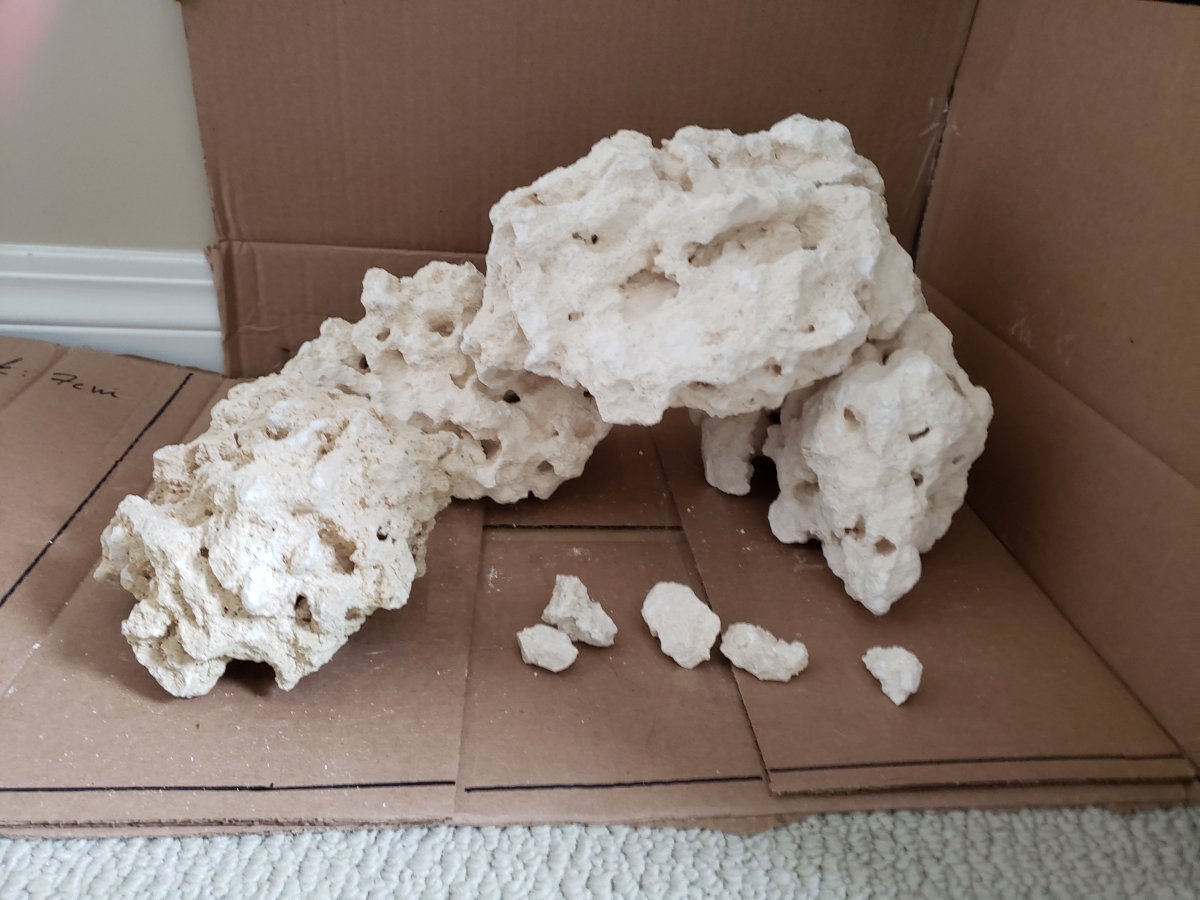 Welcome to R2R. I really like your DIY-concept and can't wait to see more fotos and how it develops.

I am more coral- than fish-type of hobbyist, so I am favoring the first picture of your aquascape-ideas. But probably your wife is more into nr. 3 .

Anyway, GL on your adventure and make sure to keep us updated with lots of pictures.
OP

Emptyness said:
Welcome to R2R. I really like your DIY-concept and can't wait to see more fotos and how it develops.

I am more coral- than fish-type of hobbyist, so I am favoring the first picture of your aquascape-ideas. But probably your wife is more into nr. 3 .

Anyway, GL on your adventure and make sure to keep us updated with lots of pictures.
Click to expand...

Thanks for the support! I also like the first photo the most, but we'll see. I still want to break a rock or two.

I have been working on this a lot but I'm finding that the learning curve for building a tank is steeper than I thought, so I haven't really made much progress. This weekend I'll be breaking down my second attempt because I haven't gotten the silicone to make a perfect seal yet. I also switched the entire tank over to 6mm (1/4") glass, which is a bit tougher to deal with because the spaces inside the seams are wider. I should have water in it some time next week though!

Here's a quick picture of the false back for filtration. I made the weir teeth on a table saw using 1/4" thick peices of scrap plywood to space the peice away from the cutting guide, removing one after each cut. We also had a peice of wood clamped behind the blade to stop each slot at the right depth. A couple of the weir teeth broke off during cutting, but super gluing them back afterward turned out pretty well. 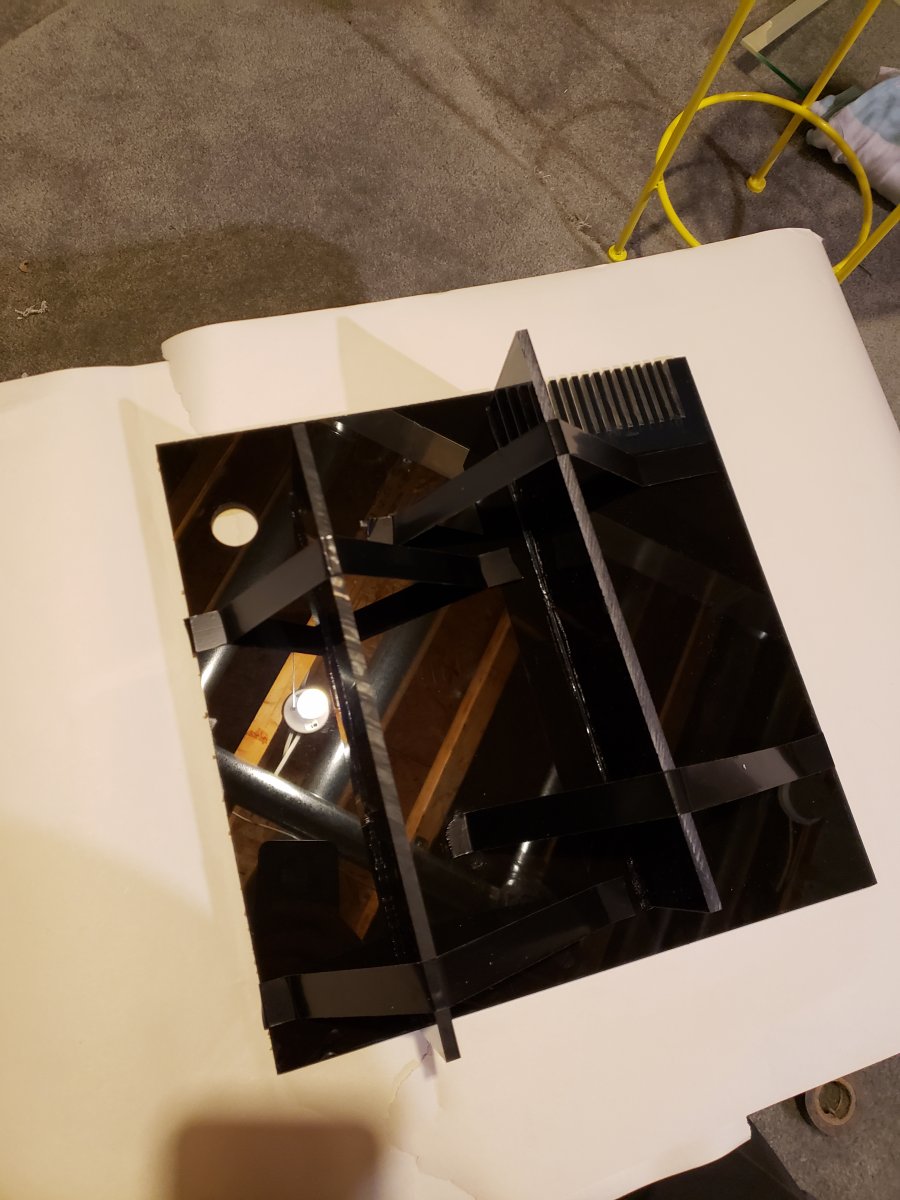 Alrighty, long pause between posts here, because I had to buy new glass and rebuild the talk a third time. Luckily, my first DIY tank build turned into 3 builds which turned into a lot of practice, so I'm ok with it.

The tank is full, scaped, and has had a black lyretail molly in it for about 10 days. I'm feeding really light (a pinch every other day) and just waiting for the cycle to kick in.

It seems like the tank is suuuuper sterile. I've had the tank set up with the lights on for 16 days and there isn't a speck of algae in the tank. The molly is constantly pecking at the rocks and sifting the sand. I've heard that they're great algae eaters so do you I'm going to get any algae? I'm honestly hoping to get some algae so I can start stocking hermits and snails. Let me know what you think! Should I just wait longer and let nutrients rise?

The only thing I've added that *could* have any algae on it is the live sand, so I'm thinking of introducing a small peice of live rock or even a single coral to get the algae growth rolling.