Cycling update...I thought on Sunday that I might have been nearly ready, but when I checked my numbers and my ammonia actually went up. Kinda odd because I didn't add any. Looking around it looks like sometimes live sand can produce ammonia.

Thought I would post a few setup shots including my sump area.

Lined up some Frostbite Clownfish from Dr. Reef that I will get in a few weeks when the tank is cycled, and will be getting a Reef Pack from IPSF soon as well to get some bio diversity going.

I started putting my qt tank together tonight so that I can get it going for corals. Originally it was going to be a bare tank but since I have decided that I am just going to buy quarantined fish it doesn't need to be bare anymore since I won't be medicating the tank. So I am debating on putting some rock in along with a smaller frag rack to give a little more surface for biological filtration. 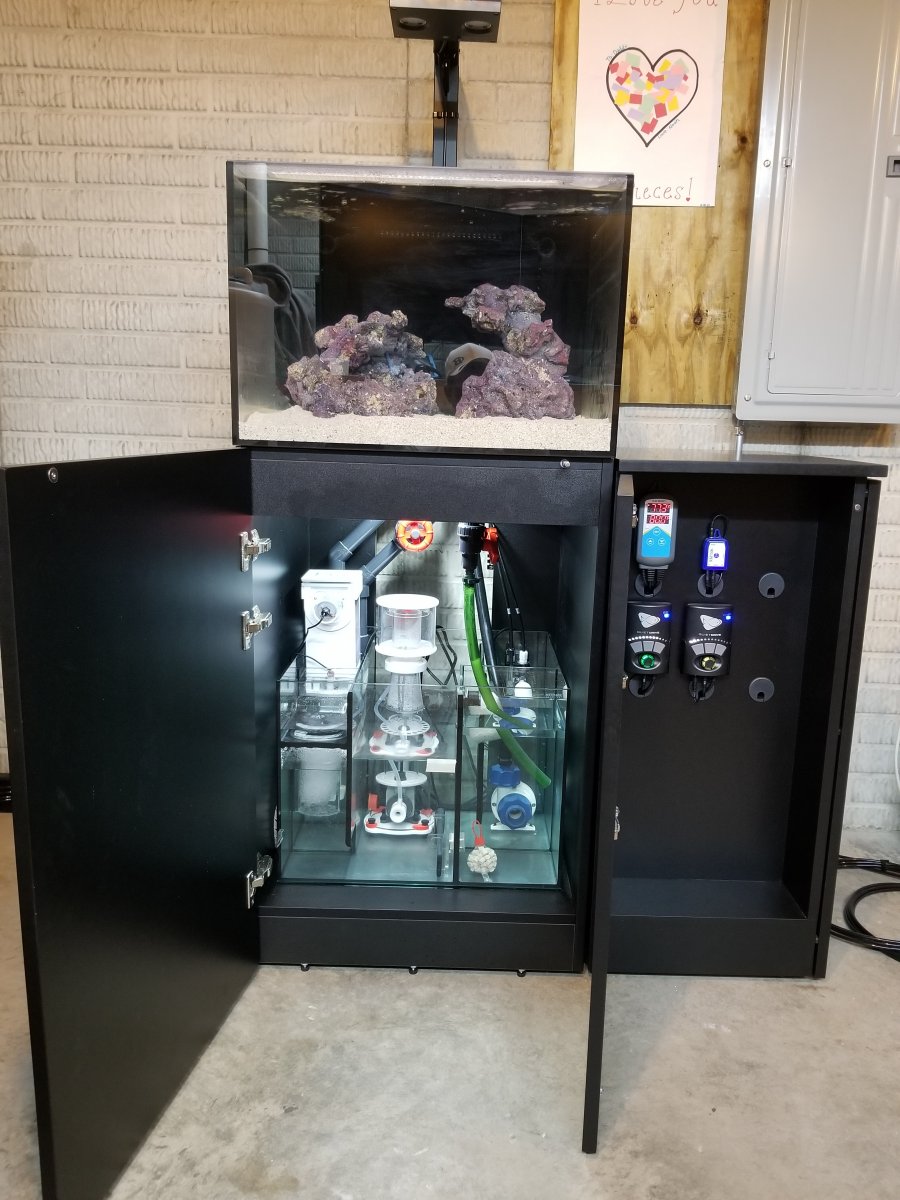 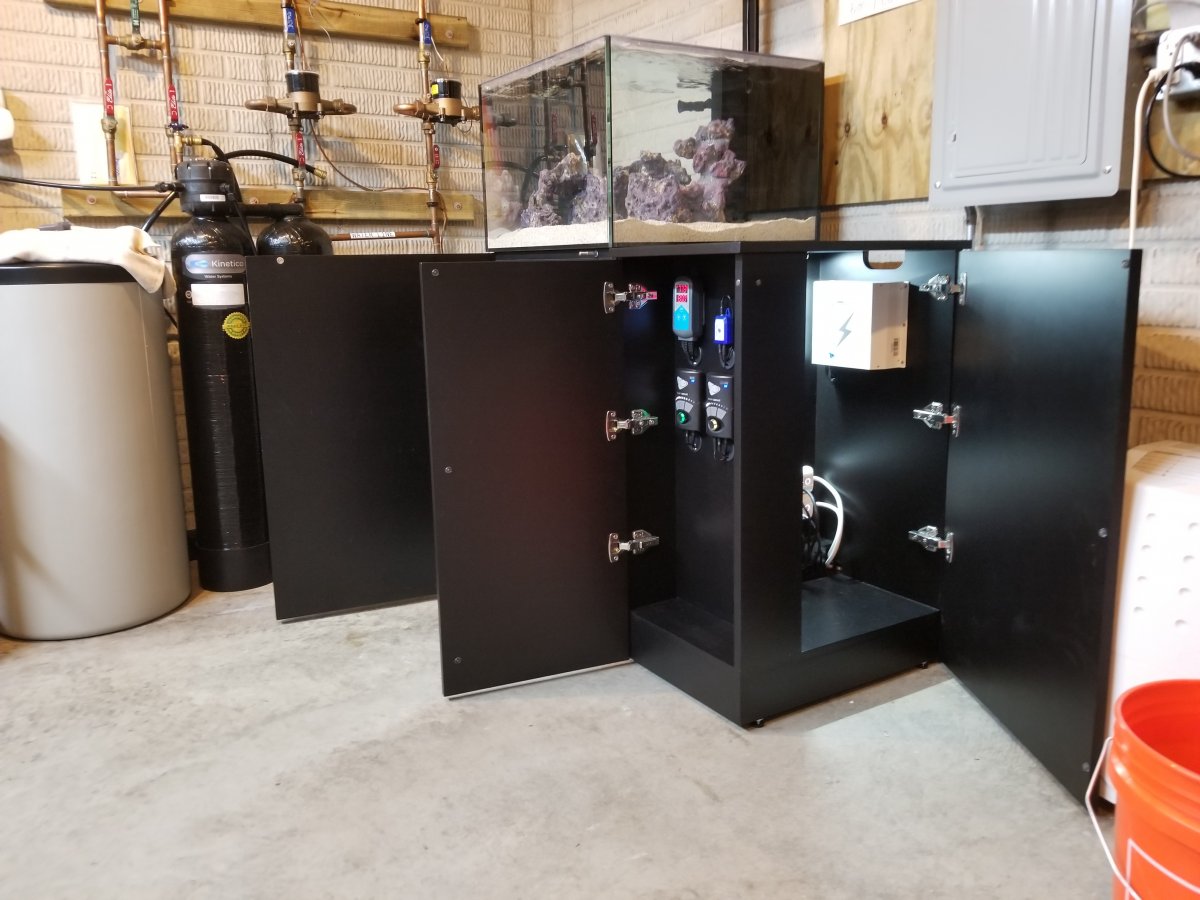 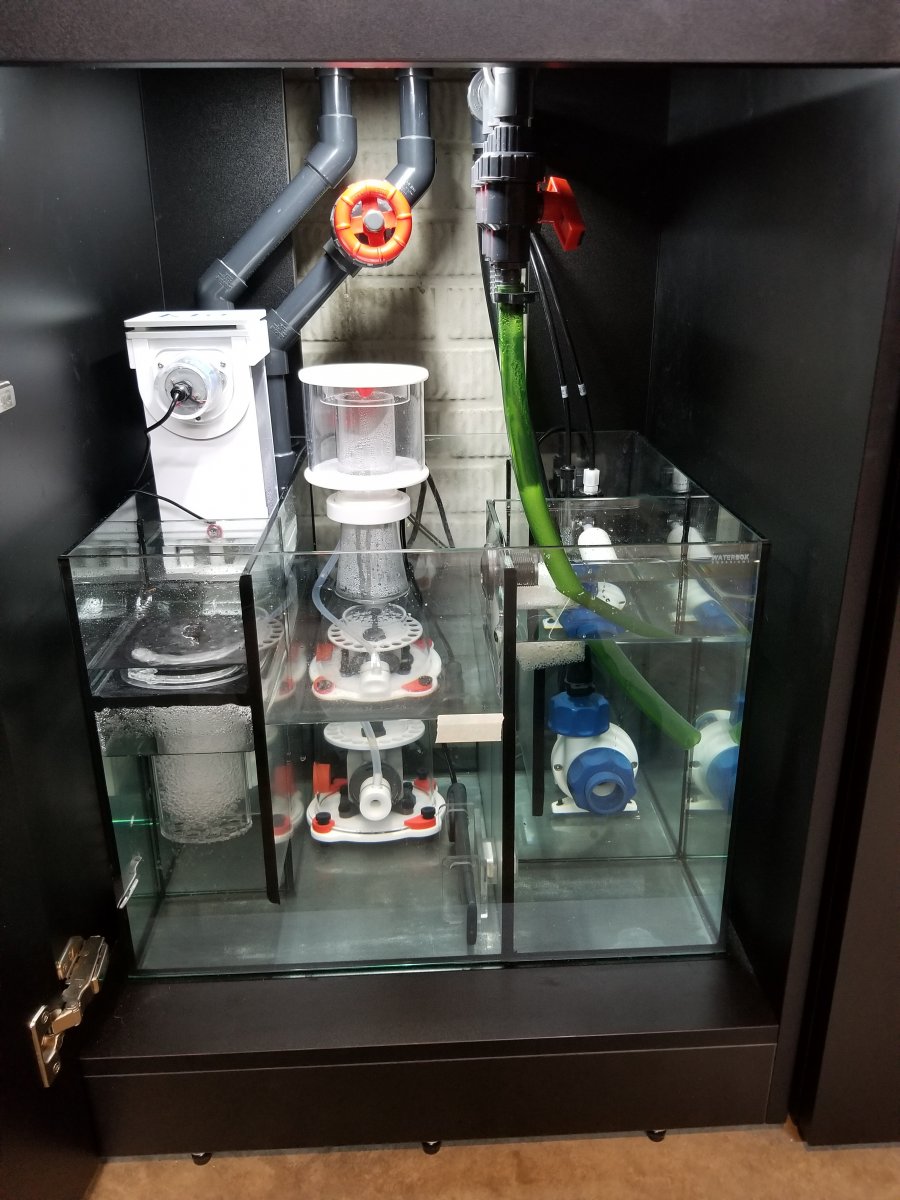 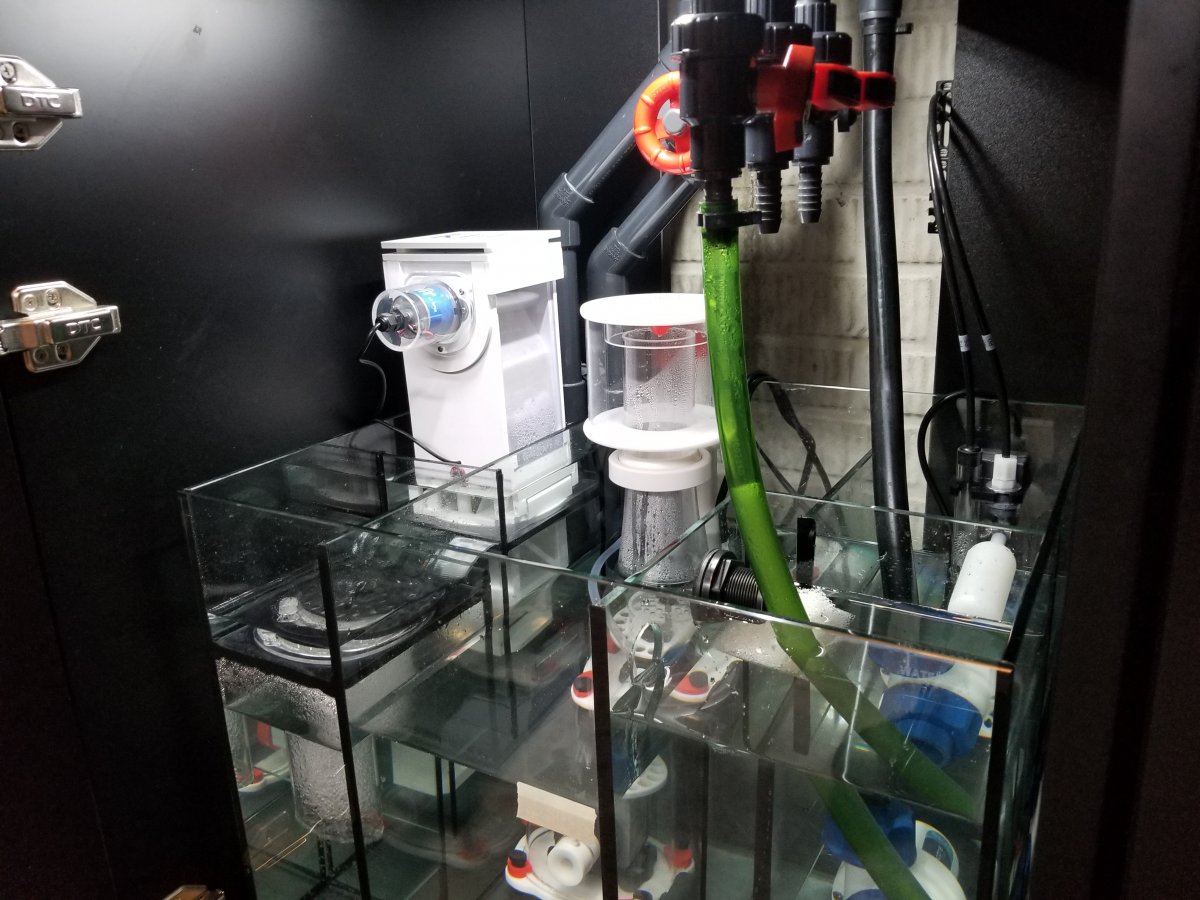 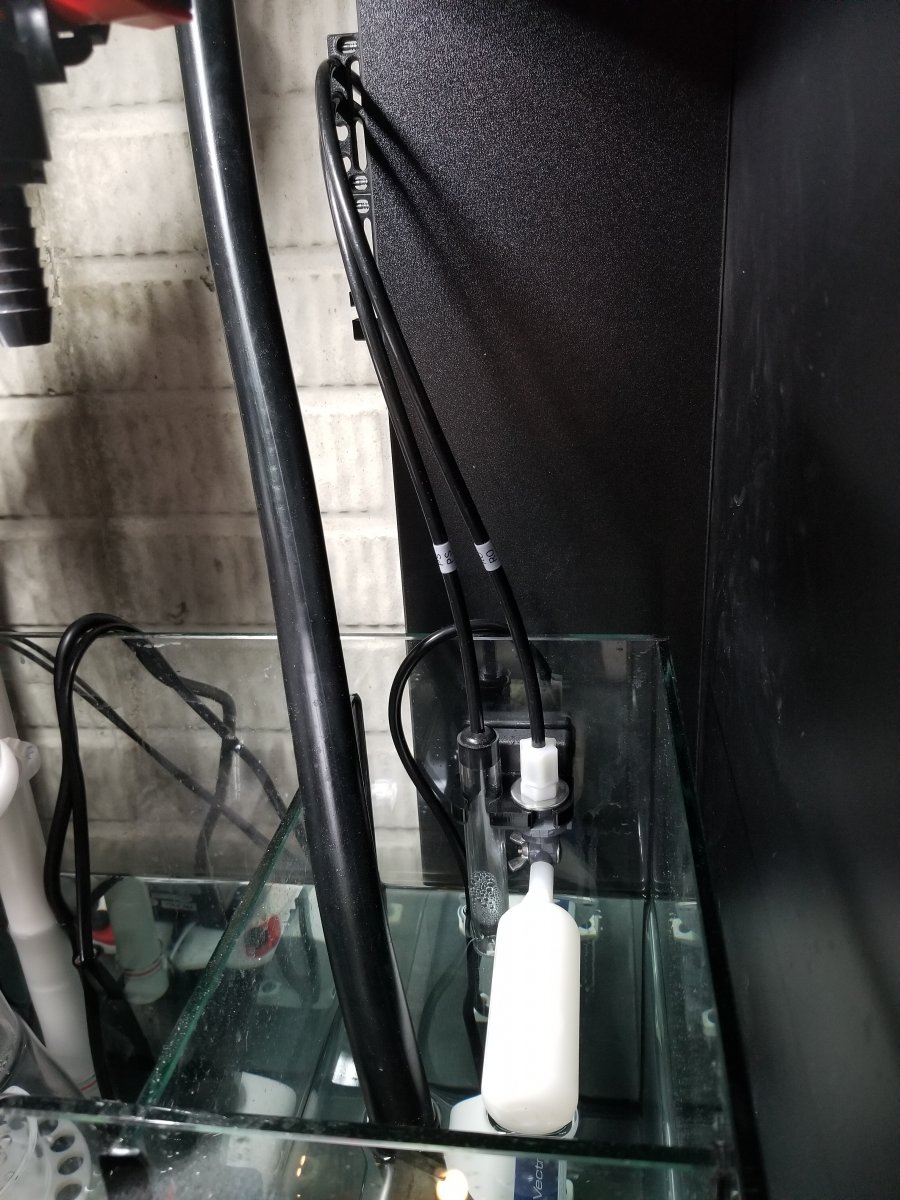 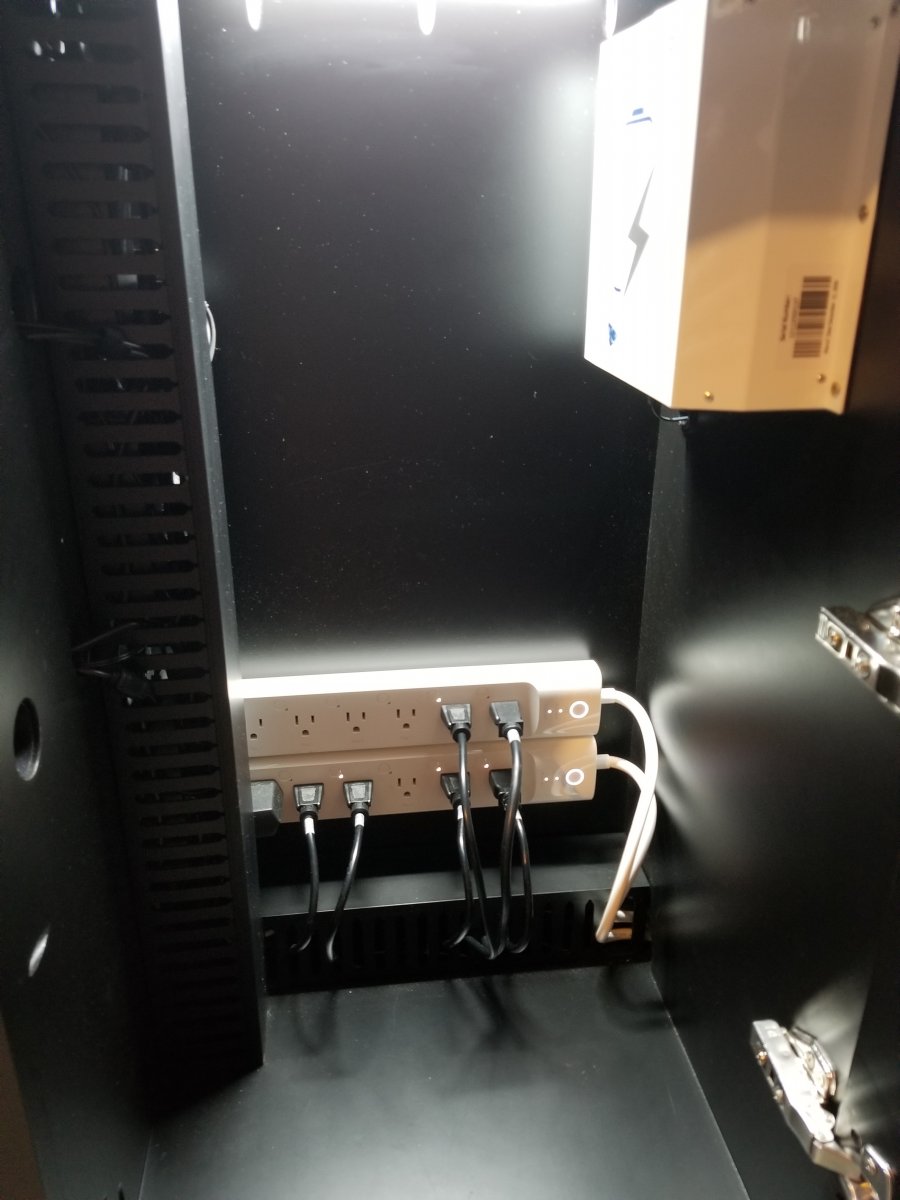 A few shots of the QT setup. Planning on filling it with DT water soon. Hoping to order a few corals in the next few weeks. 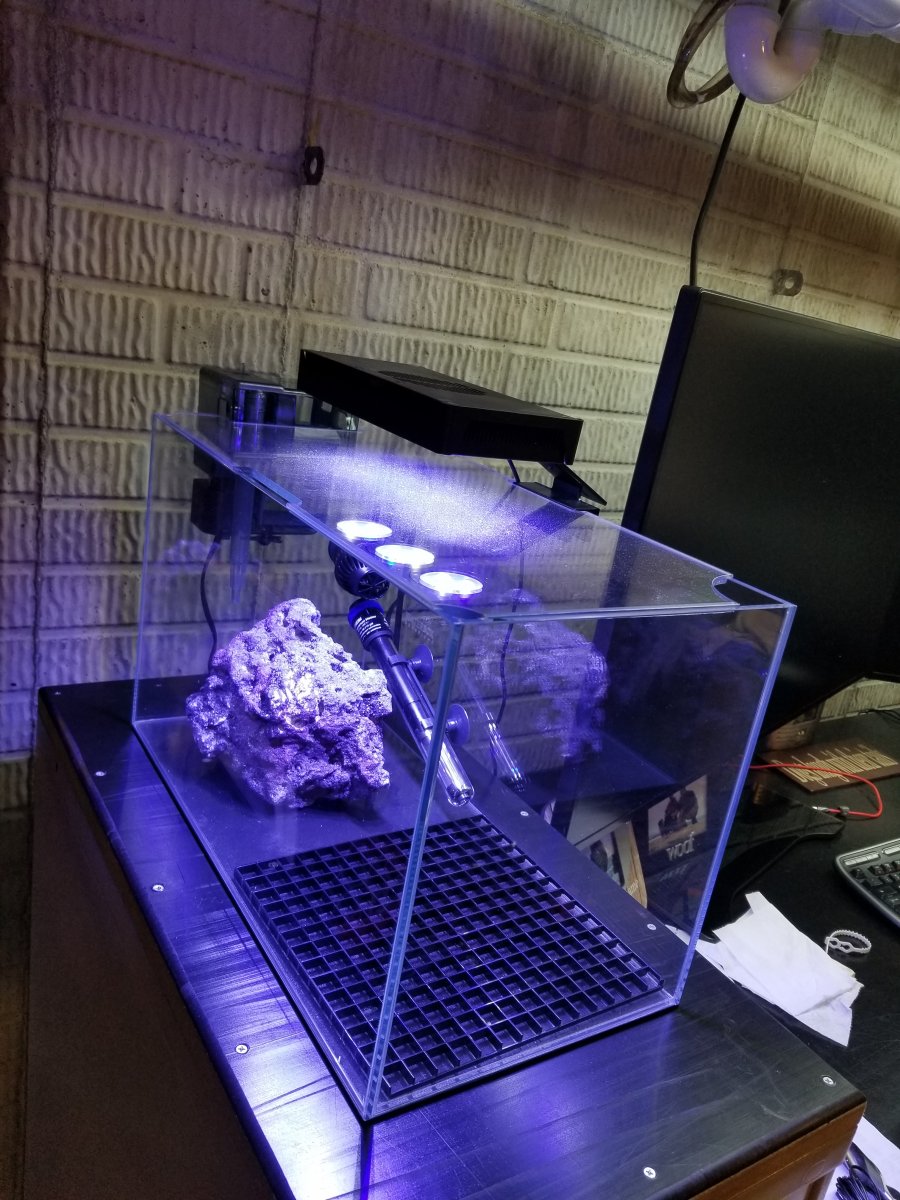 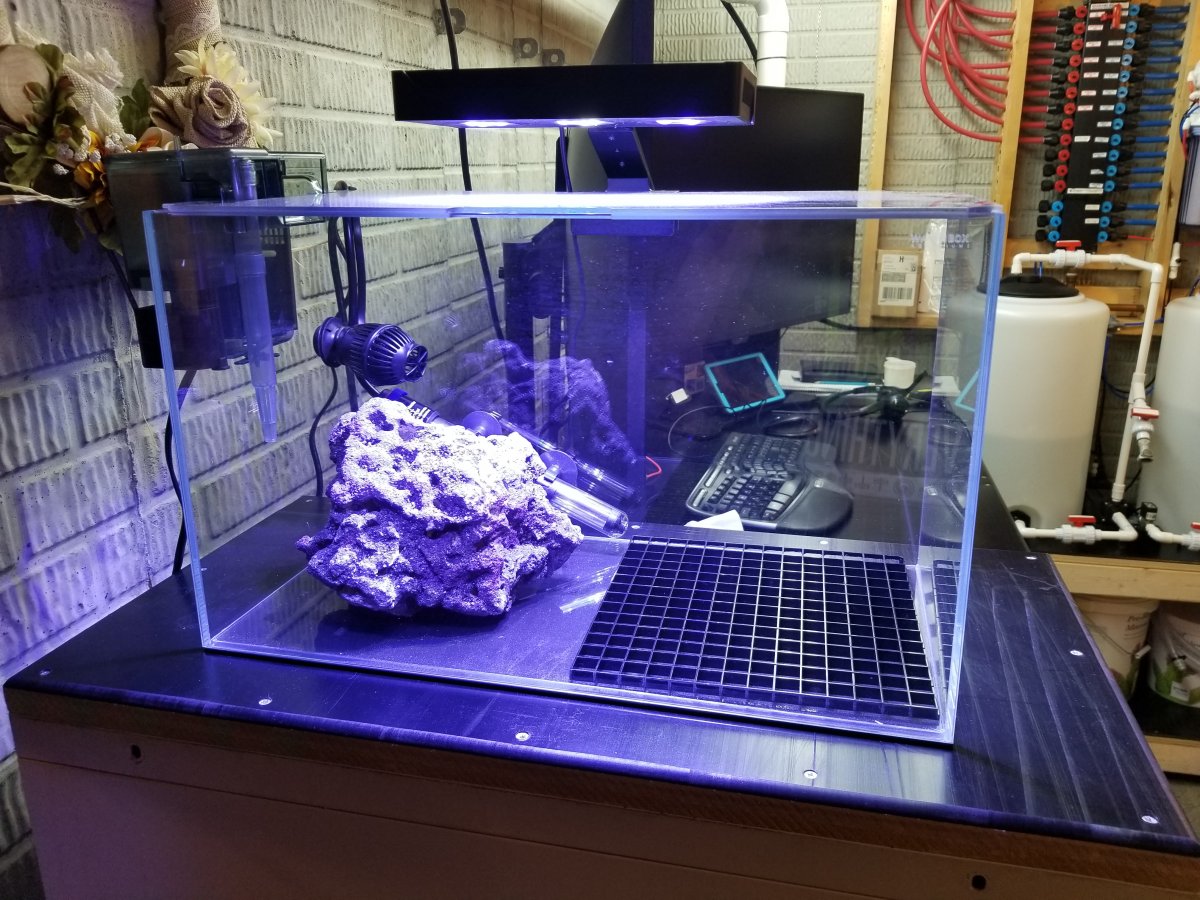 Finally reached 0ppm ammonia today, and nitrites are 1.5ppm. Going to do another dose of ammonia and see how long it takes to read 0ppm again.
OP

Tested ammonia tonight after dosing yesterday and I got the following:
Ammonia 0ppm
Nitrite 2ppm
Nitrate 100ppm (Not sure if this is accurate. I will test more in the coming days to confirm)

I did a 10 gallon water change and used that water to fill up my QT tank to get that up and running.

I think the tank is ready to go. I am making an order from IPSF tomorrow for some biodiversity, and will probably get my fish next week.

I still need to find a par meter to use somehow since BRS is not renting them anymore before I can get any corals. This is the next thing on my list to complete.

I am pretty excited to get things rolling.
Last edited: May 2, 2021

Lfs may let you rent one, local clubs usually have one and if all that fails I'm sure a member on here would rent you one
OP

count krunk said:
Lfs may let you rent one, local clubs usually have one and if all that fails I'm sure a member on here would rent you one
Click to expand...

Thanks for the tip. I will check around.
OP

Quick update. My nitrites seem to be stuck at 1.5-2 ppm. It's been over 3 weeks now so I can't figure out what's going on. If I dose ammonia, the next day the ammonia will read 0ppm. I have tried nitrate tests but it comes out like 100ppm, which I find hard to believe, but doing some research says that nitrite can cause false nitrate readings.

Not sure what to do.
OP

My first inhabitants are coming tomorrow. I have a live sand reef pack coming from IPSF. Pretty excited about that.

I am trying to get some QT'd Frostbite Clownfish lined up but am having a little difficulty getting ahold of the vendor so I might have to go another route which would mean another 6 weeks or so before I have any fish. I will have to start "Ghost" feeding. my tank so that the inverts have something to eat.

I also started up my Skimmer, but it was constantly overflowing. I ran it in vinegar last night in a bucket and it was working fine. Put it back in my tank today and it still overflows. I am thinking there are just not enough organics in the water to work properly, so I am just going to leave it off for now.

Lastly I have my mini Refugium ready to go, but I need a light. I am set on getting the Tunze Refugium Light, but they are out of stock everywhere until like June. Here's a pic of my mini Fuge. 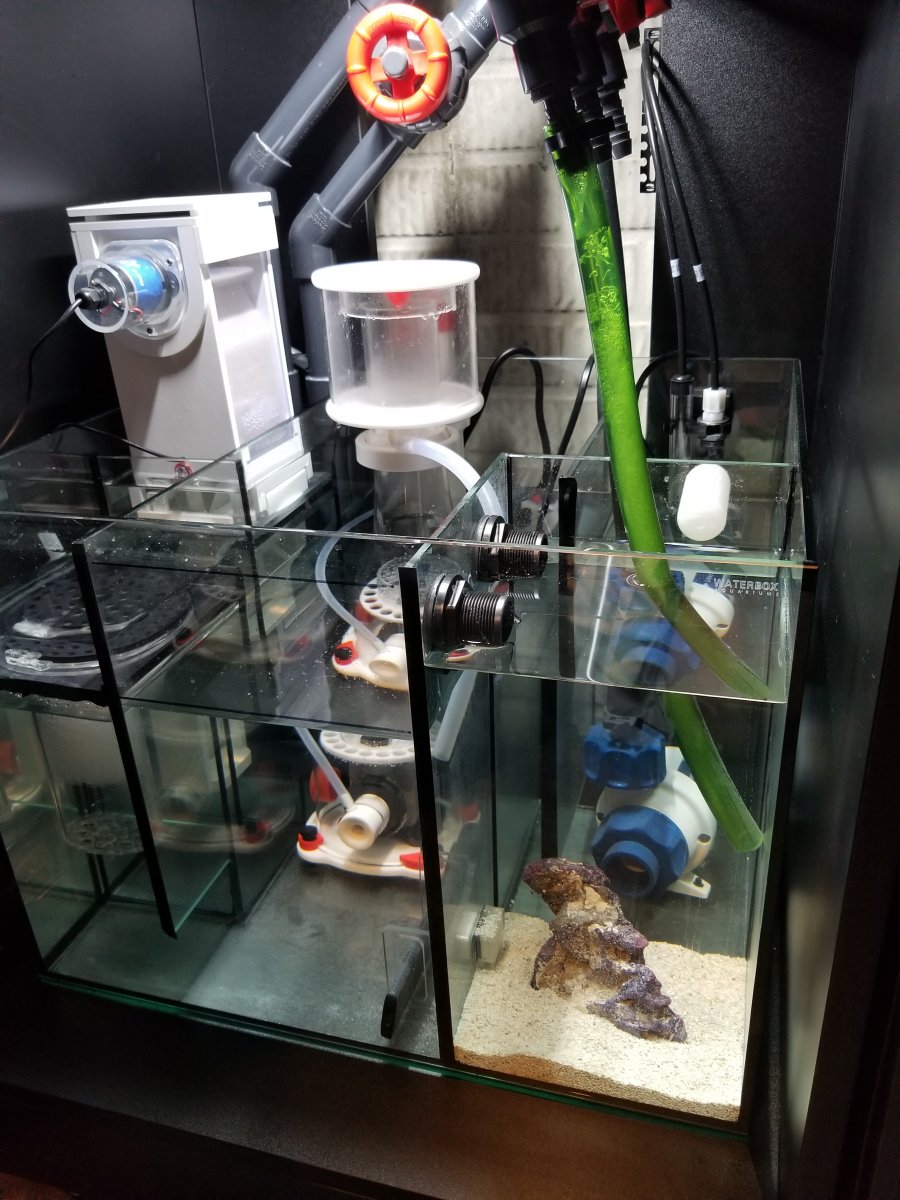 Received my inverts today from IPSF in perfect condition. It had snails, bristle worms (the good kind), amphipods, some sand, a bag of bacteria, and some mud. Acclimated them and then let them loose.

The hermit crabs are fun to watch. The snails keep trying to escape so good thing I have a lid. I keep placing them back on the rocks, so hopefully they will get the message eventually.

Will post some pictures when the water clears up.

A few pics of snails and hermit crabs. Apologize for the not so great photos. I am still figuring out how to take decent pictures with my phone. I am going to need to get an orange filter. 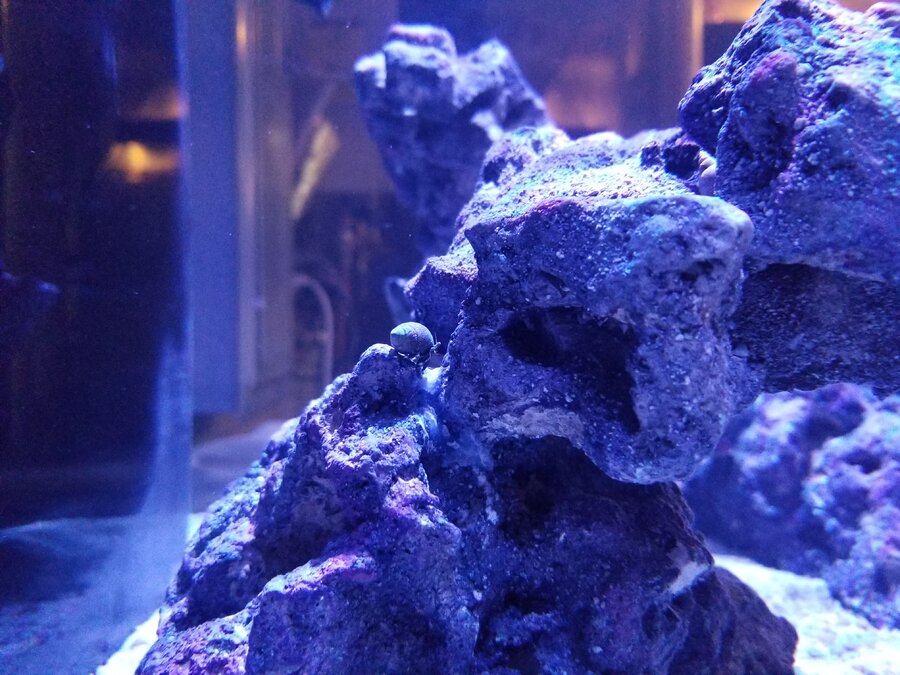 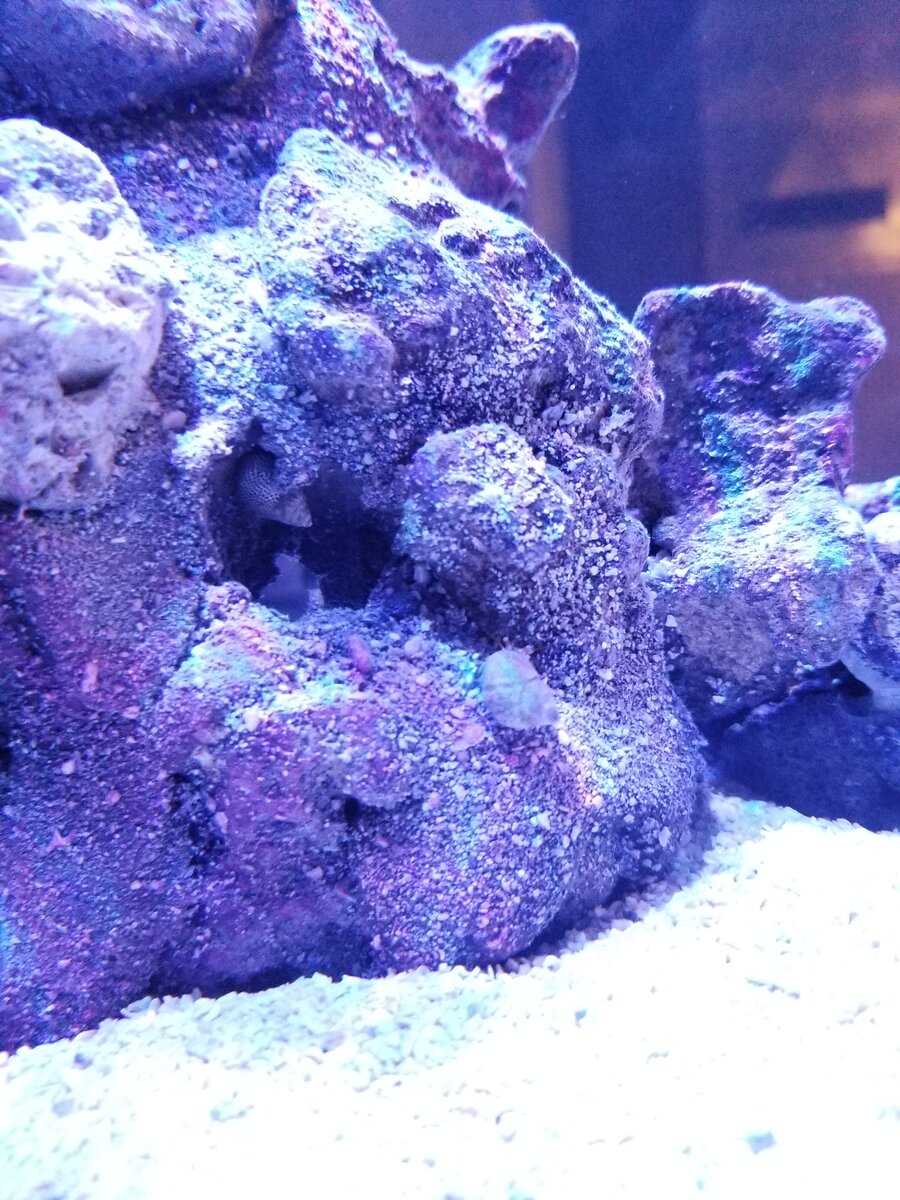 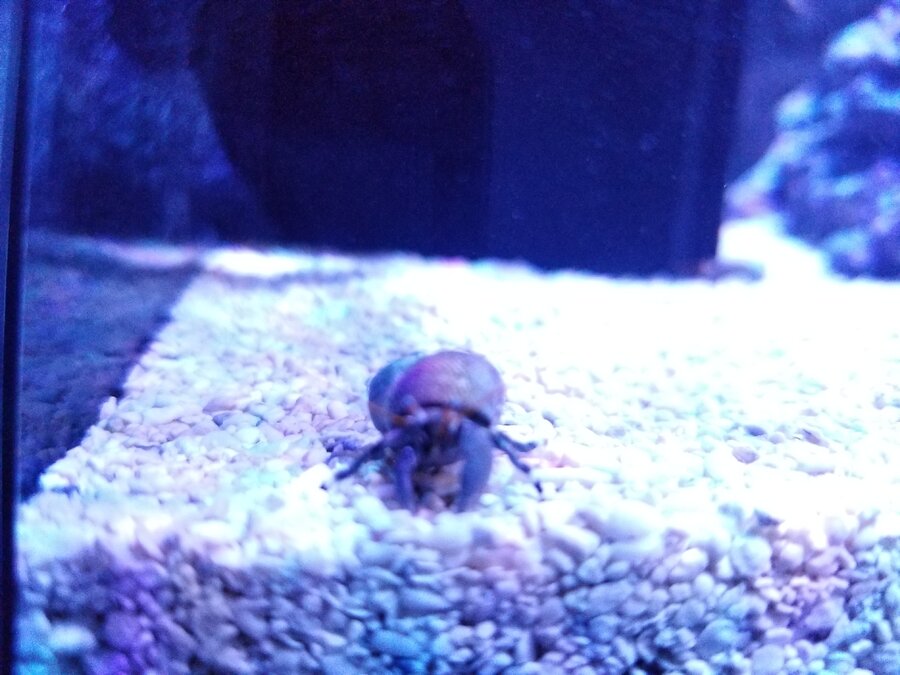 I am going to order a few more fish than originally planned so I am working on a fish list with the help of the users on this forum. I hope to have that wrapped up soon.
Last edited: May 14, 2021
OP

So s couple updates. Got the tracking information for the first round of fish thanks to Dr. Reef. . They will be here tomorrow.

I also have a few other goodies on the way.

I need a skimmer stand because I had to raise the water level in my sump to quiet down my 2nd empty sock holder. Now I can't stop my protein skimmer from overflowing.

Needed a guard for my MP40 because my snails are not smart enough to stay out of it. I heard a strange ticking the other day and it was the pump hitting a snail shell.

Got the fish today and they are gorgeous. Got them acclimated and into thier new home. They are in good condition and already eating. Couldn't be happier. .

Frostbite Clownfish & Tailspot Blenny. (Couldn't get a picture of the Blenny yet, he is hiding out.) 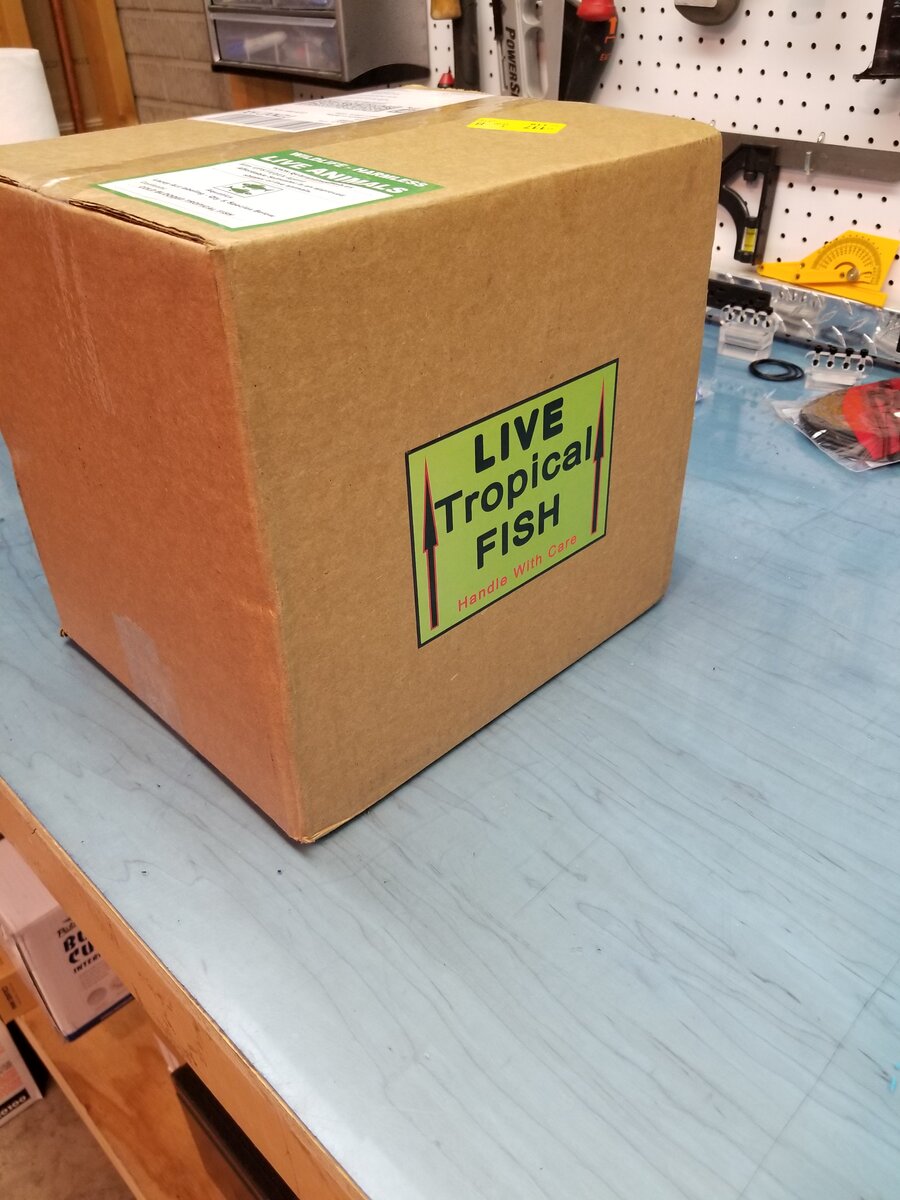 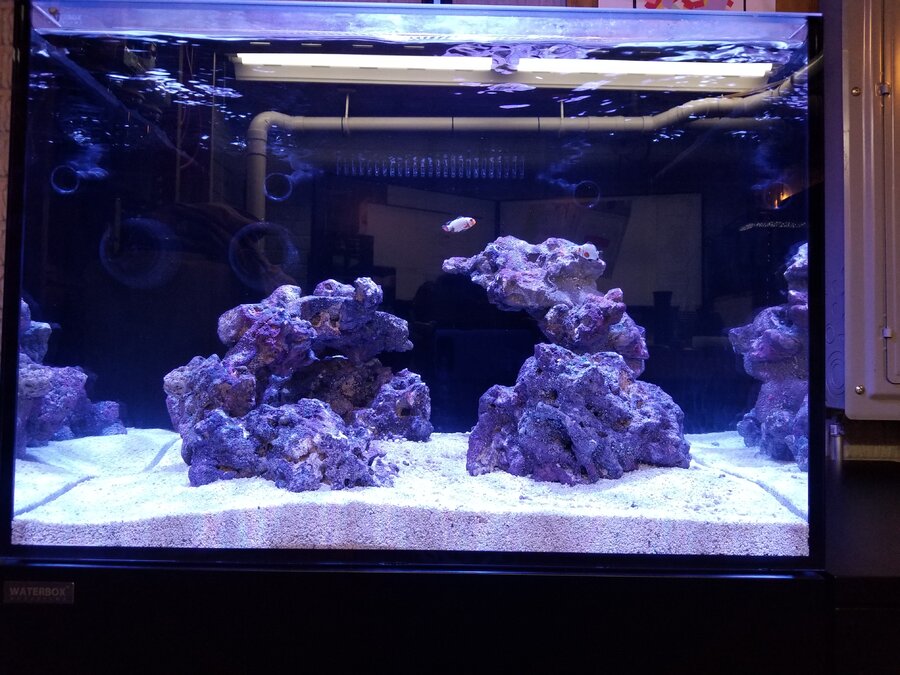 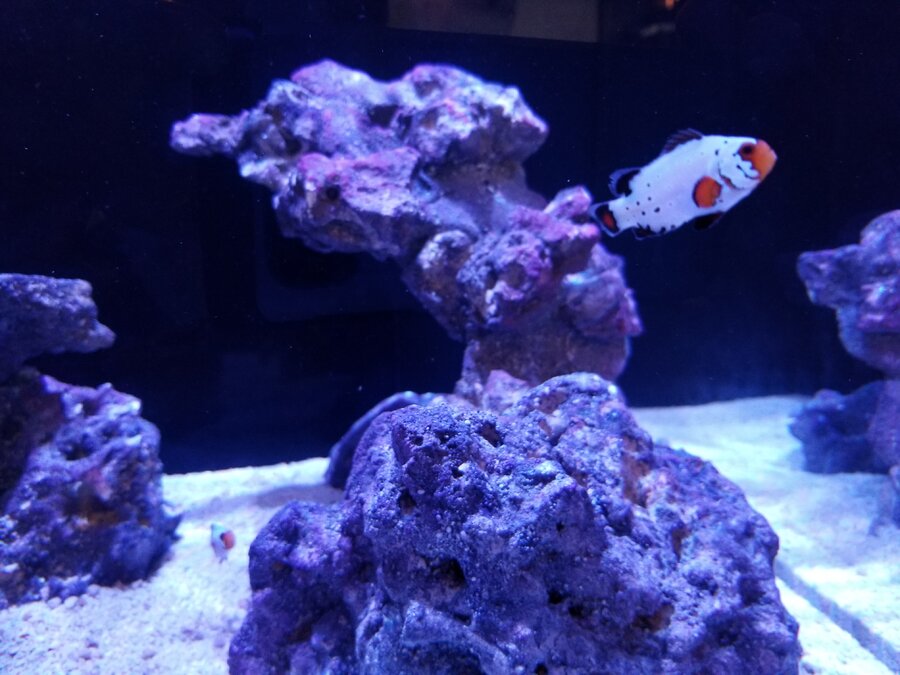 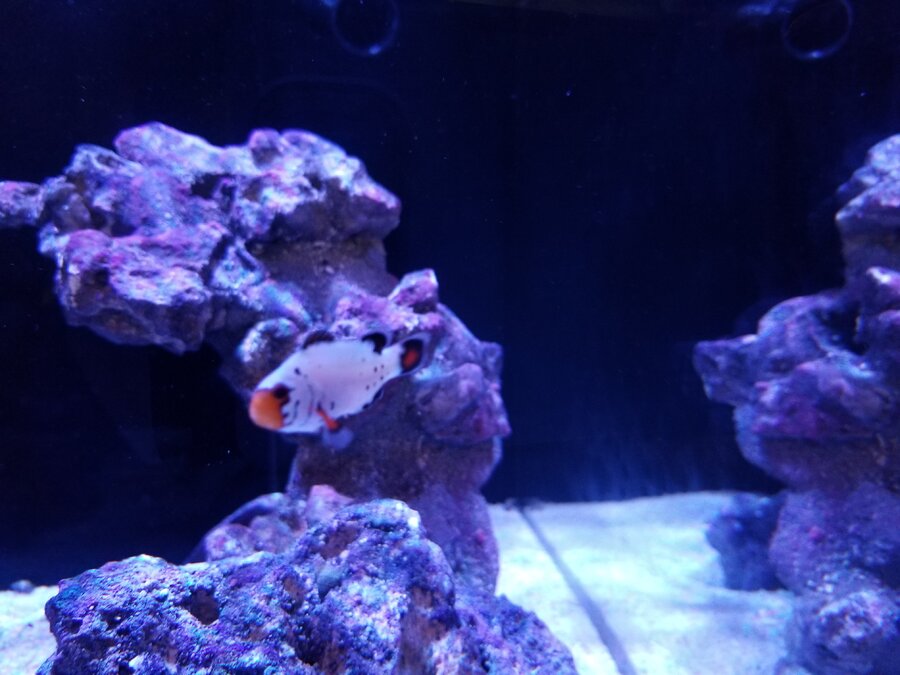 Made a few updates on the last couple of days. It's a little wordy so bear with me.

First I got my Icecap skimmer stand. I am very pleased with the quality, especially for the price. The thing was only 25 dollars and has adjustable legs. I didn't use the adjustable legs only because I needed it as short as possible but they are there if you need them. Here's a little backstory....I have a Bubble Magus Curve 5 Skimmer, and according to the instructions the recommended water level is 25cm(9.84in) to 27cm (10.63in). The water level in my sump is at ~10 inches, which should be right in the middle. However at this depth no matter what I did I could not get it to stop overflowing. It ran it for like a week straight, then I tried running it in vinegar overnight, and even put a micro adjust valve on the air line, but nothing worked. And to top it off it was leaking micro bubbles everywhere. So I hunted around the internet and it sounded like many people were experiencing the same problem. Here and there someone would say they were running them in 9.5 inches or something, but they were few and far between. So I ordered the stand to raise it up.

It works great. I am finally making skimmate and no more microbubbles. With the legs removed from the stand it put me at a depth of about 7 inches. 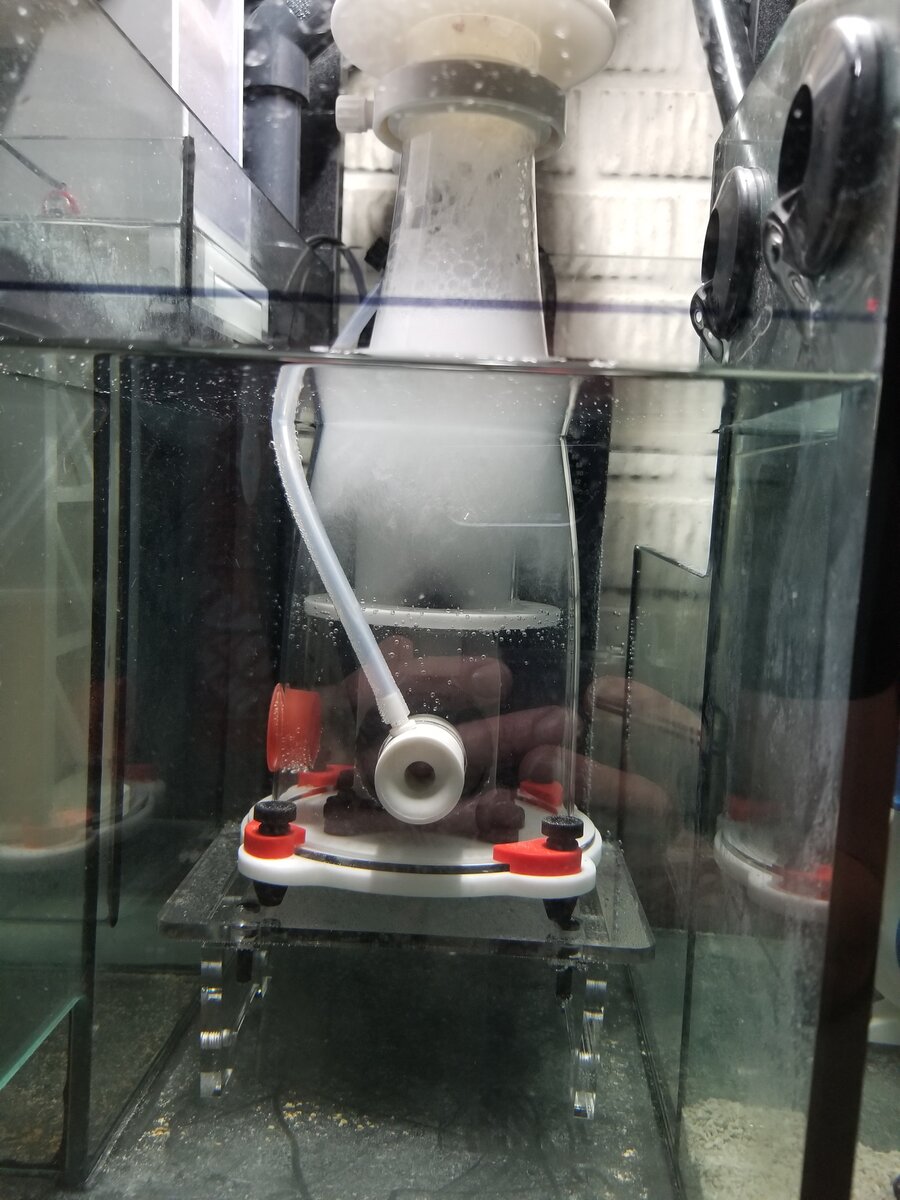 In order to fit the skimmer stand in my sump I had to move my Cobalt Neotherm heater. I originally had it mounted horizontally at the bottom of the sump, but since I recently raised the water level in my sump I could now mount it vertically. Interestingly this small change affected my temperature by about 1 degree. It had run at a constant 77.3 the entire time the aquarium has had water. After changing nothing other than the orientation, my temperature jumped to 78.4, mind you I didn't even unplug it when I moved it..... Very interesting. It has stayed stable at 78.4 since the change but I am going to keep an eye on it.

Next up I replaced the 1/4" mesh in my lid with 1/8" mesh. It was pretty simple and I am very pleased with the result. Having a spline roller makes the job a breeze. The first picture shows the difference in the mesh sizes, and second is the finished product. 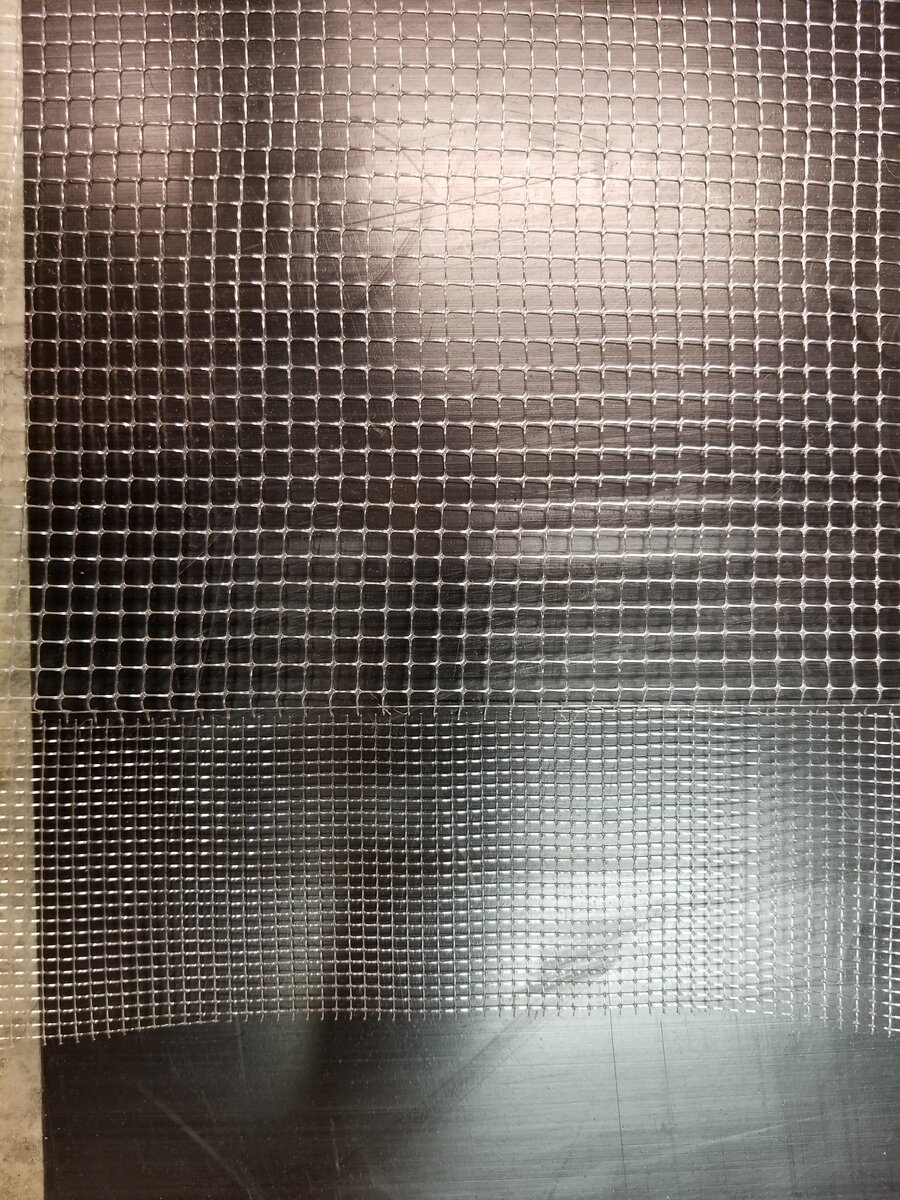 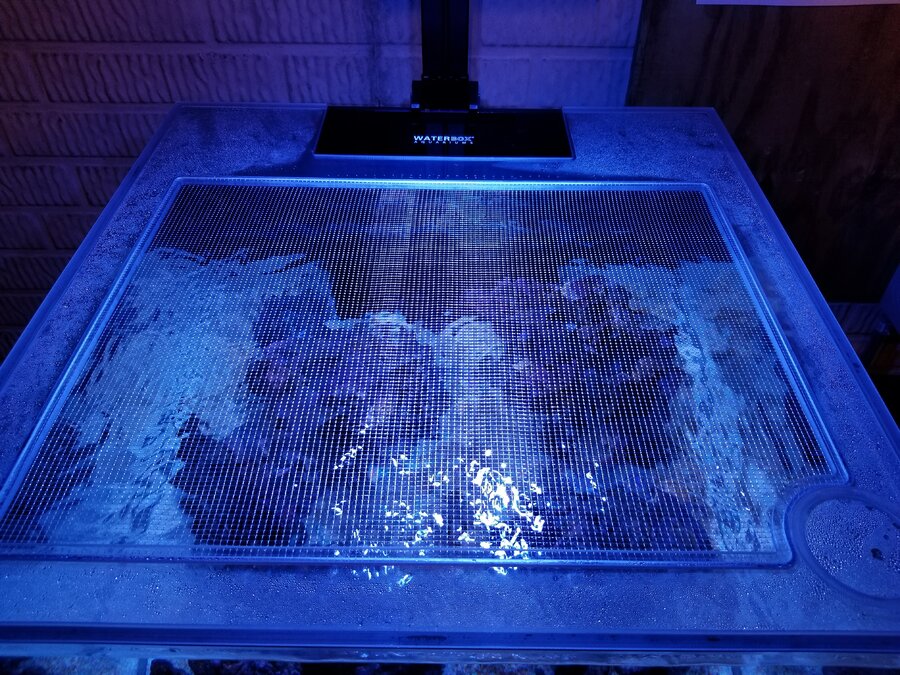 Lastly I had ordered a nem guard for my MP40 from @Sisterlimonpot. This thing is amazing. It looks almost factory (only the fact that it was 3d printed gives it away) and fits perfect. It's looks better imo than the slip on nem guards that go over the factory cage. 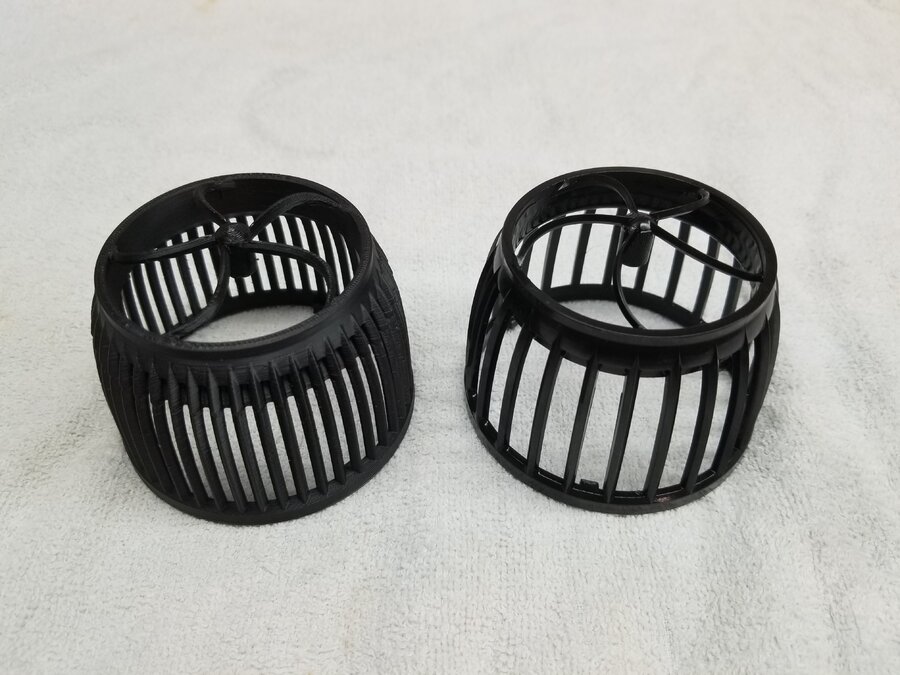 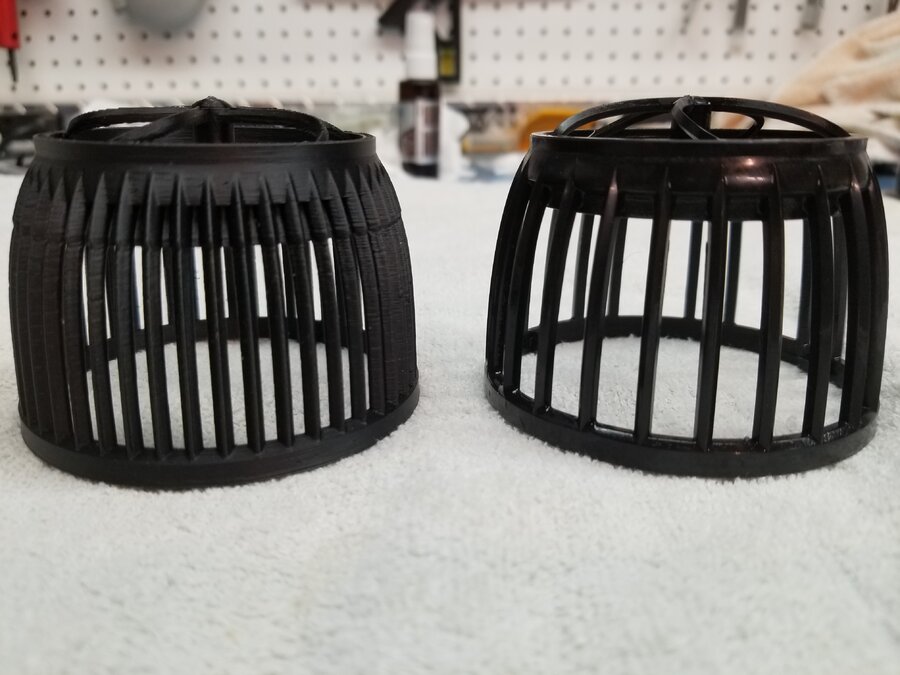 Last but not least all of my new fish are eating and appear healthy. I again couldn't be happier with @Dr.Reef . I was a little worried for a few days because 1 of the Clownfish stopped eating and seemed to be breathing hard, but he also seemed to be challenging the other Clownfish for dominance. He is eating again and they seem to have settled in and pretty much hang out together all the time now. . Must have just been stressed from the confrontation.

I have also been enjoying the Blenny. He is a cool fish. He is starting to come out more now, especially at food time.
OP

So I put it at an angle so that the entire heater was underwater and over the next few hours the temperature already started to settle back to 77.3. The next few days will tell if the fluctuation goes away.

All of the fish are doing well and seem to be settling in. Lenny (the Blenny) had started to come out more. He is enjoyable to watch.

I will order my next round of fish in a couple of weeks and I need to get some corals coming. I am trying to do lots of research, but there are so many options of what to get and off where to buy. I am pretty settled on some Euphelias, maybe a pack of hammers or something as my first corals, but need to make a decision on which ones and from where. Plus I don't really know what's a good deal.

Things are still going good. Fish are all eating and doing well. I did lose 1 hermit crab. Not sure what happened, but everyone has been taking turns trying on the empty shell.

Heading Friday to cherry corals to get some corals.

Here are my latest parameters from both my dt and qt. I don't believe the nitrate on the QT but my plan is to continue to do water changes with water from my DT. 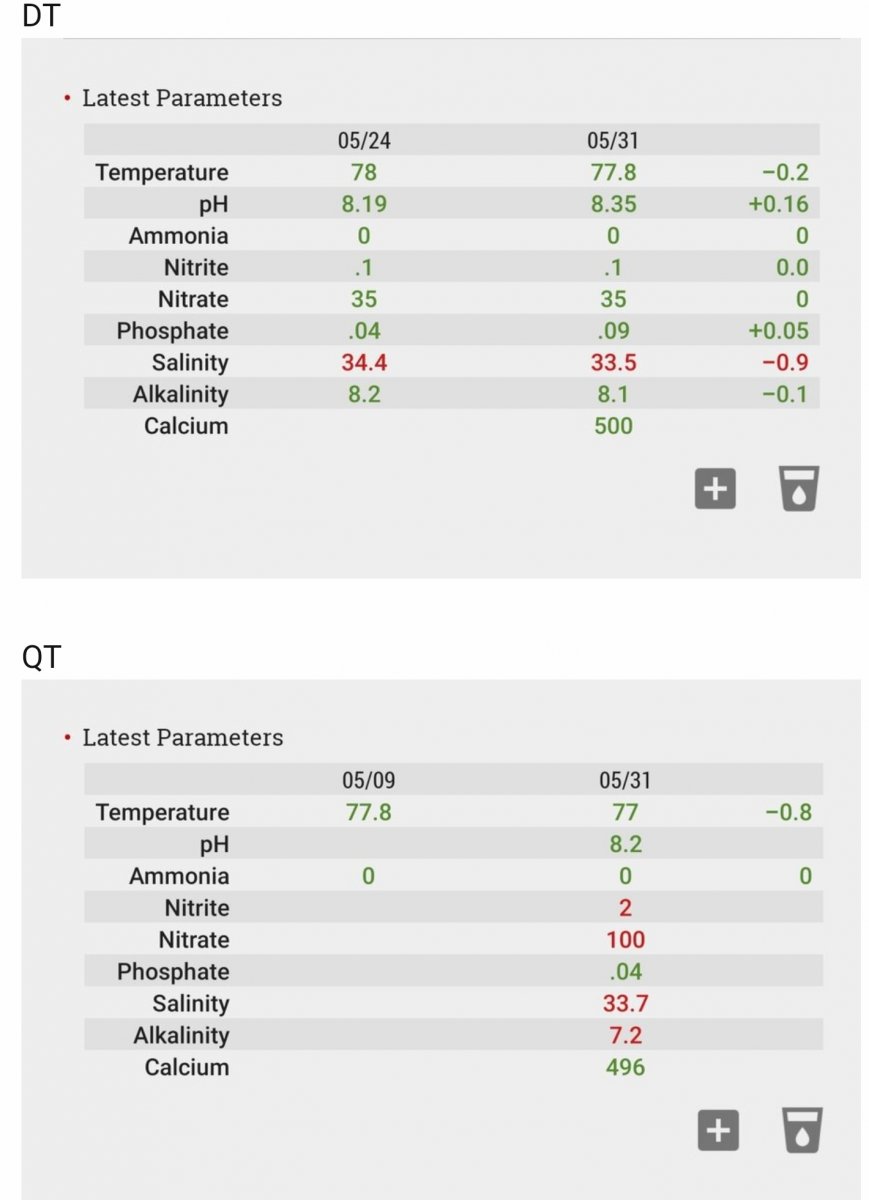