My Honest Opinion About The Dosetronic

Ok so I was looking for something different for dosing my Red Sea ABCD color program and decided what the heck, let me give the Dosetronic a shot. I was using an inexpensive CoralBox WiFi doser that I decided was time to retire (has it's own set of concerns) and invest in something that I figured was ready for me to put on my tank.

So I got the wife's permission and ordered the Dosetronic. You could only imagine the excitement, felt like it was Christmas. Finally got it delivered and immediately opened the box, mounted it, and set it up. I had already read through the manual prior to getting the unit so wasn't necessary to read it again, please setting up the unit is pretty simple.

I got the unit connected to my WiFi and commenced to setting up the Red Sea ABCD on channels 1-4 and I put calcium on channel 5 to help my CaRx out. I then setup my MANUAL schedule for the Red Sea channels 1-4. After that I added the calcium to channel 5. Did the obligatory prime, etc. to ensure everything was fine. No issues thus far.

Commenced to link my Alkatronic/Dosetronic together and activated Alkatronic mode on channel 5 ONLY. You have to do this if you want the Dosetronic/Alkatronic to work together for the channels that you have the toggle on. NOTE: I only had it on for pump 5. See images below:

Notice Alkatronic Mode toggle is off meaning that the Dosetronic should not do any action based upon the Alkatronic, only utilize the schedule that I have programmed. I programmed the schedule to do 5ml of each Red Sea ABCD starting at 9PMCST.

For the calcium, I decided to allow the Alkatronic for run SDA and determine the amount of calcium to dose daily. No concern about that. The Alkatronic switched to testing every 2 hours to determine how much calcium to dose. Around noon I get an alert on my phone about how much was dosed. When I saw the below alert I was furious: 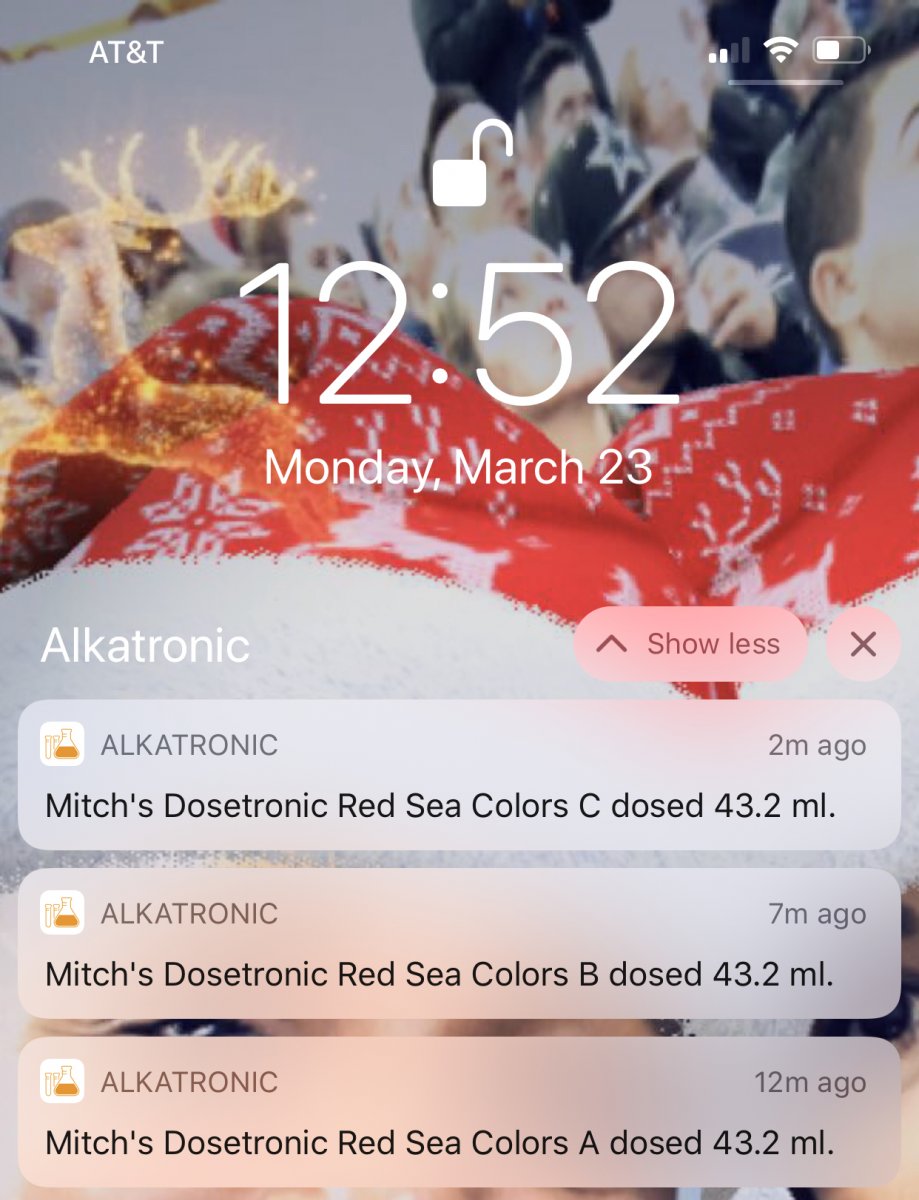 I thought to myself no way this unit just dump 43.2ml of each of my Red Sea program into my display. Check my level and YES IT DID!!!!! I immediately went to support through the FaceBook group. Was told that it was an internet glitch that caused the issue or after enabling Alkatronic mode that I needed to go into each channel and turn on/off Alkatronic mode for them.

That to me isn't acceptable functionality when you specifically have a toggle to activate Alktronic mode for the individual channels REGARDLESS of linking the unit to your Alkatronic.

Needless to say I immediately did a massive water change (planned on not doing any again so thankfully I had water already prepped and just need to add salt). Still need to see what happens with my system since I was only able to change 40 gallons of the 240 gallon system. Will likely have to do another water change.

My real frustration resides with the way that support tends to at time brush stuff under-the-rug and portray like the system isn't flawed. I had the same issue with them when I purchased the Alkatronic and they resolved those concerns mostly, and now I have the same concern with the Dosetronic. Maybe coming here to address the frustration of POTENTIALLY nuking my system using the flawed/buggy programming that they have with the unit will get them to see that there is a real issue with the communication between the Dosetronic/Alkatronic.

Here is the FaceBook conversation for those interested and considering this combo. BE WARNED. Unless they do some major modification to the coding to prevent this type of circumstance, I will never activate Alkatronic mode for the Dosetronic and likely will decide soon if it is even worth keep for the $600 that it cost. 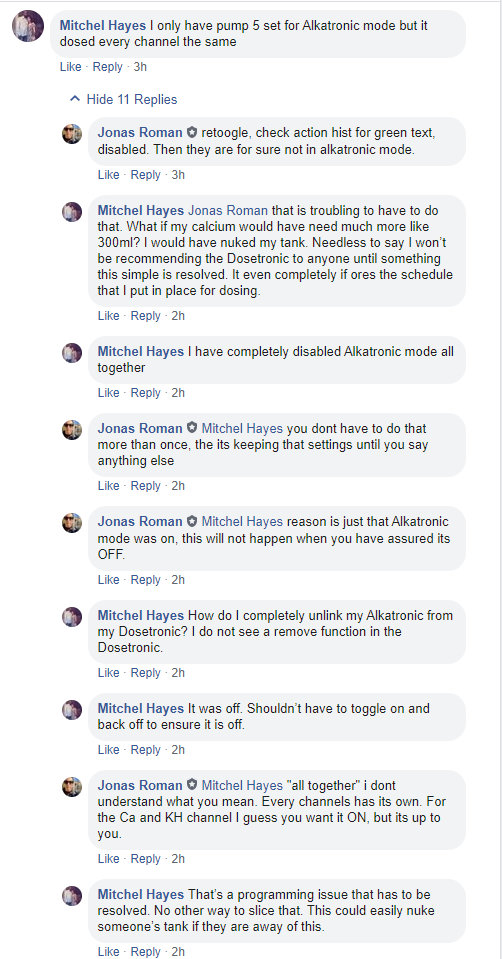 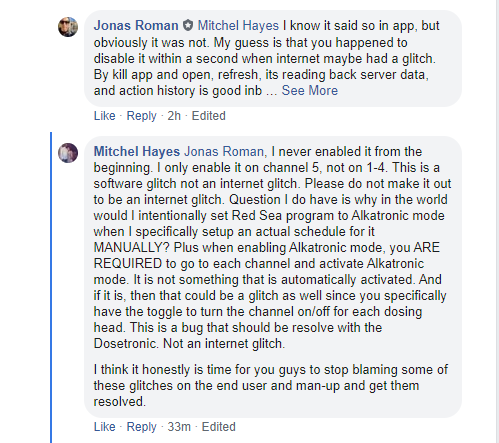 Decide for yourself about the unit, but I will not trust it to auto-correct from the Alkatronic.

The things I like is the build quality is really good for the unit, but the software glitches can/will be a deal breaker. I know stepper pumps are the best of the best, but they are only as good as the software controlling them. Maybe they will get their act together and stop focusing so much on the Mastertronic and resolving the issues that they have with their existing product line - Alkatronic/Dosetronic.

Rant over for now.

Just an update as to what is going on with this particular issue. Working with Focustronic support to determine the cause of the unit dosing channels 1-4 although they were disabled from dosing.

I am feeling better about the unit now than I was a few days ago. It is dosing to my schedule that I have entered for channels 1-4 without any concerns. Now we are working to determine why it dosed the amounts that it did when I activated Dostronic/Alkatronic mode.

Currently still have the mode deactivated on Calcium until I hear from support about what was the cause. Hopefully will have an answer soon cause the idea for my usage is to have the Alkatronic communicate to the Dosetronic to increase/decrease Calcium channel accordingly.