Tank looks great, just battled some Cyano myself. I put a tiger conch in there to help stir the sand up and man does he keep the sand clear.

AFR dosing seems to be stabilizing my Alk around ~8.5-9, 7mL/day (dosing each hour.) Monitoring Alk closely.

I'm going to the mattresses with this cyanobacteria. Blowing off/siphoning all I can easily get to every day. I WILL WIN THIS BATTLE. Also watching anything I can find about best strategies for combating it. Lots of suggestions on dosing other bacteria, so I've started dosing Microbacter7 again. Turning the skimmer off 4 hours a night to let the bacteria grow.

Phosphates are still reading 0 in my daily tests, so I started dosing 1-2mL of NeoPhos daily. I don't want to feed reef chili every single day as that seems to be fueling nuisance GHA in a few spots, and obviously the cyano. I know the algae/bacteria are taking up phosphates, so it's there, and coral growth is going well. I'll just keep on keeping on.

I've added three new corals from my LFS. I picked up some Blue Eyed Blondie Zoas (hate the actual name for these, I refuse to use it), a Forest Fire Digitata 1" frag, and an orange Setosa 1" frag. More SPS and more red/orange!

I really really really want my clowns to be hosted by my rainbow BTA. I've been playing a video for about 8hrs a day on the glass for them. Some days the female will rub up against the BTA's stalk, and nibble on the tentacles, but that's about it - no real hosting yet. I'm being as patient and anti-interventionist as possible. 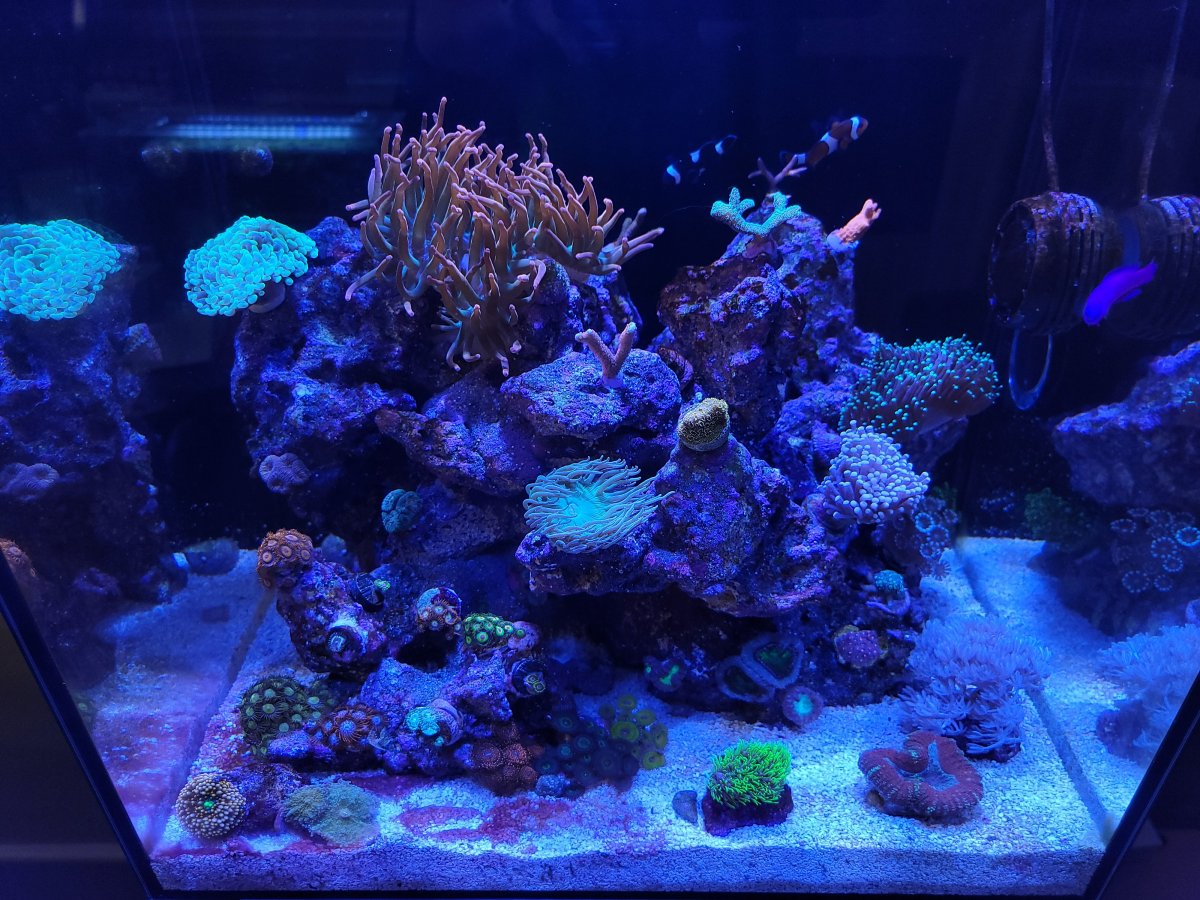 You got a hungry tank! Still surprised you're already at 7ml, but then again you may have upwards of 10g of total water volume compared to me. Glad it's stabilizing. Is CA and MAG balancing out too?

I couldn't explain to you exactly why, but I feel like good fresh phyto and my Oxydator has helped keep cyano and other algae in check.

You're doing a great job with your colors! I didn't realize until it was too late that I had way too much green.