My Reefer 425 XL and FishRoom update

para306 said:
Well its nearly done! Started the fishless cycle two days ago with Dr. Tims One and Only and his ammonia supplement. The room came out awesome and the tank looks great IMO. Everything took 5X longer than expected. I have a few things left like plumbing the manifold for media reactors and UV on return pump 2, installing flow meters on return pumps, and some cord management in the sump area. Also plan on setting up automatic water change system and auto dose of the big three (in a few months obviously).

I have to say my favorite part so far was probably the aquascape. 100lbs of Dry Reef Saver Rock and 60lbs of AragAlive special grain sand. The sand seems to stay put pretty well but there are definitely some dunes in the tank which in my opinion look pretty great. What do you guys and gals think? We will see how it works out while im dialing the two OctoPulse 4s in.

I opted to go with 2 Varios 4 return pumps, each on its own circuit in case GFCI trips. The main one having its own Icecap battery backup. The skimmer I chose was a Reef Octopus Regal 200-INT, which is probably over kill but I plan on expanding the system over the next year or so.

Two Finnex 300watt heaters are on two different circuits, one on an inkbird and the other connected to an EB8 controlled by the APEX. The one on the inkbird only tuns on if the other fails to keep the temp above 77.8F. Its been doing well so far maintaing 78.0 without the second heater kicking on.

I opted for a light I could later expand for SPS. I went with the Reefbrite XHO 5 strip Kit (3 Actinic and 2 50/50) 48” light. I also opted for the bluetooth controller. After many reviews and research this light provides plenty of available par and spectum while I establish my tank and I can add Kessil A360xs later. I think it lights the tank beautifully, the limited time I have see it on due to cycling, LOL

The RO/DI system is a 6 stage BRS Plus with water saver 2 membrane system. I had to add a booster pump as my water pressure was to low. I have two 30gallon holding tanks, one for RO water and the other for salt. APEX ATK works great and the AWC with DOS is still to come but should be simple to setup (famous last words). I can make 30gallons of water in about four hours. Its been working well so far. Need to install the optical sensors in the barrels still.

Anyways, thats about it for now, update in a few weeks. Thanks for reading and please post with comments, suggestions, criticisms and concerns.

P.S. Im pretty disappointed with the lack of Saltwater enthusiasts in the NH area. Anyone know of any reef clubs in the Raymond Plaistow area of NH? I would love to be part of a local club. 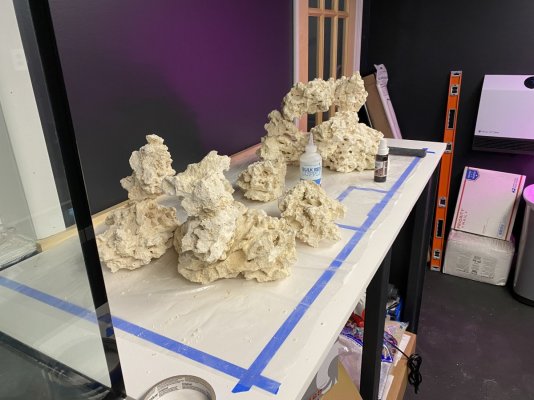 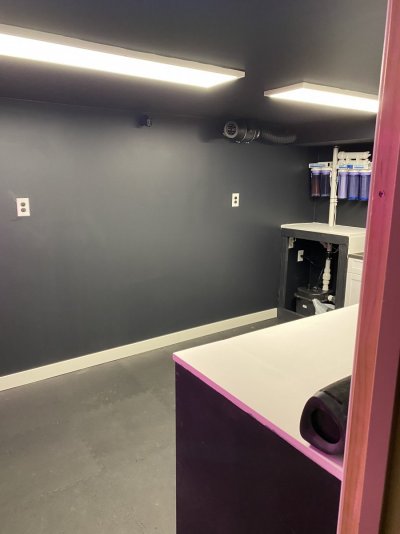 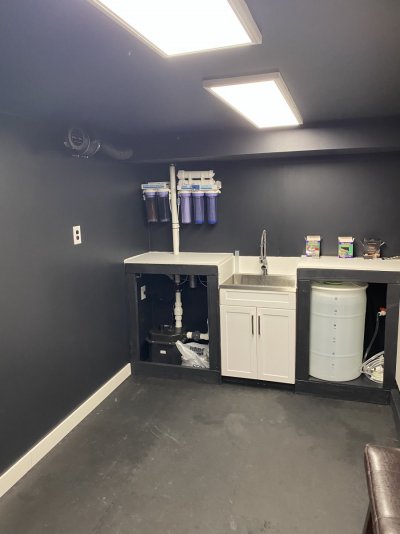 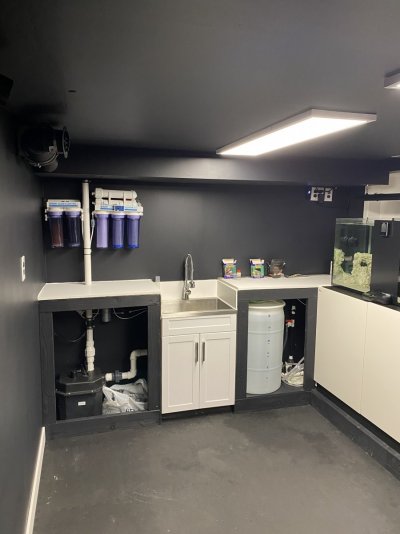 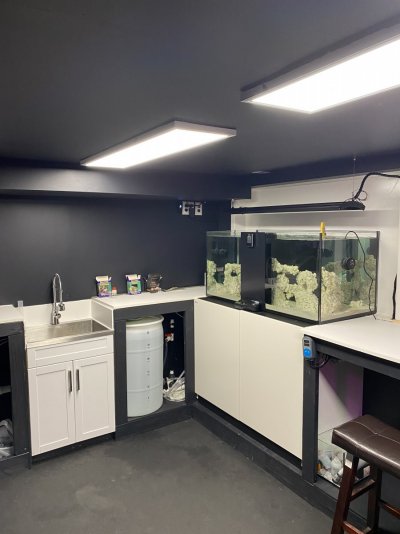 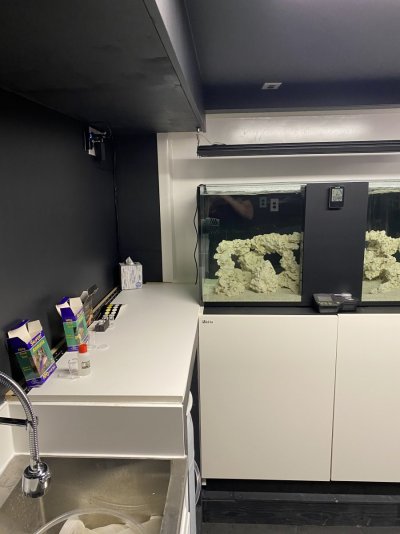 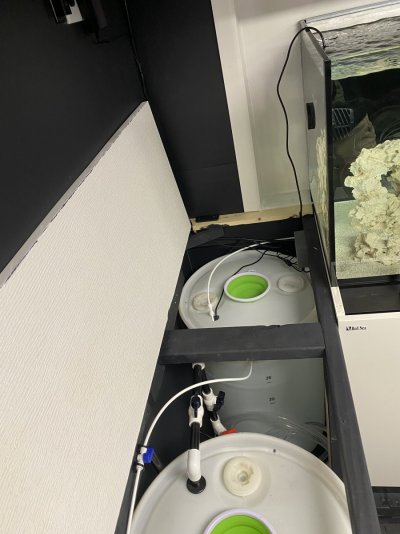 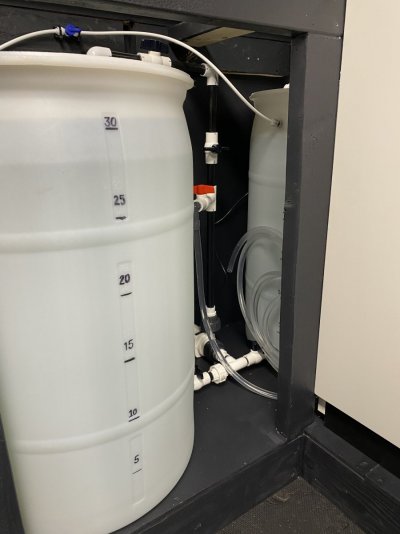 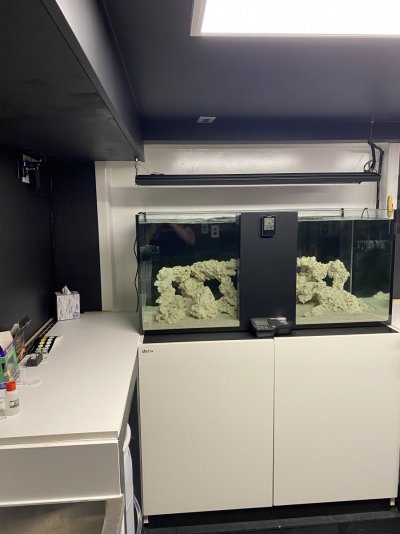 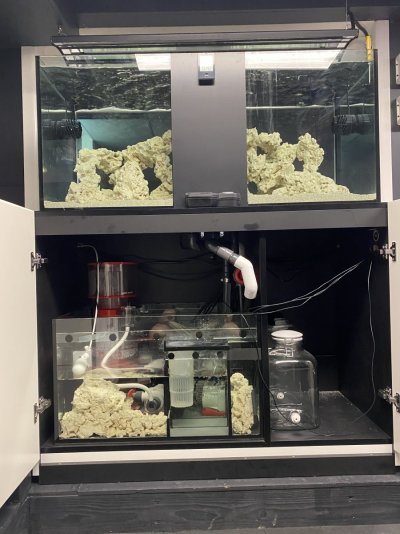 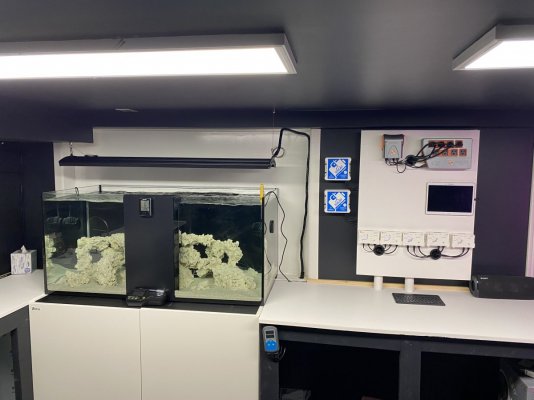 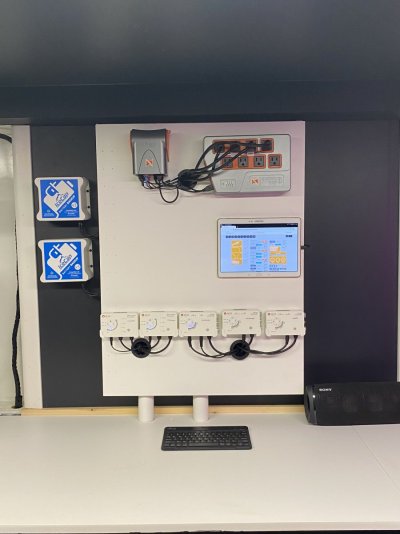 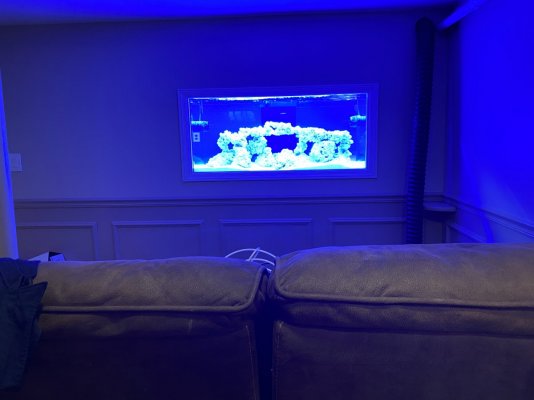 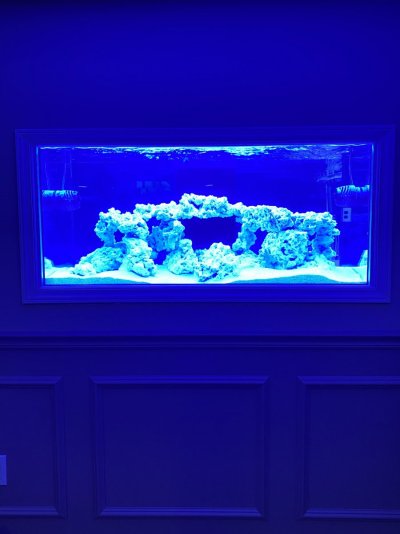 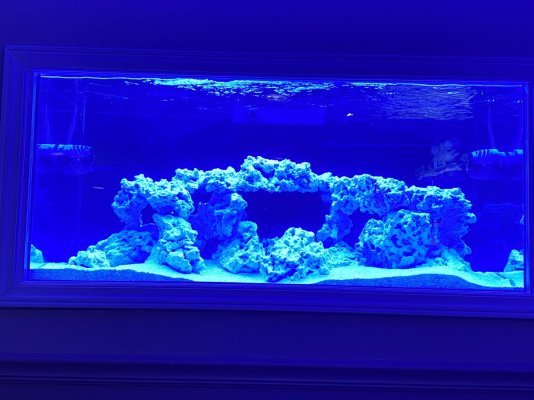 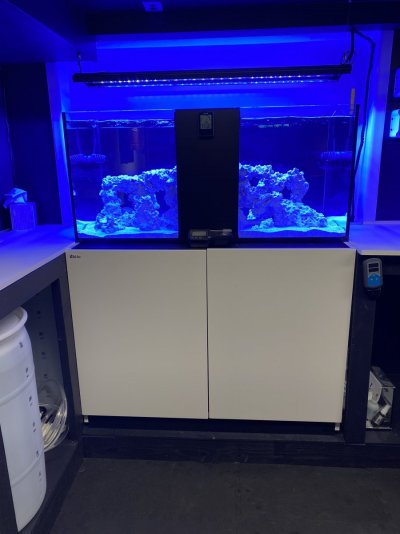 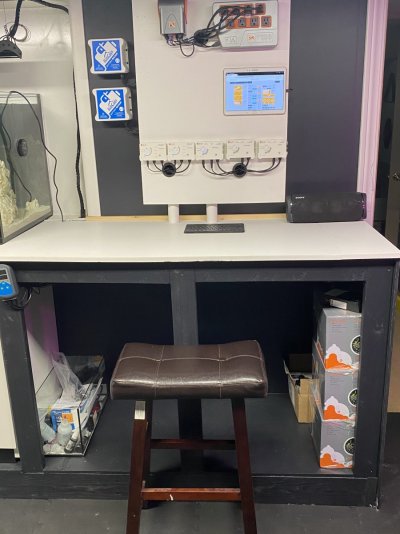 Thats all for now!

That’s a heck of a fish room!!! Nicely done


I also learned from your post that I can use icecap backups for my Varios pumps… Guess I’m spending more money now. Lol

Very nice setup, wish I had a fish room!
OP

Thanks for the compliments!

The Icecap V2’s plug right in to the inverter off the Varios pumps and Power heads wire. The instructions were easy to follow and there is plenty of wire.
B

para306 said:
Thanks for the compliments!

The Icecap V2’s plug right in to the inverter off the Varios pumps and Power heads wire. The instructions were easy to follow and there is plenty of wire.
Click to expand...

Great looking fish room. I'm about to build one in a new house & had a couple questions.
1) what do you use to black out the back side of your tank, while viewing from the display side?
2) what kind of ventilation/exhaust fans/humidity control do you have set up in the room. The room I am taking has an a/c vent but I need to add at the very least an exhaust fan to pull the humid air out.

Build Thread Update 2 for the Fishroom and Reefer 425 XL

Build Thread Update on the fishroom for the Reefer XL 425