Saltwater tanks are new to me. I have had plenty of freshwater tanks growing up but never a saltwater tank. I always wanted one as a kid but could never afford one. Fast forward about 20 years and I have a son who is an ocean and fish encyclopedia. He has hounded me for years to get a saltwater tank and has been saving his money for one. We were watching and waiting for a tank to go on sell and found a used 60 gallon tank on Craigslist that was being sold for $200. When we went to pick it up the person selling it said they were moving and we ended up with all of the equipment, rock, sand, salt, fish food, and other stuff for not only the 60 gallon, but also a 40, 25, 20, and a 10 gallon tanks. needless to say he was ecstatic. We have donated most of the smaller tanks to friends but have kept the 60 and 20 gallon tanks. So you can kind of say this is my sons tank.

The 20 gallon is sitting empty but will become a small clownfish and anemone tank for my wife for her elementary school class sometime in the future. Any advice here would be great.

So the stats currently are.

The picture is not very good and was taken during a dyno outbreak. Which has now cleared up. Currently starting to see algae forming. 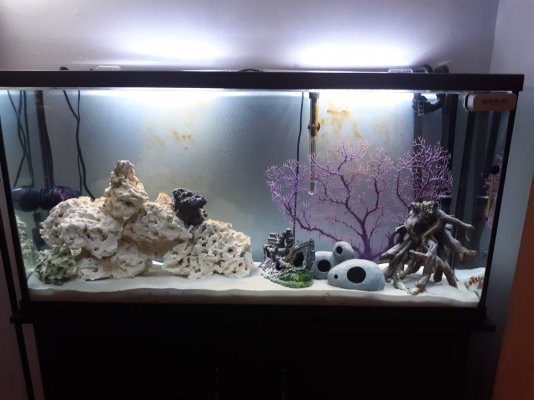 Welcome! Did the livestock come with the tank? How long has it been set up?
OP

hllb said:
Welcome! Did the livestock come with the tank? How long has it been set up?
Click to expand...

The live stock is all new and the tank has been running about 3 months. So far everything seems to be going good.