As we're being encouraged to bare all with our builds...here goes. I've been taking photos to document the tanks evolution.

I have a love of nano tanks, currently own two active freshwater nanos and one 130L freshwater tank. I thought I'd start with a small reef tank before committing to a large one to see if I was up to the challenge! I've been a aquarist long enough to know I would need to go slow and build up the tank so I ordered som Argonite sand and I found a used Petworx Nano 45 for what I thought was a decent price as it came with a few extras...heater, floating hydrometer, substrate, etc. Found the substrate unusable and broke the hydrometer! But I digress.

There's a local marine aquarium not far from me so after watching lots of videos and reading everything I could find about starting a marine tank and with my head stuffed with things I couldn't possibly yet understand, I headed for the store for the first item...rock. With the help of the oh so patient shop person, I made my second major decision...the rock formation that would house my as yet unbought corals. The tank is tall rather than wide so up seemed to be a good option. 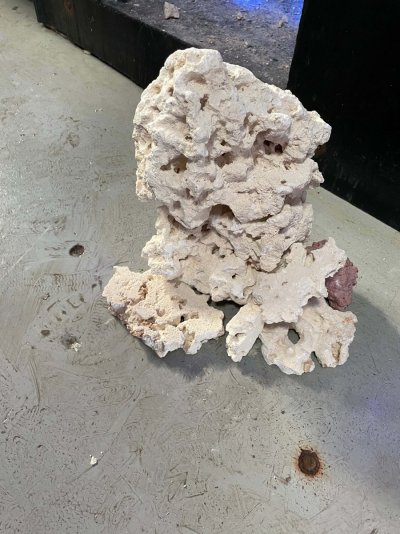 Of course, when I got it home and began the (messy, difficult, swear worthy) process of constructing and mortaring it all together, it looked a little different but eventually ended up in the tank where it does (barely) fit. Add sand, salt water (painstakingly mixed), a heater, a wavemaker, a decent light (I replaced the original light) and presto! A (almost) marine tank. Drop in some bacteria drops, wait a few weeks for the tank to cycle and get ready for the next step! Coral! Right? 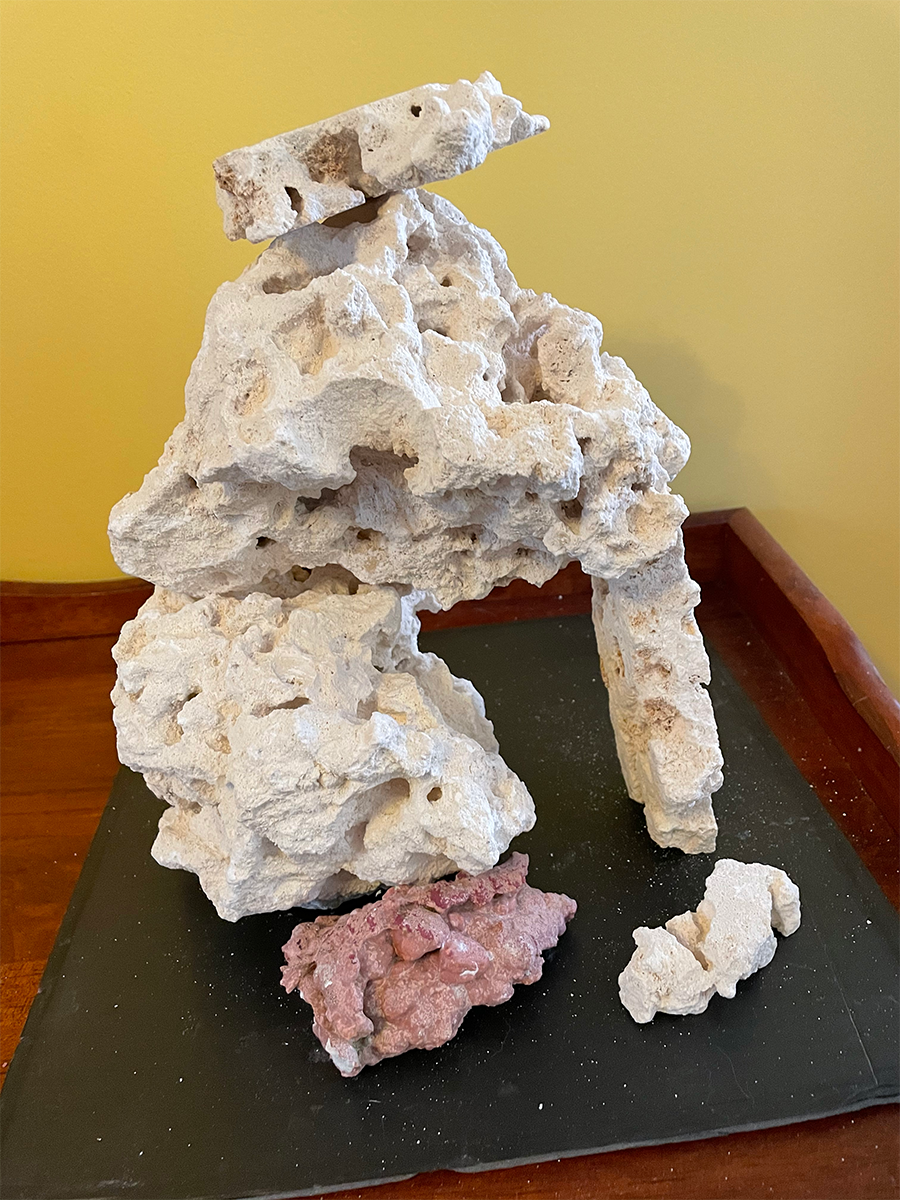 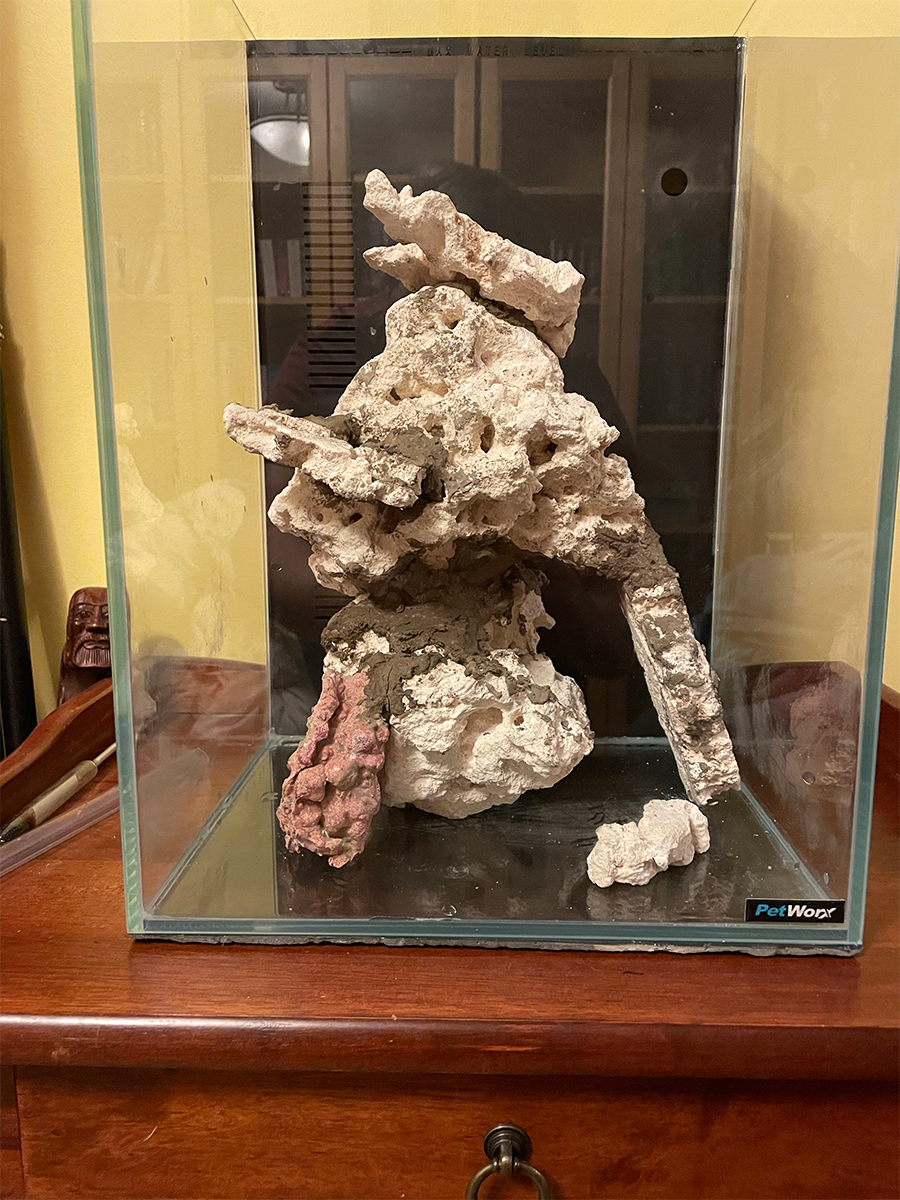 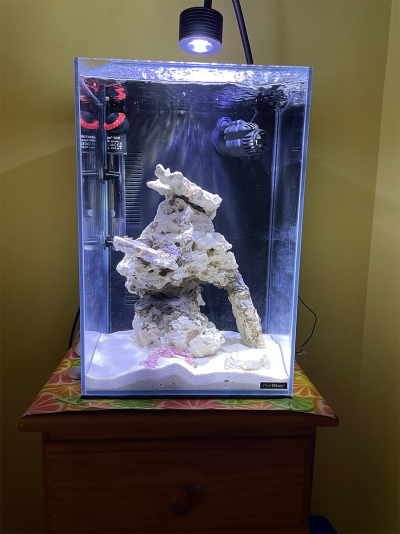 Once the nitrites, nitrates and ammonia are at the right levels, back to my friendly aquarium store for advice on the brand new spanking corals I'm going to bring home...anddddd...I'm advised to start with some fish. No corals. But pretty fish! So home come Bonnie and Clyde, a bonded pair of clownfish which starts a new learning curve. Of course, as soon as I add them, within a week I'm contenting with some nasty looking algae of the reddish variety. Back to the store...and this time I'm home with more new denizens (still no coral), the snail clean up crew. 6 turbo snails and one monster that I have no idea what he is but he looks awesome. I've also noticed some protein on the top of my water, more than I like so I install an Aqua One Nano Skimmer which works a treat. 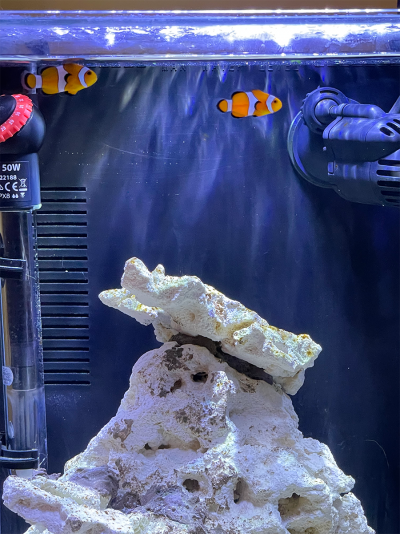 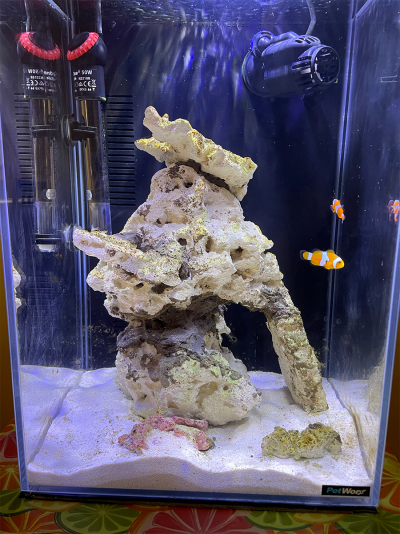 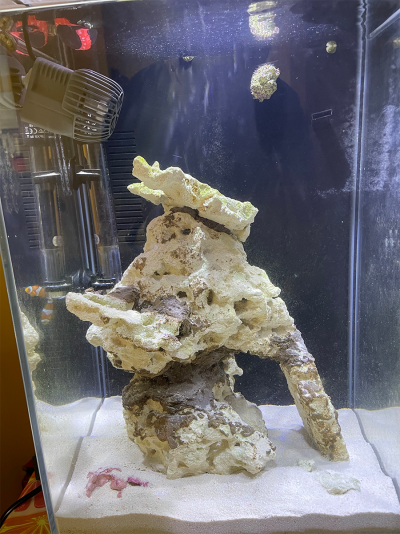 Okay, let the tank settle in some more with the new guys and back I go to the store. This time it's going to be corals for sure! And...bang on, home comes Froggy the Frogspawn coral, the first fellow settle into the environment I've been painstakingly building for him (and others!). Out for crazy glue, and then it's really crazy as I try and glue Froggy to his new home, getting way too much glue on him, the rock and of course, my fingers. I only stuck two together and then only a little. It hardly hurt at all to pull them apart! Honestly! 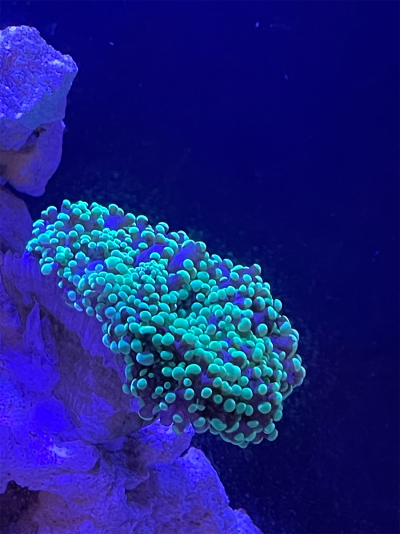 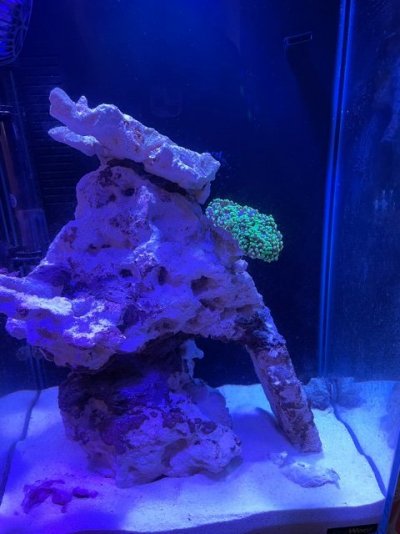 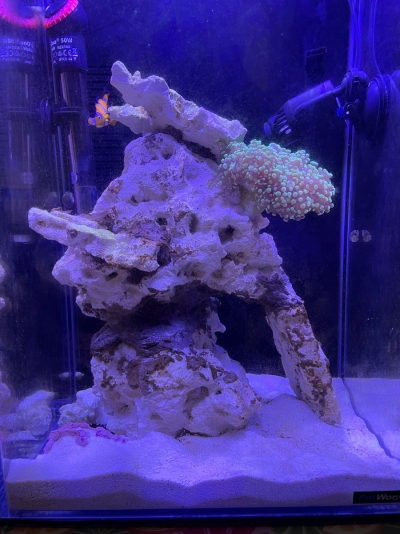 Now we're rolling! I figure I'll wait a couple of weeks, maybe three, to be sure I can be a good coral mummy and keep Froggy alive and happy, then I'll trot back for more.

Of course I didn't realise how stressful getting your first coral is. It's a lot like having a baby. I must of checked on Froggy 100 times a day. I worried every time a tentacle dropped. Or he didn't swell up as much. I changed his flow until I felt he was totally happy. I decided the light wasn't good enough, did heaps of research and got a new one with more controls through an app where I could set the time and lighting parameters more finely. I fussed and tried not to fuss and asked my good friend in QLD when one stops fussing and he's like...never. Great.

I'm thinking, okay, this is it, next weekend I'm doing it, I'm getting new corals. It's time to start bumping up the tank since I haven't (yet) killed the one I have.

Then, wham, into full lockdown due to Covid and for the next 4 months, Froggy is an only child. The tank went into full algae bloom mode and I struggled to keep everything stable. At one point I thought about giving it up but where would Bonnie and Clyde and Froggy go? We were in lockdown! I couldn't even take them back!

We made it through, all of us, although I made a few very embaressing mistakes that poor Froggy suffered through (the clowns seem to be able to handle anything) and I lost a couple of the snails, although not Mr T as we've taken to calling him. As soon as the restrictions on travel lifted I headed straight for the aquarium store. This time a little better prepared and ready to make up my own mind on what or who I would be taking home.

I bought six new corals (and ended up with seven due to a hitchhiker as well as a small filter crab). The tank began to improve within days. Flora the Flower Pot coral, Monti the montipora, the Stars who came with Monti, Zeds 1, 2 and 3 (zoas) and The Thing, my fungia whom I am enthralled with. 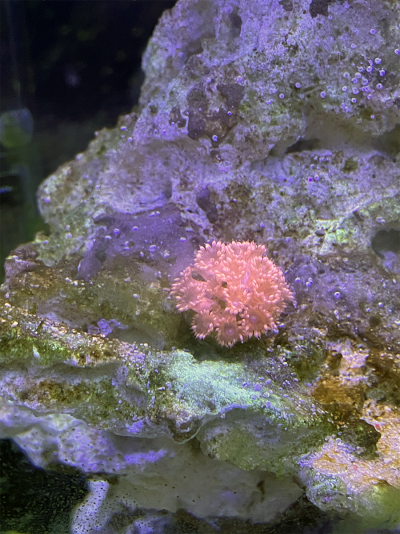 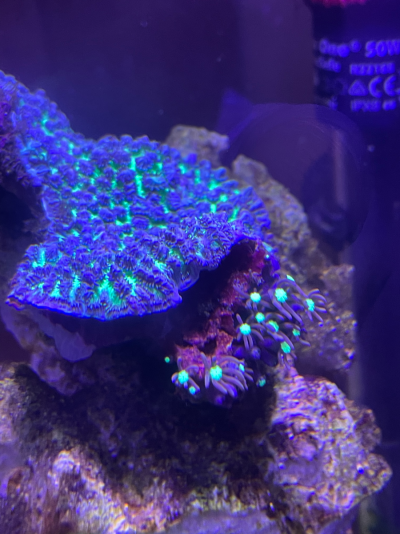 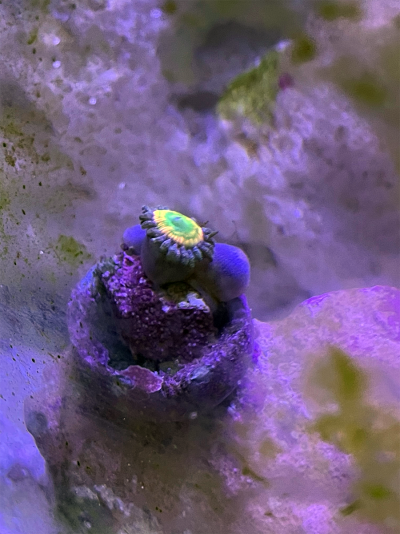 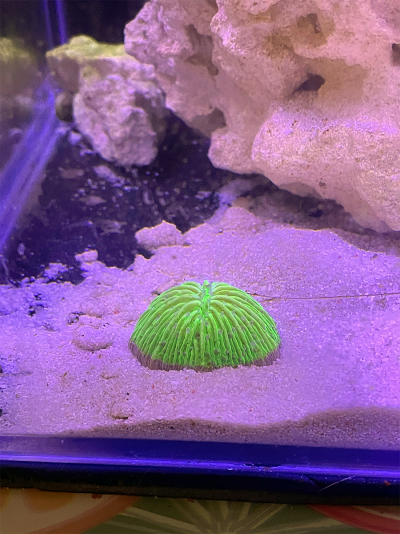 I was still struggling with a bit of algae so last weekend I added some nassarius snails which are just the cutest little dickens and lo and behold! Miracles happened! The algae plague has been rapidly disappearing. However this means less nutrients in the water so it's time to go back to the shop and get some Nano Reef Roids for Flora and the Thing. I decided to see if I could manage to feed them some brine shrimp without totally messing it up and both of them grabbed right onto those shrimp who disappeared in no time. Which, when I looked it up to see what Flora the Flower Pot would like to eat definitely did not include brine shrimp! I can only suppose that she was so hungry she'd eat anything. But she definitely ate them.

And that brings me up to date on my tank. The hardest part has actually been the wave maker. I've tried 4 different ones and I'm still not entirely satisfied but the corals are all doing well so I'm going to focus now on learning coral feeding. I want them to thrive but I don't actually want them to grow too fast as I don't want to exchange the tank for a big one for some years yet. We'll see how it goes and I hope you've enjoyed the story. 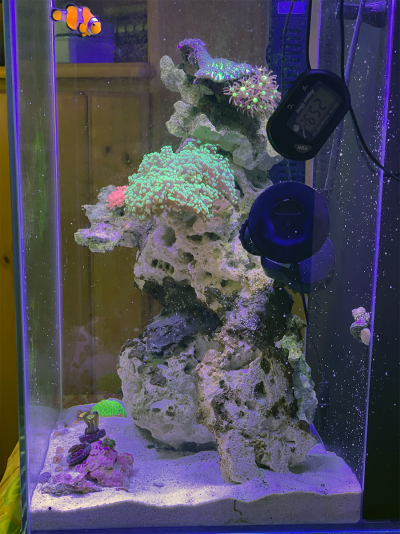 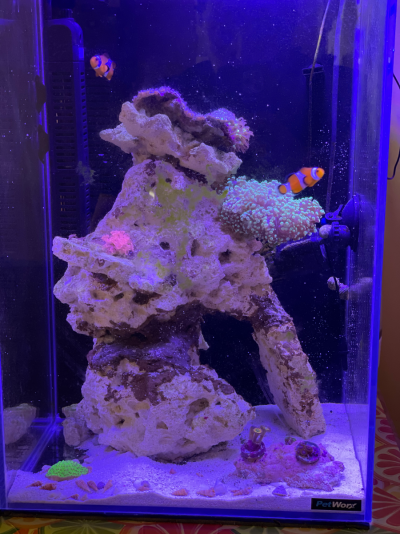 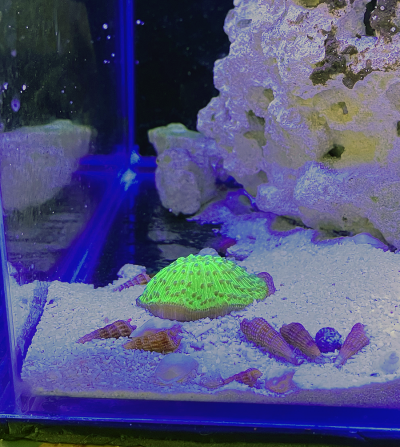 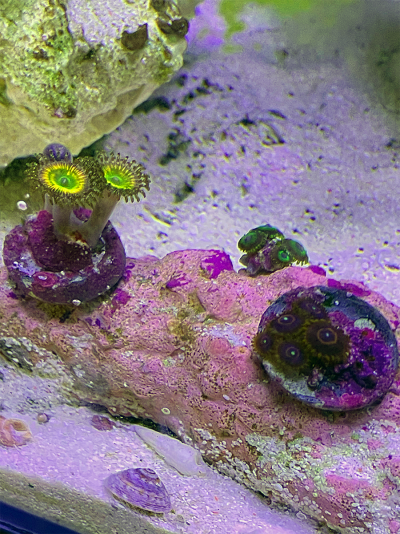 Regards wave makers, take a look at the Nero 3 (or 5 if you think you will upgrade or have a larger application with an existing tank).
OP

Thanks for that! I've gone through 4 different wave makers. The current one isn't my favorite, which developed problems and I had to replace with a larger one that I had tried earlier. One gave so little flow it was useless and the first one I bought was way too big and I now use to mix my saltwater. The Nero looks like it might be just the ticket. I hadn't run across that one before.

Wednesday at 7:52 AM
Obsessed with fish