Ok so newb mistake I made, broke one of the rules. I have a 30 gal sps system (~26-27 gals) my system had been stable for the past 6 mos (big 5 alk ~9.3, ca ~440s, mg~1500, po4 ~ .05, no3 ~10 using RS PRO salt) I added 15 small frags and bigger frags (5 almost colony size) in a span of 3 -4 months slowly which probably was still too fast (now I know.) So here’s the kicker, I was checking alk once a month with weekly water changes ~10-20% depending on nutrients everything remained stable then I dosed recommended dosage of brightwells reef snow for ~25 gals to feed some sponges I have in there and to see if any effect on my sps. This is where things went downhill. Since I was only checking alk once per month I failed to notice the uptake of alk had increased dramatically and after dosing reef snow the next day I tested. Alk had gone from 9.2 ish to 7.7 in I don’t know how many days. Major alk swing regardless. Before this I had ordered some frags in the mail which quite a few had ended up bleaching over night(which I’m thinking brought the infection in) in my tank do to stress from shipping and heat (west Texas) I tested all my parameters the day after reef snow do to noticing some bleaching on my pocillopora colony on the shaded part… that’s when I found out my ca had gone to 510s and my alk to high 7s. I’m slowly bringing down calcium (currently high 470s) and raising alk (currently low 8s) via kalk but switching to soda ash ( to help boost ph currently 7.7-8 as well, raise alk and keep calcium from dropping too fast along w weekly 20% WC.) I started noticing a major bleaching event especially on my larger frags. I took immediate action and for the past week have dipped my coral in seachem iodine at full concentration for 30 mins 3 times already and have noticed the bleaching has slowed but not ceased. Here are my questions for the experts:

1. I’m thinking of an erythromycin/prazi/ iodine dip for 30 mins, anyone had success using such method?

2: I’m starting to dose via pump soda ash in the next couple of weeks I’m currently using the kalk/ ato method, should I cut the kalk (using 1/3 tsp/ gal currently) outright as soon as I start soda ash? Calcium sits in the high 470s alk in the low 8s hoping this will help bring down calcium

3. anything else besides fragging my bigger coral I can do to save them? Any success in dealing with a situation like mine is greatly appreciated

***I understand stability is key and that’s what I’m shooting for but as far as saving my coral any help or advice is greatly appreciated. Currently running UV and skimmer 24/7. TIA 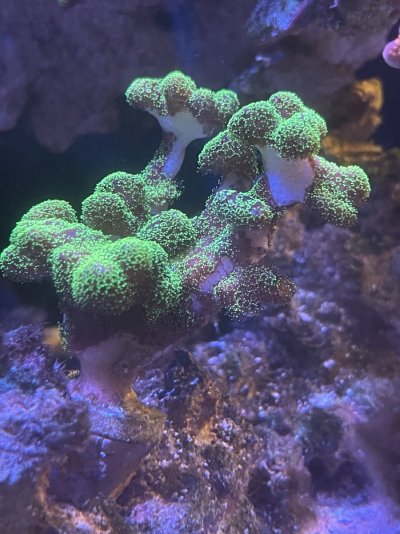 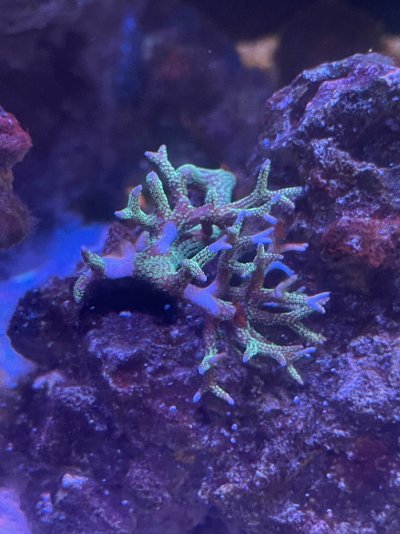 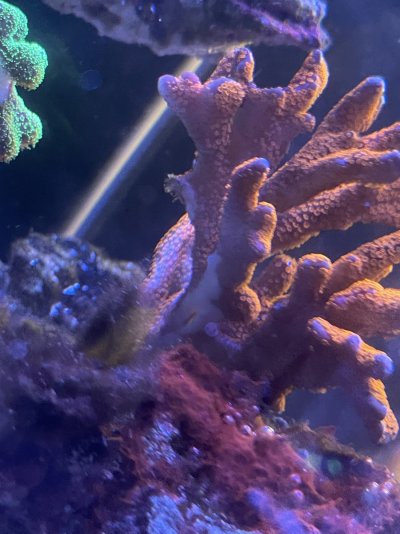 Remove coral from main tank . Dip with prime coral stop rtn . And place in quarantine. Then after your sure you’ve stopped the progression you could either frag it cutting off the bald areas or add live zooxanthellae to bring back the bleached areas which I’ve had limited success . It’s a 50/50 chance that the zooxanthellae will find its way back into the coral as far as I’m concerned but others have claimed a much higher success rate . Hope that helps
Last edited: Sep 2, 2022
OP

CoralB said:
Remove coral from main tank . Dip with prime coral stop rtn . And place in quarantine. Then after your sure you’ve stopped the progression you could either frag it cutting off the bald areas or add live zooxanthellae to bring back the bleached areas which I’ve had limited success . It’s a 50/50 chance that the zooxanthellae will find its way back into the coral as far as I’m concerned but otters have claimed a much higher success rate . Hope that helps
Click to expand...

nomad6 said:
Thanks for your response I currently do not have a qt (no light) another mistake but I’ll look into the prime coral
Click to expand...

In that case dip it in the prime coral stop , follow instructions then I would have another container of your tank water to rinse it good before putting it back in the tank . And if you wish to treat the whole tank with live zooxanthellae just shut off the wave makers and pumps then with a pipette blow the zooxanthellae on the coral and in the tank . Let it sit for at least 45 min before you turn the pumps back on . It usually comes with instructions as well but you also want to turn off UV and skimmer for a few hours as well.. also hold off changing your products for now and don’t worry about adjusting and chasing your ph for now as well . Get your parameters back into line gradually and concentrate on stability until you notice improvements
Last edited: Sep 2, 2022
S

That’s STN not bleaching and is probably infectious rather than due to your change in alkalinity. Alkalinity of 7.7 is perfectly reasonable and I wouldn’t worry about it. Elevated calcium also is unlikely to cause a problem as long as it is under 600. Your phosphate is at the bottom of the range but is viable.

I personally use either potassium based dips (Reef Primer or just KCL) or antibiotic based dips in this setting, but YMMV.
Last edited: Sep 3, 2022