mrlavalamp said:
Regarding your mandarin. If you want to move along the pods process, look into culturing your own phyto and pods at home. It's REALLY easy and will save you a boatload. One thing I don't see mentioned often is that my home made phyto is more concentrated then Mercers/AlgaeBarn or any other commercial product I have bought. The only exception was the starter culture I used, I picked that up off a user here and it was very dense.
Click to expand...

I have been looking into it. I'll probably just start with easy stuff and buy the premade phyto for now, but I'll learn eventually.

I still need a fuge light and some more rubble I think. I'm happy with my rockwork, but it wasn't as much "volume" as I thought it was gonna be. I'd like a little bit more just for my sump.

I still need do some research on fuges and macroalgae. Not 100% sure if i just want rubble or macroalgae or some weird combination of both.

Location
hiding under a rock, NV

His phyto is the best i've used.
OP 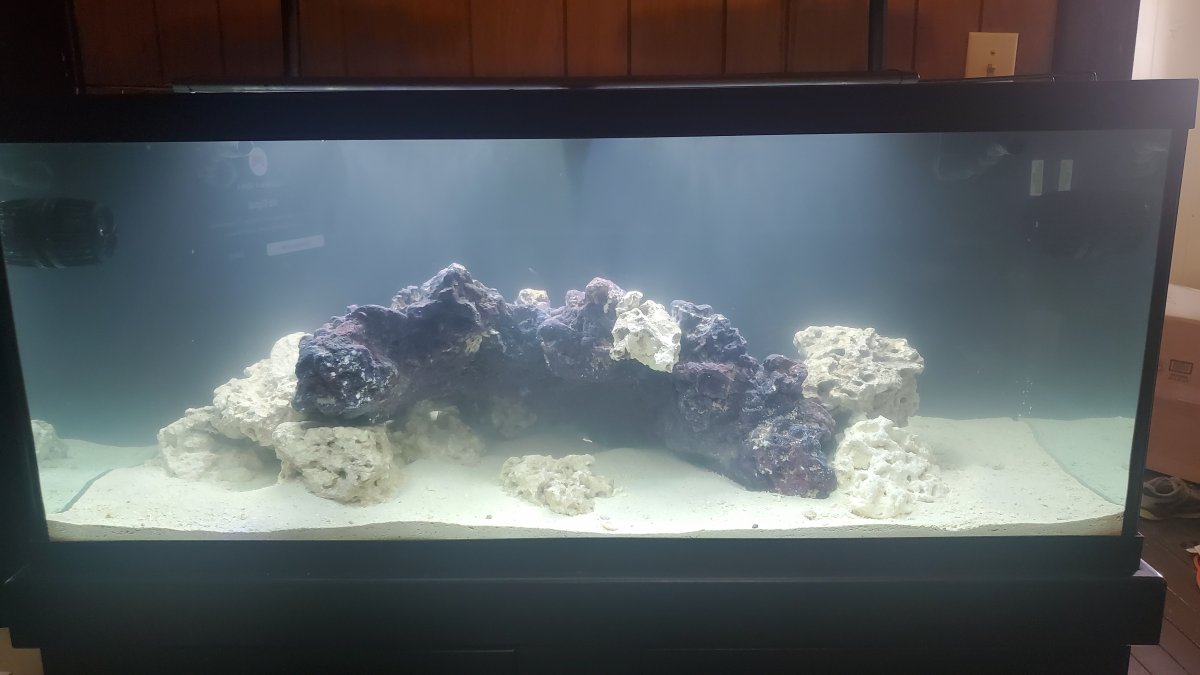 Bacteria and ammonia just went into the tank. I will test in an hour or so. While playing earlier, I was able to get plumbing nearly silent, so I'm stoked about that.

I do wonder about my returns though. Per suggestions, I place two gate valve on each return line to control flow. But I am getting a soft gurgle from the return lines. If I close my gate valves down, the gurgle goes away. Is this a sign that my return pump is too small?

As it is right now, with nothing in the tank, it's not a worry, but once stuff starts going in, I'll be a worry-wort, so just planning ahead!

Bacteria and ammonia just went into the tank. I will test in an hour or so. While playing earlier, I was able to get plumbing nearly silent, so I'm stoked about that.

I do wonder about my returns though. Per suggestions, I place two gate valve on each return line to control flow. But I am getting a soft gurgle from the return lines. If I close my gate valves down, the gurgle goes away. Is this a sign that my return pump is too small?

As it is right now, with nothing in the tank, it's not a worry, but once stuff starts going in, I'll be a worry-wort, so just planning ahead

Also, will running the cheapo LED bar that came with tank cause issues during cycle? I know main lights might grow algae, but i wanna see my tabk! LOL

Location
hiding under a rock, NV

Personally I don't put valves between return pump and the outlets in the display. Gate valves are expensive and they shouldn't be needed in this arrangement. Throttling the flow by closing a valve on the pump discharge will wear it out faster. The more closed the worse that wear factor will be.

Run the low power light if you like. I would simply leave it off and only turn it on while you are looking at it.

The tank does not need light during the cycle, but it won't hurt it either. ANY light, even low power, will feed algae and help it grow though. 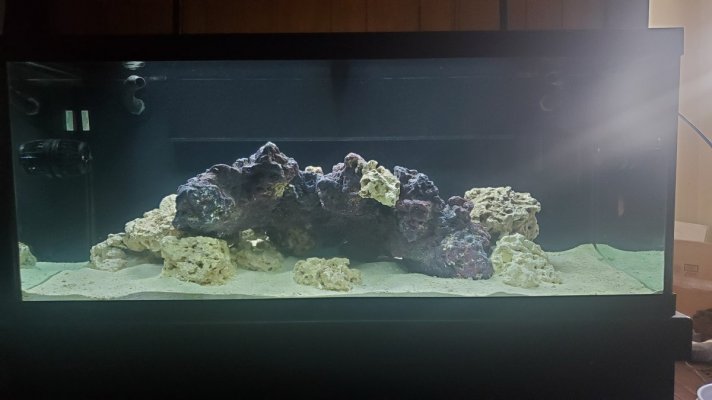 Ammonia still sky high, but its just a matter of letting the tank do its thing, I think. May look into another bottle of bacteria, or maybe a piece of live rock from the store.

Still learning the skimmer and trying to dial it in. I know it takes time being new and all. Head will be super low, and so I leave it, come back to check and cup is full of SW. Lol so just trying not to mess with it and let it run.

Todo List:
Controller - Looking at a controller, maybe. More so just for monitoring and emergency shut-offs. At the very least I need something for temp. I don't really like where my heater is compared to spots for my cheap probe.
Water mixing - right Now I'm just making water as needed, but once I get going I know I'll need some more on hand. Found 2 nice 35g horizontal tanks. Am thinking about upgrading return pump and reusing pump I have now. Not sure if I can convert a varios2 to external pump?
QT/hospital tank - I've never had a good qt process when i kept freshwater fish, and have lost tanks to ich before. I am going to try and be better about it on this tank. Can I reuse filters i use in qt, or since it gets copper treated, just dump them and buy new ones? Also no activated carbon for QT in primary circulation filter, right? Only as I need to add it?
OP

Not a whole lot new. So just sharing test results. Got some new Salifert/Hannah test kits so we will see.

I have a PO4 and dKH tester as well but didn't think it was worth testing atm.

Overall, the variance in NH3 is always worrisome, but it seems to be the norm with API kits. In either case, the presence of NO3 means my cycle is finally starting. I will probably forgo the API kits moving forward as I really only wanted them for the cycle, plus they are older kits nearing their expiration dates anyways.

Todo List:
Water mixing - cycle finishing up. Need to work on mixing since I can't mix in tank anymore. Probably going to order a pump and heater and just do that for now. I have a brute can for water, and two 35g storage tanks for my actual water station. Just need some time to work on it.
QT/Hospital - last little bit still in transit. Will setup 10g QT tank once all is good to go. Waiting on fresh SW to do a WC with, so everything is kind of clogged there.
Return pump - with my need for a pump for SW station, I'm thinking of upgrading return pump to varios4 and using varios2 for mixing station. Thoughts? I van just grab a cheapo water pump if I need to put on hold for a bit.
ATO - I already don't like my water system as the house I'm in is kind of 'blegh.' Hopefully once I get water station set up it'll be better. With the mixing station going up, I also plan on an ATO to help alleviate the evaporation.
Controller - Need to find a happy system for my temperature. I don't like the fluctuation, though I think most of it is due to poor housing insulation and good ol' midwest weather. May look into just a temperature controller for now, but still eyeing an Apex system or similar for monitoring.

So, got a week or so until tank is good to go for fish, but still a few months until fishies because of QT. This is alreafy testing my patience! But I feel like I'm succeeding as I'm not in that much of a hurry to get to the next spot.