New build in the works

So, I went to my LFS and got to know a really cool lady who unfortunately is moving on with her life outside of working at a fish store. But anyways we were talking and I was explaining the type of tank system I wanted to build. I was thinking a bookshelf with multi differing levels and sized cubbies. Then randomly add a few 10 gallon tanks where I can plumb them all down to one sump.
She told me to to hit up petco for their dollar per gallon sale and said to pick up a few extra tanks just in case they crack while drilling. She also told me that I could take the braces off the aqueous to make them rimless(got one down just need to clean up the excess silicone). So I picked up 10x 10 gallons and am starting the prepping for my build over the next few months.
Any info on multi-looped tanks with 1 sump would be awesome. The idea is to build a couple of great set ups for 5-6 pairs of high end clownfish which I will start breeding a little later on and then sell to my local reefers and then extra to my LFS because they have to order so far away and shipping is nuts.

anyways here is to the start of my new build! 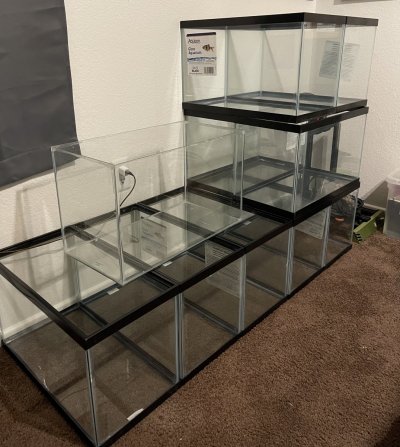 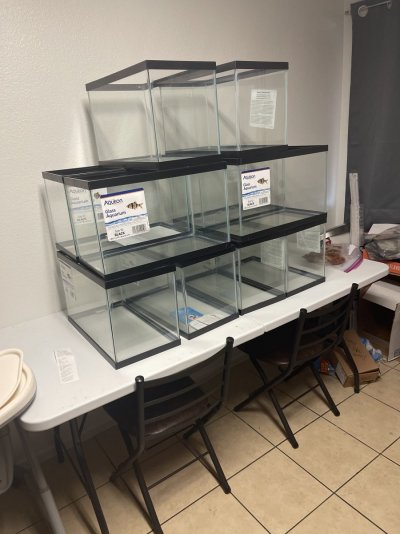 Get a nice bookcase/stand built that can house the sump in the bottom.
OP

blaxsun said:
Get a nice bookcase/stand built that can house the sump in the bottom.
Click to expand...

That is the plan. Haven’t decided on a style yet for the bookshelf design but think I am going to do open boxy looking cubbies and frame in the tanks with swinging hinges to get into the top of the tanks. And sump in bottom but haven’t decided how big/what I will need in There yet.

Are you sure those tanks can be without the trim? The glass on Aqueon tanks are thin. Not too much area for the silicone to hold the panels together without the trim. Hate to see those tank(s) start to leak on you or blow a panel.
OP

fishface NJ said:
Are you sure those tanks can be without the trim? The glass on Aqueon tanks are thin. Not too much area for the silicone to hold the panels together without the trim. Hate to see those tank(s) start to leak on you or blow a panel.
Click to expand...

I was doing some research and I wanted to test it out on one. I have one apart and am going to put it thru a stress test tomorrow when I have time.

normally 10 gallons aren’t heavy enough and don’t have nearly the amount of pressure to do that, but again it’s all dependent on the glass and how well it’s put together. LE corals and discount aquariums (my LFS) both said they would be fine and math wise it checked out now for the test and we will be off to the races.

The stacked 90's in wall build