Nearly four years ago we had a plumbing accident here at home, and, because there was no longer space to house my 55 gallon reef aquarium (8 years old)...

... I gave the inhabitants to an lfs and we broke down the tank. I had elevenish years of reefkeeping experience, and thought either I would pursue other hobbies or have a freshwater planted aquarium after we renovated the house. We moved things around as needed, and the insurance clean-up crew came in and did the cleanup. Hubby decided we need to renovate the house in general (yay!), and then he remembered he wasn't retired yet and was too busy. Sigh.

So, this year, while recovering from knee replacement surgery, I whiled away some time watching YouTube aquarists, initially freshwater aquascaping and such. Then, for the fun of it, I watched some reef hobbyists as well, and then I stumbled across a few websites advertising fresh premium Gulf live rock, shipped to your door submerged in ocean water. That was about two weeks ago, and last week I made the final decision to go ahead and do it. I already had a Fiji Cube AIO box, so after the sticker shock wore off, I found a tank with the dimensions (sort of) that would allow me to use it, an FZone ten gallon rimless beauty, 17.7x11.8x11.8 (inches). It arrived Sunday, a day after the pump (Sicce) and heater (Cobalt). The light (Fluval Nano) arrives Thursday. Other necessities are also on their way, but those are the basics.

The tank arrived well packed, double boxed, with the leveling mat already underneath, and I managed to hoist it up in place myself on Monday. Not bad for three and a half months after surgery! 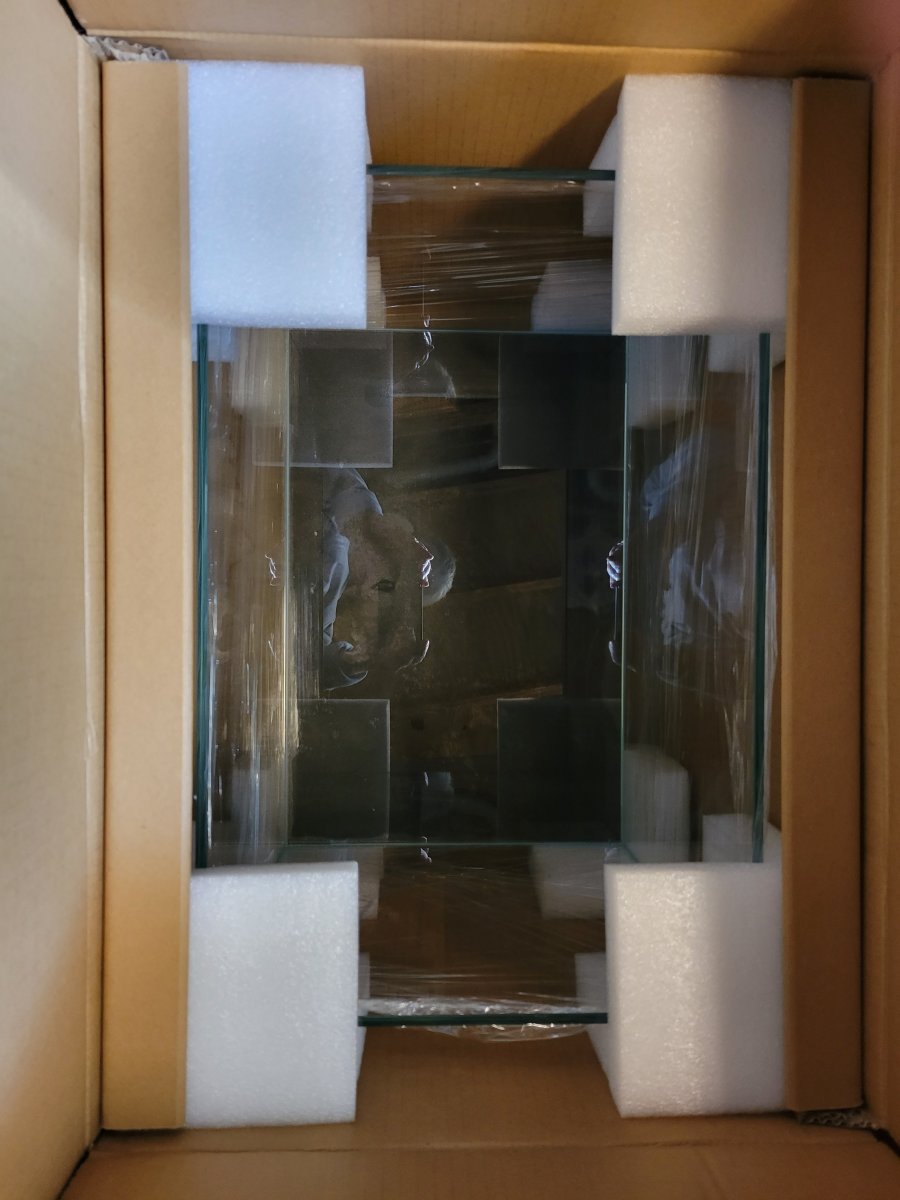 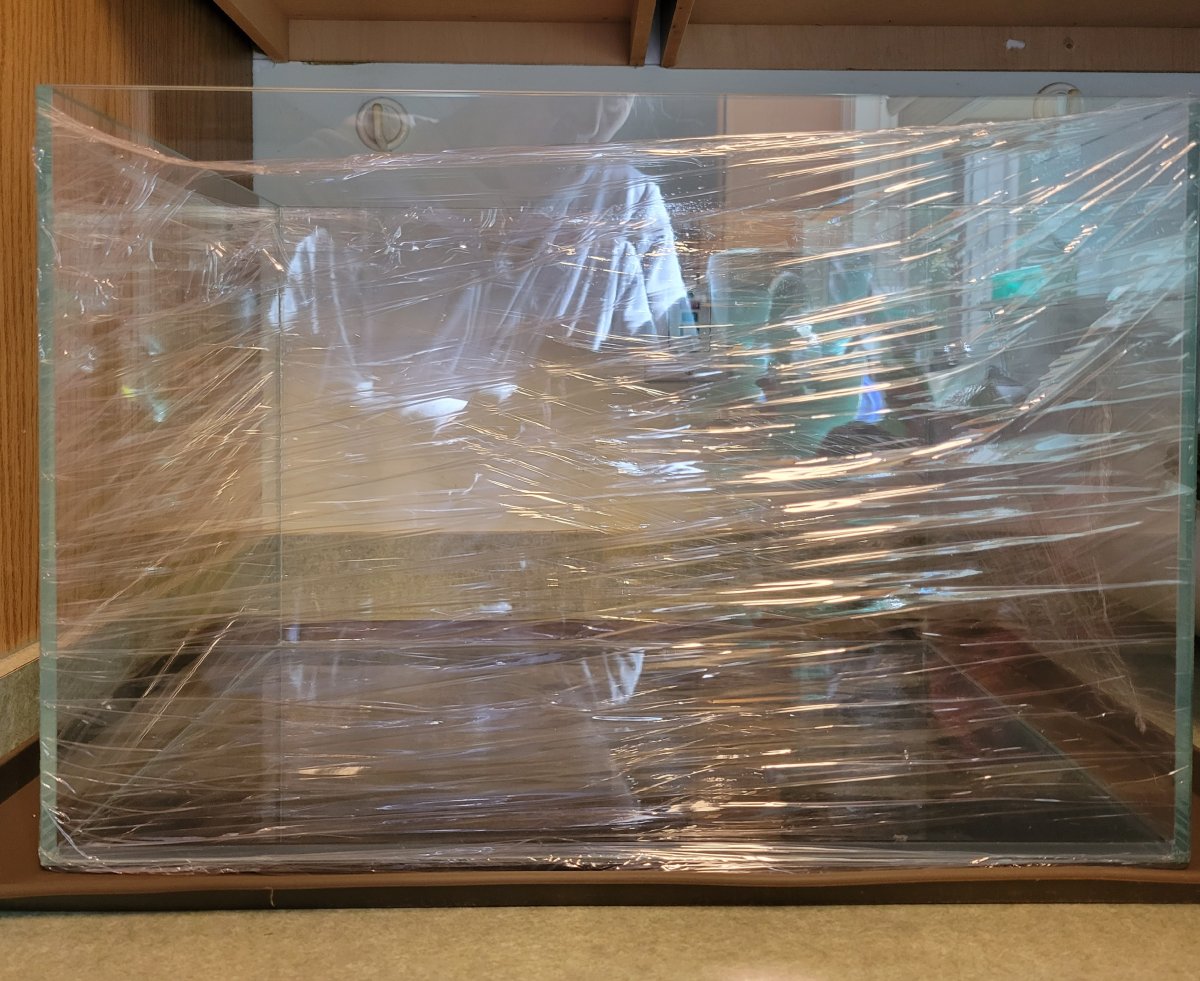 And partially filled for the leak test: 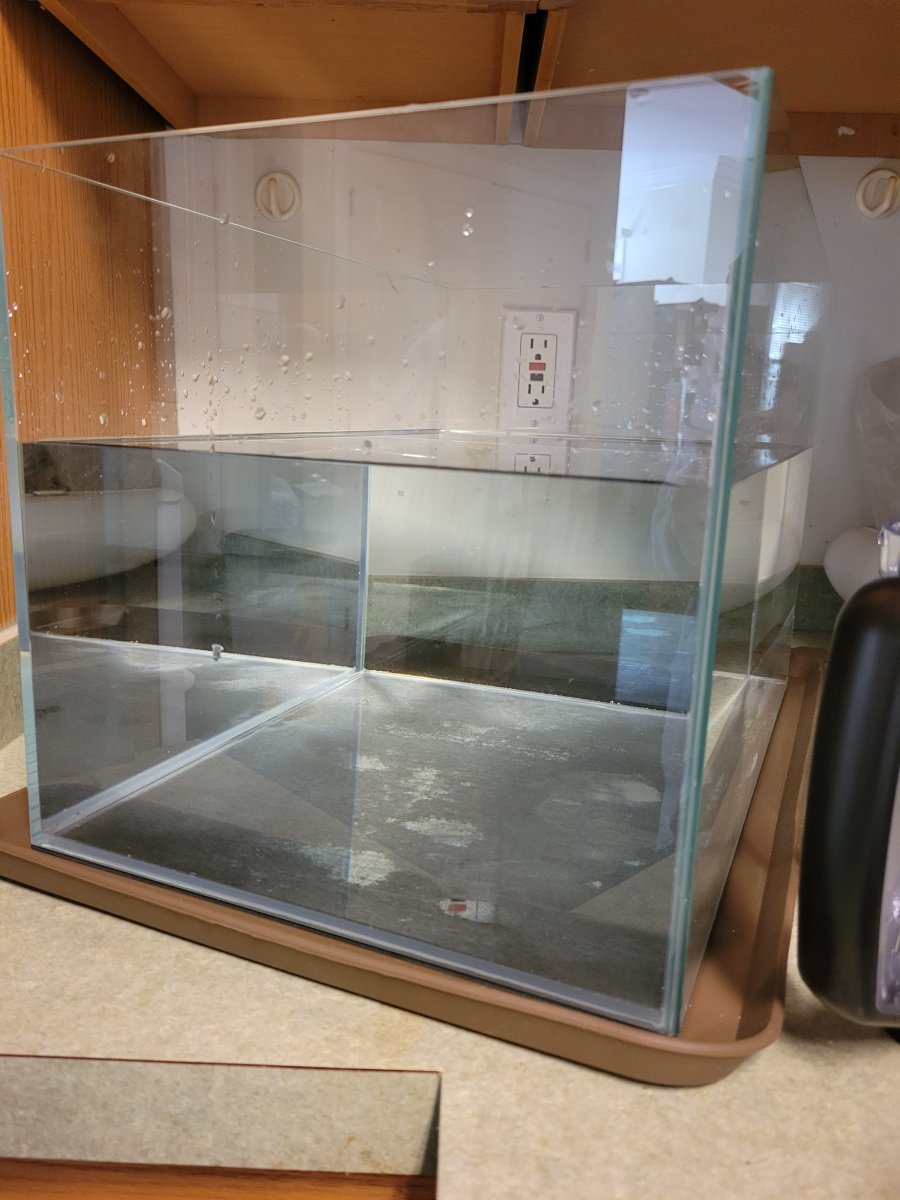 Here's the plan: Nine pounds of live sand, also fresh from the Gulf via Tampa Bay Saltwater, and eleven pounds of premium Gulf live rock, same source, put together from two of their Treasure Chest packages. Lots of work left to do before I order. The Red Sea Marine test kit and other such things are on their way. This will be a much slower, more patient process than the 55; it taught me a lot of lessons. i also had a couple of nanos along the way, the contents of both ending up eventually in the 55.

Fish: a citron clown goby, and either a rainford goby or a tailspot blenny, assuming they would be compatible, which is something I don't know yet. Inverts: undecided. I'm going to let the tank tell me what it needs and go with it.

As I mentioned, the Fiji AIO box almost fits perfectly, but leaves a gap to one side. I put in the box to check before filling the tank with water. Here's the gap, just enough space for a fish or some other critter to get trapped, not to metion being a potential dead zone. Here's a picture. How would you go about filling in the empty space? Pond foam? I haven't used it before, but I know it expands. Would it crack the glass? What are other options? 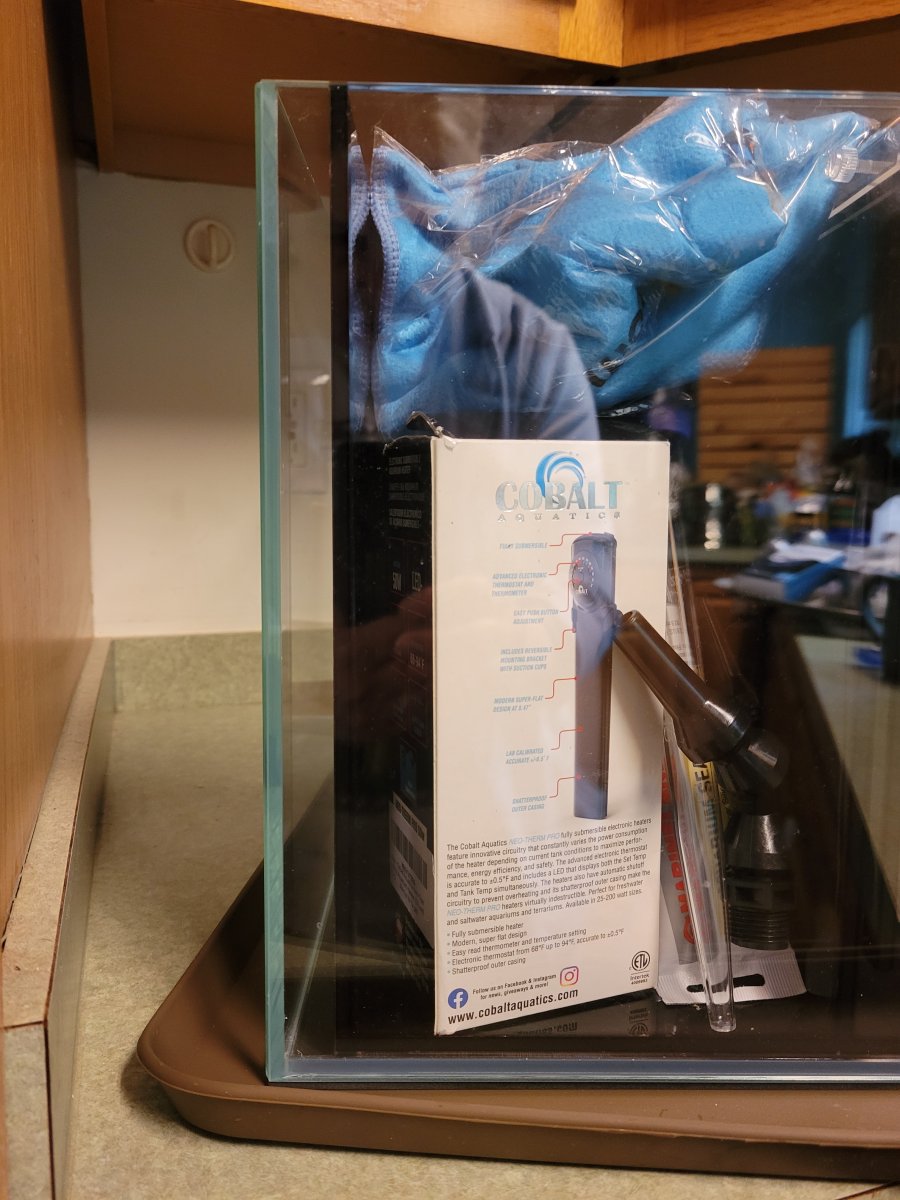 Looking at your pictures are we to assume(yea i know what that means) that box is in the 11.8 end/wall. Why not center it on the 17.7 side/ back wall leaving just over 3 inches on each side of it, or put it against the back glass (17.7) and 1 of the end walls leaving 6 inches of the back glass open. Does that make sense the way I worded it?

I looked at putting it against the long wall, but I thought it looked odd and would make for an awkward aquascape. But I hadn't considered turning the tank... hmm... . After I drain it (after the leak test) I'll look at that. Trying to imagine how to scape it. Might work, but it would put the AIO box in a difficult position for maintenance.

Hello! Couple of things to note. The premium live rock from @LiverockRocks (the R2R account for Tampa Bay Saltwater) must go into an established tank. If you are just setting up your tank, you will want to purchase the base Nano package.

I have a 25g Waterbox AIO, and I cycled my tank with 23 pounds of live sand and a similar amount of live base rock. Just today, about four weeks after adding the base rock, I added another 15 pounds of the premium rock.

I encourage you to check out my build thread to get a sense of the beautifully diverse hitchhikers you’ll find on your TBS sand and rock. The women that run the business are fantastic and very customer friendly. I recommend them 11/10!
Last edited: Sep 28, 2022
OP
D

I understand, but with the limited space, I can't use 15 pounds of sand. I don't want that deep a sandbed. I'll be starting with the Sand and Rocks Treasure Chest package, which is 9 pounds of sand and three pounds of rock. Not ideal, maybe, but I do know what to do to minimize the risk to the hitchhikers. They also come in with the sand, so I want to protect both.

Looking forward to following along as your tank comes together!
OP
D

I finished filling the tank for the leak test, and by tomorrow morning will know for certain. Not expecting any surprises.

I was pleasantly surprised, a couple weeks ago, to find I'd kept my refractometer. Maybe it was a sign! Calibrated it today. 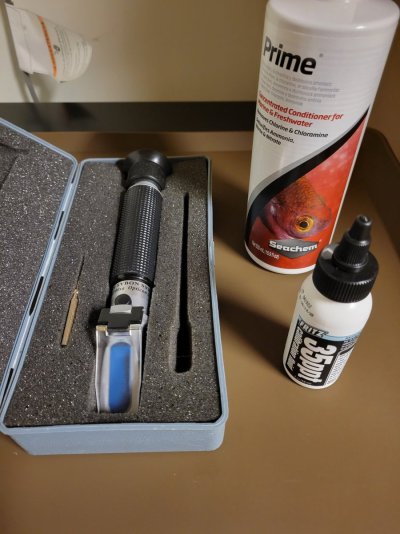 Regress: The FDA food grade 5 gallon buckets with nice screw-on lids for mixing and storing saltwater arrived. Turns out they're made of high density polyethylene, which is not safe for aquatic animals. They have to go back. In their place I ordered a pet food storage container with wheels. Still need an airtight salt storage container. I got the bag of Reef Crystals, because it's much easier to shake it and keep in well mixed. Heavier particles settle over time.

Progress: I also scoped out a different spot, still in the kitchen, to place the tank. It will be much easier to maintain it there.
Last edited: Sep 28, 2022

Home Depot buckets for the win!

Yes! But, good news! I was misinformed about HDPE. It's recycle #2, and it's safe. Sure has an odor, though.
OP
D

More progress: Tank passed the leak test and is in its new temporary place (for before the house renovation to begin in about a year). Filter box Plan B is in the photo below, and it's a solution I can live with and work around. The lid is put together from parts of a 40 gallon breeder glass lid and fits perfectly, as I am not planning on putting in a skimmer. I've never used one. I don't like the handles that came with the lid, so I've ordered a clear one and will attach it with silicone. Buckets are on their wheels and holding 4 gallons each. (Right now this little tank is the neatest, cleanest thing in my house, sigh.) 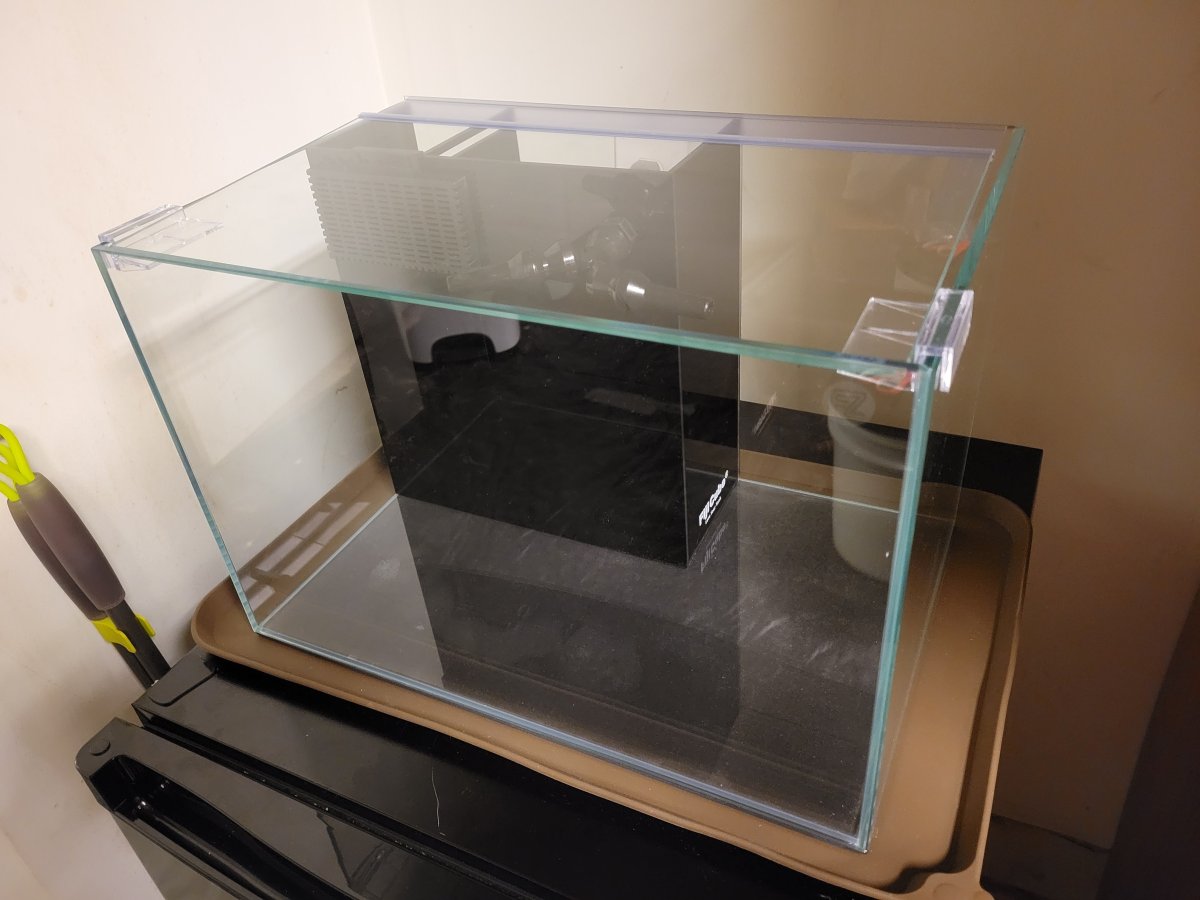 Made some progress over the weekend: Affixed the AIO box in place with silicone and placed the pump in its chamber. I have eight gallons of water waiting in buckets, but today's project is to paint over the part of the lid that covers the AIO, using non-toxic black acrylic enamel. Once it dries, it's actually dishwasher safe.

Oh, and I mounted the light (Fluval Marine and Sea Nano) and programmed it. Here's a photo of the basic equipment boxes in front of the tank with the light mounted: 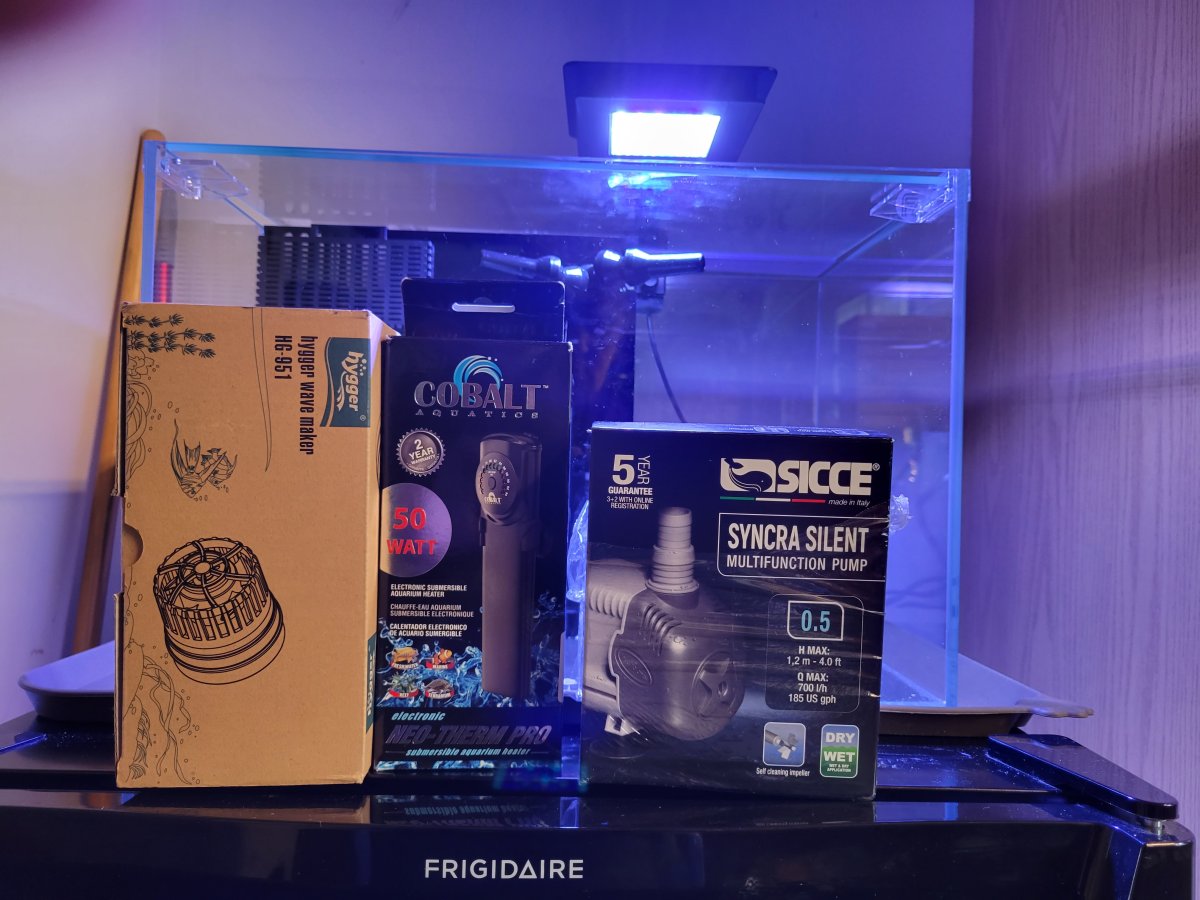 Looked around the kitchen for something to put under the light to check its effect on colors: 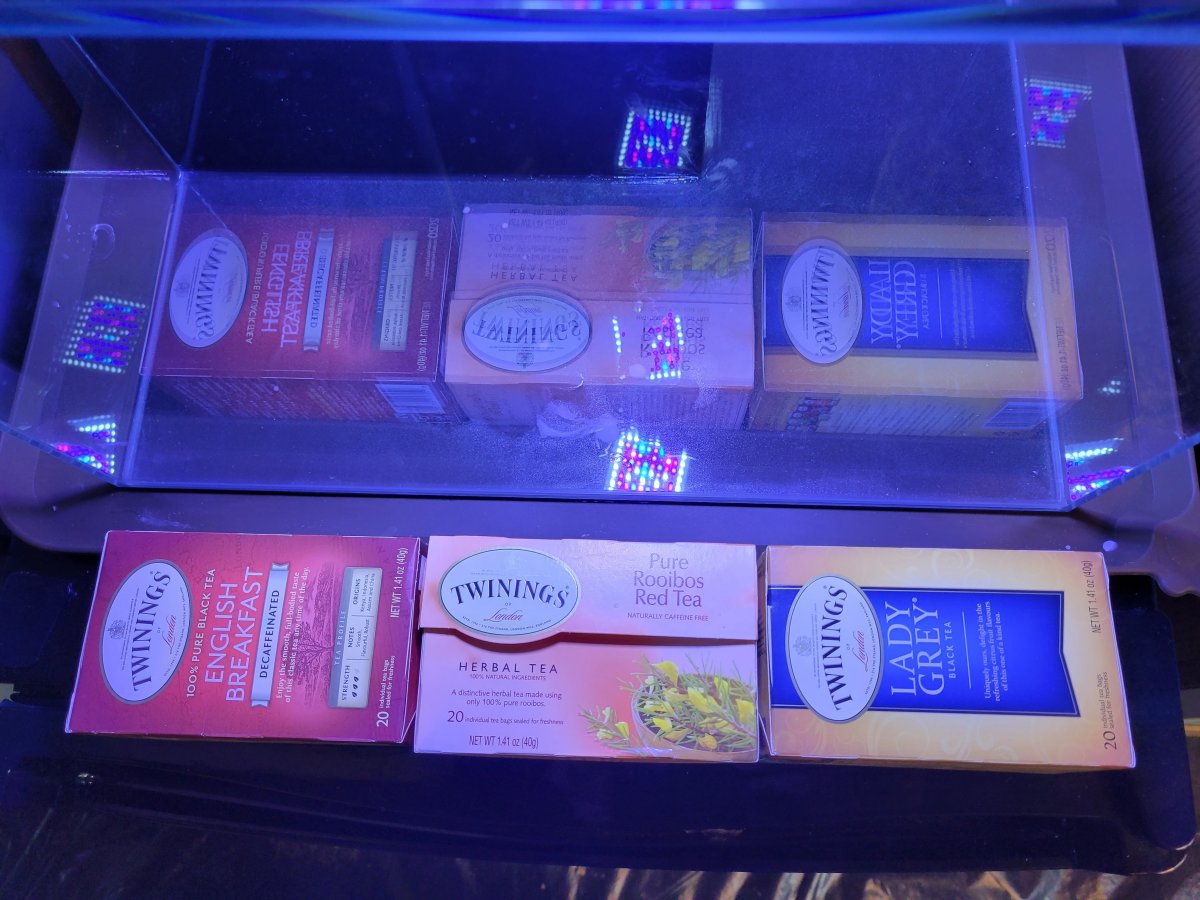 Here are the same tea boxes on the kitchen counter: 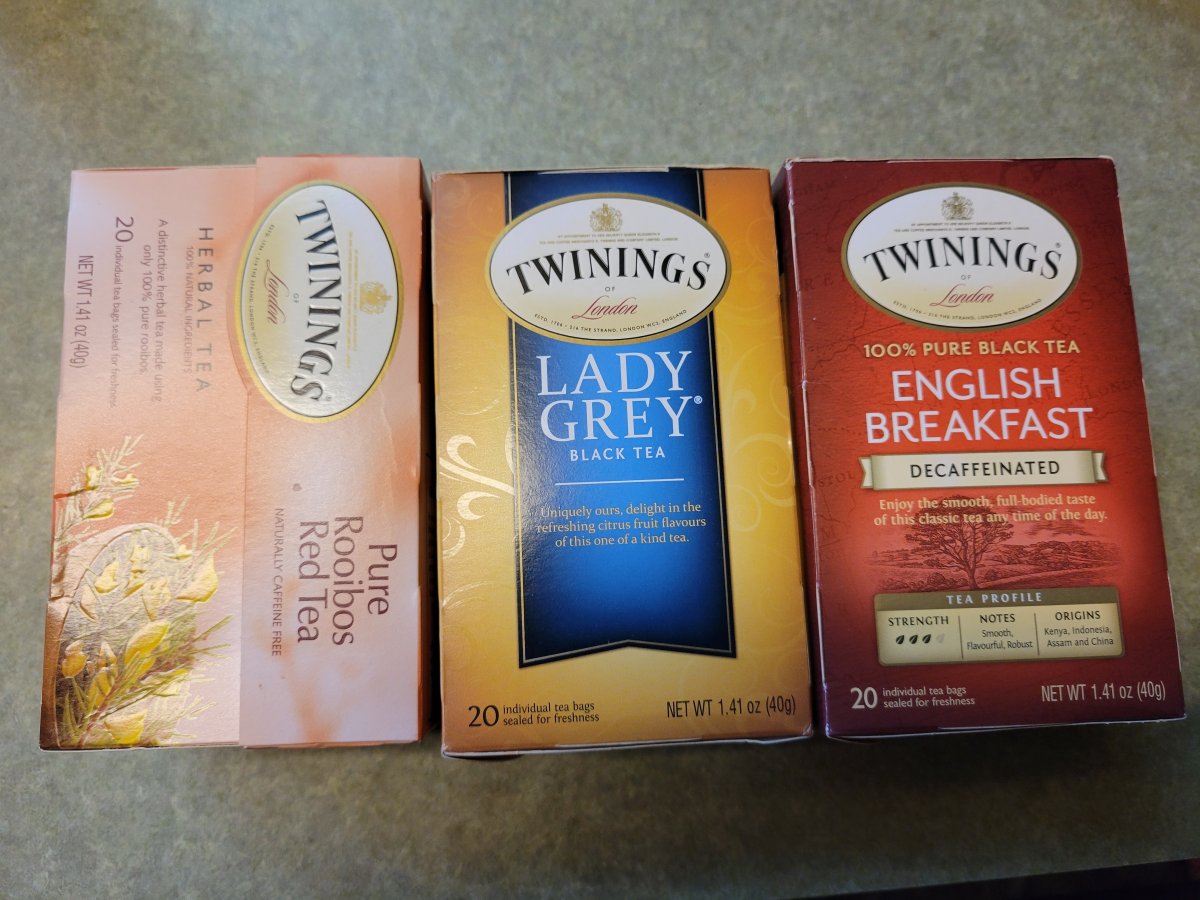 I think the light (on auto balance) cools the red and peach colors, but blue and yellow seem less affected. I like the look.

Minor delay... Is there such a thing??

Forgot to check whether the temporary stand (aka mini fridge) is level in all directions. Partner promises to level it for me Friday evening.

Will update Saturday after I've filled it up and checked the pumps and heater.