Very embarrassed to say I didn’t post a build thread in February because I couldn’t figure out how. Rest assured, I went through this forum and BRS rigorously and did A LOT of research and reading! Please Comment/message any and all opinions/thoughts/ideas! Here we go.

i have been running an innovative marine 10 gallon all in one nano for 2-3 years. I’ve burned through $$$ in fish and corals, neglect mostly. Some Softies and basic stuff that the kids liked.
But it wasn’t until my buddy bought a tank as well that I really Wanted to push to the next level. 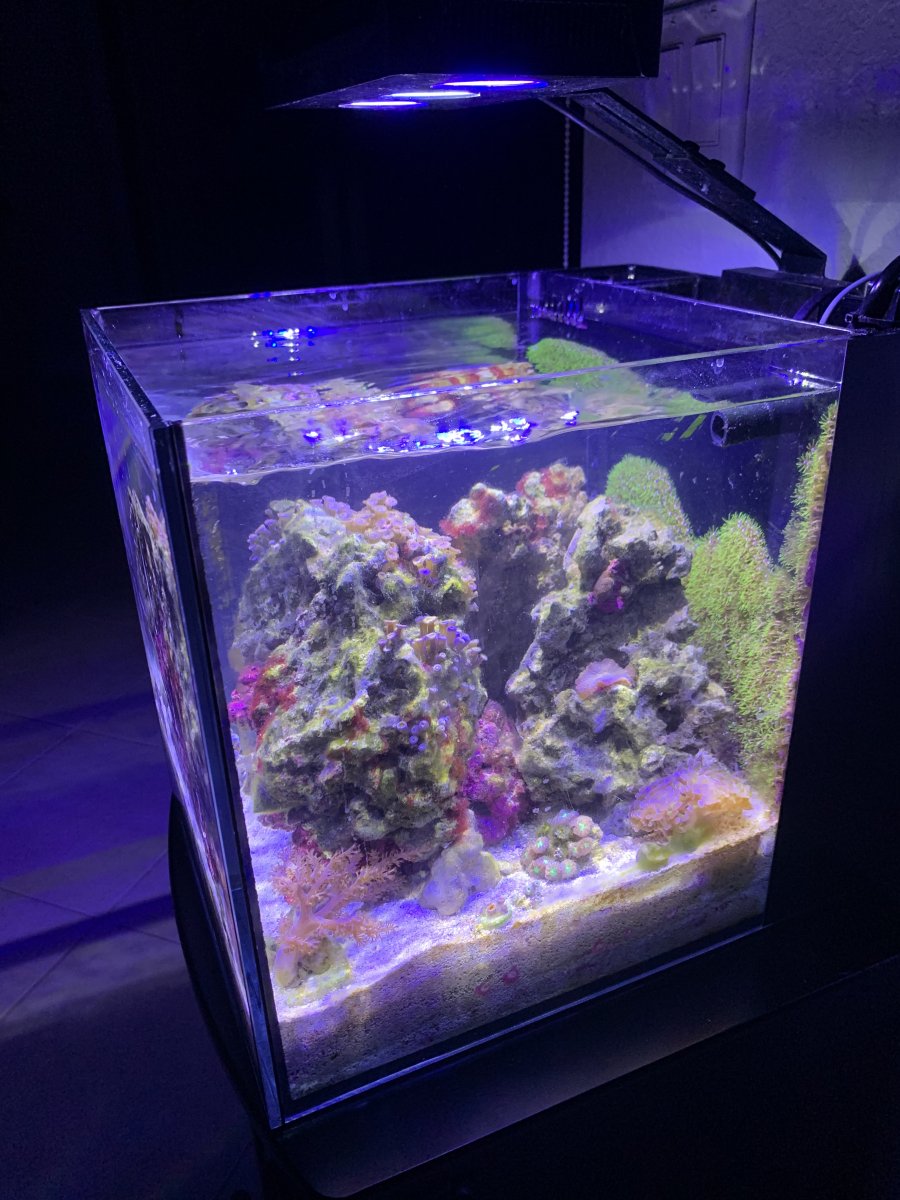 I purchased a Red Sea Reefer 250 off a local guy. 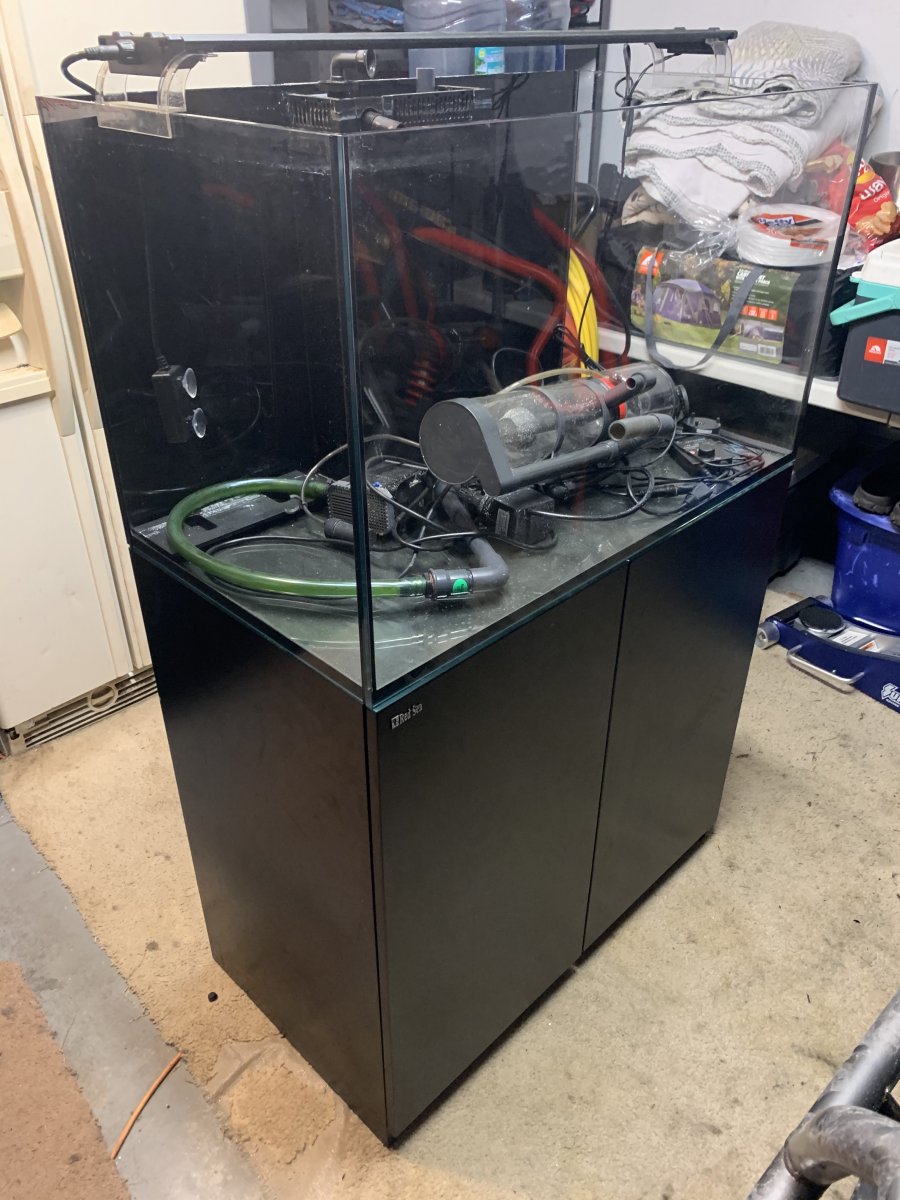 $660, perfect condition, Coral life skimmer, Jaebo wavemaker pump, Green element light. Rio 2500 pump. Also came with plenty Of chemicals and other misc stuff.
spent almost 2 months planning its location in the house, setup, and plans for the tank.
I love the LPS and zoas, so that was the general plan.

I had the perfect wall in mind to put the tank, but much like parenting and reefing, things rarely go as planned. This was the water main from upstairs. 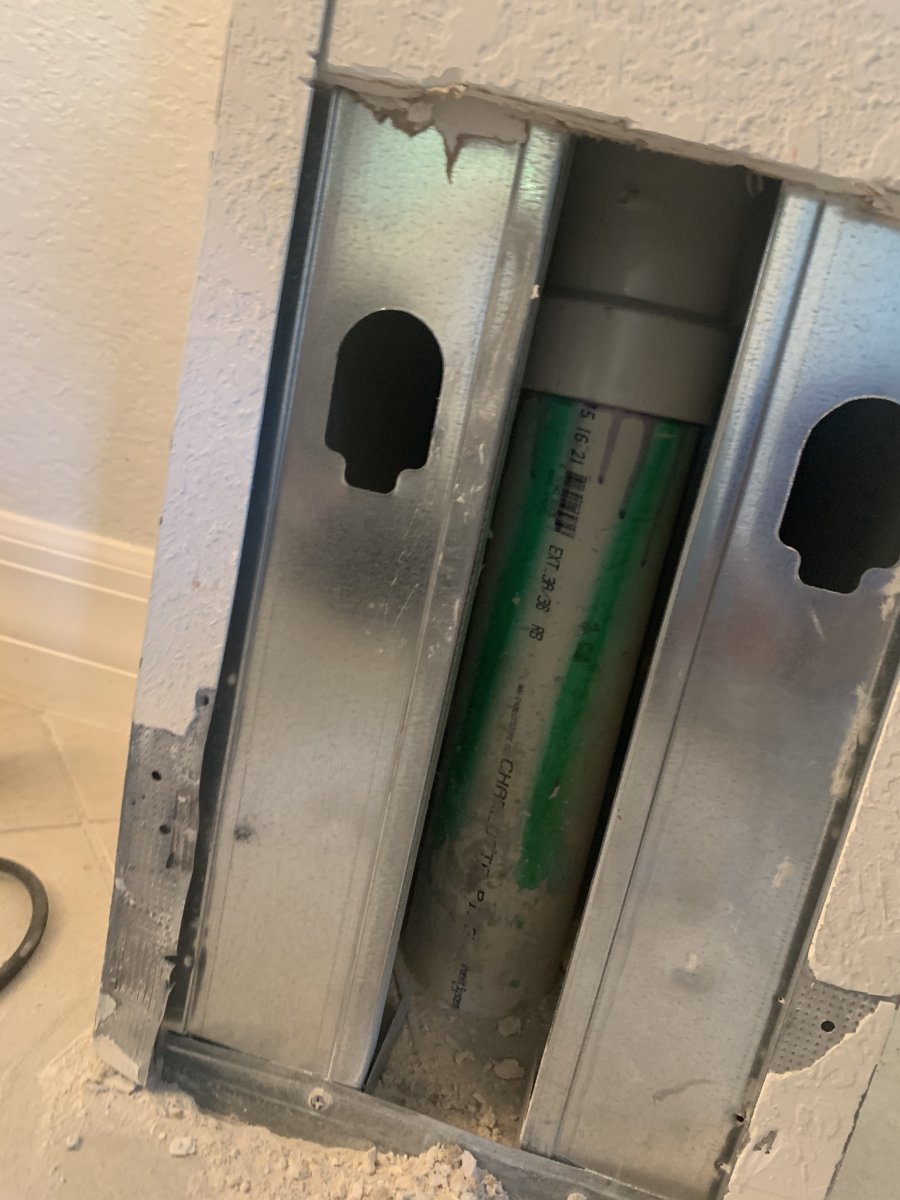 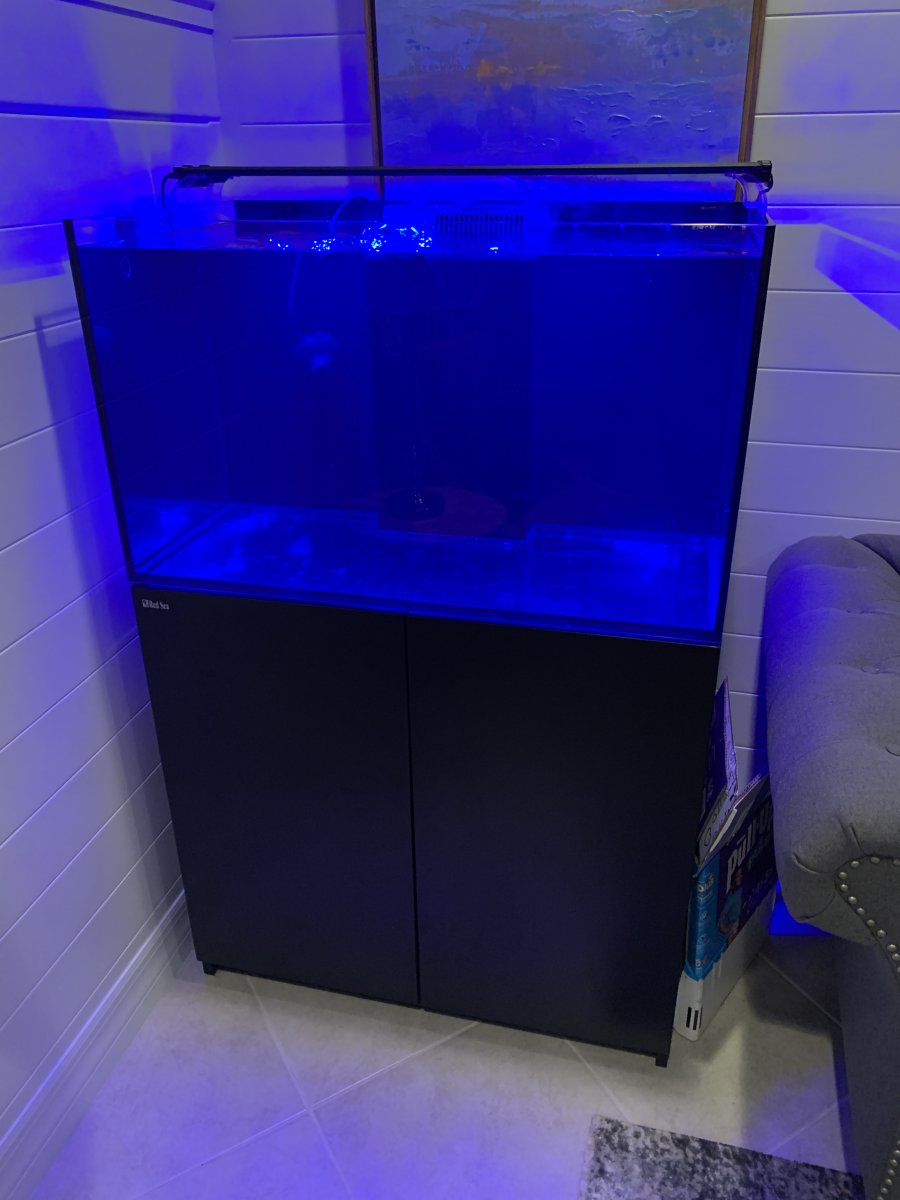 Got her all plumbed, RODI water added. No leaks. Now rocks...went with Carib sea purple arch life rock. Walked in the store with the cutout of the bottom of the tank on a
Diaper box. 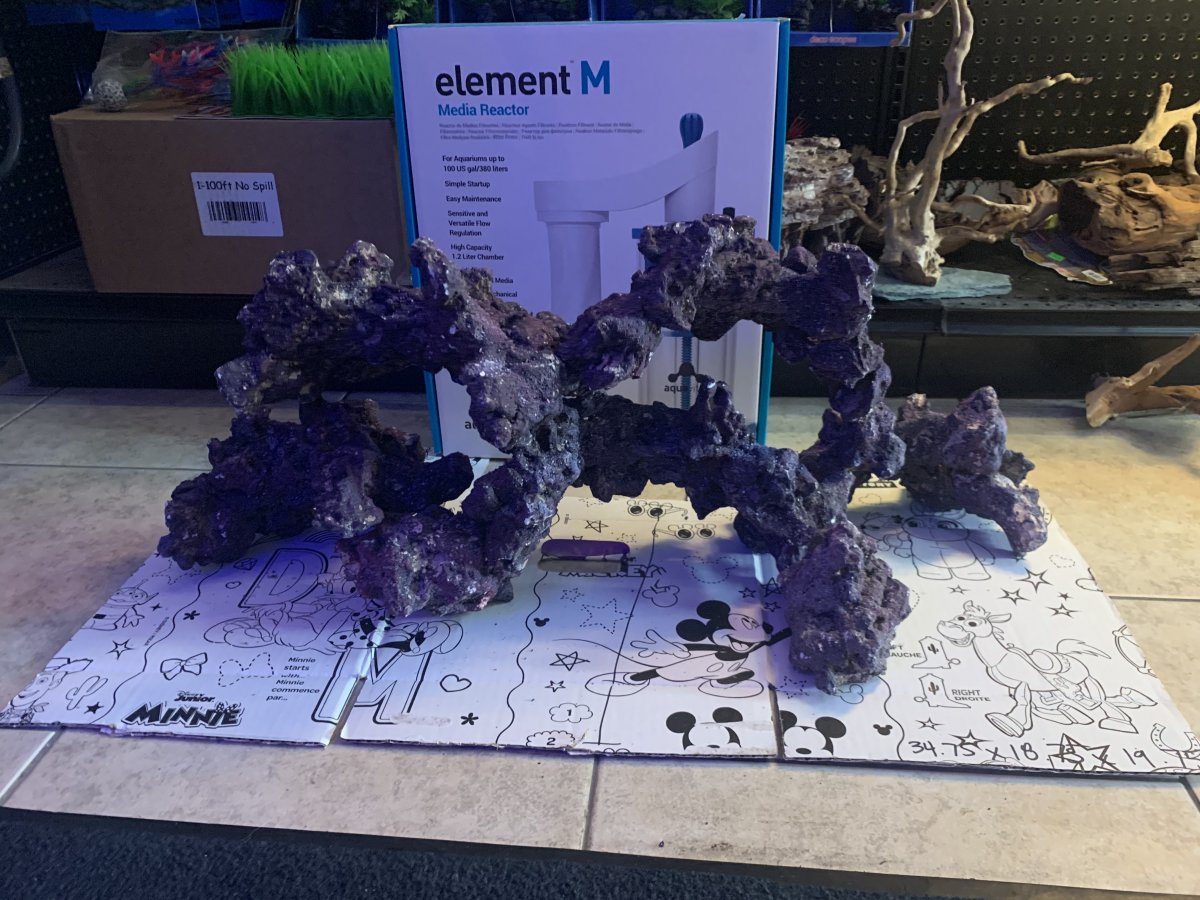 Soaked in RODI and prime for a few days, then dried and ended up glueing + epoxy sandwich some Of the main pieces and arches. 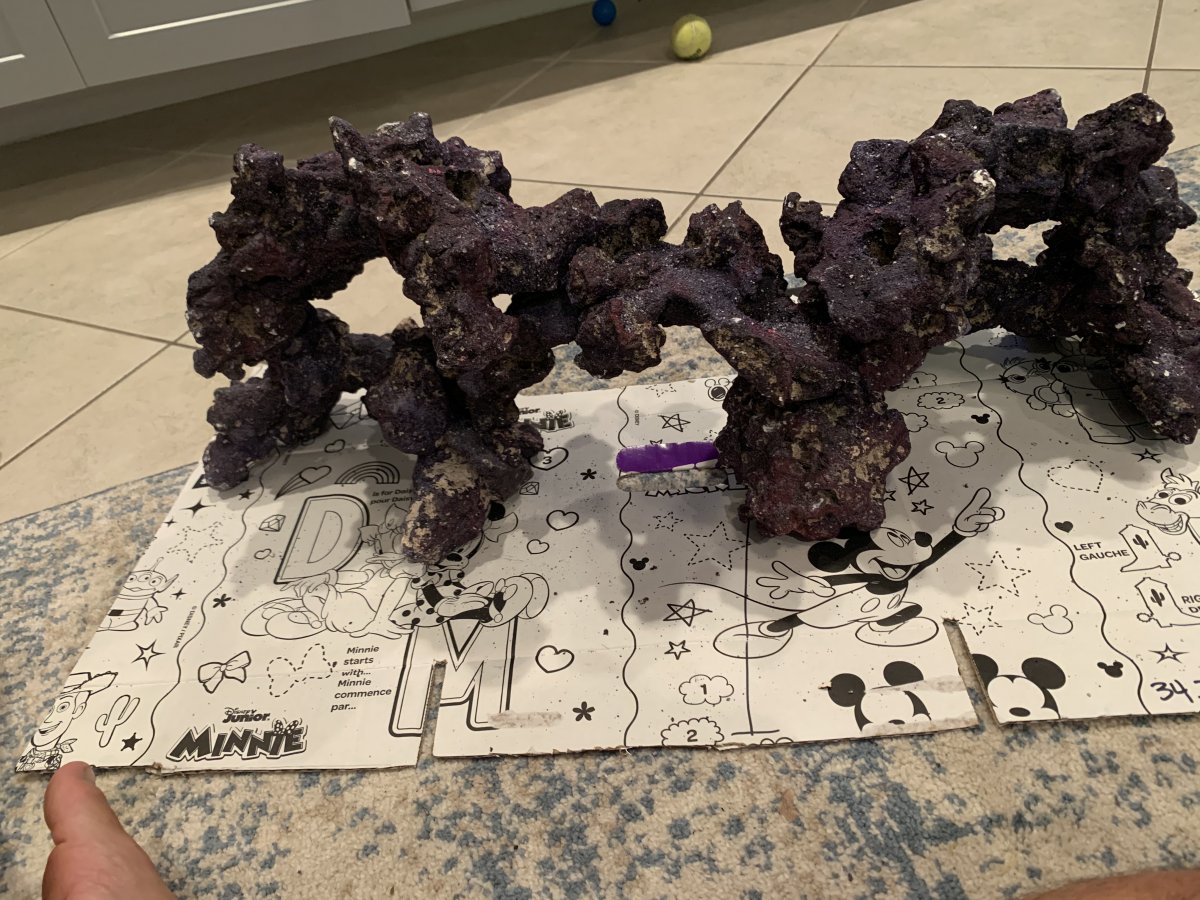 Put 20 pounds of Carib sea Fiji pink, added rocks, and added another 20 pounds around them. Contemplated right in glass vs Plastic egg crate, went right on glass.
I grabbed a few of my pieces of live rock from the nano tank and incorporated into the build. Although it is a slightly different color, really can’t tell with in the blue lights. I did dip the rocks in hypersalinity (1.040) saltwater and a quick dip in fresh RODI just to get off
Any critters but it has never been a problem in my nano. I also added quite a bit of marine pure blocks in the sump I had from a previous cichlid tank. After some stability and a few weeks, added some planned zoa rock islands. 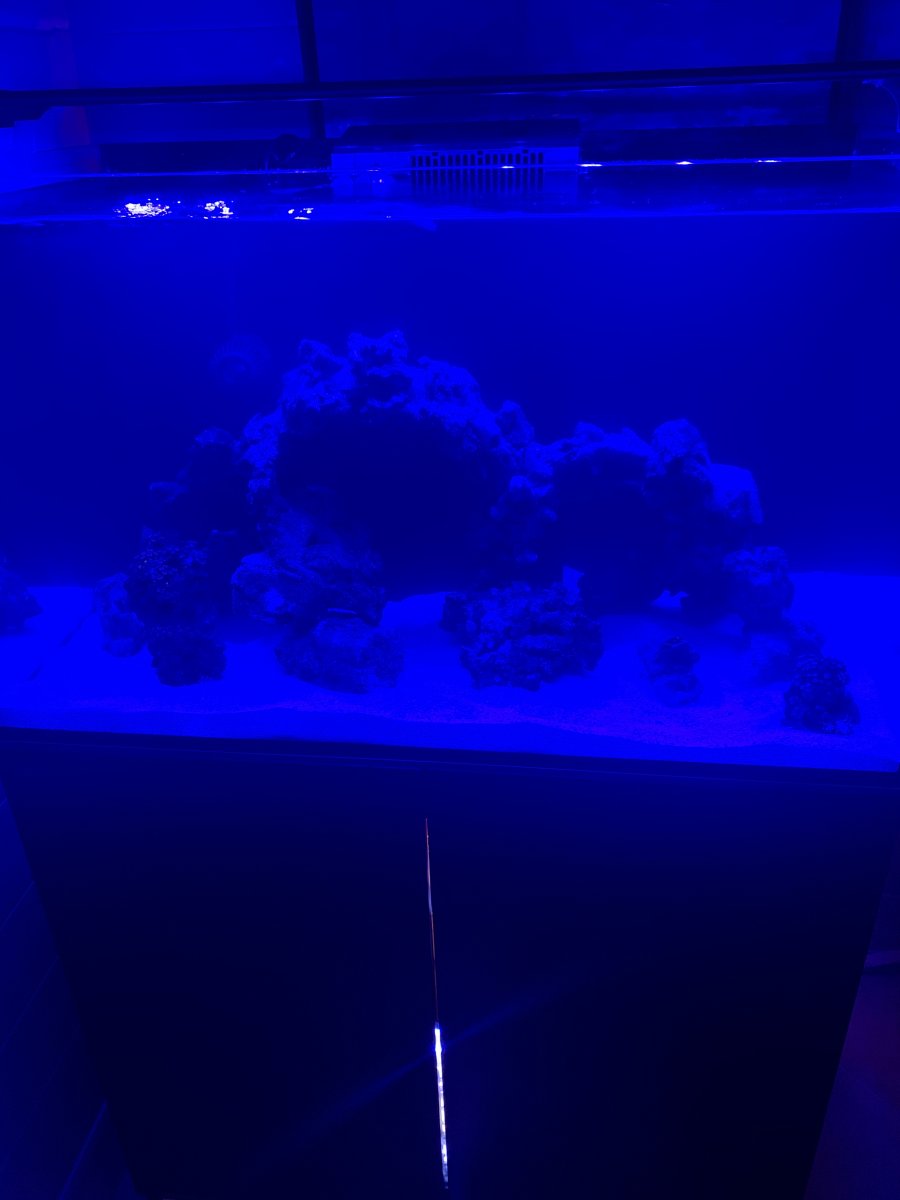 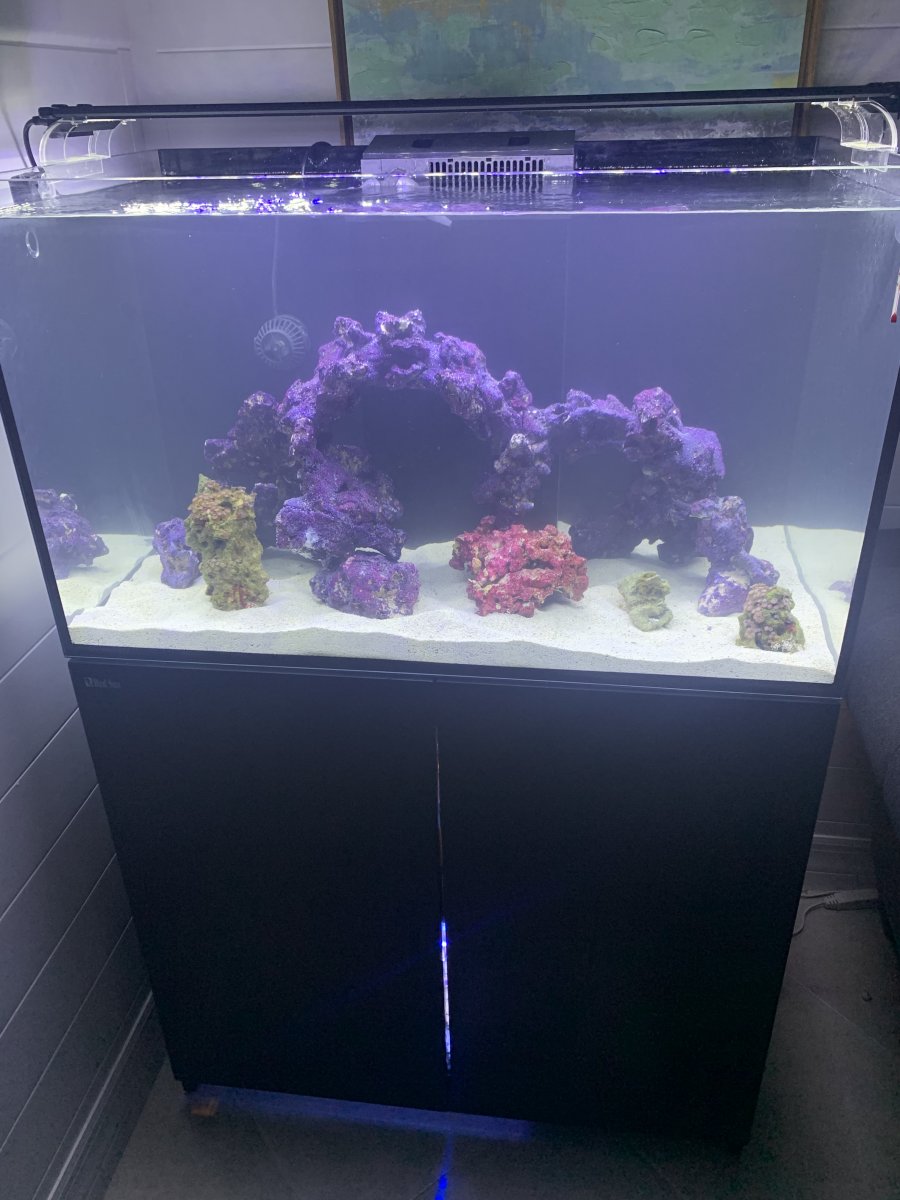 Sump needs obvious upgrade in return pump and skimmer. Also had to place the 200W Eheim heater in the overflow box since
It was too big for the sump. Something I would also like to remedy in the future. Would also like temperature controller for redundancy. Had a cobalt cook my nano tank and lost my 2 year old clown. I “upgraded” the light on my nano and used the original for the sump. To get it as close to the sump with least amount of light spill, i did a little DIY bending. 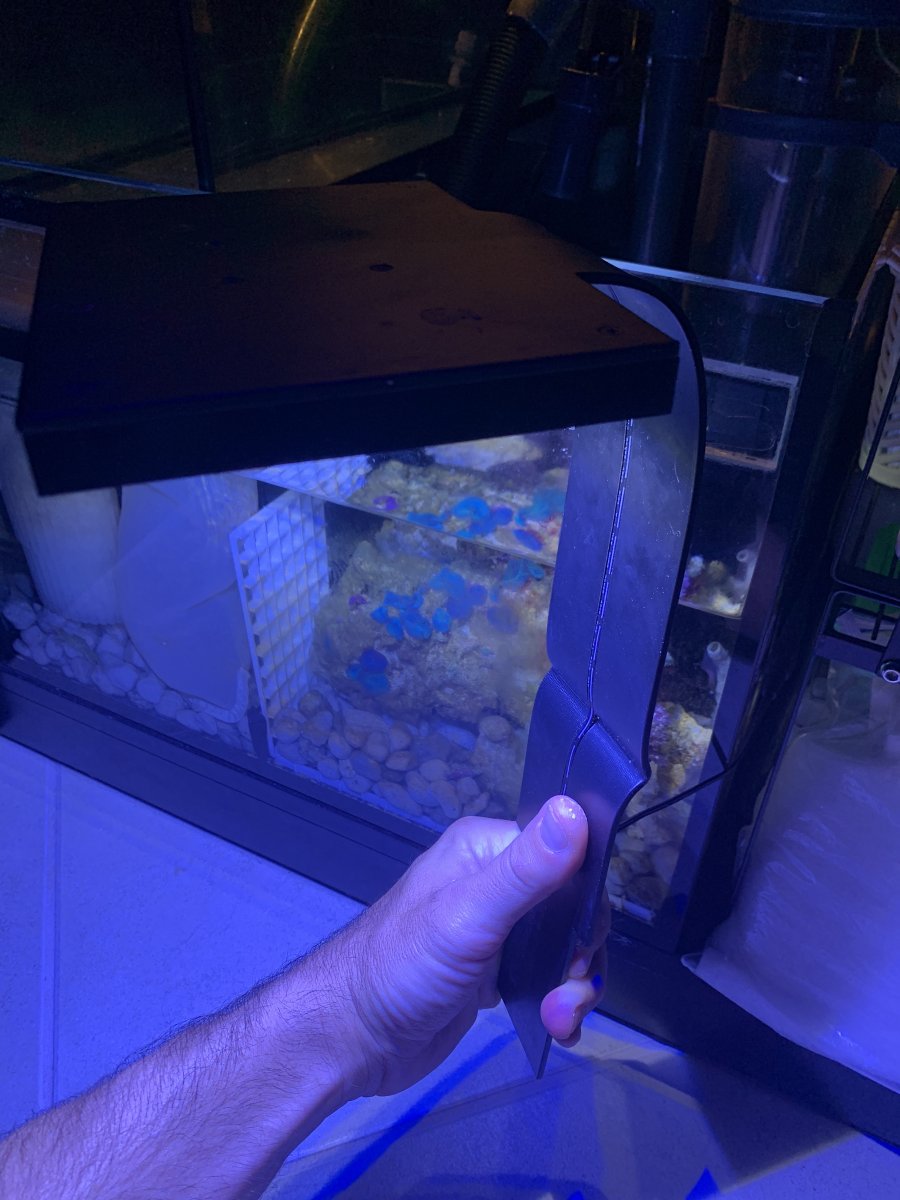 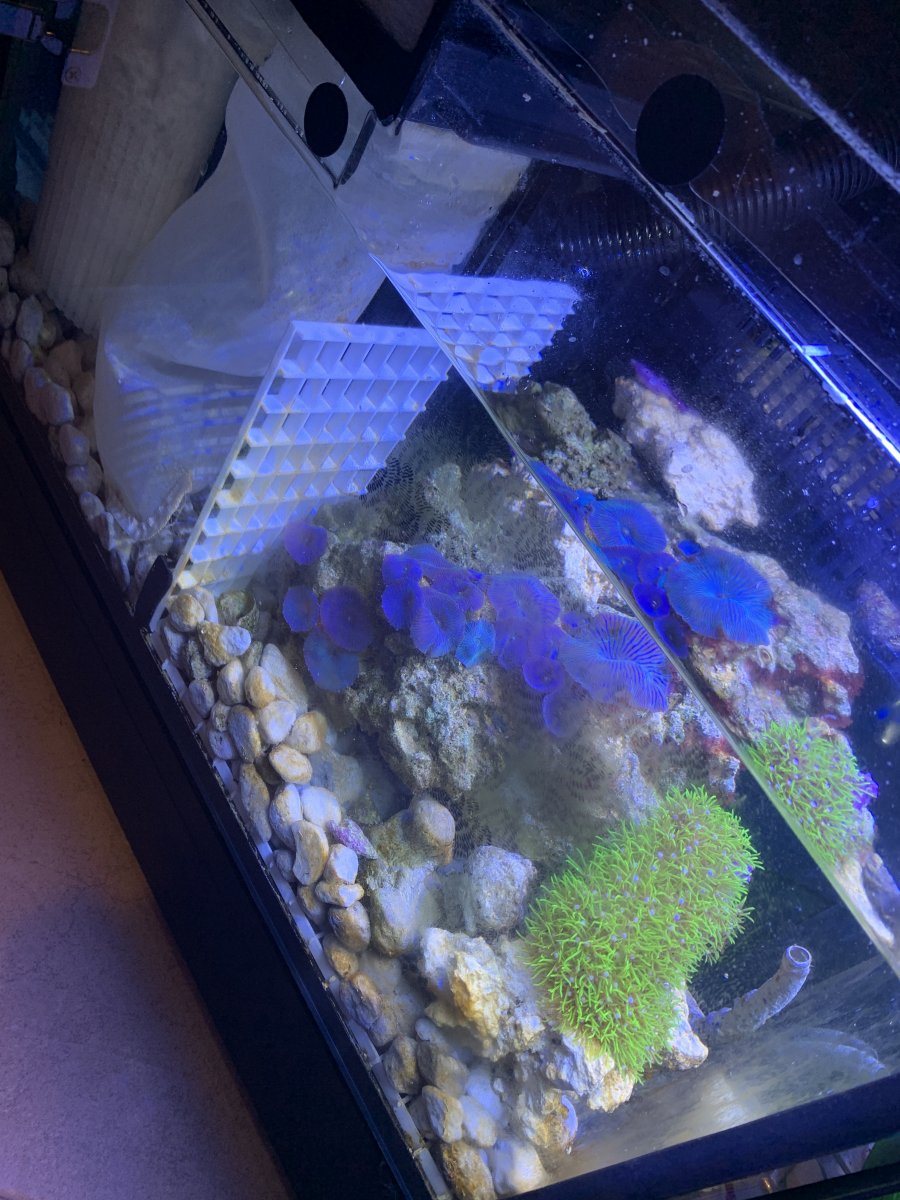 this is the sump now. 1 filter sock and 1
Media basket with polyfill, filter pad on top of both. Little media stones I had left Over from my old cichlid sump lining the bottom. Built a
Little egg crate wall so my planned macro algae doesn’t escape the fuge. Green star polyp will go on the back overflow wall of the DT.
Lots of marine pure Block, which I had to cut a bit to try and accommodate the crappy skimmer. Have yet to turn the skimmer on...just too loud. Had some Seeded cubes from a failed algae barn “ultimate refugium” experiment In the back of my AIO nano. 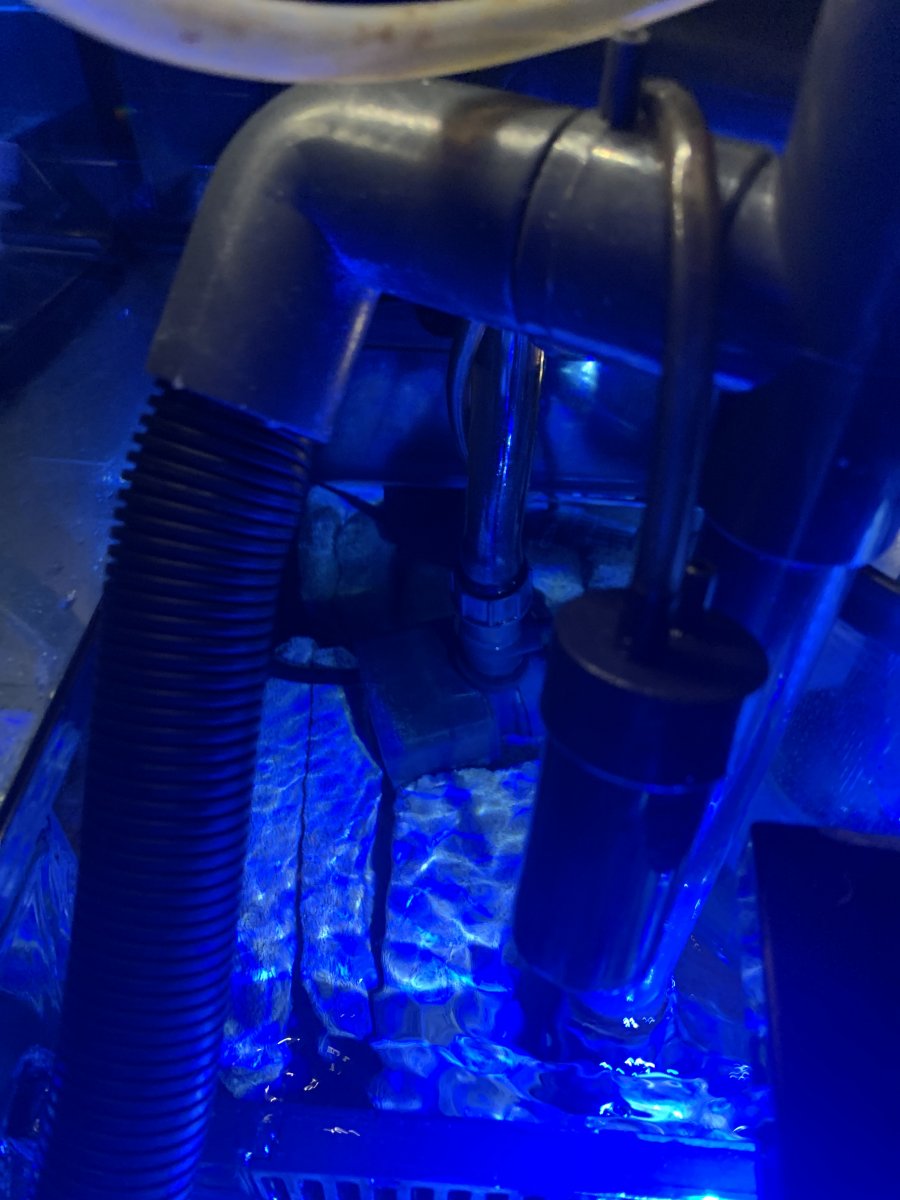 running polyfilter for water polishing and a little carbon for now. 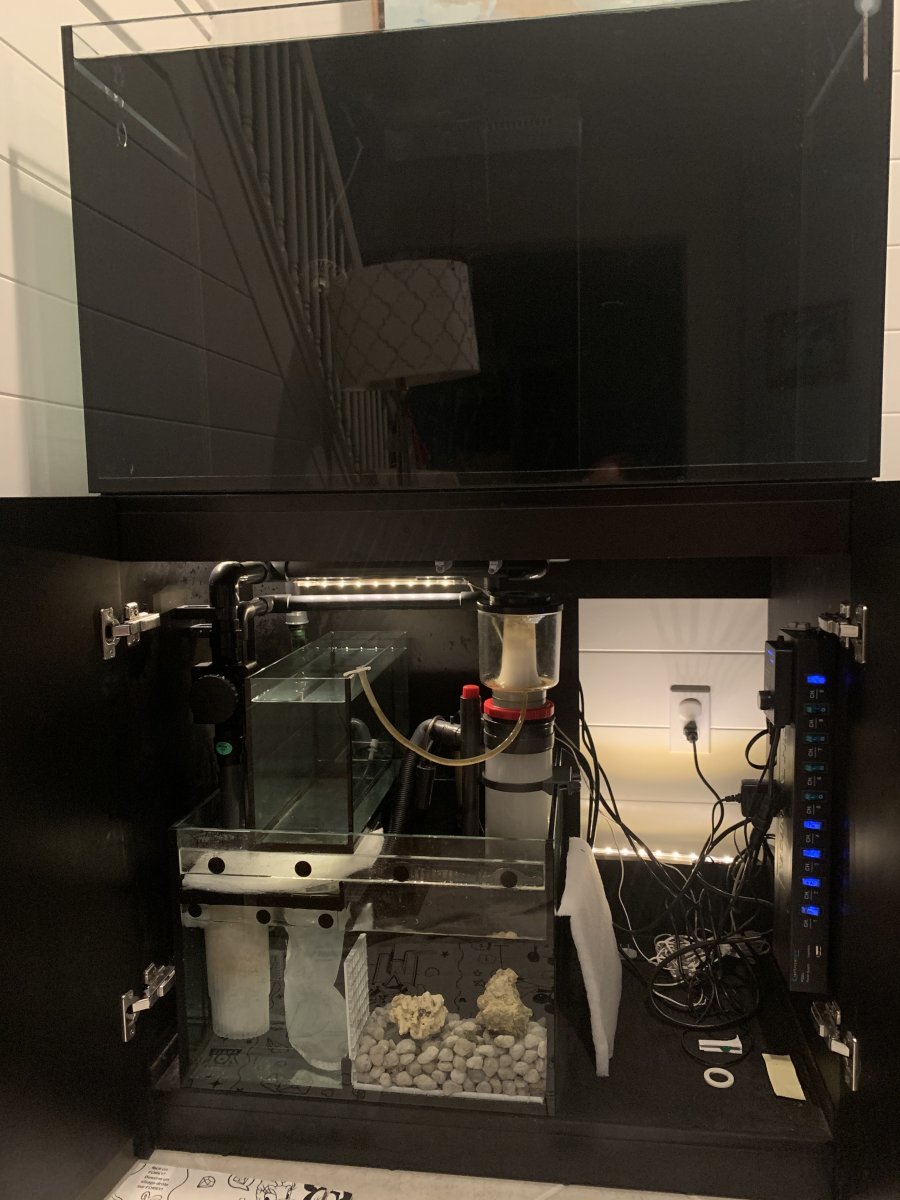 Technical pro for the wiring but need to clean them up a bit. Also built a small shelf I got off Amazon to organize. Lights from ikea 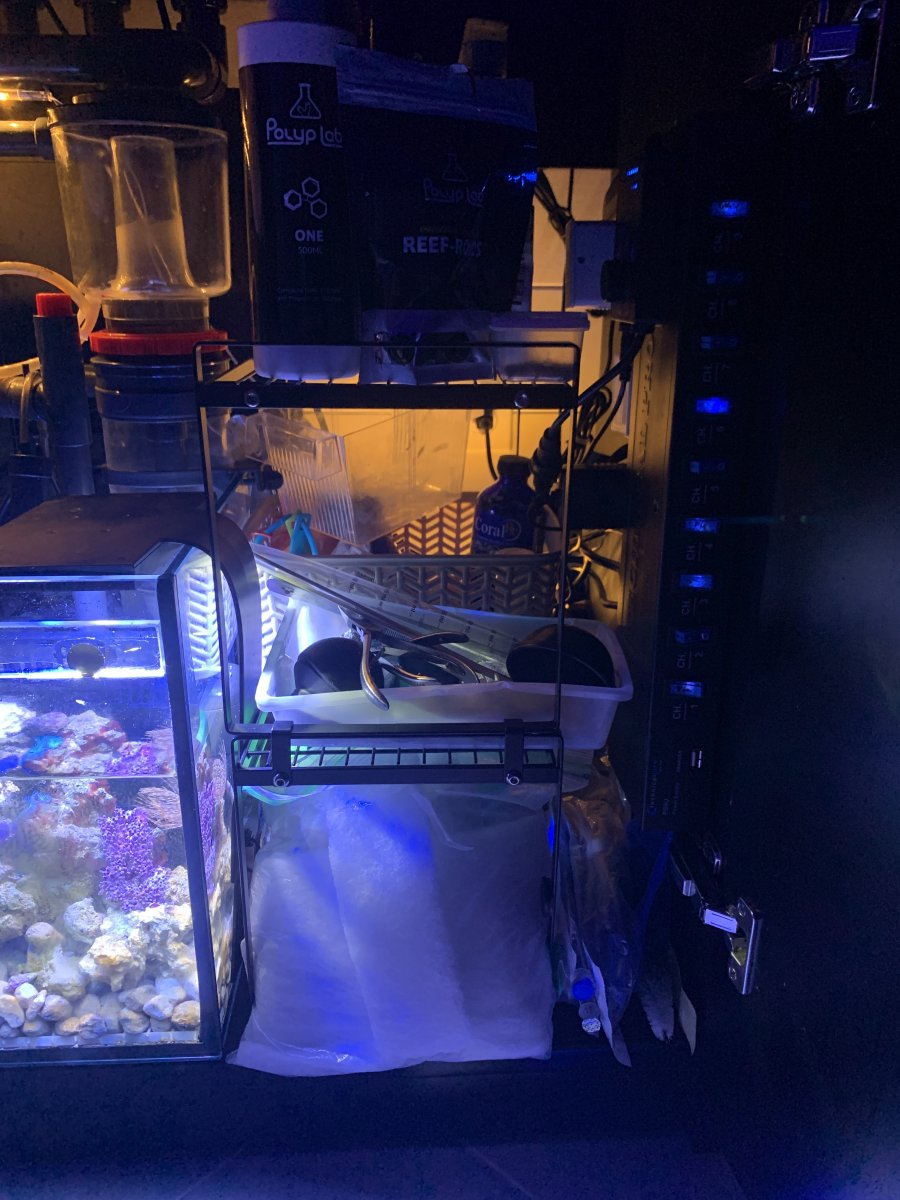 tank is cycled, everything looks good and is happy. Dosing Red Sea AB+ 2x a week, spot feeding some corals reef roids 2 x a week, adding polyp lab “one” daily.
few emerald crabs, trochus snails, and blue legs from nano into the fuge and DT.
Wasn’t going to add fish for a while,
But caught this sand perch in the gulf while bait fishing for pinfish and never used him. He survived 36 hours in a live well, bucket, and bin. Figured he deserved a safe forever home. Meet, Persius the Sand Perch. Note to self, not a Good tank mate...ate my buddy’s platinum clownfish I had in a QT box for him. My son tipped it “accidentally” and Persius had a very expensive sushi dinner. 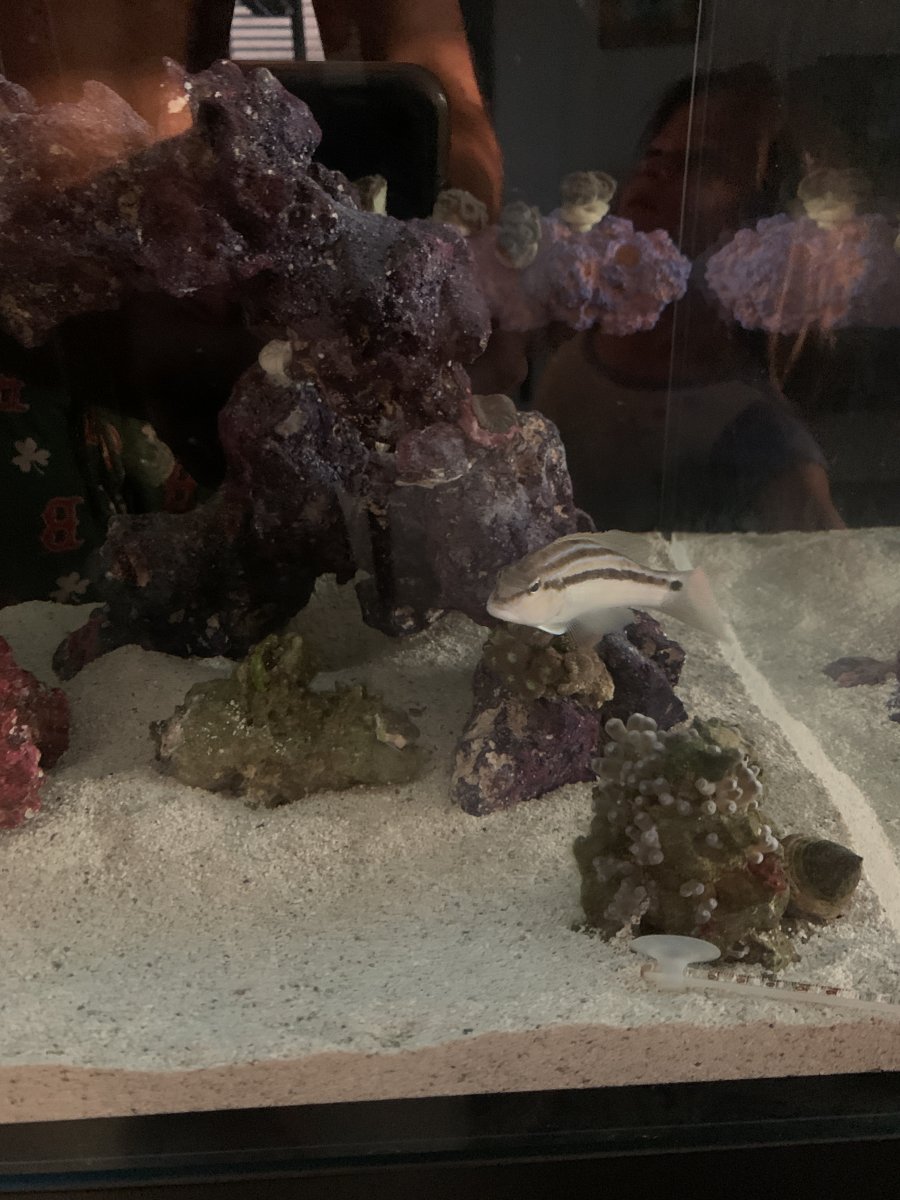 I am very aware that I need to get better about water testing. With all the automation and technology, there isn’t an excuse anymore. I believe that will be the key to long term success with the tank. For now, Will just enjoy the process, move slow, and load up on goodies at Reef-a-palooza in Orlando!

powerhead-ecotech MP vs Nero? Other? Dual gyre on either side of the overflow? 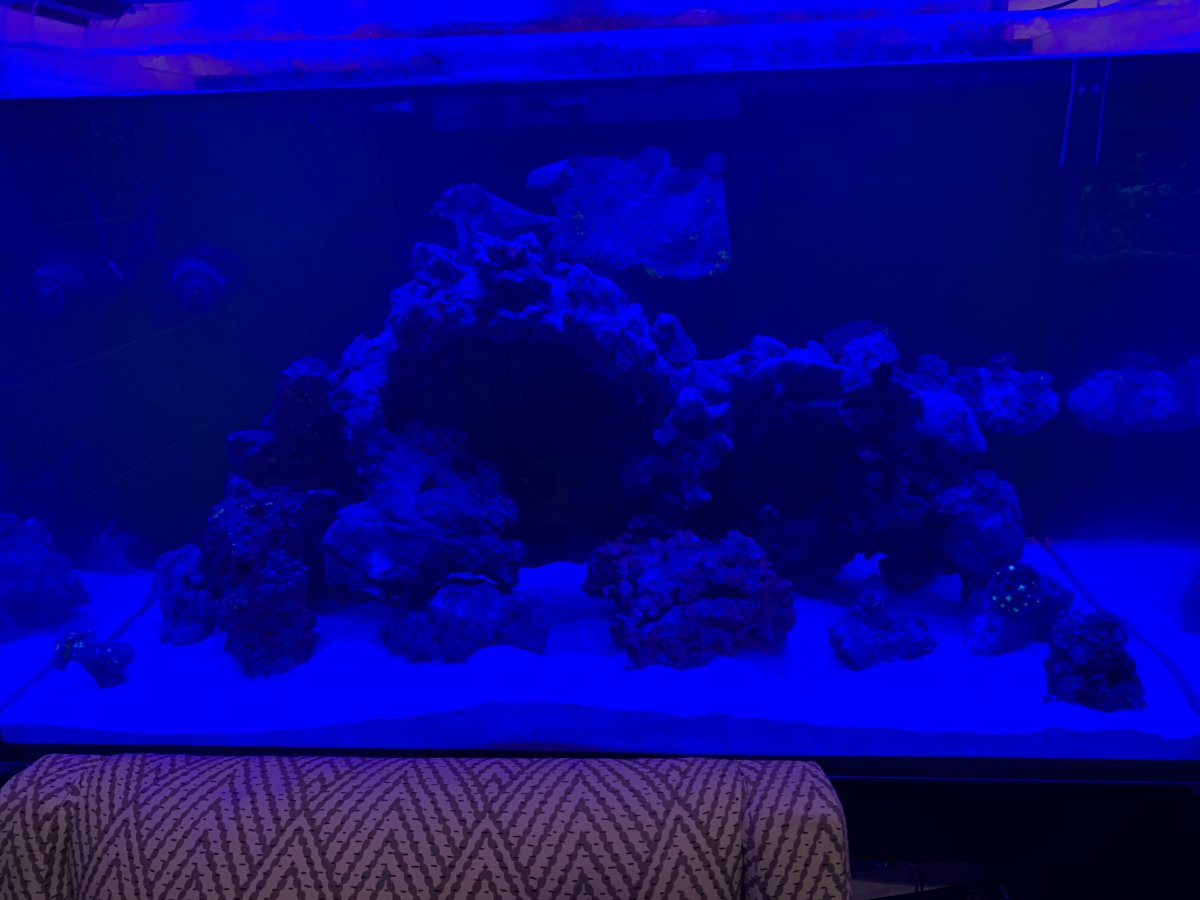 That was quite a few hours of mindless swiping The gram, reviewing different videos, pics of tanks, and lots of “NSA” videos on BRS, haha. hopefully the arches will give me some height if I want to dabble in a little SPS in the future!

JuiceByCliff said:
That was quite a few hours of mindless swiping The gram, reviewing different videos, pics of tanks, and lots of “NSA” videos on BRS, haha. hopefully the arches will give me some height if I want to dabble in a little SPS in the future!
Click to expand...

@JuiceByCliff nice start on the build. Lots of room to move forward. I have a Reefer 250 too, see my build thread. I will be following this thread.