I just picked up a 130 gallon tank today... 36w x 24d x 36h. I've never had a saltwater tank, so I'm diving in head first... no pun intended, as I'm sure I'll have to dive into this tank at some point with it being 3ft deep. I've watched the 52 weeks of reefing, the 5 minute guides, all of Joey's videos, and countless other youtube channels, I feel like I have enough of a groundwork of knowledge that I might be able to pull this build off.

Here is a google drawing of the layout I'm planning on doing. I have the tank, but I need to build the stand. I built a stand for my 75 in the past and it was good, but I feel like I used WAY too many 2x4s and took up valuable space, it was much stronger than it really needed to be. Looking at new tank packages and the stands at the stores, they are just built out of plywood... I think I'm going to work on some plans and try to build a strong, yet, open frame stand. I'll still have the 2x4s in there for the frame, just not as many as I've had before. 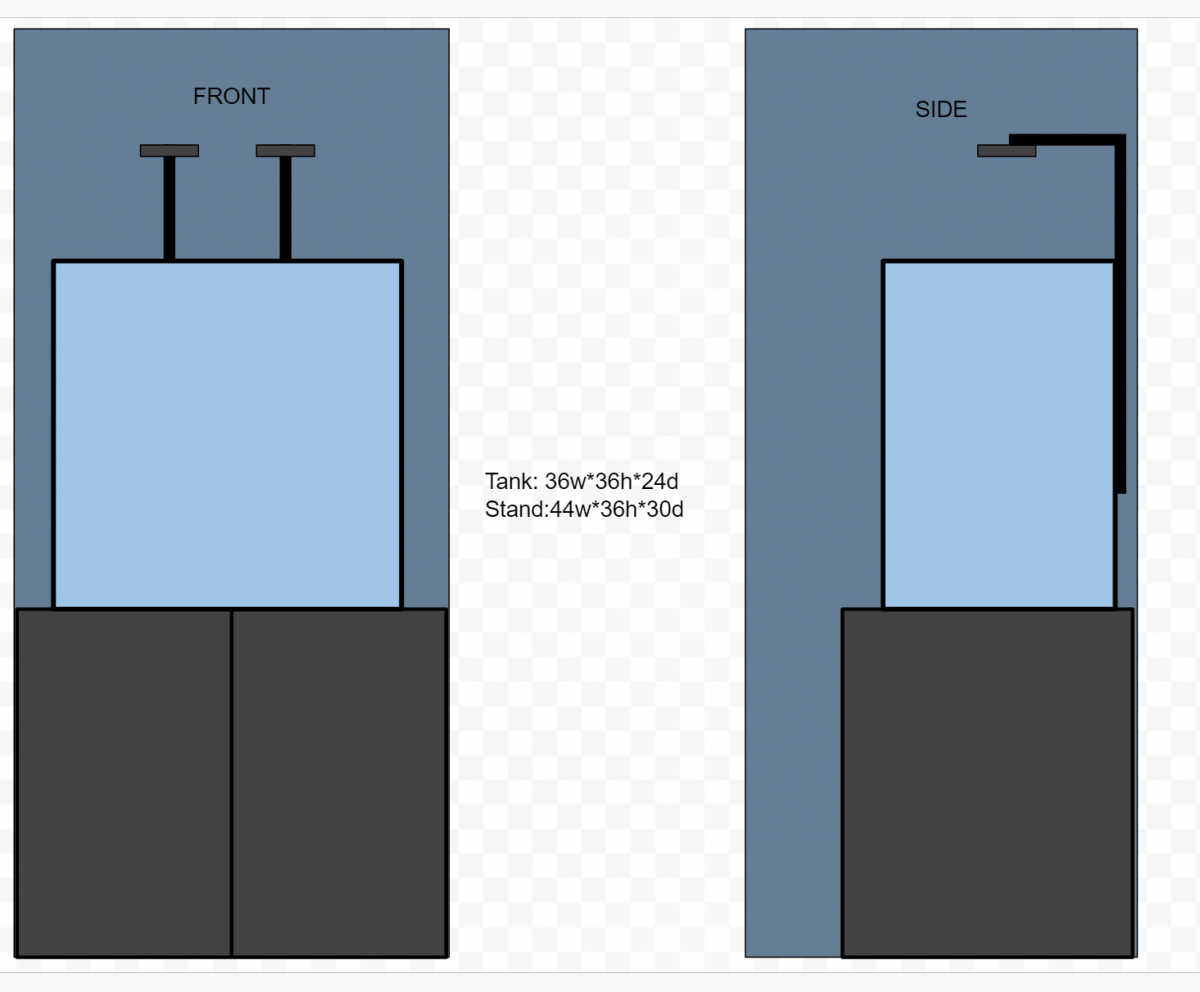 Part of my decision process in getting this tank over a 4ft tank is the issue of space. The wall that I am going to put this on is 45" wide (its a new wall at the base of a staircase in my basement). I wasn't able to keep my 75g because it protruded into the walkway, so, I am moving forward with this taller 130 in that space. I would like to make my stand as big as possible though, this is because I want as much room for equipment as possible, so by making the stand 44"wide, I can get a few extra inches of space in the sump area.

I don't know about lighting yet... that'll probably be one of the last things I get... I just put in some API Prime Pucks in my image... who knows what I'll end up with.


Right now the tank is not drilled or painted. I think I'm going to at least paint the back of the tank black, I'm not sure about drilling it though... I know it's not hard, but it makes me nervous. I think I'm just going to keep the HOB Overflow from my 75 and use it. I think it was the 800gph overflow with 2 drains. I do plan on using a sump with ATO for this build.

I'll probably also do a canopy at some point, but that will come much later.

As for stocking in this tank... the kids want Clowns, a Hippo Tang, Shrimp, anemone, and a urchin. Down the road I would love to have a mandrin dragonnet, I also love zoas and sps, but corals kind of scare me still. Maybe stick with Fish Only for a while before I start any corals?

Please feel free to ask questions or give me some pointers, I'm really looking forward to this build and documenting the process.

The only suggestion I have to offer is to spend some time planning your overflow, sump and plumbing. Do factor in the need to expand (UV, fleece roller, filtration, monitoring, etc.) as once you get fish and corals going it becomes anything but simple to adjust. Good luck!
OP

Please take a look at my DIY Stand thread I just posted.