Not a "Dream Tank"

Still working on the tank, here is a cool pic tho: 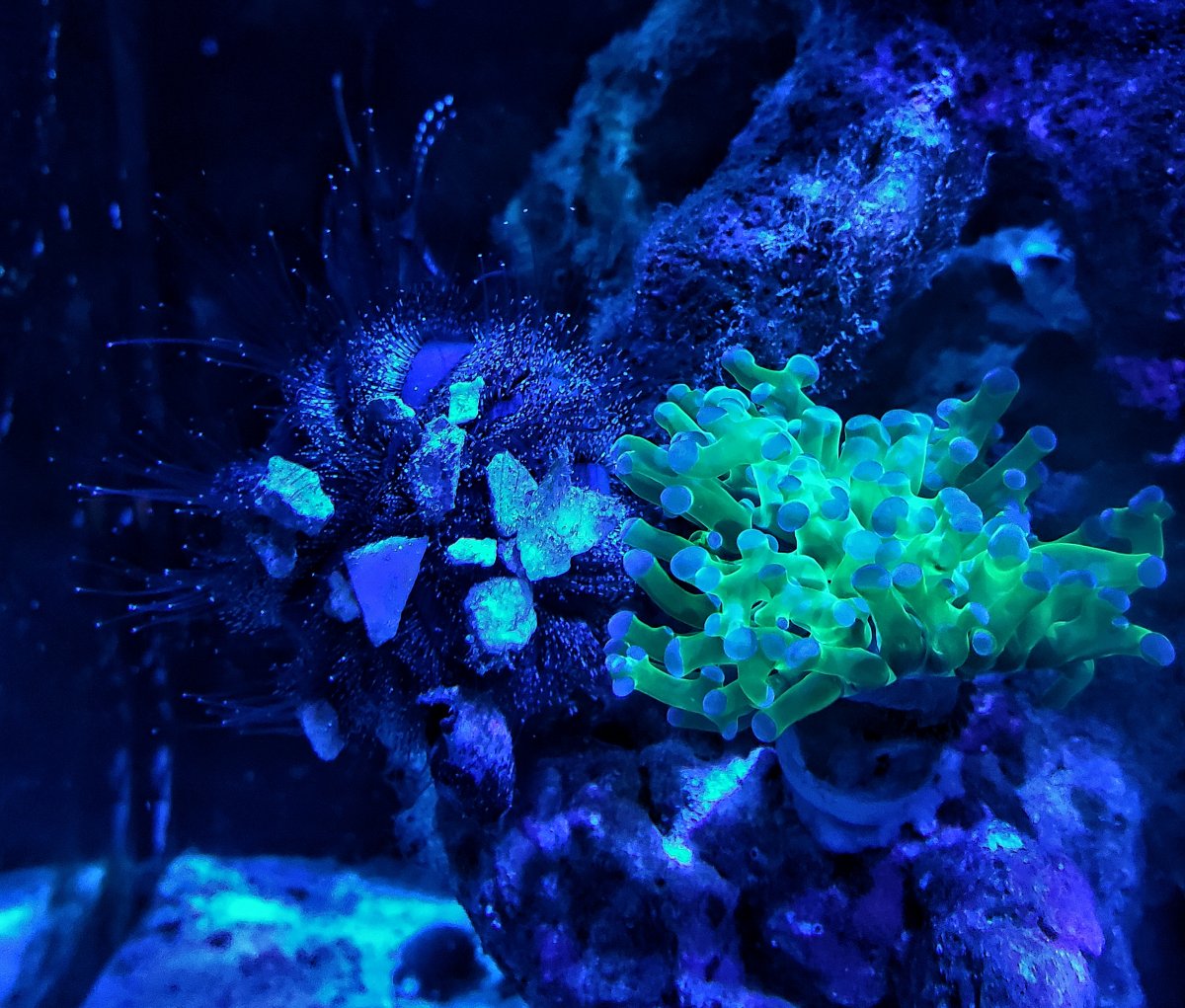 Today was a good day... I finished the new aquascape in the nano and I couldn't be happier. I only have zoas in there now and plan on keeping it that way for a while. Also, thanks to @Niam I gave my polyp lab orange filter another try and my photos look way better! 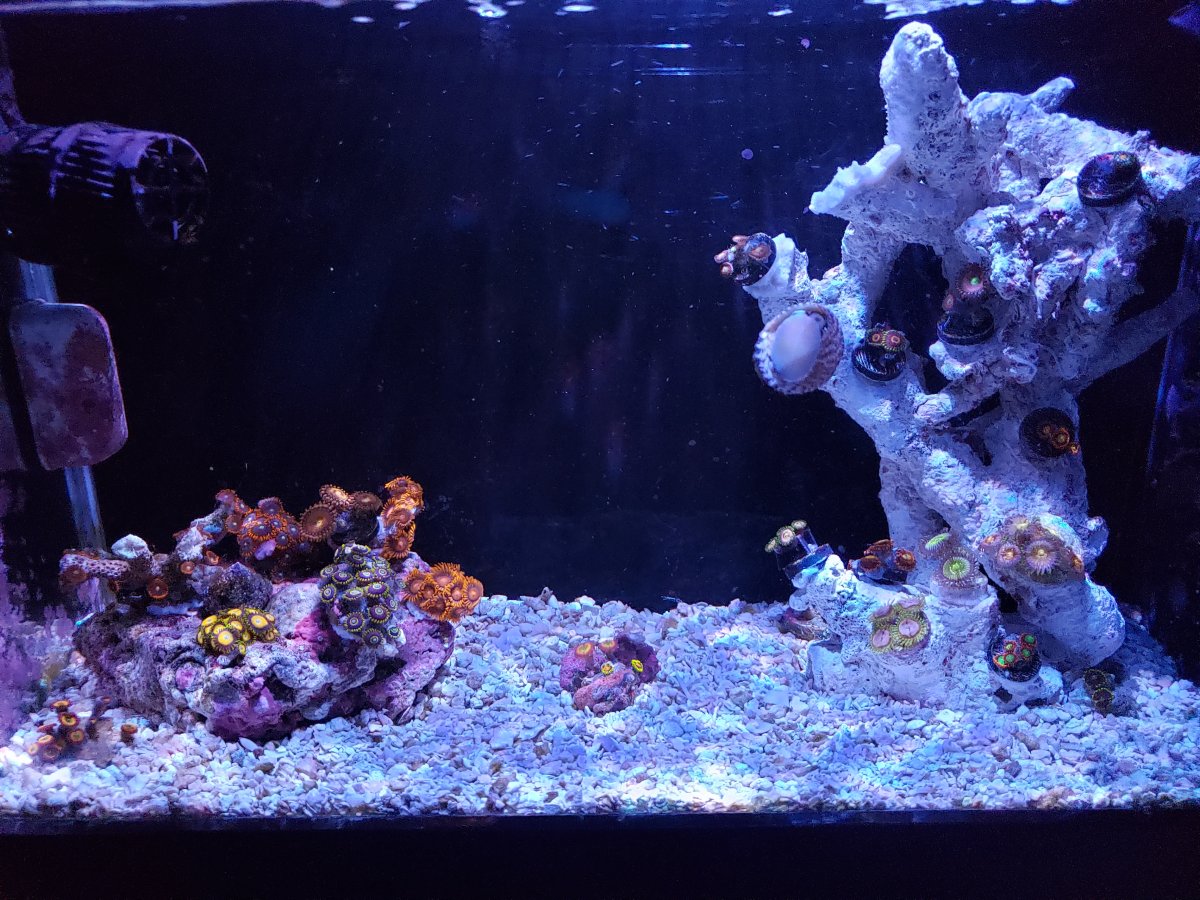 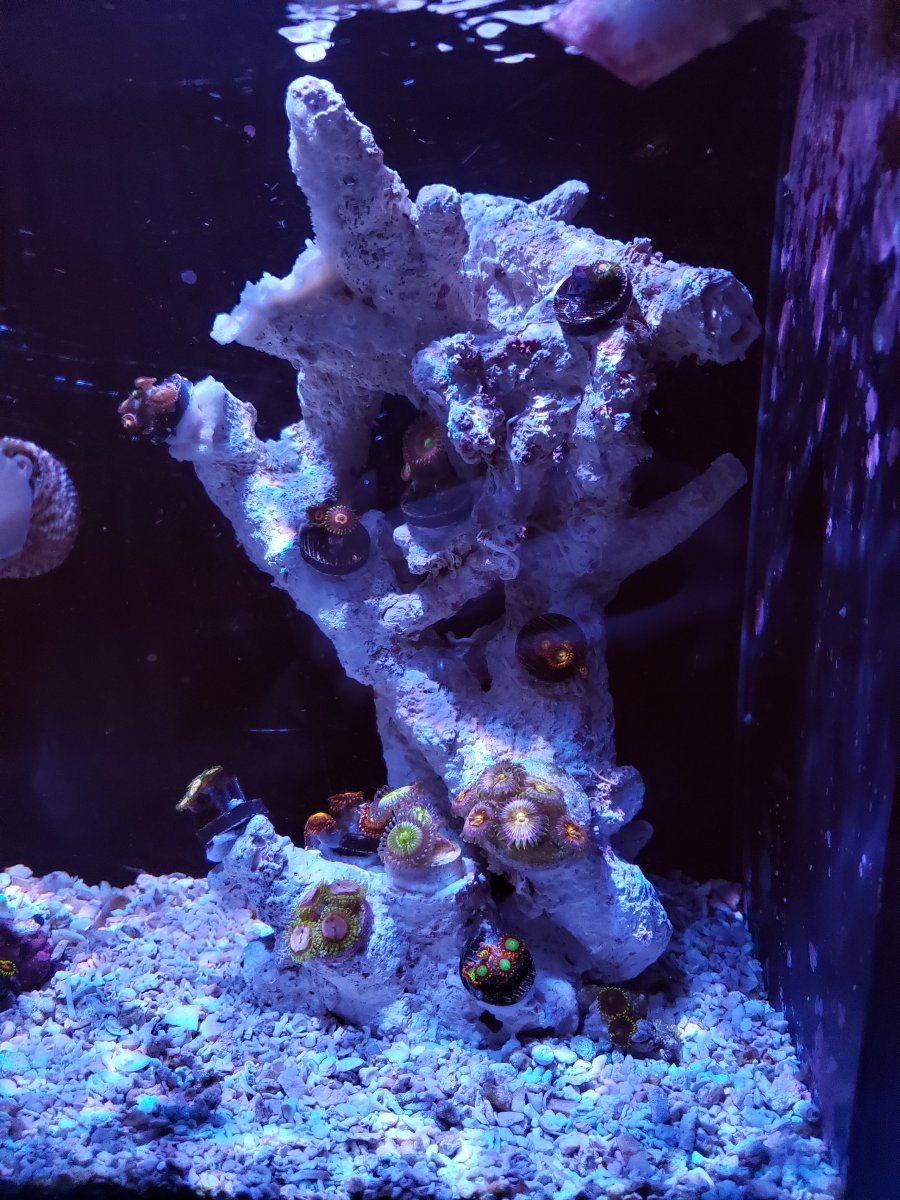 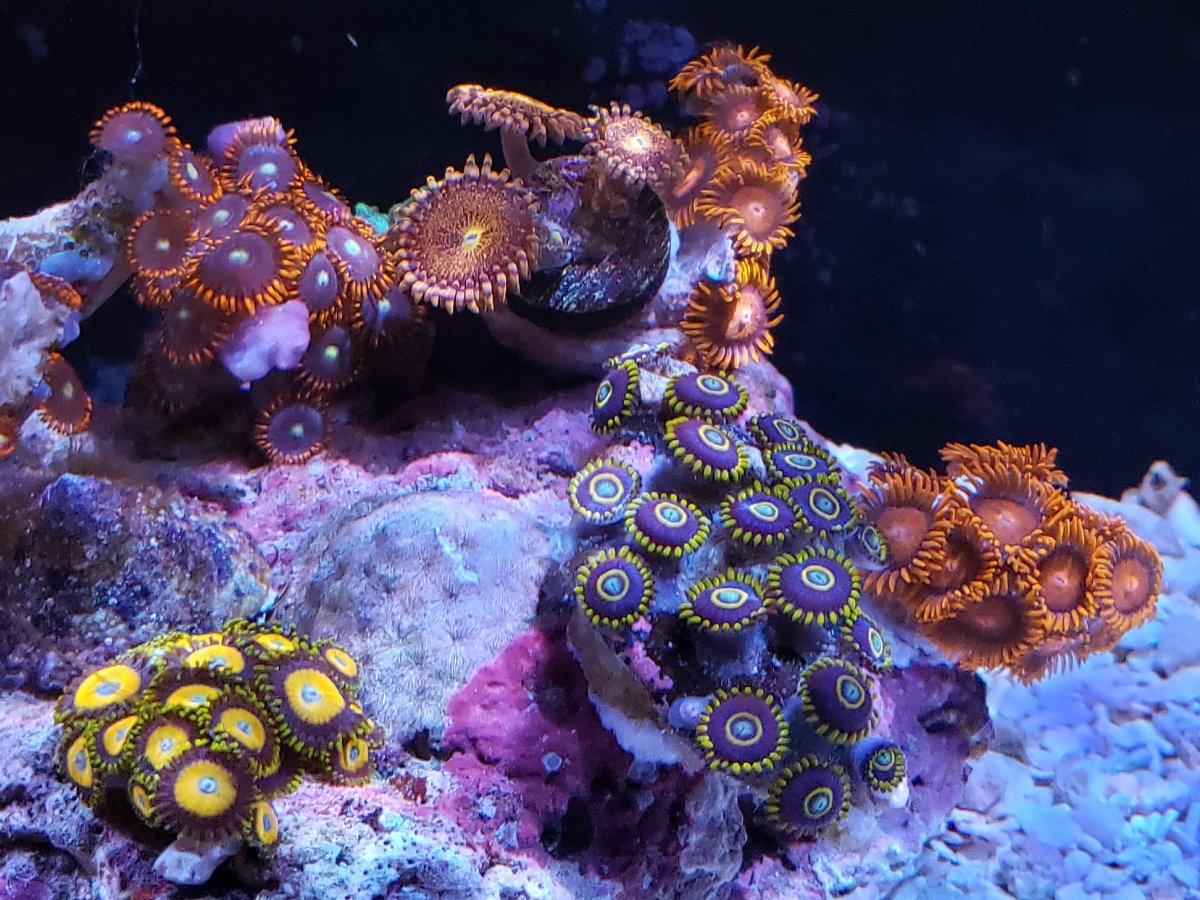 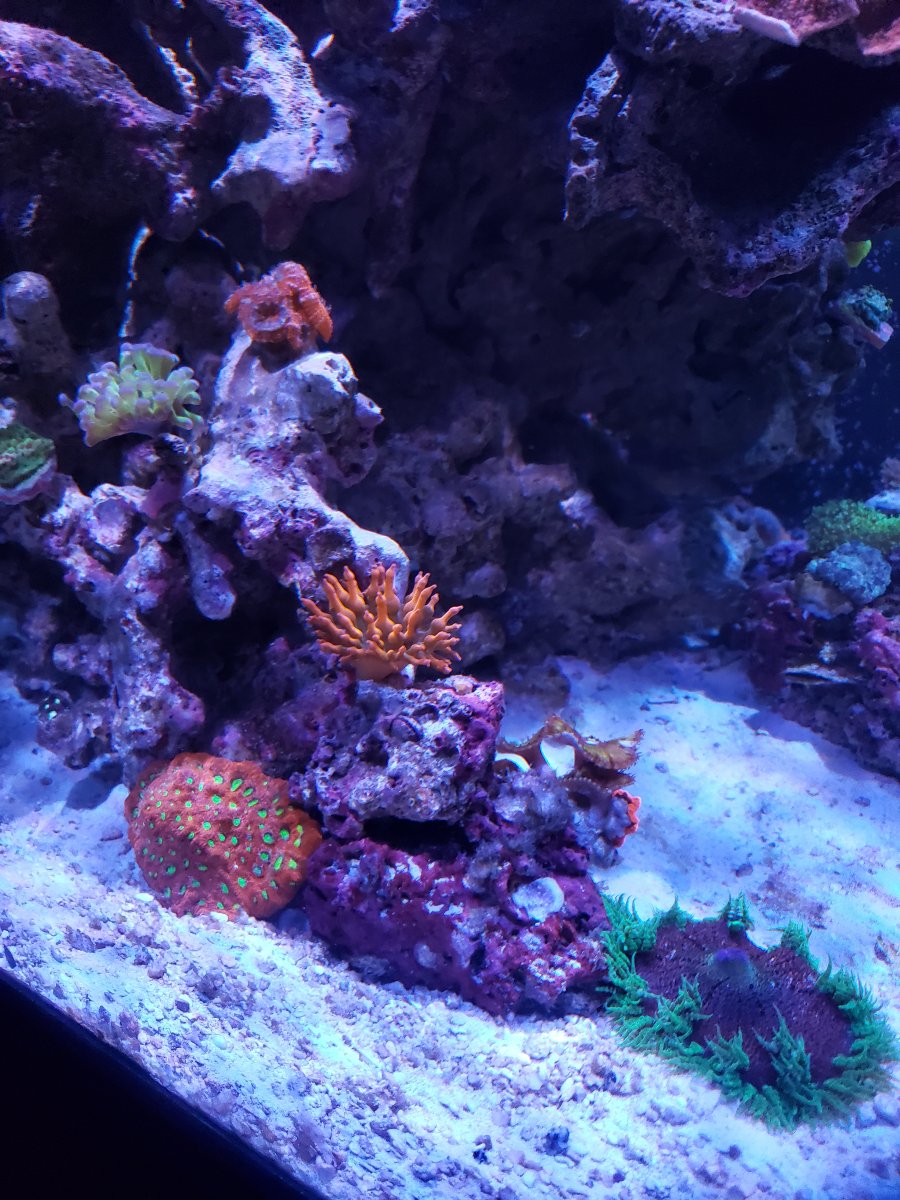 Also just found this, I had one that was a half depth shelf back in the day but lost it and forgot about them. Then after buying rack screws for the power strip this popped up on my Amazon ads. Will be perfect for my dosing pumps which are on makeshift wood shelves I made. 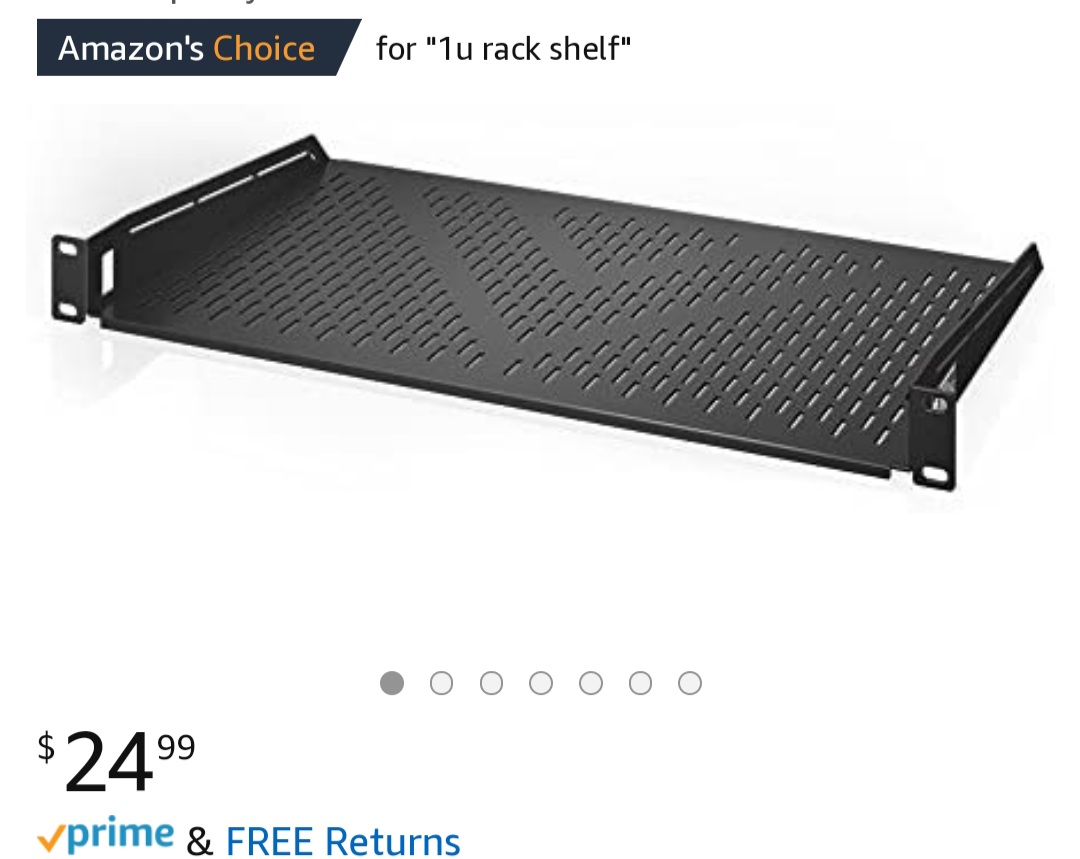 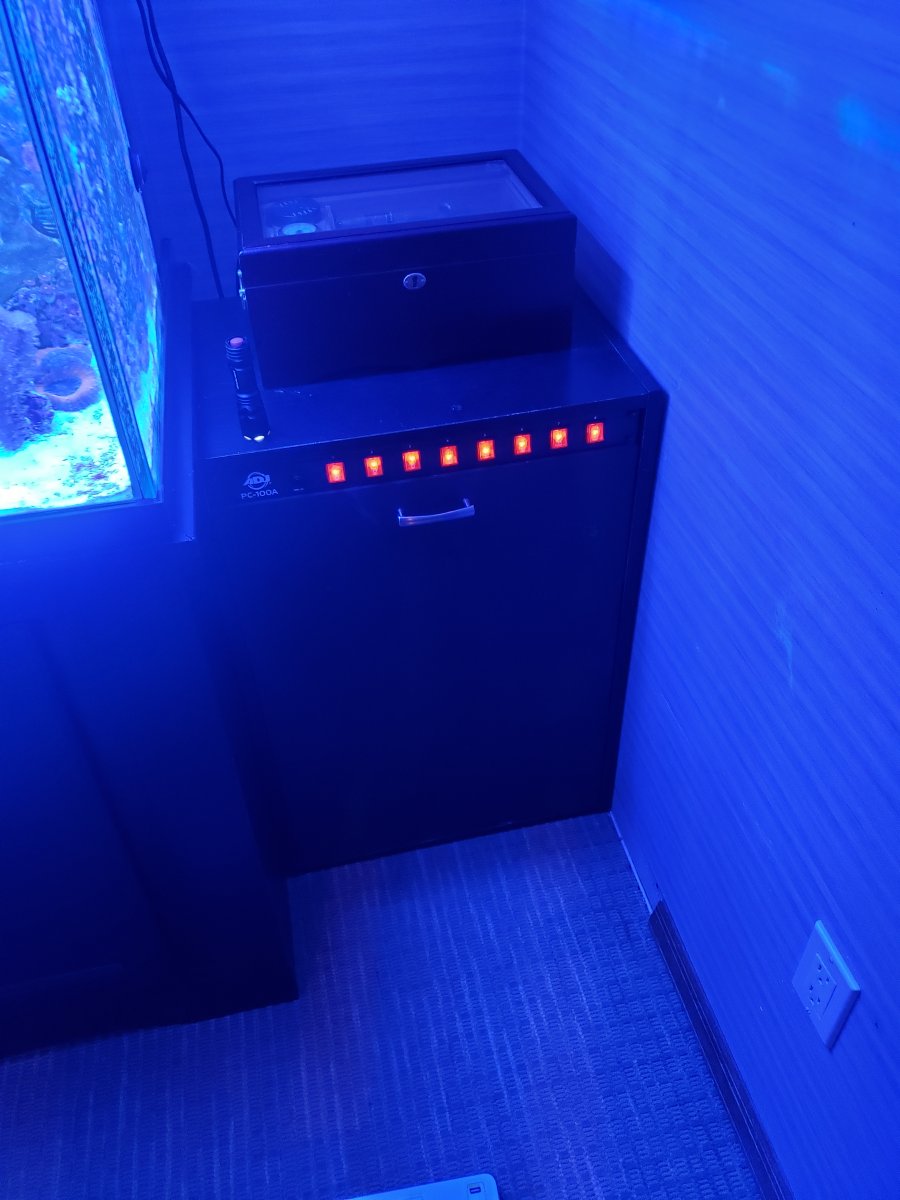 This past weekend I received an order from Indopacific Sea Farms for their mix and match package. Main things I wanted were the live sand activator and the wonder mud. But along with it I got a bag of pods, a bunch of micro hermits and micro snails, a bunch of wild looking red bristle 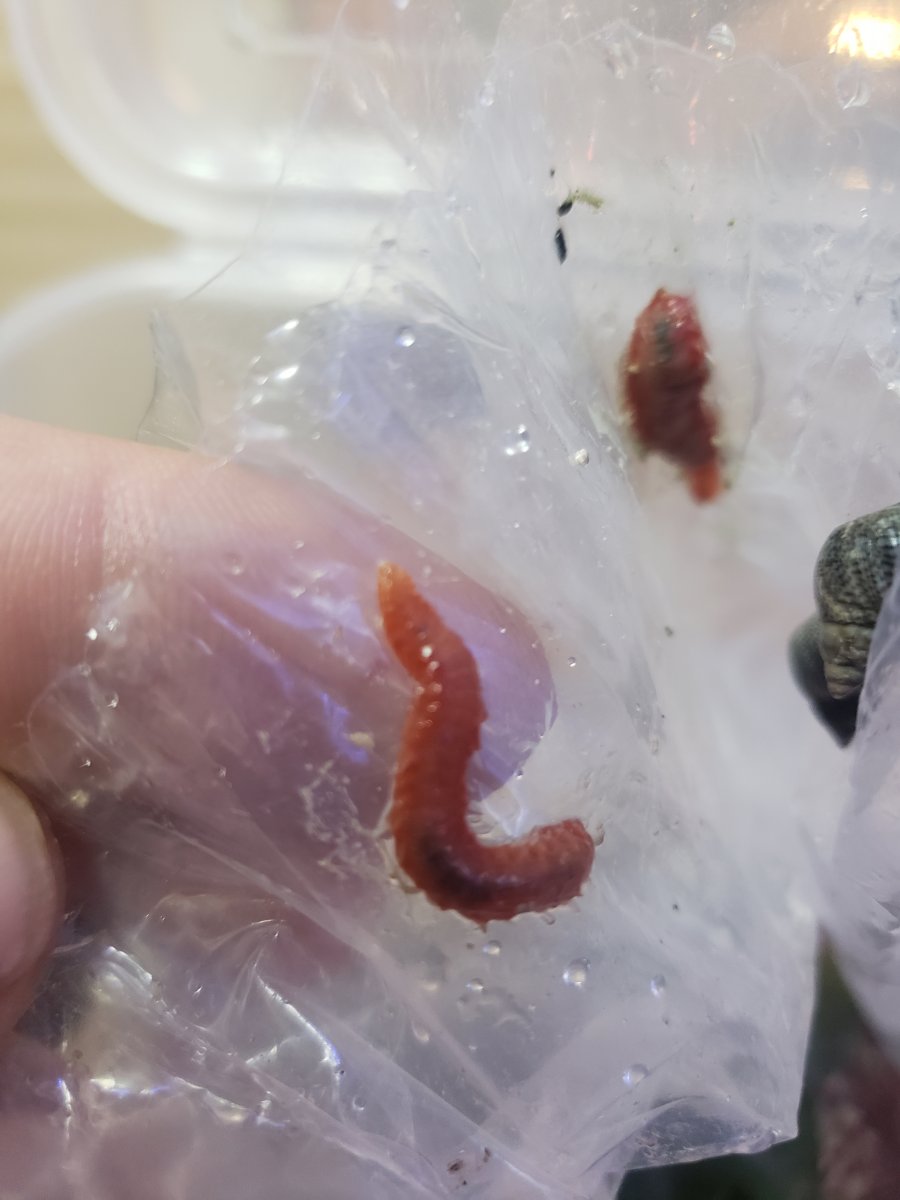 worms, some algae and a freebie neon blasto. The blasto is really nice too, I thought it was DOA but it looks great.

I also got a starter culture of white worms after reading all of Paul crap posts on them. It was a bit of a guessing game though because I wasn't sure how wet the soil was supposed to be, and what type of soil to actually use. But I went with what I had and tried my best. The turning point was a post he made recently that described how to wet the soil by running water slowly through the container then draining it through a net with some squeezing after to get the rest of the water out. I did it and thought I messed everything up, there were worms still in the container that I washed away into the sink. The soil seemed too wet, and I thought there was no way this would work. But I cut up another net and put it on top of the soil, then a few wetted dog food pellets on that (I don't have a cat) and put it in the closet. Forgot about it for 2 days and when I looked again I was shocked to see most of the food gone lol. Been putting pellets on it every couple days now and sure enough the worms come up and make short work of them. I'm going to keep at it for a few weeks and see how many I have then. Here is what the starter culture looked like:

Also picked up a female green spot mandarin last week, 10/221. Poor thing was pretty skinny at the store, but she has been doing really well in the nano. Looks great around the zoas too lol. I'll move her to the DT one day after she puts on more weight and I get her eating the white worms. 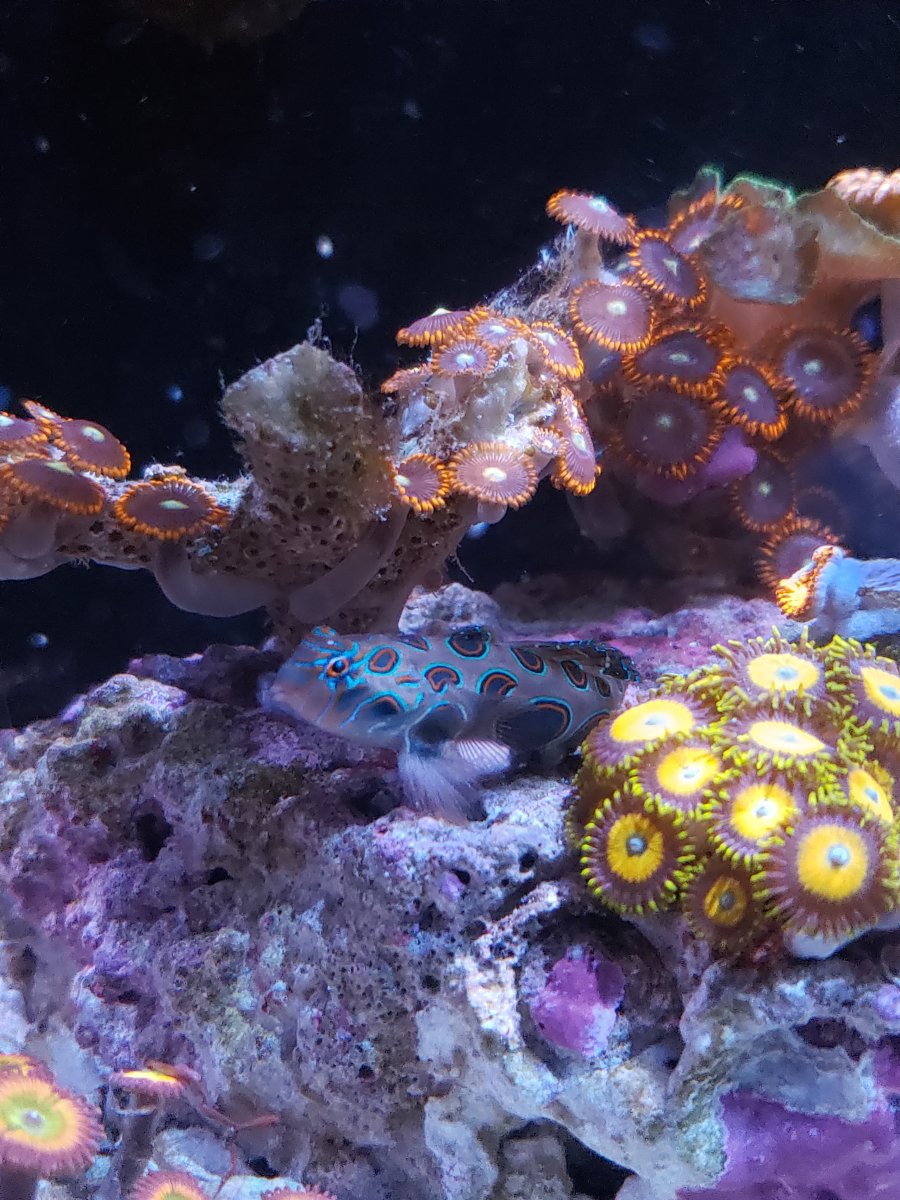 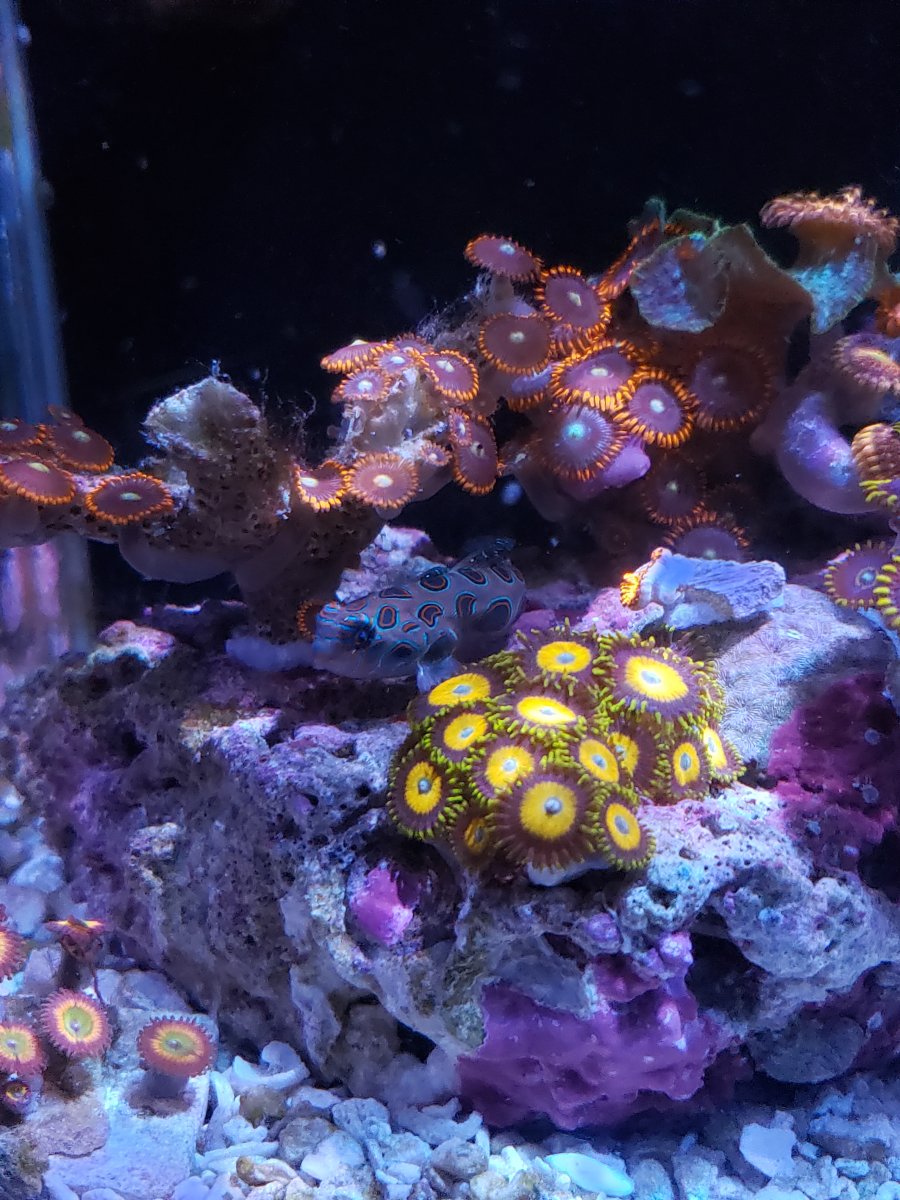 Did you plumb the nano tank into the same sump as the dt ?

Are you Draining I into its sump
Are you using a second return pump on the nano ?
OP

What the heck?!? I just reread my posts and for some reason it says "Paul crap posts" and I thought that was weird. It should say "Paul crap posts". So I figured it was a weird typo but then I went to edit it and in the edit post it's correct... I wonder if it will do it on this post too. 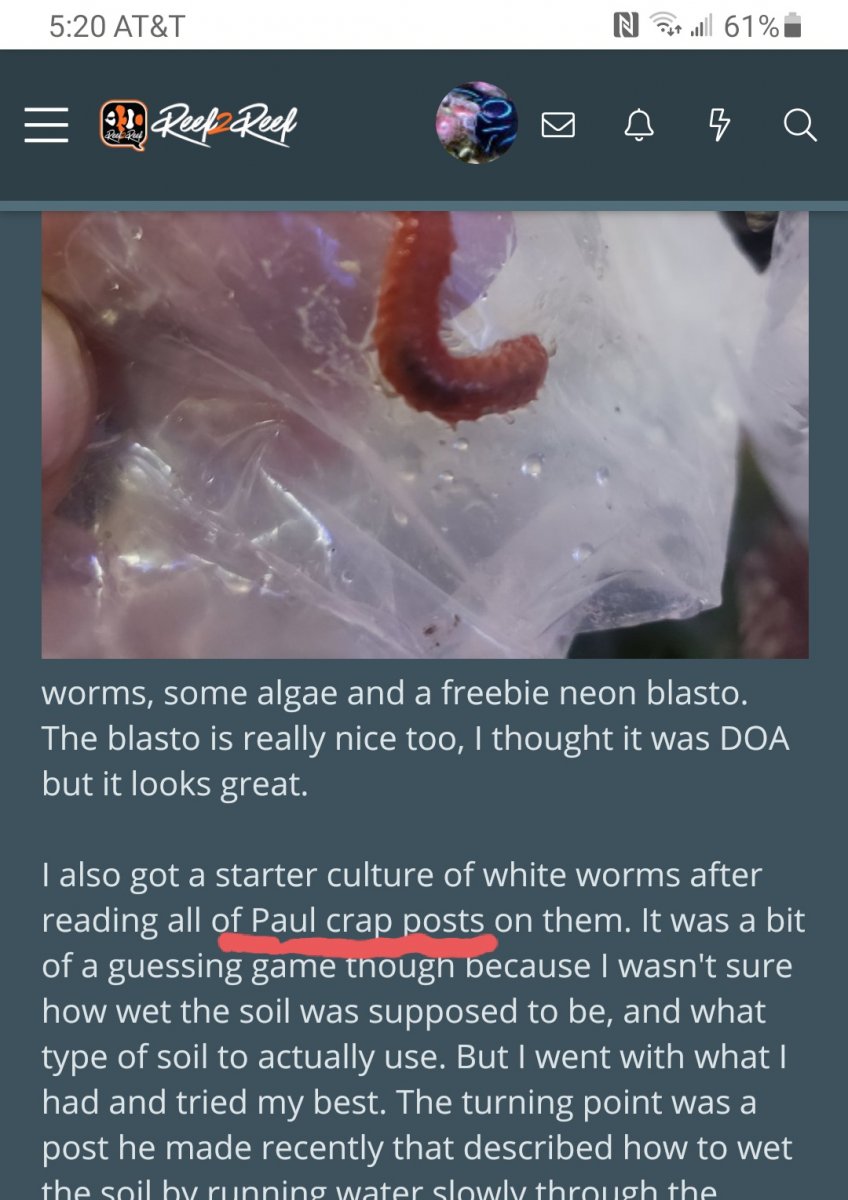 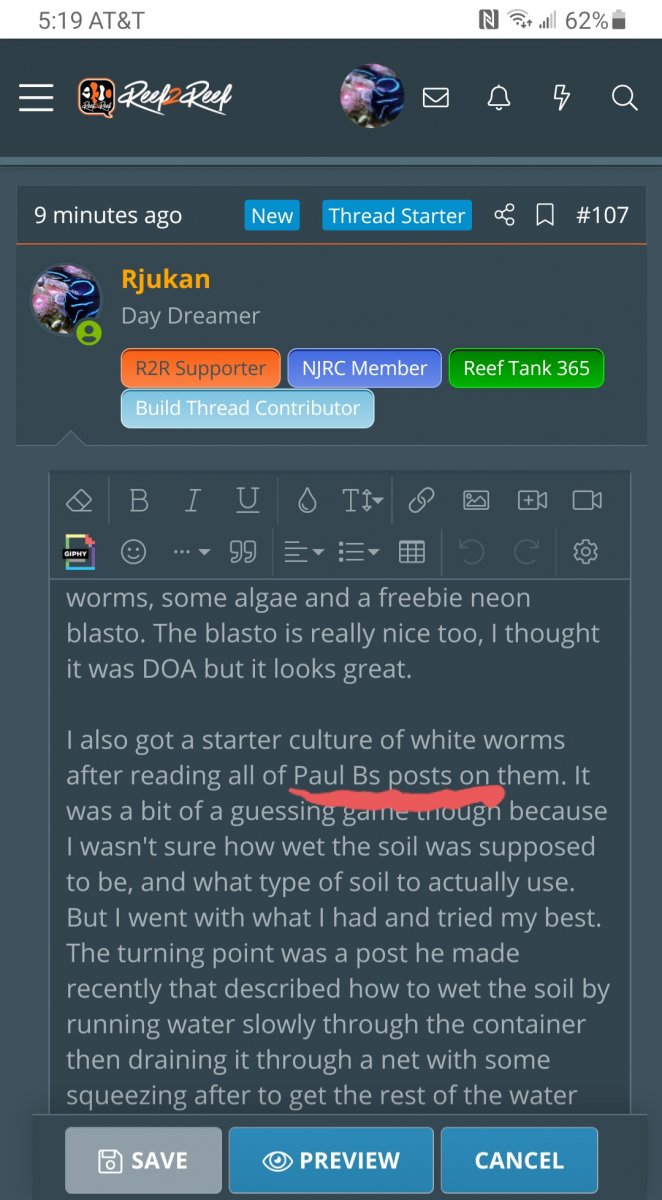 Oh I figured it out lol, its a bad word filter. Paul B's will work but the other was corrects to crap

rapid said:
Did you plumb the nano tank into the same sump as the dt ?

Are you Draining I into its sump
Are you using a second return pump on the nano ?
Click to expand...

Hey, unfortunately you didn't take a couple min to look at the rest of the build thread. I understand, it's not a dream tank so why bother.
Yes, it's all one system.
Yes, it's draining into the same sump as the 60g.
Yes, it has it's own return pump.

Rjukan said:
Hey, unfortunately you didn't take a couple min to look at the rest of the build thread. I understand, it's not a dream tank so why bother.
Yes, it's all one system.
Yes, it's draining into the same sump as the 60g.
Yes, it has it's own return pump.
Click to expand...

Haha, I'm sorry. It's just that such few people have taken the time to look at this thread, and I thought your comments were based solely on bashing the mandarin in a nano tank.

Yeah I went about it a couple ways. First I wanted to let the nano gravity drain to the DT, but I didn't put the shelf high enough to have a steep enough pitch to drain to the DT. I changed that after a few months so it would drain to the sump directly.
OP

bits of silicone 'chipped' off - is it ok?