Somehow I’ve gone this long without a build thread on R2R, which has been where I spend the most time on as of late.

I’m Ben, an SPS nut from MN. I’ve been reefing for ~15 years from when I came to the dark side quickly after trying out Cichlids. After a couple triggers and puffers a man overheard me discussing live rock with a friend at a gas station and said he’s into saltwater and I should come check out his systems some time. A week later he sent me home with some pulsing Xenia and that was all it took. Within a year I discovered the allure of growing reef-building corals and have been hopelessly addicted since. I had a thriving mixed reef (see below) until I moved into a cool apartment I later found to only have 1 15a circuit for all of the outlets so I tore the tank down and took a break. Then LED lights became viable so I started up a 32g AIO tank that has evolved a few time to my current tank. It was ugly and never really thrived until I built a 40 breeder setup with T5 and a skimmer. That lead to this when I ran out of room. 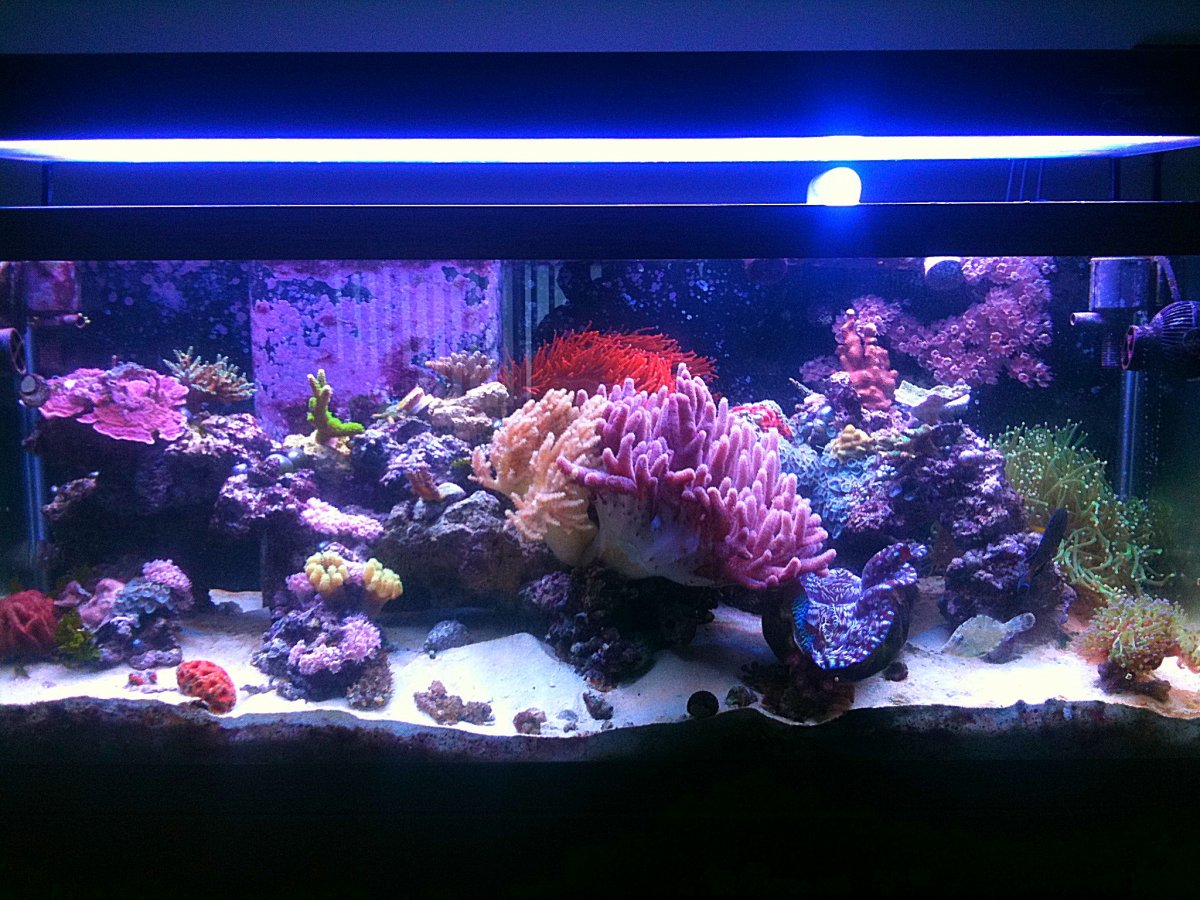 I call it old school as I employ all the equipment and technique that gave me former success. I’ve tried a few newfangled things that have only lead to headache so I’ll stay the course. A modified Berlin setup- weekly water changes, T5 lights, strong skimmer, strong alternating flow, and as much German equipment as I can afford has always given me success. Years ago I ran DSB but now I have a thin sand bed I vacuum regularly and replace portions of throughout the year.

The only parameters I aim to have exact are Temp, Alk, and SG as I feel these are the most important. Everything else I have an acceptable range.

I’ve tried a variety of ATI bulb combinations with similar results. I used to prefer UVL bulbs as they gave me ***** success with VHO but you can’t get them these days unfortunately.

Fish
I would like more but I seem to have a peaceful hierarchy now and I really loathe the QT process so here we are.

Coral
This list is more so I can keep track.

Pics:
All iPhone unfortunately. I own a Nikon DSLR and should probably pony up for a macro lens and a porthole. I’ll include some of the build and the 40 that sat on the stand before the current tank. I built the stand to accommodate gadgets behind the tank and plumbing but it allowed for a bigger tank eventually 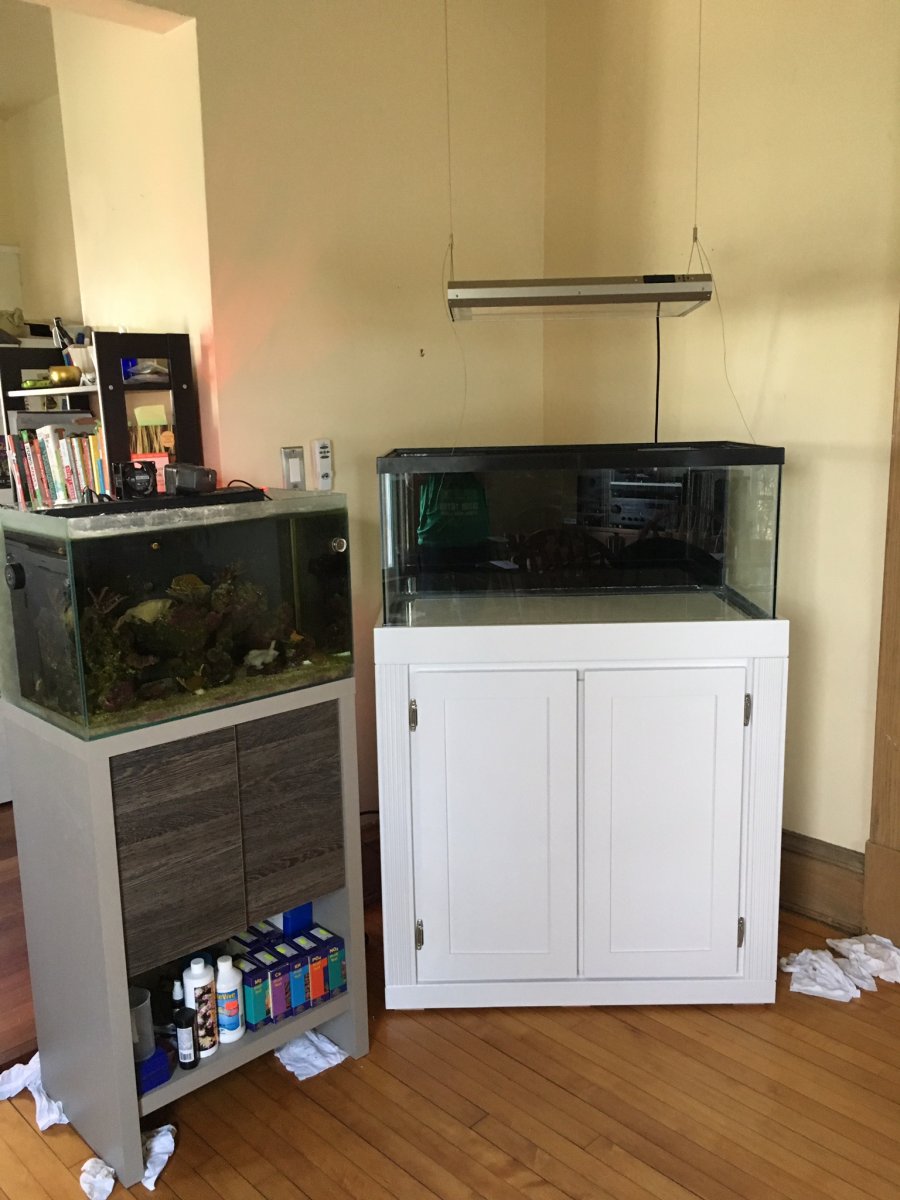 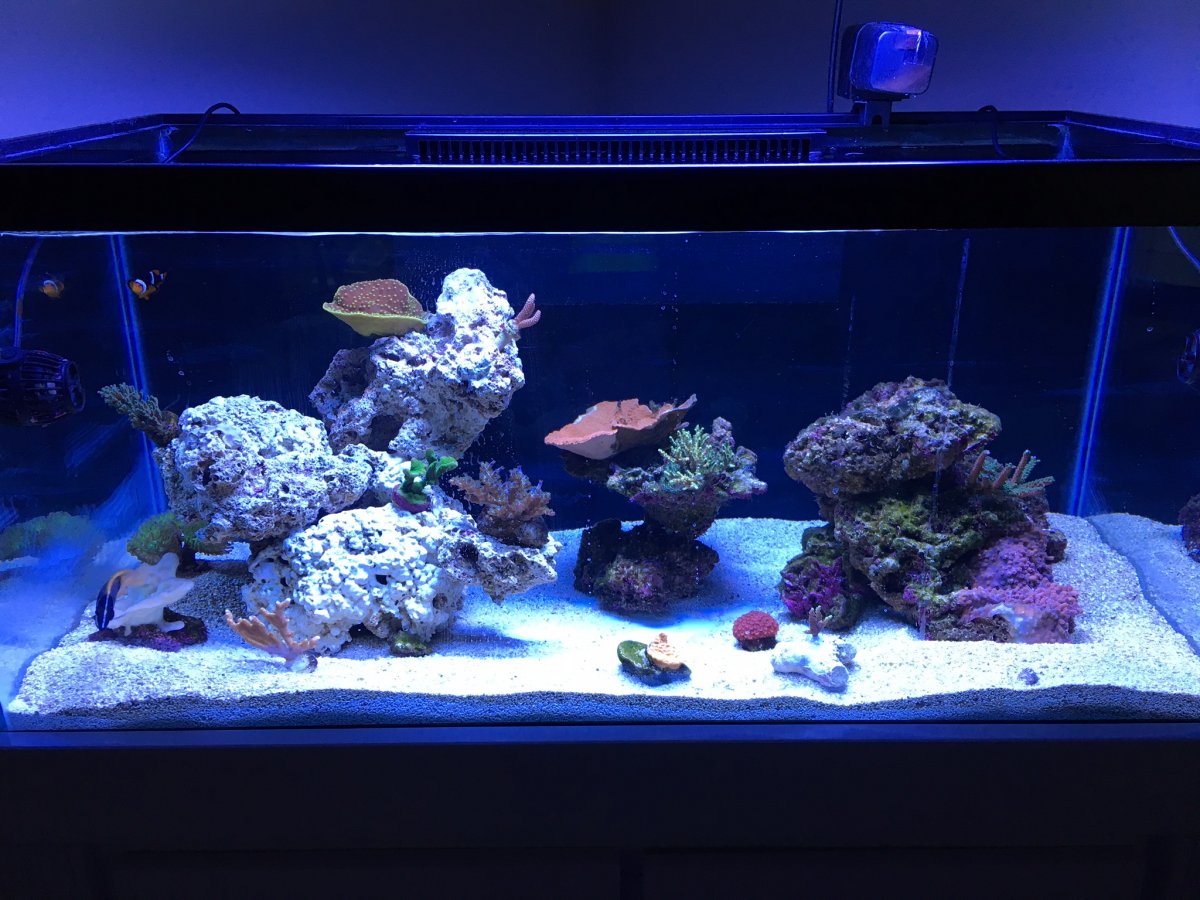 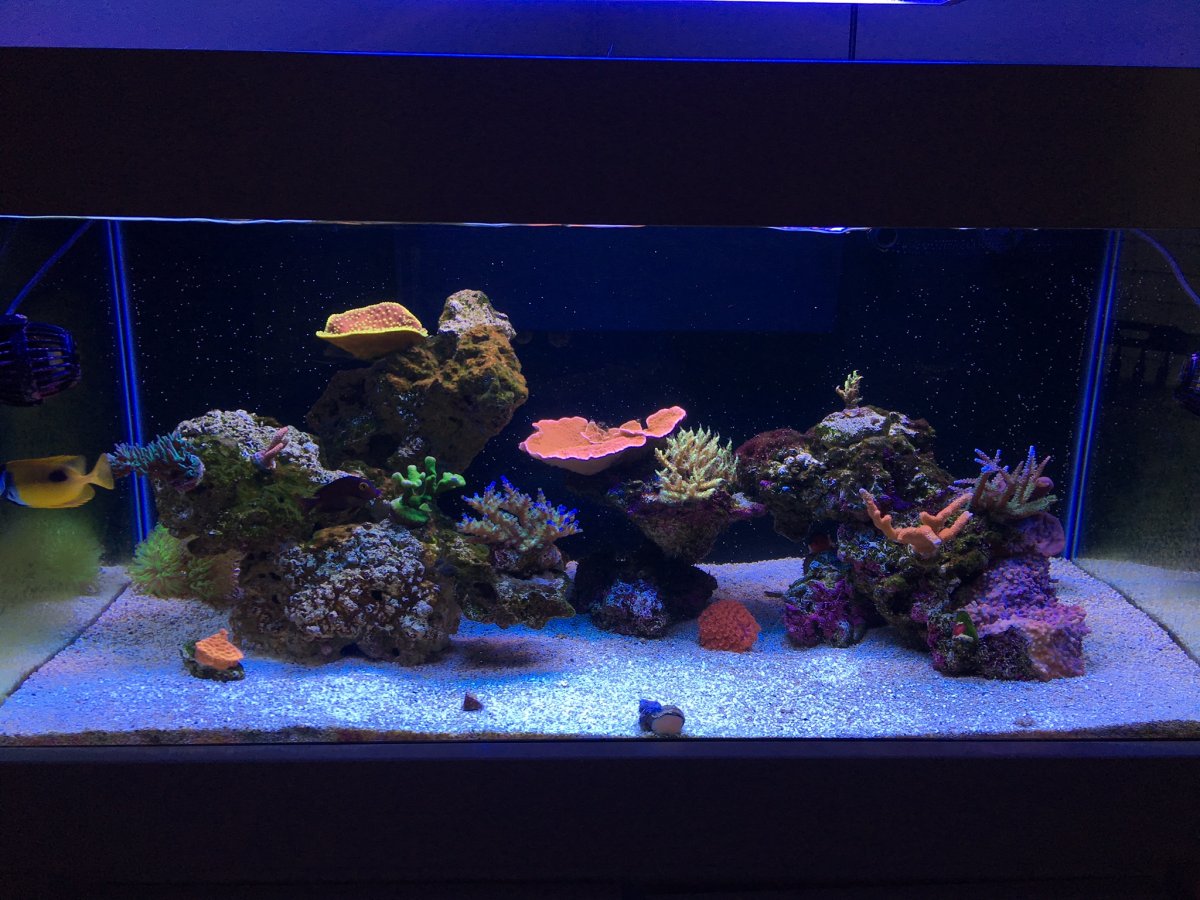 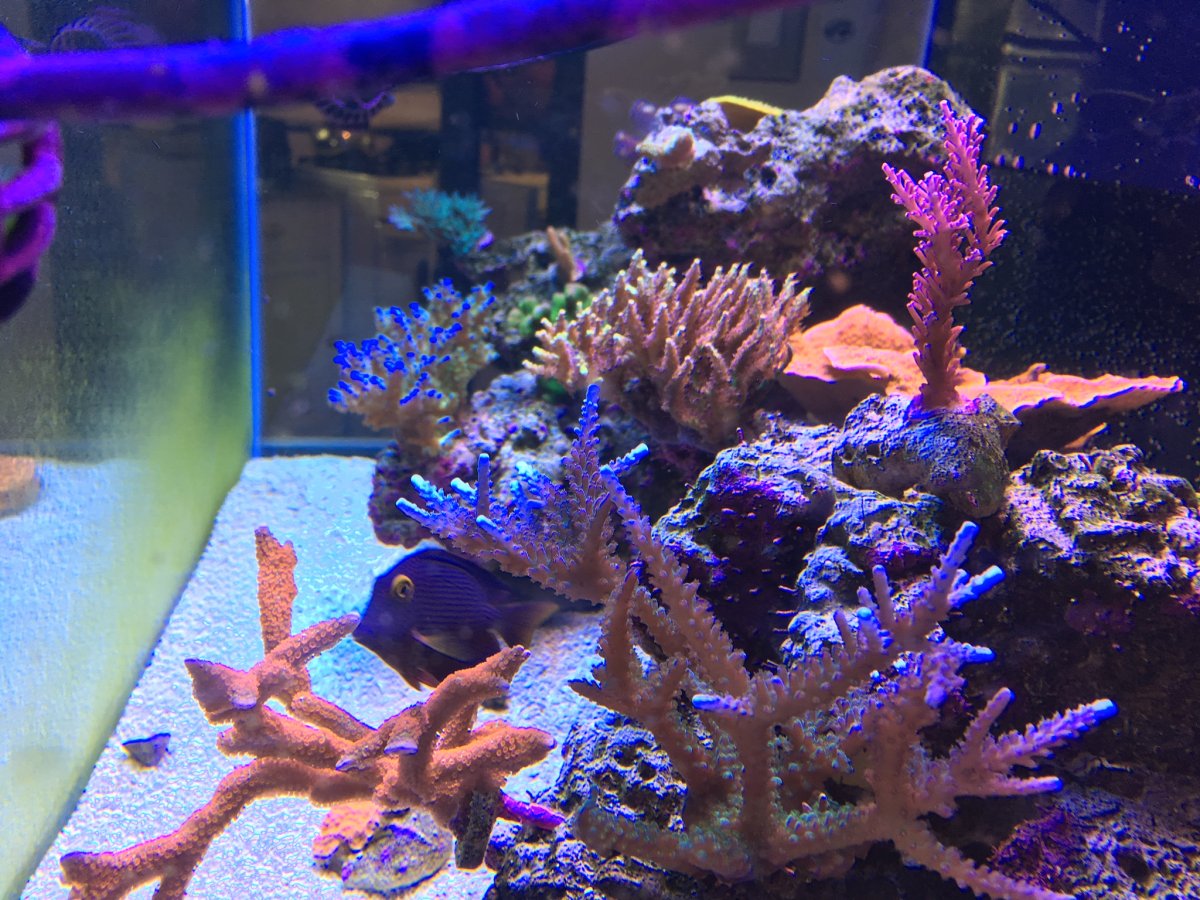 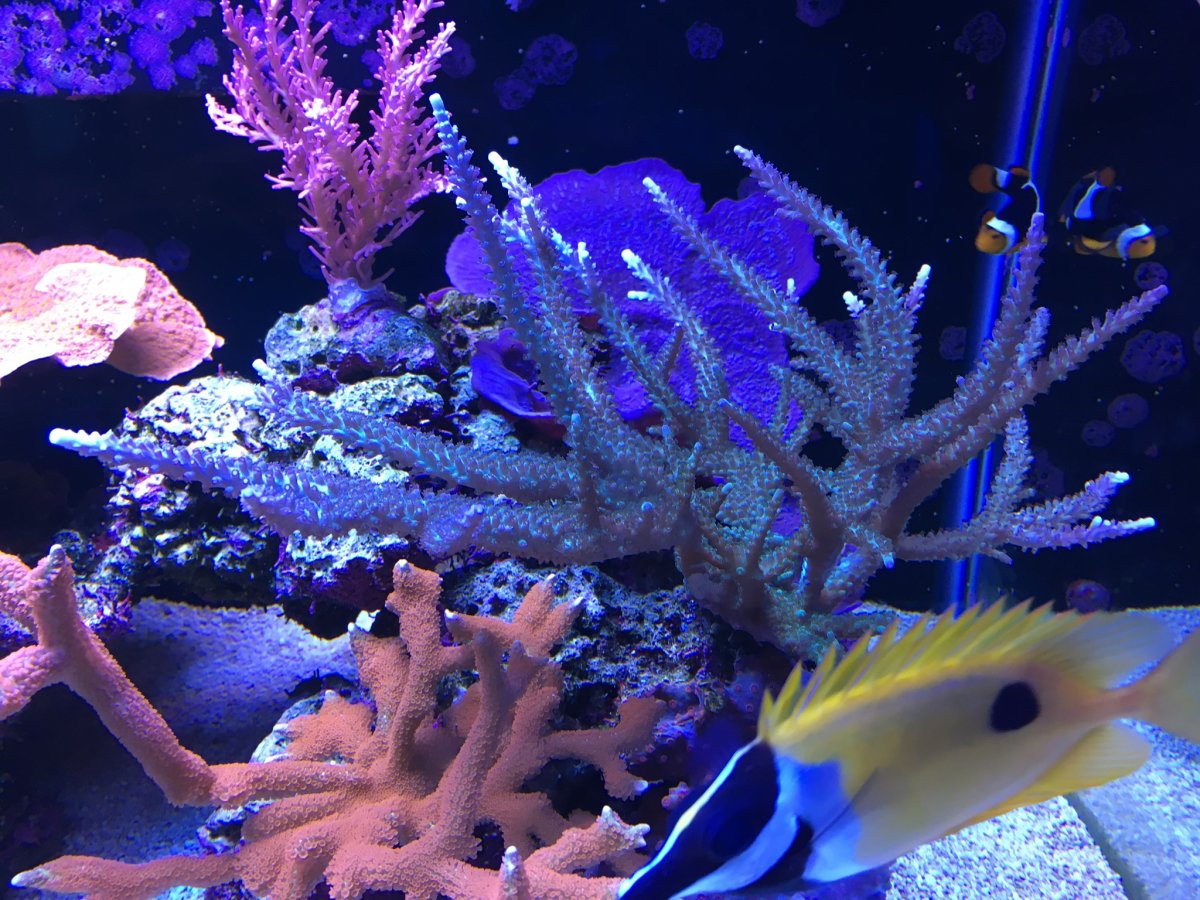 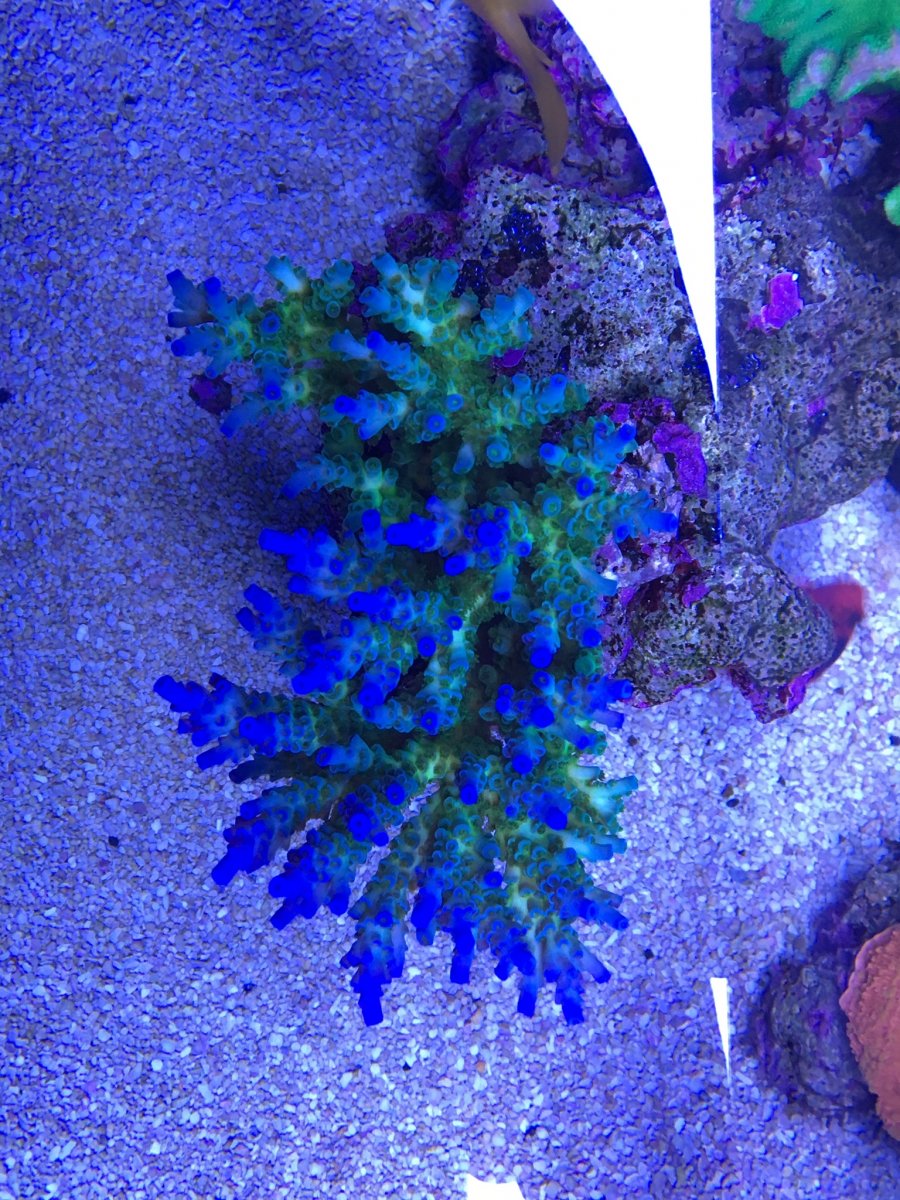 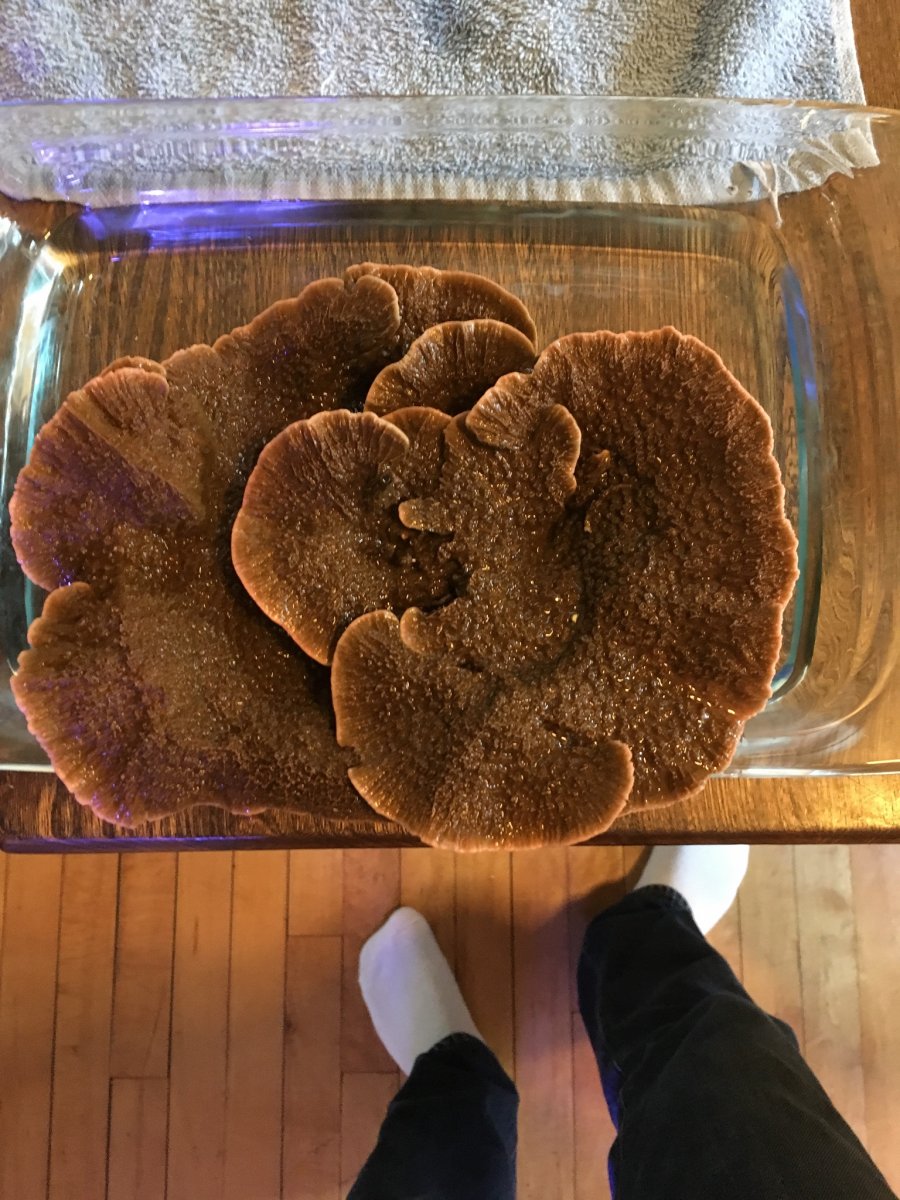 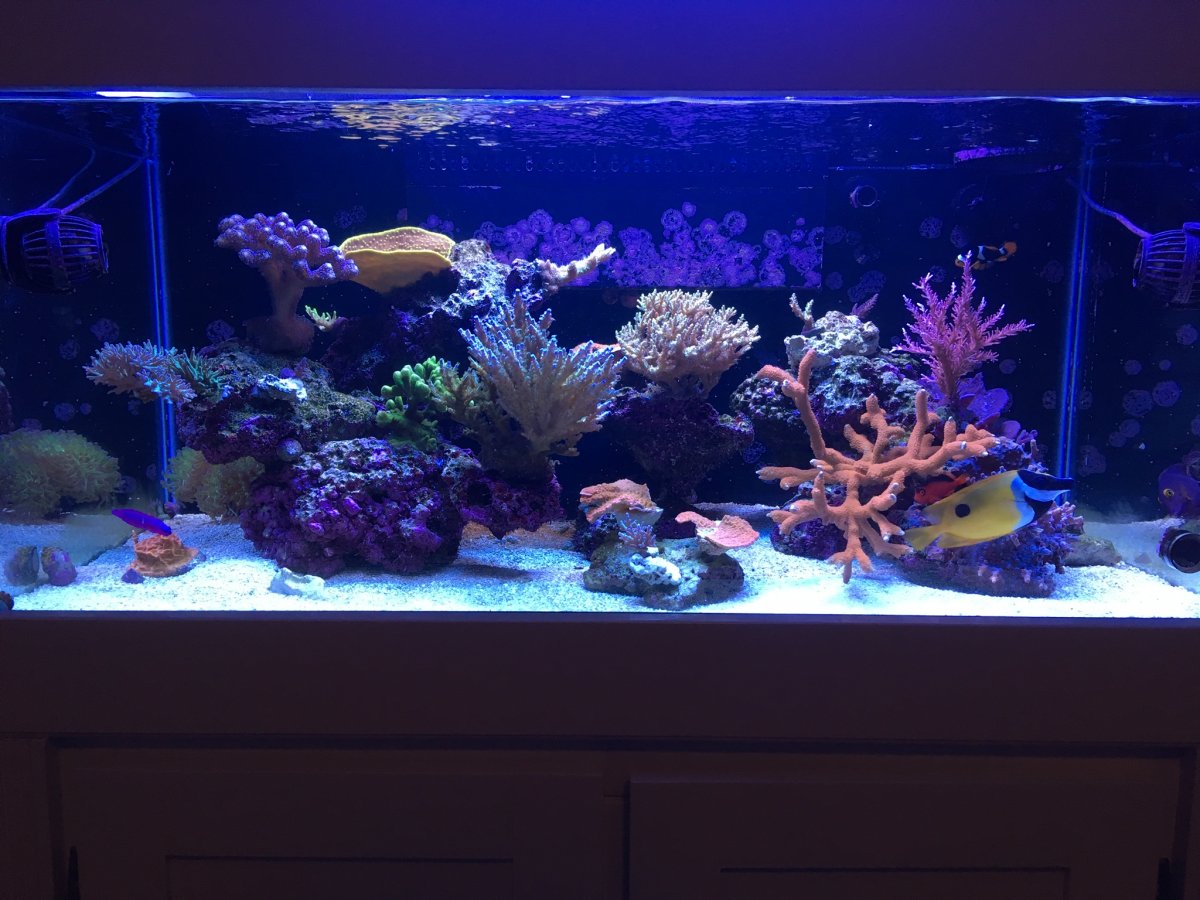 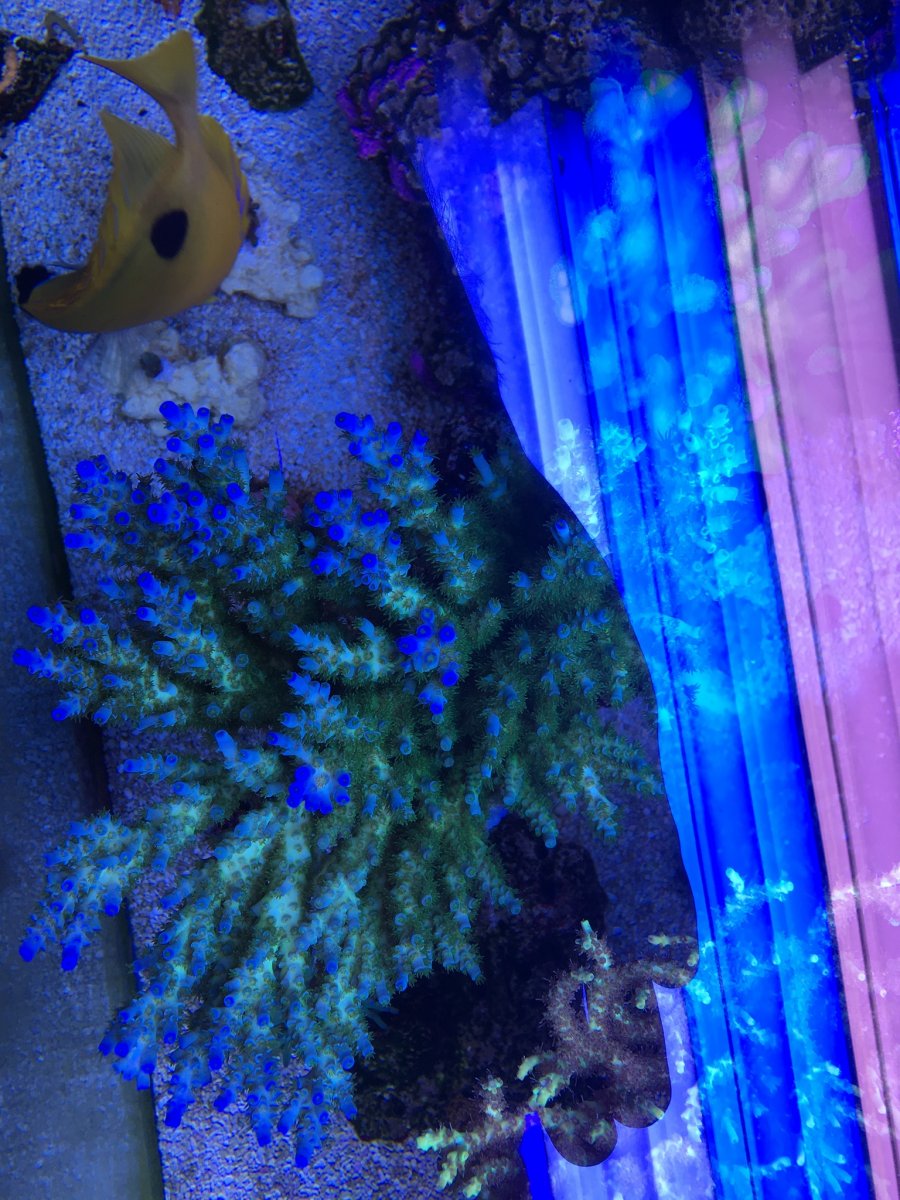 8/11/18 added a controller “board” aka PVC sheet from Home Depot, larger ATO reservoir, and just a system shot. Top rim is removable for tank access. 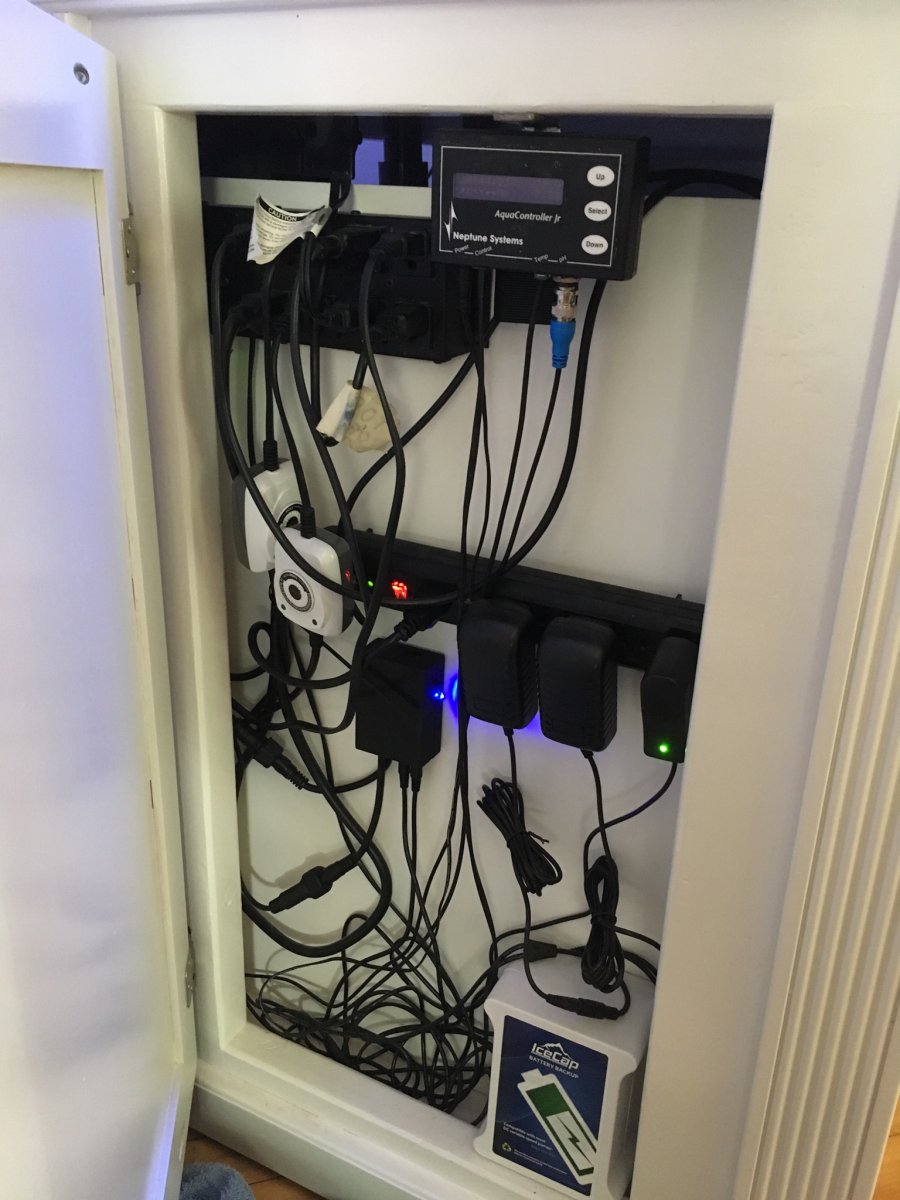 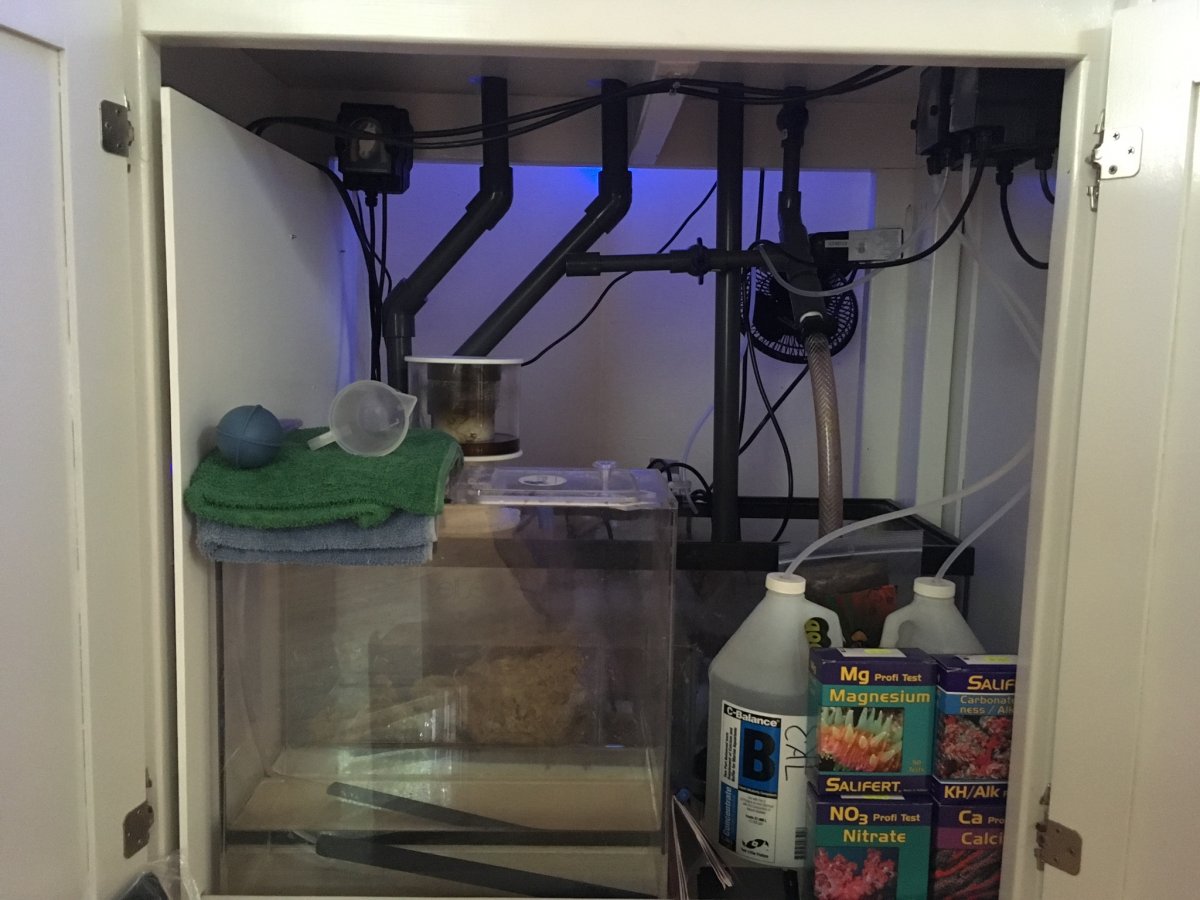 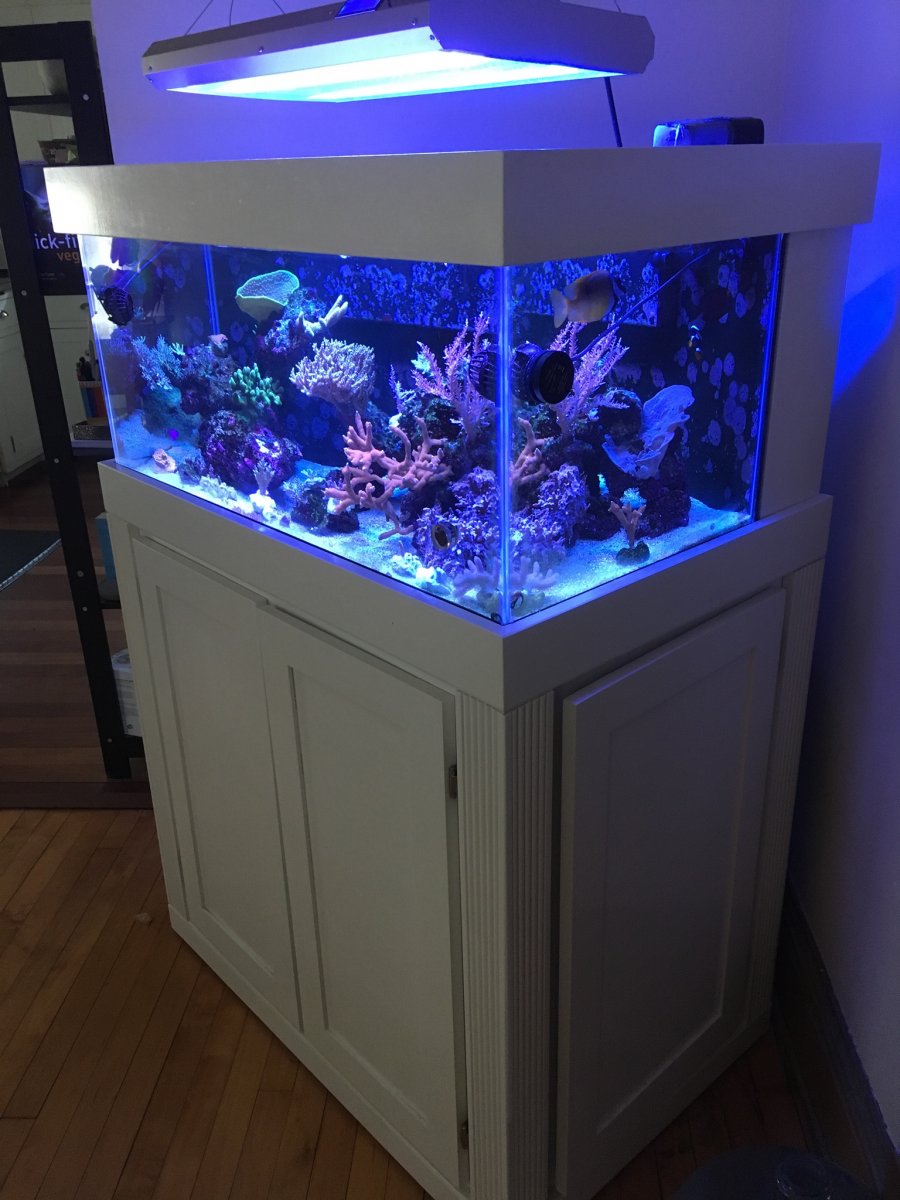 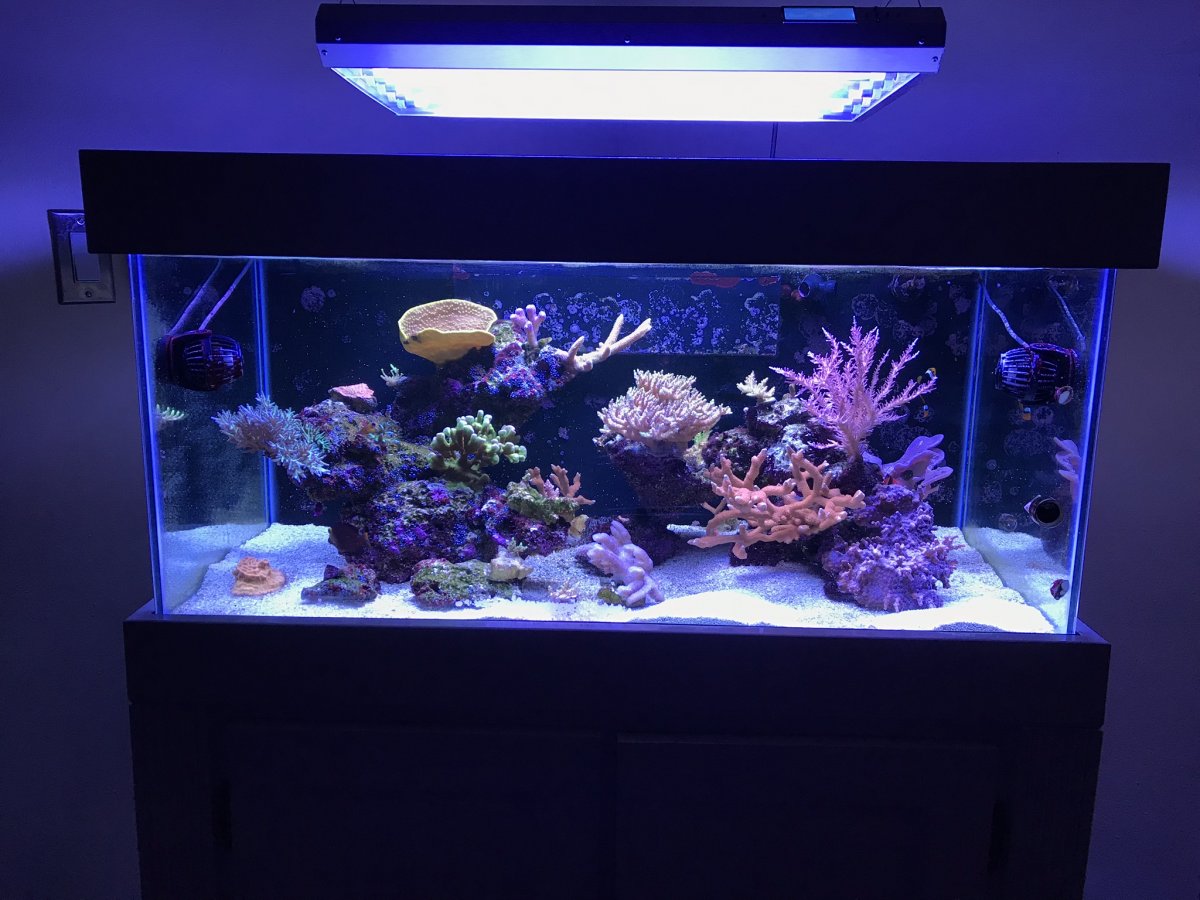 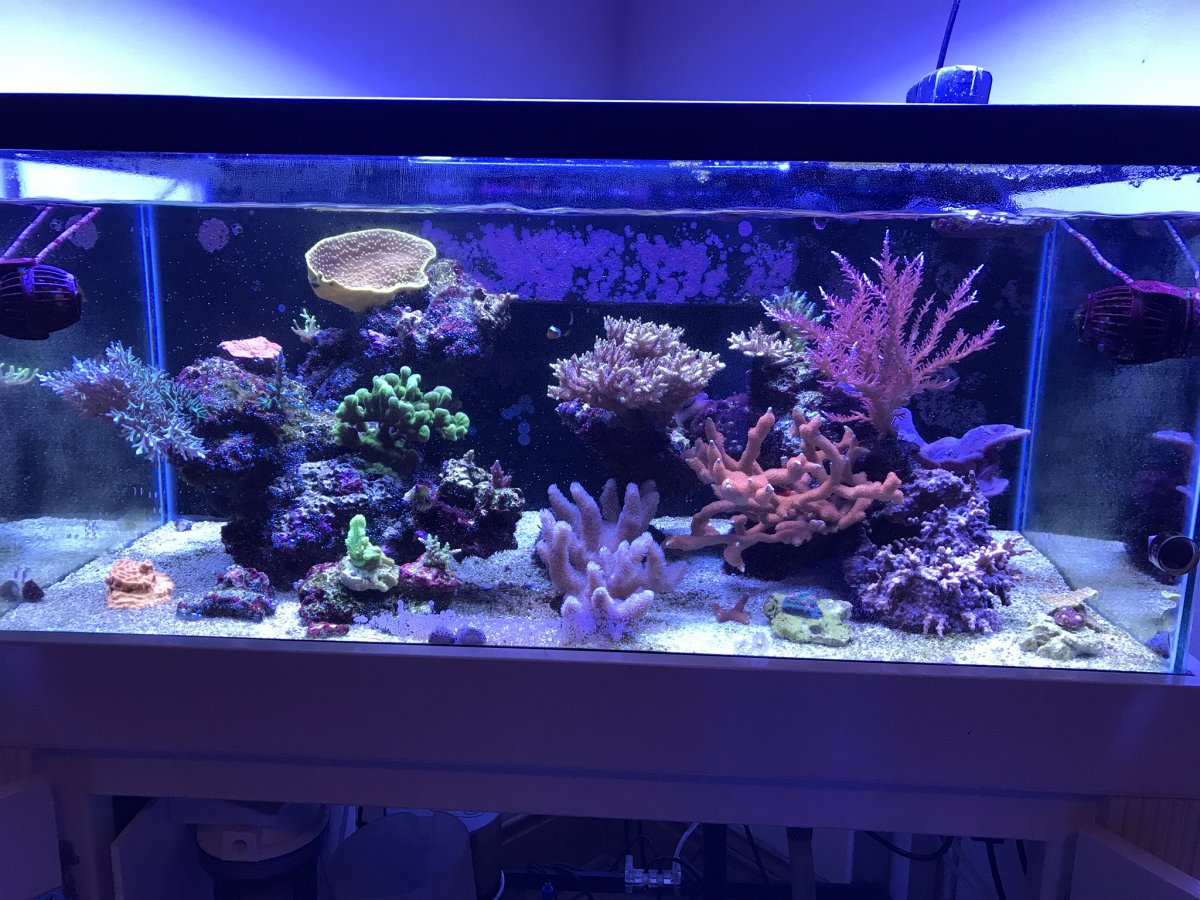 New tank and sump. I hate the blue back and regret ordering it vs/ black. 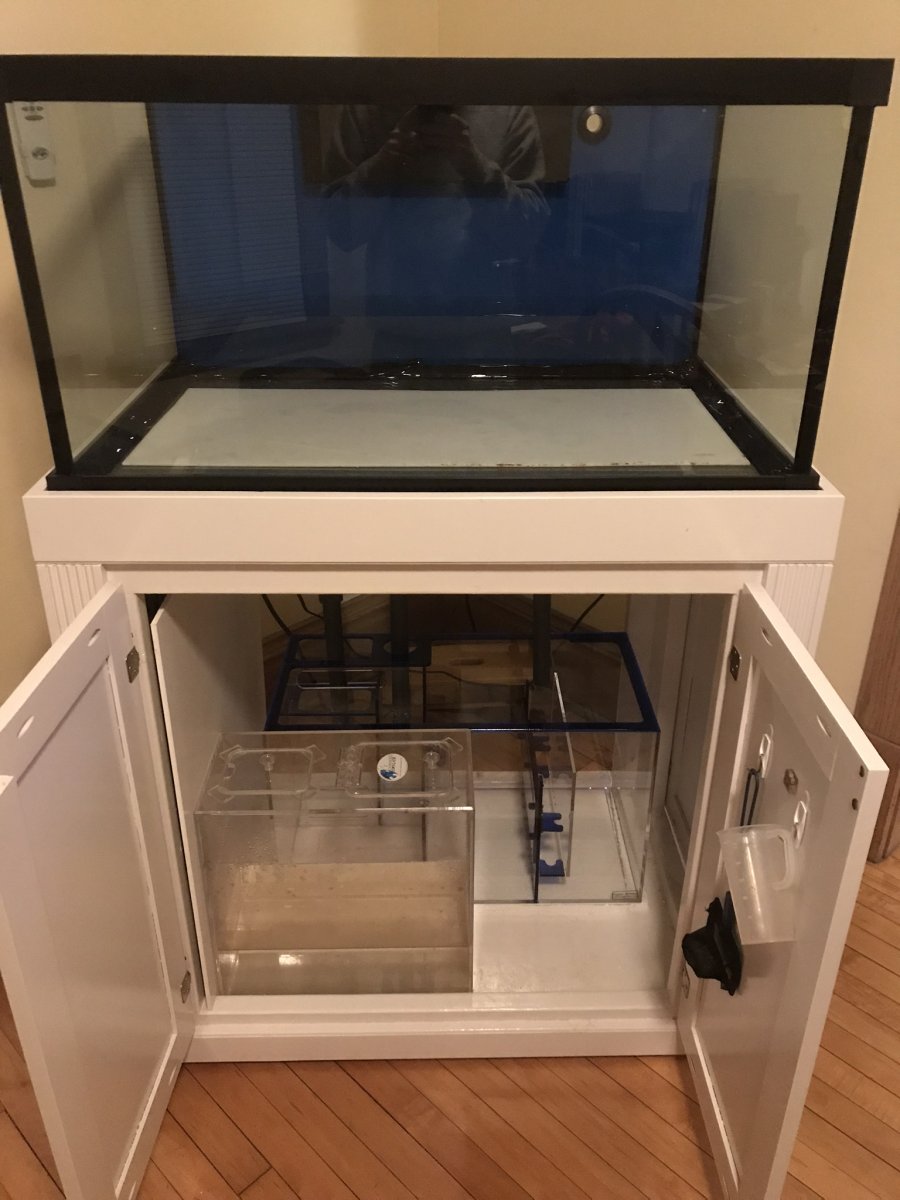 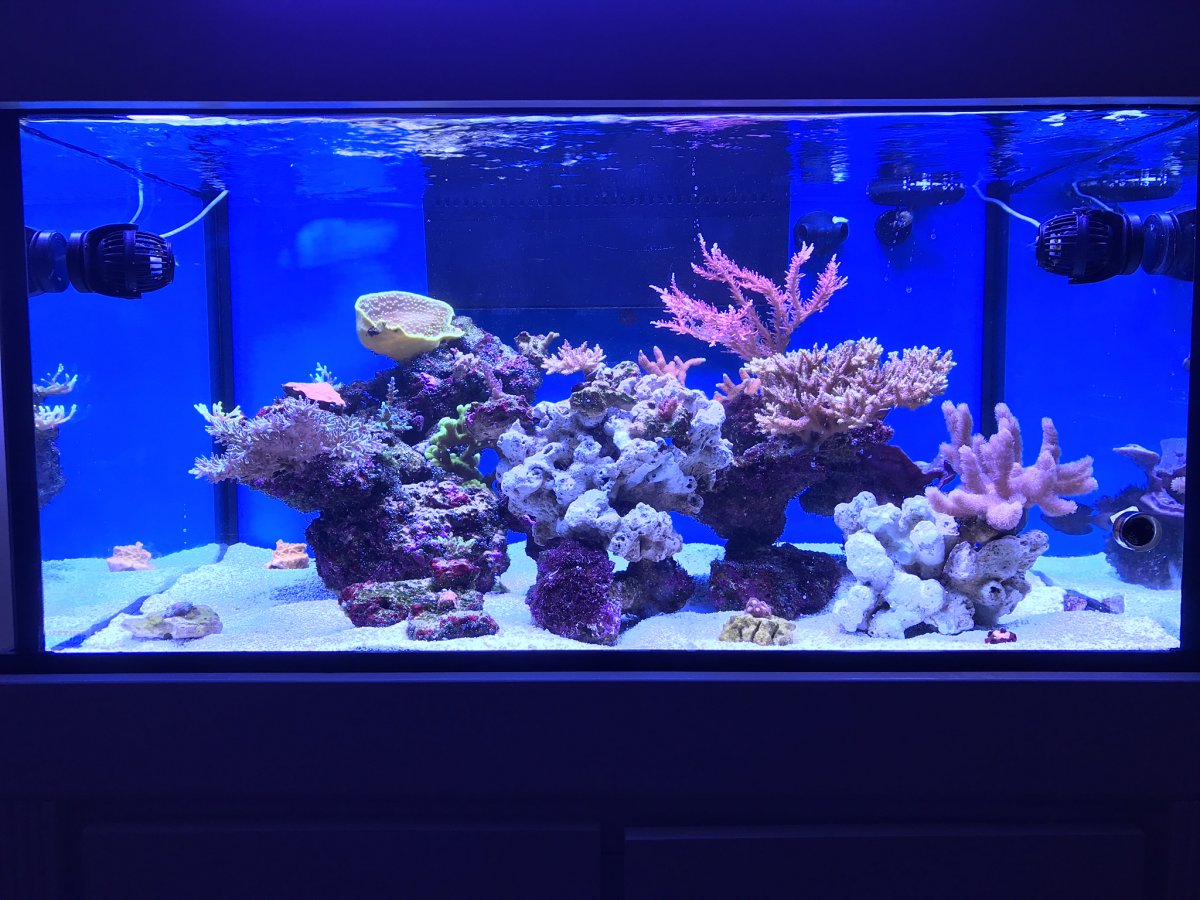 So this system went on for a few months doing ok. I added a Refugium as the new sump allowed space for it and it seemed like a natural and controllable form of nutrient export. I had experienced a heavy bubble algae bloom leading up to the upgrade and figured it was necessary.

I added a clump of Chaeto that started out doing ok and quickly soaked up all my nitrate and phosphate. Then the fudge started growing bryopsis instead so I tossed the dying chaeto and started pruning it instead. On and off pale corals and poor PE, fast forward to now. Got a wonderful dinoflagellate explosion, my first ever in the hobby.

I’ve since shut the the refugium, been dosing nitrate, sucking out Dino’s weekly and pumping water back into tank through a 20 micron RO sediment filter, and added a 25w Pentair UV, and a carbon reactor to help with the toxins causing snail death.

Not doing regular WC in an effort to raise nutrients has taken its toll on many acros (likely trace elements depleted) so I’m not doing great here but staying the course and maintaining patience.
OP

I’d like to occasionally talk about the many things I figured out during the success of the 40 breeder that aren’t obvious things especially for newer reefers and OGs that have had it easy. Somehow I never had a large RTN event but I think I could have. I have to thank BRS for pointing many of them out to me, and just generally being awesome folks that are hobbyists just like us but doing awesome things for the hobby.

Test regularly and set up a change schedule. I live in Minneapolis and have chloramines. I attribute the poor performance of my AIO to overlooking this. I was making less than 100g RODI water a month and had Chloramine blowing through my first carbon block in 3 months. I got a Hach CN-80 teste and established I needed to be changing the first every 2 months. I do the #2 block every 6 for good measure.

my tank follows your a little. I follow the KISS system ( keep it simple stupid ). A skimmer , regular water changes and constant testing and my tank is doing great. Your tank looks good. A wish you success.
OP

Couple top down shots of corals that continue to thrive even with the dinos unlike many others. 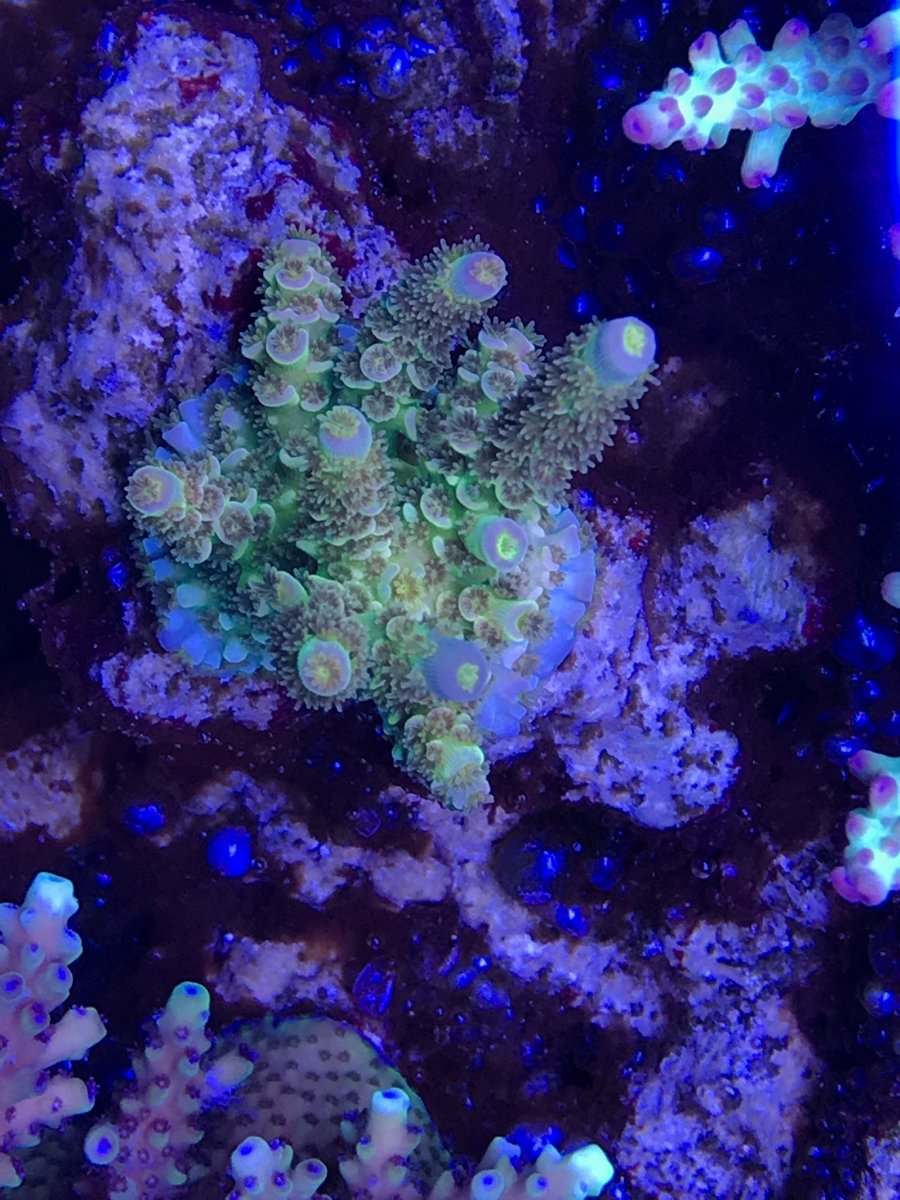 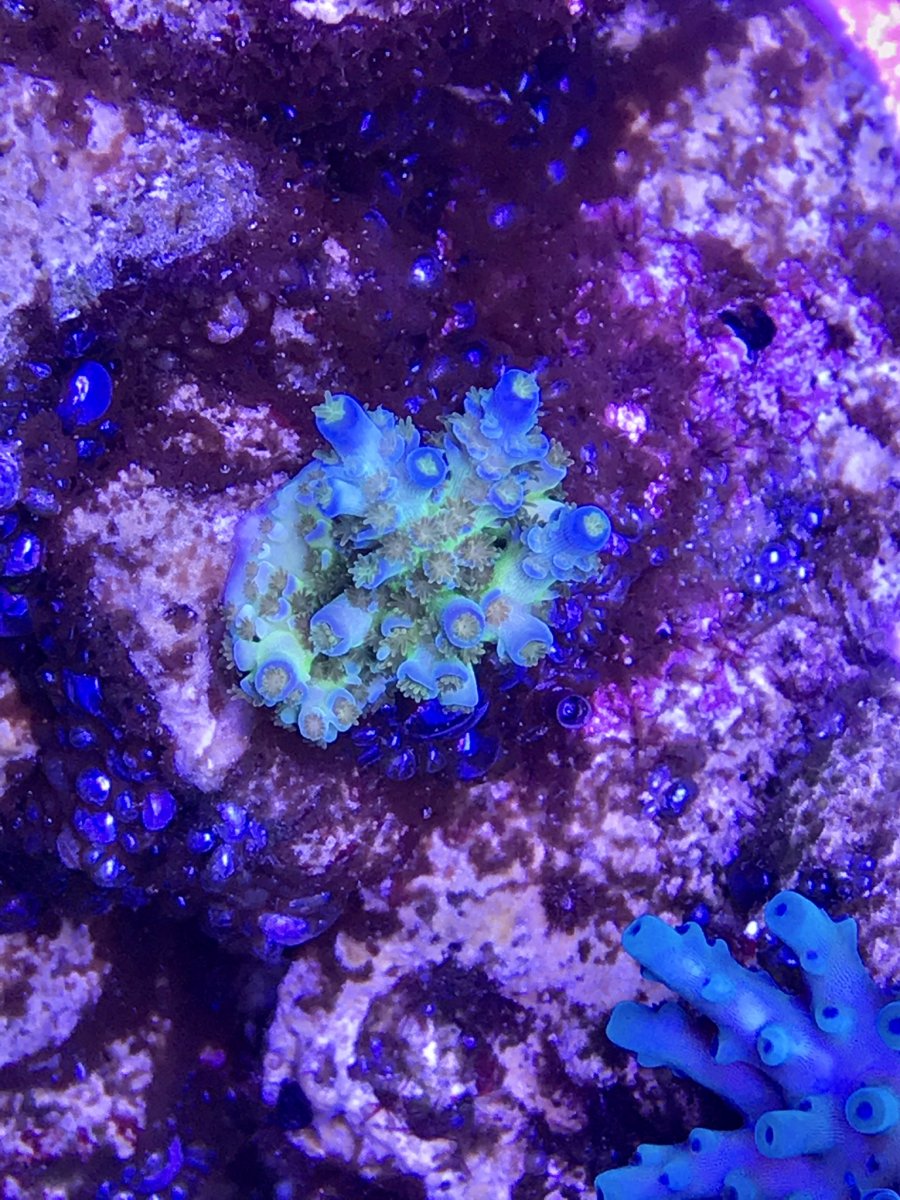 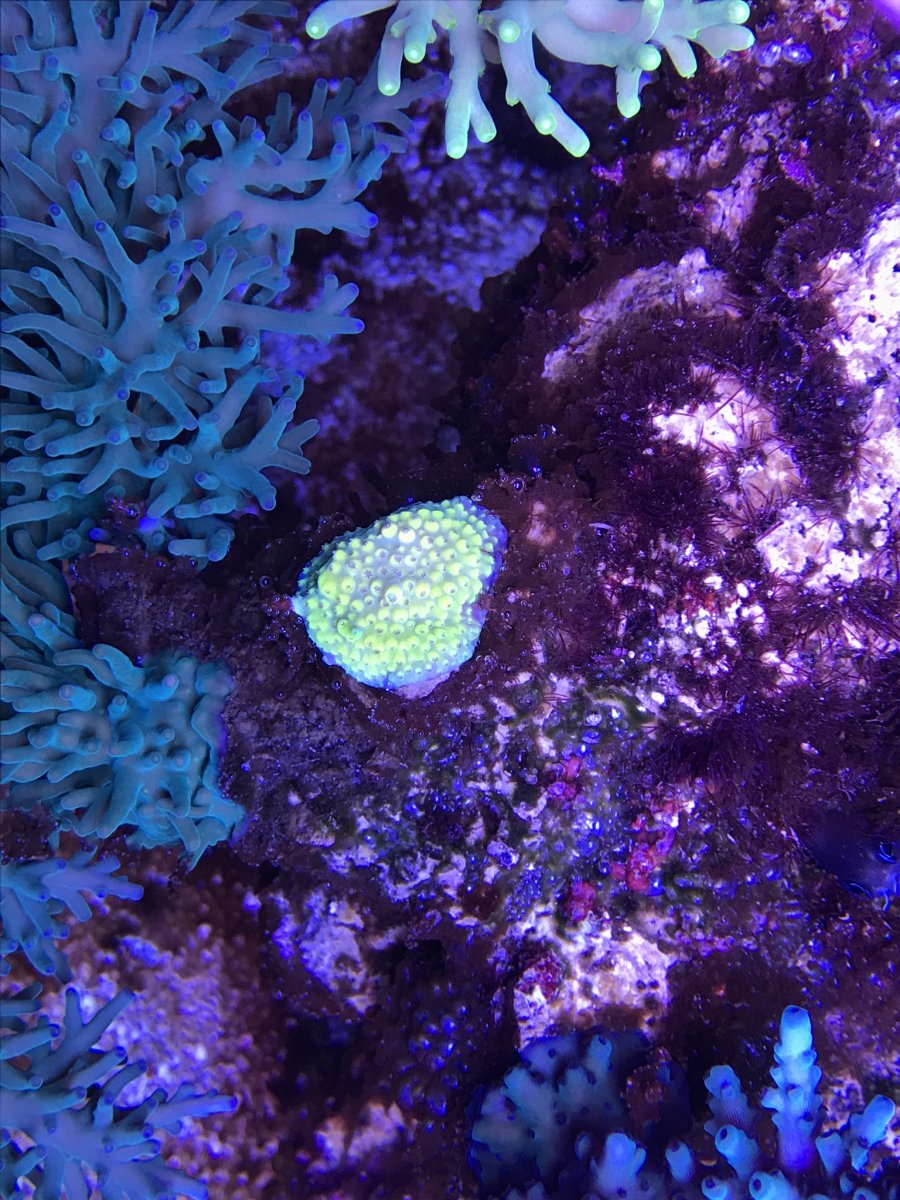 Fun update here. I suspect this issue was partly due to the changes made fighting dinos- UV and heavier feeding knocked out them out everywhere except the sand in less than a week. Ended up siphoning almost all the sand out and that was the trick.

Acros kept dying and things were looking bad so I sent in a Triton test.

91 micrograms/L Tin- the highest I’ve seen anywhere reported. I suspect this is due in part to all the new pvc (huge cannon included) added installing the UV sterilizer. I pulled this off and started doing big WC and looking for other sources. I did find my probe magnet was a tiny bit corroded and had a suspicion about my TLF mag feeder so I tossed both. I sent in an ATI ICP test for a second opinion and to check RO water- tin was 31ūg/l and RO was perfect. I’ve since done another 2x 30% WC and things are bouncing back.

I lost my huge Pink Lemonade and SSC colonies and a handful of others which sucks but as Julian Sprung told me once, “Do not be discouraged by the ethereal nature of Acropora”. WD, RRC pink caddy and several other high end ones pulled through fine.

Nitrate now hovers around 7.5 and Phosphate is slowly creeping up to .08 so I will toss 1-2tbsp Rowaphos in a media bag and go from there. Trials and tribulations of a reefer, man. 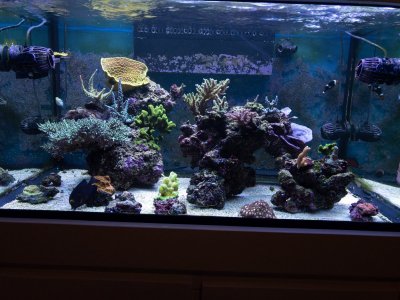 Following, nice job!..how high do you have your lights above your water level?
OP

Tierarzt said:
Following, nice job!..how high do you have your lights above your water level?
Click to expand...