Phosphate: How much is too much and do you even worry about it?

Imagine how many reef fish that Marlin ate

My Reefer 250 was looking horrible after doing well for the first few months. I was getting white slime every were, corals bleaching and no polyps. My green slimmer looked like a white stick. No3 zero and PO4 Zero. Pulled all the Refug algae, turned off skimmer for a month, overfed my 7 fish like crazy, still haven't done a water charge in 7 weeks, and dosed NeoPhos until 0.10. Nitrates still zero but the tank gas never looked better!

I target to keep Phosphate around .8-.10 but seem to be sitting around .15 - .16 right now. Got a bit of algae but it is not growing out of control so I do not mind it too much.

A few weeks ago I forgot to change out my GFO and it crept up to .25 and at that point I was having to clean the glass everyday. Used some Lanthum to bring it down but overdosed a bit and dropped it to .06 in a day which really upset some of my Acros.

I would echo what others have said, and shoot for a lowish but managable number. Bouncing up and down results in more harm than good.

My phosphates have been off the chart for sometime,1.0 +. My phosphates are finally starting to come down. I used to keep my phosphates pretty steady, between a .04 to a .06. In the past, if my phosphates climbed above .06 I would notice my corals would not be happy and I would bring the levels down back in line.

I do have a fuge and skimmer, but don't do anything else to try to lower them and most everything seems to be happy. I don't have a lot of SPS, but my montis are thriving.

I'd prefer to have my PO4 around .1, but I'm not tempted to fool around with it as long as everything is doing okay.

"...in perfect isolation, here behind my wall."

Mine stay between .03 and .08 at all times. I definitely keep a close eye on it because I have ran into a lot of SPS issues with low phosphates.

.10 is the way to go! if lower however, adjust your nitrates accordingly

I keep my PO4 below .1 and nitrates between 5-10. I don’t chance numbers so as long as I am with in those I am good with it. Haven’t had to use anything other than water changes to maintain those numbers.
Last edited: Jun 10, 2021

PO4 between .03 and.1 using GFO and Lanthanum CL
nitrates between 2 and 5 using Nopox and Biopellets.

ScottB said:
Eventually your rock and sand will bind up enough phosphate to keep enough available in the water column. It will gradually leach PO4 back when the water is "cleaner" relative to the rock.

Dosing phosphorus can accelerate that process, but you might be surprised how much of the additive will bind. I went through 2 liters of the stuff over a few months. Have not had to dose a drop since then. That was years ago.
Click to expand...

Thats good information my friend thank you! So until then im dosing 2ml every morning just to make sure there is enough free in the tank for my coral. I did get info that i need more then 12 fish to help with this situation but again my bio load is dependent on feeding

I run a large refuge with 80w of grow light over it.

It runs until the algae itself bottoms out the phos in the 0.03 range. It won't go lower because the algae growth stops.

If phos starts to creep up I dose Nitrate. The algae growth picks up and rebottoms the phos.

I have used Lanthanum chloride and Ferric oxide in the past but would only use them now if the phosphate is out of hand as low phosphate causes as many problems as high phosphate.

The algae filter has a natural fail safe the chemical methods do not.
K

Funny, I measure my PO4 more often in my FOWLR than my reef tank since there is way more waste and no cleanup crew.. have some predators in there (Porcupine Puffer, Clown Trigger, Harlequin Tusk) amongst some tangs. Snails and crabs would be meals.. so I try to keep phosphate in check just for algae control.

I try to keep it somewhere from 0.03 to 0.1 ppm for a mixed reef. Having some trace is needed for life. Zero doesn't necessarily mean it's zero if everything is sucking it up but it's impossible to measure so some measurable trace is needed. I shoot for a minimum of 0.03 to 0.04 with Hanna phosphorous ULR because the measurement accuracy gives a range of +- 0.02 ppm. That way at a minimum 0.03 tells me it's at least 0.01 up to 0.04. At these low numbers it's easy to increase or decrease just by changing feeding amounts slightly.

Phosphates matter as much as alk and calcium in my opinion. I had a large 12 inch colony of stylaphora die off. Then a birdsnest. Things weren't looking right. My Chalice that grew like a weed had flesh stripping off all over. I decided to do an ICP test thinking that I had dropped something in the sump. A screw or penny or something. Who knows. . . got the results. No hard metals at all, the only issue was no trace elements (they all were 0) I was using regular IO salt and my phosphates were .56. I got a hanna tester and a week later, they were up to .66. My chalice continued dieing other corals were looking bad. No growth, signs of recession or outright death.

I dosed phosphate-e daily to get them down, set my algae turf scrubber lights to be on 22 hours a day instead of the 14 hours a day they were on and started doing water changes with Reef Crystals every 2 weeks at 30-40%. (130 gallons each time).

It took me 2 months to reduce phosphates from .66 to .07 ppm. Since then my Acros have tripled in Size, my Stunner chalice healed up and is back to growing like a weed. My Hammers have since added additional heads. My RBTA that was looking horrible and shriveled up is now open everyday and happy everyday. My superman monti is spreading for the first time!

Frags are growing. I have an alveopora that is looking amazing and growing relatively rapidly.

I can honestly say I haven't been happier with my tank since getting phosphates under control. I'm no longer dosing phosphate-e. Instead I'm vodka dosing 3 ml of vodka per day and that is keeping phosphates less than .1 ppm. I still test every 2-3 days to see what's happening but they're managed.

My Turf scrubber is full of a large 8-10" ball of hair algae within 3-4 days now. It used to be 7-8 days until I cranked the lights to be on longer each day.

.05 or higher IMO. Riding ultra low levels is a big no no IMO
B

1. Do you worry about the phosphate levels in your reef tank?
I worry every day after I had dinos, presumably, from 0 phosphate.

I only have 2 small clownfish in a 20 gallon and the amount I feed them virtually does nothing to my phosphate levels so I have to dose phosphate. Since doing so, I haven't had dinos and only little algae with my CUC.

1. Do you worry about the phosphate levels in your reef tank?
nope

2. What is your target level of phosphates in your tank? 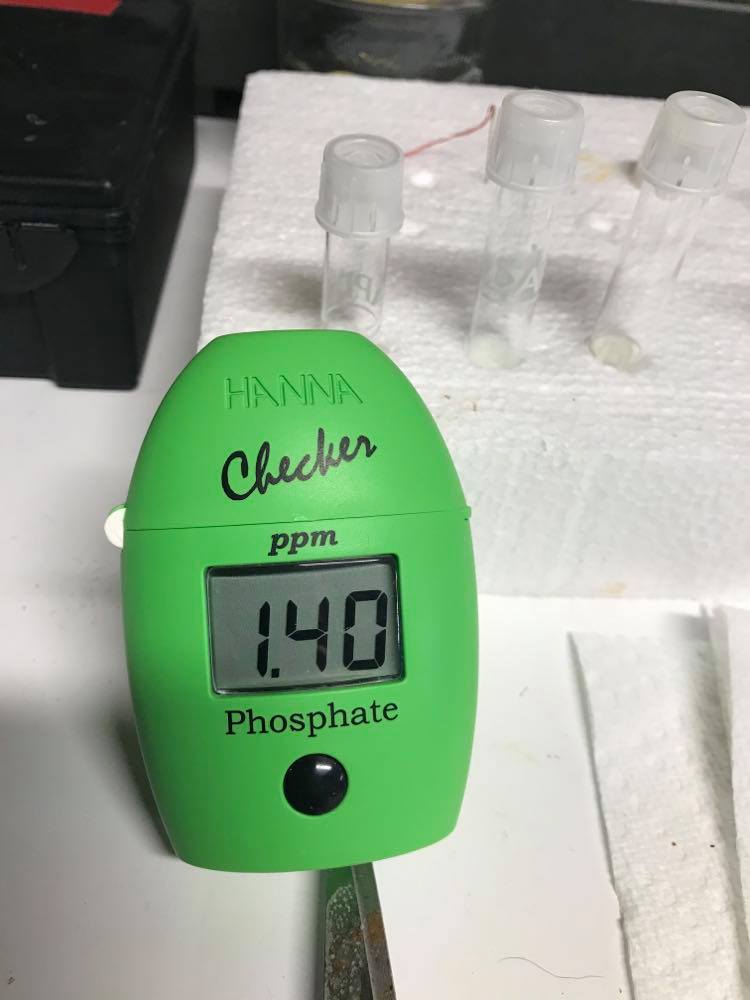 nope... or there abouts.

I average about .08 but my target is between .04 to .12. I use Hanna Inst phosphate tester to check it weekly. I have a nice size refugium packed full of different types of algae to keep things right.

How much pellets/flake do you feed?

QUESTION OF THE DAY How many inches of sand do you have in your reef tank? Does it matter?
2 3 4

Still have algae with low nutrients and how reliable are Hannah phosphate checkers?

QUESTION OF THE DAY What is your dirty glass telling you & how quick does it get dirty?
2 3 4 5

QUESTION OF THE DAY Enjoying, Feeding, Cleaning, Researching, Chatting: How much time do you spend reefing?
2 3