jarviz said:
wait are nano clowns a real thing? i still haven't seen or heard of these yet
Click to expand...

I'm not sure if that's a real thing either, but the name on the glass did say "Nano Clowns".

Looks like a great start, I like the peninsula style too, I have a pico similar size.
OP
K

5.5g glass from petco, diy aio insert i made of travertine. This is from a few months back, the acros have all removed because of the ycg eating them. 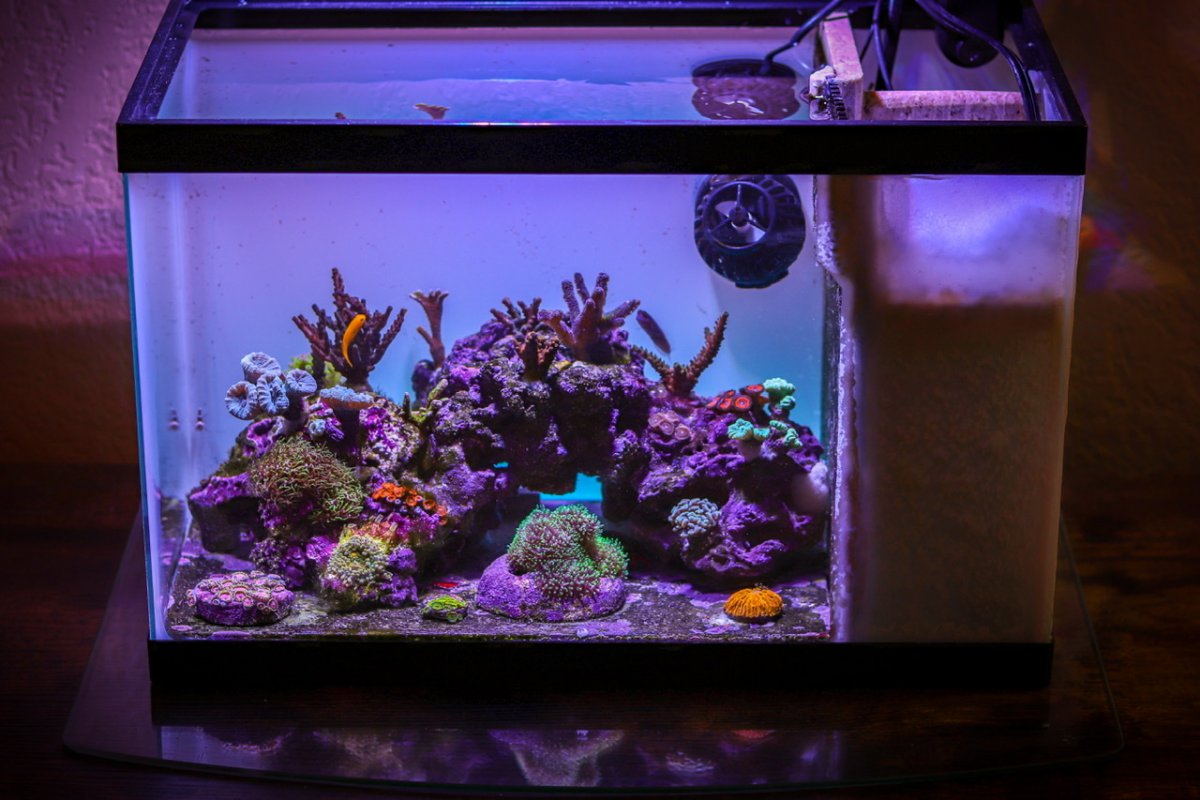 How's this tank coming along?

danieyella said:
How's this tank coming along?
Click to expand...

Just got a juvenile Ocellaris, a hermit crab, and a snail for it today.

Yesterday ammonia was at 0 (has been for a while) and nitrates were at 10 PPM. Did a 40% water change before putting the critters in.

what kind of powerhead is that? is it not over kill for that tank size?
OP
K

Bought my kid his first inhabitants for his pico - a juvenile Ocellaris, a hermit crab, and a snail.

Thanks for sharing this build. I just picked up the same tank at my LFS and excited to get started with it as my office desk tank.
OP
K

pitcariboo said:
Thanks for sharing this build. I just picked up the same tank at my LFS and excited to get started with it as my office desk tank.
Click to expand...

Right on, my man. Don't forget to share pics, or a build thread of your own. Love these little picos.


It's been about a month (started cycle 05/24) and the tank has been doing great. Parameters are stable. Ammonia has been at 0 and nitrate is between 0 and 5 ppm (hard to tell from the API test kit).

Current tank inhabitants are 1 ocellaris clown, 1 red legged hermit, 2 trochus snails, 1 turbo snail, and 1 nassarius snail. I feed minimally twice a day, and a 35%~ish water change every weekend. Lights are on a 12 hour cycle, ramping up and ramping down.

I did lose the original turbo snail and clown on the 3rd week of the tank being up. One day the snail made it's way down to the sand and just stayed there for days. Didn't move at all and I was afraid it was dead. Took it out to avoid an ammonia spike. I tried prodding it but it didn't respond. The tank temp had spiked to 83 degrees so maybe that stressed it out.

The original clown died due to a dumb mistake I made. I was procrastinating on ordering a lid, so I had a makeshift lid in the meantime. It was basically two sheets of a paper towel draped over the tank, pulled taught, and held down by tape. It was a temp solution meant to keep the dust out of the water and the clown from jumping. It actually worked well for weeks. However, we had a heat spell and had a couple of humid nights. I guess the humidity was enough to weigh the towels down just enough to touch the water. Once it made contact with water, game over. The towels absorbed a lot of water out of the tank. My kid woke up to a loud return pump and I had to do a cleanup at 6 in the morning. The clown was a bit responsive once I got fresh saltwater in the tank, but he was gasping and leaning on his side on the sandbed for most of the day. He didn't make it to the night.

After that, no more towel cover and the lid is on order. The tank has been doing well again. I got another juvie occellaris a few days after and he's been doing well. That is, up until a couple of days ago. He developed some sort of white fungal growth on his lip and side of his face. I posted a thread to see if the community can identify it. He's eating and swimming normally and is very active. To be on the safe side, I placed him in a hospital tank and treating him with malachite green.

I also placed the Ink Bird and spectral controller on the side of the cabinet for easy access. Not great, but it's as neat as it's gonna be.

Anyway, I'll treat the clown for a week and place him back in the pico if the lesions are gone. Here's a few pics of the pico before I moved him.