A few months ago, I noticed a yellow mass growing on rock behind a coral. After a recent water change the mass suddenly expanded, forming, an approximately 3-4 X 1 inch column (picture attached). This is not the first time a yellow growth has appeared in this tank. When first established -over 15 yrs. ago, it was not uncommon for small yellow growths to appear for short periods of time. This is the first time one has increased in size and so suddenly.

Could anyone confirm this is a sponge? Any thoughts on this sudden growth? I've been treating the tank for an overgrowth of green and red algae and physically removed a significant amount during the water change. Do sponges, if this is one, feed on algae? 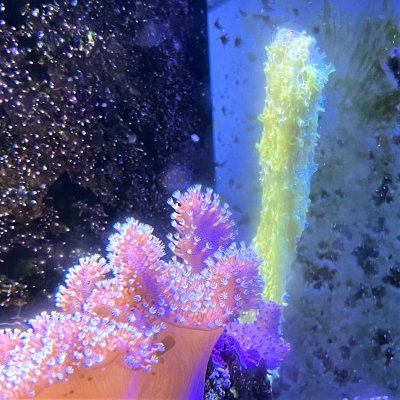 Probably a Clathrina sponge, a calcareous sponge that is generally a harmless filter-feeder. They cannot feed on algae (even phytoplankton particles are too large) and instead primarily feed on bacteria (I hear they prefer particle sizes under 0.5 micrometers). Perhaps the algae was competing with/smothering the sponges. 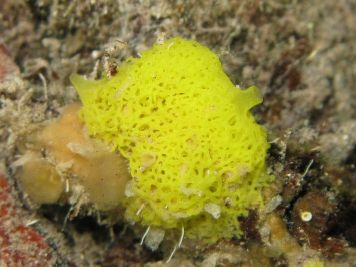 Agreed that it looks like a sponge. From what I’ve seen with the few sponge diets I’ve looked into at present, I’m also inclined to agree that they don’t eat much phytoplankton- they seem to typically eat bacteria and organic nutrients (such as Dissolved Organic Carbon - DOC).

Another possibility for the sudden growth is you may have somehow (likely in the removal process with the algae) released/kicked up a large amount of bacteria or nutrients into the water column for the sponge to feed on.

Sponges and glass… Not the type you’d think.

A
Coral not opening up like before and sponge problems

Rinsing the return pump sponge in a RedSea Max Nano