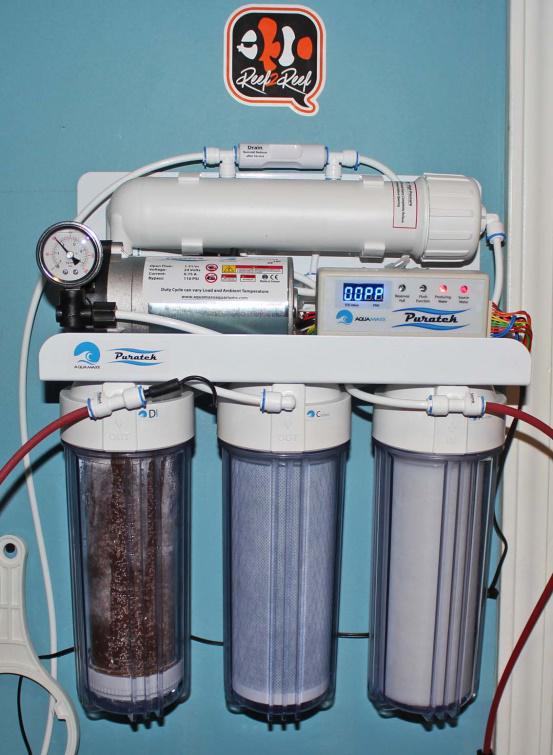 Water evaporates, salts do not – this is one of the first things a marine hobbyist learns. Hence fresh water must be added to keep the aquarium water from becoming too salty. If you’re fortunate, tap water in your area might be suitable for topping off the water level. In many cases, this is not the case and some sort of pretreatment is required. If you’re unsure of your local water quality, an internet search for ‘map USA groundwater hardness’ will give you an idea.

One of the most common methods of pretreating top off water is a reverse osmosis (RO) filter, often followed by de-ionization. We’ll take a look at one of the better RO units – the AquaMaxReverse Puratek Deluxe Osmosis/Deionization unit. This system has a prefilter (rated at 5 microns) to remove silt, clay, rust, etc., a carbon filter for some organic and total and residual chlorine, a thin film composite filter reverse osmosis filter, and finally a deionization cartridge containing anionic and cationic resins. Also included is a small pump boosts feed water pressure to increase permeate production, a conductivity meter to monitor permeate quality (reported as parts per million total dissolved solids (TDS) and a wrench for removal of housings when filter replacement is necessary. A 9-page instruction manual is also provided. The only things not included are two lag bolts for mounting to wall, if desired.

If you’re new to the hobby, some of these terms might not be familiar, so before continuing, let’s define some of the terminology.

Glossary
Reverse Osmosis (RO)– A water treatment filter where pressurized water is forced through a filter than has tiny pores to remove contaminants. Nanofiltration (NF)– Similar to reverse osmosis, but the filter membrane has larger filter pores and thus can operate at a lower water pressure. Removal of many substances can be as high as 98%.
Feed – Water to be treated by a RO or NF filter.
Permeate – Clean water produced by RO or NF filtration.
Concentrate – Water containing the substances that are removed by a RO or NF. Also called ‘reject’ this water goes down the drain. Micron – One thousandths of a millimeter.
Ion – An atom or molecule demonstrating a positive (cation) or negative (anion) charge.
Electrical Conductivity (EC) – The ability of substances dissolved in water to conduct an electrical charge. Also called Conductivity for short. Reported in units of microSiemens per square centimeter or milliSiemens per square centimeter. The lower the EC, the less dissolved salts the water contains. As a footnote, silica does not conduct an electrical charge. Total Dissolved Solids – The amount of organic and inorganic substances dissolved in water. Abbreviated as TDS, it can be monitored by a electrical conductivity meter. Deionization – Removal of charged ions through use of cationic and/or anionic resins.
GPD – Gallons per day.
PSI – Pounds per square inch, a measure of pressure.

What is Reverse Osmosis?
Reverse osmosis is a treatment process based on pressure driving water through a semi-permeable polymer membrane. This membrane resembles a roll of paper towels and has multiple pores through which the water molecules pass while many contaminants cannot. The size of the pores determines what contaminants will be removed. Technically, units sold for household use are almost always ‘nanofiltration’ devices. Nanofiltration membranes have larger pore size and thus require less feed water pressure. Since an average household water pressure is about 50 psi, a true reverse osmosis membrane (with a smaller pore size) would perform poorly in that situation. True RO filters require pressures of 250 to 1,200 psi, while nanofiltration membranes are effective at lower pressure (75 to 150 psi). Nanofiltration devices can remove large particles (sand, silt, clays although these are usually removed by a prefilter rated at 5 microns), bacteria, high molecular weight proteins, organics including humic acids, pyrogens, viruses and divalent ions, larger monovalent ions, color and odor. Since the term ‘reverse osmosis’ is entrenched in the vernacular among hobbyists, it will be the term used in this article.

Cycles of Concentration
This is a term normally used in the cooling tower water treatment field but it applies to aquarium as well. If no means are taken to remove phosphorus through biological, chemical, or dilution (water changes), the addition of tap water containing phosphorus will increase that concentration. This could be especially important if your water utility adds sodium hexametaphosphate to control corrosion in water mains and household potable water plumbing. Of course, cycle of concentrations apply to any chemical we might consider to be a contaminant.

Rejection Rate
This is the ratio of ‘clean’ water produced (permeate) and the ‘dirty’ water that goes down the drain (the ‘concentrate’ or ‘reject’.) This depends upon many factors, including feed water pressure and chemical composition, temperature, filter pore size, and so on. I checked and found permeate production was 36% of feed water. In other words, 1 gallon of pure water is produced for every 1.77 gallons of concentrate. Again, your ratio could be different. 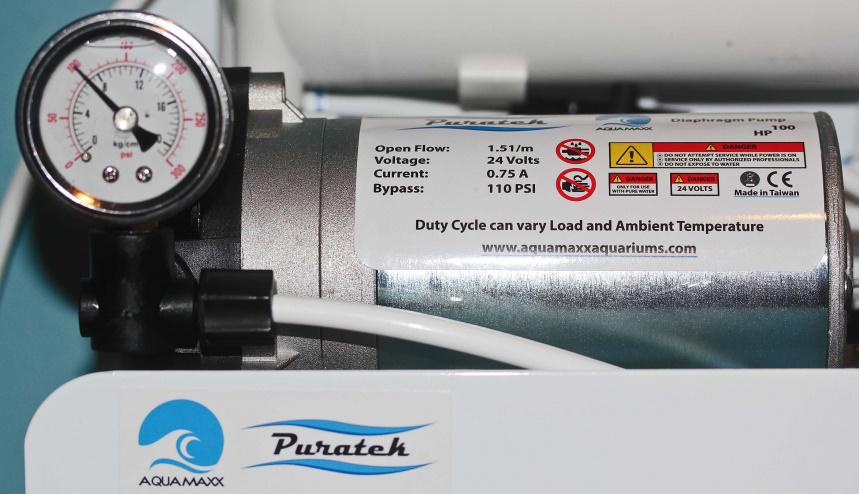 Figure One. The booster pump.

Performance
This RO unit is rated at 100 GPD, but I found it to be ~128 GPD. Bear in mind that feed water quality and pressure, temperature, etc. all play important parts in permeate production – your results could be different. These were my feed water parameters: Temperature = 78°F (25.6°C); Conductivity = 165 µS∙cm; Water pressure = 100 psi.

Increased temperature (up to 100°F) and pressure will increase permeate flow (but be aware of pressure ratings of filter vessels.)

TDS Meter
A digital meter reports total dissolved solids (TDS) in parts per million. It is possible to convert TDS to Electrical Conductivity (EC), but at such low permeate TDS, this is not necessary. See Figure Two.


Discussion
I found the AquaMaxx nanofiltration unit to exceed the advertised production of ‘pure’ water. Power consumption by the booster pump is low (35 watts) while almost doubling feed water pressure. The booster pump reduces the amount of concentrate that goes down the drain. The unit’s microprocessor automatically flushes the membrane thus extending the filter’s useful life. These factors reduce operating and maintenance costs. In short, this filtration system is effective and efficient.

There are some things the owner should know. This filter can remove things we would prefer to not enter the aquarium, but it also removes some good things (such as calcium and magnesium) – it is not selective. If your water is hard (contains a lot of calcium and magnesium), water straight from the tap could raise these elements, perhaps leading to imbalances in the aquarium water’s chemistry. It is best to add ‘pure’ water as a top off and supplement elements as necessary. The same is true for mixing artificial seawater.

Effect on pH
An effective nanofilter will reduce compounds that buffer against drops in pH, this is compounded by the fact that carbon dioxide gas will pass through the membrane, thus lowering pH. I do not have a pH probe designed for use with low-conductivity water, but I did add the bromcresol green/methyl red reagent and observed an immediate pinkish color, indicating a pH somewhere near 4.5 standard units. See Figure Three. 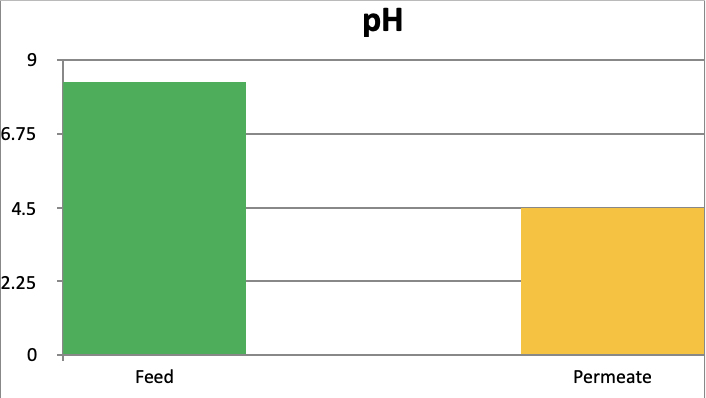 Figure Three. Most buffering agent are removed by the membrane while carbon dioxide passes, resulting in depressed pH.

Effect on Alkalinity
Alkalinity can also be reduced. This was determined by titrating samples of feed and permeate samples with a sulfuric acid (of known strength) to an endpoint pH of ~4.5 (using bromcresol green/methyl red as the endpoint indicator.) See Figure Four. 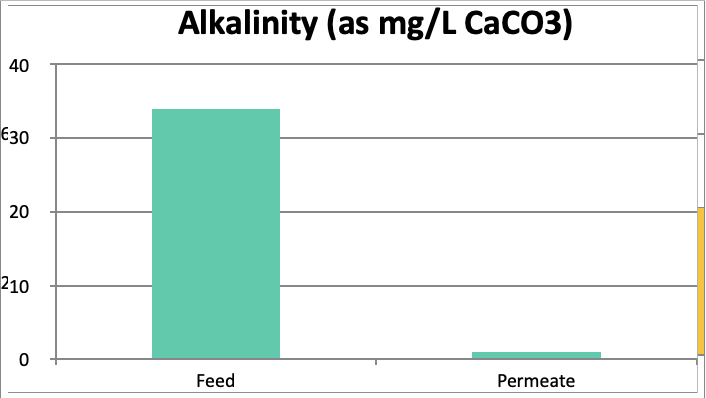 Figure Four. The feed water has a low alkalinity, and the permeate contains less.

Effect on Dissolved Oxygen
Dissolved oxygen (DO) can be reduced by some reverse osmosis units. Using a Hach luminescent DO probe connected to a HQ40d multi-meter, I found impact on DO to be minimal. See Figure Five. 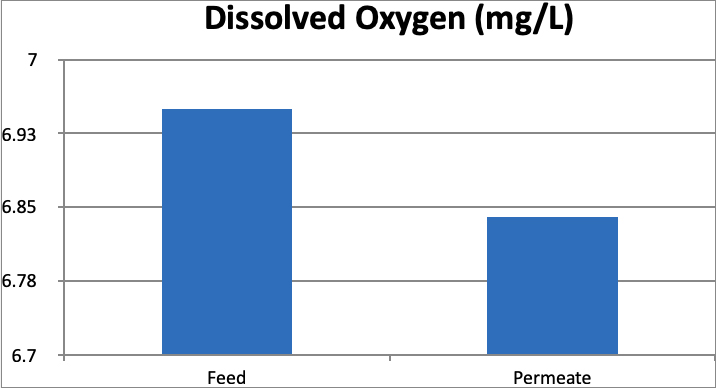 Effect on Electrical Conductivity
As mentioned earlier, substances dissolved in water can conduct an electrical current (pure water does not) and in many cases conductivity can be used to indicate purity. EC was measured by a Corning conductivity meter (model 311). See Figure Six. 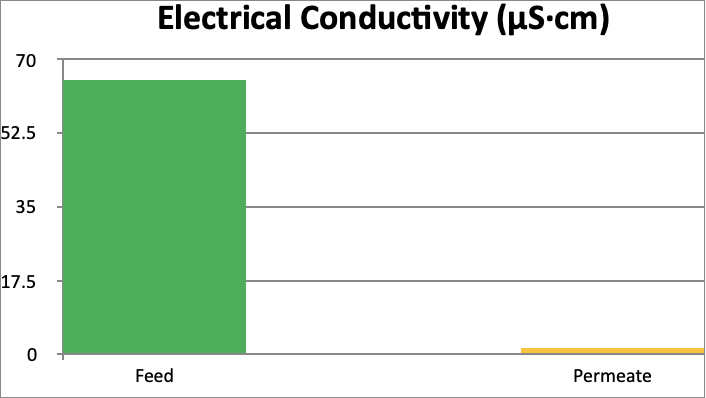 Figure Six. Almost all substances that can conduct an electrical current have been removed.

Effect on Phosphorus and Nitrate
I am fortunate that my tap water contains little phosphorus (ortho-phosphate as P) and nitrate (as NO3-N). The P content at the tap was below the detection limit of the analytical device (a Hach DR 890 colorimeter), hence it would be an exercise in futility to test further. Nitrate in the tap water showed a reduction (71%) but the permeate result was below the detection limit as well, therefore I do not consider the result as reliable, but will say there was nitrate removal.

I’ve owned many RO units over the years and the AquaMaxx unit is by far the nicest, and I look forward to many years of service.

Disclaimer: This RO (nanofiltration) unit was donated to my laboratory by Marine Depot (www.marinedepot.com and Reef2Reef (www.reef2reef.com) in return for an objective review. All claims made in this review are true to the best of my knowledge. Various parameters (temperature, feed water quality, and others) could affect the performance of this unit and your results could be different.
Click to expand...

Can a link to this RO unit be added? Or am I just missing it?

...
I’ve owned many RO units over the years and the AquaMaxx unit is by far the nicest, and I look forward to many years of service.
Click to expand...

That's a pretty strong statement by Dana Riddle and certainly tells me that this is a product that is worth taking a strong look at!

Love that it actually exceeded the advertised flow rate for Dana.
M

I like the microprocessor controller and the information supplied by the TDS meter. The booster pump is a real need for me. I particularly like the low waste water as my water and sewage charges are quite high, this would allow me to increase my shower time from 2 minutes to 3, a win win for everyone.

Love the pump and flush system- great set up! I really need this unit...
Z

This looks great. The booster pump really helps if you are on a well water like me with lower pressure.

The microprocessor unit adds extra functionality that I've not seen in a RODI before. I also like the booster pump because we have low water pressure here.

I have an older version of this same system. It was Vertex back in 2017, not Aquamaxx but it’s the exact same unit and it’s been working like a champ for me.

Wow this is a Great setup! I was out the hobby for almost 5 years and sold all my equipment so I would love to have this!

Dana is always a great resource and puts a lot of his time and unbiased opinion into his work as far as I am concerned.

I just replaced all my cartridges and membrane to try and get the best performance possible. Luckily I don’t need the booster. I get 60 psi and my incoming tds is only 52. I also have an in-line refrigerator type coconut shell water filter before the Rodi just to help. Along with using a brs flush valve before and after I hope that is enough. That aquamaxx sounds slick for heavier applications.

Flush feature seems great! Love that this is lower waste.

I agree that looks like a real good RO/DI machine, having a built-in pressure pump is real nice.

The low rejection rate vs completed water is excellent.

peaked my interest
B