Project Phoenix or The Resurrection of a 3.1g Aquarium

From the ashes of my mistake it is reborn...

Since I already had most of the gear… I decided to buy more stuff [of course] and resurrect my nano. Fluval says it’s 2.6g; the measurements say 3.5g, the display is 2.7 and with sand/rock mine comes to 3.1g…. So, yea. Nothing about this tank is 2.6g.

I like my 5g, but it was put together overnight and lacks any creativity or aesthetics. The TL;DR is I mistook one bottle for another while regenerating Purigen and it destroyed the Spec III.

The rock (2.5lb) and sand (2.5lb) are dry aragonite. The rock was super glued and epoxied together. The rock work is Japanese minimalism (Zen) inspired. There are at least a dozen places plugs will fit at different angles. It’s inclined toward the front @ 30° and segregated so corals cannot immediately touch each other.

I’m going to use and review Red Sea’s Reef Mature Starter Kit as well as their whole "method". Like so many other European companies, it’s based on a 100L dosing model. Rounding up, this tank will be dosed at 12L. I won’t be using NOPOX since I don’t have a skimmer attached. So, no lights for the first week either. I took a filter pad from the 5g (a week old) to help seed bacteria.

I won’t detail parameters since I’ll be following the Red Sea “Mixed” Reef method (with kit). The light is a Fluval Nano Bluetooth 3.0 20w LED, but I’m going to switch it out to either a Kessil A150W or HIPARGERO 30w depending on which I figure out how to mount. Neither come with a mount compatible with this tank so I’ll have to rig something. The return pump was replaced by a 80gph. Amazingly, I’ve actually gotten birds nest and some branching montipora to grow in those conditions – albeit slowly – but this time I’ll be trying to keep softies only (…best laid plans...). ATO will be gravity fed, but I do have a couple automated ones, but they may be overkill.

Note: Everything is rounded to the next highest whole or half number. I purposely mixed the Red Sea Salt to 8.1dKH just so I could use the KH-Coralline.

Day 1: System Setup
Setup up tank, water and lights.
Calls for 2-3” of sand bed but decided that was too much. It’s close to 2” in the back and 1" in front. SeaChem Matrix will make up for the limited sand. That stuff is just wonderful. Just don’t forget to refresh 1/3 of it every few months as it can become clogged if not shaken out and cleaned. Calls for lights, but not going to run them for first week. Curious to see there will be new tank syndrome.

Note: Want to run the tank a little warmer, but all my heaters are automatic.

Red Sea pegged their numbers very accurately. I'm willing to be that if I had not seeded this tank with an old filter pad the numbers would have been within the error range of the test kits. Kudo's to Red Sea's biology department. So far I like the idea of the Red Sea methedology because it gets you interacting with the tank on a daily basis, would probably help a new hobbyist understand the science behind it as well as understanding what "stability" actually means, and it's actually kinda fun (note my little testing station lol). 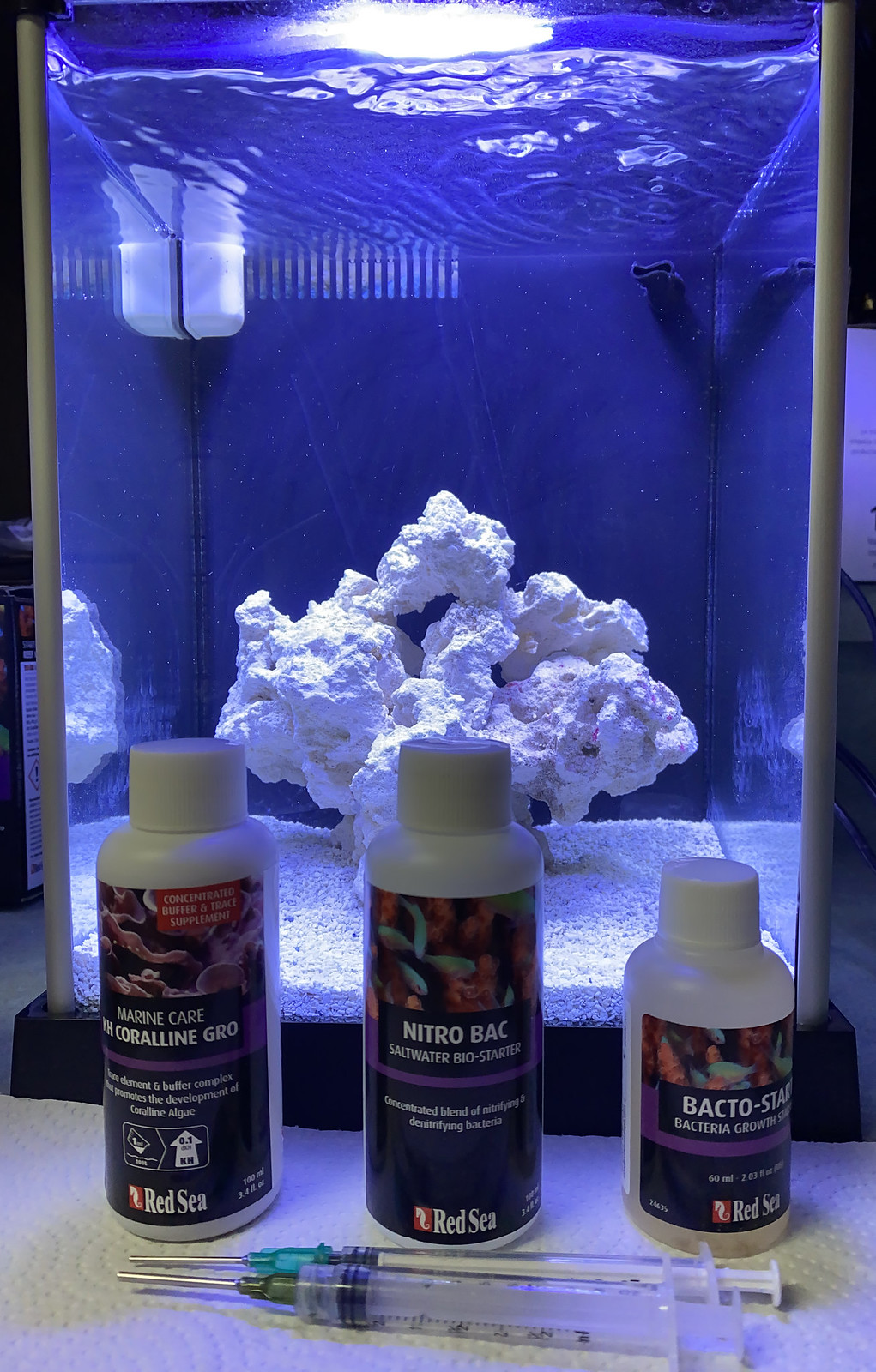 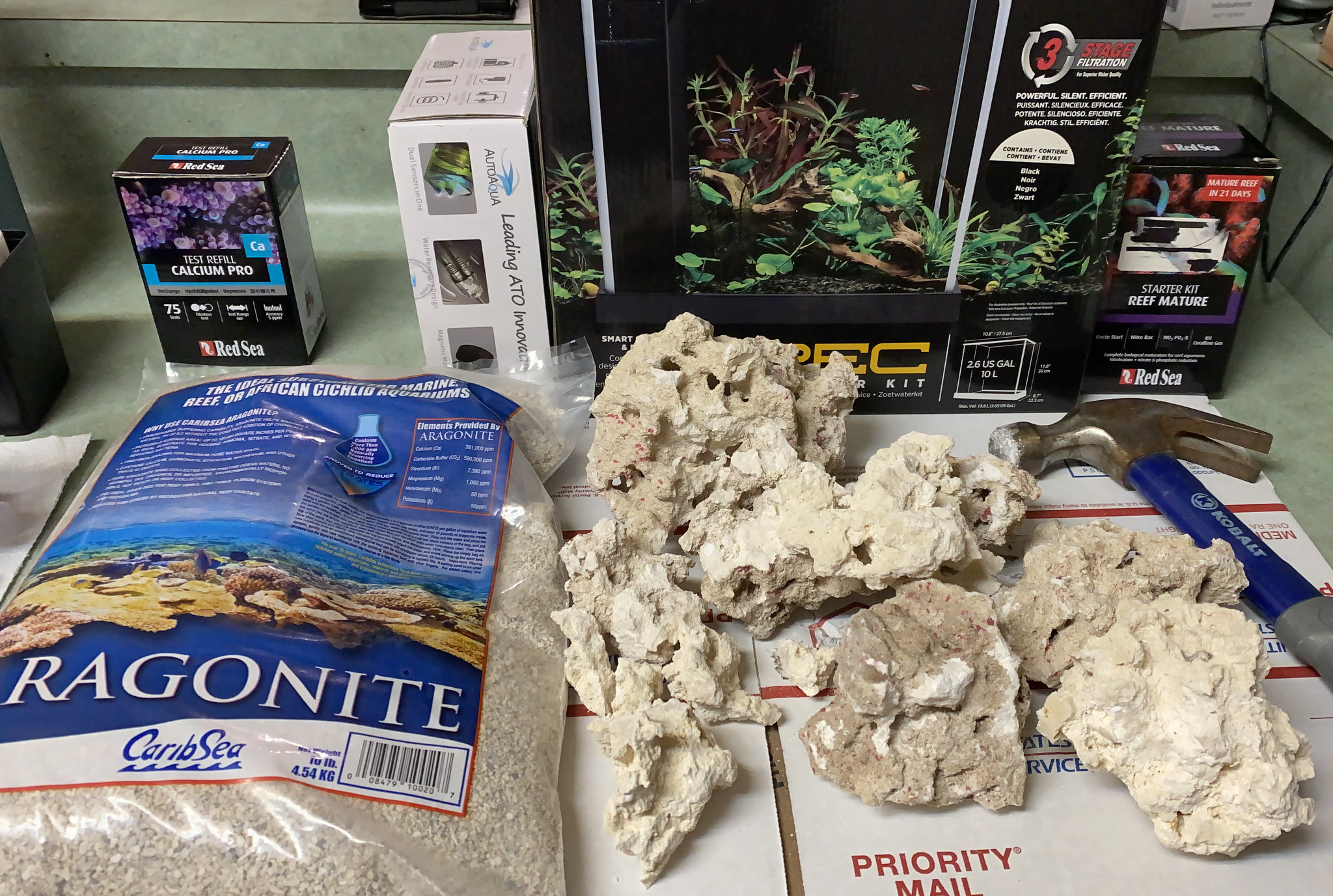 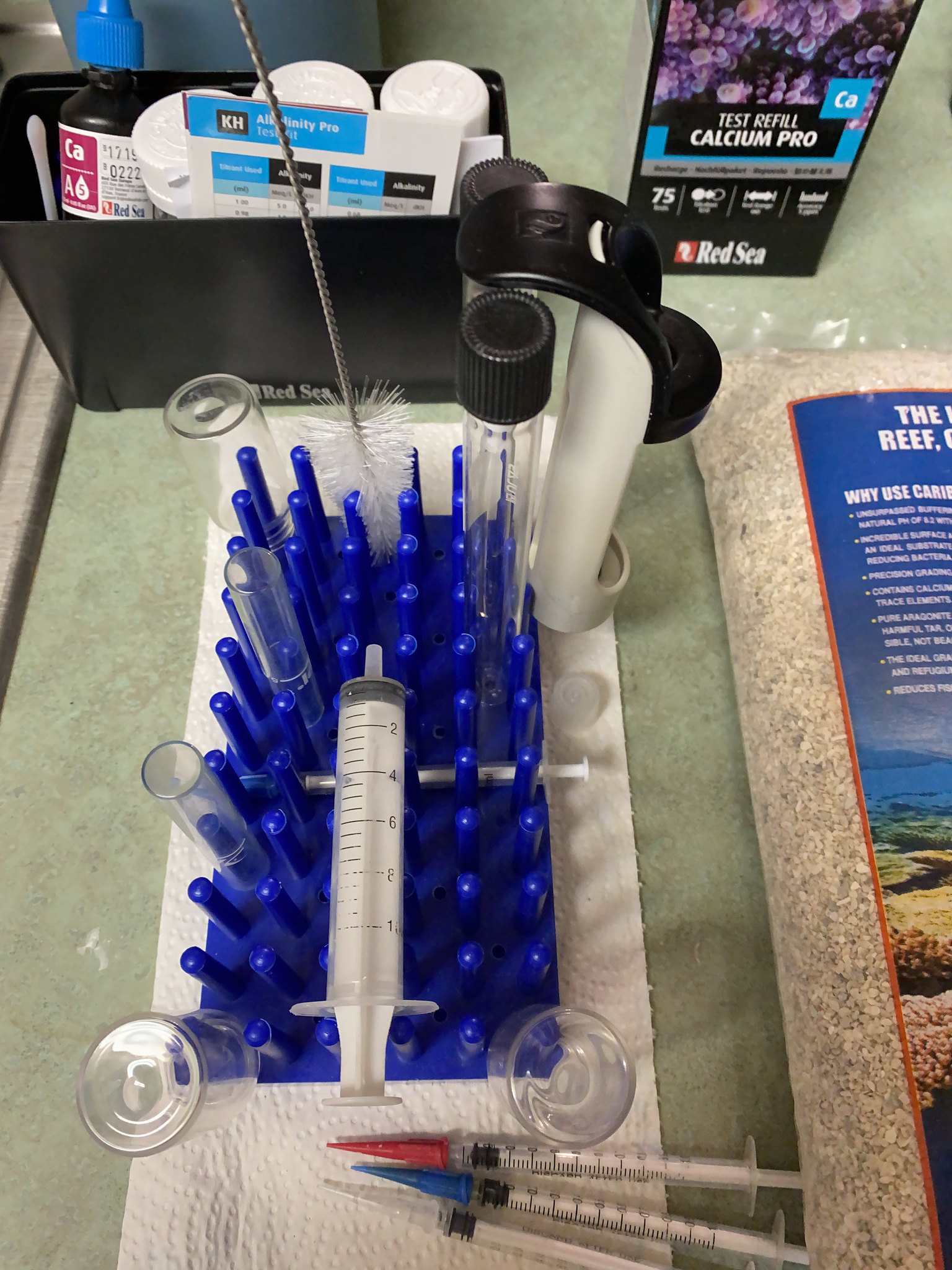 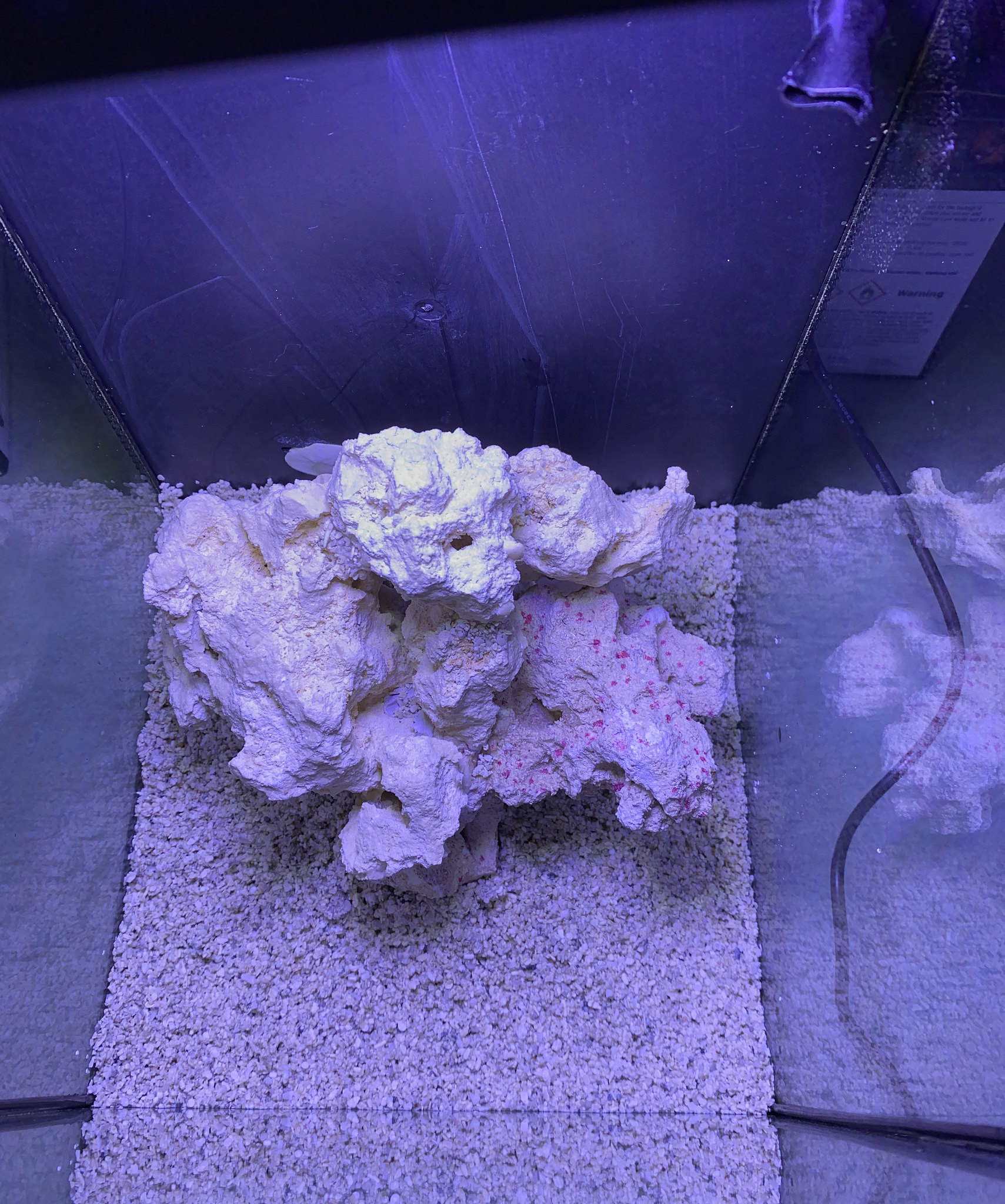 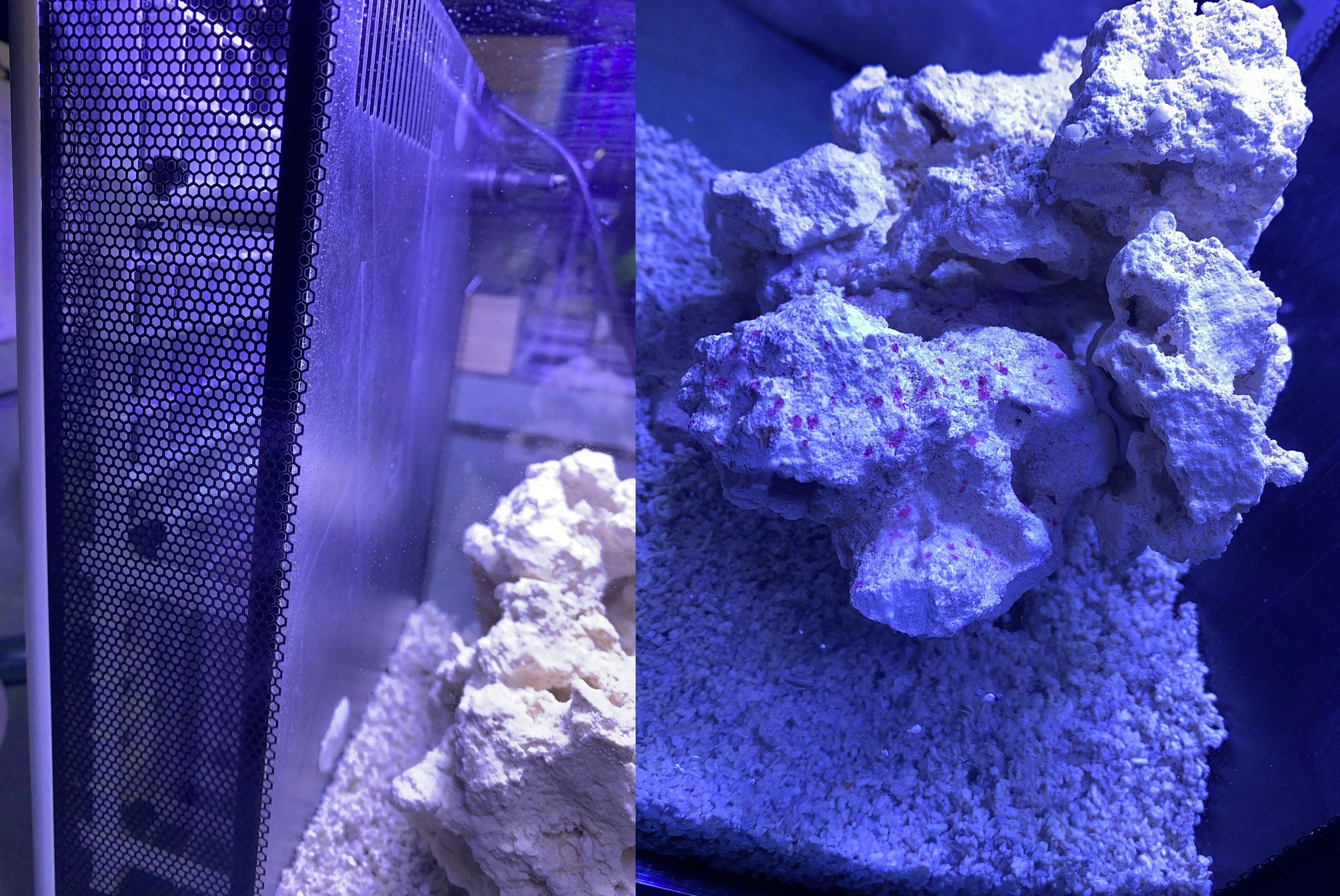 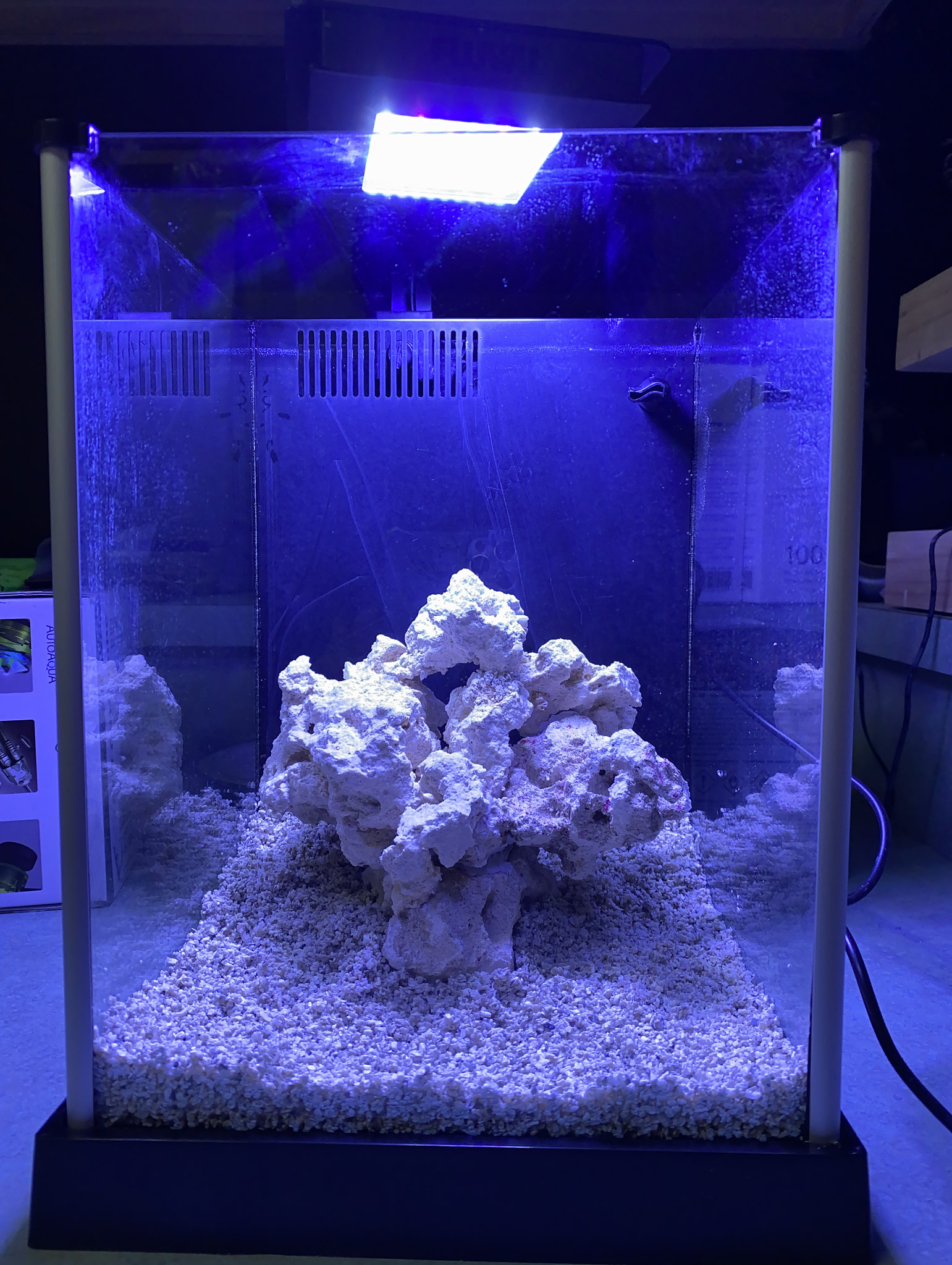 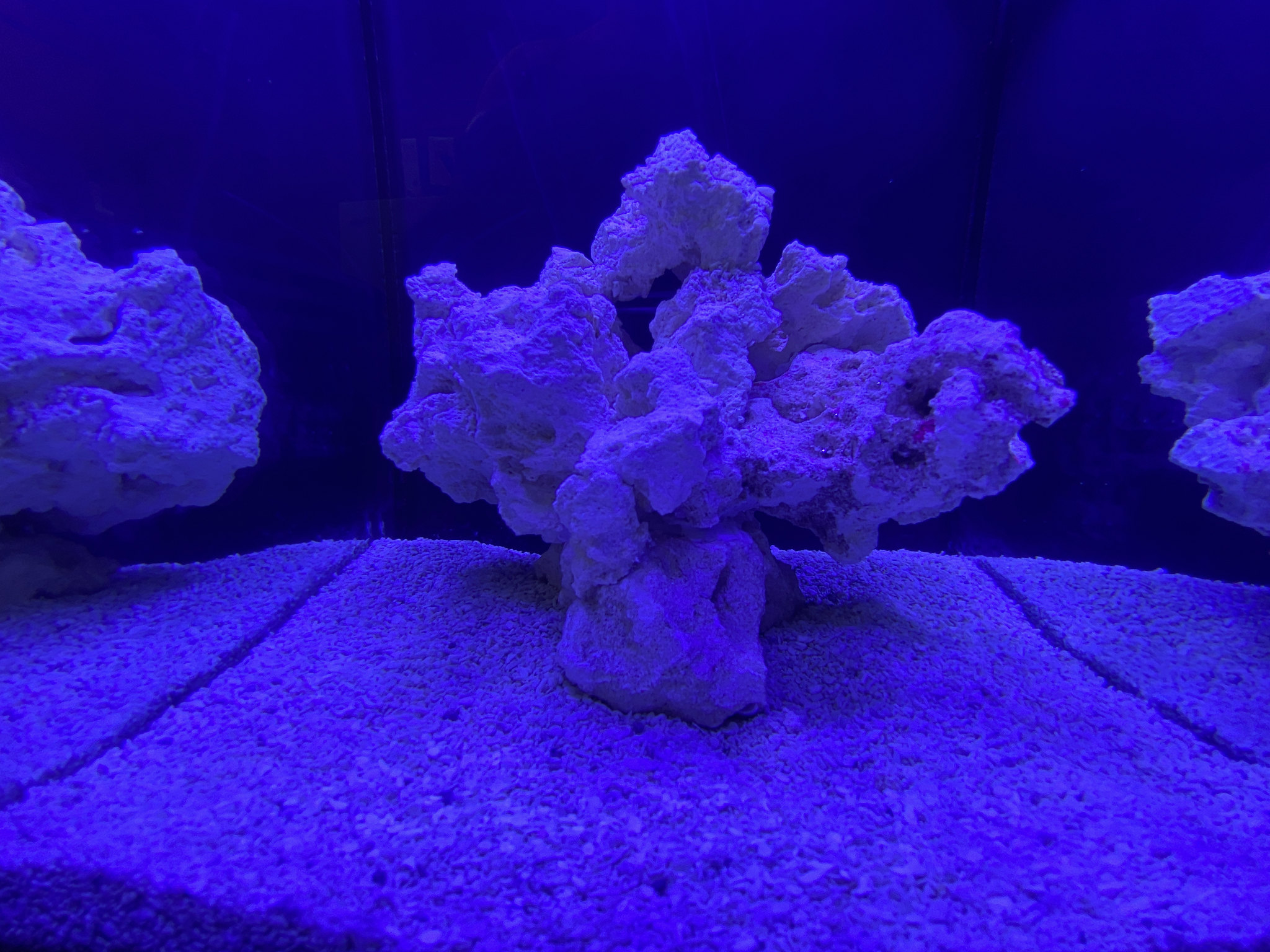 The tank seems to be pretty stable now. The only real issue is temps. Having a real hard time maintaining 78 degrees. The Fluval light runs around 85-105 degrees during the day depending on brightness so I run a little fan across it. But, the tank will drop too far if it's left on after lights off, so I have to manually turn it off and on each day - which is a pain. I really don't want to have to get a controller for this tank (I don't want to spend any more money on it).