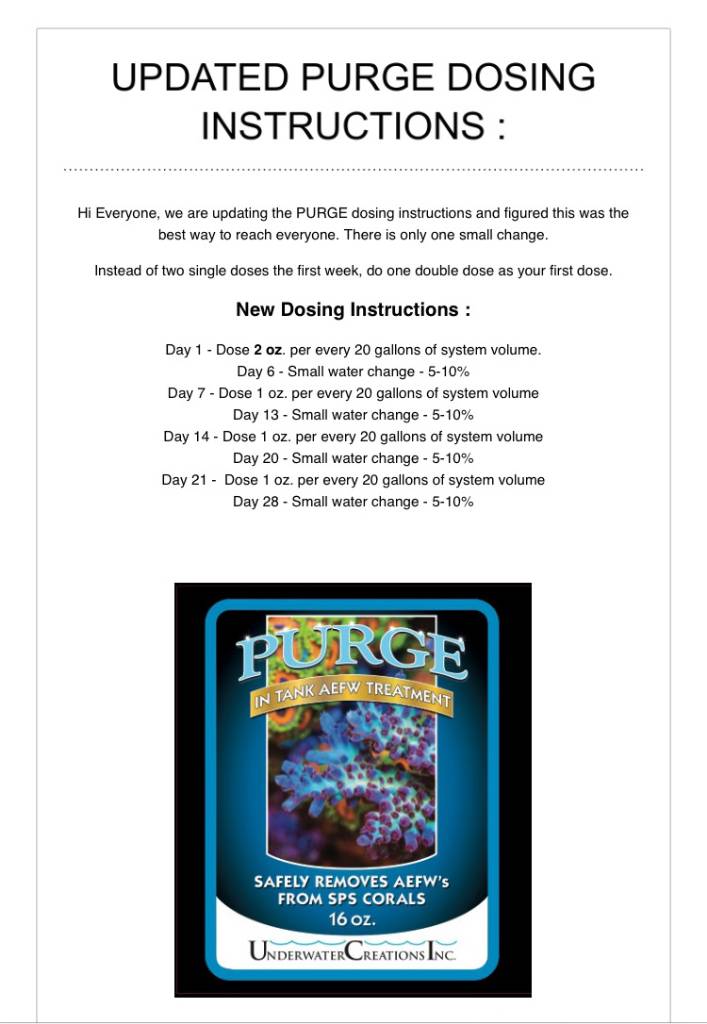 jimbob928 said:
I am not familiar with the "Purge" product you are using. Who makes it?
Click to expand...

Underwater Creations. They are still struggling to keep it in stock. Demand is a little high...
https://www.uwcmn.com/product-line

I acquired late spring some montis' from a fellow reefer in my area. About a month later found three nudi's on my glass. I netted them and flushed them. About three weeks later, found 2 more appeared. I scanned for eggs but could not find any. I hadn't seen them the last 4 months and my montis the whole time were fine.
Then in July noticed a few Aptasia and could not reach the ones at bottom as tank is 36" deep. So I ordered Berghia Nudibranch and after getting home realized I caught and dumped 5 large Berghia ( darn it). trying to play it safe
O

So are we thinking that Purge works on MENs? I am currently battling an outbreak as well.a Thanks
OP

Today would be my second treatment. As of now yes. I have had a few issues this week but I can not directly link it to purge.
M

Reefinny said:
Today would be my second treatment. As of now yes. I have had a few issues this week but I can not directly link it to purge.
Click to expand...

Thanks for the updates! And good look with the second dose.

What kind of issues did u have??

So yes - I am on my 3rd dose. NO signs of the little buggers. I did post I had some issues but I 100% can not point it to Purge. I am dealing with some algae I did not have before I started but I would rather deal with a little algae than loose another Monti.

I did loose 4 acro colonies - BUT I am no way putting the demise on purge as I have 4 tanks in my system and all of the lose was from my main DT tank. I think I have narrowed down to what had happened. I went to change out a power head. I went from a MP40 to a new Octo Pulse. Well let me tell you its one heck of a powerful powerhead. To the point they should probably have them kick on at 1% when you turn it on, not 100%. It caused a siphon of 4 year old sand (another reason I am going BB on my upgrade) to kick up and blanket my tank. I did kick the power heads to 100% to clear the water column but think I should have done an immediate WC and some new GFO as I think the blanket of sand had spiked the Phos and Nites so high he threw them off kilt. Its been a tough few months with the tank.

The reason I do not think it was related to purge as I said there are 4 tanks. I would have had losses in other tanks.

I have since stopped the bleeding (I think) probably extended treatment a little further than I wanted to, and will deal with the algae after my final treatment.
OP

I will say the way I am dosing it is slowly pouring it down my overflow upstairs (sump is in basement) I feel it gave it a better way of mixing it up as it hit the sump and went into the entire system. Like I said I have multiple tanks in my system. The only thing that seems to really not like it (besides the dead Nudis) is my Squamosa shuts tight when I first dose but usually the next day is open back up. I am contemplating dosing a little vibrant to start knocking the algae back. Love to hear UWC chime in @UWC

Totally fine to use Vibrant at the same time
OP

So other than the issue I had with my acro's that I still honestly believe was unrelated to purge, I just treated my tank with the last dose and I have no signs at all of the montipora eating nudibranch.

At the end of the week I'm going to do a decent water change get all my carbon back online, do a really good clean up skimmer, sump and hopefully start enjoying the tank again. Been a tough few months between a fish getting stuck in my drain pipe and flooding upstairs (float switch and ALD failed but that's another story) and I lost some really nice corals due to these pests and I'm glad to see we have something on the market that can eradicate them now.

That is great hear! Sorry to hear of all the issues. Really hope things turn around now for you

Any update? I wonder what's the life cycle of MENs because maybe the 4 weeks treatment for AEFW is not necessary/enough. If it does disrupt their ability to reproduce, we have to figure how much their eggs last to hatch and when a MEN is considered adult to lay eggs.

Wondering if there is any update on this as well.

I do believe they were eradicated I had some other issues at the same time that I cannot relate directly to purge. I don't have any new signs of montipora is dying I did also pick up a few yellow coris wrasse that are pretty active in the tank

Reefinny said:
I do believe they were eradicated I had some other issues at the same time that I cannot relate directly to purge. I don't have any new signs of montipora is dying I did also pick up a few yellow coris wrasse that are pretty active in the tank
Click to expand... 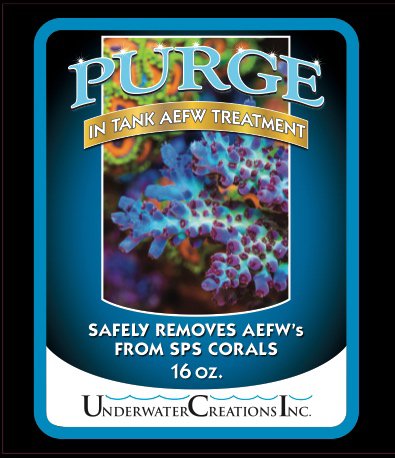 Hi, I have discovered flat worms on the base of the acro that was dying. I need to make the decision about the right treatment. Can you share how Purge treatment worked for you on the end? Thanks mate

I have not heard of this but know of flatworm exit and Pohls Fltaworm stop- both effective but must be used AS DIRECTED without overdosing.

Added Berghia nudis, but are these monti eating nudis?
2 3