So the wife and I got ourselves a Christmas present tank upgrading from the IM 30L! We are getting the Red Sea Reefer XXL 625. In our old house we had a Red Sea 450 before it was retired which happens to be the same length as the new one but not as deep or tall. We are getting it delivered in about a week and I cannot wait to get some pictures posted.

Waiting on to see if I'll need a refugium and if so still trying to decide between the Tunze refugium light and the Neptune Systems GRO refugium light. And once it comes time to start dosing I'll be getting the Red Sea ReefDose, most likely 2 of them as I'll be going with the Red Sea supplements including the trace elements. I'll most likely be dosing the AB+ by hand as I think there will be more than 7 days worth of product in the lines alone so I want to make sure it is fresh.

Sounds like a great build and remember we need pictures!
OP

Delivery is a week away from today! 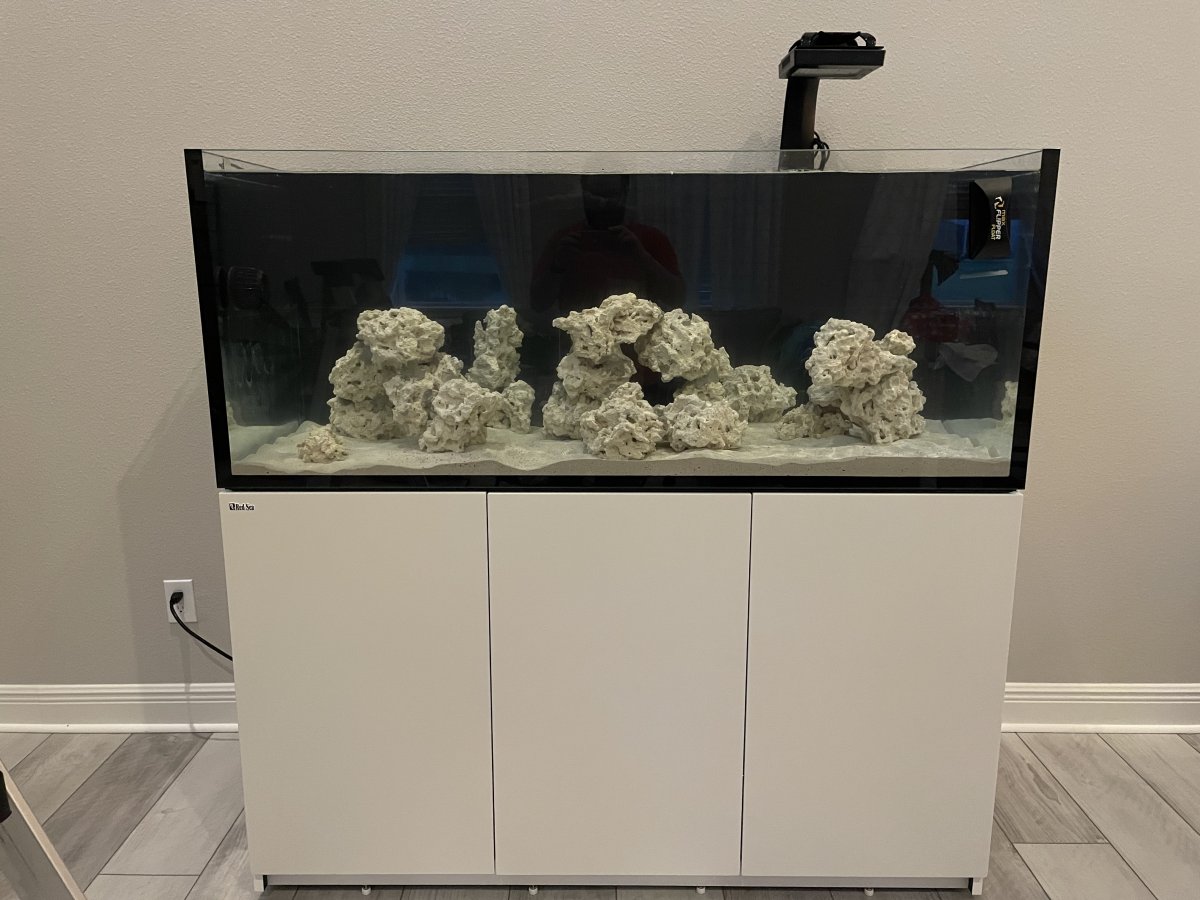 Finally got the rock structure completed! On our 30 gallon we started a few month back we were recommended the Nyos cement and that was a nightmare to use. It dries in 2 minutes but that would start from the second water tourched it so if you didn't get the mixture prefect the first time then you wouldn't have enough time to add more and mix and put on the rock. My other LFS suggested Seachem CoralCrete and I tried that and it really didn't hold so I remember seeing a few people using the Marco's cement on Youtube and remembered I saw it at WWC so I ran over there to pick up some. This was so much better and honestly I'll never go with any other product again for cement. It gives you up to 20 minutes use the product, I'd say about 10 but still more than enough. I really like that I could mix it dry to get in tight spots and wetter to just pour over and drip into holes to form a good bond. I only had to do one structure a second time as I didn't have enough cement to hold the weight, but once I did it was rock solid.

The left light arm mount is bent so it leans really far into the tank so I'll have to go and get a replacement. Cycle started today so we will see if we can match our 1 week cycle that our 30 gallon did, I doubt it as we had some live rock with that but we will see.

Looking good! how is the tank doing?

Thanks. Still cycling D: Just need the last bit of ammonia to drop then I should be able to through some snails, crabs, and a pair of clownfish in there.

Elmer. said:
Looking good! how is the tank doing?
Click to expand...

So long overdue update. The tank cycle took two weeks. Once we got it confirmed by our LFS we ended up getting a pair of purple fire fish as we already have a pair in the tank upstairs and wanted more when they are all combined. The following week we went to the LFS to get more fish and we ended up with two more firefish but the regular ones as my wife loved two of them that had really bright yellow dorsal fin. They also had a Radiant wrasse there that she also loved. Since it was eating really well we ended up getting it. The second this wrasse hit the tank he was in the sand and remained there for days before coming out. We will have to see how it does with our cleaner shrimp and peppermint shrimp as we found out after they do go after shrimp.

This weekend we were going to hold off on more fish and transfer the ones from the upstairs tank to this one as we have a trip coming up and didn't want to have two tanks going and need to buy another feeder. But another LFS had a pintail wrasse for like half what we normally see them going for and he was swimming and eating well so we picked him up as well. We ended up moving everyone but, what I think is a Crescent Tail wrasse, jumped out of the net when I was transferring him from the acclimation bucket to the display. When I grabbed him and put him in the tank he drifted to the frag rack and just laid on his side breathing heavily. After a while his breathing slowed but continued to lay there. I tried feeding after about 30 minutes and that didn't help him want to try to move. When my wife came down a bit later she saw it swimming just above the frag rack so I fed some more frozen and he shot right out and started eating and has been swimming all over the tank so thankfully seems to be doing great.

We are still trying to figure out what fish we will get next. The only one we know for sure is a Yellow Tang to help with algae. I'd love to find a Diamond Tail Flasher Wrasse. We would love a Flame Wrasse but they cannot get captured anymore :/

It is finally looking like a tank. I'll have to post an updated shot. The only ones I have on this computer are a few of the control panel which still looks like a rats nest as Amazon keeps losing the cable management clips I ordered. Just need to finish up the Automatic Water Change and set up Trident. Once the last light is brought downstairs when the rest of the inverts are moved this week all of the big projects should be done!

Awesome! How is the flow with the two MP40s? My 625 xxl gets delivered on Friday and the only thing left to get is some flow.