This tank is really looking awesome!

Thank you for making it awesome with my 10 babies!! Best tangs ever!

This is a really nice tank! If I may ask, how are the yellows getting along? I would think that that many tangs would be a bloodbath, but they all seem ok. How did you do it?

Anemone_Fanatic said:
This is a really nice tank! If I may ask, how are the yellows getting along? I would think that that many tangs would be a bloodbath, but they all seem ok. How did you do it?
Click to expand...

Thanks for commenting. We had a lot of aggression with the school of yellow tangs early on while the fish were still young and getting settled into the tank.

They were 1.5” - 2” in size and still developing color. One in particular was a bully - he was the middle sized fish of the group and we named him Bruno. Bruno is now one of the largest fish in the group at about 3”. He settled down since his earlier bully days back in January. He’s still the leader but keeps the peace and balance in the group making sure everyone follow the pecking order. lol

Bruno is also missing a scalpel when he faces to the right.

That first month though I had to keep them fed non stop to limit the fighting. As a result my rock was nasty with green hair algae but it worked because the fish were able to stay busy grazing the rock and I didn’t have corals yet.

That was key while they were young - over feeding.

Once I began adding coral to the tank I started backing off on feedings and added a few key rocks to increase some of the hiding spots and tunnels for the the smaller tangs. They still have spats and I’ll see tethered fins at least once a week but they always heal quickly in a few days.

So far I haven’t had to intervene and there hasn’t been any flesh wounds. I’ve always been prepared to remove a few just hoping that I don’t anytime soon.

ONE MORE KEY POINT - adding them all at the same time helped big time! Here’s the vid the day they went in:
OP

Starting to look at this reef tank as a whole with the entire room. Have some paintings coming in next week as well to go over the tank. Part of building reefs for me is also considering the room/space to find total peace. 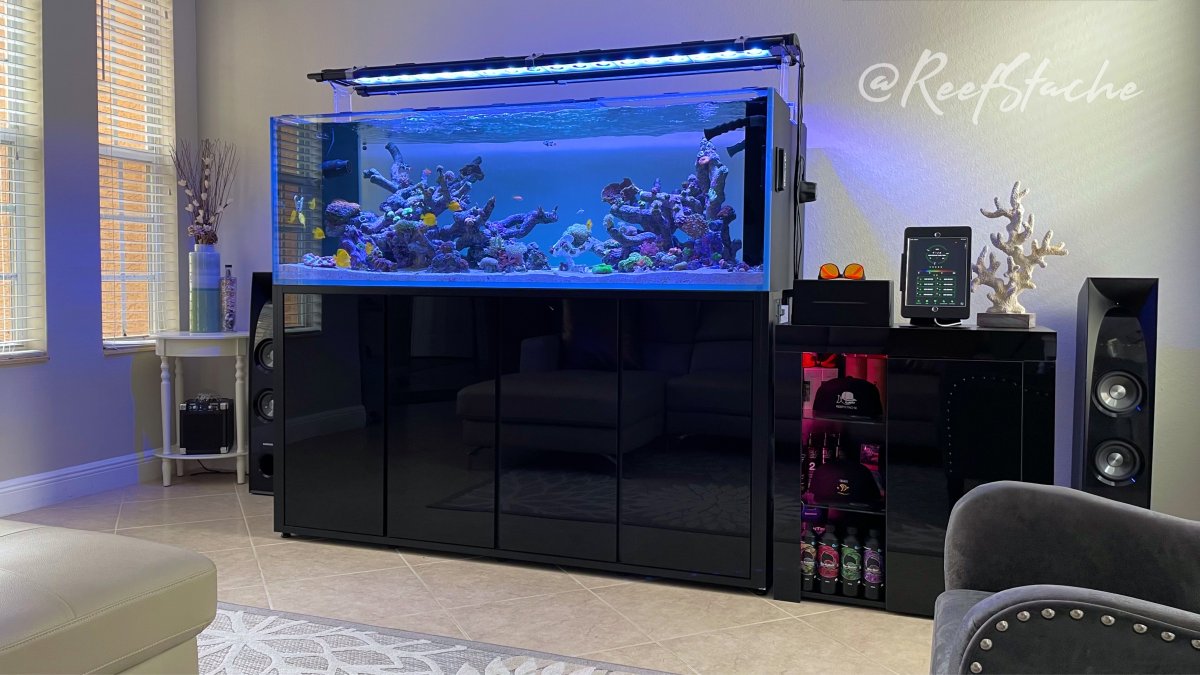 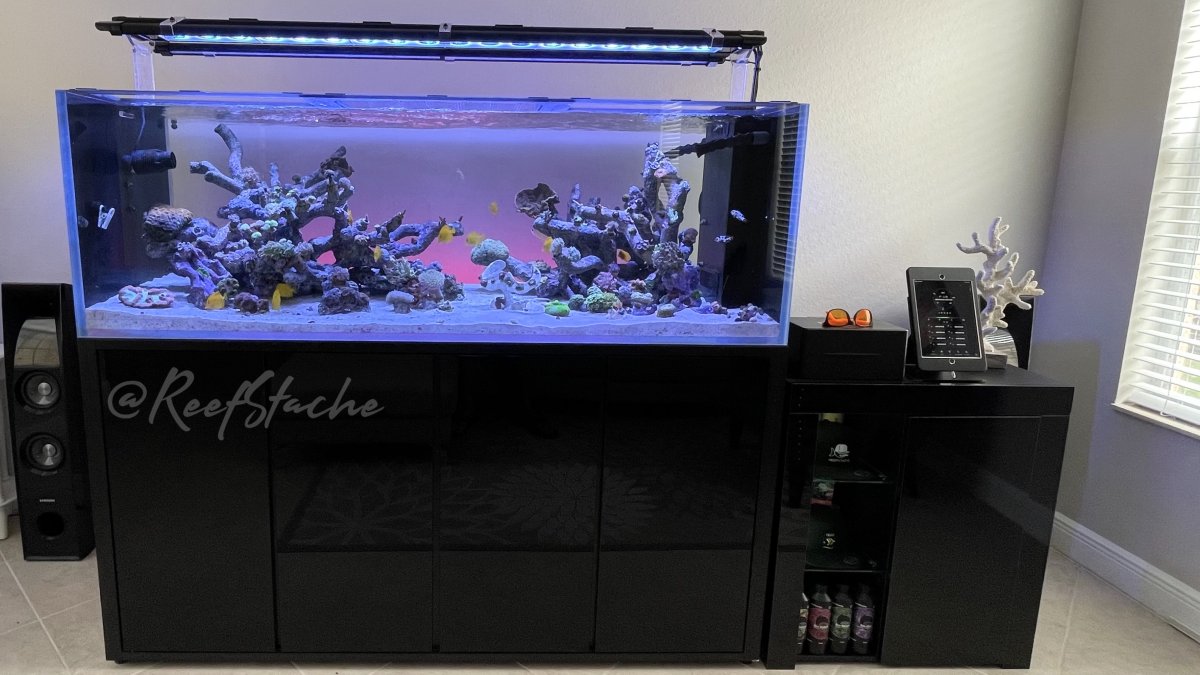 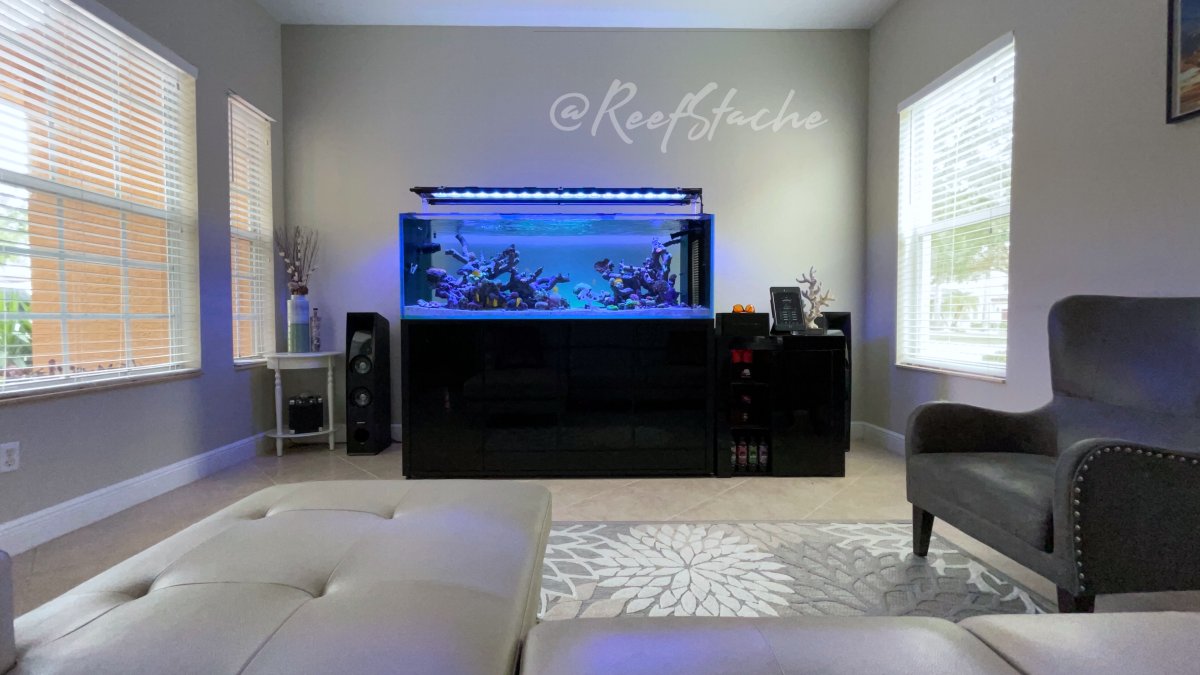 We live streamed the reef tank for 10hrs the other day!!! The yellow tang school / shoal was very active during the livestream. You can also see the other captive bred fish brought in from Biota throughout the vid.

ReefStache said:
I swapped my clear CADE jump net with a black one. 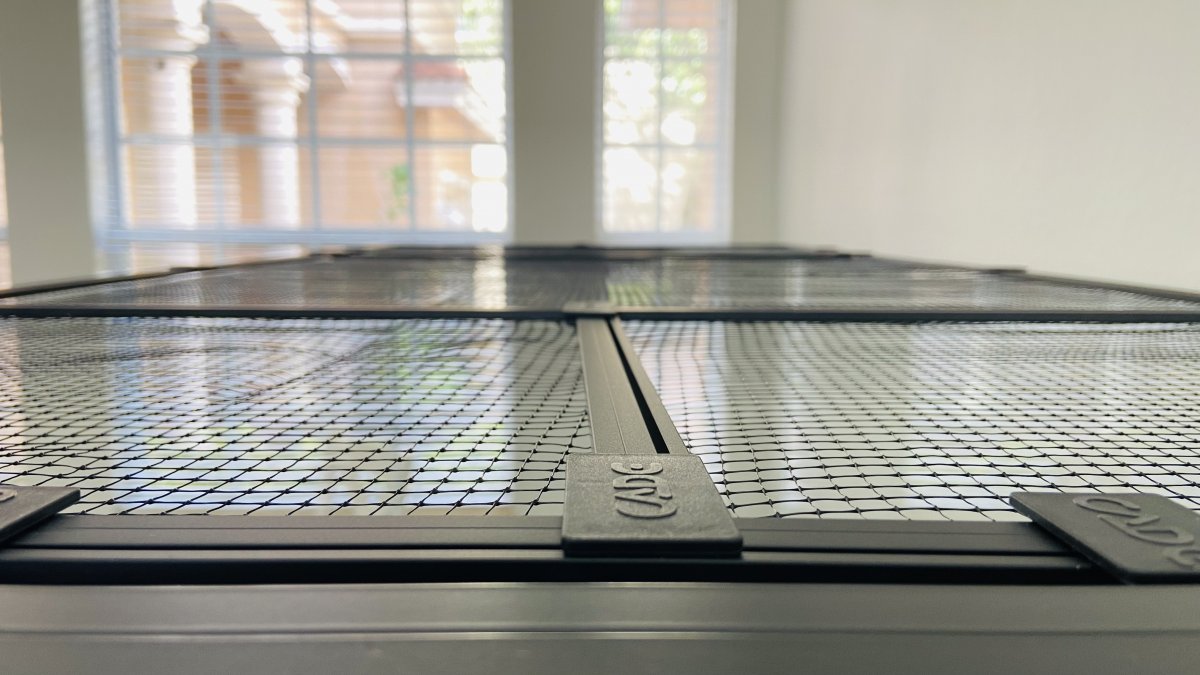 I ended up having a custom lid made. I also didn’t hang my light.

Great build thread. Im learning a lot. I coincidentally am setting a Cade 1500 s2/p. Im really wanting to drill into the ATO section in order to use that space for a refugium. Do you think that glass between the skimmer section and ATO reservoir is tempered?

@ReefStache how are you getting water into your mangrove garden? Did you drill though the reservoir?

I want to use that area as a fuge.
OP

Isaac Alves said:
@ReefStache how are you getting water into your mangrove garden? Did you drill though the reservoir?

I want to use that area as a fuge.
Click to expand...

I’m using the ATO section as fresh water now for ATO. I was keeping my mangroves in that section but it was temporary and as a stand-alone - nothing plumbed.
OP

We are streaming the reef tank live… new fish from Biota too.