Mjl714 said:
Really enjoying your build thread. I have an IM 30l AIO, which we set up in April, 2018. We really like it for our kitchen viewing tank. I’ve grown to love the shallow height for many reasons especially easy cleaning and direct feeding of my cleaner shrimp and others. You mentioned the top frame corrosion risk, mine is plastic so no rust and has held up very well. I removed the original netting and replaced with a thinner less light blocking material. I don’t use a skimmer, just water changes and normal cleaning maintenance. My challenge is keeping nutrients up to desirable levels. Your rock work looks beautiful I really like the depth and openness of your design.

I could go on, but suffice it to say great job, and good luck with your system.
Click to expand...

THANK YOU!! so many nice words

i spent the day hmm and humm about a QT tank. I found a Topfin 10g setup at petsmart for $80. I’d rather spend $80 on a QT then have anything happen to my clowns. Plan to pick it up tomorrow and put the filter media in my sump to get it cycling.

saramachen said:
THANK YOU!! so many nice words

i spent the day hmm and humm about a QT tank. I found a Topfin 10g setup at petsmart for $80. I’d rather spend $80 on a QT then have anything happen to my clowns. Plan to pick it up tomorrow and put the filter media in my sump to get it cycling.
Click to expand...

Another great idea. I keep old bacteria laden sponges in the sump of my 75g, and whenever i need i toss sponge into qt. These sponges never go back to dt‘s.
OP

My All For Reef is done mixing I beleive. I purchased a magnetic stirrer and it took like 4 hrs for it to completely clear up.

My salinity is still low, I have some saltwater in my ATO right now. I tested tonight, not much change, I’ll test again in the A.M.

The Refractometer is hard to read with my indoor lights. It works amazing when I point it out my kitchen window. *almost* makes me want to get a probe.

speaking of probes, when I tested PH I turned the thing on, and suck it in the water and it was reading 3.9. I PANICKED, then realized I forgot to take the cap off the probe.

The Cheato must be doing it’s thing cause I have lower Nitrate/Phos levels then I did Saturday I did a water change. I feel like I feed “heavy” with 3 feedings a day (1/2 cube of Brine shrimp x 2 and pellets). They always seem hungry LOL but I don’t want these Diatoms to turn into some other sort of nasty algae. So I guess the game of nutrient balance begins.

I hate water changes without this.

I picked up the 10gallon tank for my QT today, ordered some filter media on Amazon and started to research copper options in Canada (limited) and other QT methods. And now I’m half tempted to just return the tank and take the chance.

Reading the response the last couple
Days from Tropic Marine. I think I’m going to switch salt. However - they stated it only affected certain gallon size packages from
Turkey. I know my bucket is from Turkey, but it says 25kg not how many gallons - so I went back to my receipt and discovered an error. I ordered a 100gallon box and they gave me a 200kg tub. So now I feel bad! However this salt has the potential to be detrimental to corals I plan to add to the tank and I don’t want it. if the issue never came up, I would have never noticed. I’ll probably the call the store, the guilt will eat at me.
Last edited: Feb 2, 2022
OP

I think I have talked myself back off the ledge with the QT.

I ordered some paint for the bottom and back of the QT, and some PVC hiding spots.

On my DT I have bioballs in both media caddys. I am going to take them out of 1 side, and replace it with 30ppi foam - I actually think it might be better, the balls are too big for the small caddy, I didn’t realize this when I bought them. Those bio balls can go in the QT tank to help kick start the cycle. I am going to take some bio balls, put them in a nylon bag and toss in the return chamber so that the next time I need to QT I have some easy to grab.

I am assuming I have enough rock and sand that taking out a few bio balls will not disrupt the bio load on the tank.

however I don’t think I’m going to run copper off the bat. It’s going to be a observation Qt tank, and if I need to treat go from there.

We have been blessed with a snow day! Which gives me a day to catch up on some of my school work, and get this QT tank going.

I did my first all for reef dose yesterday, I was thinking of testing every other day. I have read it can take a while to level itself out. I have also been told to test both Alk & Cal but to gauge dosing amounts on Calcium levels.
OP

There is no going back on the QT Tank now. Bottom painted white, back painted black. The filter is currently running on the sump of tank with the bioballs from my tank and a peice of 30ppi foam.

however - this QT tank should be quick to set up/take down if purchases are decently planned. And I have all things I should ever need for it.
Last edited: Feb 4, 2022
A

Hi there fellow Ontario reefer! I'm just getting back into the hobby after an 8 year break, and it's been a lot of fun following your build thread. I've pretty much landed on getting an IM Nuvo 25 lagoon as well, so really looking forward to seeing your progress!

Especially interested to see what your experience is with the Intank fuge basket and chaeto. A mandarin is something I would love to keep too, and it will be interesting to see how effective and easy to maintain the fuge will be.

crap, I don’t want 0 nitrates. I’m guessing it’s the crazy growing Cheato in my mini Fuge.
I will have to google but maybe if I harvest a bunch of it they will increase, I have double now, then what I got 2 weeks ago.
But I have Pods in that fuge and I don’t want them to be harvested too.
OP 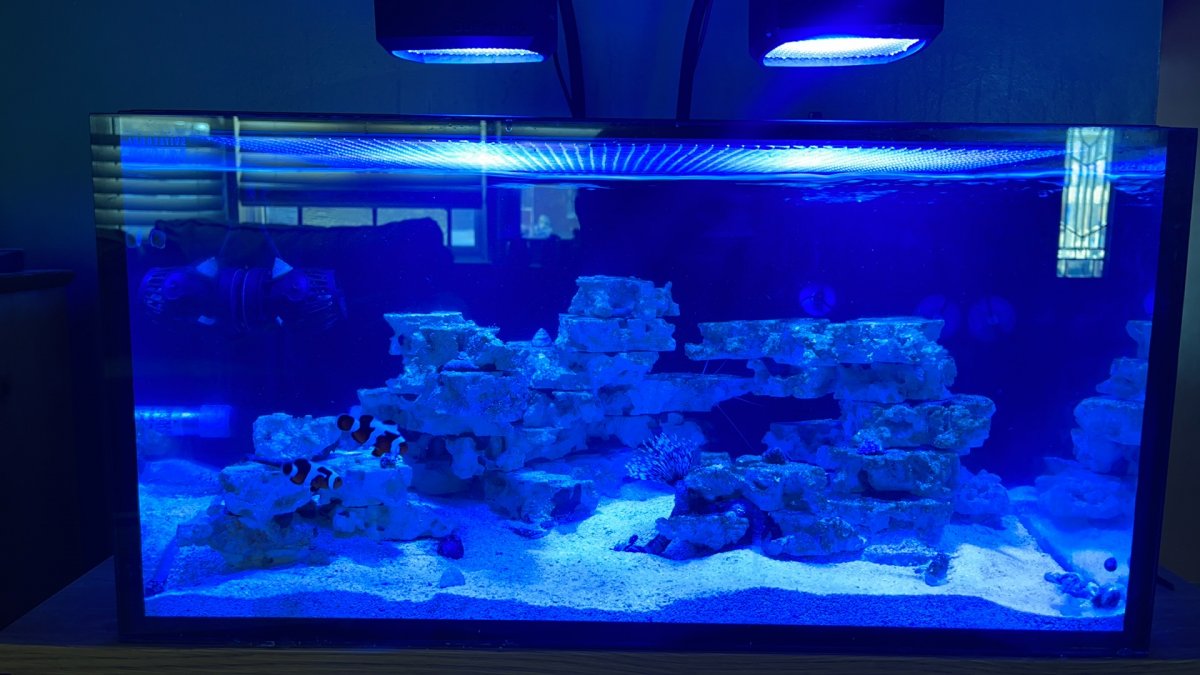 Water change day.
I also took the zoa frag off the frag plug and glued right to the rock. May have been a mistake, but I was unable to cut the stem off the plug after trying bone cutters, razor blades and a serrated knife. 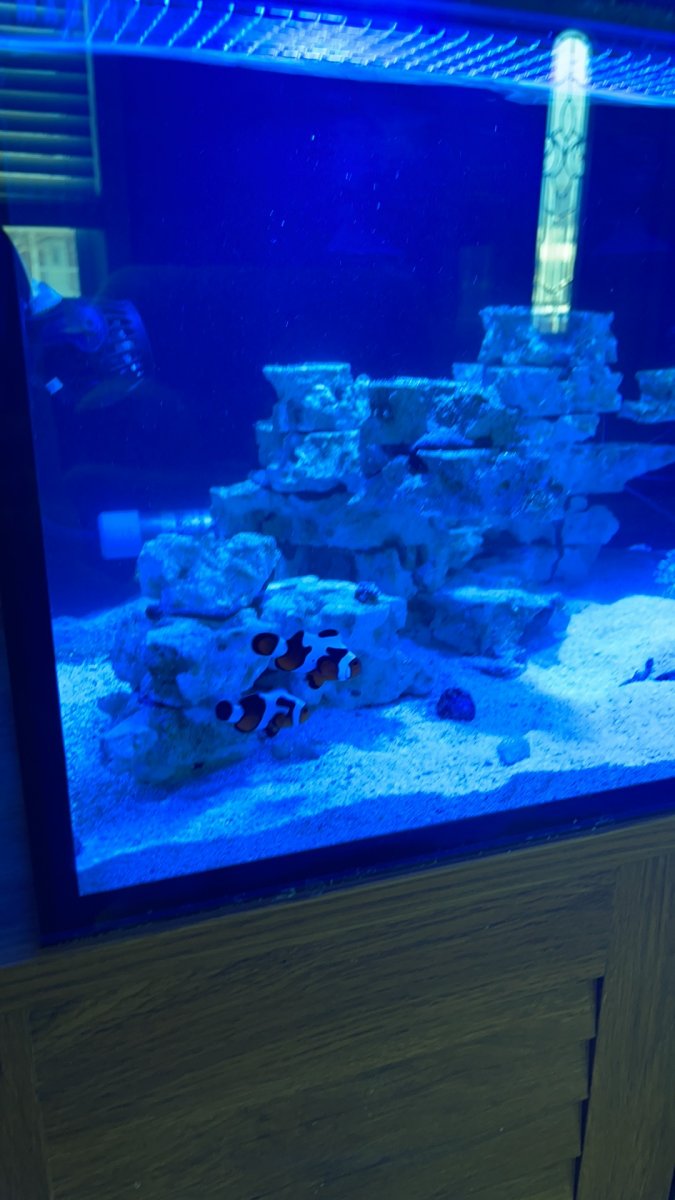 I harvested 1/3 or my Chaeto. I took out about as much as I put in originally. 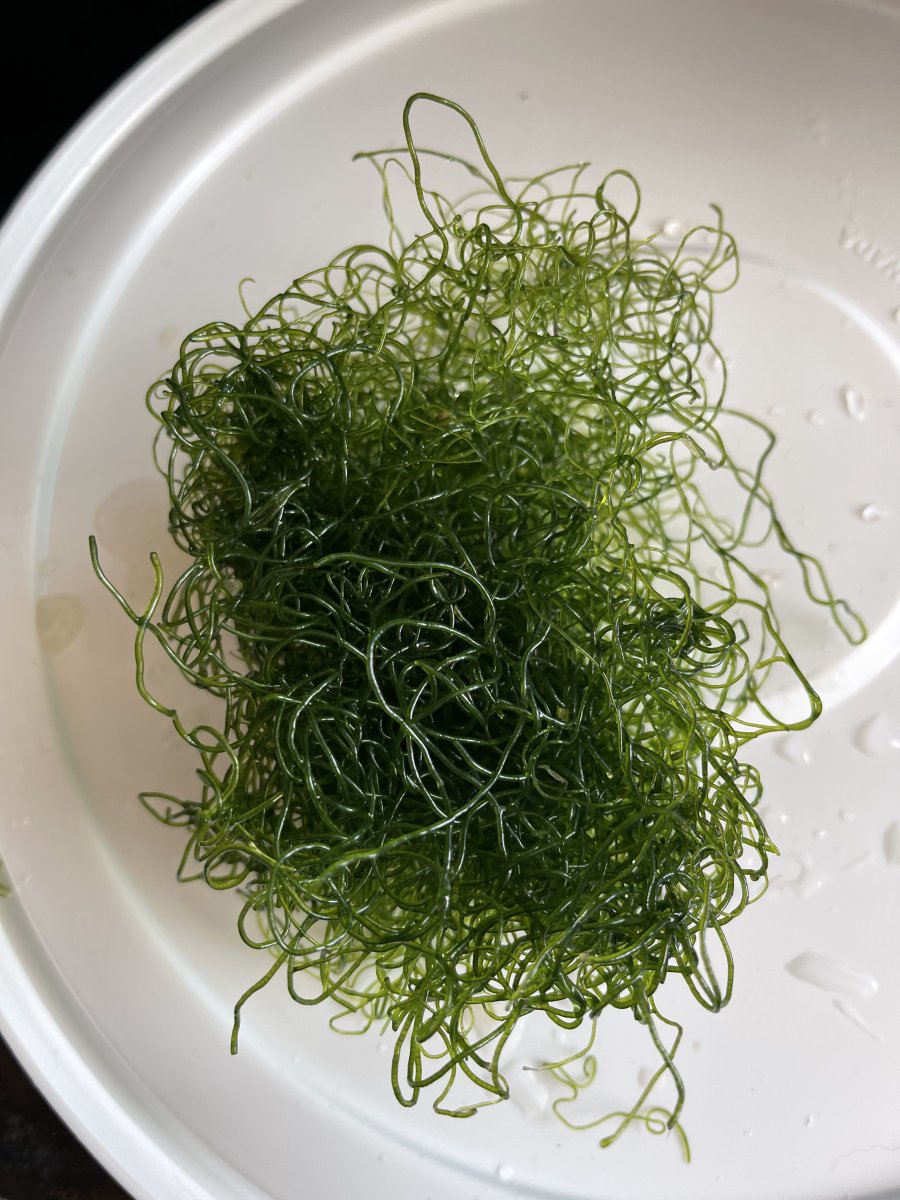 and for the 10th million time i reaarmged my power heads. Honestly, I might have it this time! And the clowns look much happier swimming in the front, rather then hiding in the back!

My cleaner shrimp molted again. That’s 2x since I got him 22 days ago. 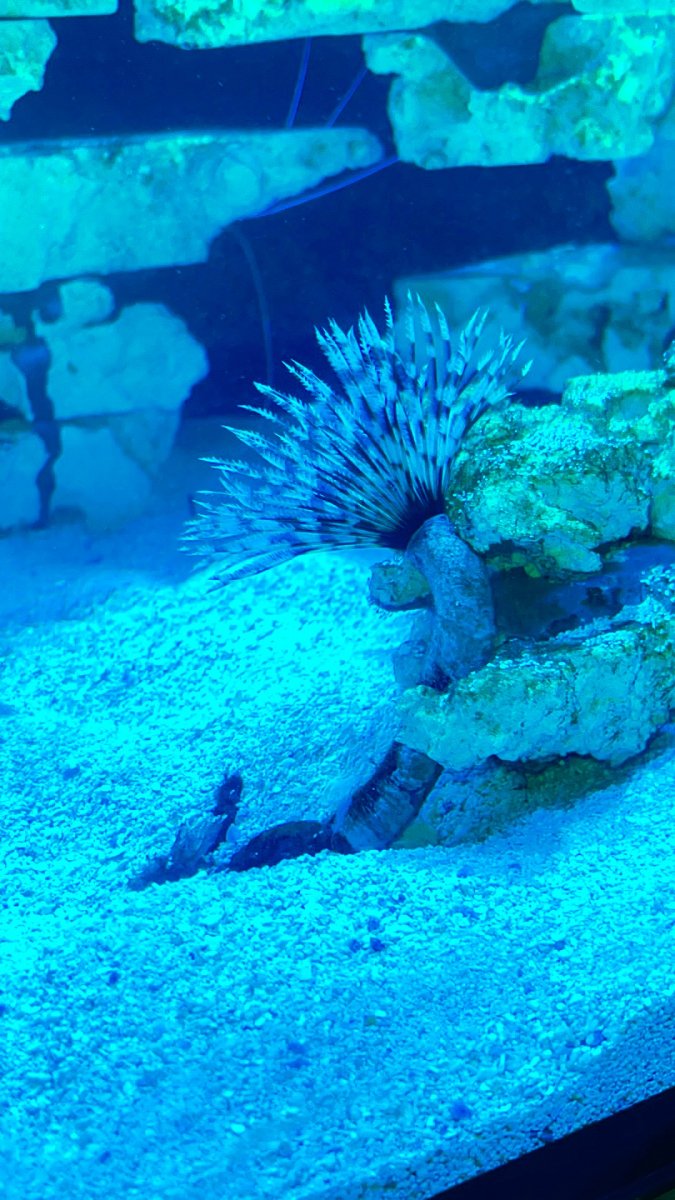 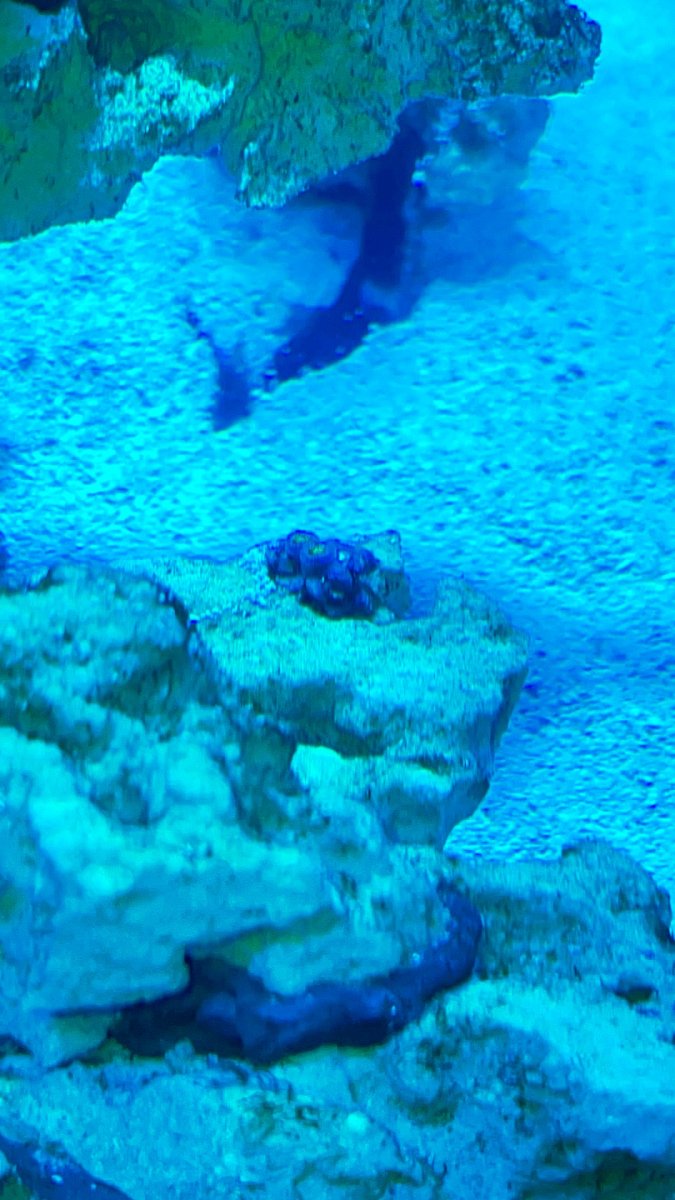 I was going to test Cal & Mag, but we had guests over for my kids birthday and now I’m too lazy.

Did my cal & mag tests this morning:

I am going to decrease the All for Reef dosage to 4ml from 5. I don’t think I want the Magnesium # getting much higher, and the Calcium level is ok. I don’t really having much “using” the Cal & mag at this point tho.
OP 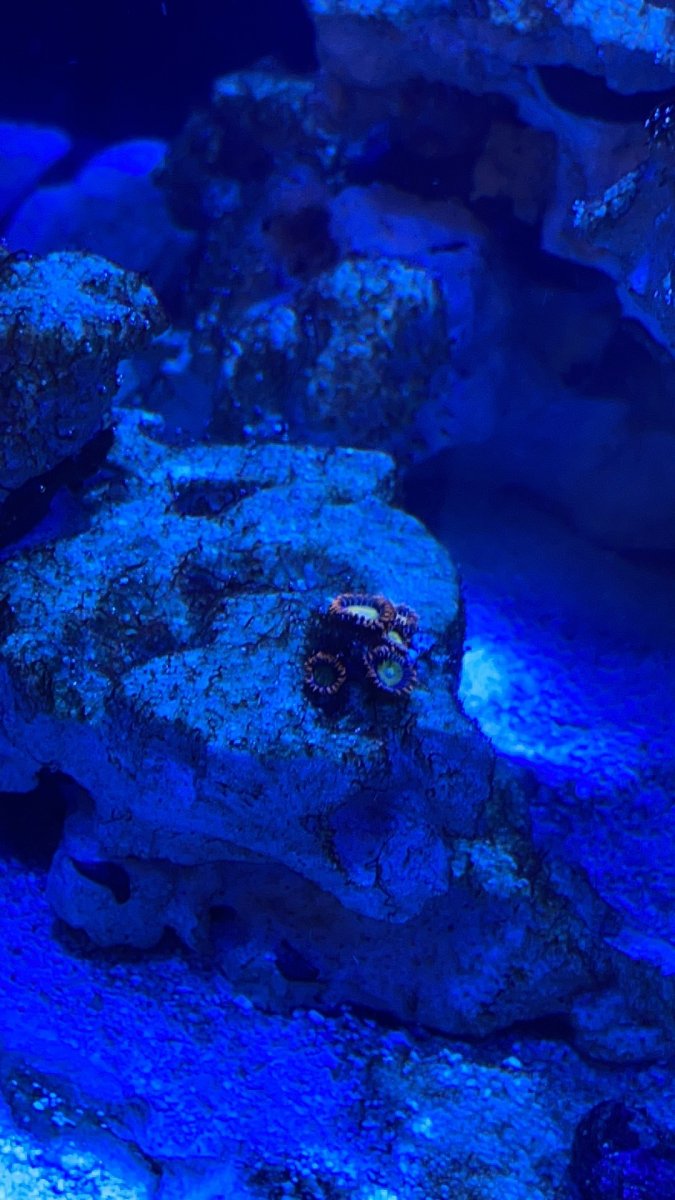 Last week I glued these zoas to the rock, and after rearranging the power heads they seem to be more open then they ever have.

I did catch my emerald carb picking at them a couple times. I think he was just going for the algae on the frag plug (which is why I removed it). There is LOTS of algae for him to eat in the tank, deep in the ugly phase right now, but I have started to feed him with brine when I feed the clowns. I use a long “Turkey baster” type feeding tool. So long I can put it throw the mesh screen and deliver directly to each animal. The shrimp and crab both recognize it as the bringer of food. The clowns do not like it it scares them for whatever reason. So for them I just drop it to the surface - which also startles them lol

I removed half the Cheato and fed a few more pellets then normal the last few days, trying to get those #s up just a bit. I also increased the amount of phyto I was feeding, as I want to feed the pods I added (although I don’t see them ANYWHERE) and the feather duster. Don’t need these diatoms/hair algae turning into anything even uglier.

I swear the feather duster has gotten bigger in the last 2 weeks too.
Last edited: Feb 9, 2022
OP

Put water in the QT tank tonight. Mixing the salt right in the tank lol. Tomorrow morning I will move the filter that’s been running on my DT for a week over. I wanted to go get a fish this weekend, but it might have to wait a few more days. 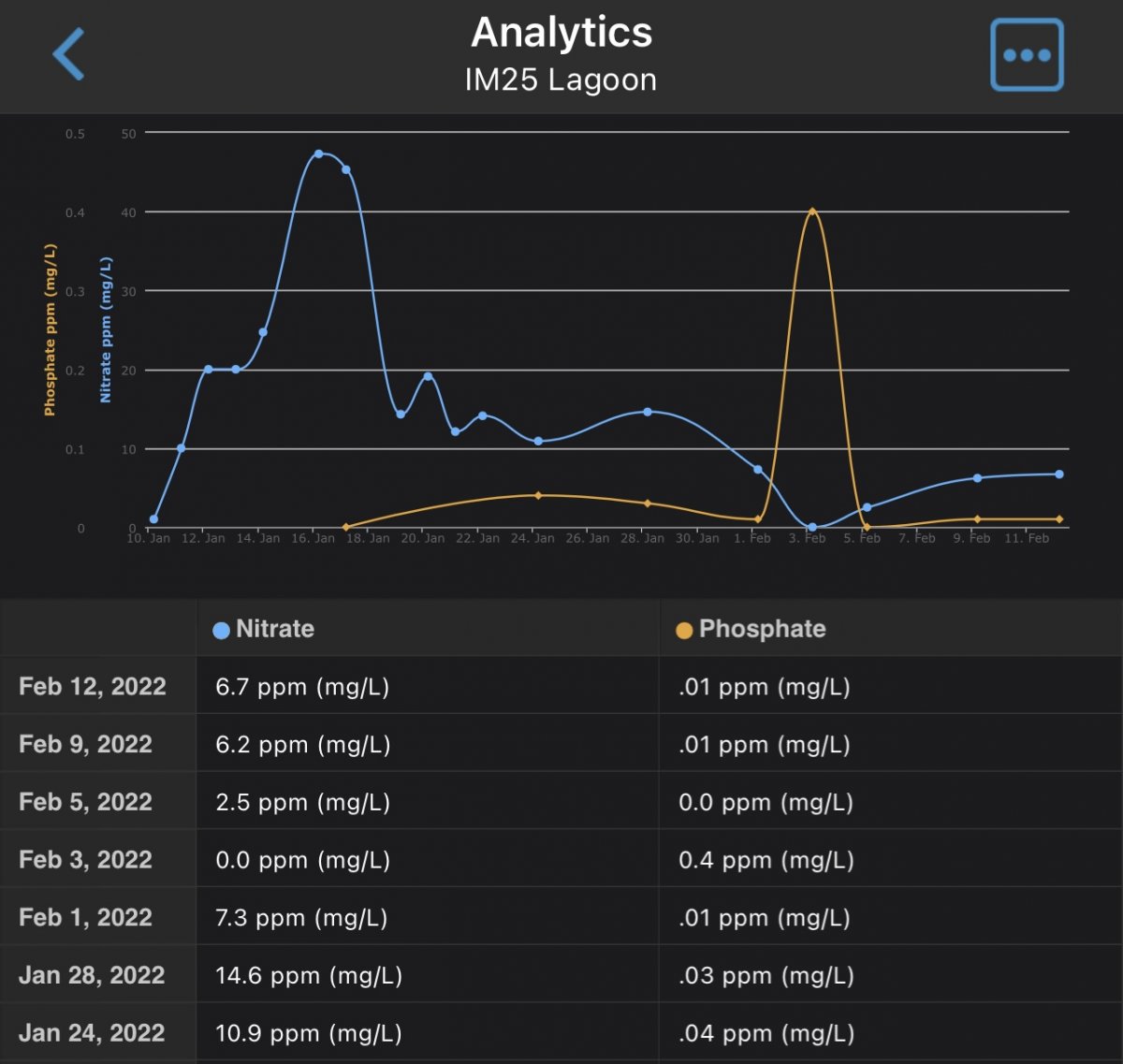 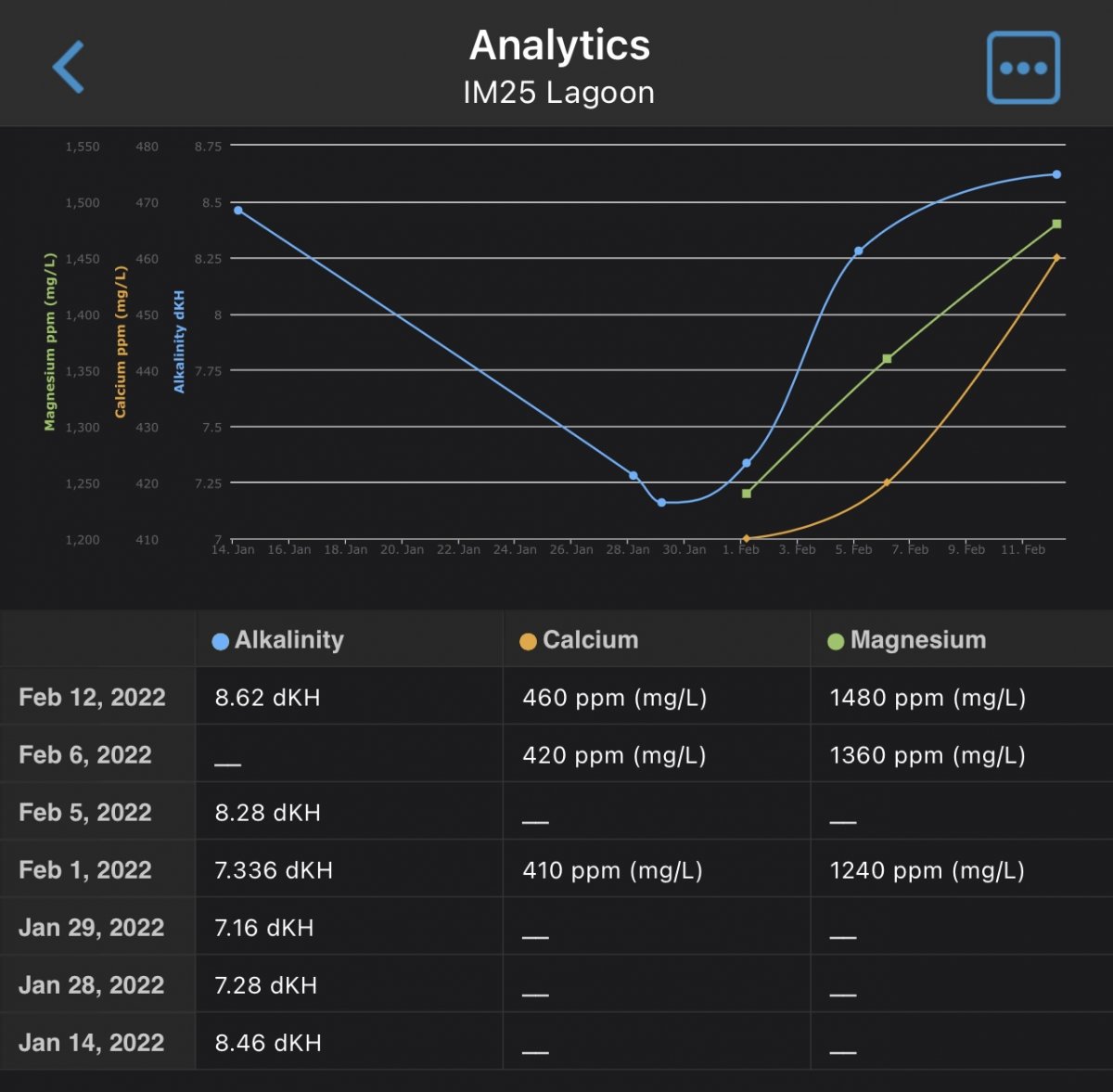 I’m going to decrease the dose of all for reef to 3ml, I’m currently dosing 4ml. Hopefully Alk will continue to rise just a bit, but I don’t need Cal & Mag any higher.
OP

On the weekend when I realized I wouldn’t be able to go get my fish, I decided to dose the QT to make sure it had a good cycle. But now I regret, cause it’s still between 2 and 1.2ppm lol.
I guess it’s a good thing, but ughhh. The lfs doesn’t carry Fritz turbo start otherwise I’d go get some and dump it in today. Maybe I’ll call to a couple stores in a near by city.

Welcome back to the hobby, I'm rocking a 25 Lagoon also. Doing a mix reef so both my AI prime HD16s are maxed out right now, highly suggest you get a par meter before adding corals. I bought a par meter for this exact reason and now... I have a XR30 waiting for it's mounting arm to get added. Right below the water line I'm only getting around 350.

Water change day.
I also took the zoa frag off the frag plug and glued right to the rock. May have been a mistake, but I was unable to cut the stem off the plug after trying bone cutters, razor blades and a serrated knife.

I harvested 1/3 or my Chaeto. I took out about as much as I put in originally.

and for the 10th million time i reaarmged my power heads. Honestly, I might have it this time! And the clowns look much happier swimming in the front, rather then hiding in the back!

My cleaner shrimp molted again. That’s 2x since I got him 22 days ago.

What kind of light do you have on your refugium? What schedule do you run it on? I just setup duel refugiums in my IM 30l.
OP

ncmonserud said:
What kind of light do you have on your refugium? What schedule do you run it on? I just setup duel refugiums in my IM 30l.
Click to expand...

I have the Innovative Marine 9w refugium light. I run it 10pm to 10am.