So I’ve been in the hobby for a while, and some old timers may remember my coral farm – North Star Corals (if anyone has frags from my babies, please message me as I’d like to get some of them in my new setup), but this will be my first tank build thread. So back in the day my wife and I decided to leave the frozen tundra of Minneapolis which is where I had North Star Corals in the early 2000’s. We moved to the Tampa Florida area where I set up a 120 gallon SPS tank. That went well for a few years, but then I decided to take a break from reefing as we were travelling a lot. In 2011 I had an unplanned career change, and we decided to move to the Florida Keys where I could dive just about every day when I wasn’t working. I set up a Red Sea Reefer 350 in 2016, and it was really doing well on 9/9/2017. Unfortunately on 9/10/2017, a Category 4 Hurricane named Irma decided to visit my little island of Ramrod Key, and absolutely destroyed it. We were without water for 17 days, and without power for 28 days. I could not get enough gas to keep the generator running, and lost the entire tank after 7 days… Fast forward a few months, and we decide it was time to move again. I love the desert and grew up out West, and my parents live in the Phoenix, AZ area, so we decided that there were probably fewer hurricanes there, and that’s where we decided to make our home. Because home prices are MUCH lower in AZ, we went from an 1,100 square foot stilt home to a 3,400 square foot home in Surprise, AZ which cost us half as much as our Keys home… I think you know where this is headed… bigger house = bigger tank! That’s just math. So now we’ve arrived to the current time period, and I am setting up a Red Sea Reefer 750 XXL. This will be a full blown SPS tank.

Controller: Neptune Apex with all the bells and whistles

Alk and Calcium maintenance: DaStaCO2 Model A-2 Calcium Reactor Contolled by an Alkatronic.

CO2 scrubber hooked up to skimmer to keep PH up.

So first the sad stuff. Here are some pictures from the storm that changed our lives forever...

Our street the day before Irma 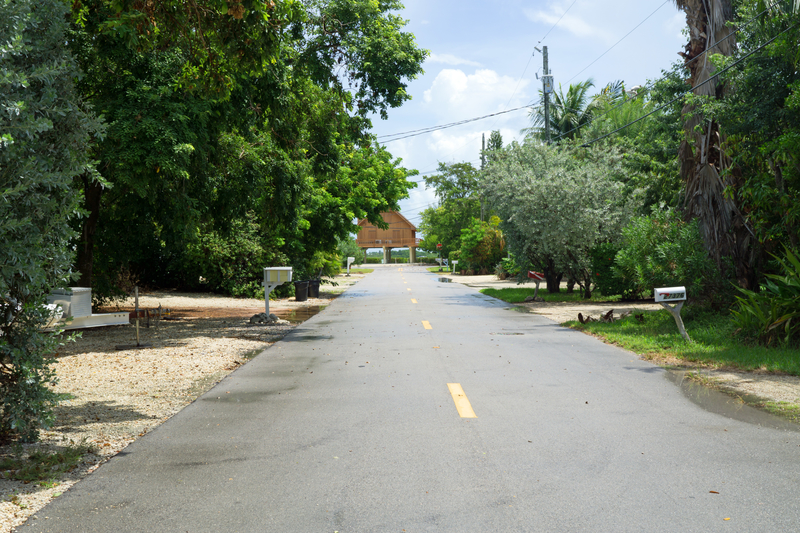 Our street from close to the same spot the day of Irma after the storm surge had receded. 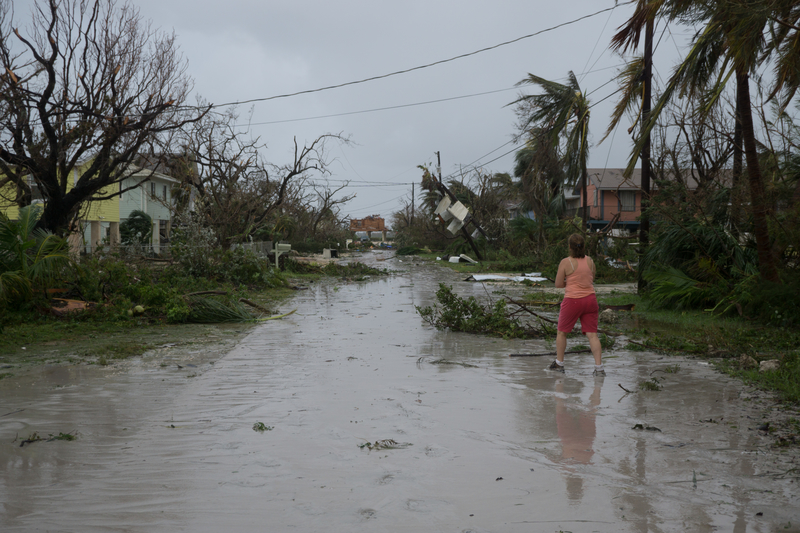 View from our deck - 54" of storm surge above the ground - over 9 feet total storm surge on Ramrod Key. 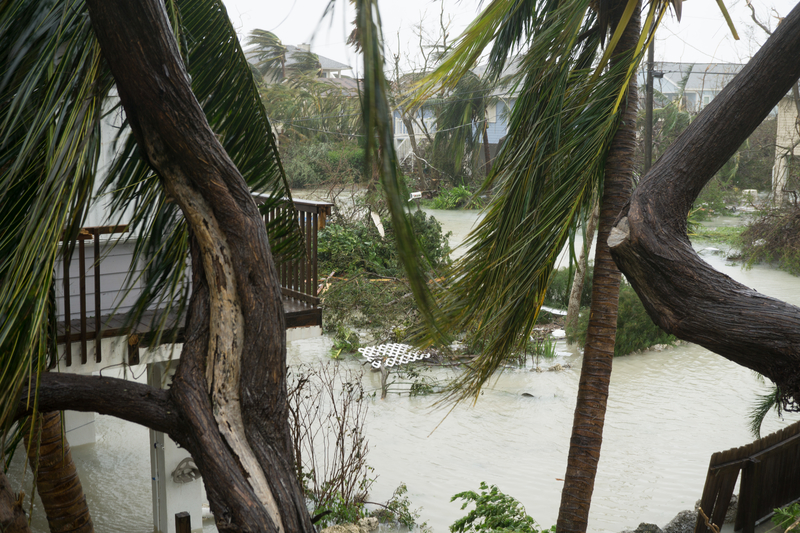 view of our side yard from our deck. We lived on a boating canal, and you can't see where the canal is because the water is so high. 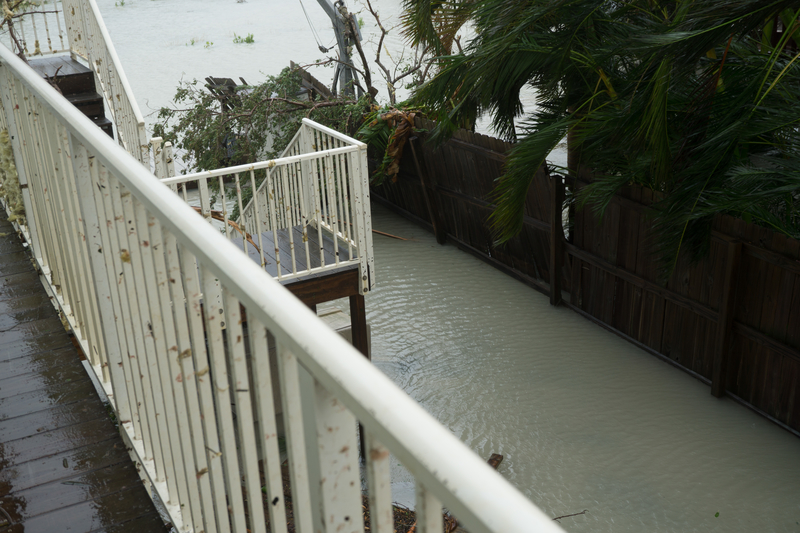 The storm surge took my jet ski from the trailer in the front of the house which was chained to our fence, floated it all the way around the house, and deposited it upside down on my boat trailer. Major PIA to get this resolved after the storm. 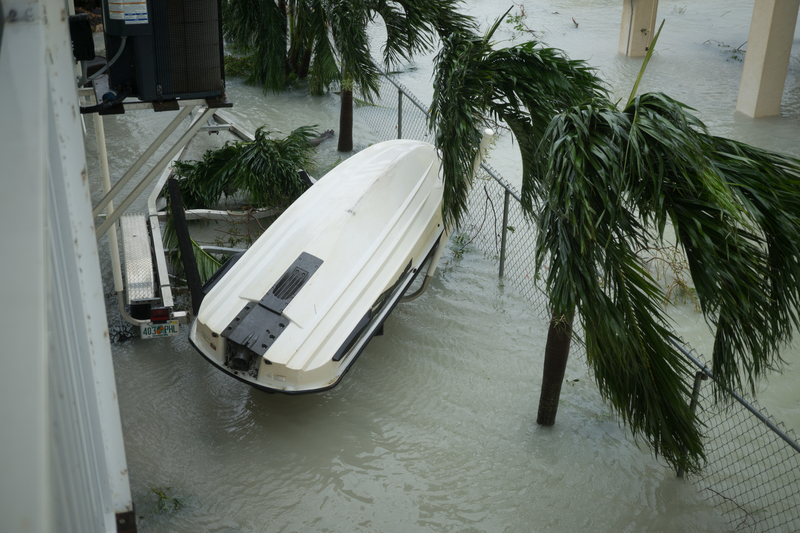 Some more pictures from Irma

This was a stilt house on our street. The living area is completely gone - deposited in the neighbors driveway primarily. 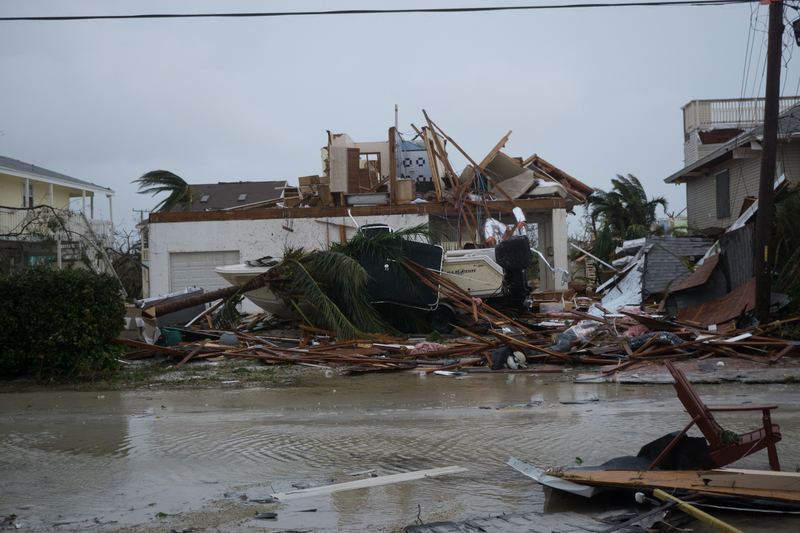 This house was at the end of our street. Quite a few news broadcasts happened in front of this house and the first picture. 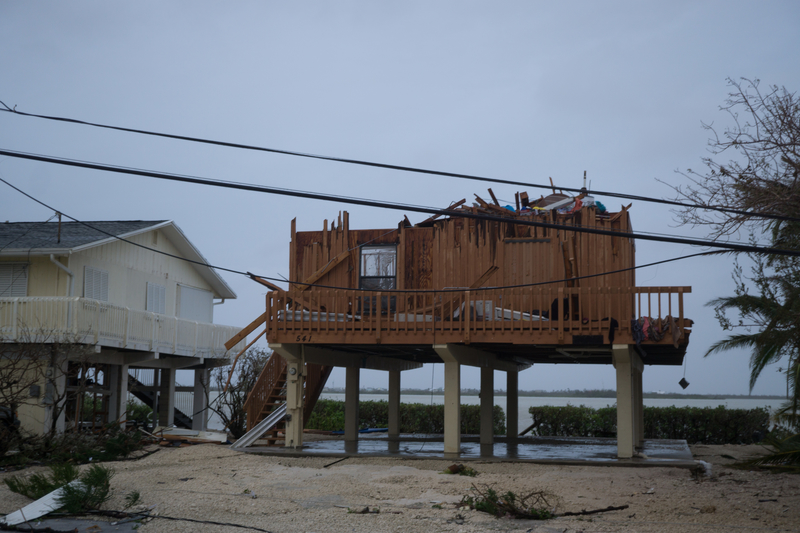 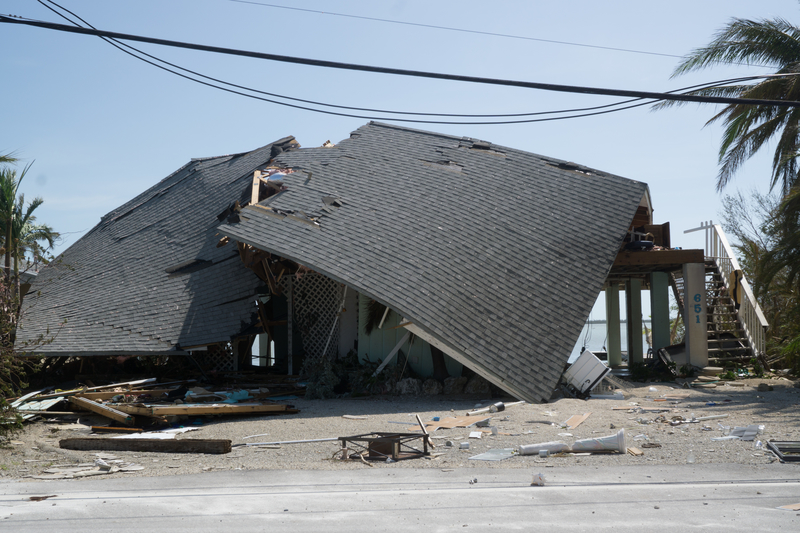 A picture of the radar from my cell phone when Irma made landfall. We were at the blue dot. Unlike most, we did not evacuate. I have now evacuated permanently... 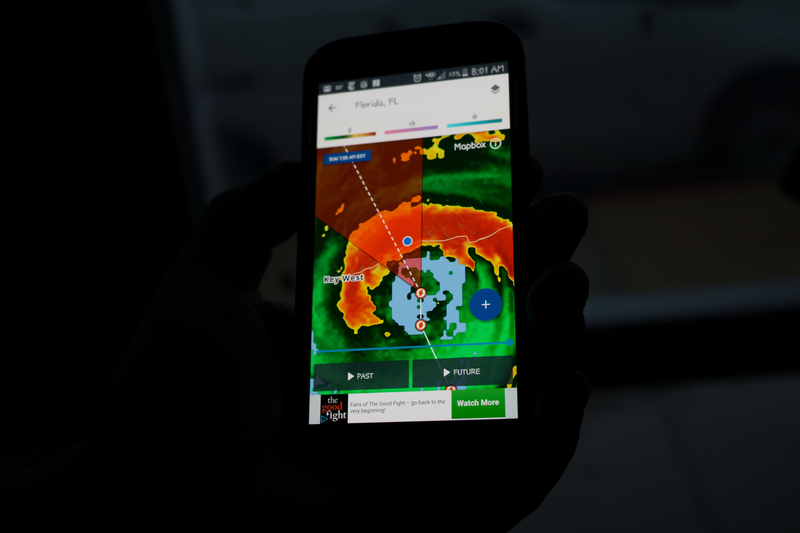 My Reefer 350 the day I ran out of gas for the generator - 7 days after the storm...RIP 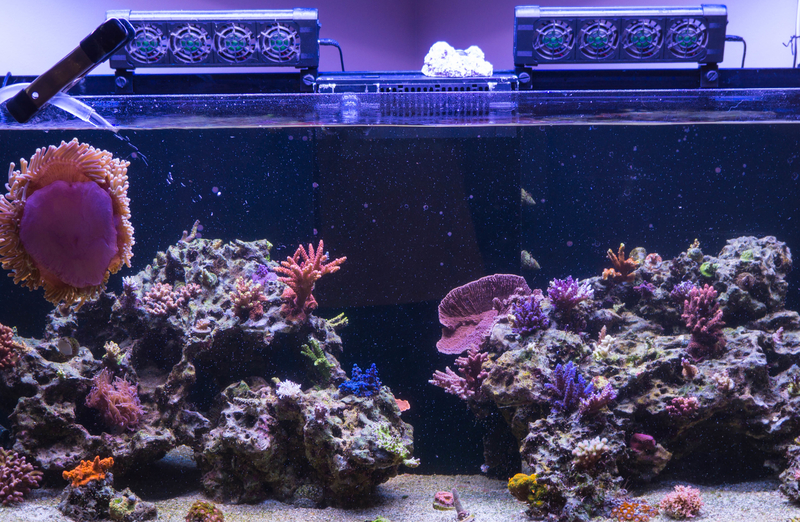 Now for some positive stuff!

Aquascape with no lights - dry 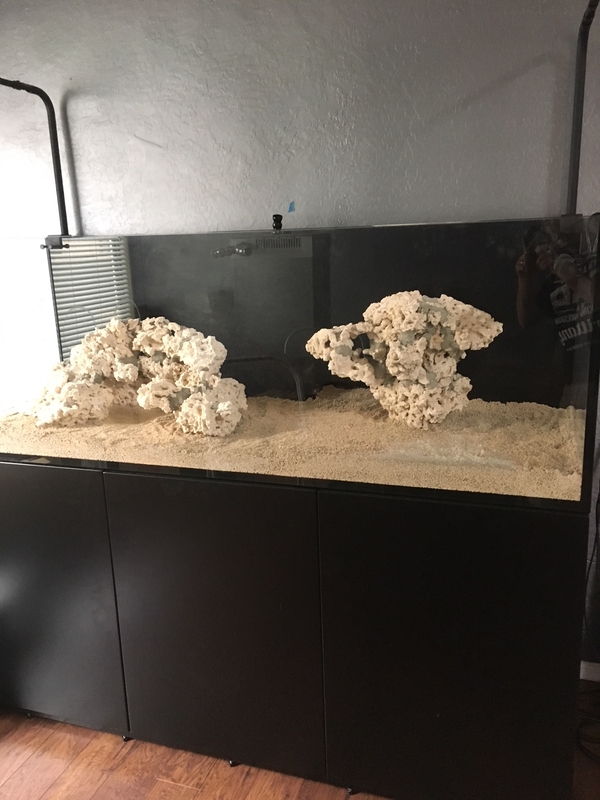 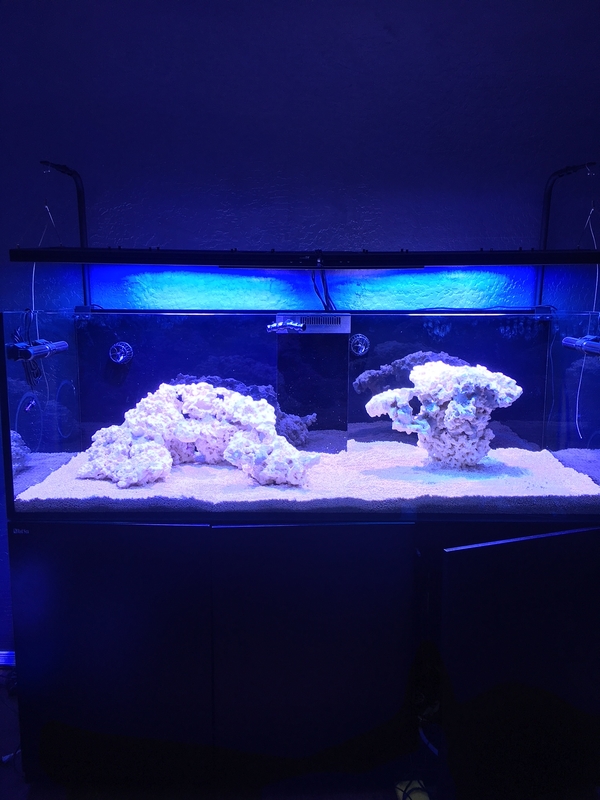 Overhead of the aquascape 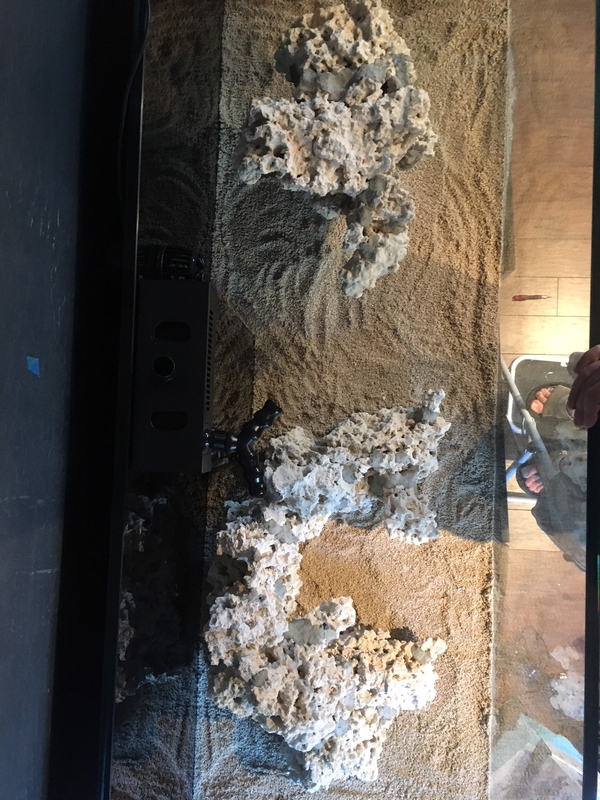 The right side bommie made from 4 Reef Saver Rocks and some rubble bonded by e-marco 400 with 3/4" acrylic rods stuck into a 1" thick cutting board for a stable base. It is rock solid - literally. 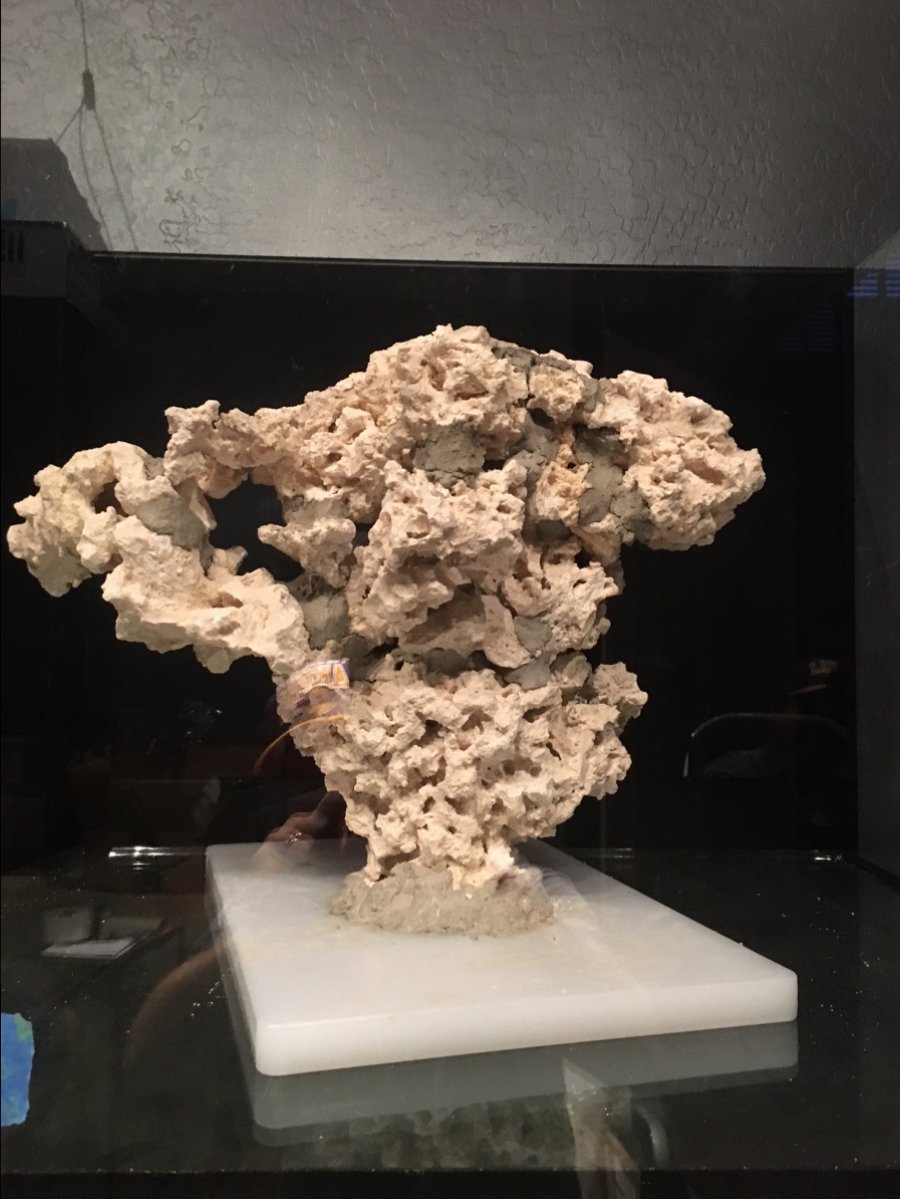 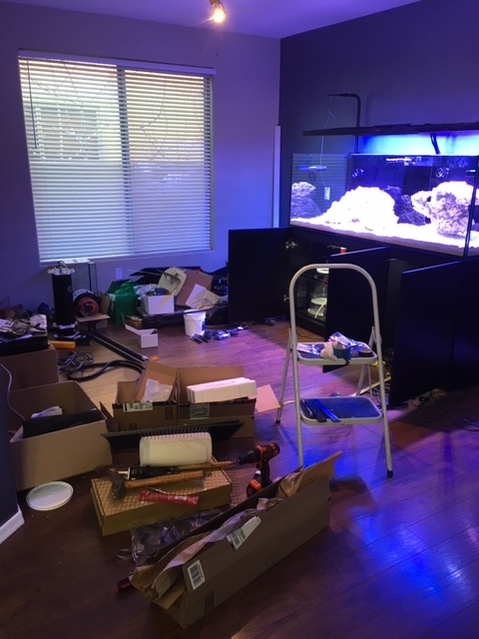 I will post equipment pics once I have everything in place and cleaned up... which basically has to happen this weekend as we have a new couch being deliverd for this room on Tuesday!

Unfortunately I needed a plumbing part that I had to order (being delivered today), so I didn't get water into it this past weekend. Going out of town this weekend, so no point in starting it up then leaving, so the plan is to get it going early next week. I'll be finishing up plumbing and setting up the QT this week. I'll get lots of new pictures up next week when it's all cleaned up and either filled or filling.

Here's my fish stocking list in the order of addition. Please let me know if anyone has any suggestions, or sees any issues. Most of these I've had before.

Any other additions that anyone can suggest?
OP

I even plugged some things in, and they worked. Good thing, because I've had the equipment for a while without a chance to test it!
OP

HAPPY BIRTHDAY!!! I added a bottle of Dr. Tim's One and Only today so I'm calling today the birthday for my tank. I got the return pump running, and a few other gadgets tested out, so I'm making progress. Lot's to do, but I'll post some new pics once I've cleaned up a bit.

I saw this tank in person, its ridiculous... one day

This is great I just ordered the Reefer XXL 625 today so I am following closely to get some tips!
OP

Lots of progress this week. Got my 73 gallon ATO resevoir from Custom Acrylics on Friday. 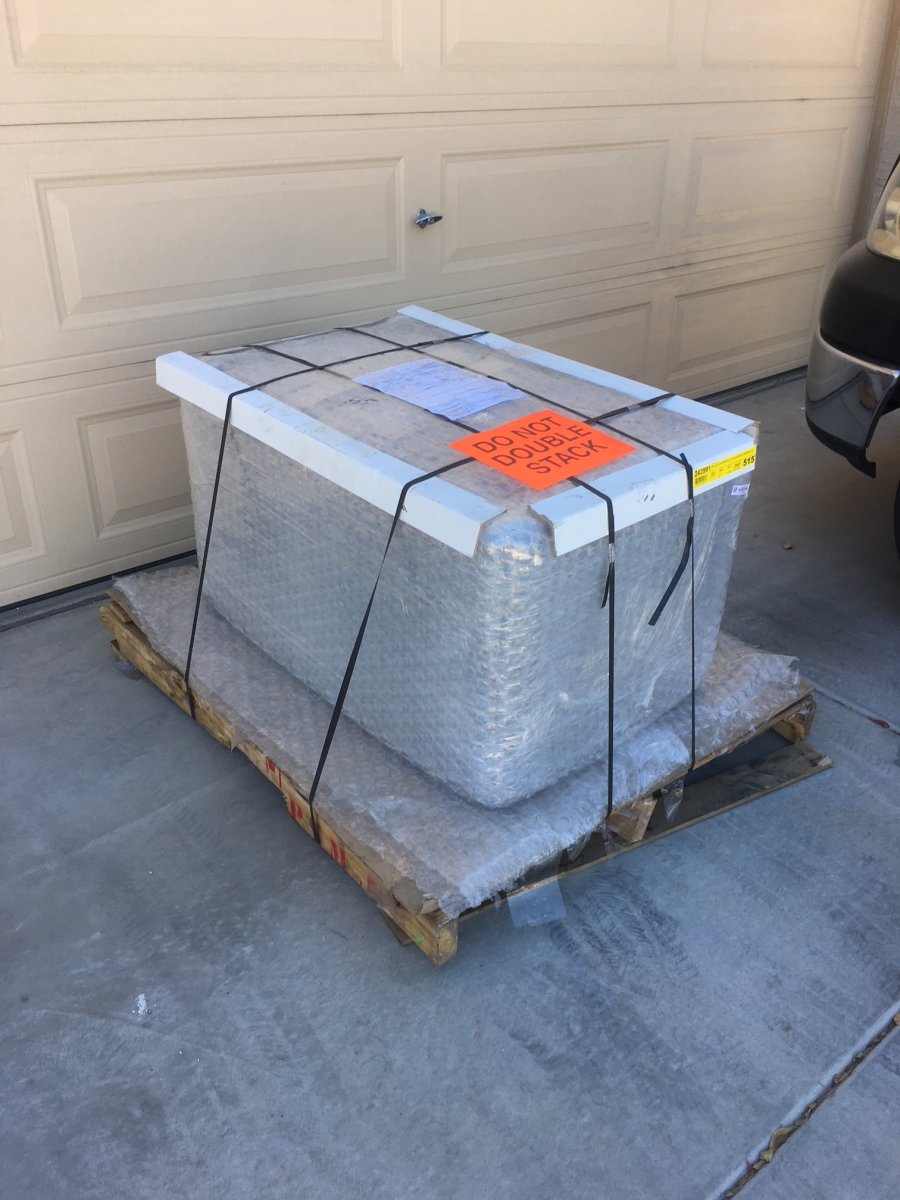 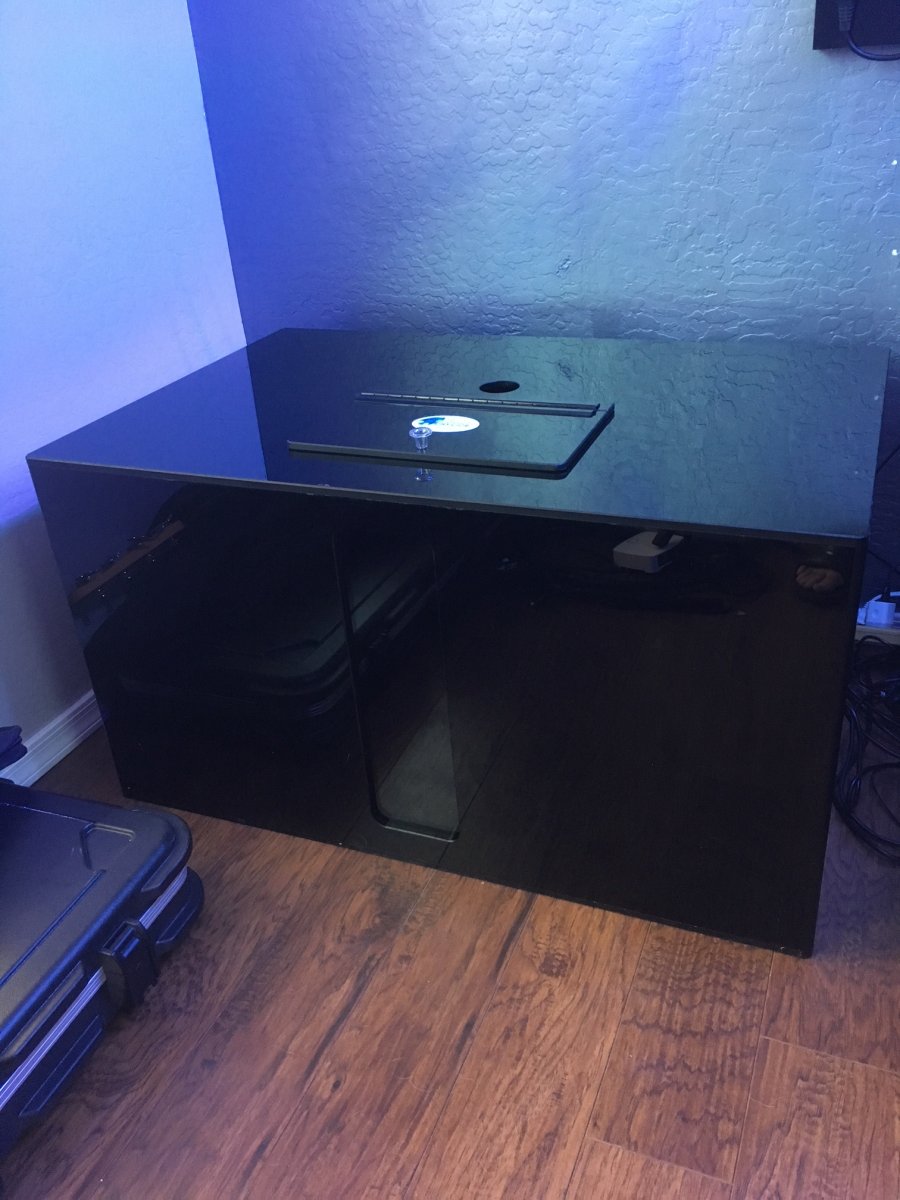 Also got most of my gadgets hooked up to the Apex and running. Still waiting on my fuge light - front left portion of the sump will have macro algae to supplement the algae reactor and help with pod production. 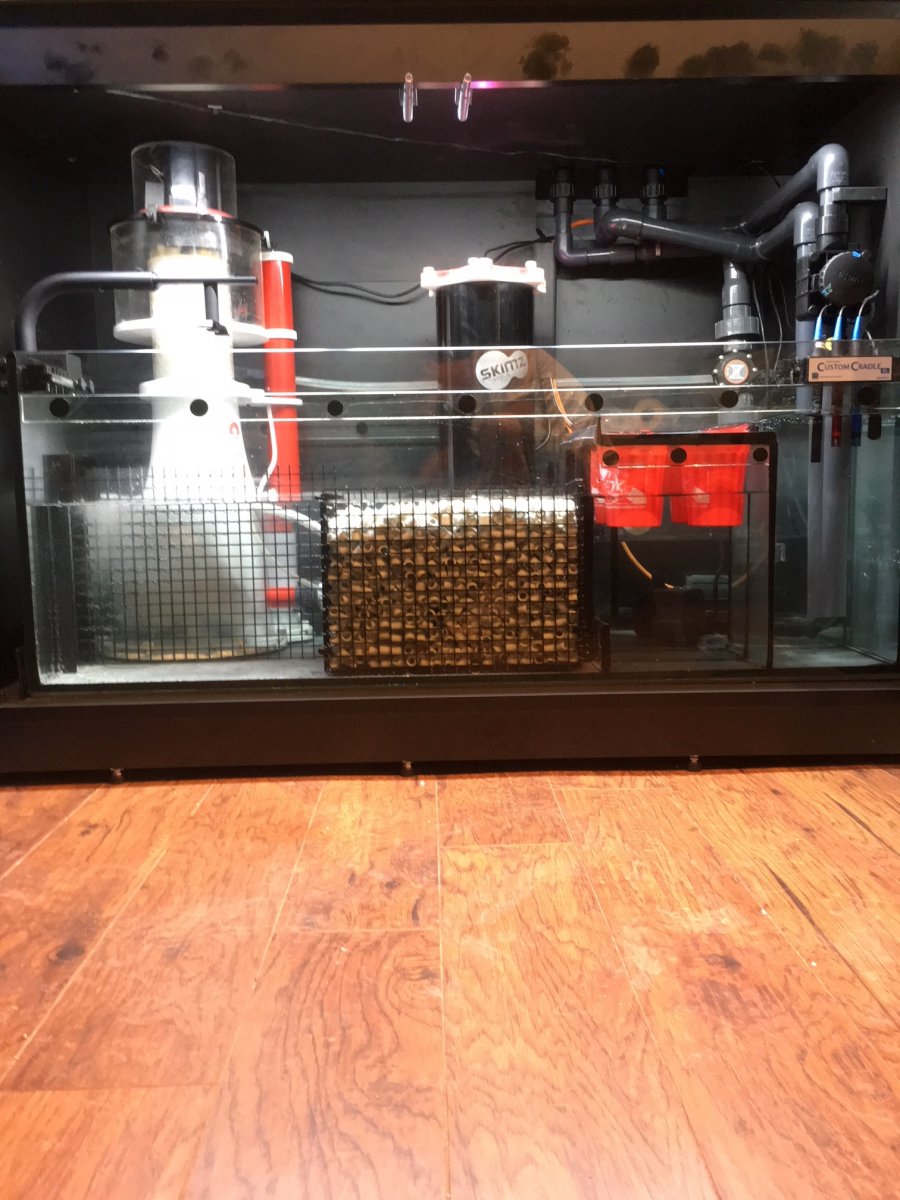 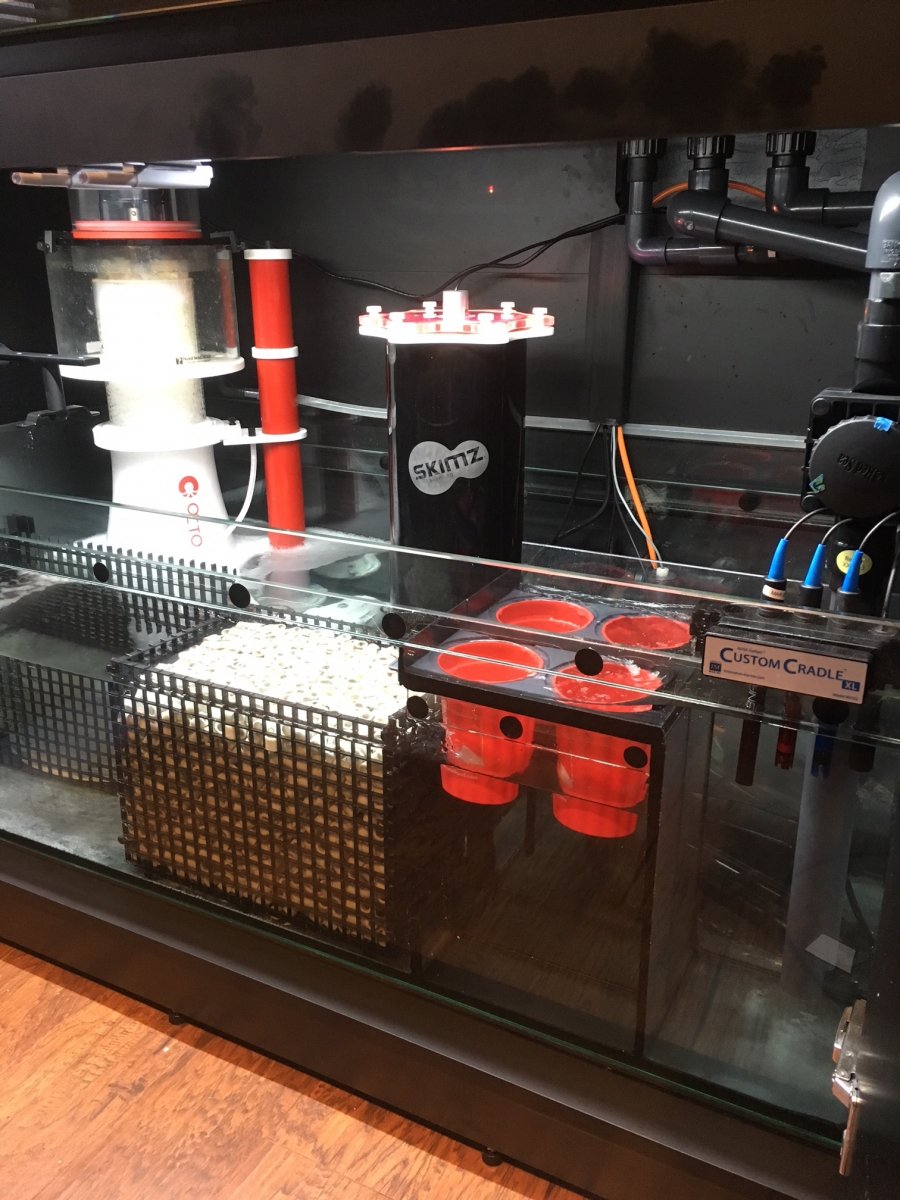 Also got my QT tank up and running and have some fishies coming in tomorrow to start their QT experience... More to come.
OP

Her'e a couple of shots of the tank waiting for guests to come out of QT... 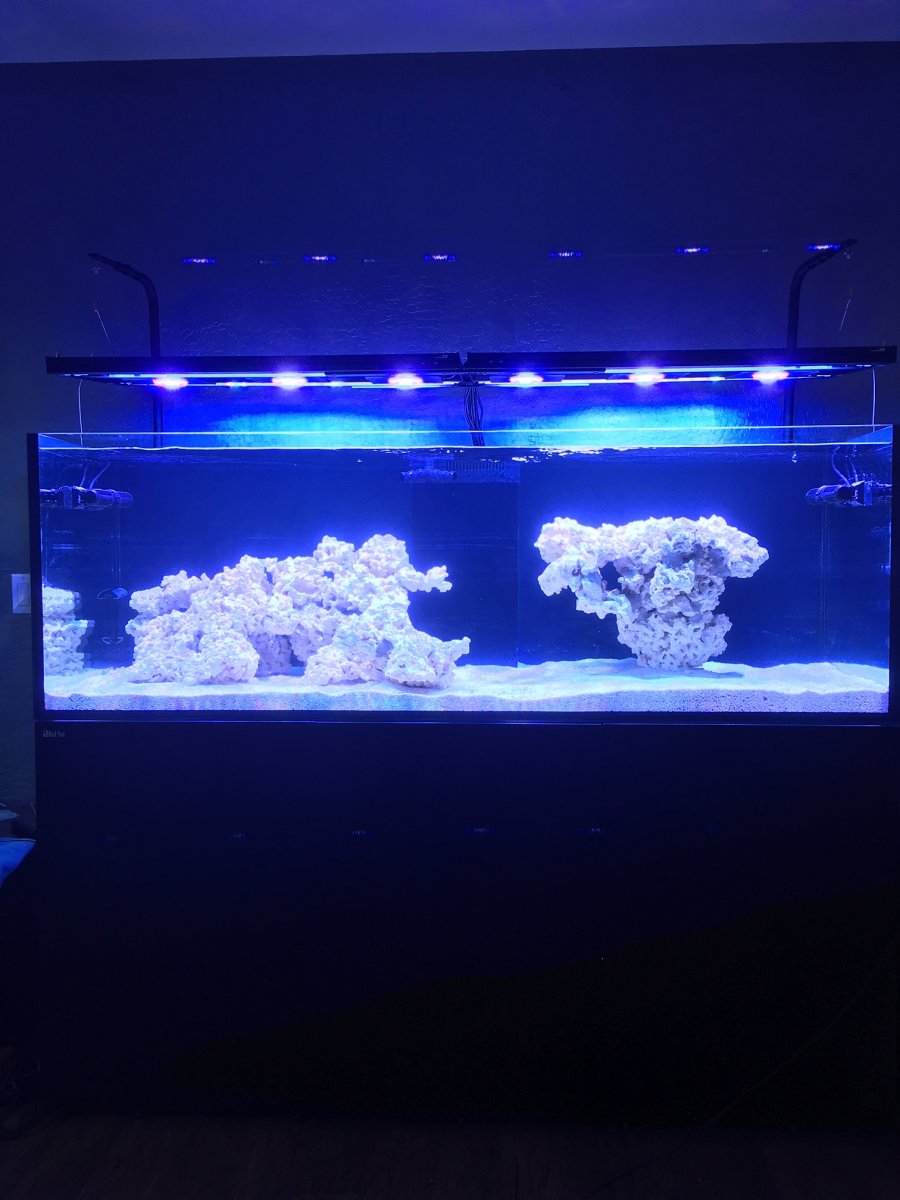 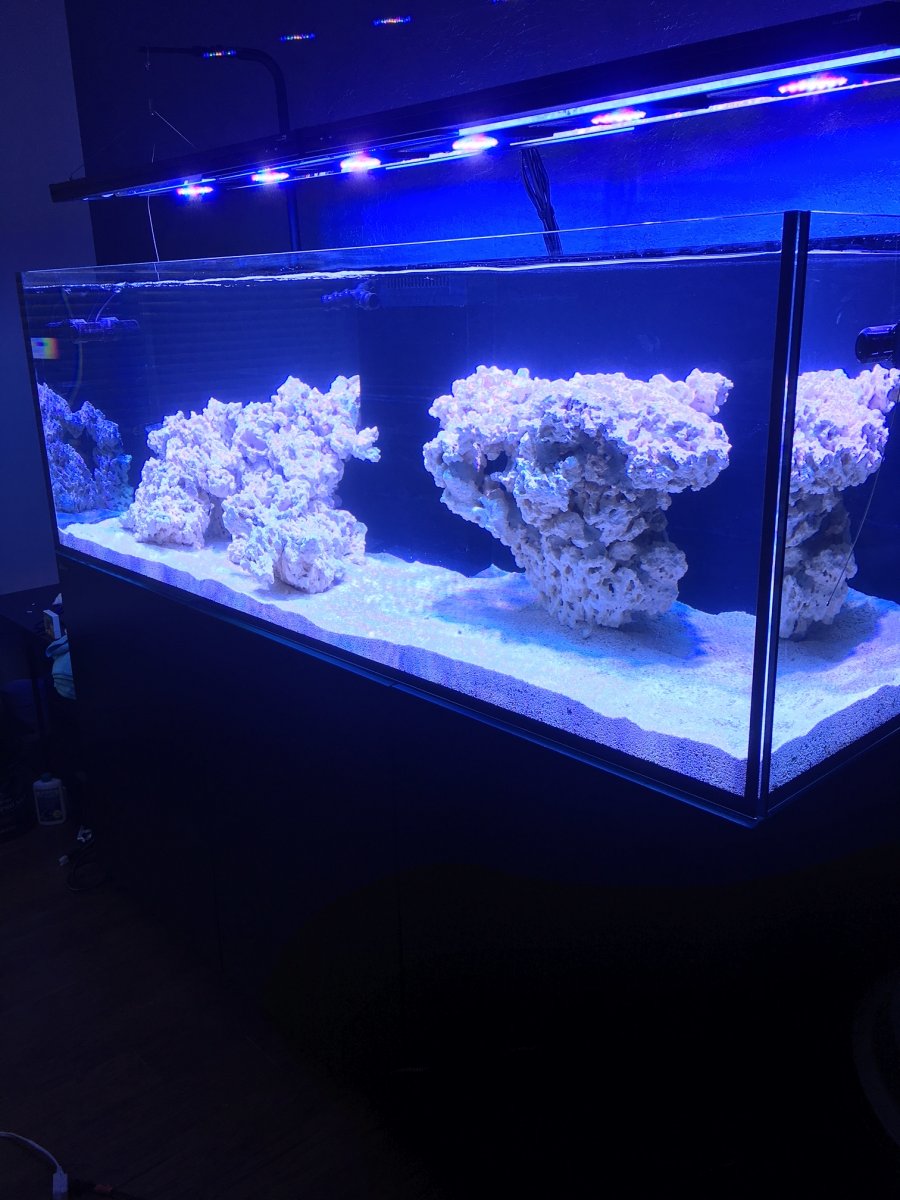 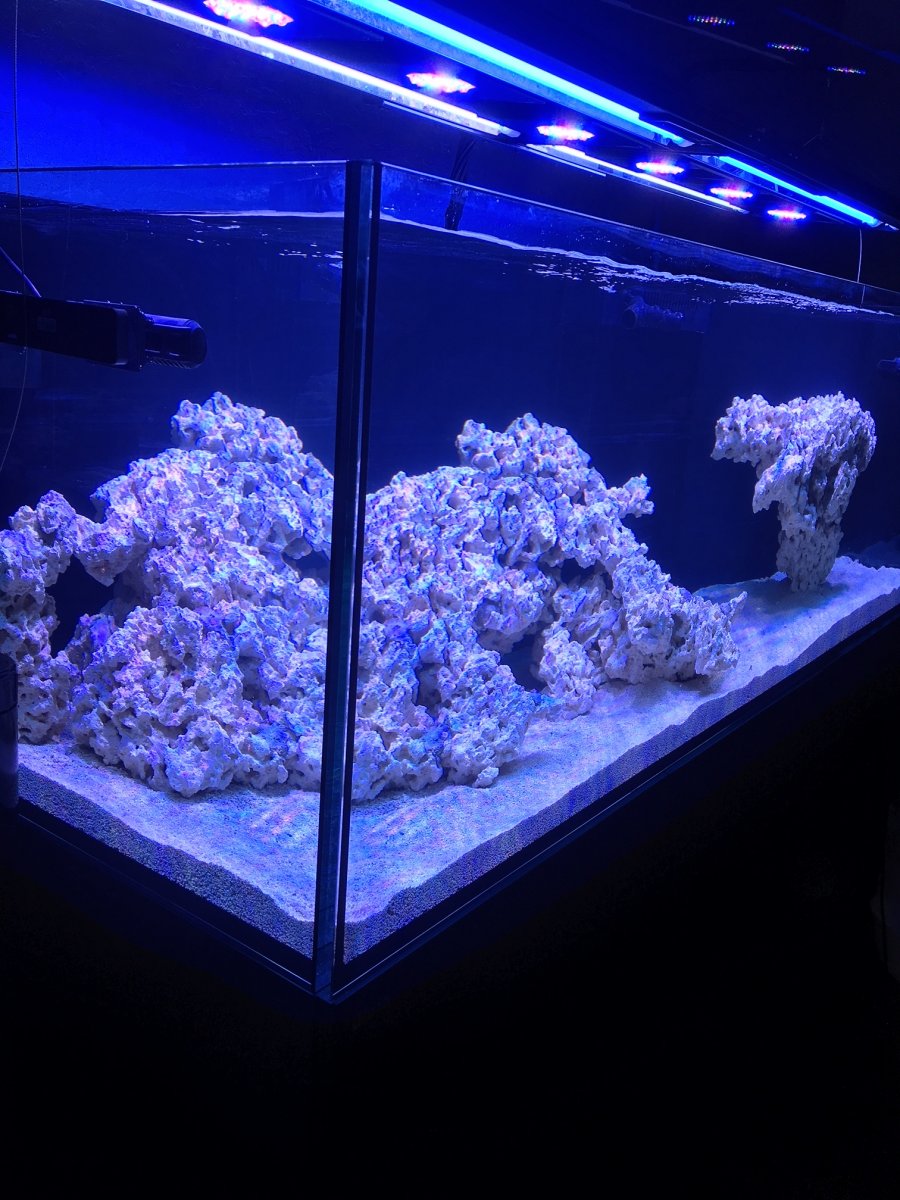 Not too much to report. DT is well into the cycle. I have also added lots of pods and some chaeto in the fuge.
Last edited: Apr 30, 2018
M

I am considering this tank. How is the overflow working for you? I had heard rumors of gurgling and the stock Red Sea valve being very difficult to deal with - especially when the pump is shut off and then restarted.

mckinney0171 said:
I am considering this tank. How is the overflow working for you? I had heard rumors of gurgling and the stock Red Sea valve being very difficult to deal with - especially when the pump is shut off and then restarted.
Click to expand...

Once you get it dialed in, it's fine, but a lot of people are replacing the valve with gate valves to make it easier to dial in. The Red Sea valve is touchy. My tank is silent, and I've been turning the pumps on and off often in order to install various items.
OP

It is a bit insane, but we like to travel and I don't want my tank sitter to have to worry about top off. This should last about 3-4 weeks. I do have to make sure I have redundant fail safes so that the whole thing doesn't empty into the sump at one time, but I'm confident I can manage that... knock on wood!