A few new additions Line-spot flasher wrasse and a pair of Nahackys in acclimation. 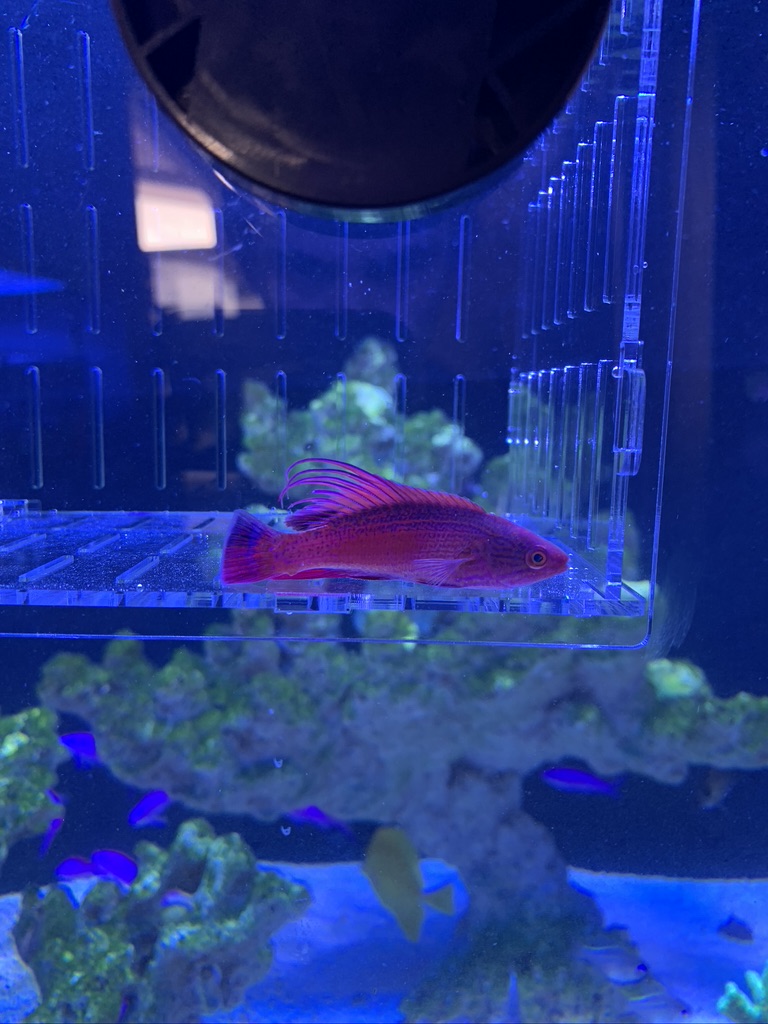 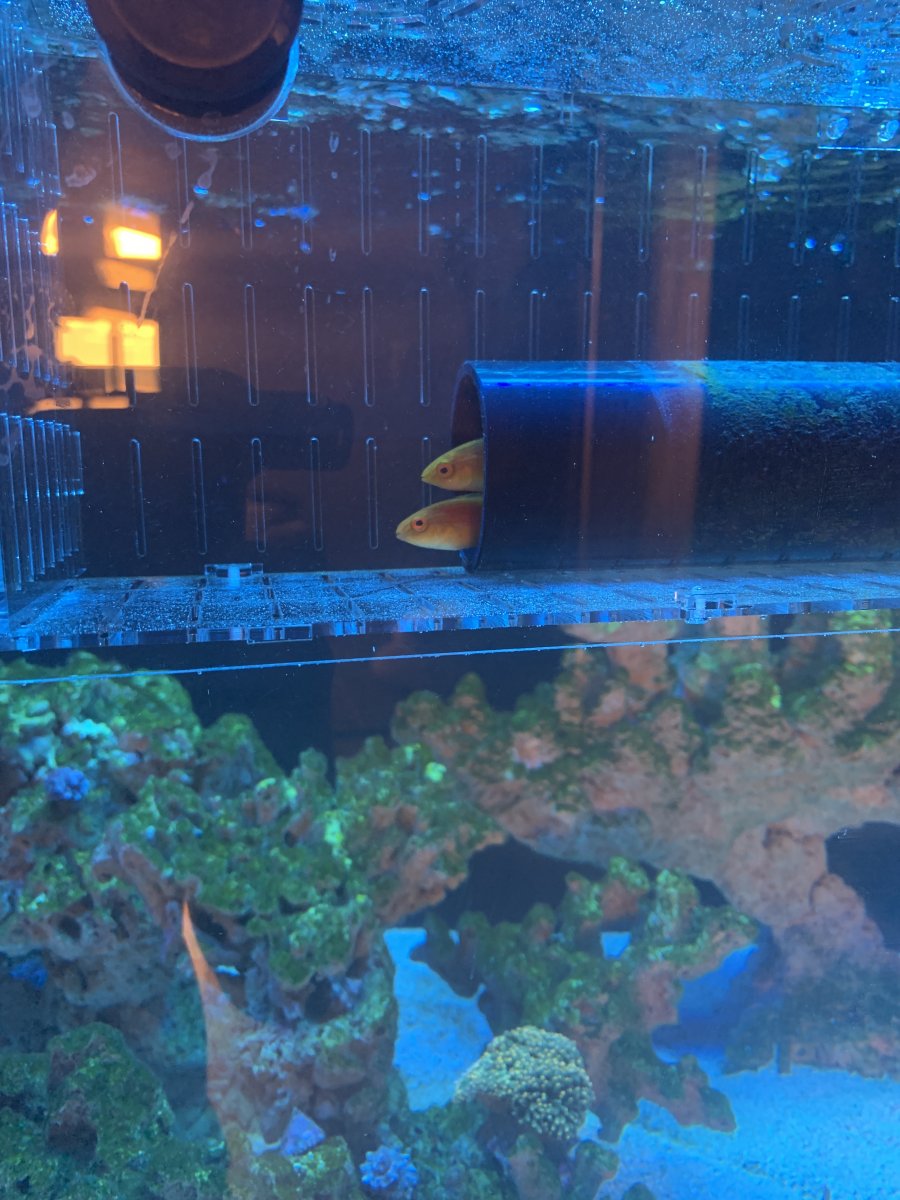 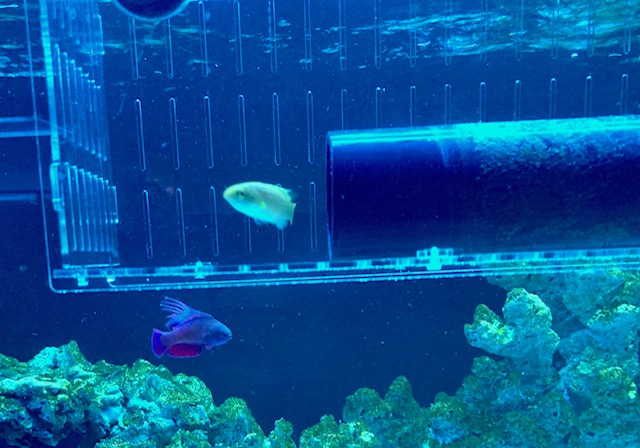 Since I'm adding wrasse, it was time to add a lid. I was contemplating one of the polycarbonate interlocking lids, but the lead time was about 3 months and wasn't ready to commit to the placement of the feeder. With the double eurobrace, there is a nice little inset that conceals the lid frame well. I picked up a couple 48" screen kits at home depot and clear mesh from BRS and built a three piece lid. The lid fits really well, isn't visible, and was much less expensive to make so likely not going to add a different lid in the near future. 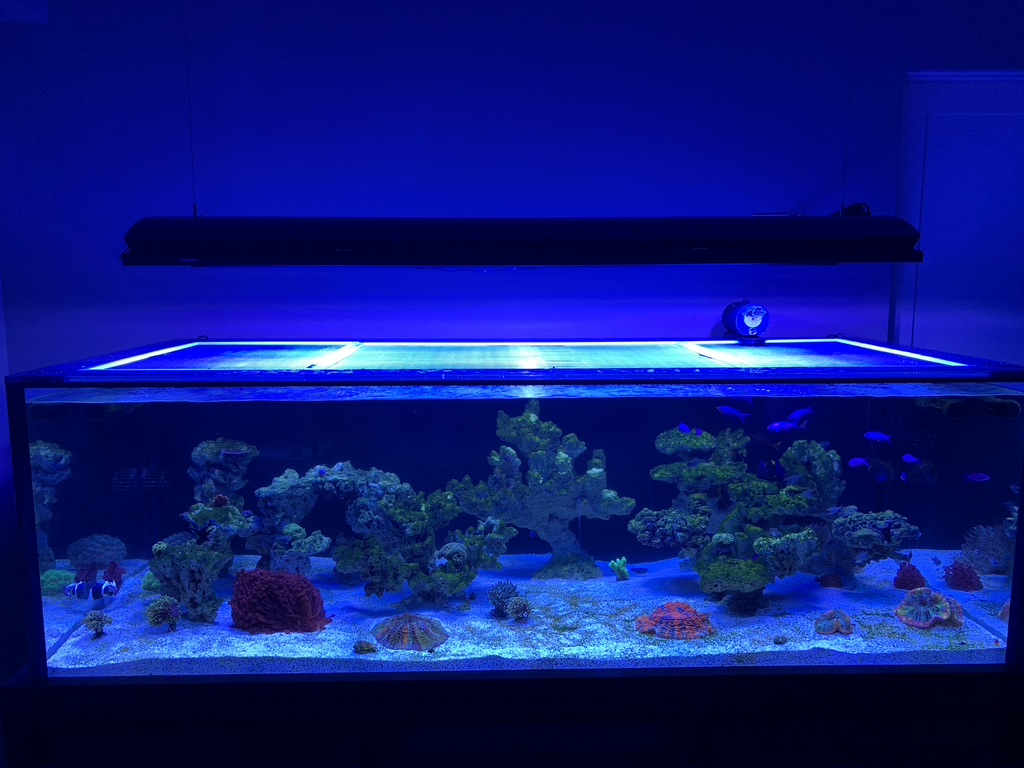 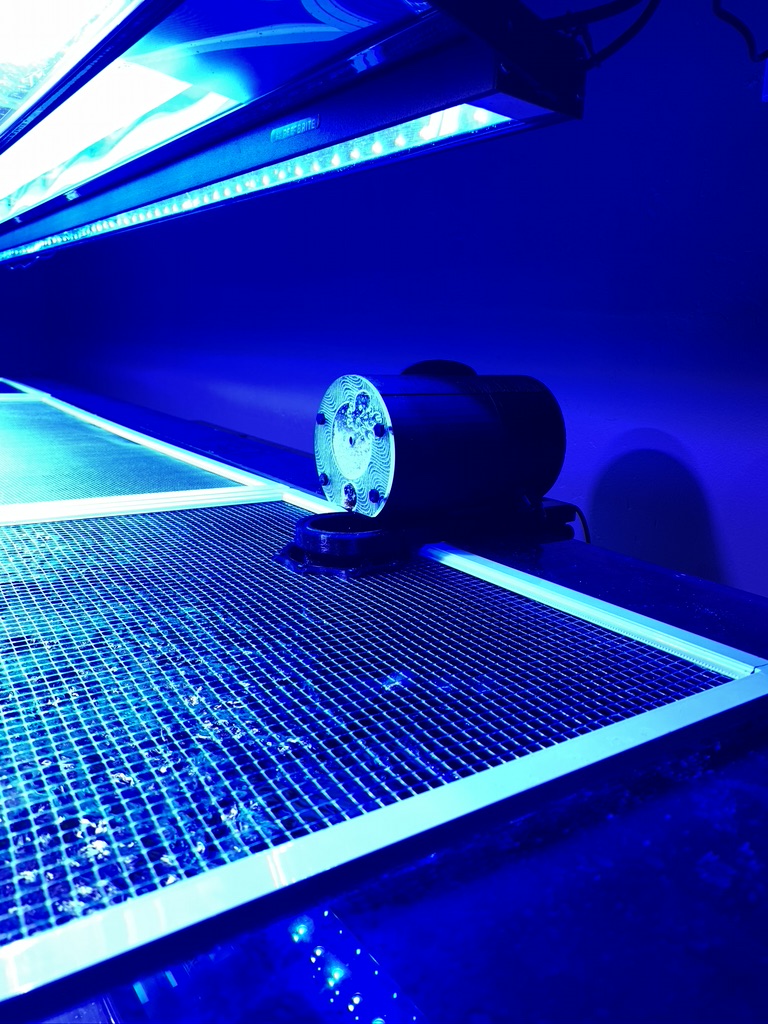 I started using the feeder on the old system. It's my first automatic feeder, and I find it works really well. The fish and corals both seemed to benefit from the more frequent smaller feedings on the old system. Currently I'm feeding the tank about 6 times/ day.

sdreef said:
Thanks! In terms of coral, will have mainly acropora up higher. I'm going to do my best to select location based on the form of the colony. I will have a mix of LPS on the sand. Eventually will transfer from my current system once I have a feel for the new set up and have stability.

Regarding fish, early on I'm planning on adding some Zebrasoma tangs and a group of threadfin cardinalfish with the hope of seeing a school of fish. Next up, will likely be a group of anthias and possibly some other more timid fish. From there I'll be transferring some of the fish from the other system. I would like to try Quoyi parrotfish, but I've seen success has been limited. I'm trying to the timing of when to add one early vs more mature tank that might give me the best chance of success. I love wrasses and will add once I've got a tight fitting lid. That's the current plan, but I'm still working on it. 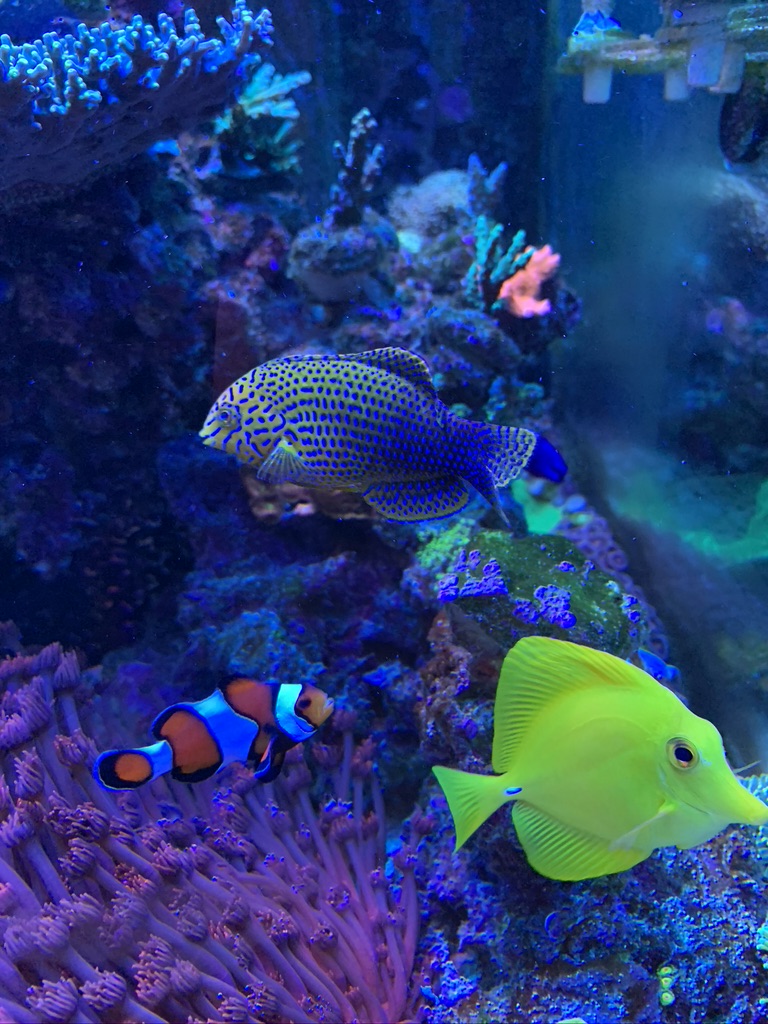 That wrasse is amazing! What kind is it?
OP

Thank you, he is a Potter's leopard wrasse. One my favorite fish.
OP

Added this male flame wrasse, and have Lineatus on the way. 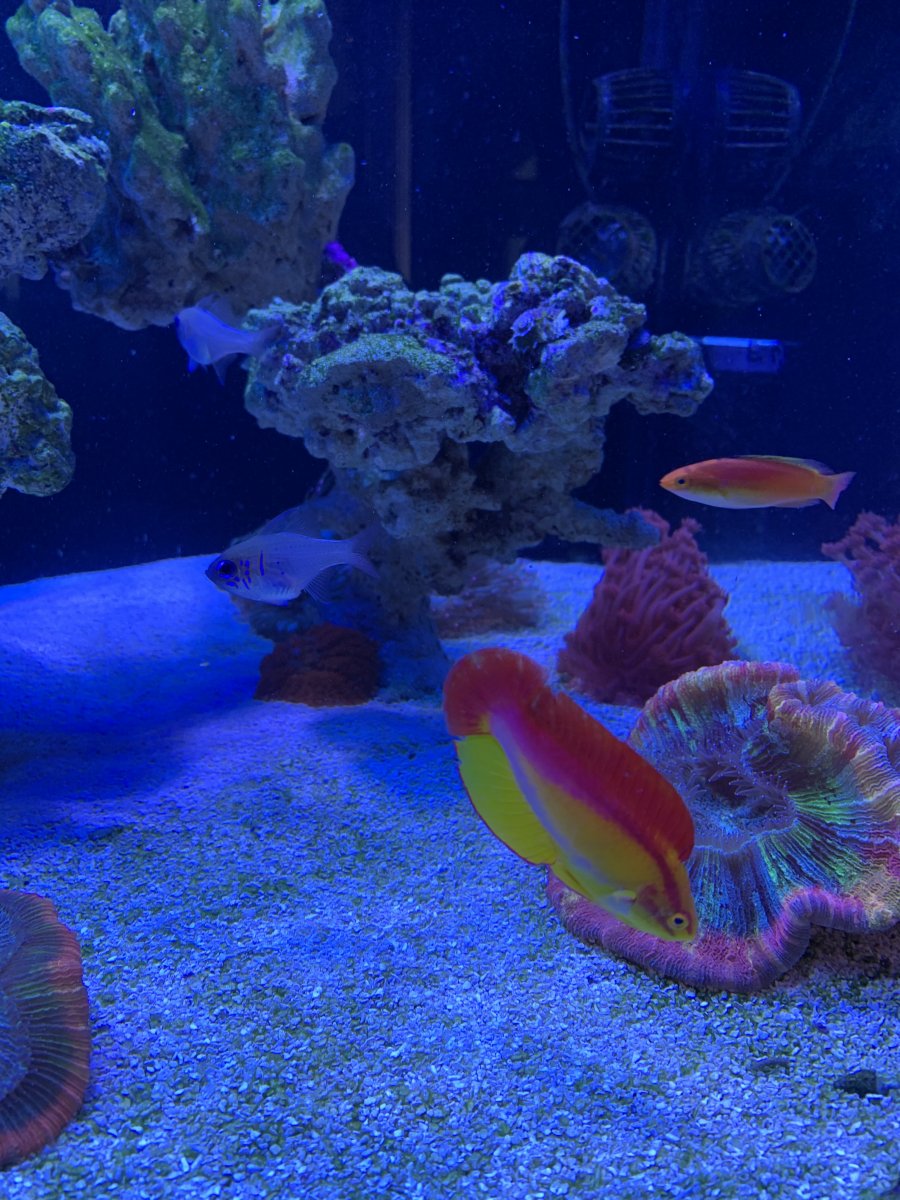 Excited to see coraline starting to dot the surfaces around the tank. Looking forward to adding some more sps soon. 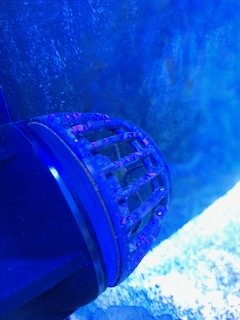 I'm working to adjust a couple parameters before I do that. The first is my flow. I was trying to keep powerheads to a minimum on the side panels, but I'm adjusting the plan. I just ordered a pair of MP60's that are going onto the sides.

I like the type of flow the red sea reefwaves are producing, but the two on either on either side of the tank are simply underpowered for a 7' tank The flow really dies out in the center of the tank. I had MP40s on the back panels, but they really don't bond very well . The glass is 3/4" and the paint on the back adds enough thickness to make the magnetic bond poor. The MP60's are coming this week, so I'll play around with the configuration of the pumps.

The second issue is my phosphates. I got busy and didn't check for a few weeks and now they are around .18 up from .04. I'm not sure why. My refugium macros seemed to be doing ok, but then gradually have died. I still have some chaeto that looks ok, so I'm hoping that this will grow out and help with the nutrients. My nitrates are 5-10 and all the other parameters look good.

I added a small amount of rowa phos in the reactor, increased the refugium's photoperiod, and performed a 10% water change over the past few days in order to gradually bring the phosphates down.
OP

Lineatus adjusting nicely and everyone is getting along well. 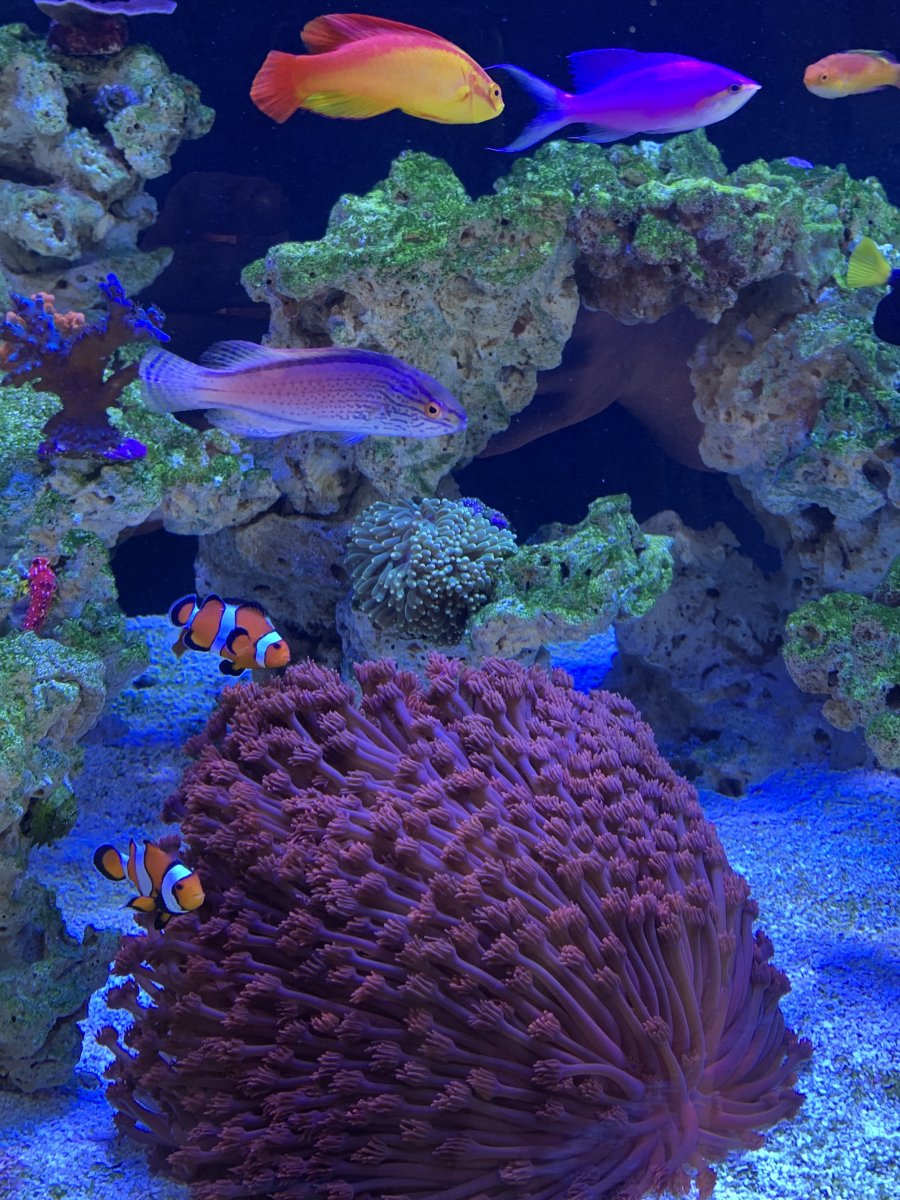 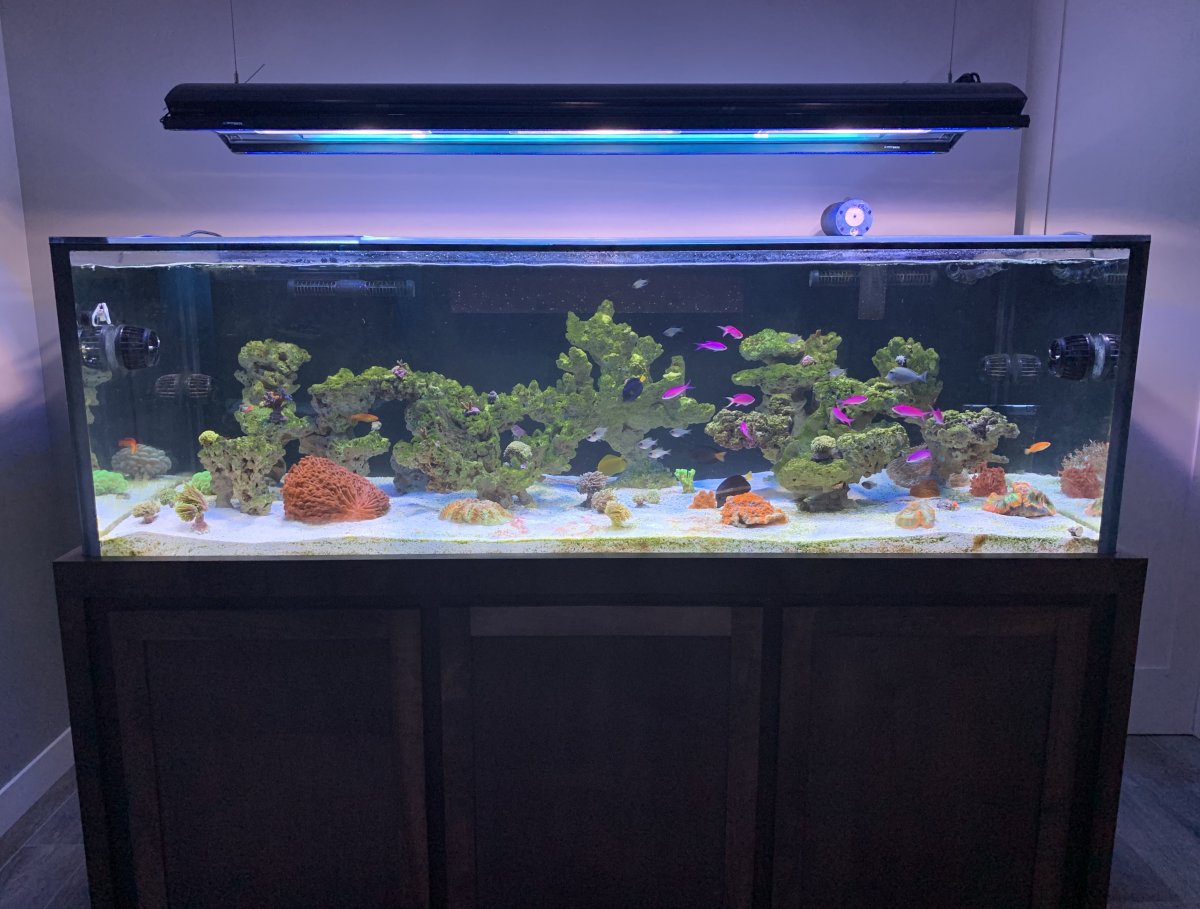 I adjusted the flow in the tank. I added a pair of MP60's to each end and moved my reef waves to the top back on either side of my overflow box. Still playing with the programs to vary the flow, but the water is moving well now. All of the pumps are running at a max of 50 -75% so I have room to dial up if the flow requirements change as the corals grow. 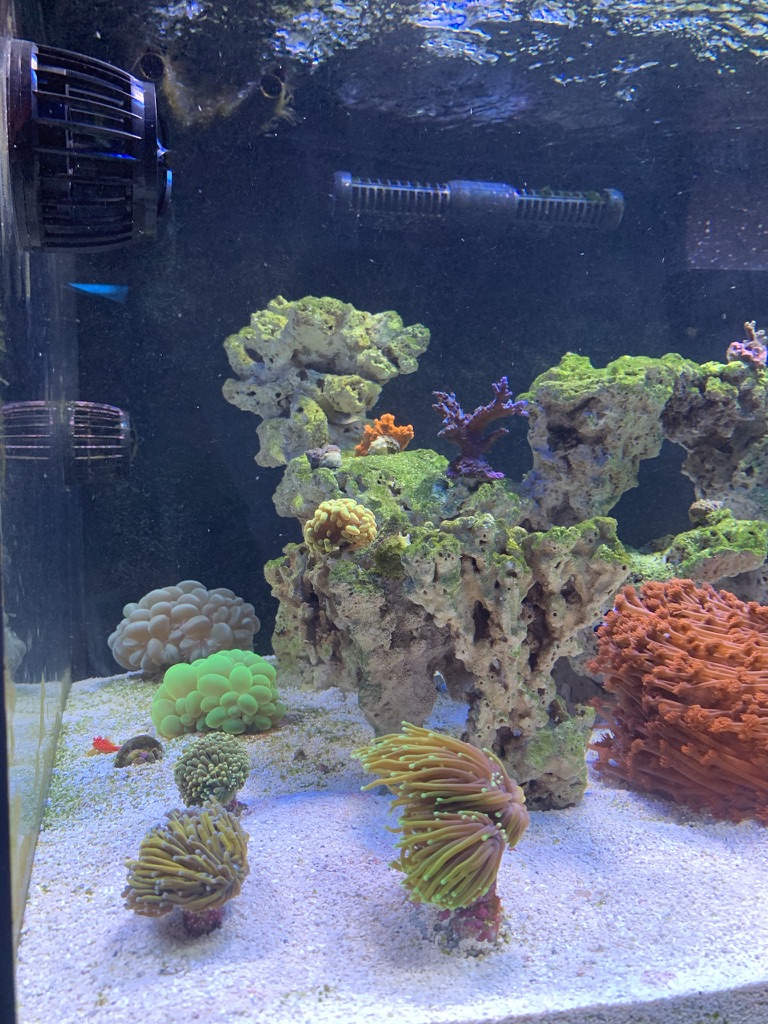 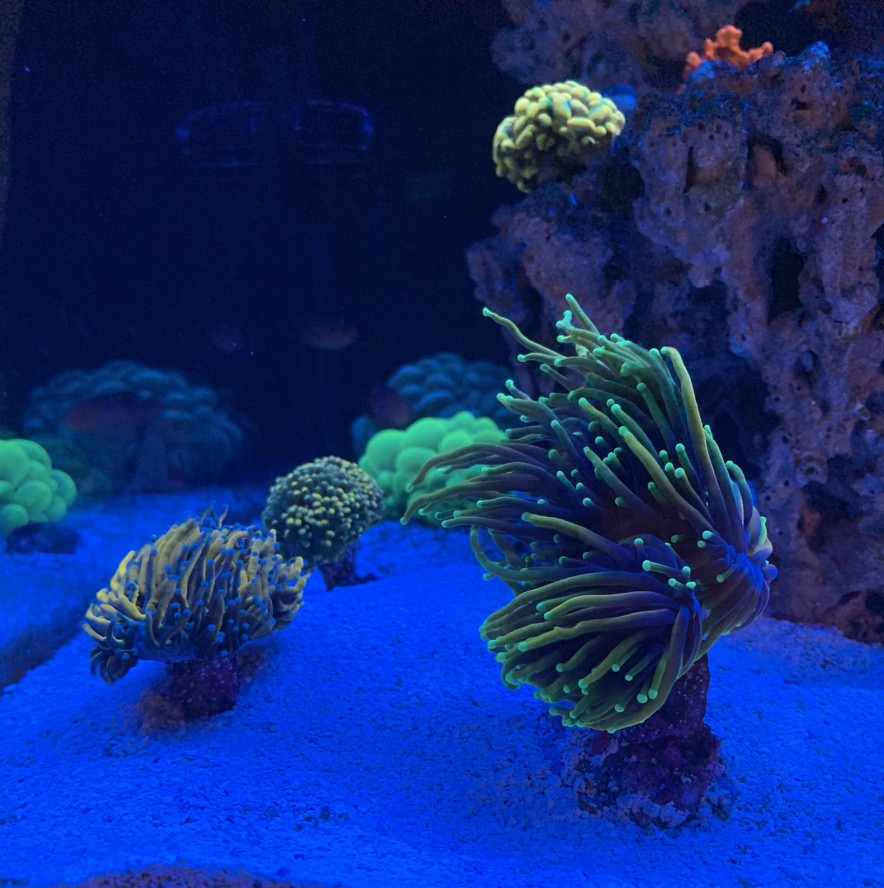 Added a blonde naso and a firefish. 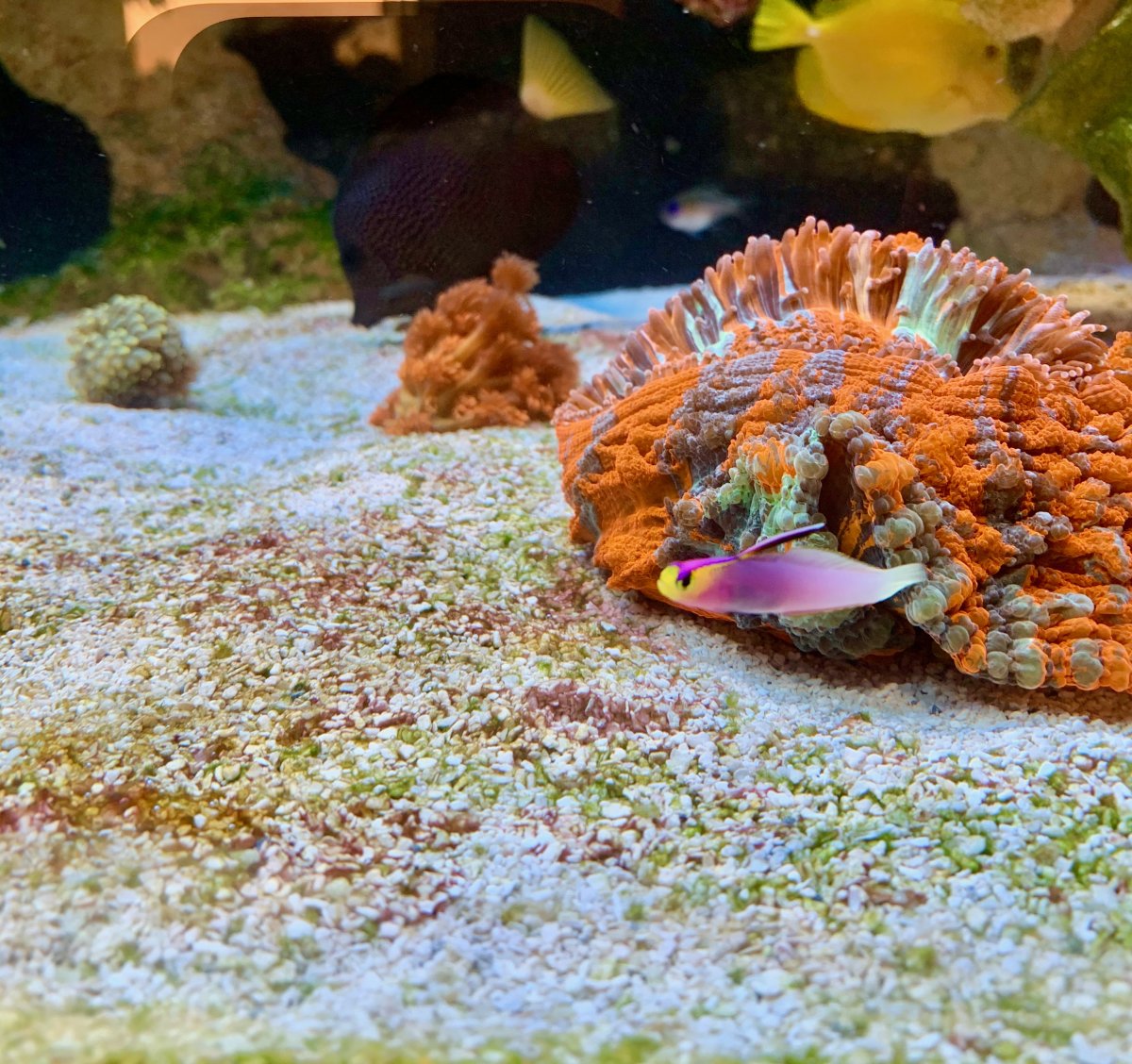 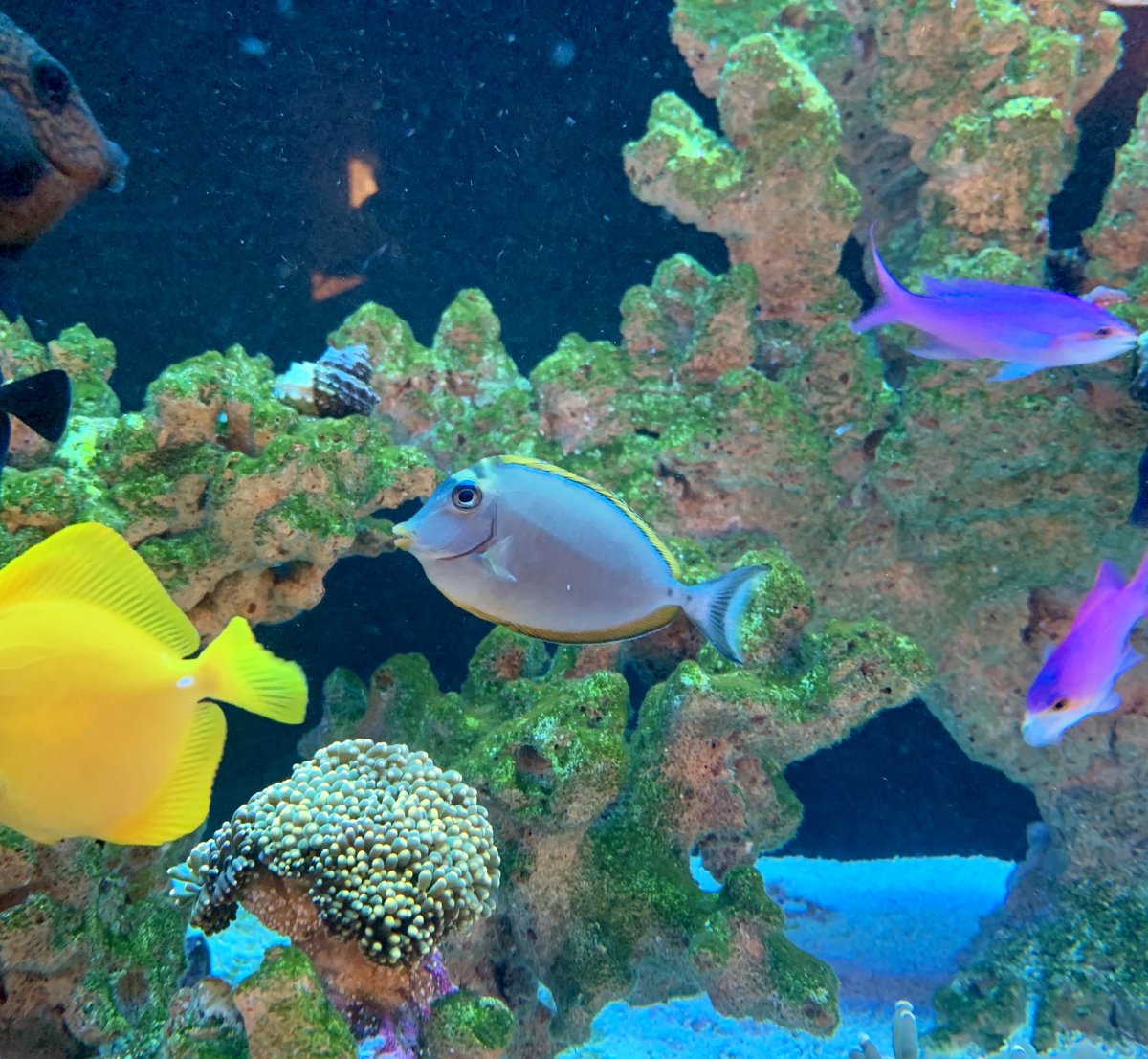 The coralline algae started growing at an appropriate time for the system, but I was concerned low pH may be slowing its growth. The pH was ranging 7.8-8.1. Hoping to speed up getting the system ready for more acropora, I added a CO2 scrubber to the skimmer. The scrubber has been on for about a week now and pH is in the range of 8-8.3. Trying to get the macro algae growing again in the refugium which will also hopefully help.

The only acropora frag in the system has been doing well with new growth and great polyp extension. So time to start transferring more tester frags. I transferred a millepora, granulosa, and a browned out previously bright yellow microclados from the other system. 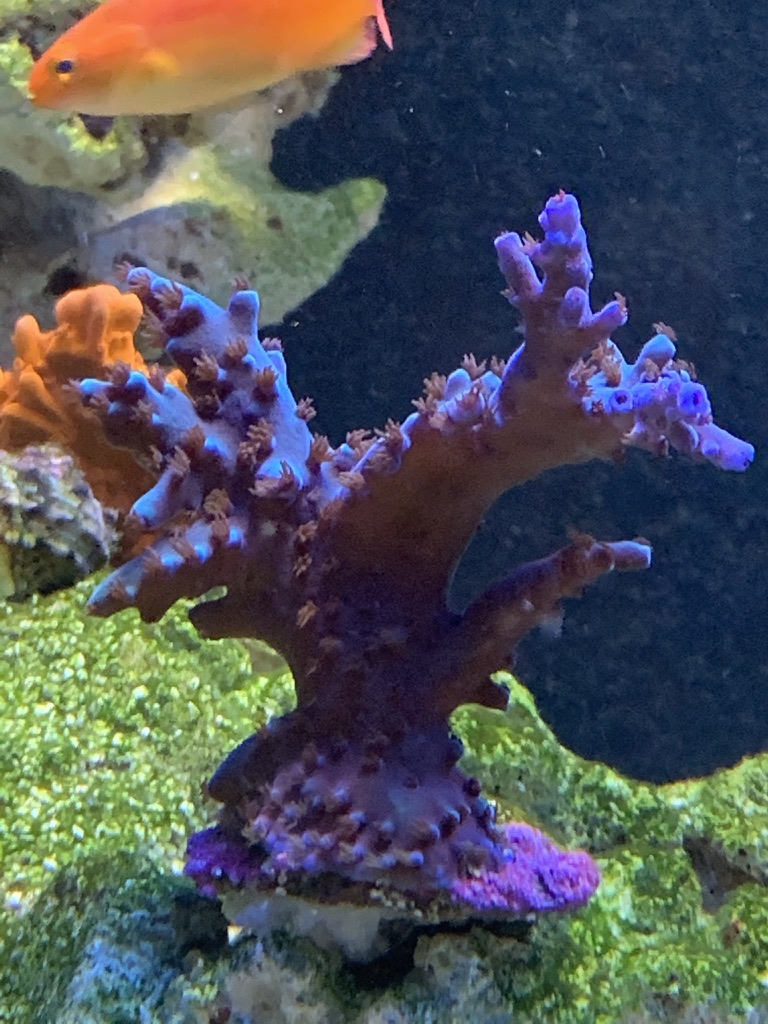 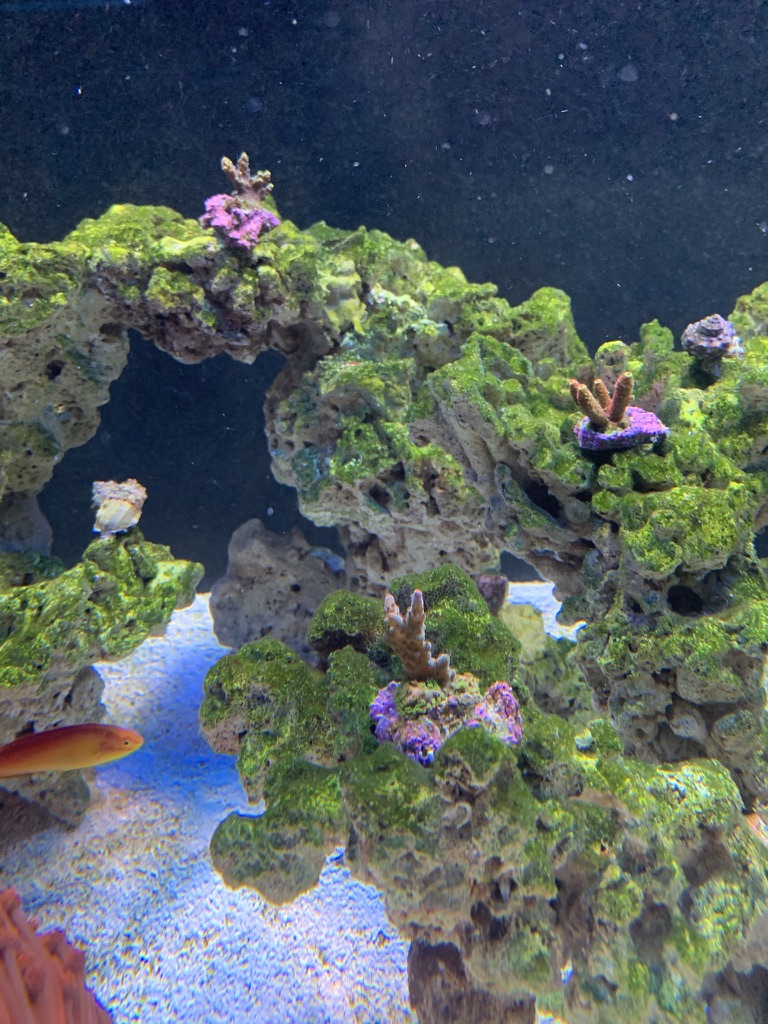 You have a really nice tank.

mattgsa said:
You have a really nice tank.
Click to expand...

I adjusted the flow in the tank. I added a pair of MP60's to each end and moved my reef waves to the top back on either side of my overflow box. Still playing with the programs to vary the flow, but the water is moving well now. All of the pumps are running at a max of 50 -75% so I have room to dial up if the flow requirements change as the corals grow.

Those purple anthias are amazing! Are they doing well with the plank? I have a plank too and we are debating what kind of anthias to go with.
OP

kenchilada said:
Those purple anthias are amazing! Are they doing well with the plank? I have a plank too and we are debating what kind of anthias to go with.
Click to expand...

Thank you. I would say it's early to know exactly how well it's going, but I'll share my experience so far. 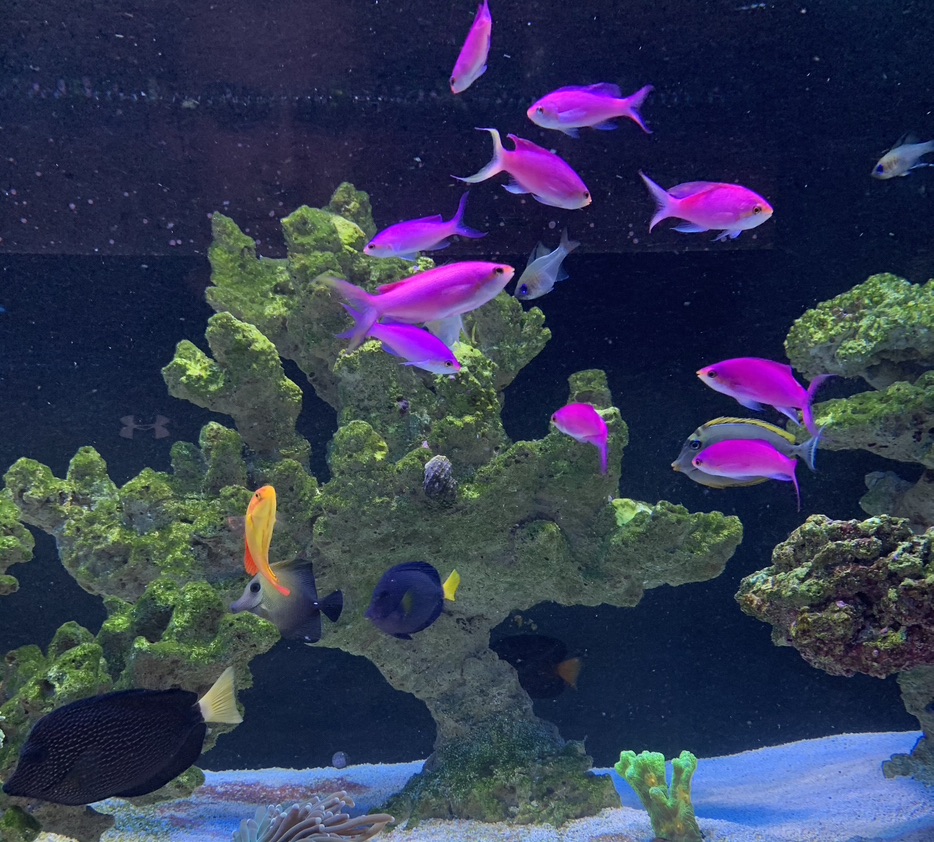 They've been in the system for about two months now and I deliberately added them to the system early. There was gem and purple tang and a group of threadfin cardinals when I added them to the tank. I started with 14. Two didn't make it past 24 hours. Two lasted a month, but were extremely finicky eaters and gradually got skinny and died. The remaining 10 seem to be doing well currently, but it's only been a short time.

Here is a write up regarding purple queen anthias care that was helpful.

Regarding feeding, I was feeding live baby brine shrimp routinely early on. Currently they are eating frozen food and freeze-dried foods via the plank. One thing I've been doing with my plank is simply dropping some frozen cubes in the mixing chamber to melt the food and feed when the pump goes on. The anthias take frozen mysis, regular brine, capelin eggs, and calanus currently. Here's a video of them eating ocean plankton a little larger than regular mysis.


Here's a video of them eating freeze dried mysis and calanus.


The remaining 10 anthias seem to be doing ok at this point. Based on the appearance of the females lacking the yellow dorsal stripe, I believe these are Pseudanthias pascalus.

A few have transitioned into being male and there is clearly a dominant male that is larger than the rest. They have been peaceful with each other and the other tank mates.

I'm using the plank to currently feed 6 times a day and feed frozen 2-3 times in addition to that most days. I'm pretty sure that's why my phosphates are high and a contributing factor to the ongoing green rocks, but I'm just managing it for now.

My experience with these fish so far has been better than expected based on everything I've read in terms of feeding and specifically the size of the food they are accepting. The real goal is long term survival, and given it has only been two months, it's too early to say.
Last edited: Feb 9, 2021
OP

One of the Nahacky's wrasse is transitioning into a male. He is getting red effusions in his caudal fin and red, yellow, and black in his dorsal fin. Fun to see. 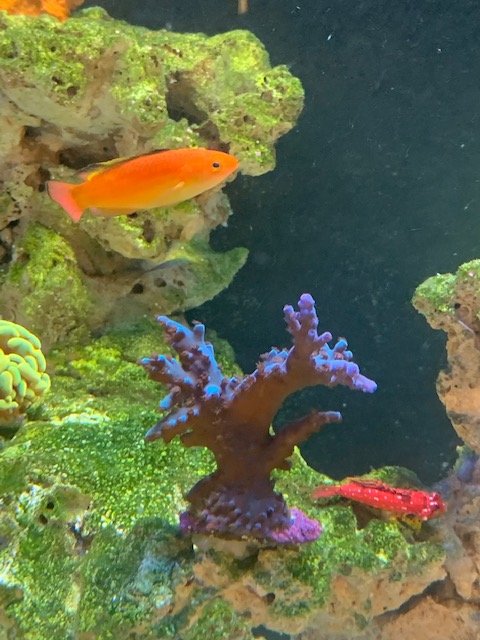 The line spot spent the past couple weeks hiding in the top corner of the tank. No one was picking on him, but was just very timid. He's finally adjusted now, and is swimming around freely throughout the tank. 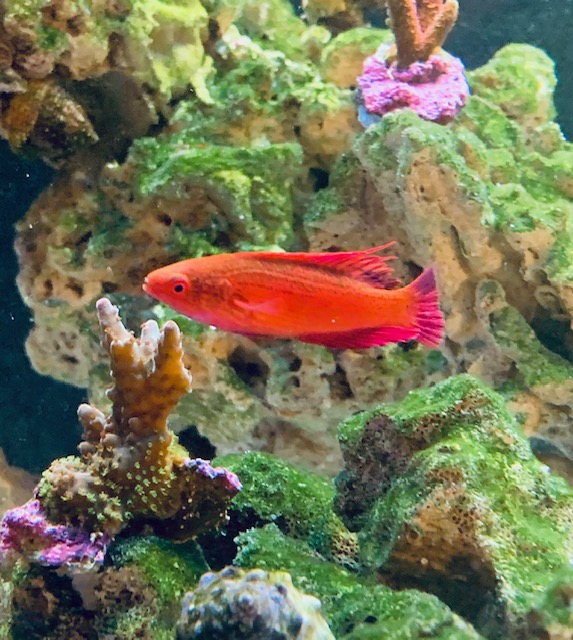 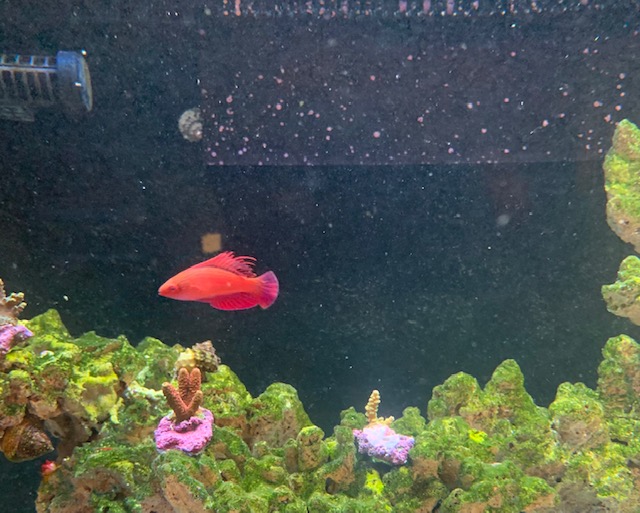 The pair of helfriechi firefish were hiding a lot for the first week, but now spend most of the time out in the open. They've decided to live under the acantho. They hover and flicker in the flow. 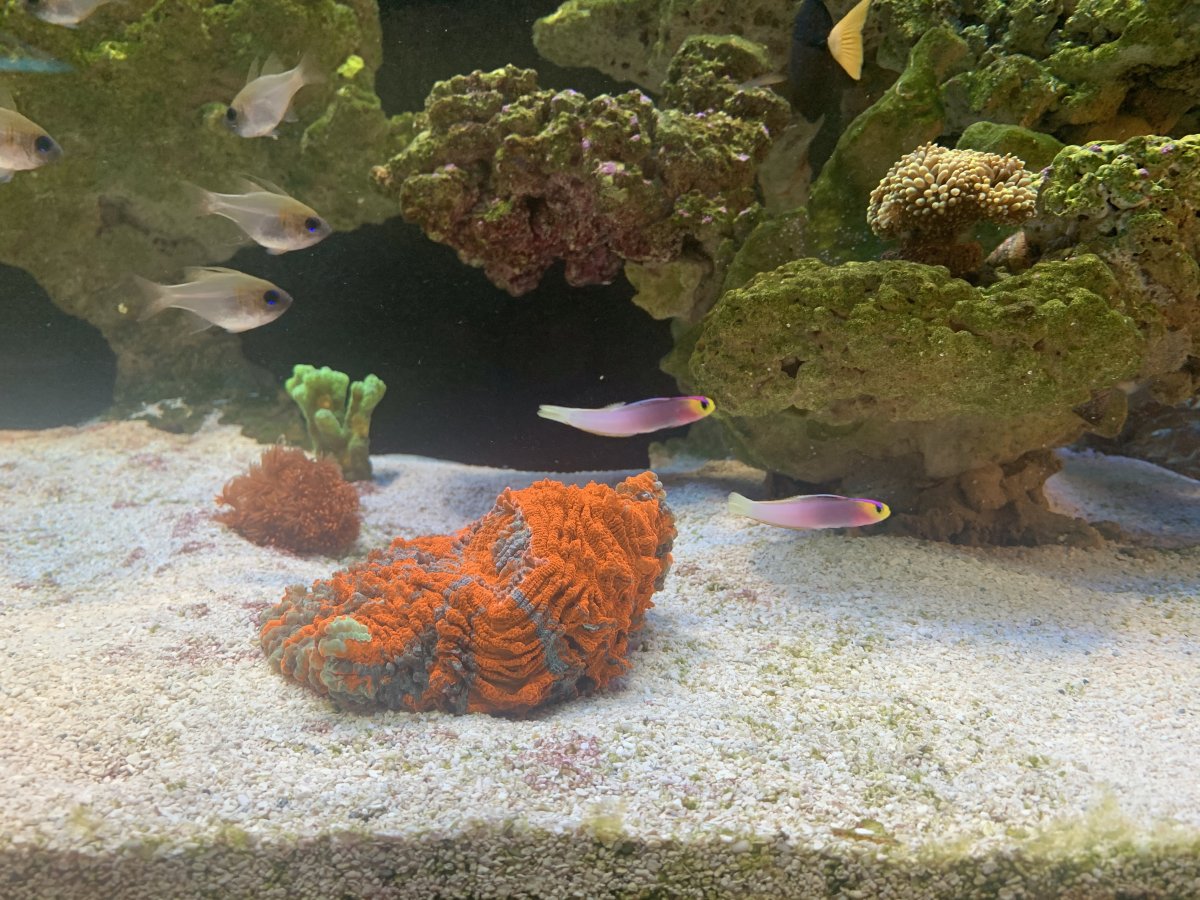 The system is progressing. Water went into the system 11/16, so approaching the 3 month mark. I rebooted the refugium with red ogo. Phosphates are down to 0.1. Nitrates are 5-10. All the corals and fish appear to be doing well currently. 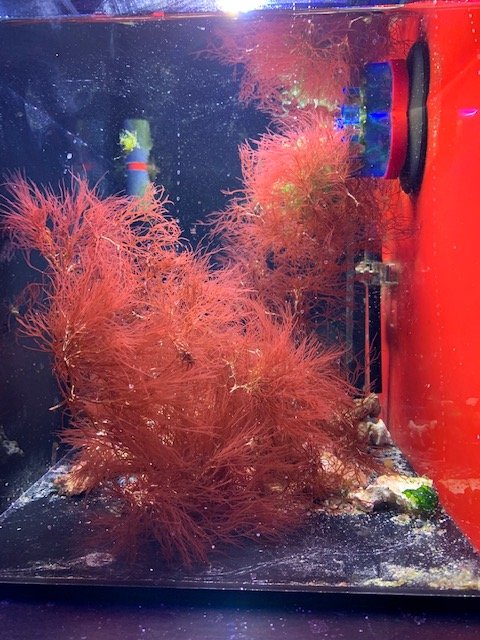 I readjusted the skimmer slightly after adding the CO2 scrubber, and it is skimming effectively. This is 24 hours of skimmate. Currently pH is running 8.0-8.3. I expect this to go up as I increase the daily amount of photosynthesis in the system when I add more coral. 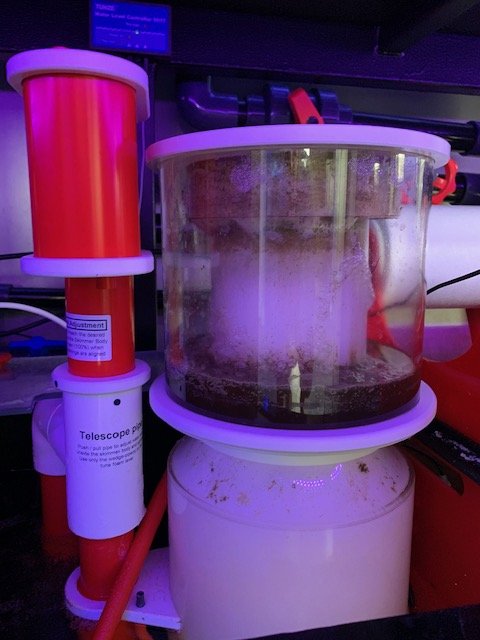 The filter rollers are working well for me. I still have not changed the rolls. Since I have a dual roller, it does appear that the first roll of fleece is advancing a little more frequently. The rolls are on a timer through the apex and I readjusted the programming for the first roll to come on less frequently than the second roll. Once I replace the fleece will see how evenly the rolls advance and how long they last. I'm happy to have no filter socks to change or maintain and still use mechanical filtration. Given the frequency of freeze-dried and particulate foods that I am feeding the anthias, I find the mechanical filtration helpful in maintaining the water. 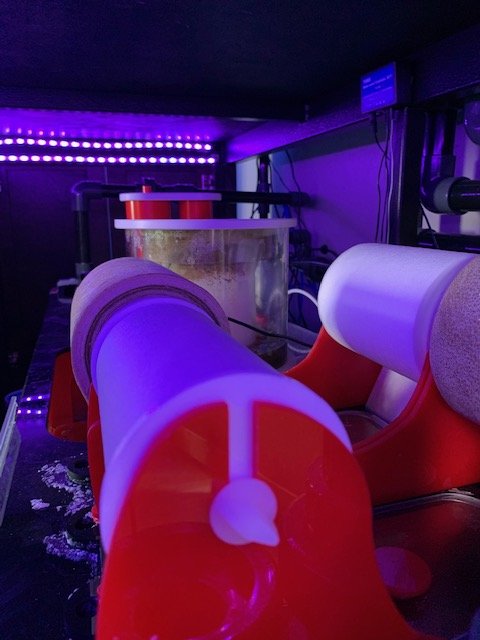 The Coraline is growing quickly now. CO2 scrubber was added to the skimmer 1/29. Last time I post progression shots of my powerhead 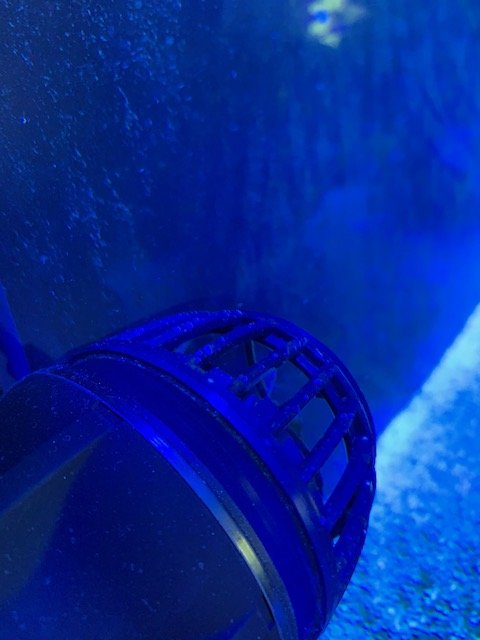 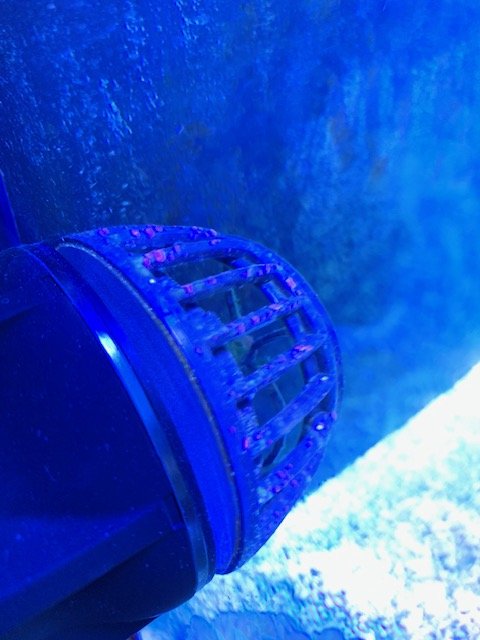 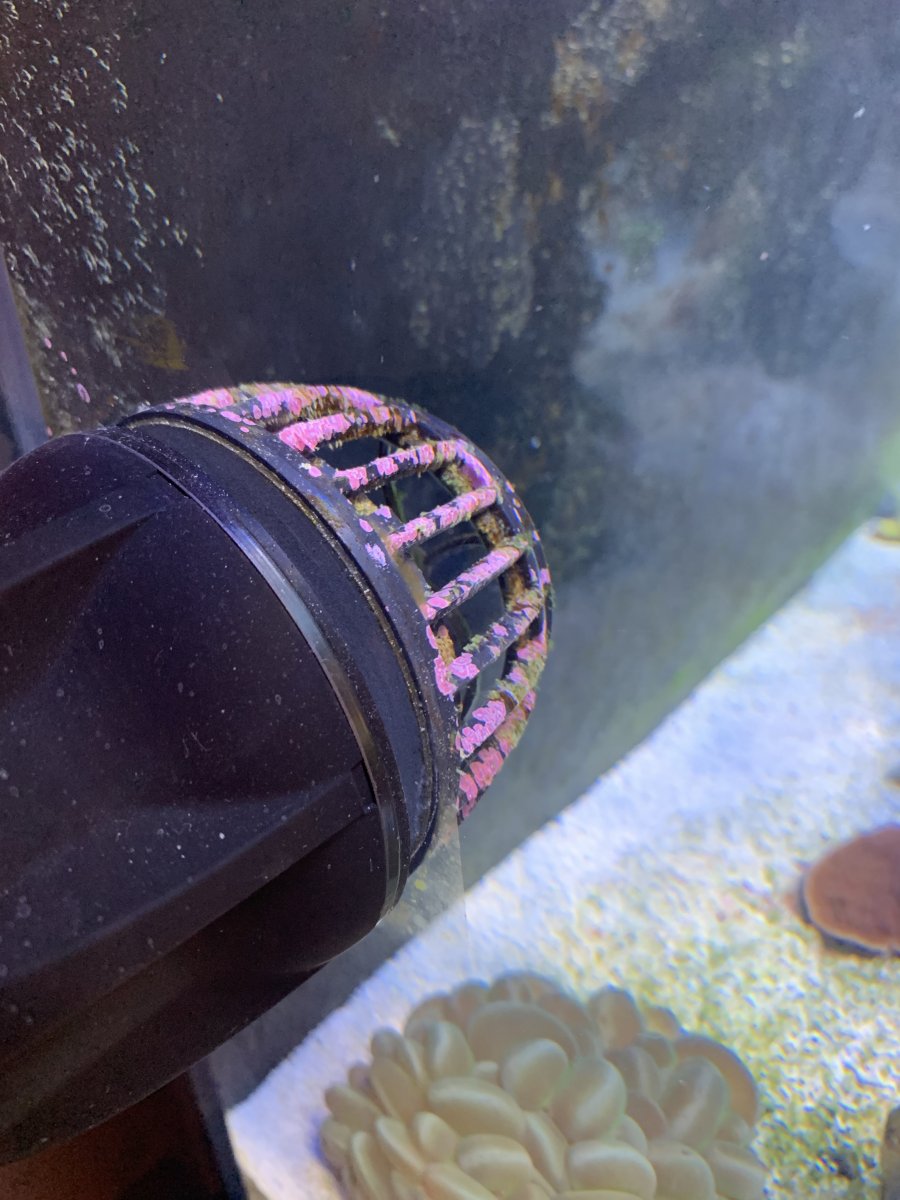 Water chemistry has been stable with the exception of the phosphates

All of the frags that I have transferred over are doing well, so it's time now to start adding more frags that have been under quarantine in the other system.
Last edited: Feb 14, 2021