Happy Saturday Bud,
I finally got some time to set up my ats. From the photos attached, do you think that the drain pipe is at the right level? Thanks

Yup that is perfect! You can put the filter bag over the coupling and tighten down so it “hangs” on the thumbscrews, that will trap the bubbles
OP

Sweet! And the journey begins!
OP

Will the bubbles subside after awhile?
OP

One more thing, I bought the scrubber for my new 120 but due to house renovations I won't be able to set it up for a few months. I set the scrubber up on my 55 dt with 30 gallon sump. I am having some algae in the dt and am hoping that it can help. Is my 55 too small for the scrubber or should I just run the lights on a low setting?

fishybizzness said:
Will the bubbles subside after awhile?
Click to expand...


fishybizzness said:
Is my 55 too small for the scrubber or should I just run the lights on a low setting?
Click to expand...

Just start it up as normal (lights on 50% for 9-12 hours/day) and leave it there, you might be able to bump up the intensity a few steps along the way, as well as adding a few hours/day (depending on the growth you get) but by the time your main tank is set up, it should be pretty well cured up.


Just start it up as normal (lights on 50% for 9-12 hours/day) and leave it there, you might be able to bump up the intensity a few steps along the way, as well as adding a few hours/day (depending on the growth you get) but by the time your main tank is set up, it should be pretty well cured up.

So I've been running the scrubber for a few months now and the growth is ok. It's usually some strands of bright green but mostly a darker brown. It hasn't really gotten overly thick like I've seen in your videos and I'm wondering what I'm doing wrong. My light intensity is a little over halfway and the flow seems to cover the entire screen. I'm also still having to scrub hair algae off the rocks in the dt every week to week 1/2. It's not as bad as it was but still not great. Any advice?

I don't know that you're doing any "wrong" per se - you can't necessarily force the growth to happen the way you want it, you can however usually tune the scrubber according to the conditions of the system.

I have found that text description of growth does not always match how I would describe your growth. So this is best to do with pics. The best way to take pics is by turning water off, lifting out the screen, and taking either a flash pic, or shining a flashlight on the screen so that it is under full white light. Take a couple from different angles and distances and pick the one that turns out the best.

Going back to where you started, is this still a temp setup or is your tank set up now?

#1: New tanks have generally lower biodiversity. As the system matures, the scrubber will also mature and you will tend to get more diverse growth. I'm starting to see this pattern more with brand new systems (even seeded with mature live rock).

#2: I had my fixtures bench tested on a high-end spectrometer and as it turns out, with the knob at the halfway point (6 o'clock), that is 25% intensity. That is still the recommended starting point, because this level matches the full-power output of most off-the-shelf growth lights. Turning the knob 1/4 turn upward (to 3/4 of max) gets you to 50% (doubling the intensity). Another 1/4 turn doubles it again to 100%. Starting at halfway and working up slowly to the 3/4 point is still the recommendation. BUT: if you are getting decent or at least consistent growth at any particular intensity, you can max out the photoperiod at that intensity and generally not have to worry about the scrubber growth reducing - because photosaturation has to do with intensity, not duration. If you happen to suck out the last bit of nutrients (or the last bit of a limiting nutrient) while running a long photoperiod, that's a different case (not photosaturation).

Before you do anything, give a quick synopsis of your system (age, bioload, feeding, etc)
OP

The system is the 55 gallon I told you about. I've been doing renovations on my house for the last few months and haven't set up my 120 yet. Probably going to wait until after hurricane season to do it. The 55 has been setup for 2.5 years with live rock and ocean live sand. I cleaned the scrubber earlier so I'll have to wait until next weekend to get a pic. I'm going to try turning the light intensity up a little and see what happens. The lights go on at 6 pm and off at 6 am for a 12 hour period. Do you think it would be wise to add more time or just add light intensity?
OP

Btw, thanks for taking the time to give advice as always Bud!! I appreciate it

When in doubt, add hours first. If you've got an L2 on a 55g, I would worry about the intensity causing nutrient stripping, which can lead to the growth stalling out. I'd add hours. Keep the intensity the same and go to 18 hrs/day and give it a few cycles.

It also helps to take a pic with each harvest. I have gotten into the forced habit of taking one flash pic with my phone of each side of the screen at every harvest. 1) so that I can remember when I have to harvest next and 2) so I can refer back to growth if I have an odd result. I've gotten so busy that I went over 40 days without harvesting once...I would not recommend that.
OP

Afternoon Bud,
This is a week 1/2 growth since I upped my light period from 12 hrs to about q6 hrs. It actually looks about the same as the 12 hr period. Should I just wait a few more cycles and see if the growth improves or is this pretty good growth for an average tank? 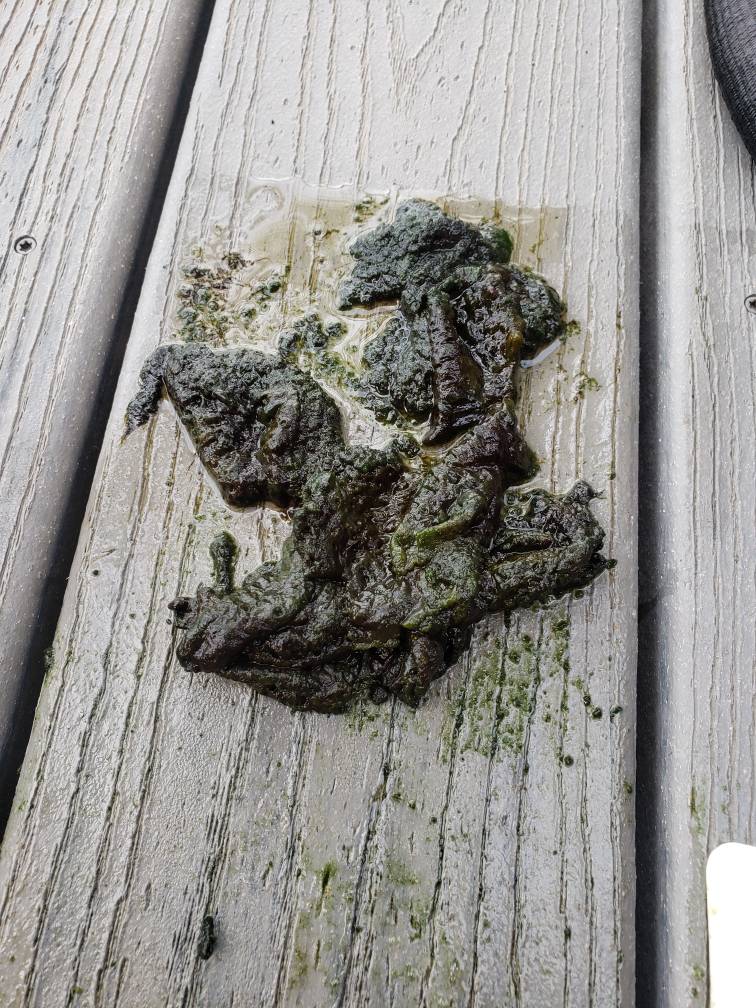 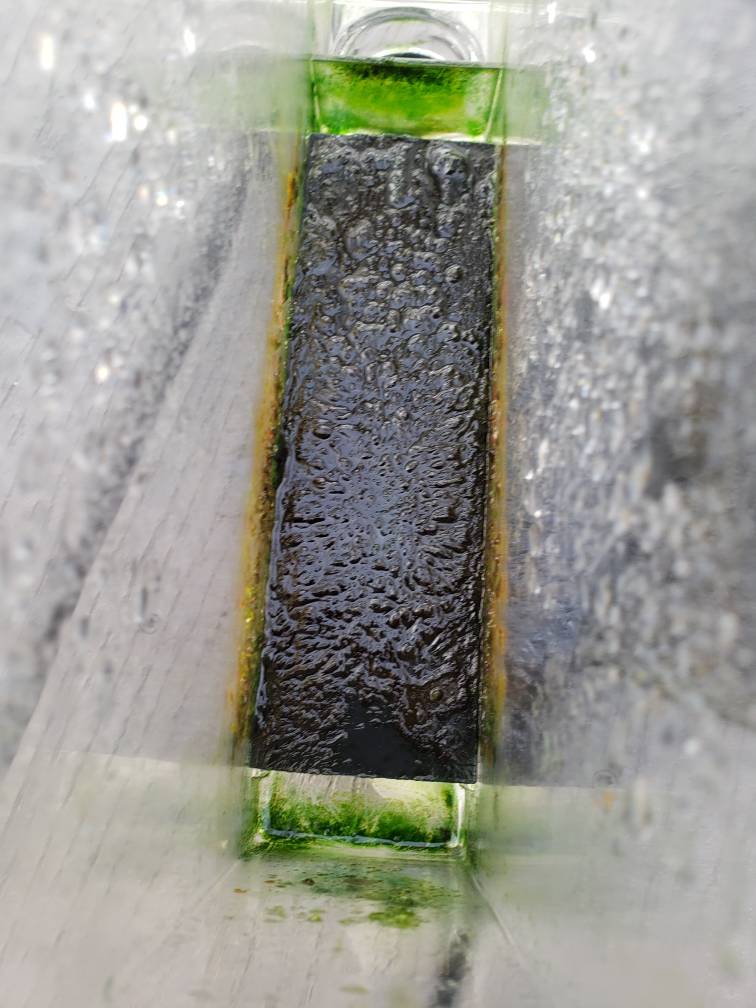 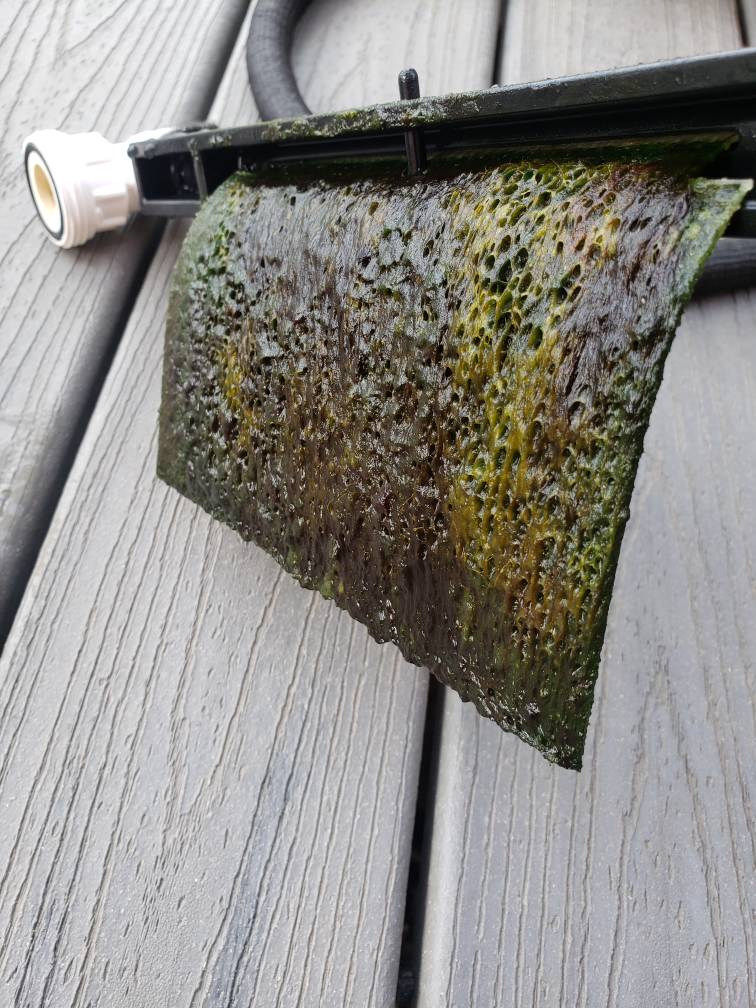 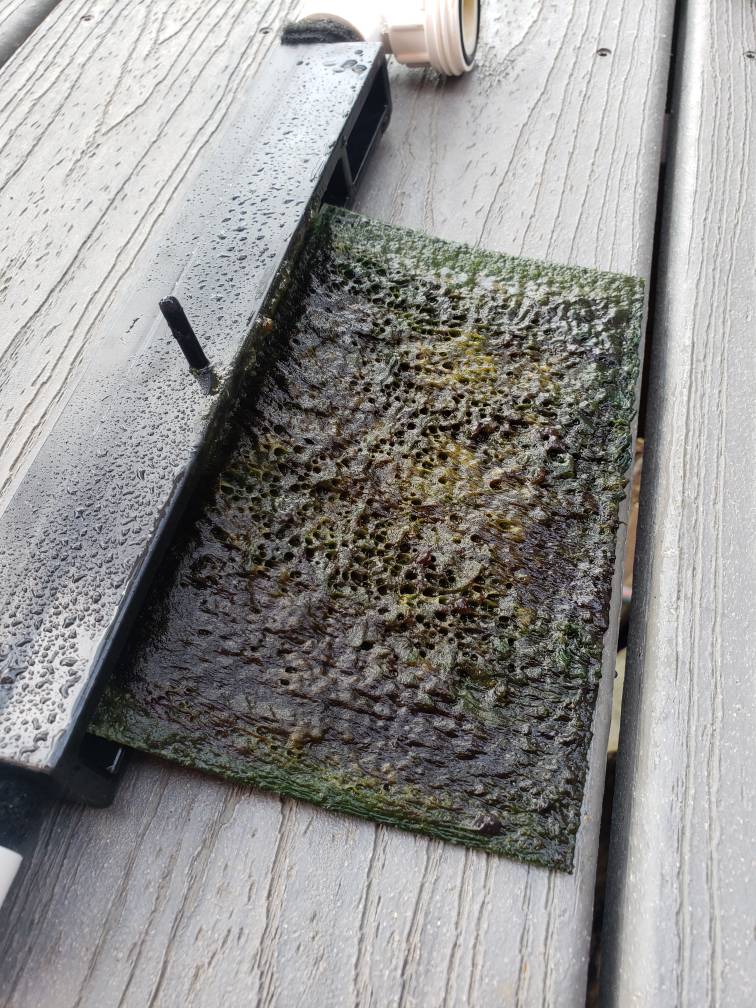 This is GHA coated with a type of slime algae. The slime is typically a phase, and can last for a few weeks or it can persist for months. It's not really anything to worry about, but you don't have enough growth on the screen to really necessitate scraping. The GHA mat has to get thicker before it will start to block out any light to the lower layers, so all you need to be doing at this point is taking the screen out and rinsing it under tap water while rubbing it with your fingertips - that will loosen up and rinse away the darker slime and should leave you with a thin lighter green mat of algae. The more of that left behind, the better. Scrub the top edge with the stiff brush and clean off the false bottom and slot every 2 weeks max.

You can do this rub/rinse as often as a couple times/week (I call that an "interim" cleaning). For good measure, you can scrape a bit every now and then, but keep it pretty minimal. What I have done in the past when starting up a screen is use the corner of the scraper and scratch in and "X" pattern on one side, and a "#" pattern on the other side.

Other than that, stay the course and keep us posted!
OP

Thanks for the advice! I think that that's my problem, I've been scraping everything off every week to week 1/2. I'll start to do the rinse and rub that you said this weekend! I'll definitely keep you posted on my progress! Thanks again!!
You must log in or register to reply here.
Share:
Facebook Twitter Reddit Pinterest Tumblr WhatsApp Email Link