Hi all, I am currently studying the captive breeding of Sexy Shrimp (Thor Amboinensis) and Skunk Cleaner Shrimp (Lysmata Amboinensis).

During my experiments I have noticed an apparent phonomonam with regards Thor Amboinensis. I started of with 6 Shrimp, all of similar size. Using my magnifying glass I identified 6 as Male. Unlike the hermaphrodite nature of Lysmata Sp. The gender of Thor was very easy to distinguish ,due to the obvious broken band at the rear of the abdomen. of the female and continues band on the male.

Initially I thought this was just my bad luck, as I had intended on having a breeding colony. After about 4 weeks, I noticed a metamorphosis in one of the shrimp. It now showed a distinct Female Band.

My first reaction was one of joy, at least now I would not have to search for a female. I observed the colony for another 4 - 5 weeks to see if maybe it was just a matter of sexual maturity. My observations found no change in the other Male Shrimps.

This is when my intrigue started to kick in. I tried to research about protandrous species to see if this included the Thor Sp. Unfortunately I was unable to find any evidence of this in any other articles.

This is where my experiment began. I removed the Female from the Colony and observed the other members. Approximately after 3 weeks, once again one of the males changed to female after a molt.

Again I thought this may be down to sexual maturity so I removed the second Female and once again observed the remaining males. After a period of 3 weeks and 4 days I noticed that once again a Male had changed over to Female.

I am currently monitoring the colony with the female still present, just to see if any more males turn to Female.

Now I understand that this may be just down to coincidance and that the males are just maturing into females at different rates, although it seems strange that they all started out about the same size and over such a long period of time the same incident occurs.

I will continue to monitor the colony for another 3 month and look for any signs of gender change in the remaining colony. I would think a further period of 10 weeks should be enough to rule out maturity as the cause.

I would be very grateful if any one else could shine any further light on my observations.

Impressed that you had the foresight to remove the female.

Very interesting. I just got 11 of various sizes and haven't yet tried to determine how many are male / female. I just figured with 11 I should have a good mix, and they came in various sizes as well. I've only had them a week so they are still settling in (their own 10g tank). Hoping to breed them as well. Did you build your own kerisole?
OP

andrewkw said:
Very interesting. I just got 11 of various sizes and haven't yet tried to determine how many are male / female. I just figured with 11 I should have a good mix, and they came in various sizes as well. I've only had them a week so they are still settling in (their own 10g tank). Hoping to breed them as well. Did you build your own kerisole?
Click to expand...

Hi, the most successful breeding projects I have come across do not use a Kreisel Tank. In fact the paper H.A.S.U. Hettiarachchi and U. Edirisinghe in Sri Lanka used a simple 108 Litre tank with a simple airlift at one end. This system produced the quickest metomorphesis and highest survival rate to settlement of the Lysmata debelius Species ever recorded. Larval period 50 to 90 days and survival rate from hatch to juvenile 18%. The key is in the food used. Diatom (Chaetoceros gracillis), L strain Rotifer Bracheonus plicatillus and Brine shrimp fed with C. vulgaris. All of these can be purchased as Culture stock from the web. My aim is not to reproduce any commercial size breeding project but to develop methods that can be used by the average reefer within their main display tank. The method I am trying to develop can hopefully be applied to a number of species. I use a Vossen Larval Trap within the display tank, these can be purchased for about £30. The trap uses a small led light, an airlift using a rigid pipe and air pump. The light can be left on each night. Once the larvae hatch they are instantly drawn to the light, lifted up the airlift into the circular chamber where the flow exits through a large fine mesh on one side. The larvae can then be raised within the trap without removing from the DT. I hope this method will encourage more reefers to raise some of their own stock and hopefully reduce the need to collect from the wild. I still have much research to complete. Rather than throwing the kitchen sink at the project and just seeing what works, I am trying to find the simplest and least time consuming way that can still produce success. I believe that the larger number of hobby breeders would out weigh the need for commercial survival rates. With regards Hermaphroditism in Thor Amboinensis I have recently discovered some new data which I will post in a new post. Good luck with your Thors. Here is a picture of one of my males. 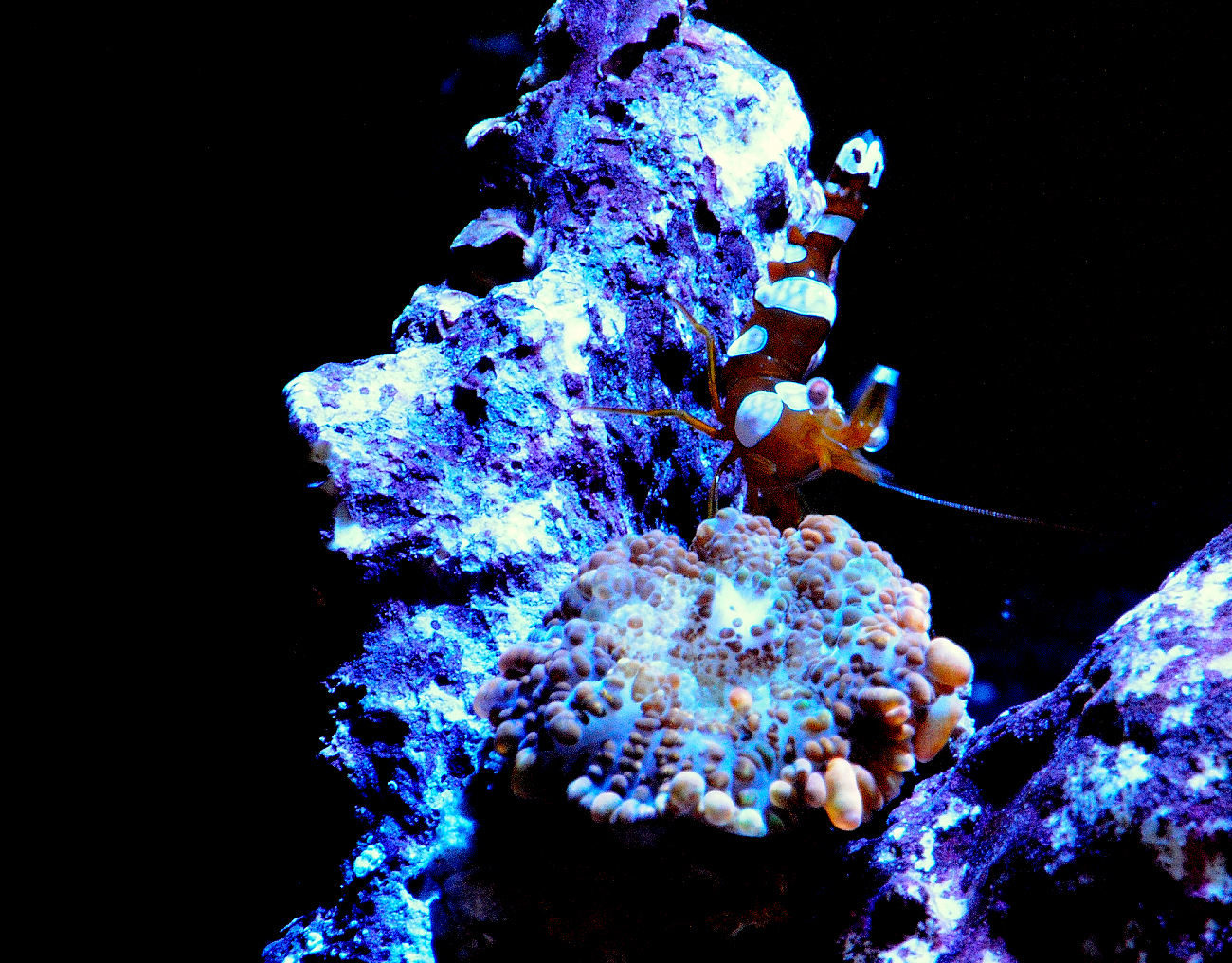 Its funny how you sometimes spend endless hours searching for information that would support a particular theory or observation you have had. Then by chance, the change of wording in your search suddenly brings forward the information you were looking for. Below is an extract from an article produced by (Seona Choi (author), University of Michigan-Ann Arbor, Renee Mulcrone (editor), Special Projects, Jeremy Wright (editor), University of Michigan-Ann Arbor.)

Sexy Shrimp (Thor Amboinensis)
Little is known about the reproductive cycle of this species in the wild. Sexy shrimp are capable of breeding year-round in captivity, assuming that environmental conditions are kept at consistently optimal levels. These shrimp are protandric hermaprhodites; they are born male and may change into females later in life. Transitional individuals, exhibiting characteristics of both sexes, have been found in the wild (transitional individuals most closely resemble females physically). Males can change into females in relatively short periods of time (less than 23 days); typically, larger males are the ones who undergo sex change. ("The official site for Thor ambionesis", 2010; Baeza and Piantoni, 2010)

Just in case like me you need to be reminded what the heck "Protandrous hermaphrodites" Here is a definition, thanks to the friendly Wikipedia.org

Protandrous hermaphrodites refer to organisms that are born male and at some point in their lifespan change sex to female.Protandrous animals include clownfish. Clownfish have a very structured society. (Wikipedia.org)

I have included a link to the article below. Some excellent and detailed information on our little friends the Sexy Shrimp.

Link to an excellent paper from Researchgate. https://www.researchgate.net/profil...onopolization-and-Sex-Allocation-Theories.pdf
M

Any update on the progress of your breeding? I just noticed my sexy shrimp female is carrying eggs and I am looking to try to raise them.

loos like we have a few of us here currently working on breeding projects! @Tony Thompson I'm curious to know how you've made out?

@andrewkw I'm curious to know how much you paid for your shrimp in the KW area, I'm on the hunt for about 6 more and they don't seems to be the most common around here.
Last edited: Jan 10, 2019

Shawn.B said:
loos like we have a few of us here currently working on breeding projects! @Tony Thompson I'm curious to know how you've made out?

@andrewkw I'm curious to know how much you paid for your shrimp in the KW area, I'm on the hunt for about 6 more and they don't seems to be the most common around here.
Click to expand...

I got mine from J&L Aquatics in Burnaby BC. They were cheap I can't recall but under $10 each I think. Typically they can be found for about that or maybe $14.99 at any big al's. If you buy 10 or more you should be able to ask about a discount.

I still have either 6 or 7 (I think 6) from the original 11 I bought almost 1 year ago. One jumped and one died in the open but the others disappeared. This is not my first time keeping Sexy Shrimp but this is the largest group I've ever had. They seem to have eggs a lot less then I expected so I haven't tried catching any females with eggs yet. I really should pay more attention to them. The tank mine are in is so overgrown it can be difficult to just count them all never mind determine who is carrying eggs. Originally it was going to be more of a project less of a reef but it's turned into a beautiful soft coral nano reef.
M

I have a group of 5 (4 females, 1 male). I usually see the females with eggs but I have not tried to raise them. It would be extremely difficult to get the female out of the tank to have her release the eggs in a safe tank. I just purchased a Vossen Larval Trap. I’m hoping this will allow me to collect the larva in my display tank.