So it begins! My 33 gallon nano adventure

This is my first adventure in saltwater and reefing, though I've had freshwater tanks for 20+ years. I will already declare that I'm addicted. My wife thinks I have a problem, actually...

I've had my 33 gallon nano up and running since early August last year. I took my time and cycled my rocks in rubbermaids for 5-6 weeks and then another month or so in the tank before adding hermits, snails and fish. I believe the tank was roughly 4 months old before I added my first corals and started with a couple frogspawn frags. Once they showed signs of being happy/healthy I added a few more (mix of lps/easier sps) and have slowly added more over time. Aside from an unplanned 30hr power outage back in late November (lost my banggai cardinal) it's filling in nicely and everything is showing signs of growth, good polyp extension and hungry appetites...

Here are a few progress pics along the way, I'll update the thread later with a list of all the livestock.

First attempt at a reef aquascape... 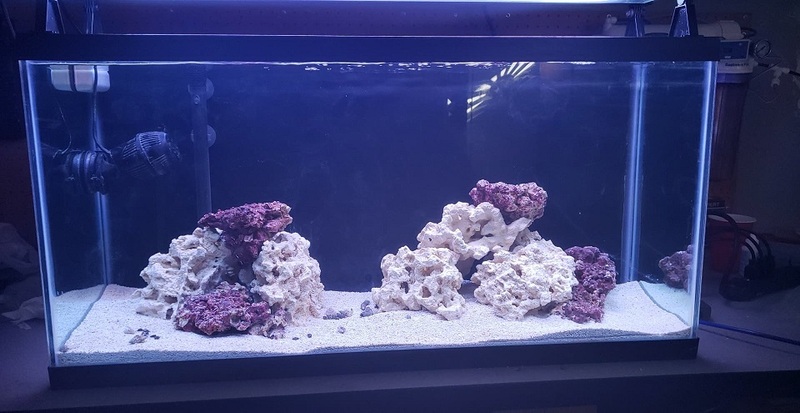 The aquascape I settled on after changing out a couple T5 bulbs and adding a few corals... 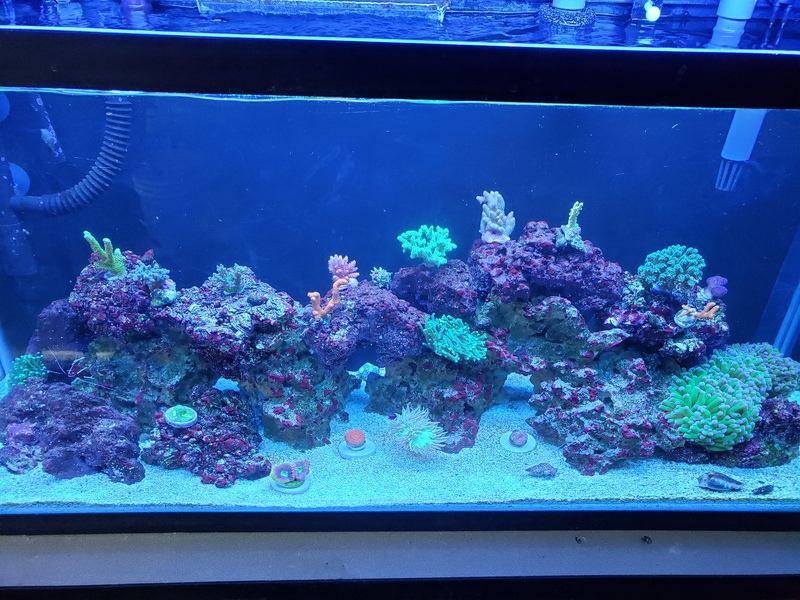 Thanks! I'm pretty proud of it so far.

The tank looks great and thanks for sharing the pictures!

Welcome to R2R, thanks for sharing your pictures! The tank looks awesome

SPR1968 said:
The tank looks great and thanks for sharing the pictures!

Thank you for the kind words and for stopping by to see my slice of the ocean!
OP

Thank you very much for the compliment and for the warm welcome!
OP

Chrisfish said:
Welcome to R2R, thanks for sharing your pictures! The tank looks awesome
Click to expand...

Thanks! I really appreciate all the friendly folks around here. It's an encouraging community [emoji2]

Thanks! I'm loving how it's turned out so far.

Sidius said:
Thanks! I'm loving how it's turned out so far.
Click to expand...

Yea, it truely does look great !

Thank you! Like most, I'm sure... It took me a few tries before it felt complete.. I liked the first one but wanted more space up top for sps lol
OP

Here's the current fish/coral/invert lists for what I have in my tank. I'll also take some pictures later today once the lights are on and the corals open up.

Tank is overall looking good. There are a few curious things I'm tracking but at times I do feel like I don't know what I'm looking for in regards to corals since its all new territory for me.

Alk consumption suddenly slowed a few days ago. I noticed my alk had risen to 9.5 so I stopped dosing Brightwell reef code B and monitored. It has slowly dropped to 9.0 over the last 2.5 days and I think I'm going to keep letting it fall to 8.5 and maintain it there. Calcium consumption has stayed fairly steady.

It was my birthday this last week so my wife treated me to a couple new fish. She felt that the clownfish needed a partner and I also picked up a azure damselfish. The clowns instantly paired together (they're both small @ approximately 1-1.25") and the azure has quickly become one of my favorites.

Here are some pics taken today. Please excuse the extreme blue. My phone doesn't handle the blue light well and I don't have a lens cover yet. 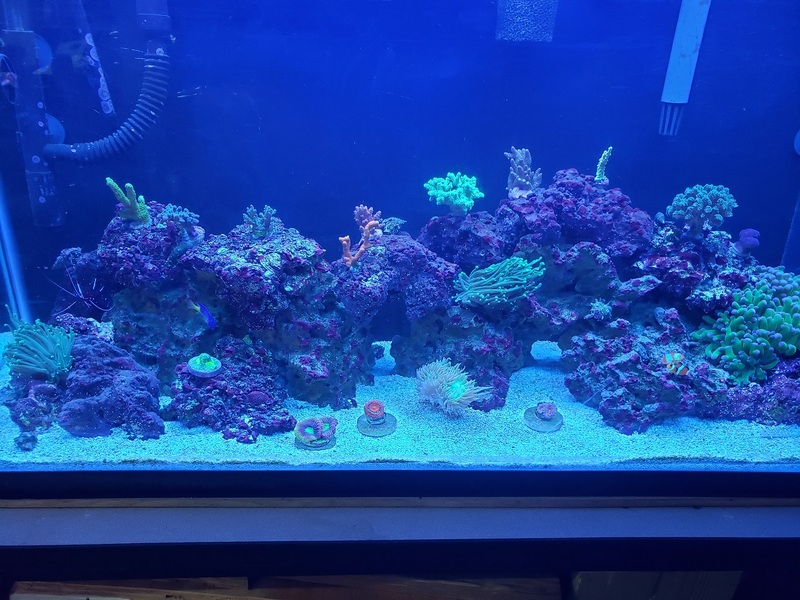 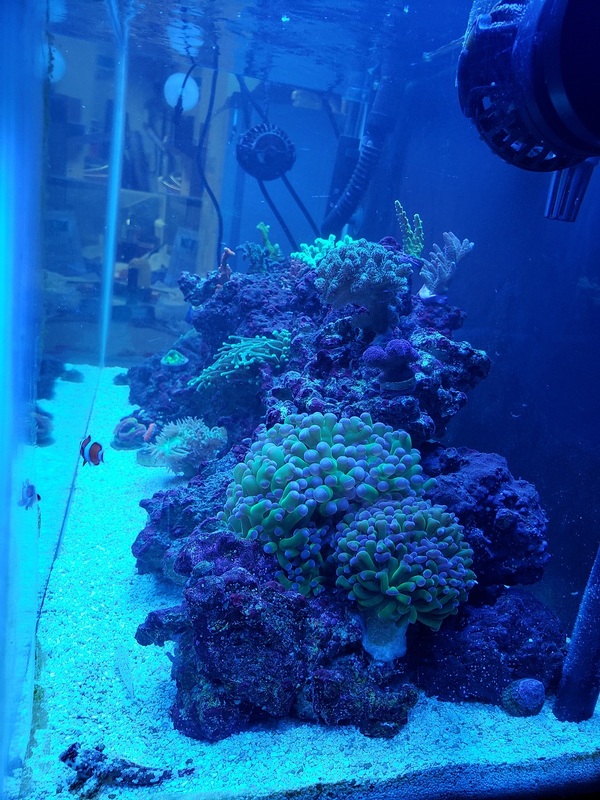 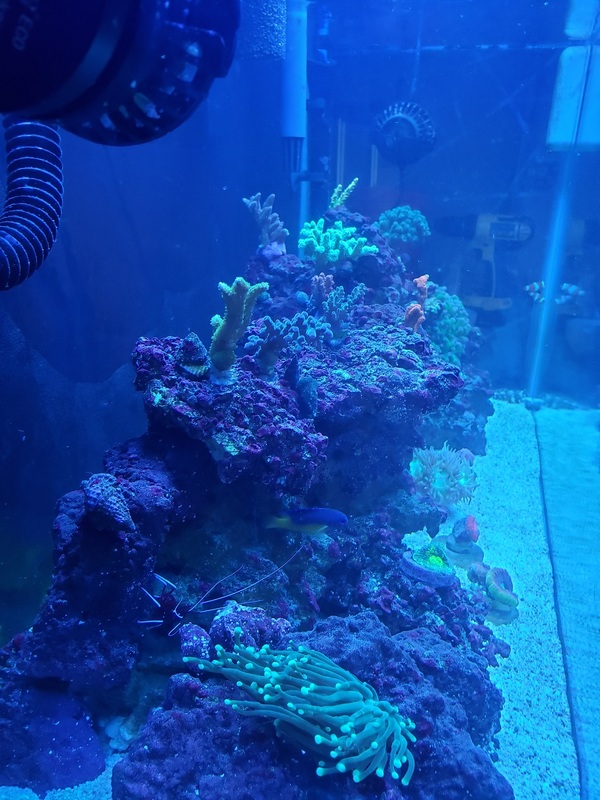 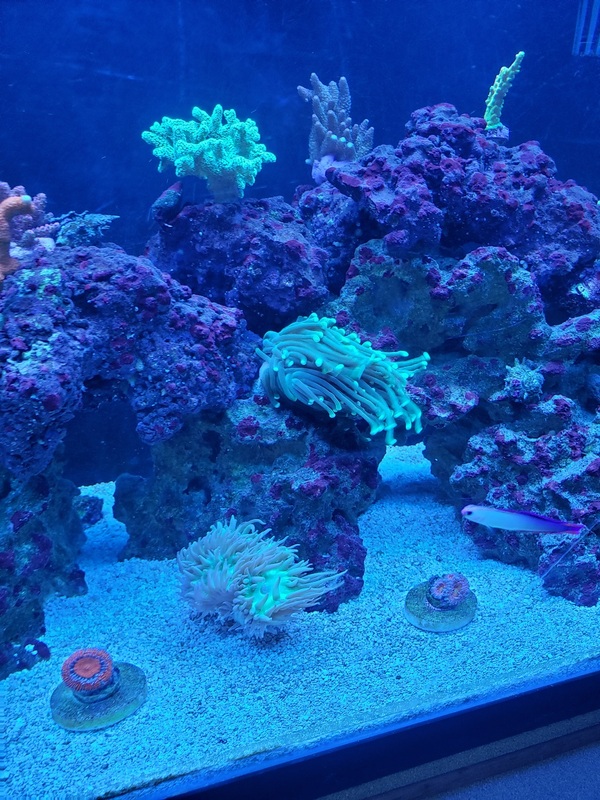 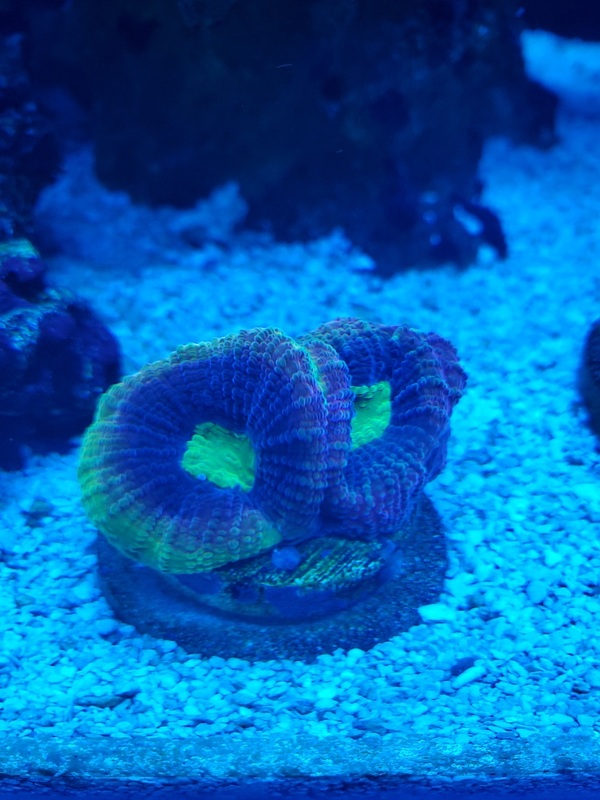 So it seems like the last week was a big week for the snails in my tank. I found baby Trochus snails crawling around the rocks at night (tried to get a pic but my phone struggled to focus with a flashlight for lighting). I also found a few groups of Cerith snail eggs and caught my spiny star astraea's spawning. Time will tell if the cerith's and astraea's turn into actual babies but the Cerith eggs have either hatched or got eaten lol.
OP

It's been a while since I've updated this...

I lost a couple corals over the summer while someone was watching my tank. I was gone on vacation for a couple weeks and they overfed which caused a nutrient spike, cyano outbreak and I've also been dealing with a bit of a bubble algae outbreak by using Vibrant. After many many water changes and about 4 weeks over Vibrant, the tank is starting to look nice. I've also since changed out my 4bulb T5 fixture for a pair fo Noopsyche K7 pro II's. The corals have responded very nicely since the change. I mainly just wanted to get them acclimated to the light before I get my 110 gallon upgrade setup. I plan to use these lights in conjunction with an Aquatic Life T5 hybrid. 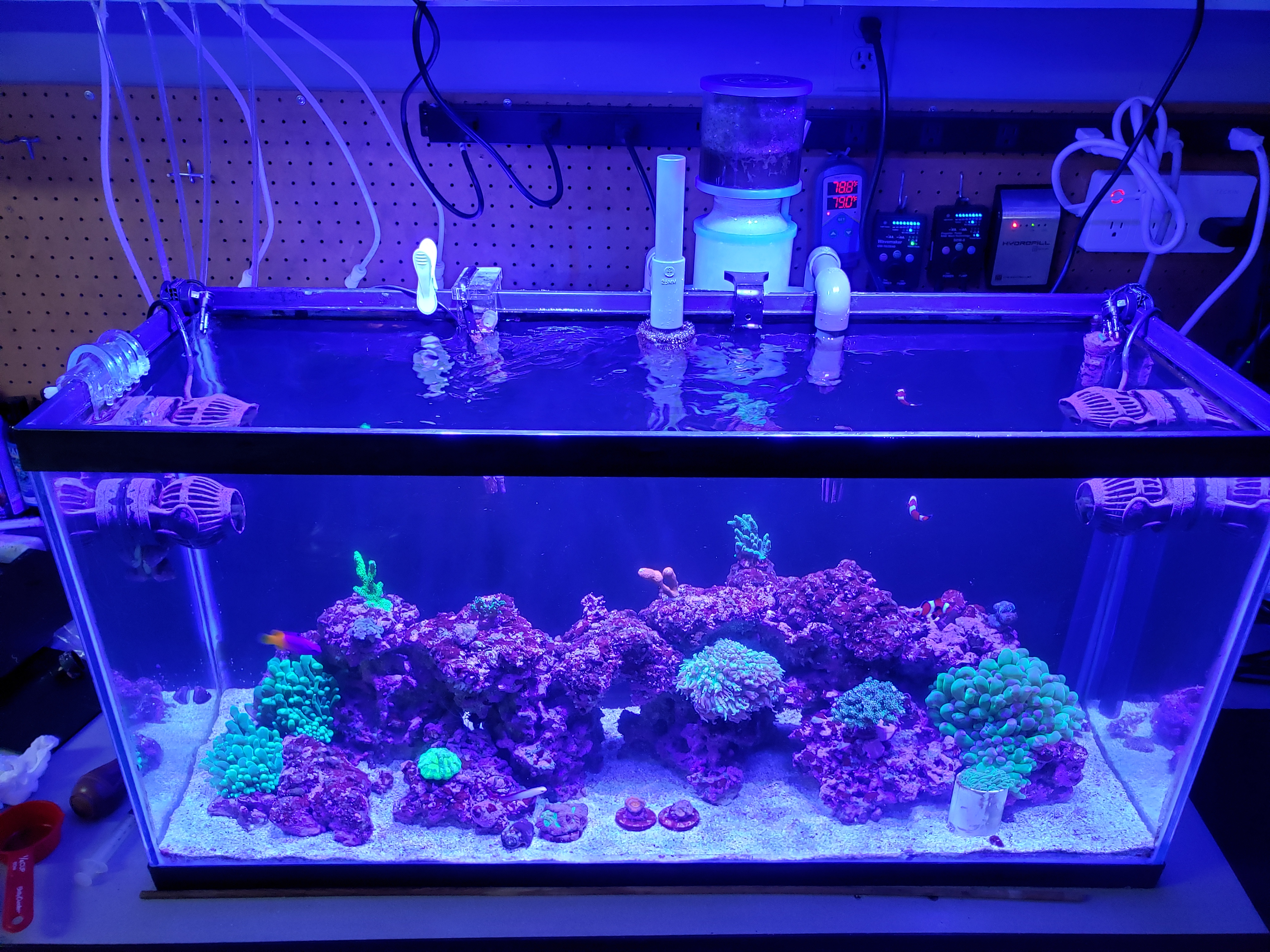 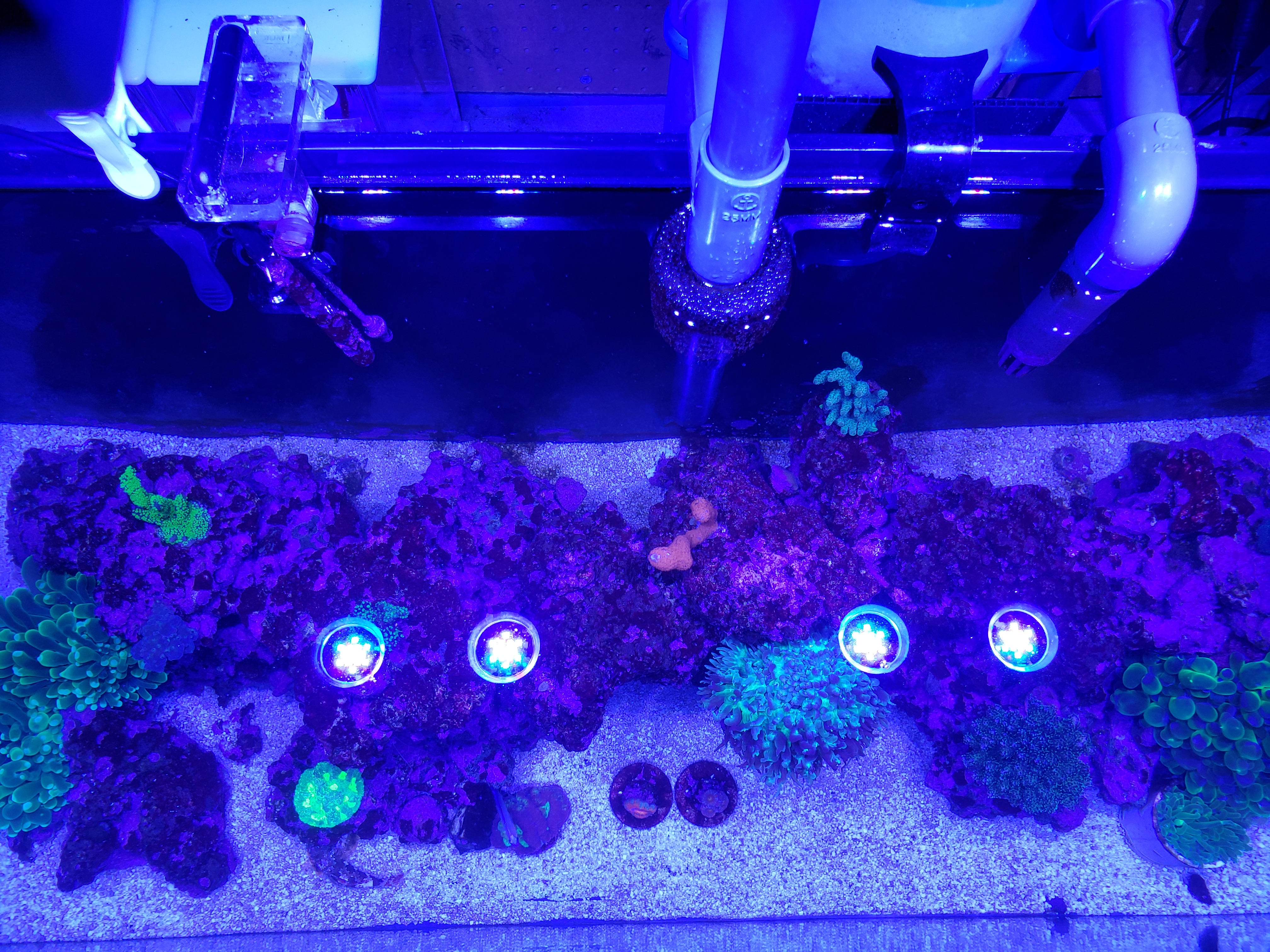 I'm out of town on a business trip but wanted to update this..

Before I left, I had been fighting off a Cyano outbreak, while trying to get my nutrients balanced. I'm hoping to avoid using Chemiclean for now because this tank is sumpless and my skimmer is a HOB. I'd have to take it offline and get an air pump if I went that route. Treating it like a learning experience in trying to get things under control without what I call a "shortcut" like Chemiclean.

Anyway, here are a few coral shots. (edit: I'm not sure why but the R2R image link seems to have changed the pics sideways, even though they're not in google drive) 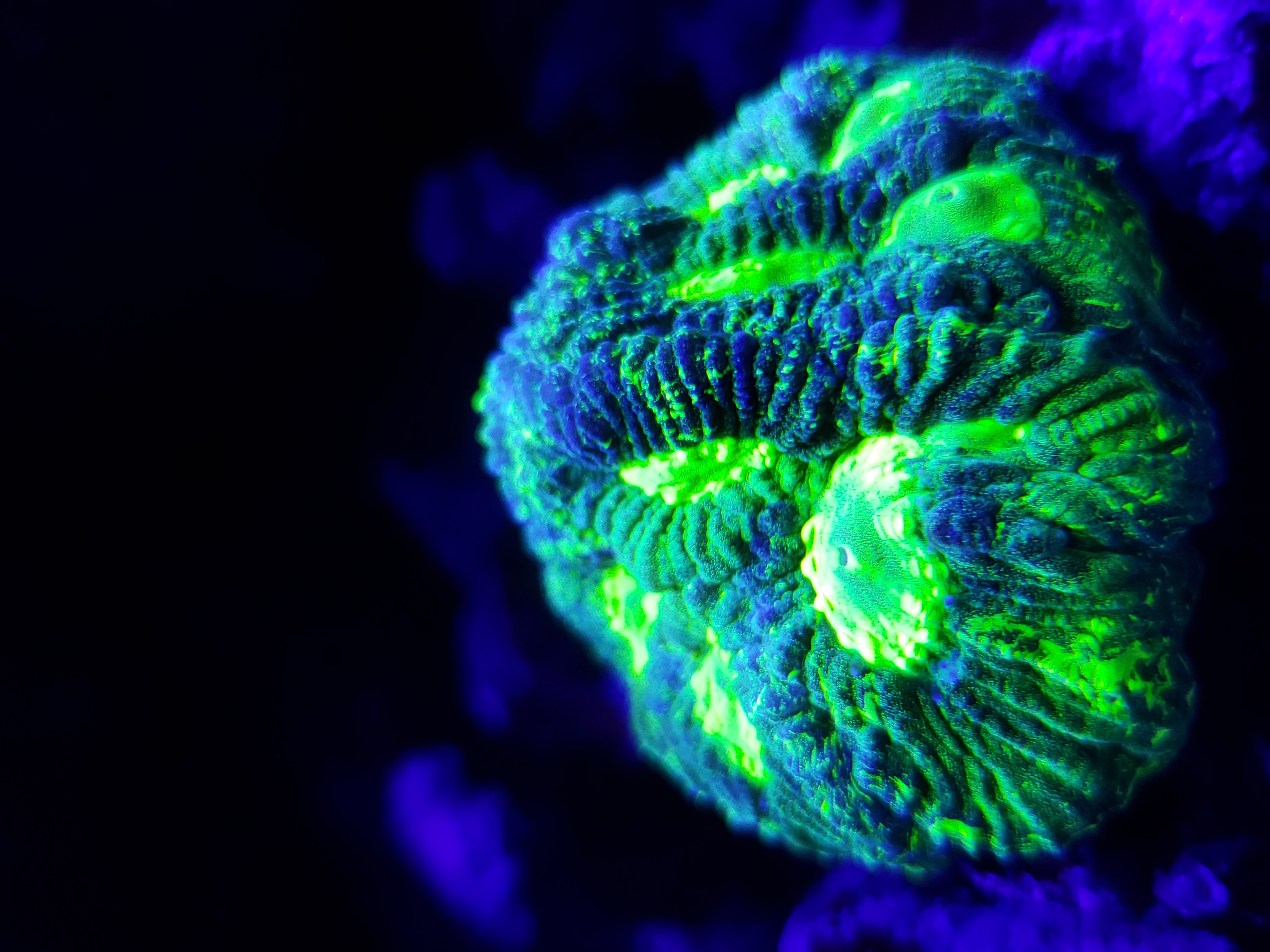 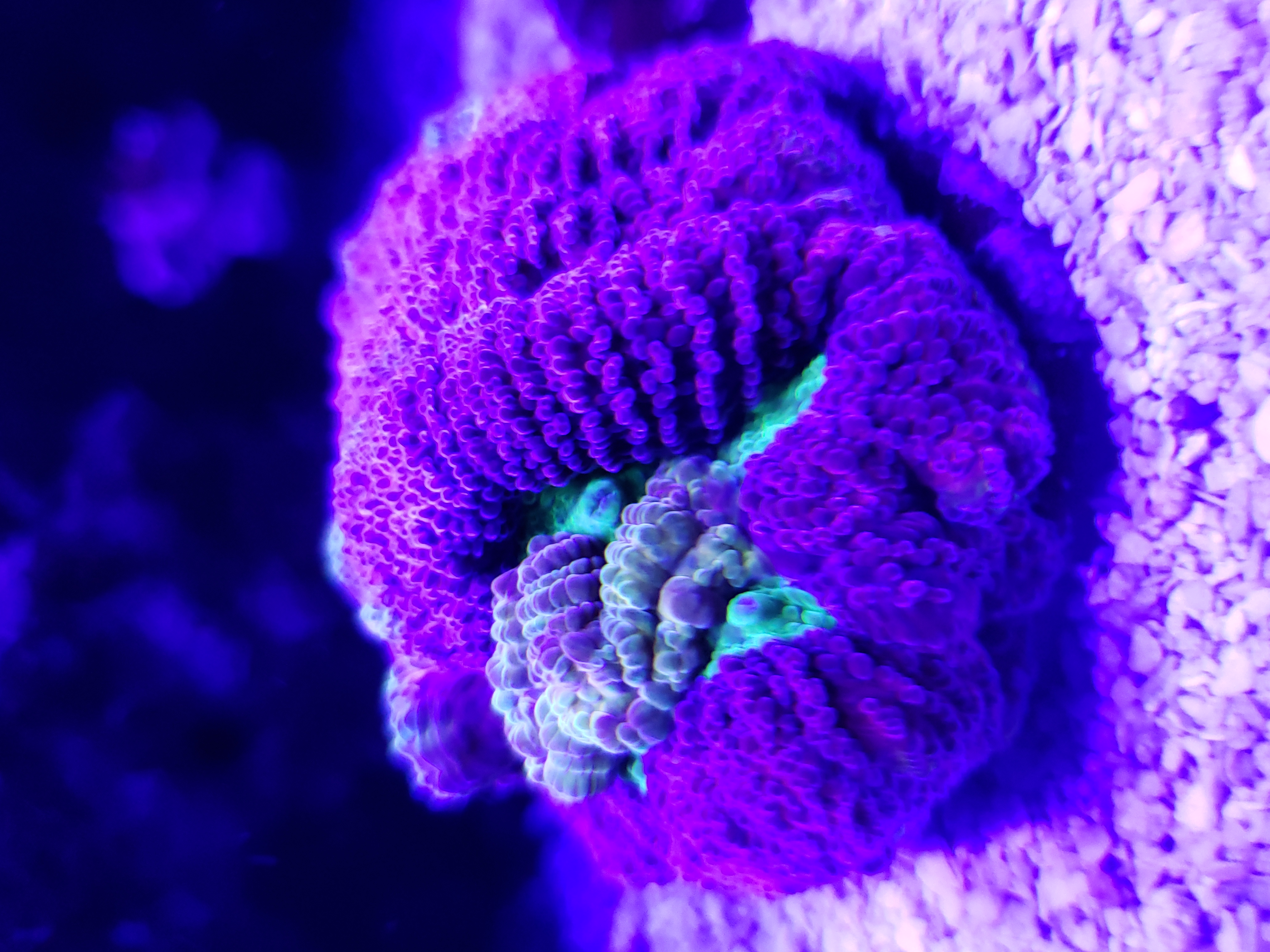 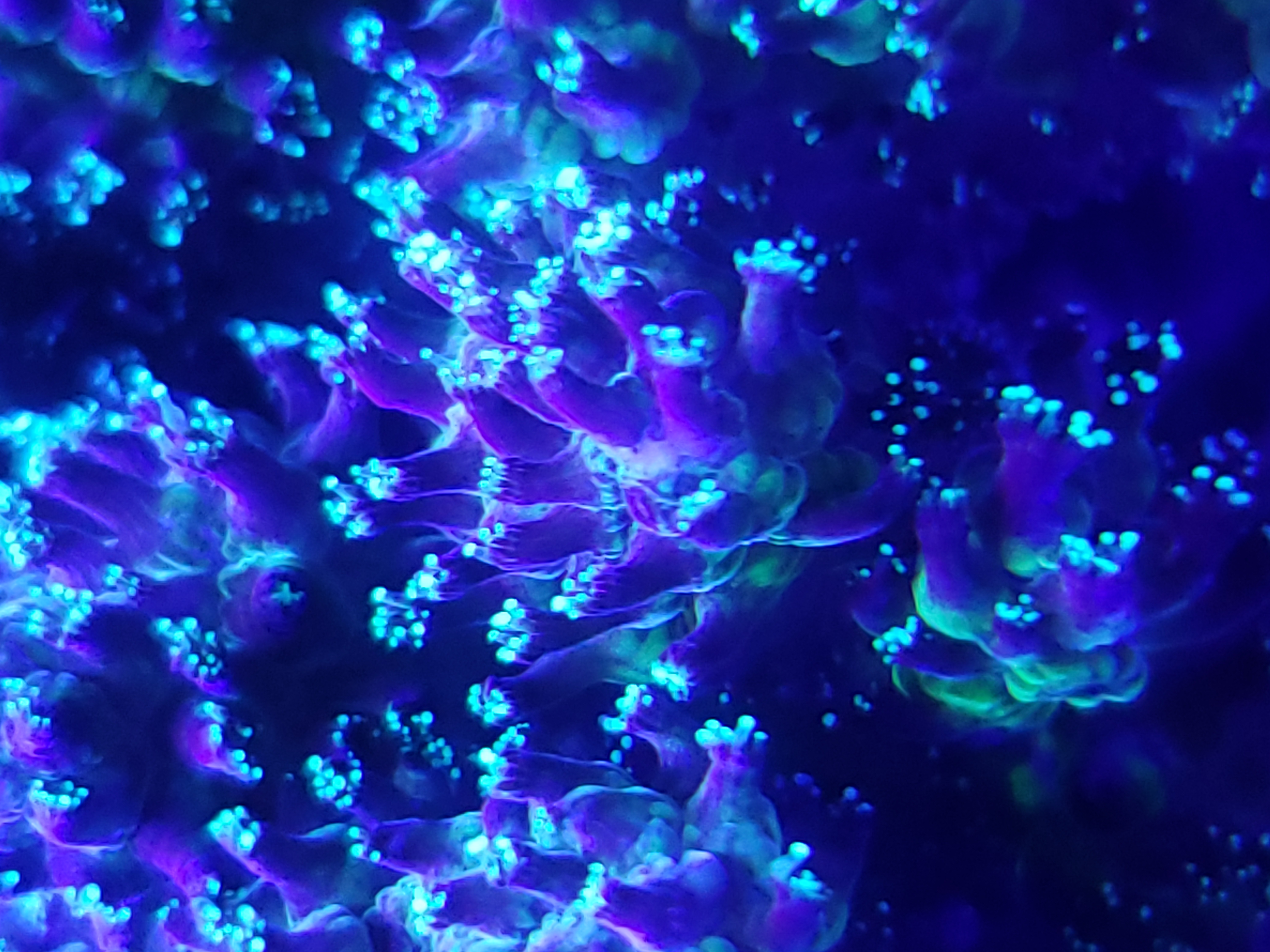 No picture update this week. I have no time to take them with relatives in town for the Canadian thanksgiving. I have been going through more beginner mistakes and seem to have some Dinoflagellates. I think I was too aggressive with my water changes, cutback my feeding too much and coupled with using both Vibrant and Microbacter7 to address my cyano outbreak, might have caused it (nitrates and phosphates are undetectable with Salifert tests). I didn't know it was possible to have both Cyano and Dino's at the same time, because I thought they thrived in different conditions but it seems that way. Since I'm working on a tank upgrade that will hopefully be up and running in the next couple months, I'm trying to treat this as a learning experience. An opportunity to learn how to recover from these mistakes and treat these things with as natural a way as possible. I've upped my feeding a little and I'll be continuing with Vibrant dosing to finish off the last remaining bubble algae.