Switching from salt fish only to reef.

Hi all, I’ve been on R2R for about a year and a half now. I’m not new to salt tanks, in fact I’ve been keeping salt fish for over 40 years—but, although I have wanted to for quite some time, I’ve never taken the dive into reef. What looked like the start of a major leak in my 90-gal salt fish tank led me to shut the whole thing down and start over going reef this time.

I’m grateful for the helpful suggestions and advice I’ve gotten on this site, as well as from many BRS-TV vids. I feel this has helped me make better decisions in this build process.

With several starts & stops in the build process over the last year & a half, I am now, finally, almost ready to add water & salt and start the tank up. This first instalment in my build thread will cover the tank, stand, and hood.

My fist decision was what size tank I should go with. The tank I’d just shut down was 90 gal, so I decided to move up to a 150 gal. Next was deciding what style of tank I wanted. Maybe I’m old school, but I like a rimmed tank with a fully enclosed hood on top. When the lights are on, the only thing I want eyes drawn to is the tank and what’s in it—I don’t like light spilling out into the room. I also don’t like the idea of “stuff” falling into a delicate eco system such as a salt tank whether just fish or full reef. A fully enclosed hood takes care of both of these issues.

The new tank is 6’ long, 18” deep, and 29” tall, which is great for a display tank, but I would have liked more depth in order to make the aquascape more interesting. I’m a scuba diver and have seen several 24” & 30” deep reef tanks with aquascapes that looked stunningly realistic. With any somewhat expensive project, however, sometimes compromises need to be made, and the 18” deep tank was more within my budget. I chose a “Reef Ready” tank that has internal spillovers and drain & supply holes in the bottom. Rather than put some printed aqua scene on the back glass, I painted it blue. 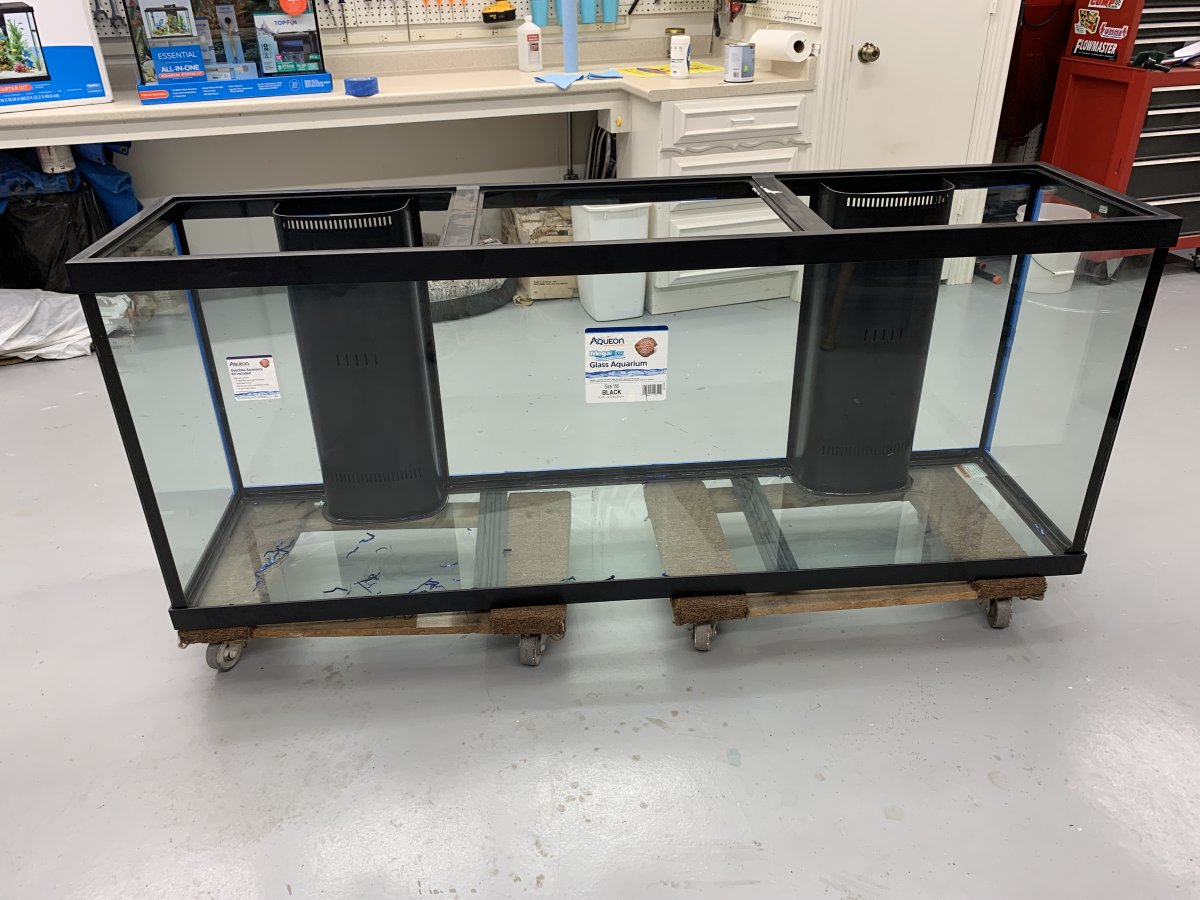 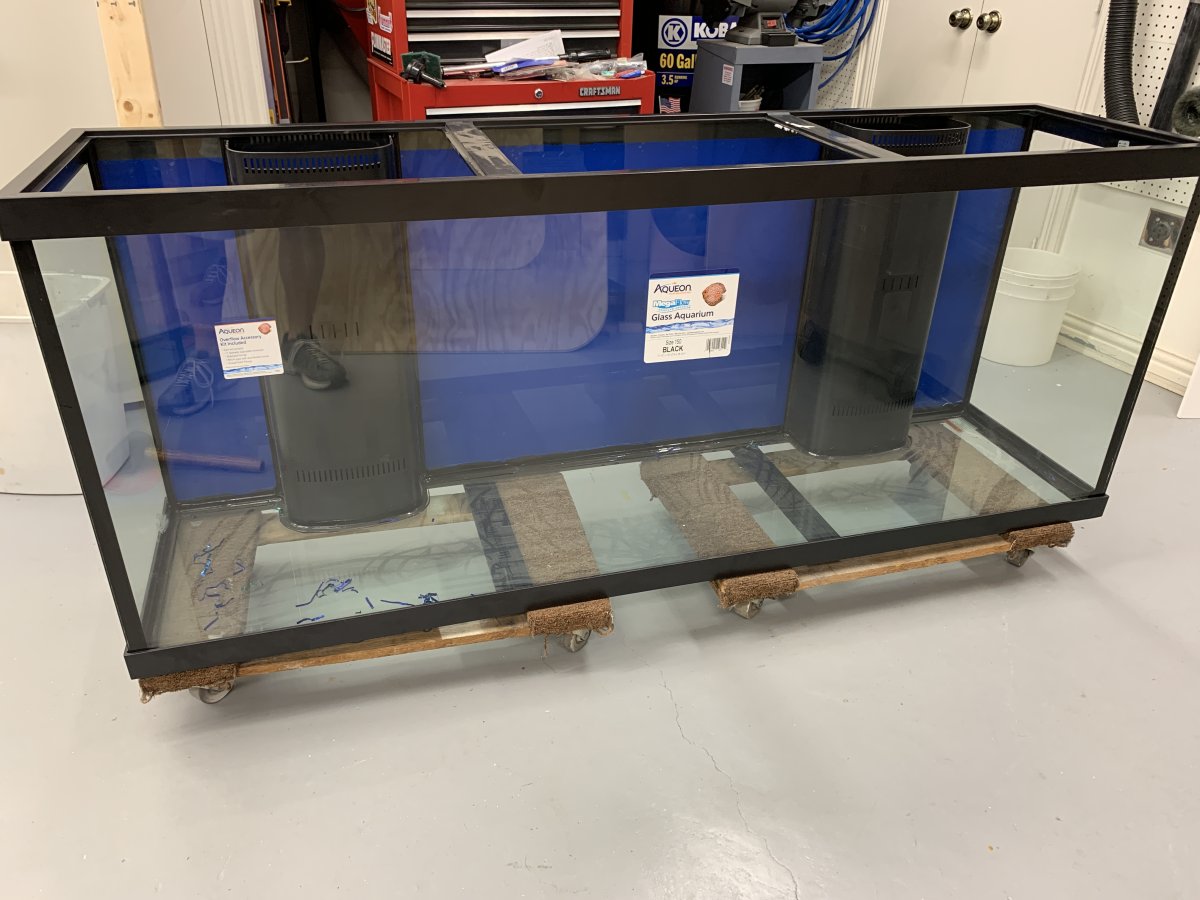 Next was the stand—buy a premade stand that fits the tank, or build one myself. I chose the latter, mostly because I’m more of a hands-on guy, and I knew I could customize the stand so it would be exactly the way I wanted it. I knew a 150 Gal tank, with water, rocks, gravel, and a hood with lighting installed would be well over 1,500 lbs., not to mention the sump and equipment in the stand. So I overengineered the stand a little with 4x4s at each corner and 2x4s glued & screwed at the bottom (for the sump support) and the top for the tank support. I chose a counter height dimension (36") for the stand height so the tank will be higher for better viewing. 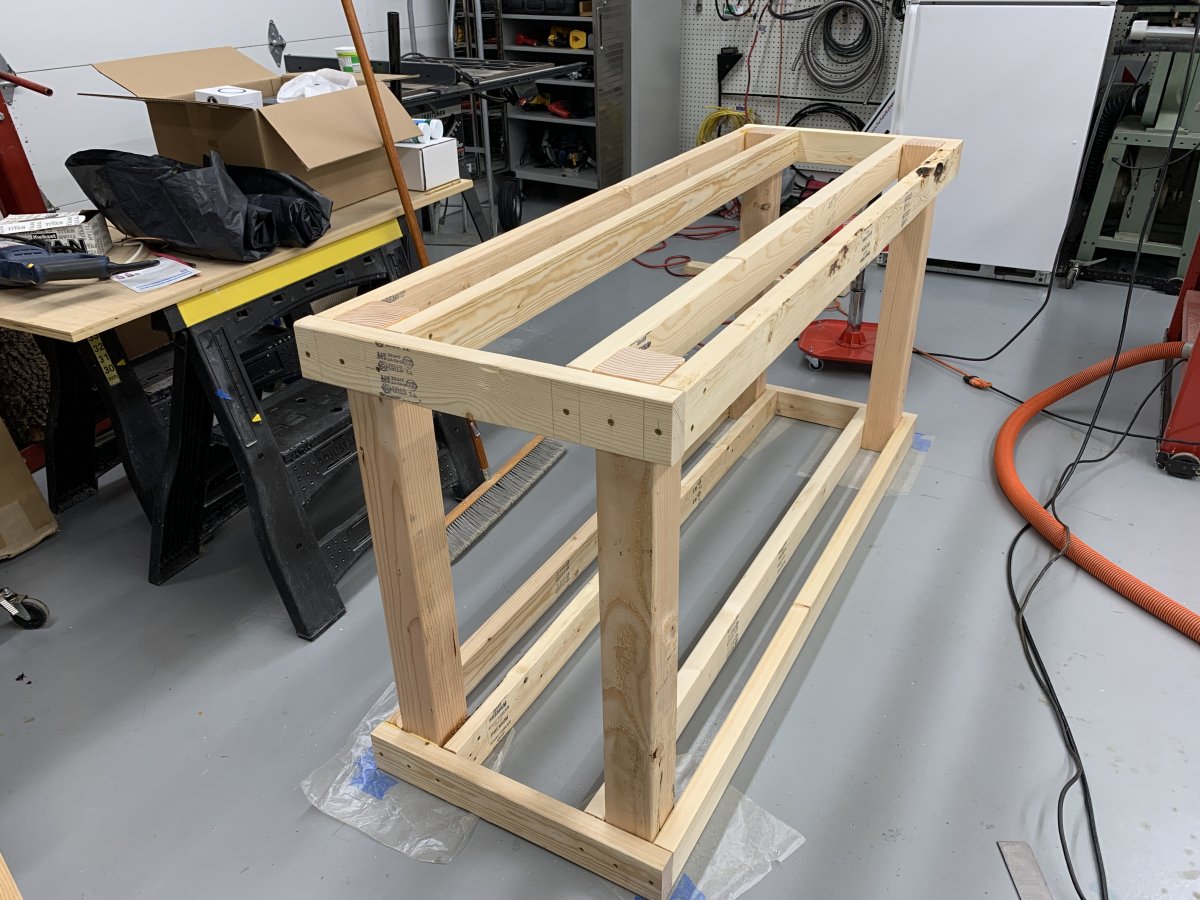 Even though the tank is 18” deep, I decided to make the stand 24” deep. This was to accommodate the equipment I wanted in the stand, as well as give me a shelf to work with while servicing the tank.

I then had my son-in-law, who works at a cabinet shop, cover the stand frame with oak, and make the hood outright. I think he did a great job!

With the internal wood structure and all the oak facia, this stand and hood, are heavy! Good thing it will be installed on the main over a concrete slab. 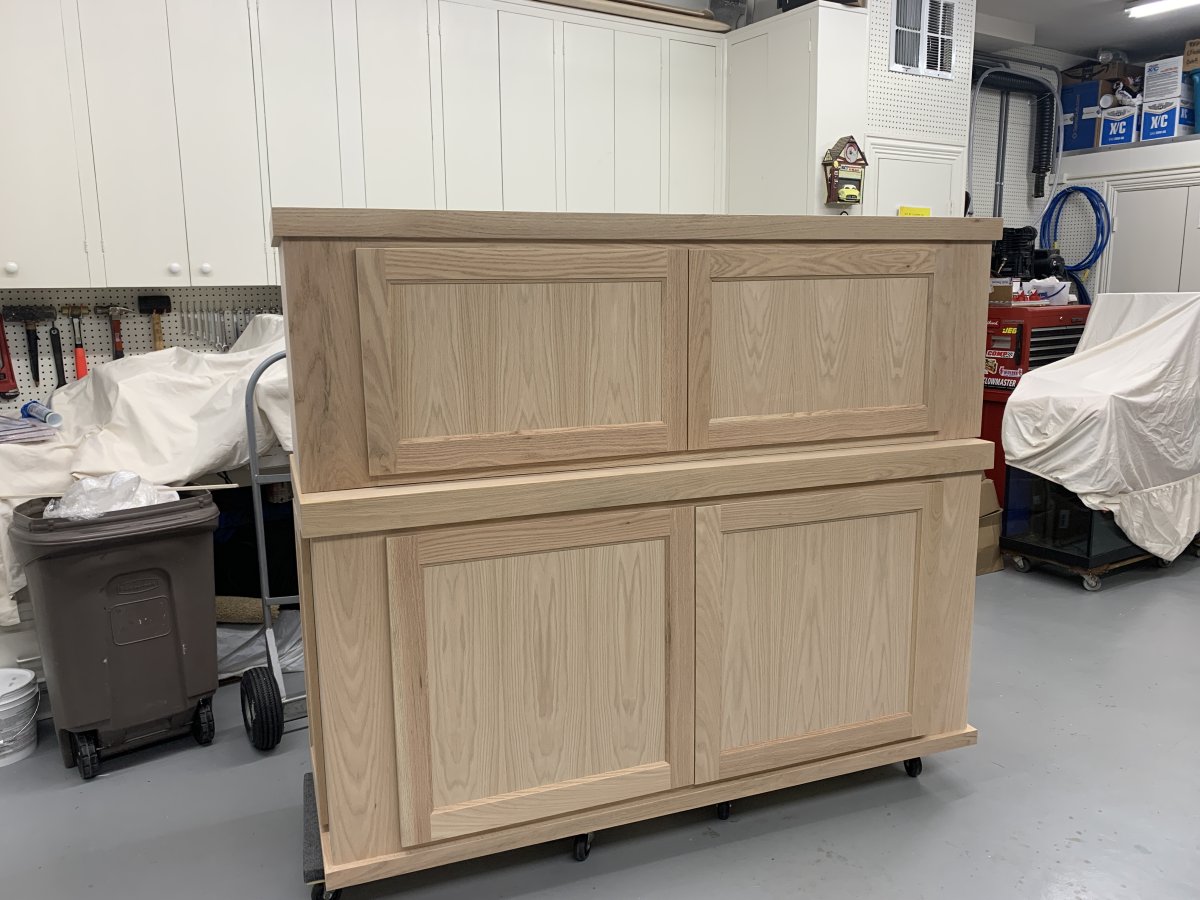 I stained the outside of the stand and hood black and added 4 topcoats of satin polyurethane. I painted all the pine skeletal wood with a high-grade exterior paint so if there are any leaks down the road the wood should be protected. 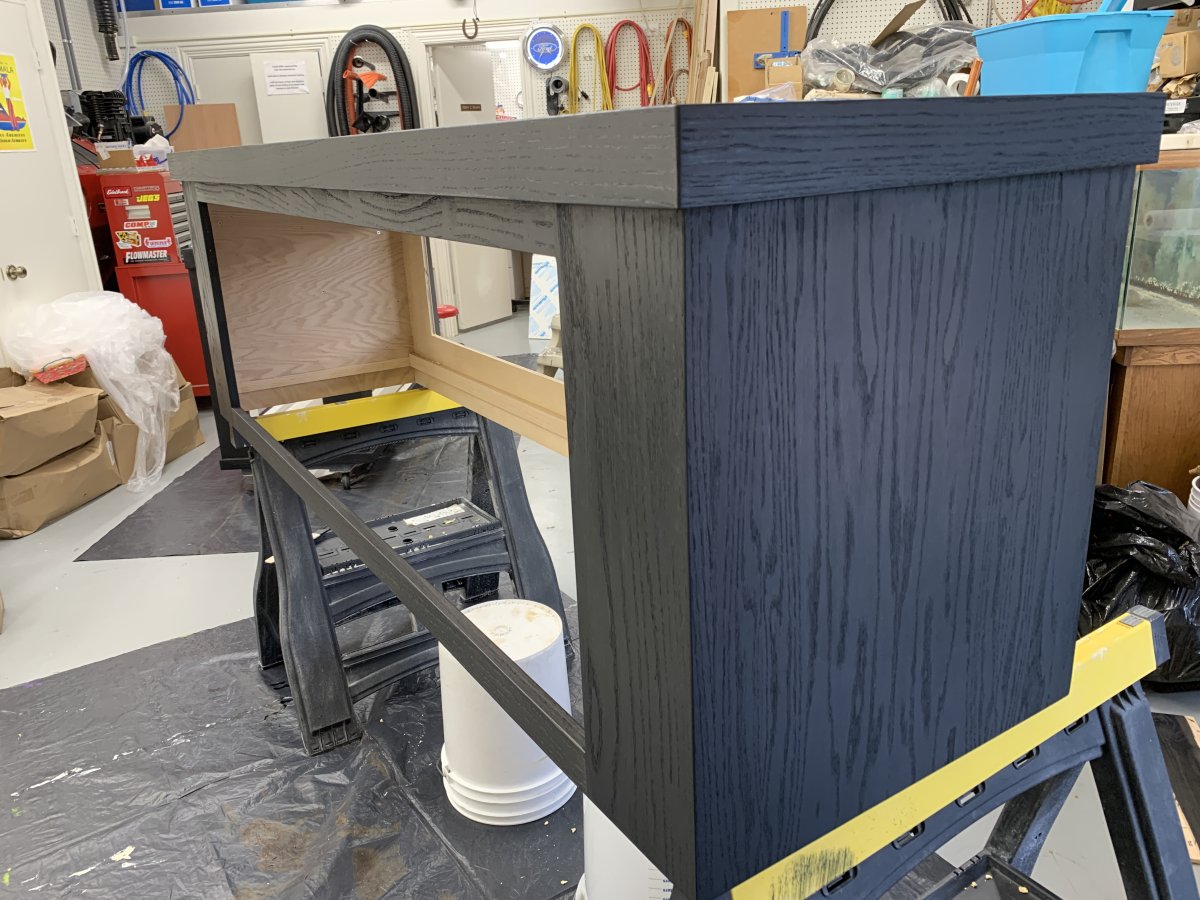 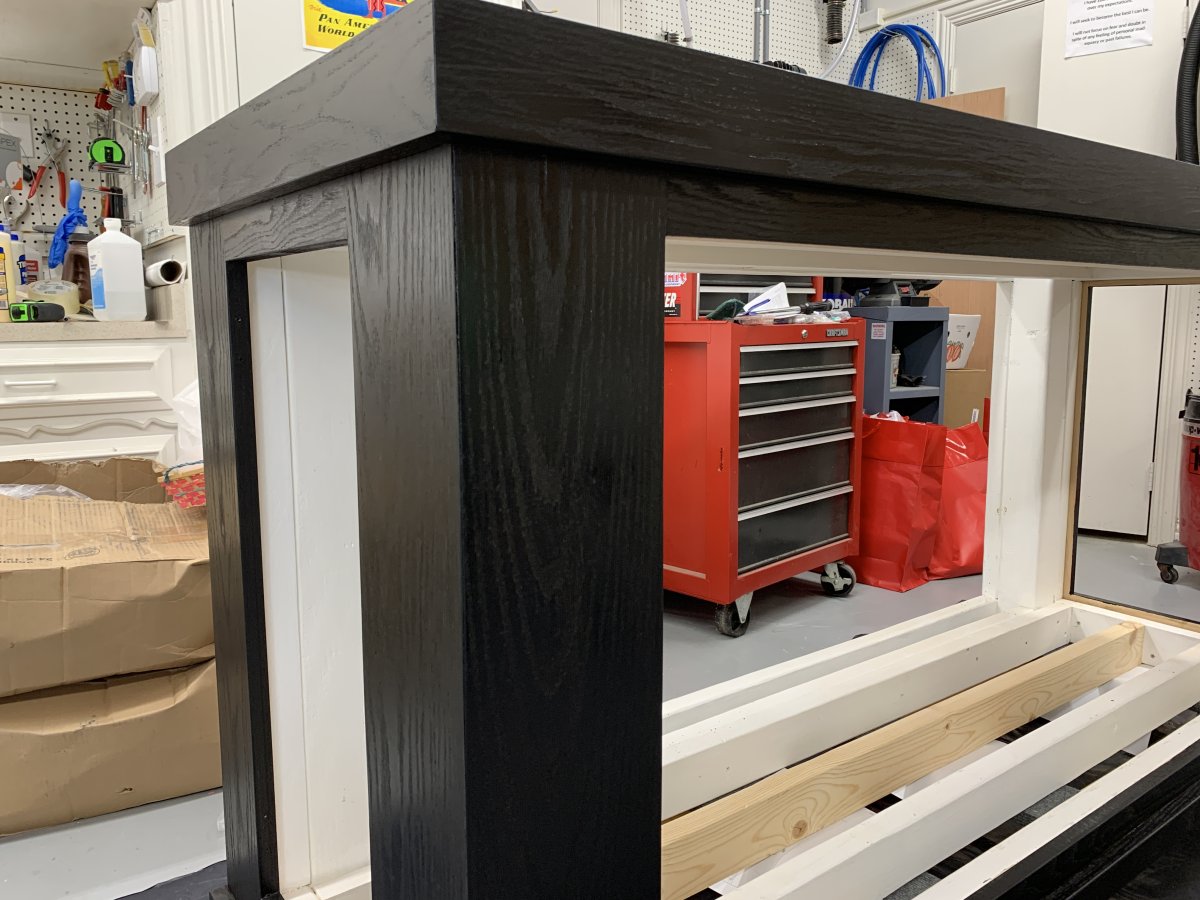 Below is the stand & tank (minus the hood) in place. I chose to paint the interior of the stand white to reflect work light better and just look cleaner. For the interior base, that the sump & other equipment will sit, on I installed ¾” King Starlight plastic sheet which will hold up well to minor spills during maintenance. I installed LED light strips in the top of the stand to act as work lighting for maintenance.

When we built this house 20 years ago, I lobbied for a floor drain here to make water changes, etc. easier. As you can imagine, my lobbying was unsuccessful. However, there is a bathroom vanity directly behind the wall the aquarium is up against. You can see a hole in the wall where I will run an 1-1/2” drain line through so I’ll have a full-time drain (plumbed into city sewar) inside my stand. More on that later.

Also in this photo you’ll see a double gang outlet. There is also a single outlet above that will be behind the hood. These are tied together and make a home run back to the panel and are on a separate circuit in a separate “emergency” panel that is designed to accommodate a future automatic standby generator. Now that I’m getting into reefing, I may make the standby generator a higher priority. 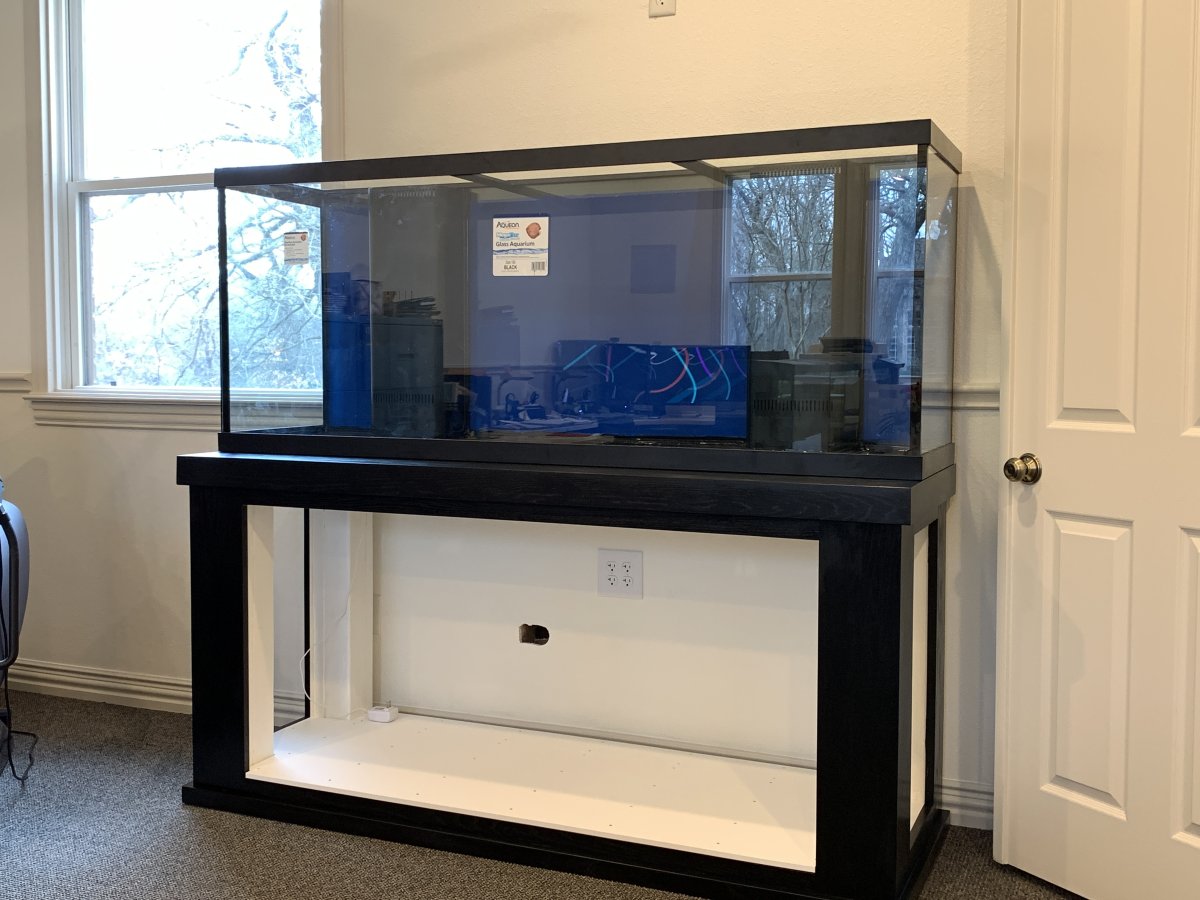 Below is the hood finished (including lighting, but I’ll cover that later). I also chose to paint the interior of the hood (and inside panels of the doors) white to help reflect & diffuse the LED lighting better. I added four 4” exhaust fans in the hood to help keep the LED panels cooler & keep tank temps down in the summer months. These fans are almost inaudible at their lowest setting but still pull quite a bit of air. If needed, I'll run them at full speed to help cool the tank if summer temps get the tank too warm. 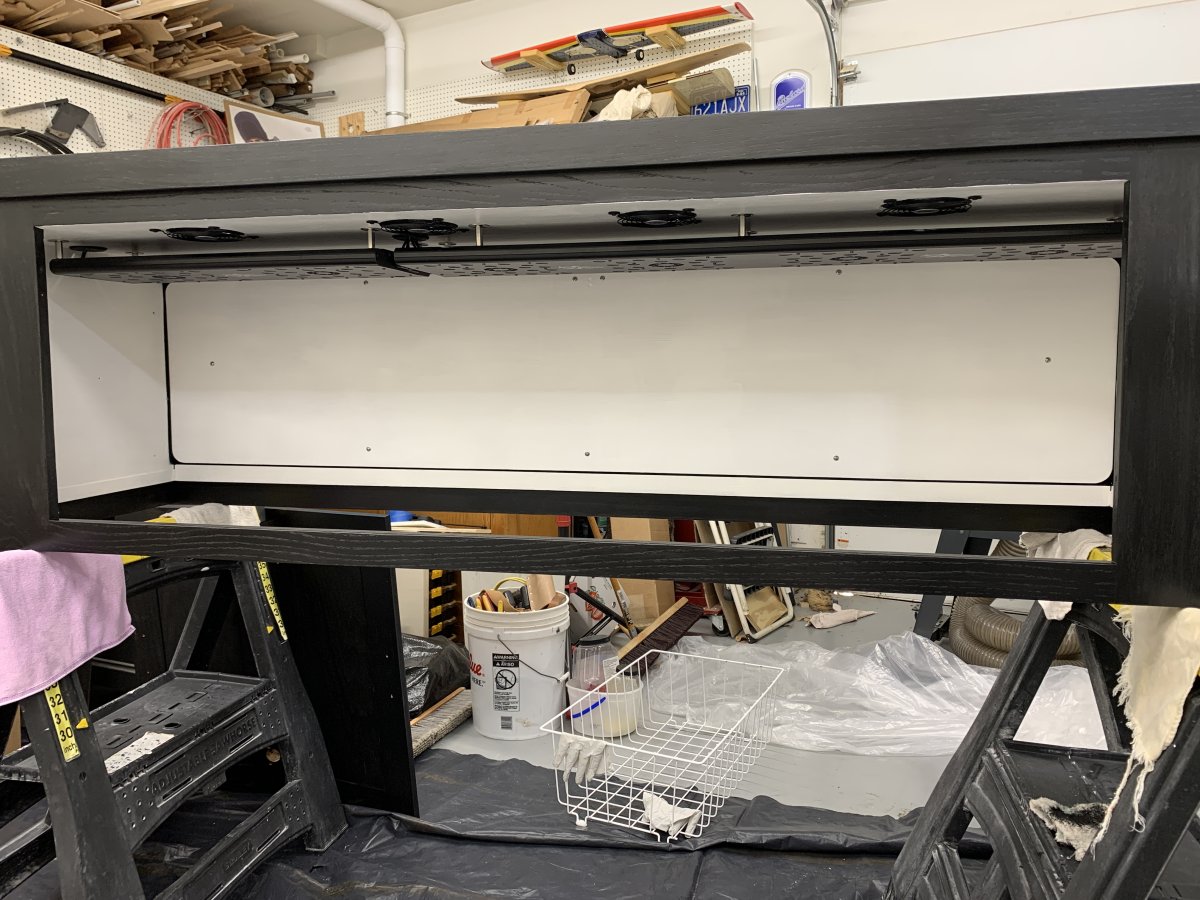 I cut a large hole in the back of the hood (photo below) to allow cooling air in. To avoid light spill-out I installed ¾” standoffs and covered the hole with a larger ¼” ply (seen better in above photo) , allowing full airflow while pretty effectively blocking escaping light. I also painted this ply piece white for light reflection & diffusion. 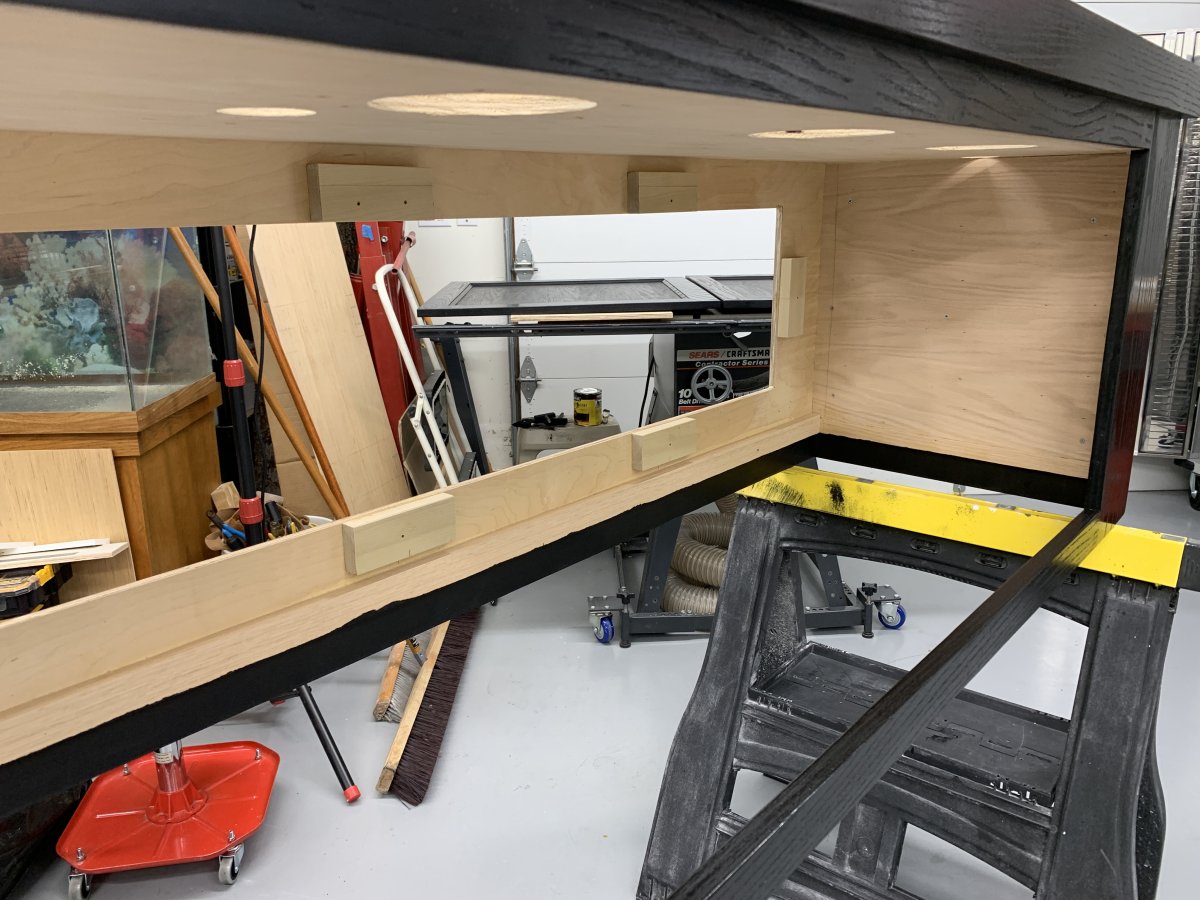 On the hood top I installed 2” tall standoffs for another light baffle to keep light from escaping through the fans and shining on the ceiling. 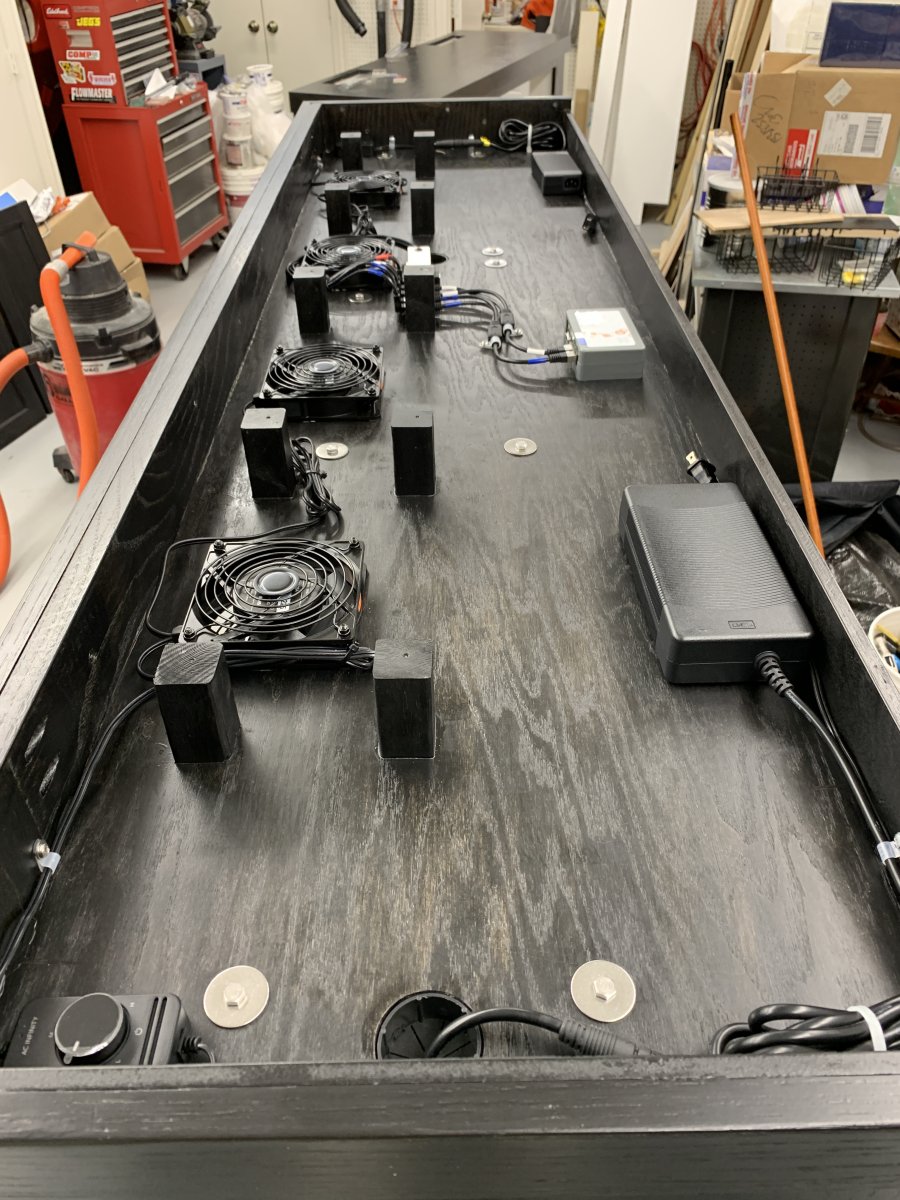 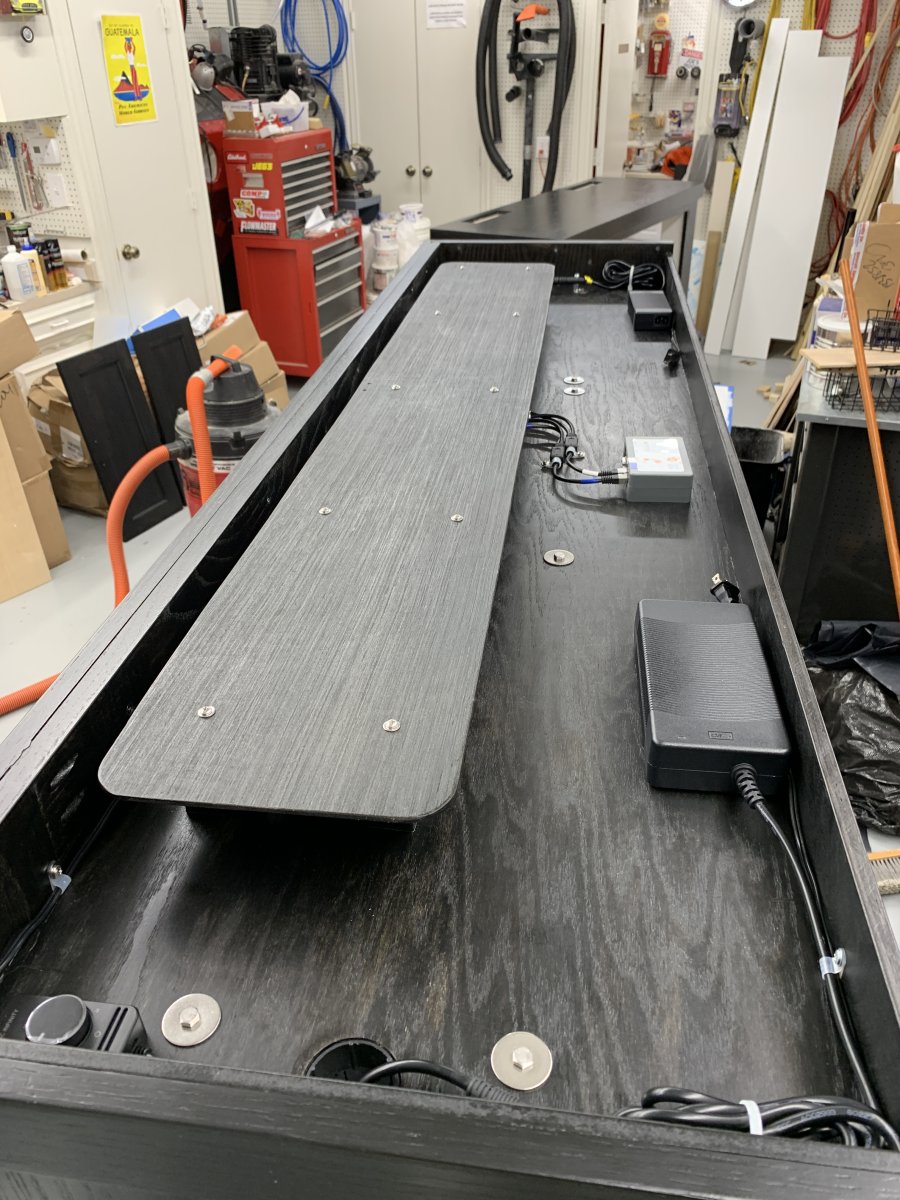 Although not seen in the photos, there are cabinet doors I’ll install after everything else is done and the tank is up & running. I have 2 large doors on the hood front, 2 large doors on the stand front, and smaller doors on the stand sides. The inside of the stand side doors are where I’ll mount the APEX controller & associated equipment. That way everything is out of sight during normal operation, but simply opening a door gives free and easy access to the controller and associated wiring. More on that later.


Below, the stand, tank & hood in place, (with all the mess of getting the plumbing & wiring setup in the stand). Lighting, equipment/accessories, plumbing, and aquascape to follow. 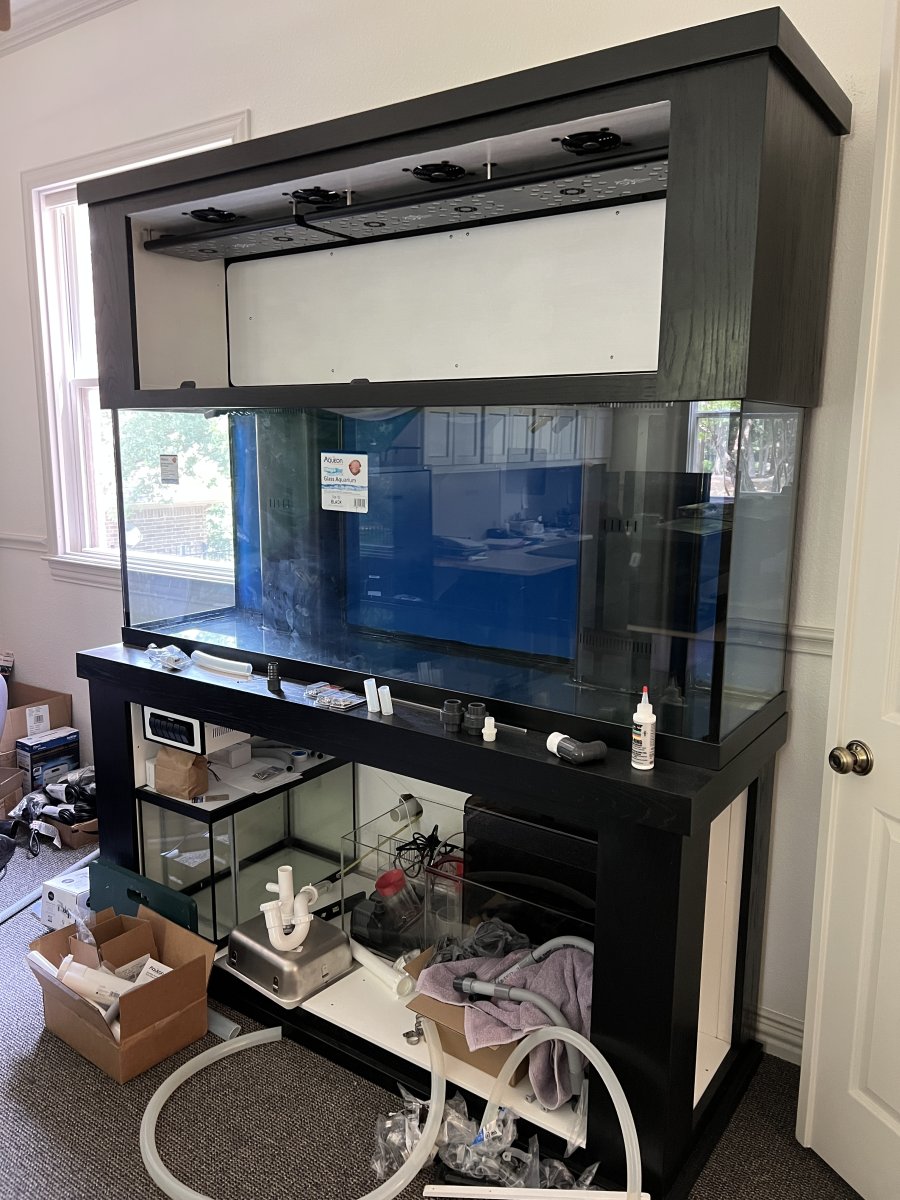 Looks nice! Get a curtain for that window, sunlight can cause some GHA/algae issues at points. I run those lights too. They are pretty good. I don't like the remote aspect for control and upgraded the chips so I could tie it into my apex. Good luck!

Good luck on your build 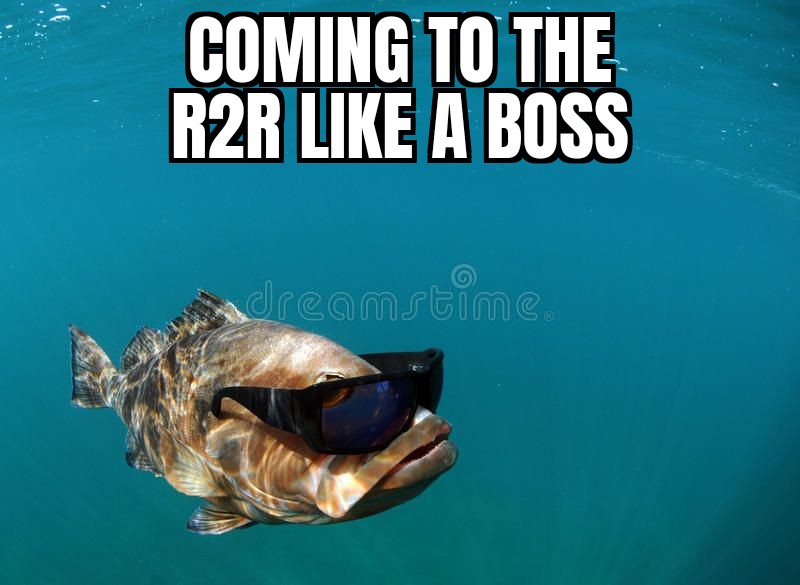 It looks like you already know the ropes- keeping FO tanks for awhile is plenty of experience. Many of the more exotic fish can more challenging than easier types of coral imo. Great start!

Should some type of foam go under the tank to balance weight?
P