Tang eating this brown nuisance, help ID if it's Dino/Cyano or some other Brown hair algae (pictures)

Can anyone help ID this? It's on the back wall and on the rocks. Pretty loose. As you can see on the upper section, my Sailfin Tang is feasting on it. From my understanding, most fish won't eat Dino's or Cyano, so if the Tang is eating it, must be something else? I haven't had a chance to run the "strainer" test yet to see if I can ID it as Dino/Cyano, BUT, I was hoping to rule those out IF Tangs did not typically eat them?

A week ago my Ammonia/Nitrite/Nitrate were 0 and Phospate was about 0.04; I realize Dino's thrive in low nutrient water so I'm hoping that's not it (since the Tang is eating this stuff).

Right now I only have hermit crabs, no snails, urchins, star fish (which I plan to remedy soon!)

Probably should give a quick background on the tank. It was established about 9 months ago by my neighbor. He decided to sell it and I purchased it. It's been in my home for a week. All's going fairly well (except for the algae, although I wouldn't quite call it a bloom). 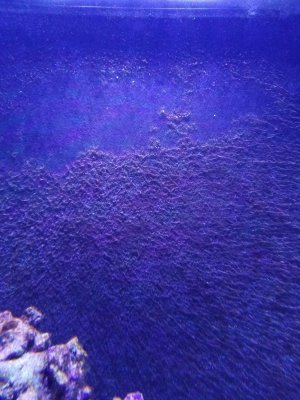 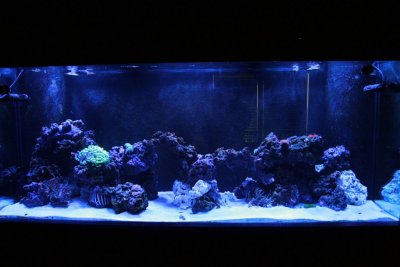 Looks like microalgae to me. I agree that it's not dinos or cyano.

I have a bit of dinos and my scopas tang eats it. I know people will say tangs dont eat dinos but I experienced that they do.

Is this cyano now? (Dino battle)