I am almost half way through with another copper fish 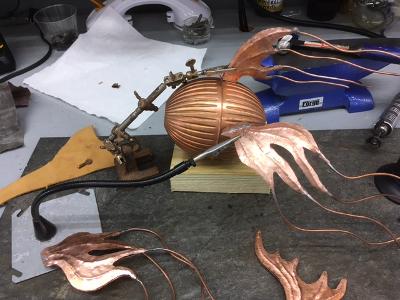 how big of a pump for 10 gallon rugf
OP

The smallest pump you could get. You want a very slow flow, almost nothing in a 10 gallon tank probably 150 gallons an hour or less.
OP

This is at the art Gallery where my "stuff" is being displayed. One of my pieces sold at the showing this week. 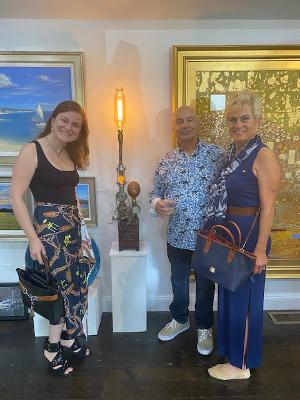 just for a really stupid question...do they still sell copper toilet tank floats or have you been hoarding them?

snorklr said:
just for a really stupid question...do they still sell copper toilet tank floats or have you been hoarding them?
Click to expand...

Maybe they are found in antique shops. Lol

You can sometimes get them on Amazon for $12.00 Most are gone and used to be seven bucks.

I have one more but need to find a dozen somewhere.

Nothing to say except my Grand Daughter also came to the gallery. Then we went to a seaside restaurant for dinner. 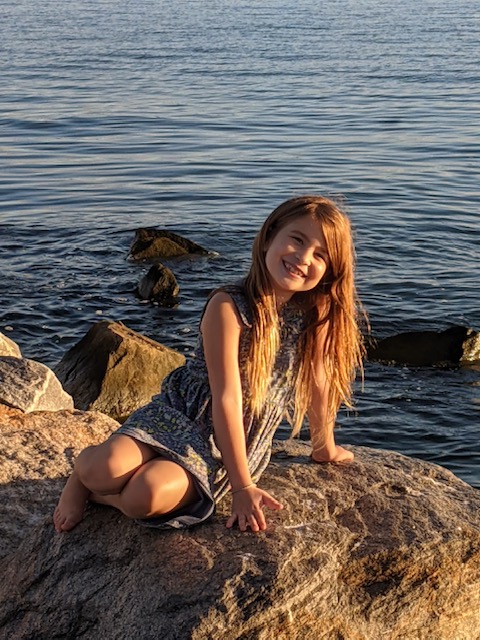 what fish would you get inside a 10 gallon? i am going to get a pump and goop glue and other parts for my ugf and then i am going to get some crushed coral and start building my rocks, i am trying to use as many of the diy projects in your book so i can save my money for high end livestock

NoahLikesFish said:
what fish would you get inside a 10 gallon? i am going to get a pump and goop glue and other parts for my ugf and then i am going to get some crushed coral and start building my rocks, i am trying to use as many of the diy projects in your book so i can save my money for high end livestock
Click to expand...

Look through here and see what are recommended for a 10 gallon.

Paul B said:
Nothing to say except my Grand Daughter also came to the gallery. Then we went to a seaside restaurant for dinner.

Growing up to be a fine young lady Paul.

Paul, I wish we could search this thread! I know you think most reefers have tanks that are too clean and that you say your tank is dirtier and that is good. Can you define dirty? I'm sure you don't bother testing your water all the time but could you venture a guess - at what level are your nitrates?

I am trying to establish enough pods in my tank to support a green mandarin. My tank 180 reef is old and dfn dirty. The 180 reef was made from 2 existing tanks one 20 years old. I added pods 2 weeks ago and am dosing phyto but I think my tank is dirty enough to support the pods. I am at 80 nitrates... most would say toxic but I think my tank looks great and my softies are happy. I don't see pods on my glass or in the sand and that is odd bc in my past tanks the sand at night actually looked like it was moving b/c so much going on. Now I don't see that?

Did Christie Brinkley show up at the art exhibit?

Christie didn't show up. Maybe she got there just after I left.

My nitrates are about 40 but at one time they were 160.
By dirty I don't mean unkempt or that you see dirt anywhere. It means you may have some algae and "mulm" which is the stuff that grows in the back, in caves etc. And is composed of algae, pod shells, bacteria and general stuff that grows in an old tank. You can't see any detritus in my tank but it's there.

Pods need food and food is in detritus. They won't live on clean rocks but any food in the tank will cause an explosion of them.
I am sure you have pods in your tank, it's impossible not to have them. I also never bought a pod and never will, I am not even sure the pods you buy multiply in a tank.

But if you ever bought a coral or live rock, there are pods in there. Take out a small rock and look at it with a magnifying glass. I use a jewelers loupe.

I used to throw some sinking pellets behind the rocks just for the pods.

any negative issues when your nitrates were 160? Your nitrates are 40 now... how often do you do water changes?

My nitrates are high and I think it is because I feed kinda heavy, live clams, live blackworms, and frozen. (and this past winter I stalled on water changes it is much harder in the cold as I need to move the water out the window and to the edge of my property. I have been told using the toilet will kill our septic system)

I am again making baby brine shrimp and ordered white worms to start a culture. I am getting another green mandarin but before I do I want to ensure my tank is pod ready. Do the red scooter blennies and the green mandarins live together happily? OR is it either or between them both. I do like the red scooter blennies... I watched one on your video of your tank. Since I am going to be making BBS and doing your feeding station... maybe I can have both?

All of those dragonettes live well together except if you have 2 males of the same species. Females also fight but not as bad as males. I think they get jealous if one has a better color.

When my nitrates were 160 I couldn't keep SPS at all.
OP

It seems I have some little medical issues. I may have some lesions on my lungs and I need surgery on my spine in my neck.

(I am loaded with asbestos and Agent Orange)

All the years I worked commercial construction destroyed the disks in my spine in my neck and my arm is going numb.
Not a big problem but I am not allowed to lift much until I get it fixed. I am just concerned because my wife can't do much on her own with out me.

Hope all goes well with your health issues. Read your book and loved it. Best wishes and happy birthday to your tank

D
What in my home-brew phyto?

How often do you change your water?
2 3