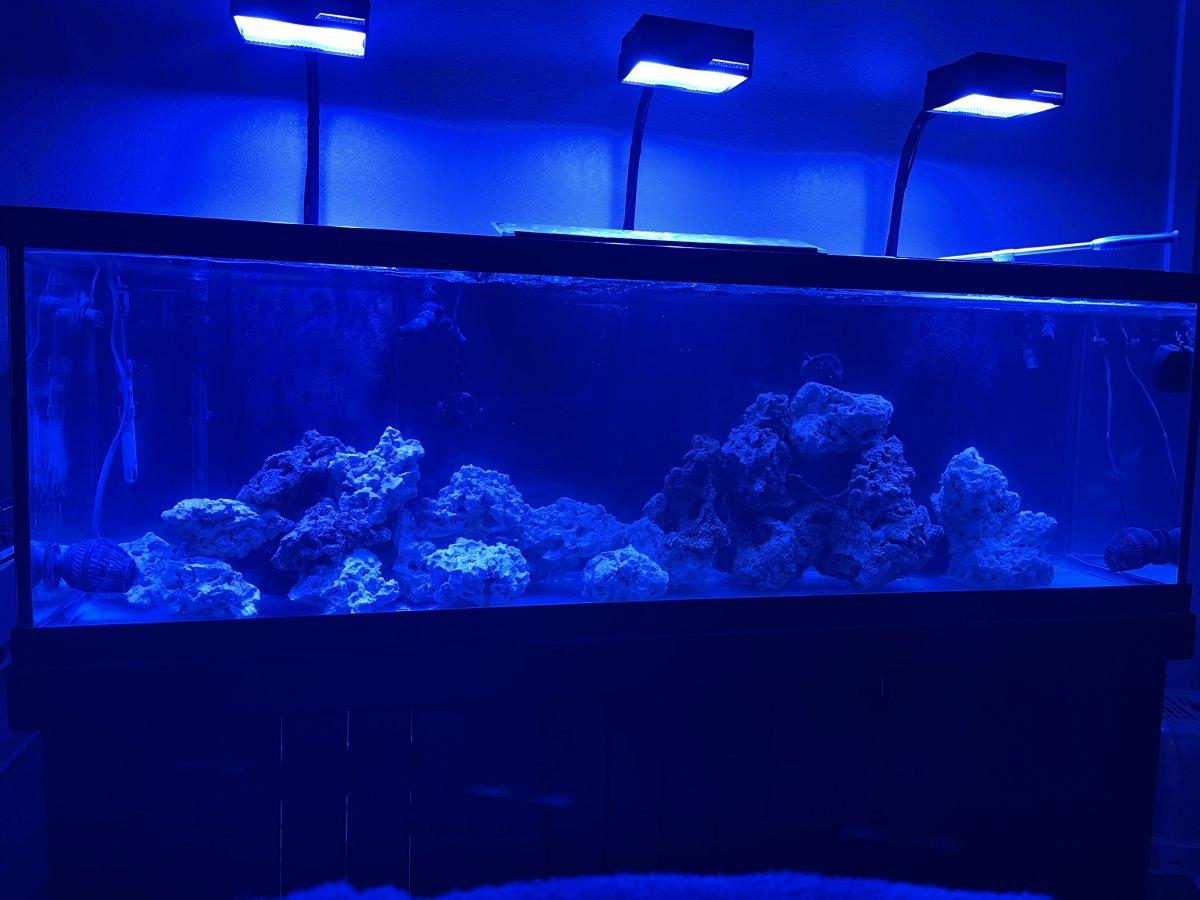 125g tank.
In July of 2021 I converted this tank from freshwater Oscar’s to saltwater. I haven’t had any success since then.

Lost quite a few fish due to aggression in the tank. Lost a couple when my media bag ripped and purigen media made it into the display tank. Lost a few fish when my LFS told me a trigger fish would fit in a community tank. Most recently lost most of my tank to flukes.

I’ve tried adding corals about 4 times over the last 10 months. Not a single one even opened up. No one could figure out why…

3 weeks ago I took out the rock, drained the tank and moved my remaining fish to a QT set up. Put my rocks into a brute trash can with a pump and scrubbed my tank out after draining. I started to clean my sump and noticed that my fittings were blue….and then it hit me. I didn’t replace my brass fittings when I converted the tank over. They had been leaching copper/zinc/nickel into my tank for the entire time.

So this is my restarted tank. Almost a year later. Any of you guys made such a silly mistake?

I've only ever owned saltwater tanks. Glad you figured the possible cause (sorry to hear about all your losses though).
OP
N

Hoping for much more success this go around. Going to go really slow this time. Added two clowns in and will probably sit on them until my coralline finishes growing in.

It’s been a week of pulling copper out of my system. Diatoms are really starting to take hold now. Hoping I can pull the rest of it out and get some corals in at some point.

I’ve been pulling copper out of this tank with cuprisorb in a reactor and poly filter stuck in a sump baffle since May. Added quite a few fish since the tank cycled.

Everyone is doing great so far. Any suggestions for additional stocking? Planning to add a small tang gang as my last additions.

I have successfully removed all the copper from my DT. First corals have been added and are opening up. So exciting!

Awesome it’s turning around!! I would have dumped gas in it and lit a match before taking that much time and money trying to figure it out! So I assume freshwater fish aren’t sensitive to copper and heavy metals like saltwater fish?
OP
N

There’s no electrolysis to break down the brass in fresh water.
Edit: I really only spent about $150 to get the copper out of the tank and I still have half a sheet of polyfilter left.

Derrick0580 said:
Awesome it’s turning around!! I would have dumped gas in it and lit a match before taking that much time and money trying to figure it out! So I assume freshwater fish aren’t sensitive to copper and heavy metals like saltwater fish?
Click to expand...

Thats such a little about nothing would be affected except for some snails.