The easiest and hardest coral to thrive in YOUR saltwater reef aquarium is...

lpsouth1978 said:
Torches are my nemesis!!! I can keep Hammers and frogspawn all day long, they thrive and grow like weeds, but Torches? NOPE!! They all die in short time.
Click to expand...

I took the liberty to interpret "grow" as spreading and growing in #. My discosoma grew from 1/8in hitchhiker to 3 inch without any babies and xenia patch is staying the same size for almost an year in one of my tanks.

Me too! I want my mushrooms to multiply and cover rocks and they just sit there -for years. I just got 2 test acros to see if I can make them happy, so far one is growing (covered a break in 1 week) and the other isn't declining, so I consider that a success. Monti's, Stylo, Birdsnest all thrive.
K

Acros will not grow and die within weeks, elegance coral thrive then gets sickly,

Right now seems like anything will grow, been trying to get into acros, but having a hard time. Been trying to figure out how much the parameters can deviate to still be considered “stable enough for acros.”
D

Hardest: Gonis. They go near my tank and die Easy: Just about any Euphyllia

I have a mixed reef. I can’t grow ricordia. In my current tank, which is over 9 yrs old (maybe 10?). They just wither away, or let go of whatever they r attached to and disappear. other softies, polyps, lps and easier sps do just fine. I should take a pic of the ric in there right now. It’s as big around as a pea when it’s happy, can’t hardly see it when it’s not. I bought it for next to nothing last fall, thinking it had been awhile since I tried a ric. And now I have next to nothing, and I know it’s still not my thing! Weirdness.
D

Hard: some acros, some zoas, Florida ricordia (not yumas) ive never been able to keep a ric for long term.. I over fed my first two then they shrunk and they eventually melted that was years ago when I first tried coral.. recently I got one and I guess I gave it too much flow because it detached itself

Millepora- seemingly hard. Lose 20% of all acros while the other 80% thrive 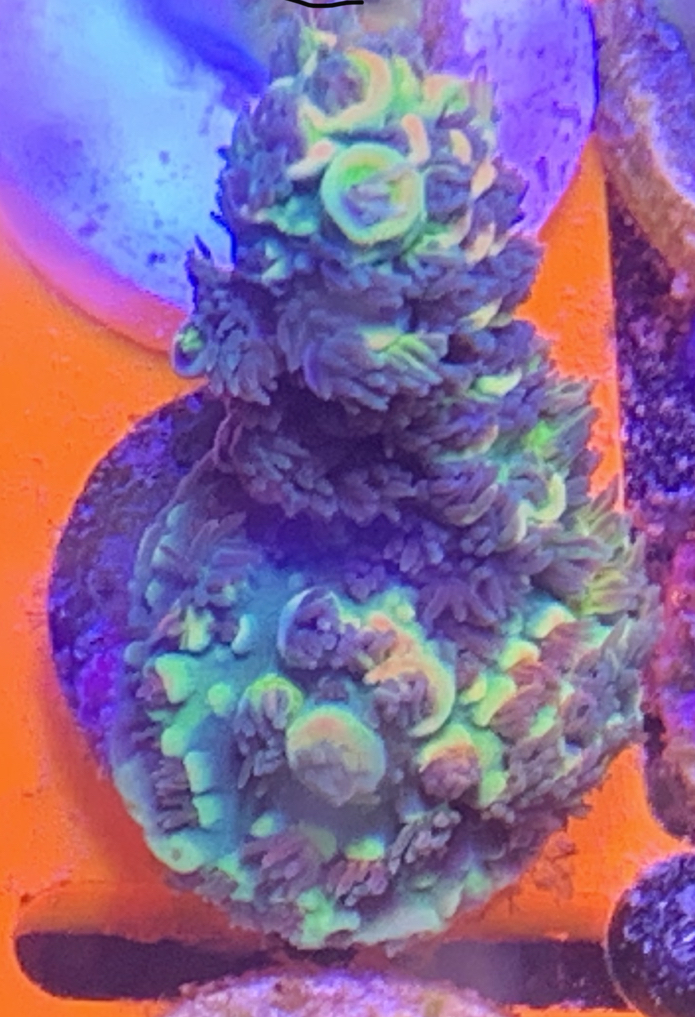 I have one acan lord, and one acan echinata that I've had for about a year and they thrive. Every other acan I've put in has died.

I've killed 2-3 random acropora "canary" frags in the last year. About a month or so ago I overhauled my sump, and the last acropora frag I had went from half dead to rapid recovery. I've since added a purple milli colony which started to thrive immediately and the frag is still noticably better every other day.

Blastomusas love my tank. Enough that I didn't hesitate to drop $200 on a single WWC Trinidad Scorpion head when I visited the Orlando store. I've got blue centers with red edges, blue with orange, green with purple, light green and yellow. The scorpion has taken on more of a solid orange color with purple striations through the body and purple scorpion tail looking bits on top.

I've got a peach branching frogspawn that's happy, and a green/blue walling frogspawn right by it I had to amputate 2/3 of due to brown jelly the other day. I'd had the peach for months before getting the other one.

Montipora spongodes is the one coral in my tank that has thrived no matter the condition. It's actively grown during good conditions, two dino outbreaks and a green hair algae outbreak.

Other montipora look happy, but have grown a lot slower than I thought they would.

Purple stylo does very well. Some people say it's brittle, but trying to cut mine the other day was like trying to cut 8-32 stainless steel bolts. I can lift the 5-6 lb rock it's attached to using it as a handle.

Cyanarina is happy. It's one of the most fun to spot feed. It'd eat a whole frozen mysis cube if I let it.

I've got what I believe is one lobo, and one symphilia that do well.

Larger polyp zoas do well. Smaller polyp zoas do well if I start with a decent sized colony. I've got a fairly large emerald crab with 1/2" long GHA growing on its legs that occasionally leaves it's home inside the purple stylo to "redecorate" and it's favorite thing to move is zoas I haven't had in long enough to see if they like the spot and glue down so they're tough to gauge.

I've had a large feather duster worm for about a year. It has it's moments. It's currently thriving.

I had bad results with cyphastrea early on. The latest two I've added seem to be adjusting as they look nice, but really aren't growing.

My galaxia suddenly went from minding it's own business, staying the same size, and looking pretty, to inch long sweepers randomly, a growth spurt, and looking even prettier.
Last edited: Mar 10, 2021

Can't grow Acros to save my life. My
mushrooms are growing out of control.

Easy: most common acropora, favia, zoas
Used to be hard: all kinds of chalices. Used to lost a lot, but after a year or so, they seem to stable down.
Hard: deep water acro, like red dragon and hawkins enchinata. Lost many frags of them already. Longest one last for like a month. Haven't figured out what's the cause.
T

Historically I can't keep zoas . recently they are doing better.
Easy coral is hammers.
hard for me is any acro.

Seem like I can grow anything, except for LPS CORALS. zoas and palys are weeds, but pretty and useful. The three SPS corals are doing well. Kenya trees are really coming in and one just recently fragged off. Even algea is doing well. Especially the danged bubble algea.

YET, the candy cane (trumpet) dying☠. Hammer, eaten by the CB I think; sneaky devil never did catch him in the act. Torch, broken trying to remove it from frag. Only one I have that I can say has stood up to abuse + stupidity on my end and endured/avoided predation is my goniapora.
A

Keeps getting bigger and drops babies every 3 months.

Easiest- my Duncans and Toadstool Leathers
Difficult- my Orange Tree Gorgonian, been a year and fading lately. Doing our best to have it keep hanging on....
Oh and honorable mention to the fussy Acan's for some reason....
E

I have had trouble with pretty much every coral I have added to my tank except Duncan coral, I am now trying my hand at zoanthids and clove polyps and galaxea

Easiest: Aiptasia, if that doesn't count, then pink and gold paly (Its overtaking my tank)
Hardest: scoly, usually do well and eat and good for 3-6 months, then all starts to recede and flesh melt off. While my acans and chalices are thriving.

QUESTION OF THE DAY Without this fish your saltwater aquarium is not complete..
4 5 6 7 8

What (in your opinion) Is the easiest fish to keep for beginners?
2

When do you give up on a coral?

I LOVE THIS! Your favorite saltwater aquarium or coral reef related photo!