Hi everyone,
I finally have been able to put together a thread for the Hall High Coral Project. I am a marine science teacher in West Hartford. I am in the process of upgrading my current system into a 300 gallon+ coral propagation system. This should be happening in the summer of 2019. Grants are currently being written, fundraisers are happening, and we are planning!
So first, I'll start by posting a full profile of the system now.
The marine science classroom at Hall High School has an aquarium system filled with corals. The system contains 4 tanks that are plumbed together. The system was officially filled with water and started on November 1st, 2016. The frag tank was built one year later. 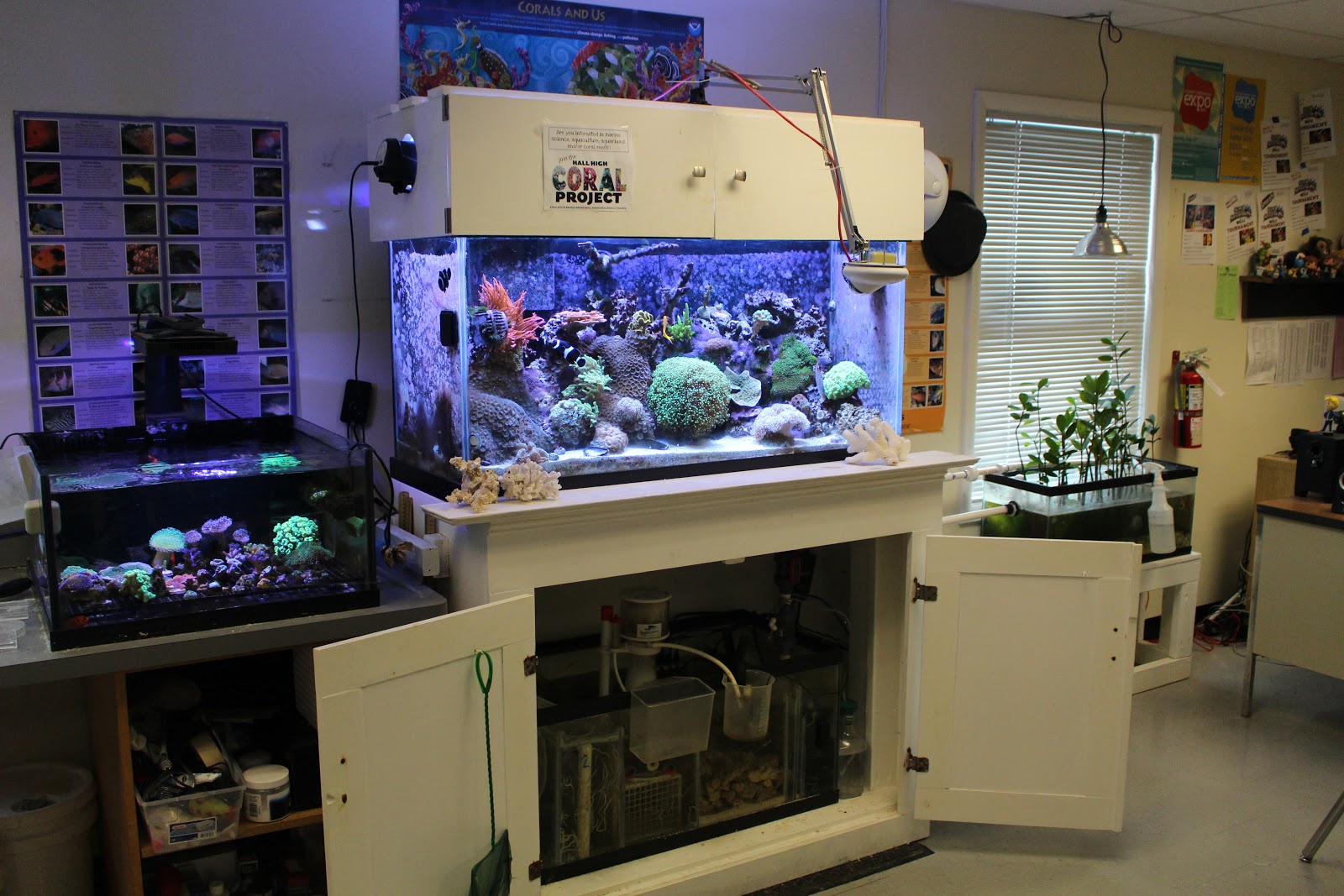 The 90 Gallon Display Tank: This aquarium houses about 20 different species of coral and 7 fish. The tank is drilled in the back for it’s drain and return flow. It’s drain is a 1.5”, return is ¾”.
Lighting: 2 250 Hamilton Metal Halides. 2 48 inch Lumen deep blue LED strips.
Flow: 2 Neptune systems WAV pumps, both run around 50% power.
Biological Filtration: There is a 3 inch sandbed of Caribsea live sand, and about 100 pounds of live rock, the rock was all baserock at its beginning and is now teaming is coraline algae and other life.
Livestock:
Fish- 2 Black Percula Clownfish, Midas Blenny, Bristletooth Kole Tang, Timor Wrasse, Blackcap Dottyback, 2 Sapphire Damselfish 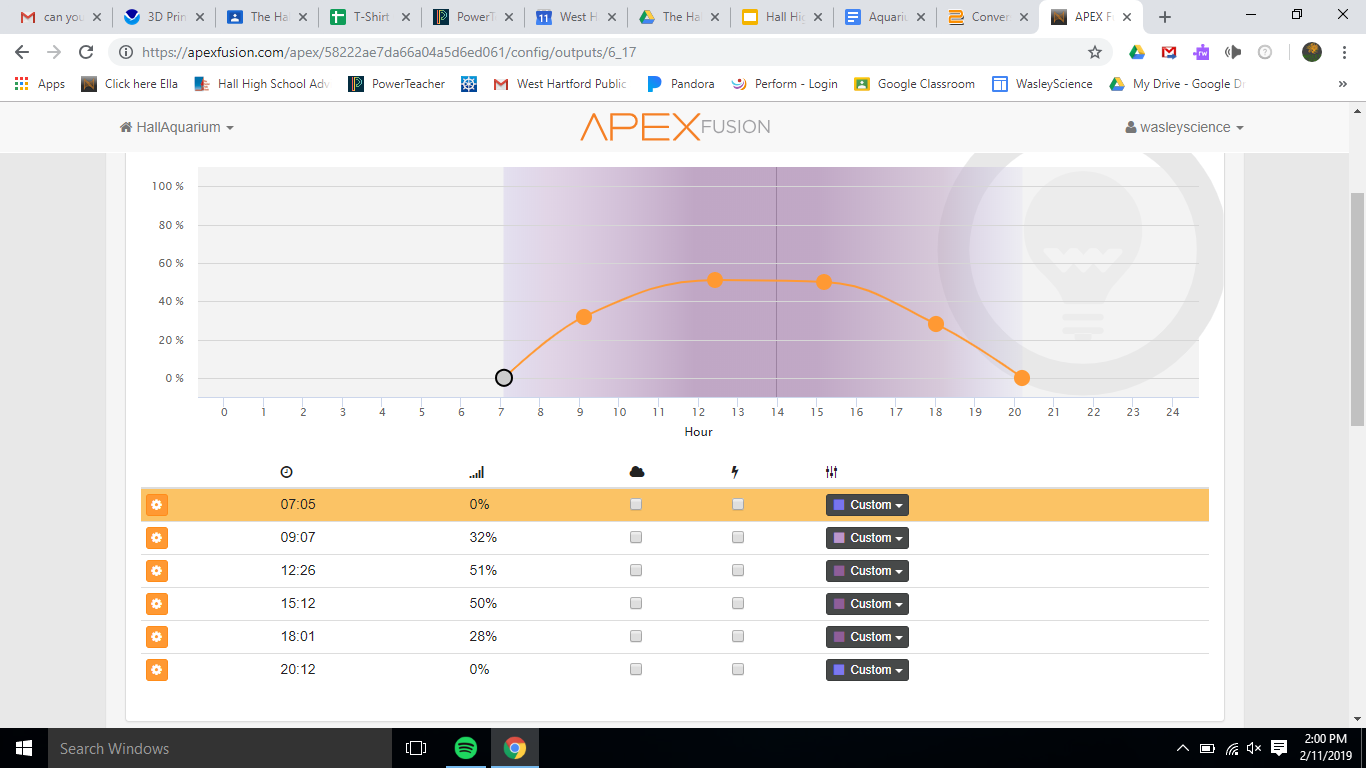 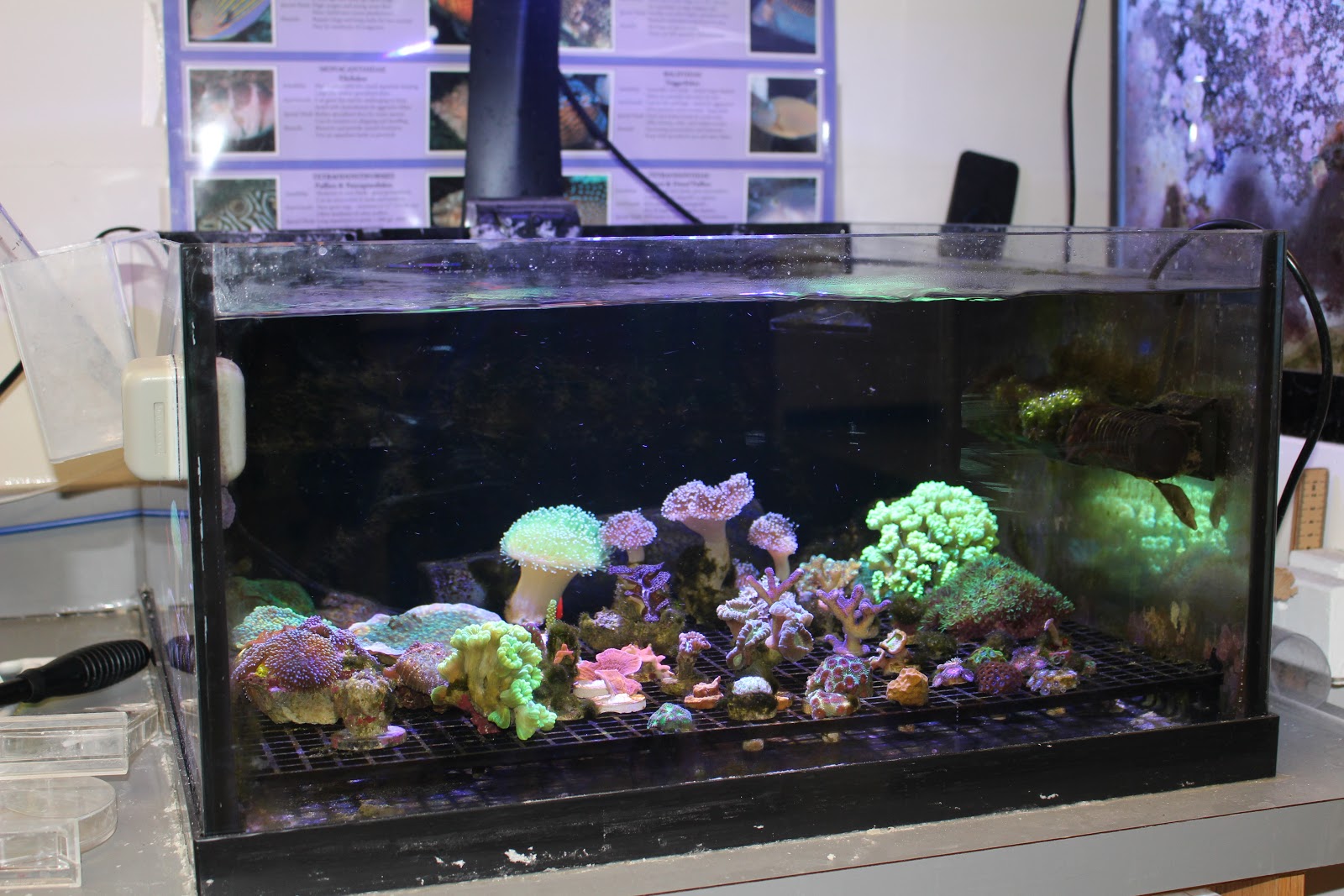 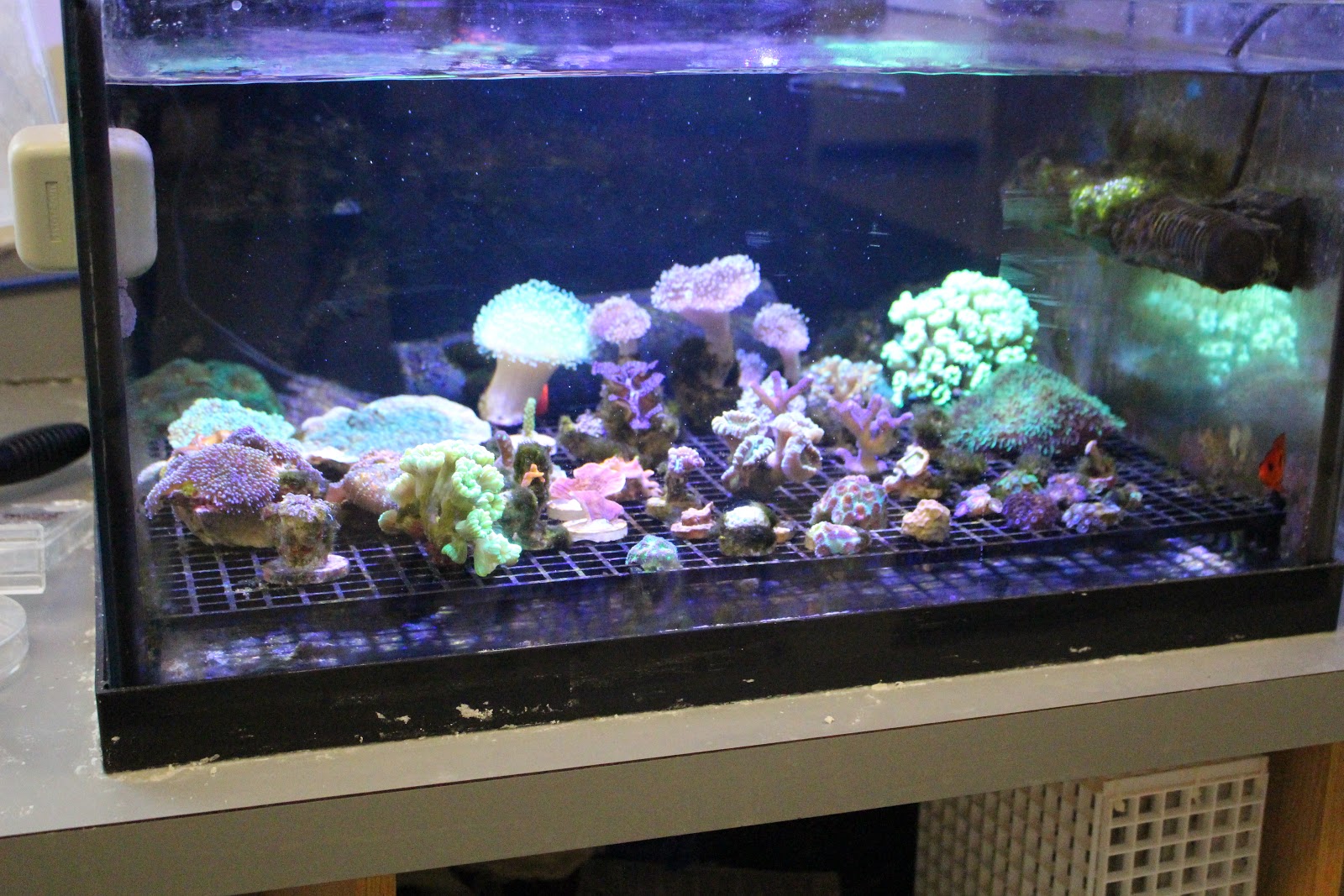 The 20 Gallon Mangrove Tank: The flow in this aquarium is extremely slow, this aquarium acts as the refugium. The tank houses 22 red mangroves, they are currently approaching 30 inches in height. The mangrove roots lay in a deep sandbed of 4-5 inches of Caribsea live sand. The aquarium is filled with chaeto macroalgae, even 2 month months a majority of the algae gets tossed because it grows so fast and is likely absorbed a strong amount of nutrients. The tank lies in front of a window for natural light. However, the window gets very cold in the window so the blinds stay closed a lot of the year. The tank has a LED light above it with lower wavelength spectrum (red color mostly). The light turns on during the light so nutrients are released when they are created the most. 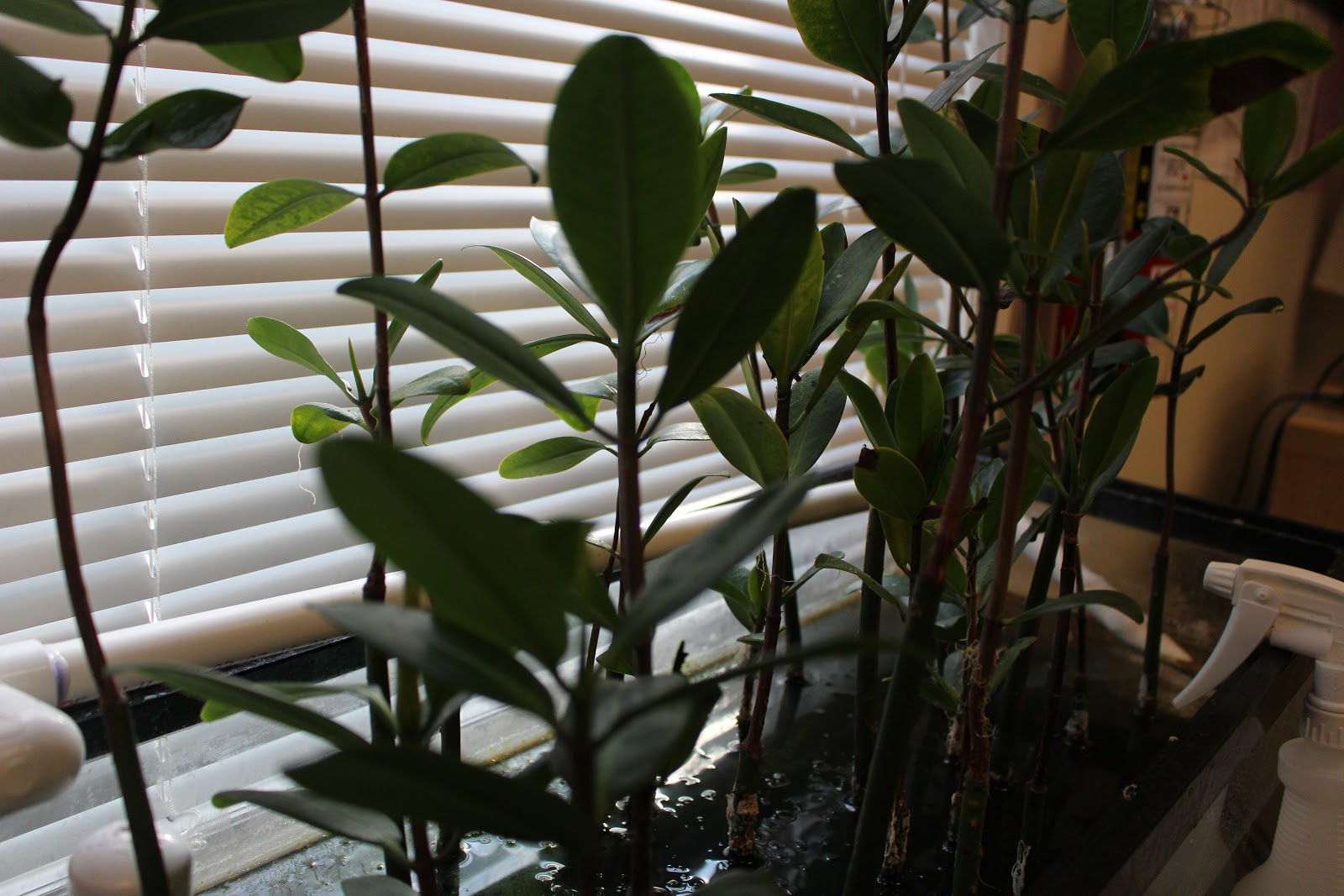 The 40 Gallon Sump: The sump is a 40 gallon breeder tank with 5 stages. The acrylic baffles were cut and siliconed into place. Stage 1 is where the water drains into, we have a large filter sock for the water to enter. Stage 2 contains 3 more filter socks for the water to flow through, when the filter socks are at capacity the water just flows over this stage. We did this so students can easily tell if the filter socks need to be changed. The 3rd stage contains the protein skimmer, a Bubble Magus Curve 5. A float switch connects to the skimmer’s waste container to shut the skimmer off when the waste container is flow. The 4th stage contains rock rubble, a sand bed, Apex probes (temperature, pH, Salinity (never can calibrate it well), and ORP), and a heater. Water travels through a bubble trap and into the final stage which holds a Mag Drive 12 for return to the three different tanks. A float switch is in the return stage for automatic topoff. The Apex DOS also releases Tropic Marin’s Three Part Balling liquids. The system currently receives 25 ml of calcium and 30 ml of alkalinity daily. 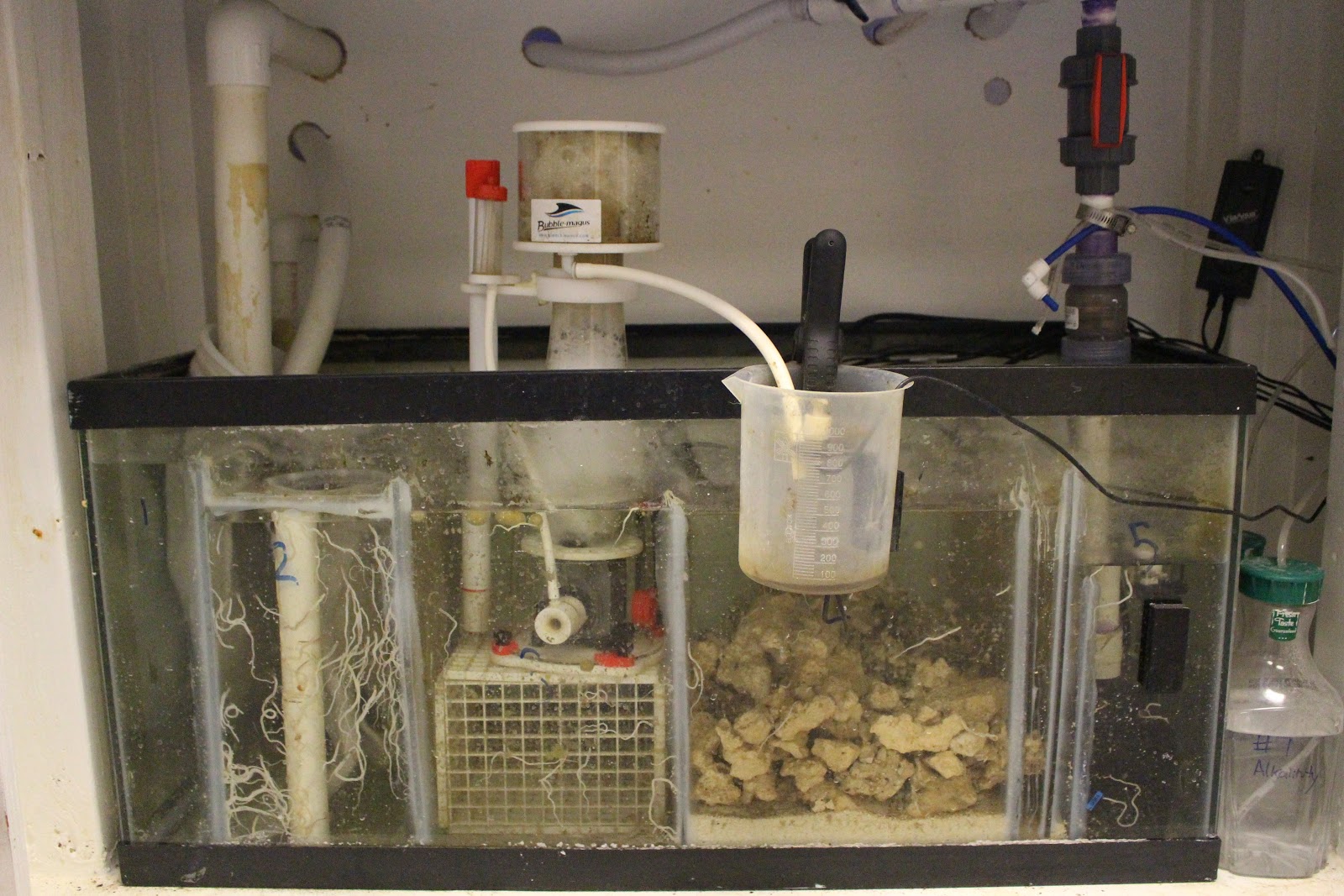 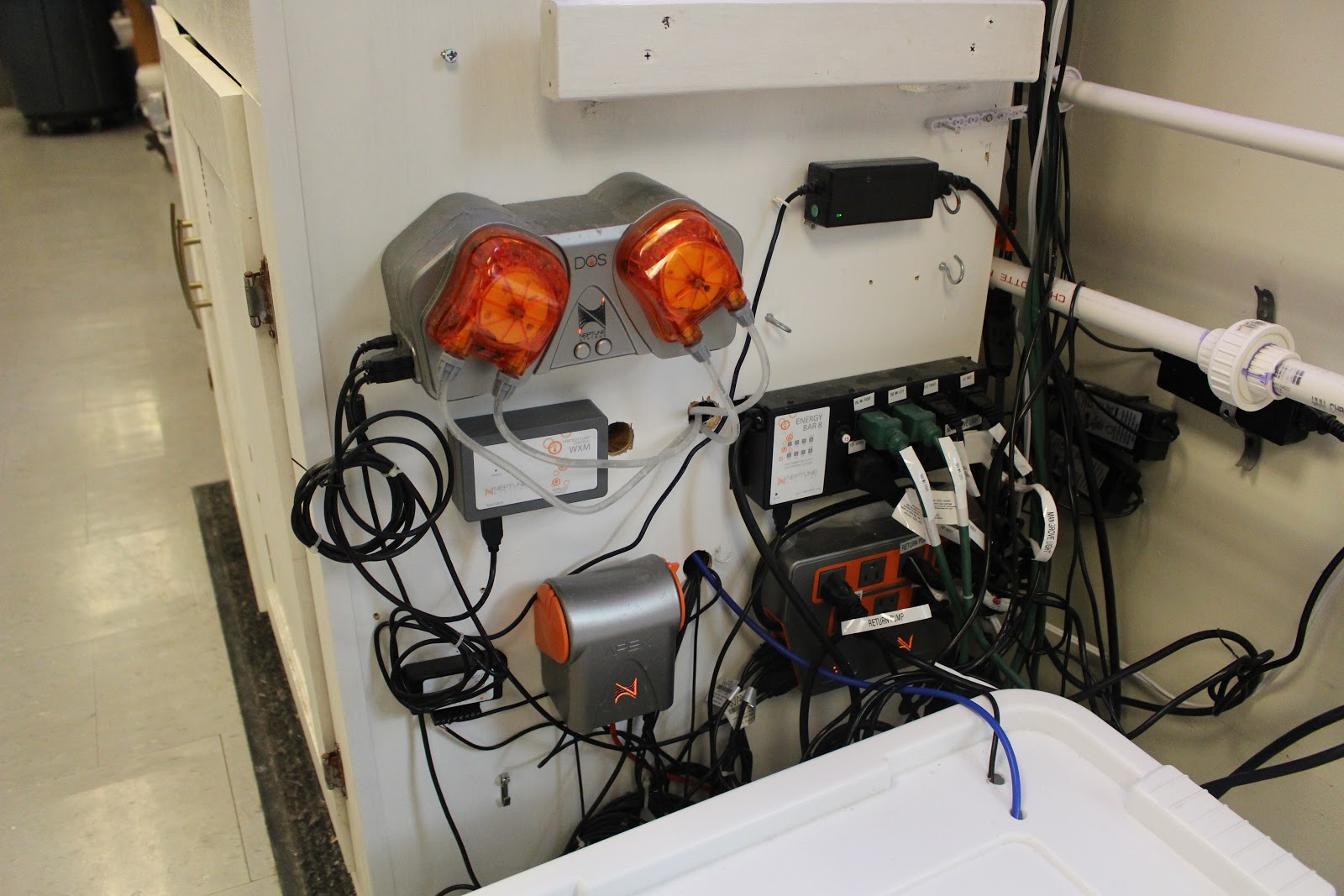 Feel free to follow to be updated with everything going on here. We are in the works of creating a new event for the reef and local community called "Ocean Night." On June 7th, from 6-9pm, we are playing the documentary Chasing Coral in our auditorium and running several coral reef activities from an art gallery by the students in West Hartford, Virtual Reality of coral reefs, kid activities that explore coral bleaching, and more!
Thank you!
- Waz 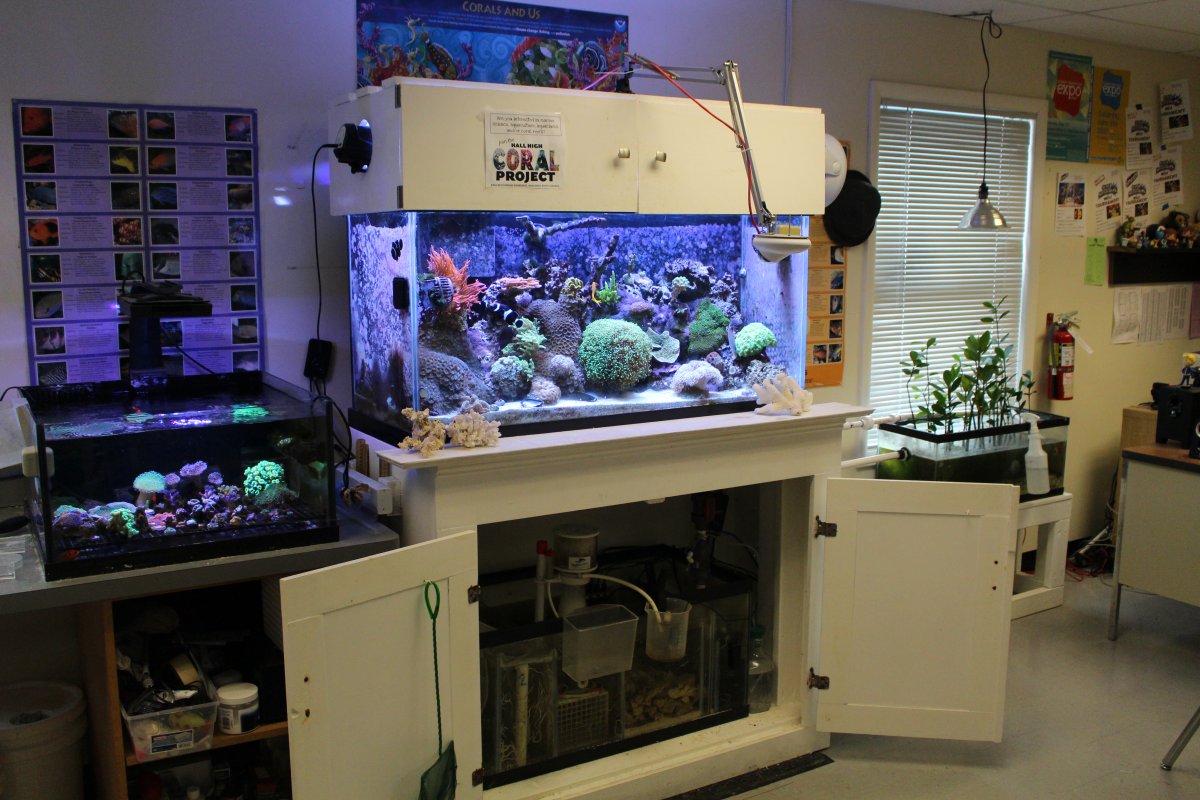 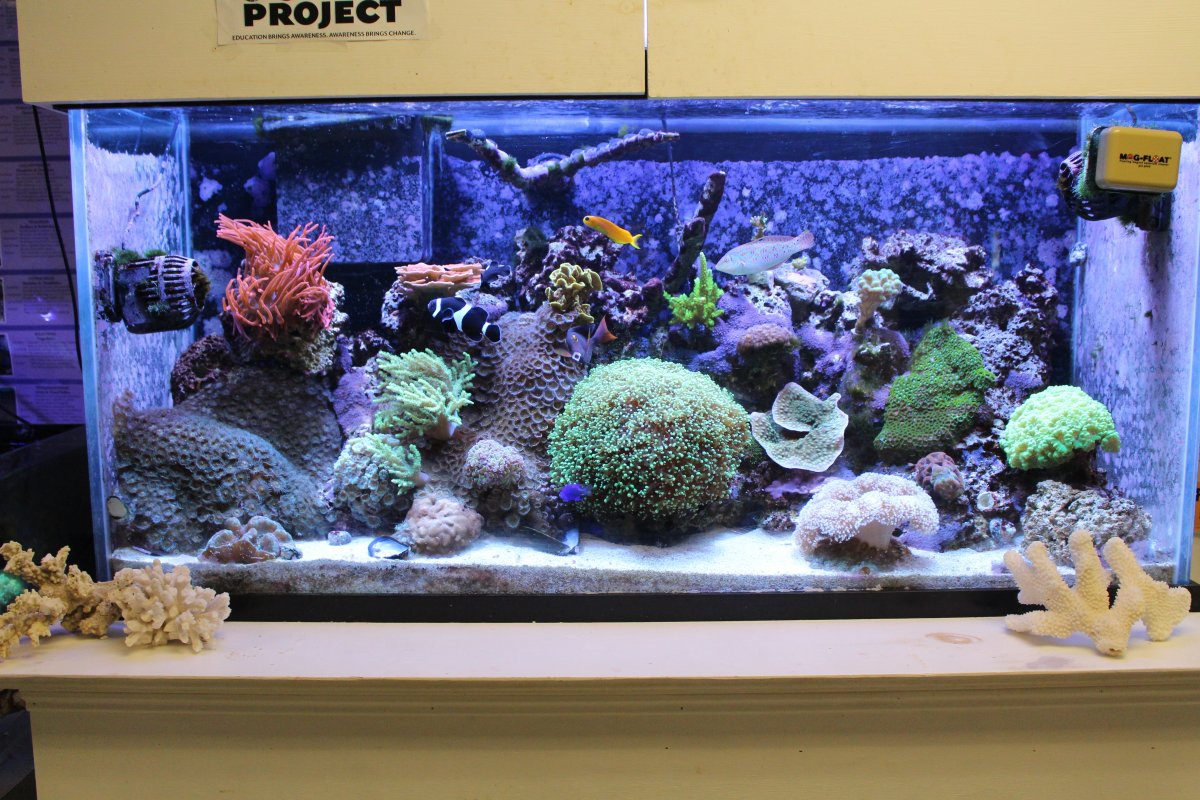 Let me know if anybody has questions! Stay tuned for updates over the year. Follow along if you would like to help this summer with designing and building the system?

Nice. Get them interest in the hobby and ocean. Nothing better.

This is just fantastic! Wish we had something like that when I was in school.. following along

The tanks look terrific!! I even see my nuclear green nephthea in there! Sadly, mine died off
L

The tanks look great, and I even see my nuclear green nephthea in there!
W

Waz said:
Let me know if anybody has questions! Stay tuned for updates over the year. Follow along if you would like to help this summer with designing and building the system?
Click to expand...

I just sent you a personal message!
OP

LeslieP said:
The tanks look terrific!! I even see my nuclear green nephthea in there! Sadly, mine died off
Click to expand...

You coming to FFM? Find me! I'll cut a piece for you. It's the least I could do!
L

Waz said:
You coming to FFM? Find me! I'll cut a piece for you. It's the least I could do!
Click to expand...

That's so kind of you - but I'm going to hold off until I can get my tank back in order. I've let it get away from me and I need some help and some time to get it back.

Very nice....
My wife is a Hall High alumni. I'll have to show her this thread. I'd like to put together some type of proposal and talk with some of the teachers in Simsbury and see if they are interested in doing something.

Glad to see the progress on this tank and program. Awesome work.

This thread has been stickied to the top!

I have nightmares of jumping fish

Great post, how on earth did I miss this earlier???
OP

Hi everyone! I have an update on everything!

I will be building a 300ish gallon coral propagation system this summer. I would love some help with plumbing experts and if anybody would like to help with building stands. I also will be moving my current system to a new classroom because I'm moving classrooms for next year. My current system is going to be in my room as a "display" or "piece of the reef" for the students to use to understand animal interactions in a reef and be used when needed in the class. Across the hall is going to be the 300ish gallon coral farm.
The plan is to get 4 50 gallon low boy tanks plumbed together with 2" bulkheads as a raceway style. My sump will be 2 100 gallon rubbermaid tubs with liverock, skimmer, etc. I will also be setting up an additional low boy tank for a mangrove/chaeto fuge.

What would be great is to start building stands and preparing to move the other aquarium as early as the week of June 24-28. I would love help from people that are pros at this. This system is my largest system I've ever built myself and it's a little overwhelming. Would anybody be available to come to the school with assist with plumbing and stand building?

Okay. So I've been doing a lot of planning this week. Here's what I got going on.
I have made my Neptune Systems list.

I already have a lot of Neptune stuff with my current system so these are the additional things I'm purchasing. BOTH of my aquarium systems will be fully capable of being run anywhere.

Next, I decided I want to purchase Gladiator steel stands for my 5 50 gallon low boys. This will save me a lot of time. I'm curious what you all think. These are the shelves I plan to get:
https://www.lowes.com/pd/Gladiator-EZ-Connect-72-in-H-x-48-in-W-x-24-in-D-5-Tier-Steel-NSF-Certified-Freestanding-Shelving-Unit/1000197487
Here's what my layout looks from the side (sump system isn't included in this image).

They are 42 inches high because the room they are going in has windows that high. So students will be able to see the corals growing as they walk by in the halls. Pretty cool right?

Here's my system looking from above.

I am currently unsure if I really need two Rubbermaid 100 gallon tubs for my sump or can get away with one. This is the system with two of them. I plan to have about 200 lbs of live rock in the system. The mangrove refugium is also a low boy so kids can see the root systems growing.

I'd love some feedback because this is a lot of decision making and money invested so I want to get this right.
Thanks!
- Waz

I went with two tubs on sump. Supplies are starting to come in. Garage is full of tanks and equipment. Would any good plumbers be interested in helping me plumb this system? I would be very grateful. I am planning to be working on the system at Hall High School on the following days: 7/26, 7/29, 7/30, and 7/31. Newbies that want to learn more are also invited! Thanks so much everybody! - Waz

What ONE showstopper, healthy, hearty coral/anemone would you get for this tank?
2

Purple Tang in Sump for how long