The OFFICIAL how I beat Hair Algae thread! How did you do it?

Wow this q takes me back!

The very first tank I set up was a 10g. I didn't know anything about RO/DI and was using tap water with an additive.

Hair algae galore. I had a inch think carpet on every surface of the tank. I learned about RO/DI and water changes. Did that and stopped overfeeding. Seemingly no changes. After a couple months of better husbandry I scraped it off the glass, scrubbed off the rocks, vacuumed off the sandbed AND it never grew back as I got rid of the food source. I also added a size appropriate cuc.

Fix the source problem and you will fix GHA. Time and patience, no additives needed. 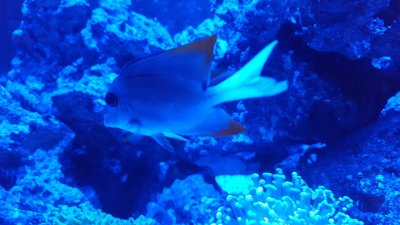 Marc2952 said:
Right now hair algae will be a blessing to me since im dealing with dinos instead
Click to expand...

I hear you, I have battled Dino’s for a year. I finally did Dr. Tim’s process X 2. It’s been about 4 weeks and it seems to have knocked out the Dino’s. Now I am seeing tiny outbreaks of hair algae on the rocks. I am trying to stay on top of it. I had virtually no nitrates so I have been adding nitrates and phosphates. I am now up to NO3-8ppm and Phosphates- .35 I’d like to see the phosphates come down a bit and the nitrates hold steady. I am still adding bacteria weekly. I am hoping the hair algae stays at bay.

Everything kept growing out of control. I overcame the problem with a few solutions simultaneously.

1) Removing all algae I could manually from cycling to now (1 year and 1 month). This helped to an extent but it always came back.
2) Weekly 25% water changes for a year. I vacuumed the sand bed every time and it helped for a few days. Water changes are now 25% every two weeks.
3) Changed light spectrum to mostly blue. I originally had a lot more red and green.
4) The real improvement started when I got a skimmer. Noticed a change after about 3 months.
5) Finally kicked the algae using a bacteria supplement to compete with the algae and the skimmer then removed bacteria from the water column. This was about as major improvement as getting the skimmer but took over 3 months to finish it off.

Everything I did, manual removal, scrubbing rocks, removing rocks and spraying with 3% peroxide, direct spot application of 12% (the corals hated this), adding a UV, and lowering NO3 and PO4, just beat it back temporarily.
I finally nuked it twice with Flux Rx and keep it in check with Vibrant. The only downside is I can't get Chaeto to grow anymore even after using Chaeto Grow.

I had a big GHA problem a few months ago. I diminished my white lights from 10 hours/day to 7; bought a sea urchin and five emerald crabs. That took care of the bubble and green hair algae on the rocks but not in the sand. For that, I bought 30 Cerith snails. I also pulled the algae off the rocks by hand during my 2 week water changes. Now it is pretty much under control. I have a little bit of GHA but it is disappearing and the bubble algae is gone. However, I now have a big outbreak of cyan. I'm thinking of using chem clean if I can't get rid of it soon. That or an electric sand vacuum. Any suggestions?

Had GAH growing heavily on the back glass. My CUC and fish kept the rocks clean. So i decided to let it grow till it got about 3" to 4" long.
I then took fish net and scraped as much as I could. Then the CUC and fish cleaned the rest off. Haven't had any come back. I don't have to clean the glass but once a week.

My blenny, tomini, and convict tank do not touch it.
My sea hare is the lawnmower in my tank.

I find the fascinating animals to look at 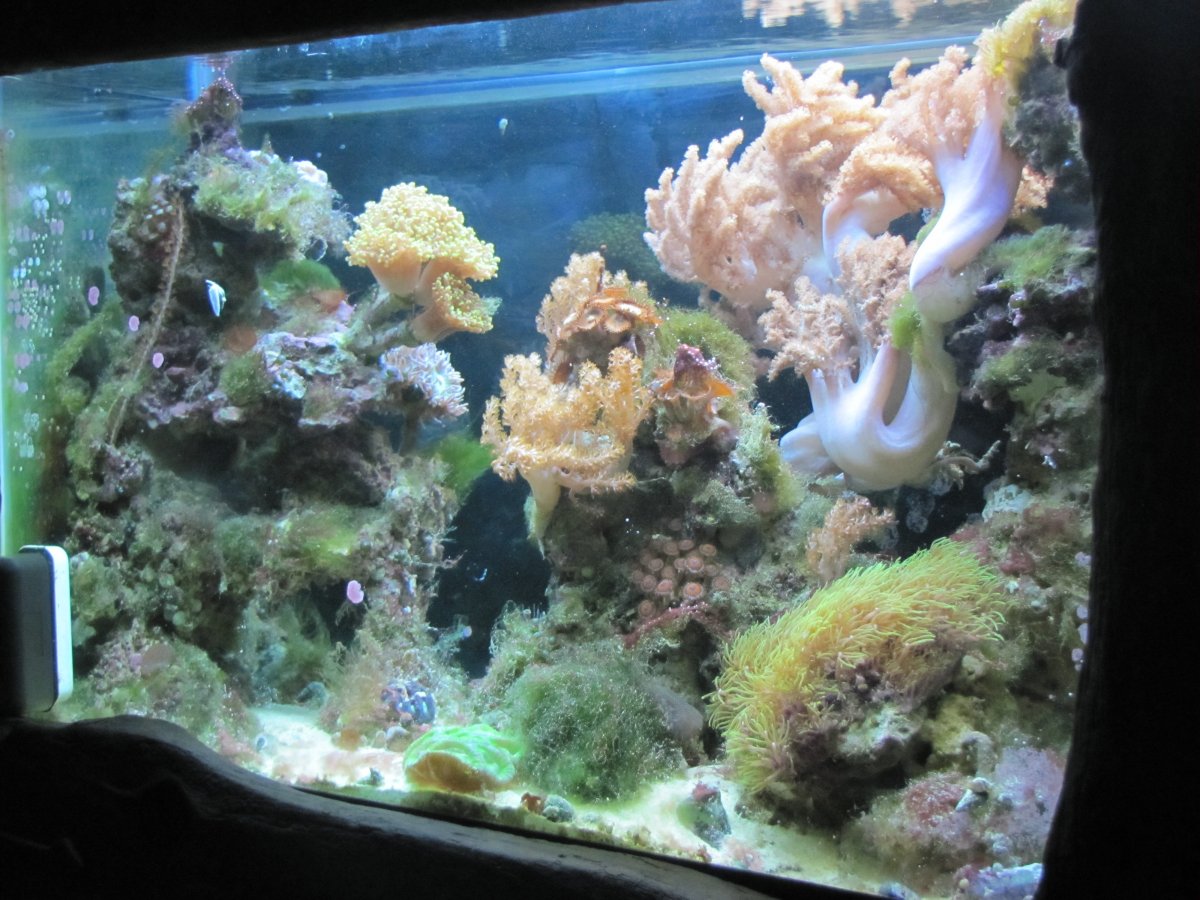 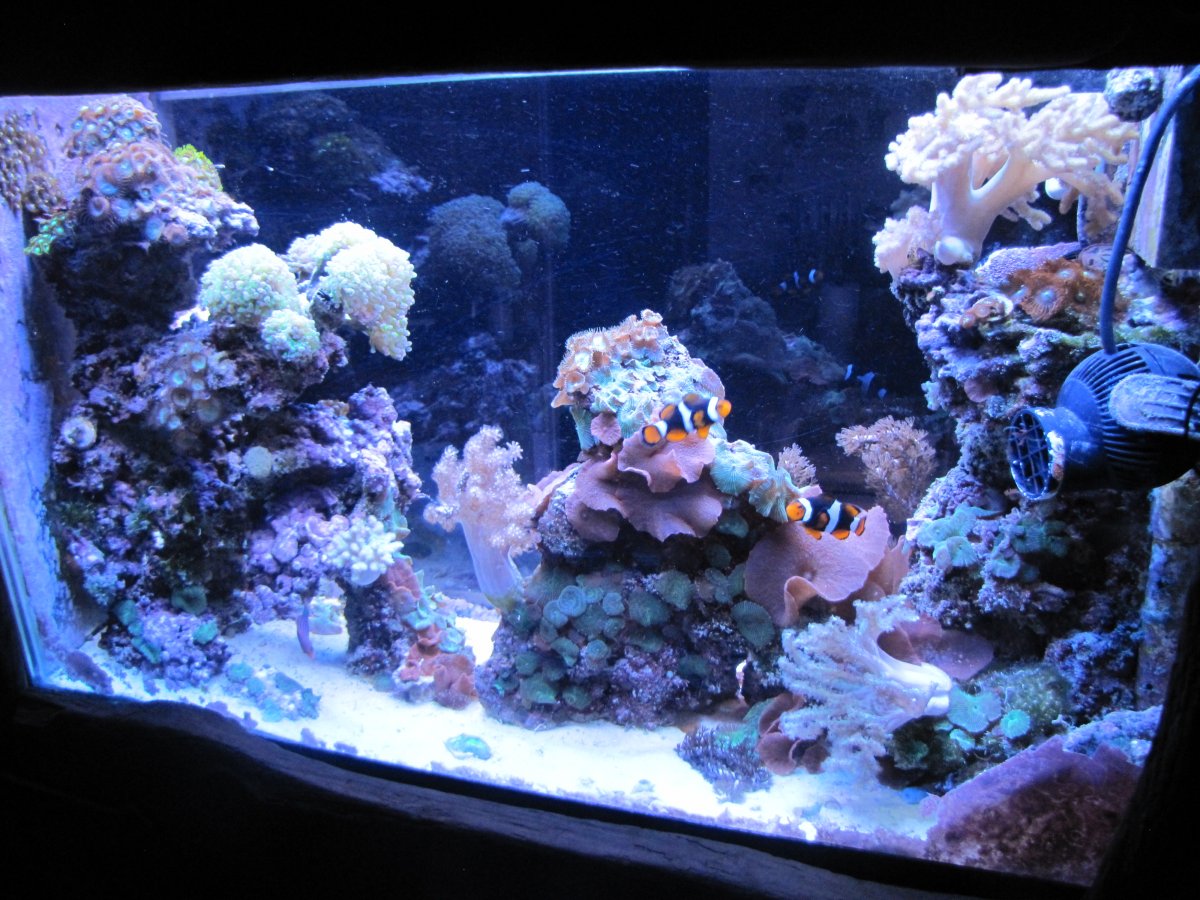 My current tank has gone through changes over the years, too many to really pinpoint the cause. It is a mix of mature rock (20 years old) and marco rock and sand (10 years old) with less than routine WC's. On occasion it has had a couple of different remote sandbed/refugiums...currently the only sand in the tank is what you see, maybe 1/2 inch to 1 inch.

In 2010 I was getting 1 ppm phosphate readings (Salifert). I didn't really do much for other testing at the time but notice I was using phosphate sponge on occasion. I wasn't diligent with WC and might get one 15% WC per month and that was usually to siphon out algae.

At some point after the first picture was taken, the fall 2012, hard corals were dying....weed corals like brown palys, nepthia, colt and mushrooms still live to this day.

I kept pulling GHA and trying to keep up on WC's, the tank would look great for about on month and the GHA would come back.

I got back into working on this tank in March 2017 when I added a tiny hammer frag (pic in my profile), which proceeded to do well. I continued with the routine WC's.

I added a small ball of chaeto in my sump with a cheap grow light and both the nitrates and phosphates started to drop. A year ago my phosphates were 0.5 ppm and nitrates were 10ppm. Now they have both bottomed out and I have started to feed a little heavier. My spectrum is a littler more blue than the 2012 tank which was more a mix of 6500K and 10,000K PC bulbs.

I also make sure to have the right algae eaters for the job in my tank, astreas, trochus and Mexican turbos. A lettuce nudi did a good number on the GHA as well.

I had a little relapse last fall which I attributed to exhausted RO/DI filters. I still have some algae in my tank but not a coral choking amount. I also added more flow to my tank which seemed to help.

Randy Shapiro said:
What I dont understand is my nutrients bottomed out. I now have dinos and GHA. Have been overfeeding like crazy to try and get nutrients up but nothing is working. Cant do water changes either because that fuels the dinos. Any and all help is appreciated. I got corals that arent opening because of no nutrients. Skimmer is off, chaeto is kind of dying. Only running some carbon and been dosing Vibrant just a little once a week.
Click to expand...

Have you tried to dose live phytoplankton? That should help you outcompete the dinos wile increasing po4 naturally

Fluconazole - single dose like mic drop’d on both GHA and briopsis.

1. Pulled as much briopsis manually as I could before dosing.
2. Followed dosing recommendation for 75 gallons in my RSR350
3. No skimmer collection cup for 1 week but still running
4. Pulled carbon also.
5. Only running single filter sock with refugium and briopsis 100% gone, GHA 90%.

GHA was a bonus since I was focused on briopsis. 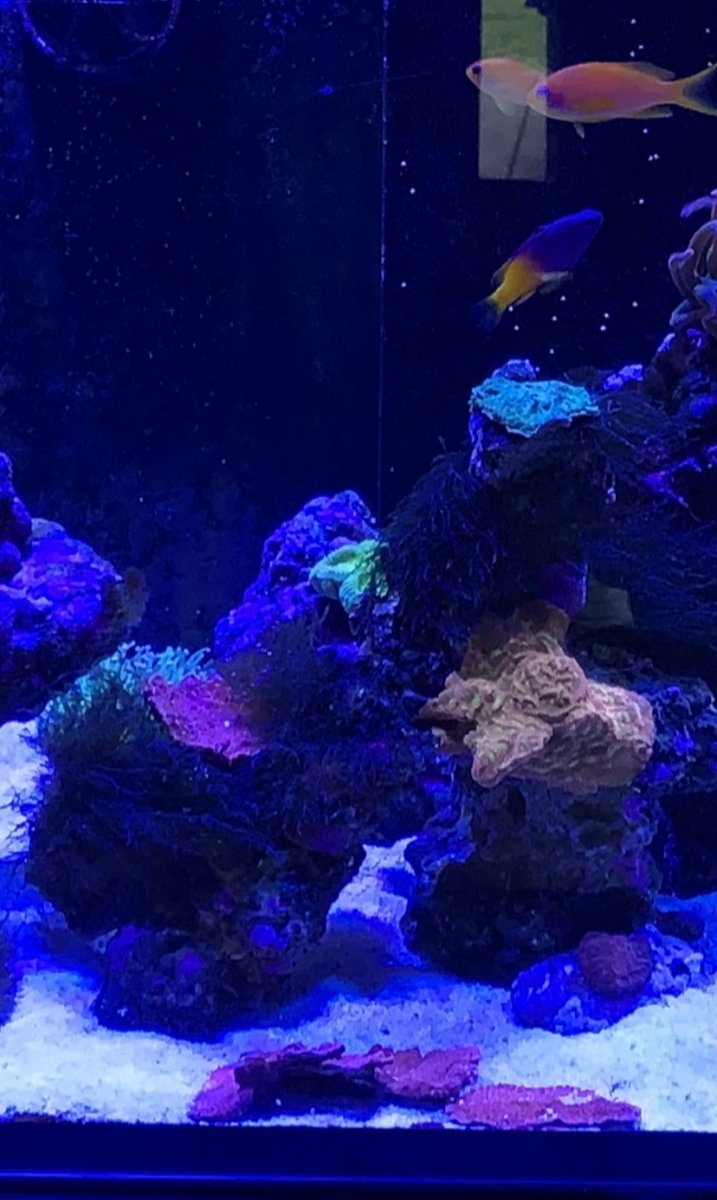 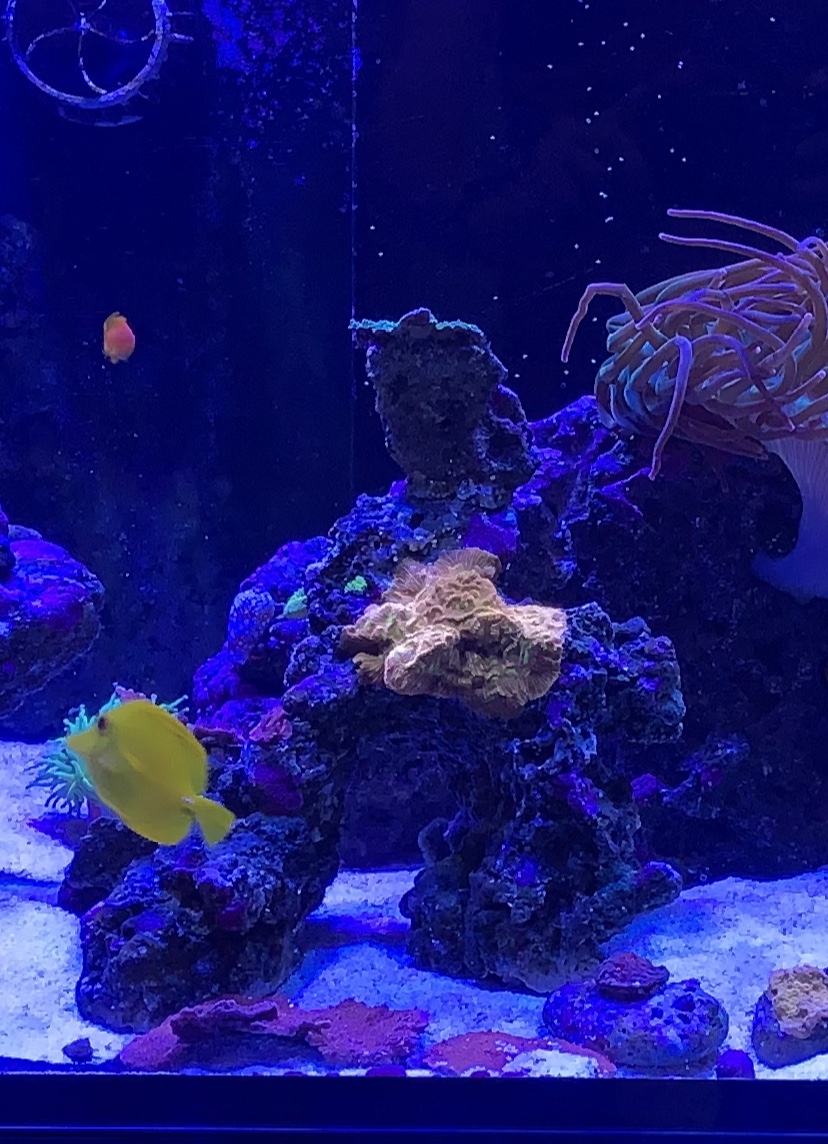 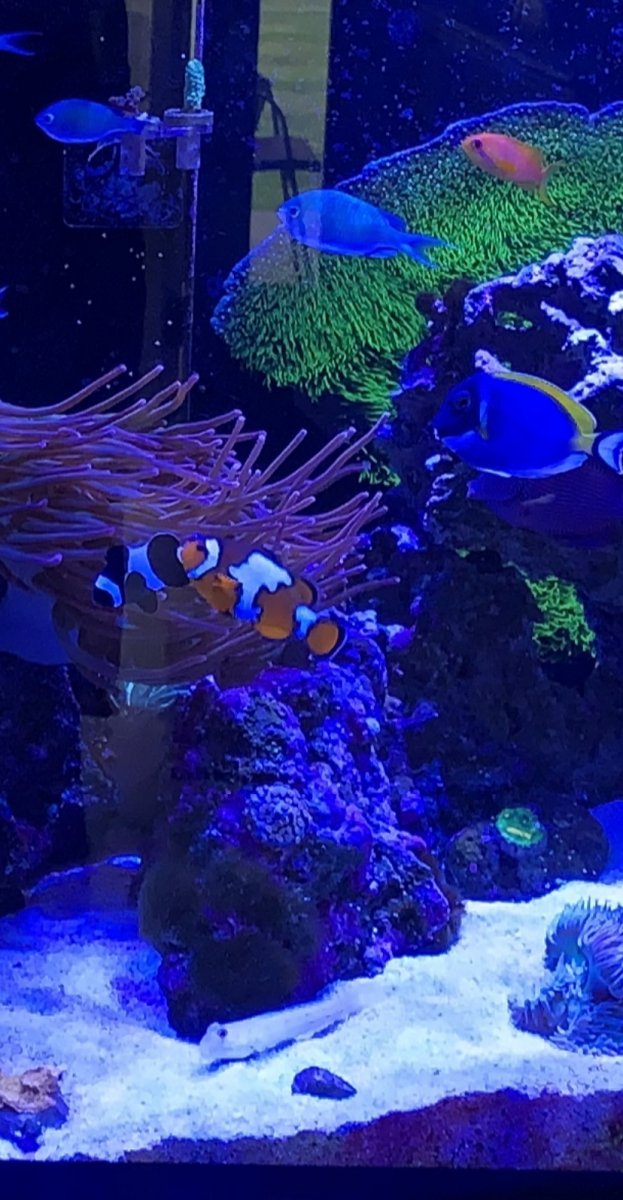 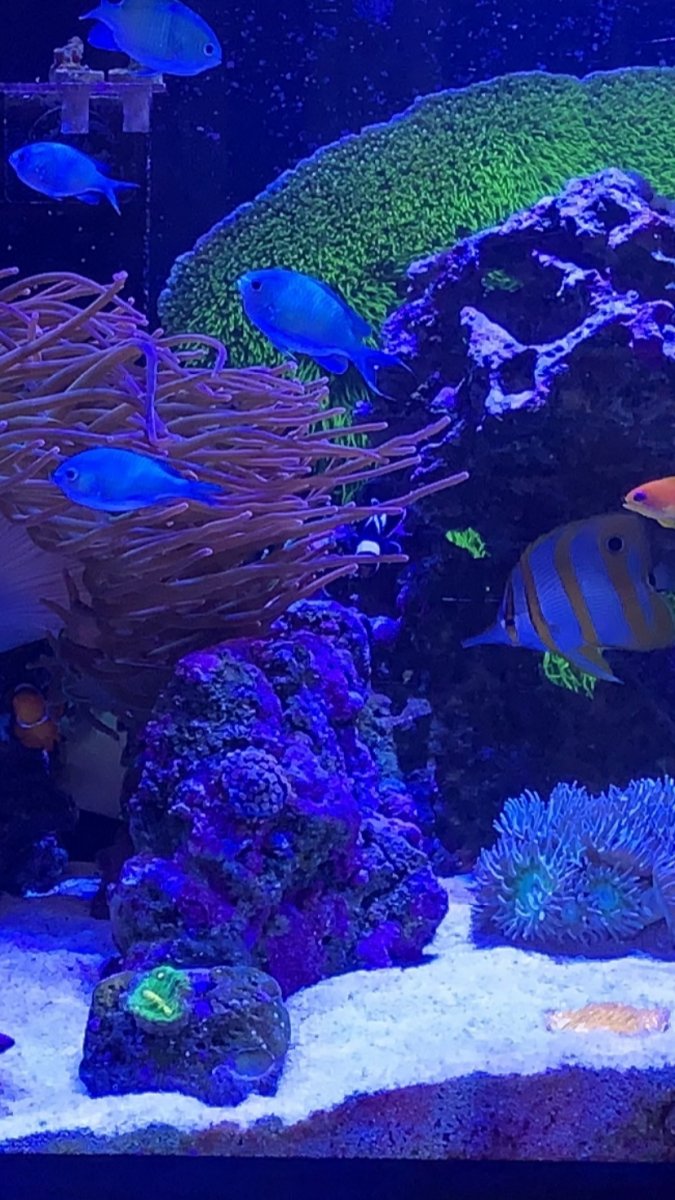 Increased WC schedule and adding more CUC including a Sea Hare. Unfortunately my Sea Hare got stuck in one of my vortex pumps, but I was fortunate to be able to take him out before he died in the tank.

I had some hair algae. Both rear panels 3' x 5' were covered with about a 1 to 2 inch thick coating. Prob give some people here heart attacks. It was never on the rocks. The rocks have a tiny bit of bryopsis. The lawnmover keeps the bryopsis groomed and you have to look closely to find some. The hair algae met its match when the sea hare arrived. Now the tangs dont have much to pick at. 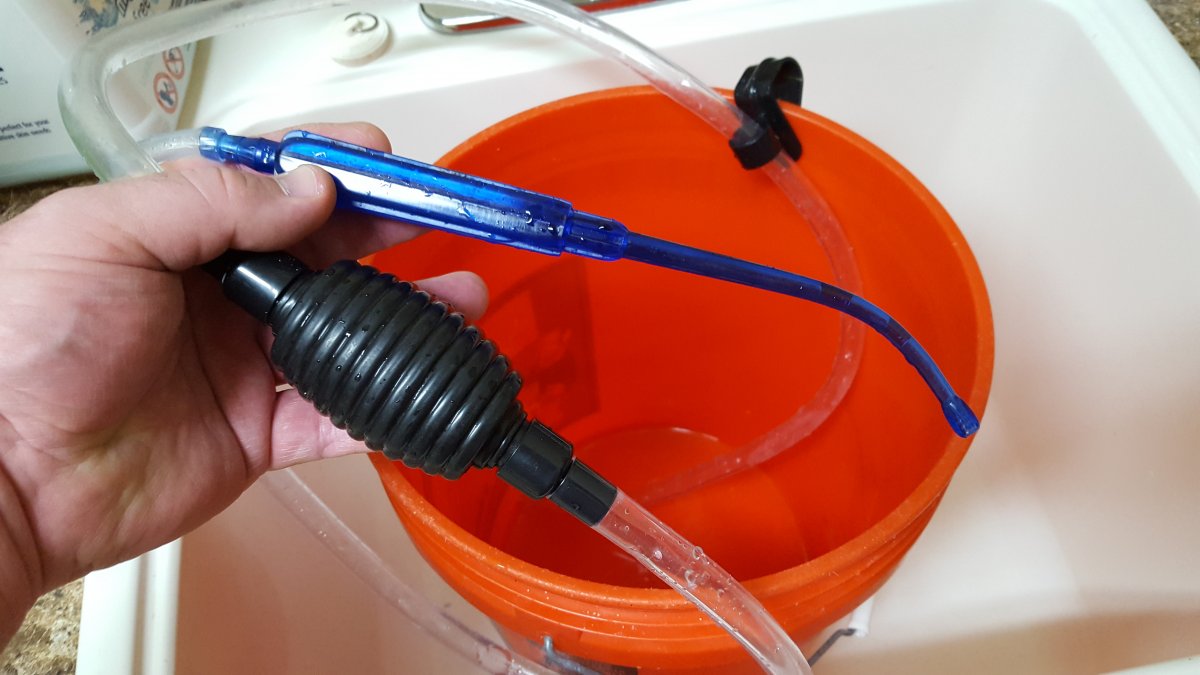 Only time I deal with any algae is in my sump. Besides that I never have it in the display. Only algae I get in the display is bubble algae. Letting the bubble algae build up and will add in some emerald crabs when I feel it is enough to keep them fed.

I had a little bout early but as I stocked my large tank with tangs and lowered my white lights and increased blue, all has been good....in fact I would like to produce a bit more algae as I have allot of grazers who really enjoy nipping at the rocks of my FOWLR...
A

Sea Hare. I dont suggest it unless you have 4 local reefers as they will have your tank spotless within 2 weeks and then die after 3. Once the tank is clean, ship him off to the next person. Once everyones algae in control, give him to your LFS.